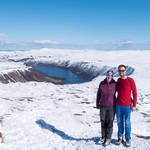 Having had a number of days out walking, where the snow was generally excellent we decided to make the most of the beautiful forecast on Easter Sunday by heading over to the east to complete the Lochnagar Circuit. The circuit is long with around 28km of walking which includes 5 Munros, so we didn’t want to be attempting it with deep snow. It was a very cold morning, with temperatures of -6 degrees according to the van, we had to scrape frozen condensation off the inside of the van! What the cold morning did bring, was a beautiful clear sky and hard frost. Soon after we set off we realised that the east had had far more snow than the west in the previous few days, and it became apparent that the day wasn’t going to be a quick romp along frozen high on the plateau. The walk in towards Lochnagar was beautiful in the sunshine, as there was no wind we couldn’t hear anything over than our steps in the crunchy snow and the grouse flying around. We were amazed when we got to the col before the final. Read the full article… 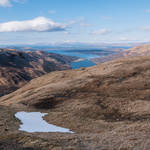 With tired legs and a less good forecast we decided to climb Beinn Sgulaird, a single munro above Glen Etive. Despite being a single Munro it was still a fairly long day, as the climb followed a long ridge line with plenty of undulation. The morning was beautiful which provided us with great views towards the Glen Coe hills, and south towards the Cruachan range. The ridge itself would have been very enjoyable had it not been so cold in the wind, and my legs not having been so tired. Unfortunately as we approached the summit bad weather started to come in, and despite our summit not being in the cloud our views were restricted due to the Glen Coe hills and Glen Etive being in a snow shower. After quick stop at the summit, we made a hasty retreat to get off the high ground before the weather deteriorated. As were were descending the weather progressively got worse, but we mostly stayed out of the precipitation. 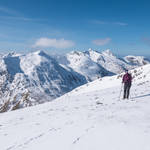 Chasing the elusive Scottish sunshine, we headed over to the west to climb Beinn a’Chochuill and Beinn Eunaich which are two Munros next to the Cruachan range. Trail magazine used the following two phrases in the description of the walk: Their lofty curving ridges give spacious views across to the pointed peak of Ben Cruachan and the rest of the central western Highlands A traverse of these two hills is a veritable menu of visual satisfaction that will certainly satisfy most palates. So get your axe out and tuck into this sumptuous hill feast. These descriptions made the views from the tops sound outstanding, and a perfect pair to climb on a beautiful sunny morning. As the night was clear it was very cold, so we woke up to a very cold van with ice on the inside of the windows, but with beautiful sunny morning outside the van. On the walk in we discovered that it was calving season for the local highland cows, which delighted Becky. The initial walk up the valley was up a track which was fairly painless, but we soon arrived at the base of the. Read the full article… 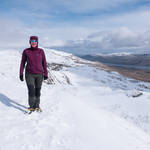 To make the most of the weather forecast we decided to head south east with the aim of completing the Tarmachan Ridge, which is the ridge high above Killin at the end of Loch Tay. The conditions were generally pretty good, with snow from around 550m. We had plenty of sunshine which meant that we had fantastic views for most of the ridge. The snow meant that we made quick progress once we were on the ridge, and we were privileged to have the ridge to ourselves after the initial Munro. Despite the easy access, we felt fairly remote while on the ridge, which combined with the weather made for a very enjoyable day. There was a slightly unexpected arete leaving the second top which was very exposed which was very enjoyable, as we decided from the second top the forecast bad weather came and and the conditions reverted to snowy, windy and cloudy. The descent from the final col took a lot longer than expected due to the soft snow, combined with the track being covered in yet more soft snow until we were within 2km of the car.