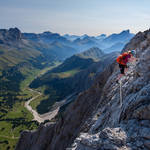 We have recently finished a brilliant holiday in the German Alps and the Dolomites. It was great to have a holiday with excellent conditions after the mixed year so far due to Coronavirus. This post contains a summary of the photos from the trip in 27 photos. We started the trip with a day trip into the Bavarian Alps from Munich, due to the next 2 days having pretty poor weather (and the only bad weather we had on the trip). Mittenwalder Höhenweg Klettersteig After a day in Munich we then drove down to the Brenta Dolomites to do a hut-to-hut trip through the high mountains. These via ferratas are very different to the rest of the Dolomites and can be best described as ledges and ladders in surreal positions. The two day trip through the mountains was incredible and is highly recommended. Brenta Dolomites Day 1/2: Sentiero Alfredo Benini & Sentiero Bocchette Alte Sunset, Astro and Sunrise from Rifugio Alimonta Brenta Dolomites Day 2/2: Via delle Bocchette Centrale We then had a relocation day to the central Dolomites. For the rest of the trip we based ourselves in the. Read the full article… 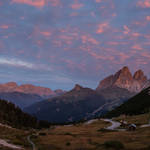 We were meant to be getting an early start to ensure we were first on the route, but despite my best efforts I could not avoid taking a photo of the stunning sunrise which occurred from the Pordoi Pass while we were gearing up. The first photo is taken handheld at high iso as I was still trying to not get the gear out, but eventually my resistance failed and the tripod came out for the second photo. Landscape photography does not get much more accessible than this, as they were literally taken from a tarmac car park! 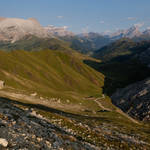 I again decided to carry my tripod and landscape photography gear with me up Val Duron to the Rifugio Alpe di Tires. Unfortunately this time was probably the least successful use of the equipment, however I still got some nice images. Thankfully this time we didn’t have climbing gear, or winter equipment and we had worked out what we really didn’t need to carry so out bags were much lighter. I didn’t manage to get out for sunrise due to having consumed a bit too much red wine the night before while socialising with some people we met in the rifugio. 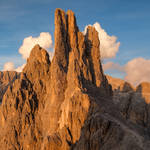 With the mixed weather while we were in the Rifugio Re Alberto I was unsure if I was going to regret carrying my tripod and landscape photography gear into the mountains. Thankfully there were some breaks in the cloud which led to some really atmospheric conditions, and I managed to time my brief break from dinner around sunset for the only time there was lovely golden light on the Vajolet Towers. Later in the evening I then had another go at some more astro photography, which was aided by the rifugio lights illuminating the Vajolet Towers which was a nice surprise. The next morning was a bit less fruitful, but it was still a nice way to start the day, and I managed to get a few pictures which capture the sunrise.