After a brilliant day on Sharp Edge the day before we weren’t sure that we were going to be so lucky today. Thankfully when we were woken up we were treated to another crystal clear sky, although this did have the downside that it was -5 in the valley which had made the van a bit cold… 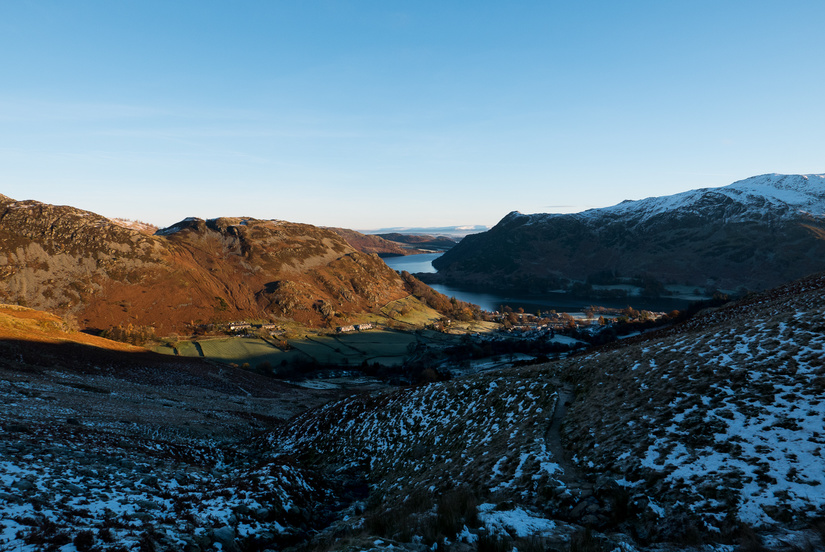 After we had thawed out we started the walk in a little bit later than planned, which was unfortunate as we had planned to set off early to try and avoid meeting any unprepared people on the route. The start of the walk was very cold, but the ascent up Myers Beck soon warmed us up. As we ascended the view along Ullswater just kept getting better with the combination of the frosty valleys, sunlit heather slopes and snowy mountains. 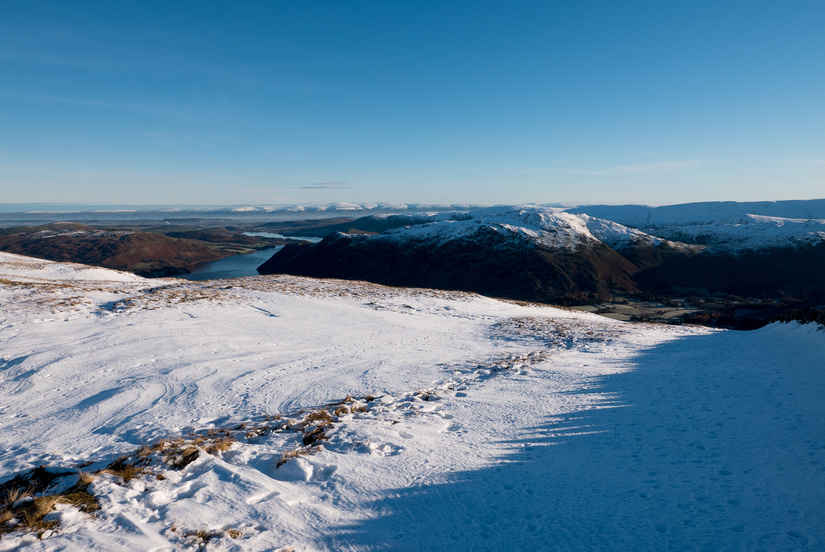 After the shady ascent up Myers Beck it was a relief to climb into the sun and see the first view of Helvellyn, and it just looked outstanding with it’s winter coat and the clear blue sky. We were soon on Striding Edge and decided to put our crampons on at the start, as it was likely that we were going to need them. While it would have been possible to do them without, it wouldn’t have been the best choice, as the party of 4 in front of us with no winter kit and three season boots were finding. We caught them up before the final scramble down, which was made a tad stressful due to being behind them as they looked very uncomfortable on the icy snow. 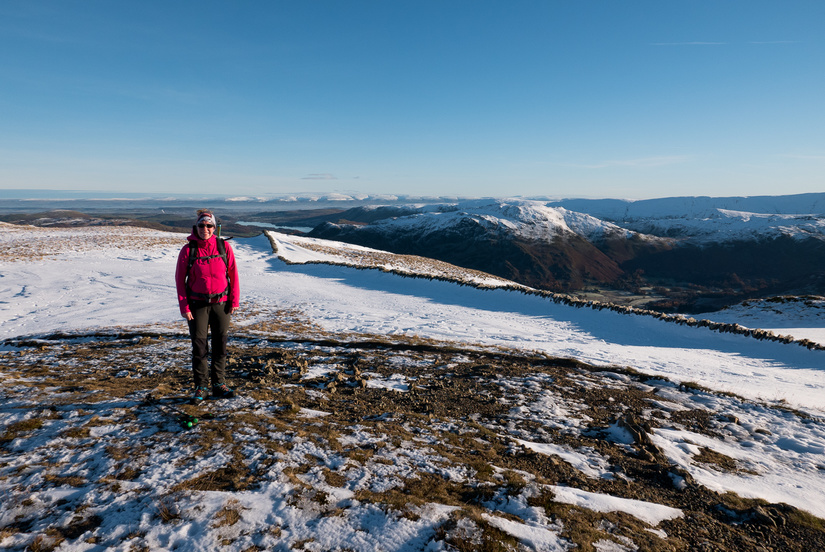 Happy to be out 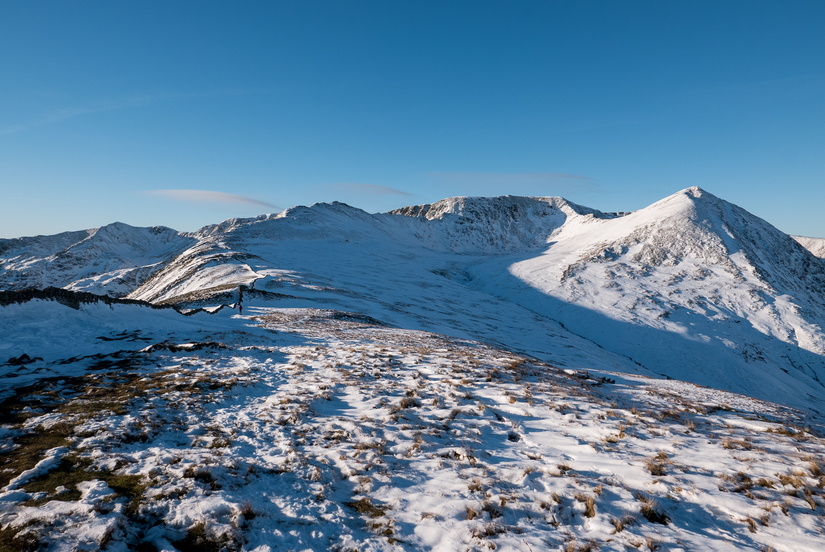 Amazing view of the day ahead 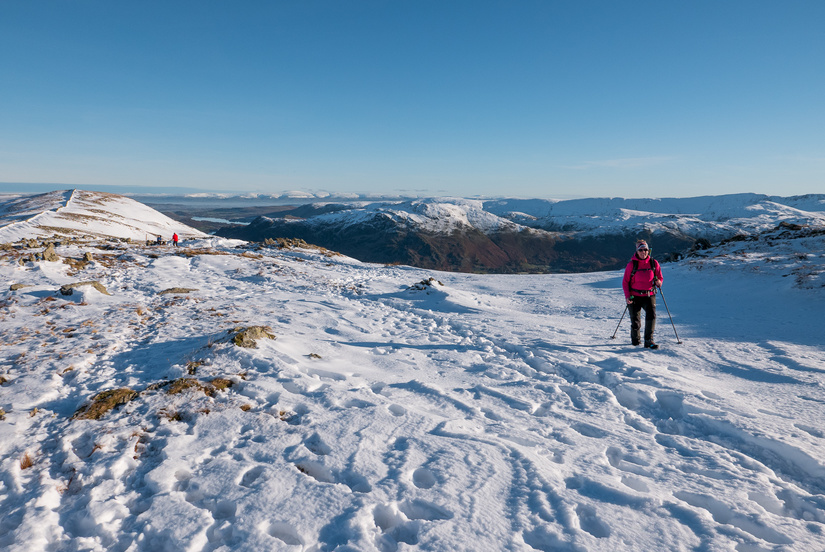 Walking up towards Striding Edge 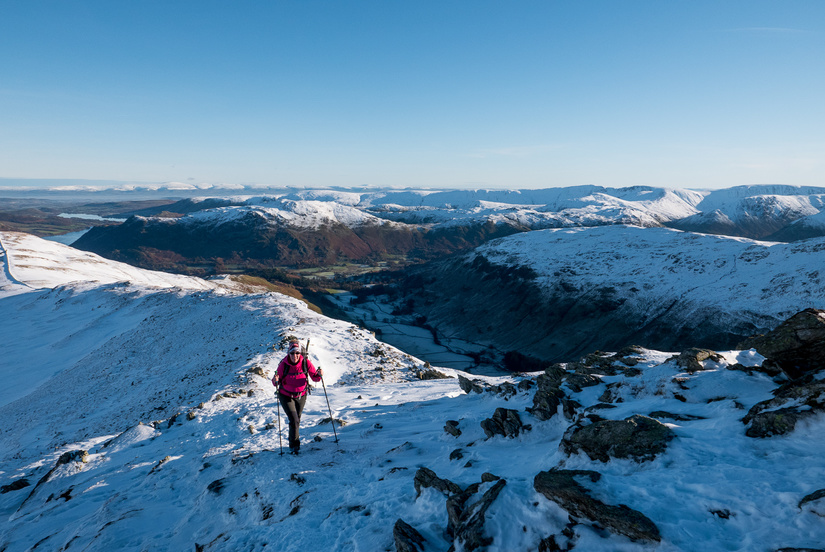 Approaching Striding Edge with High Street in the background 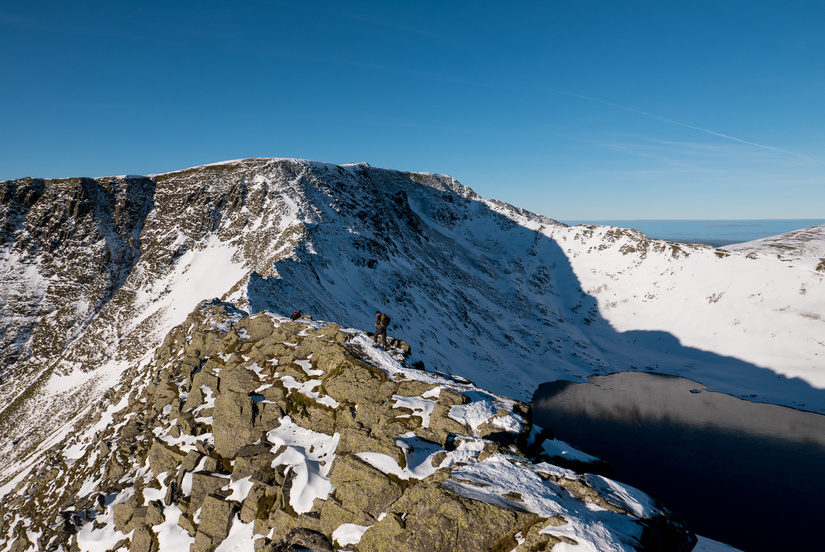 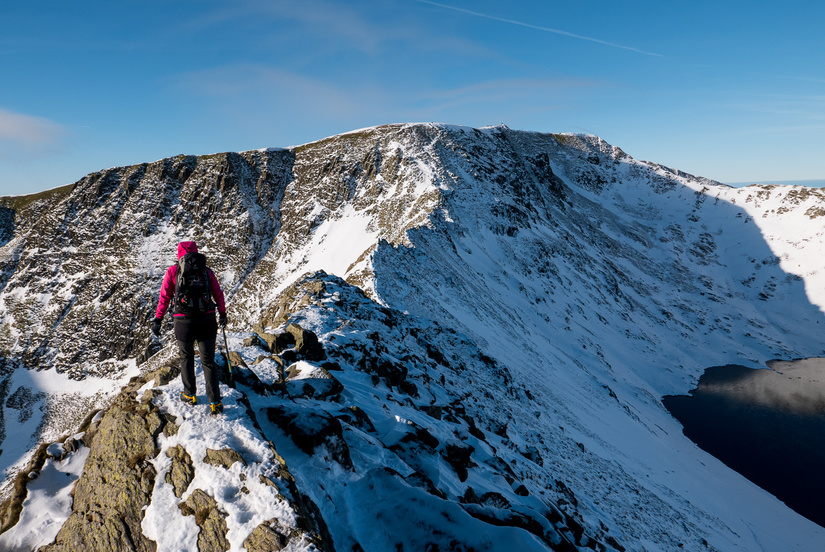 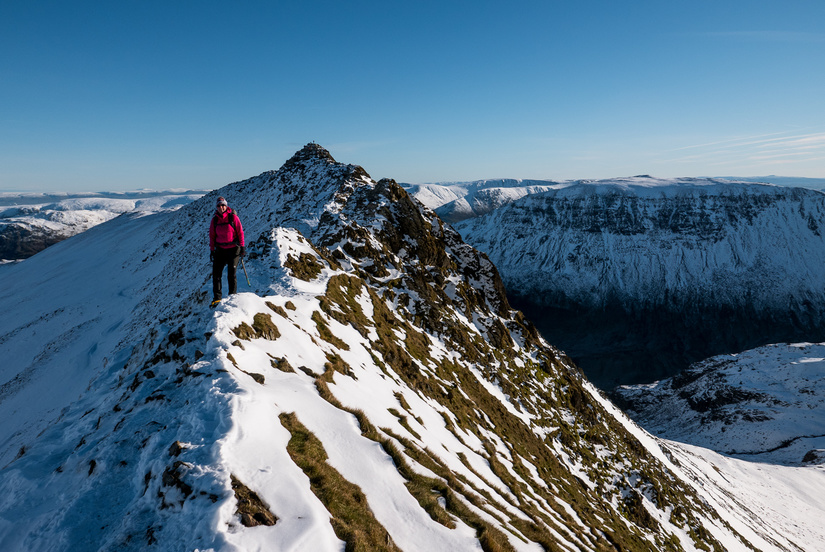 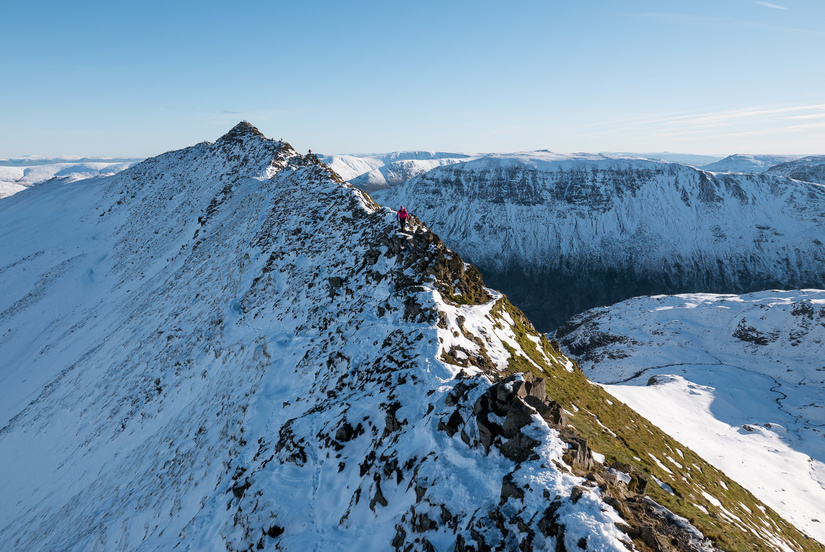 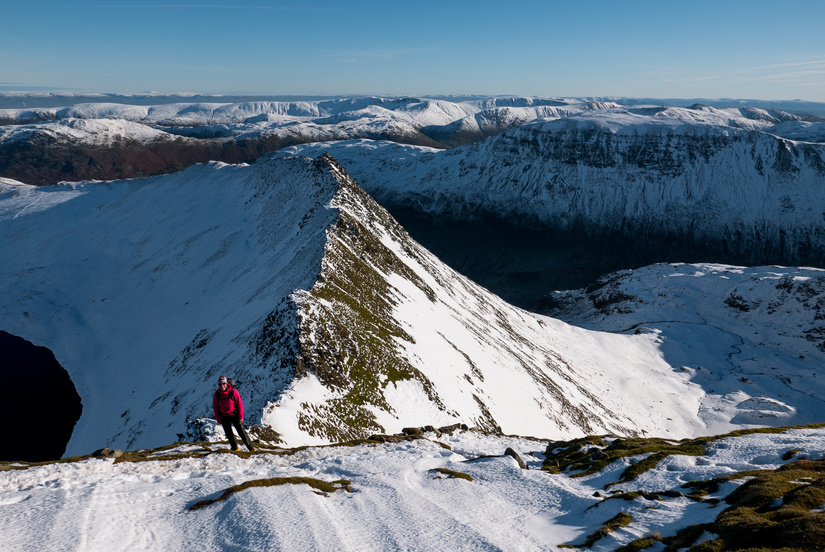 On the final slopes up to Helvelyn

After the final steep slope we were at the top of Helvellyn and in the crowds of people enjoying the fine November day, we did have to advise a team in trainers and shorts that descending striding edge may not be a very good idea… Unfortunately it wasn’t quite as good as the previous day as there was a strong, cold wind on the summit which meant that we didn’t hang around for too long. Looking down Swirrel Edge in the shade was fairly imposing and it was surprisingly icy given the temperature inversion which had been softening most of the snow up high. 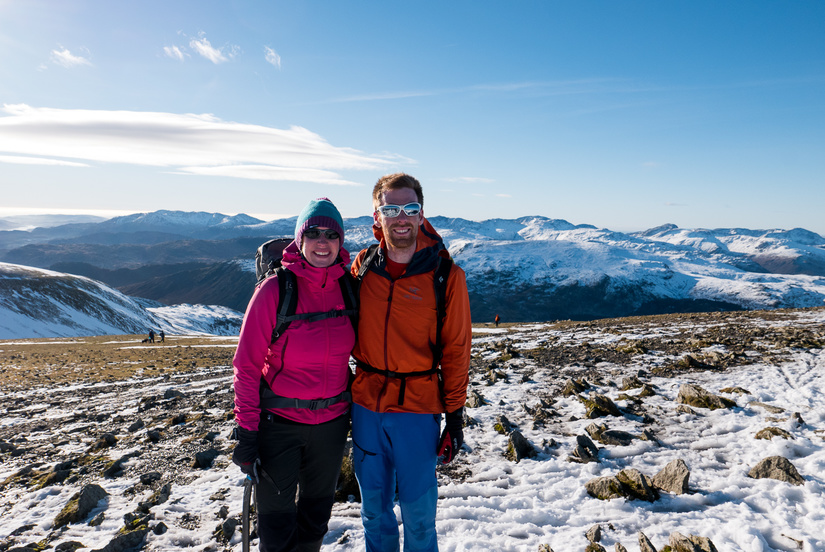 Becky and me on the summit 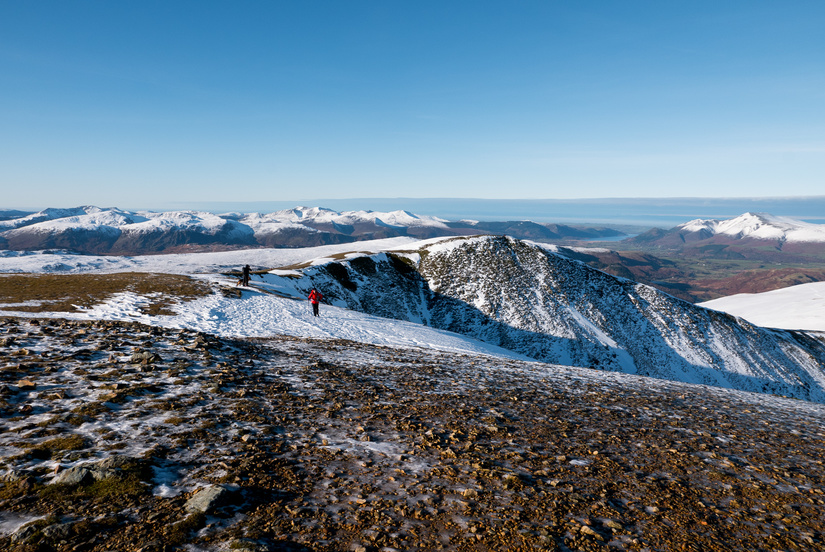 Looking towards Raise and Keswick 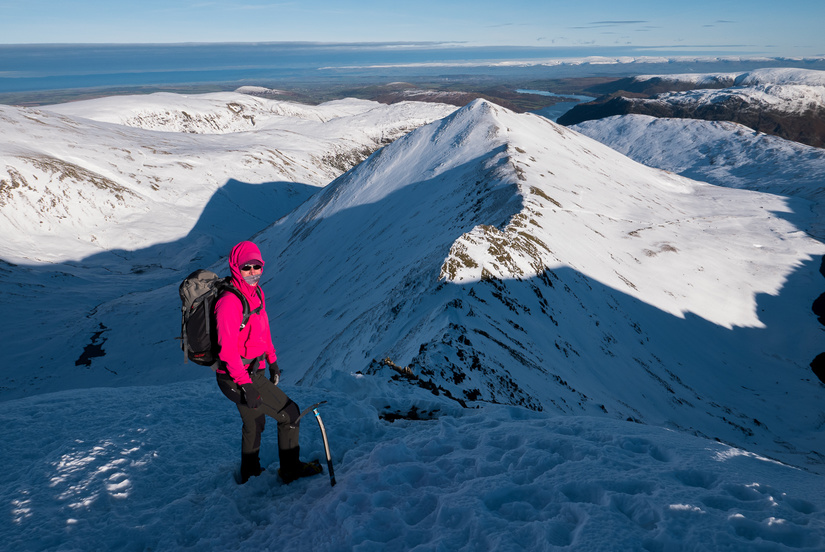 Becky about to descent Swirrel Edge

After a quick descent down Swirrel Edge we decided to make the most of the day and finish it off by climbing Catstye Cam. After the quick ascent we bumped into some skiers who were having a very good day out and equally enjoying the start of their season. After a quick descent directly down to the main path we started the long descent, which always seems to have one more corner. 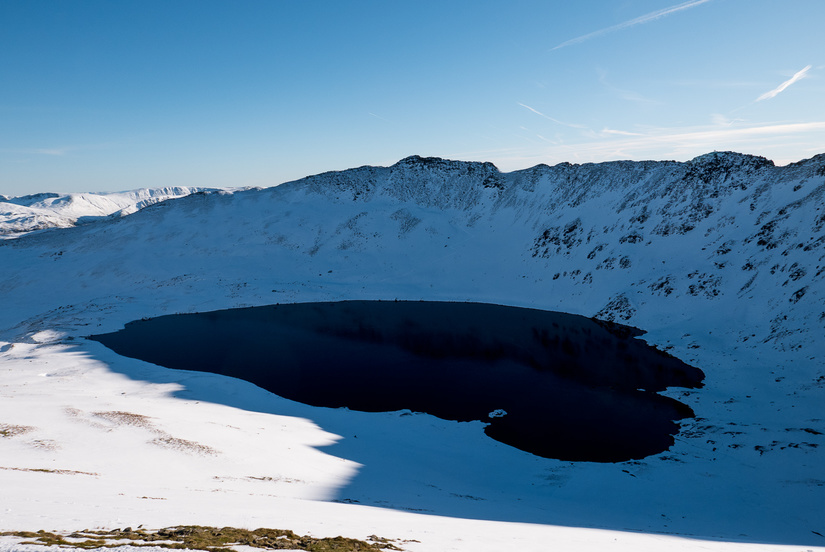 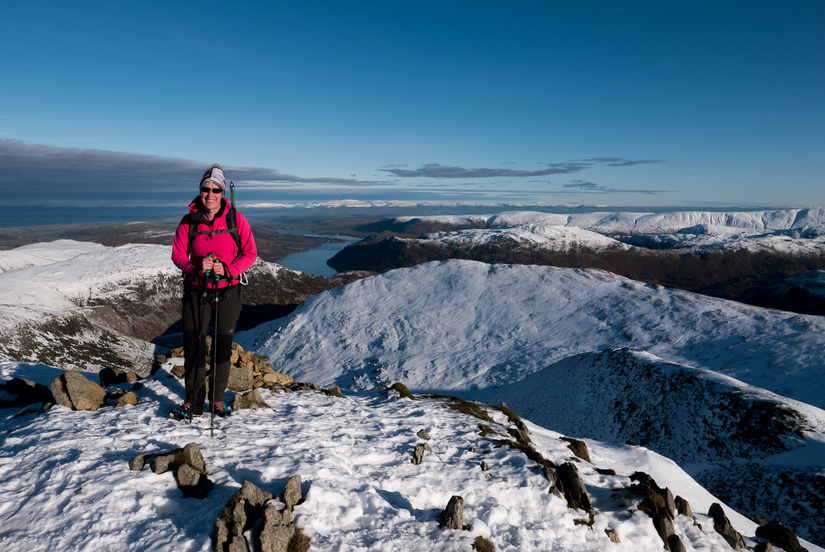 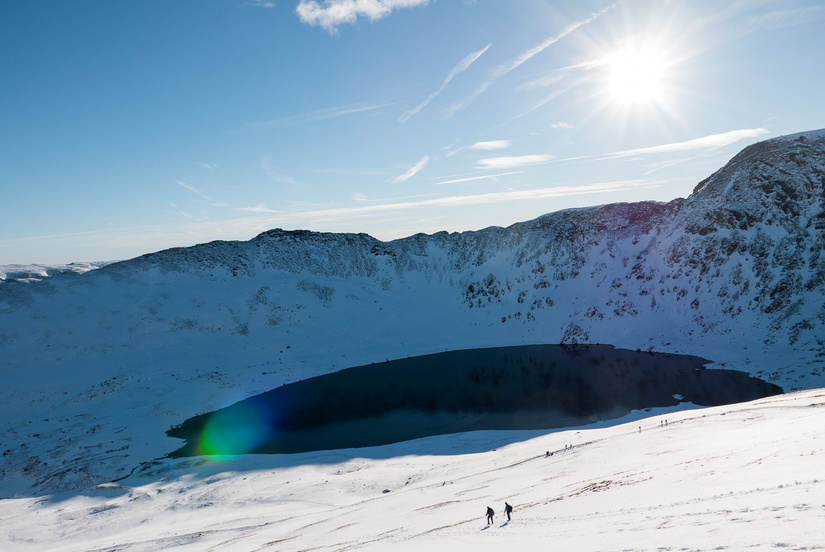 A team descending from Catstye Cam