Last weekend and the start of this week was characterised by heavy rain and cold conditions in Bristol, which meant that in the Lake District the mountains were developing their first significant winter coat of the season. As the week continued a high pressure system started to build, so Becky and I decided to take a day off work and head up to the Lake District for a long weekend.

On Friday morning we left Bristol at 6am hoping for a clear run up the M5 and M6 in order to get to the Lake District in time to climb Blencathra via Sharp Edge and descent via Hall’s Fell ridge. Thankfully we made good time, and by 11am we were in a lay by near the start of the walk into Sharp Edge with cold and and crystal clear blue skies. 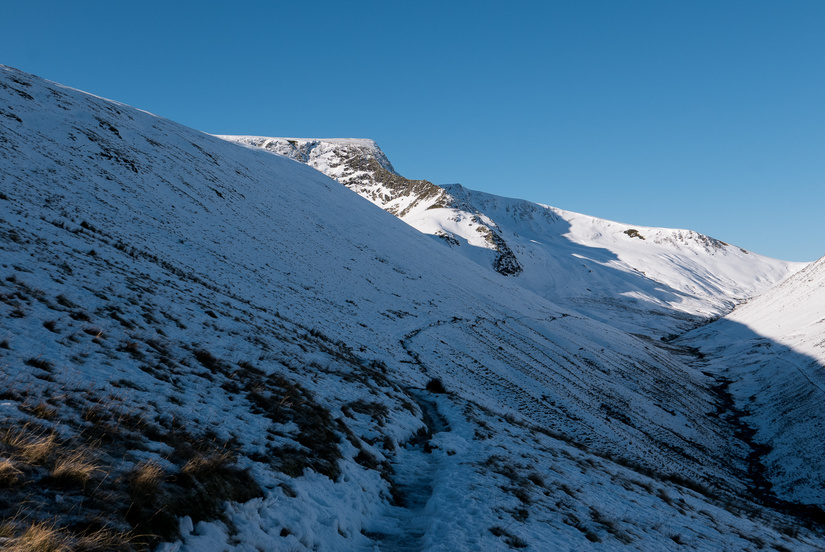 Walking into an alpine Sharp Edge

The walk in was beautiful leaving the green sunlit valley and climbing up in the warm sun, we soon arrived at the first col and left the sunlight behind and the temperature plummeted, but we were treated to a fantastic view of Sharp Edge being illuminated by the sun. We were thankful for the people who had gone before us and left a good set of footprints in the path, especially while ascending to Scales Tarn. 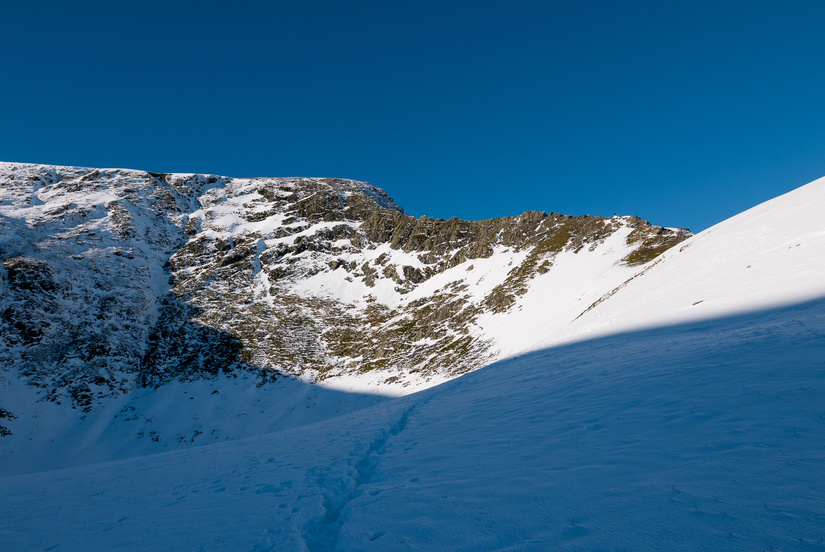 The ridge was in brilliant condition with a nice mixture of snow which wasn’t icy and rock. Due to the sun having melted the snow a bit we didn’t need to put crampons on, and we were able to make good time up the ridge. Unfortunately this meant that the fun was over far too soon, however it did mean we were treated with the spectacular views from the top! 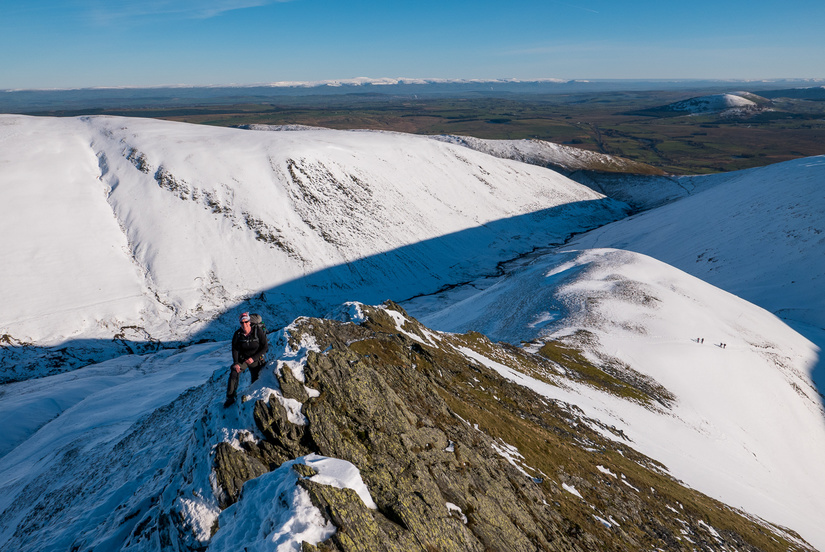 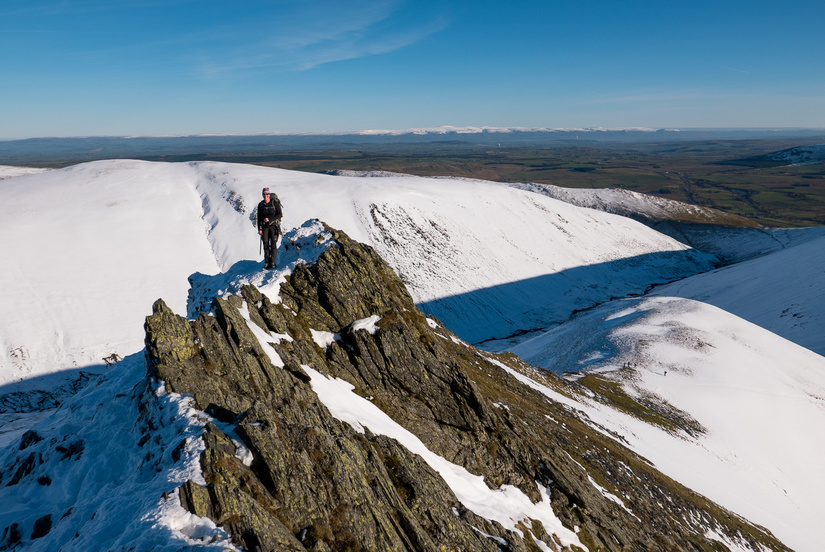 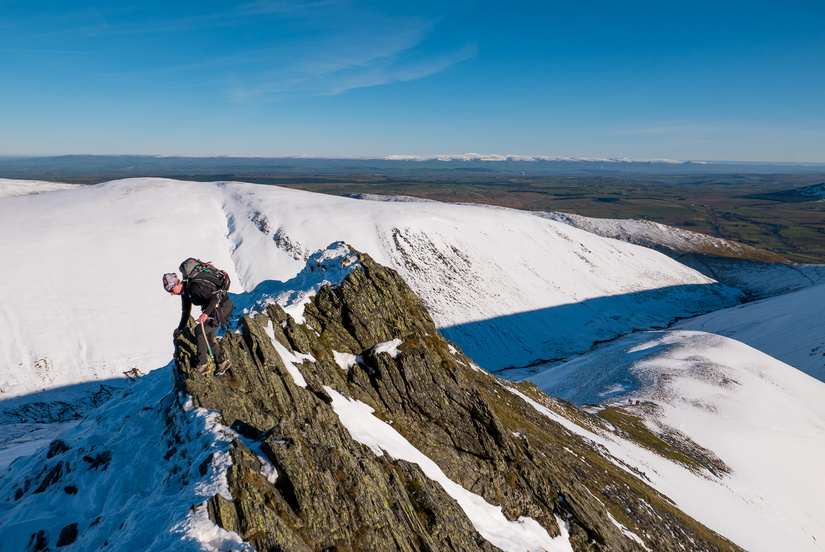 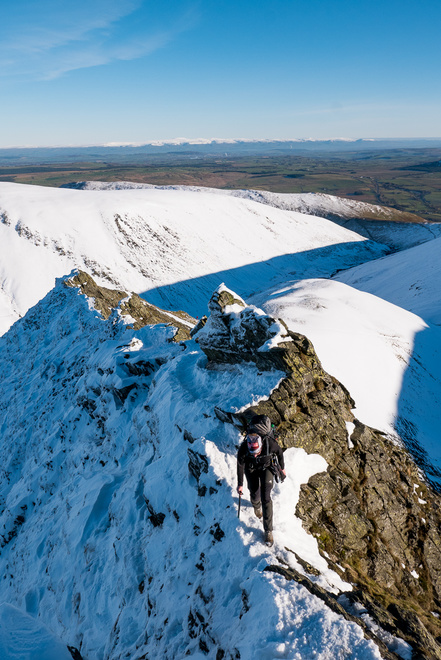 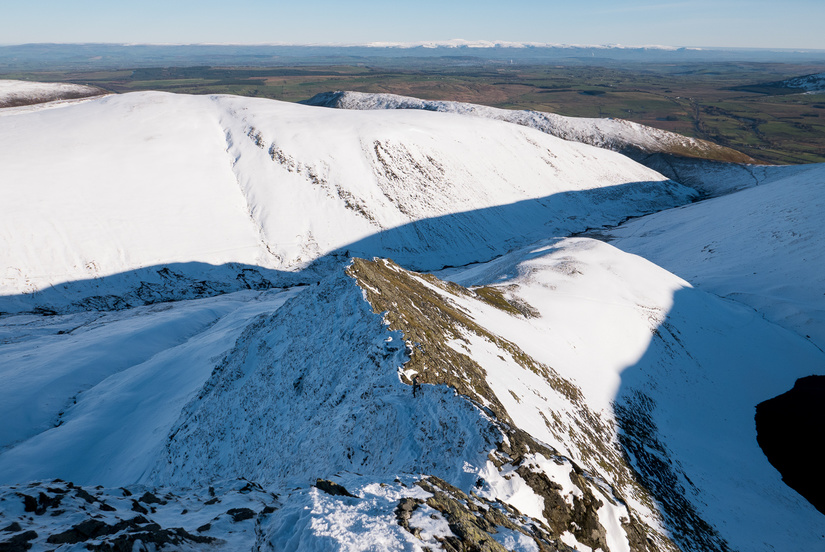 A ridge of two halfs 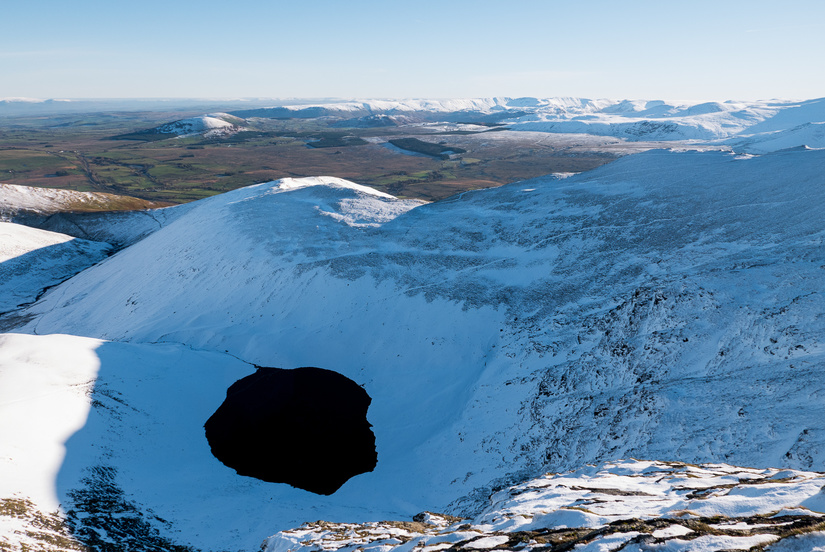 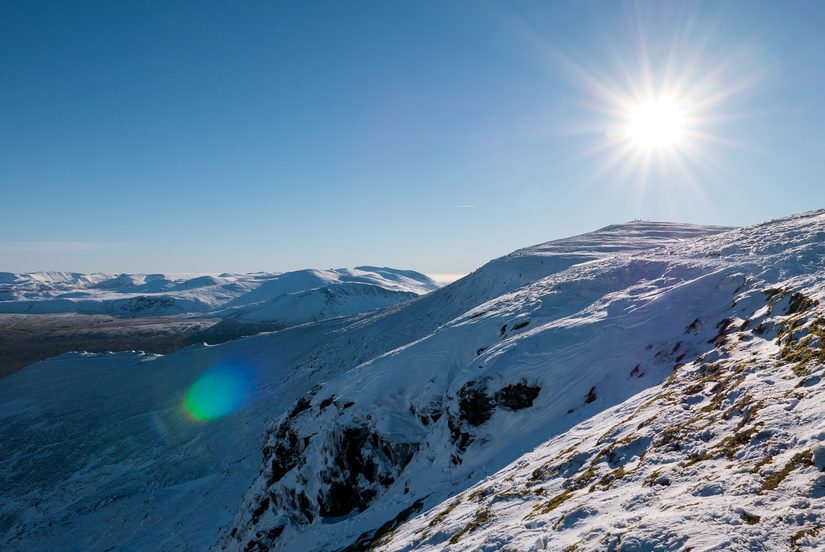 Looking up towards the summit of Blencathra

It was so enjoyable being on the summit, with no wind, sun and brilliant views we were able to enjoy eating out lunch on the summit. We had excellent views of all of the Lake District summits, the northern Pennines and southern Scottish mountains. Due to it being early in the season the views were enhanced by the lush green valleys. 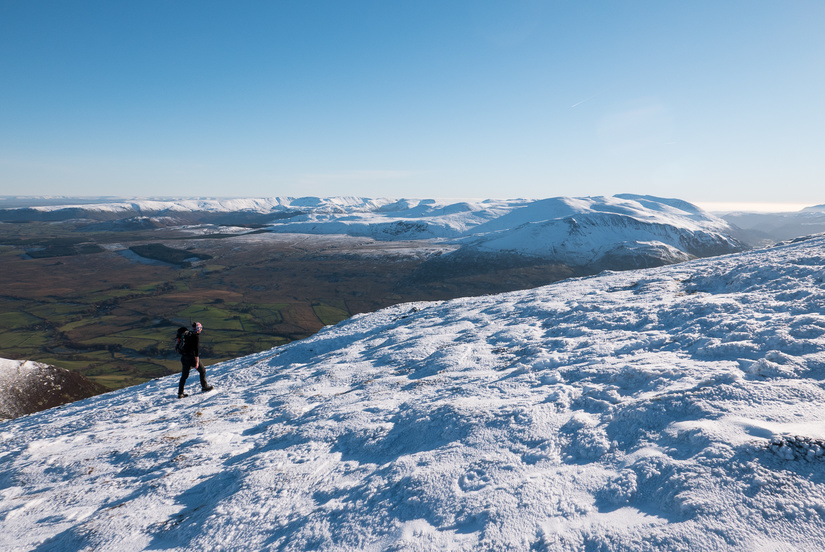 Stunning panorama from the summit 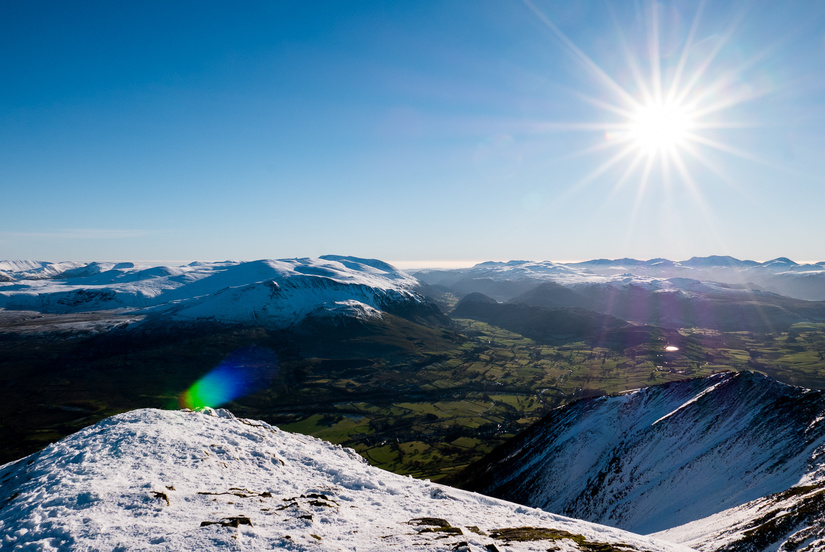 Looking south from the summit 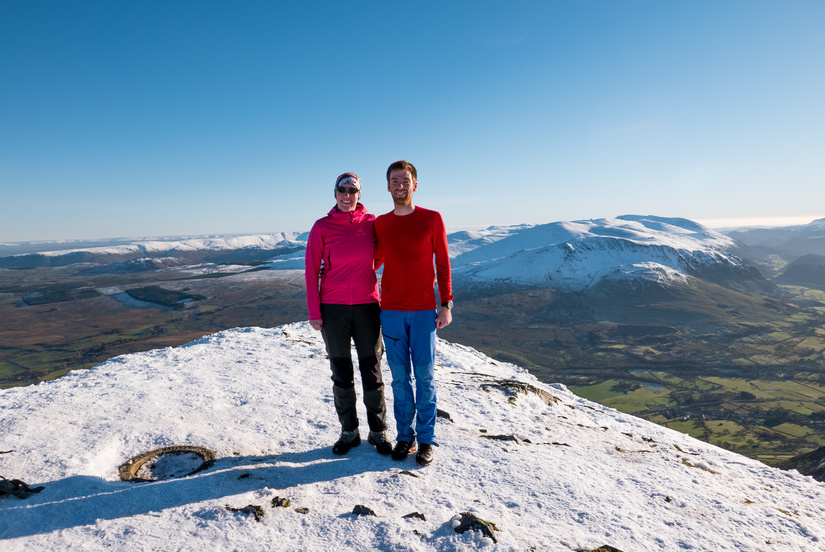 We descended via Hall’s Fell ridge, which is normally an enjoyable scramble. Unfortunately it had a slightly annoying amount of snow on it, as there wasn’t enough snow to warrant crampons which meant that the snow just slowed progress. We descended as the sun was setting which produced a beautiful end to the day as the setting sun lit up the snow covered mountains. 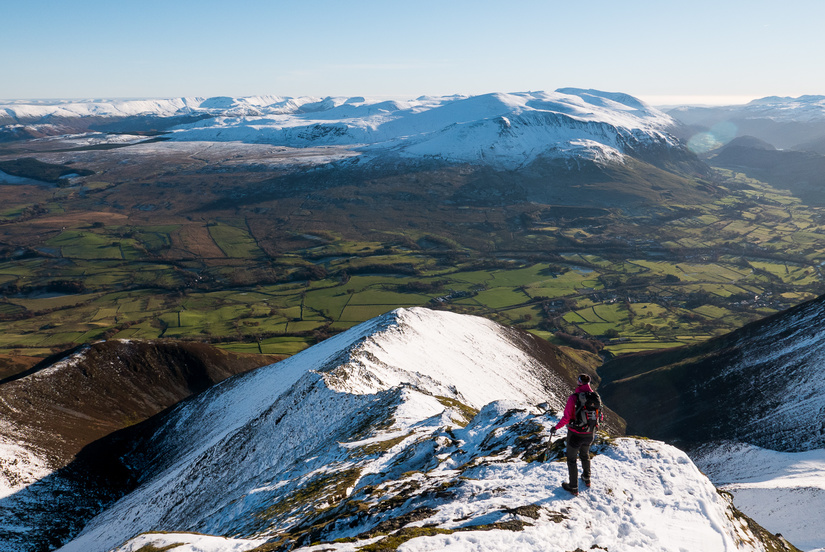 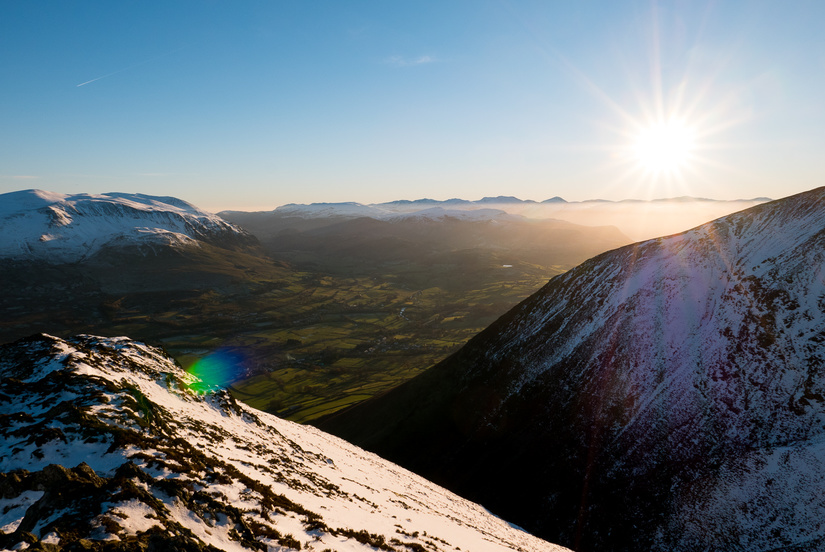 One Response to “Alpine Sharp Edge”