Due to a last minute change of plan I ended up joining Becky and David on their alps trip. As they had just spent a week in the Monte Rosa this provided a challenge due to my lack of acclimatisation. For the past few years I have always acclimatised reasonably slowing, which meant I had no idea how well I would cope with going up high quickly.

As we had a four day weather window Becky and I decided to head up into the Bernese Oberland from Fiesch and climb some mountains while heading to the Jungfraujoch train station where we were going to meet Dave to climb the Mönch and Jungfrau. This enabled me to get up high, but while staying relatively low at 2850m.

The first day involved a long glacier walk up the Aletsch Glacier to the Konkordia hut at 2850m. The Aletsch Glacier is the largest glacier in the Alps, and walking up it certainly made us feel very small and insignificant while we were surrounded by such a large expanse of ice.

The walk up the glacier seemed to take forever as you can see the hut 6km away as soon as you get onto the glacier. There were a few points on the glacier where it was very crevassed and we seemed to make no progress for a long period of time as we zig-zaged back and forth. Due to these crevassed sections the walk in took slightly longer than expected and we turned up to the hut 4 mins before dinner.

The Konkordia hut was fantastic as it was a fairly modern hut which was run by a friendly family who gave us excellent food. The main course on the first night was wild mushroom risotto which was just fantastic. 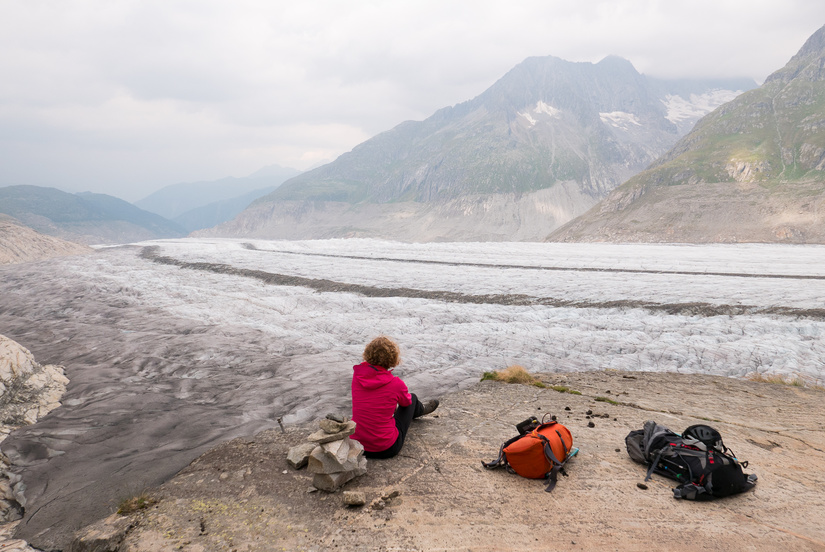 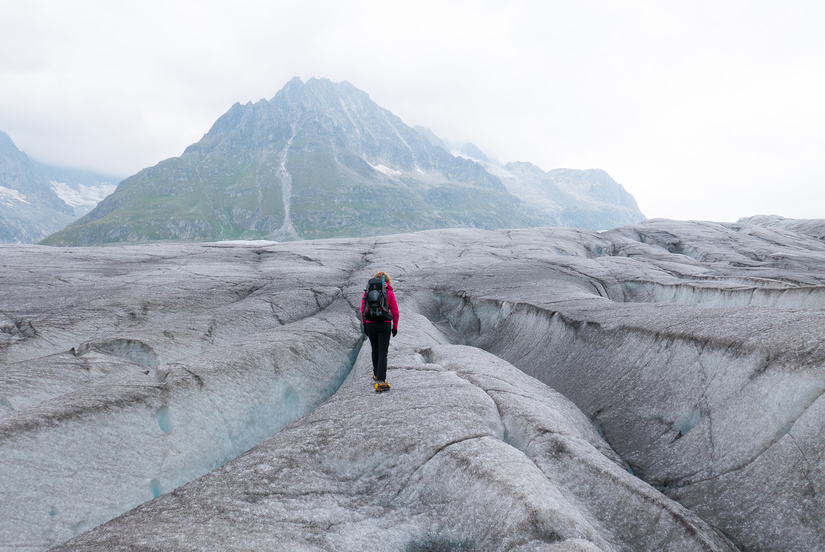 Heading for the medial morain 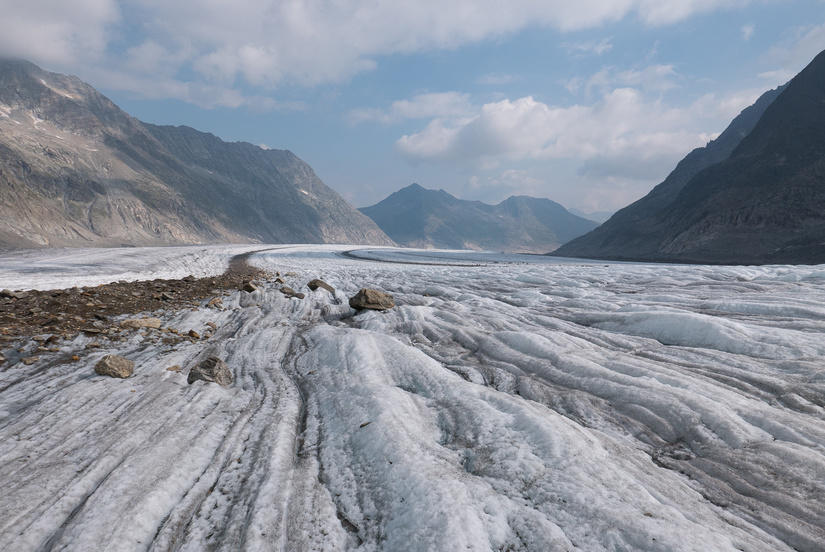 Feeling small looking down the Aletschgletscher

The original plan for the second day was to climb the Gross Grünhorn via the Grünegghorn. The initial walk up the glacier in the morning was fairly straightforward thanks to the glacier being dry and crevasse free, in the dark the steeper glacier up to the ridge looked very imposing with lots of massive crevasses but it was possible to follow lines of good snow up to the top.

After avoiding the very open bergschrund by climbing a short section of loose rock, we were soon on the ridge up to the fore summit of the Grünegghorn, unfortunately while climbing this ridge I was increasingly suffering with altitude. By the time we got to the fore summit I was really suffering and we made the decision to head down rather than continue up to the main summit.

The view from the fore summit were fantastic. In addition to all of the Bernese Oberland peaks we could see over to the Monte Rosa peaks, the Matterhorn, the Weisshorn and Mont Blanc.

Thankfully as we descended I started to improve and by the time we were back down on the dry glacier I was feeling fine. We soon had the last challenge of the day, the 160m of steps up to the Konkordia hut which seemed endless while climbing them! 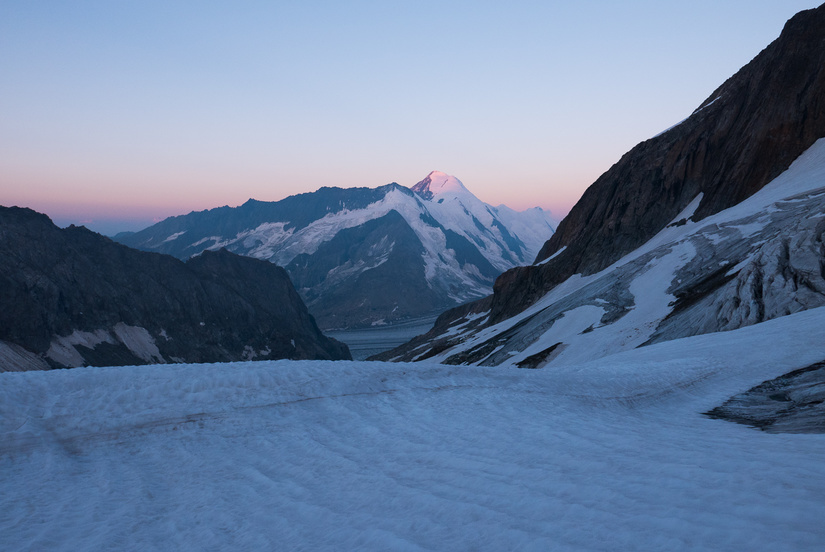 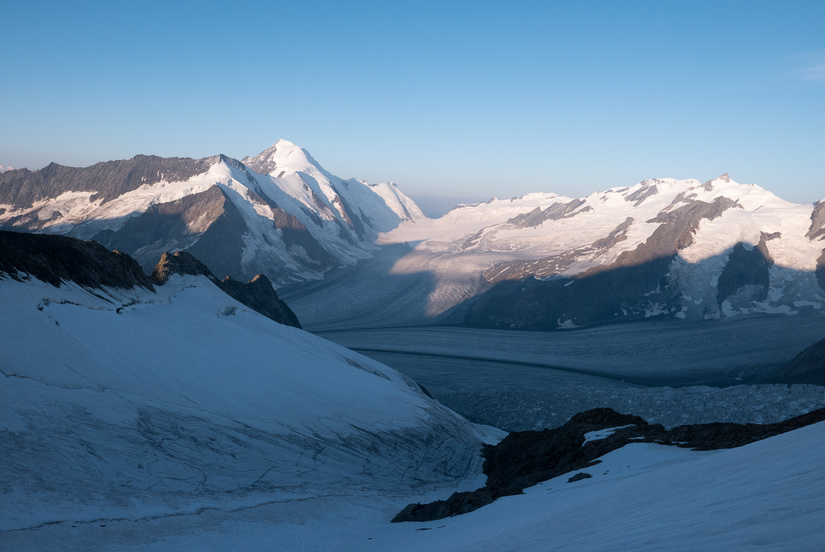 Dawn light on the Aletschhorn 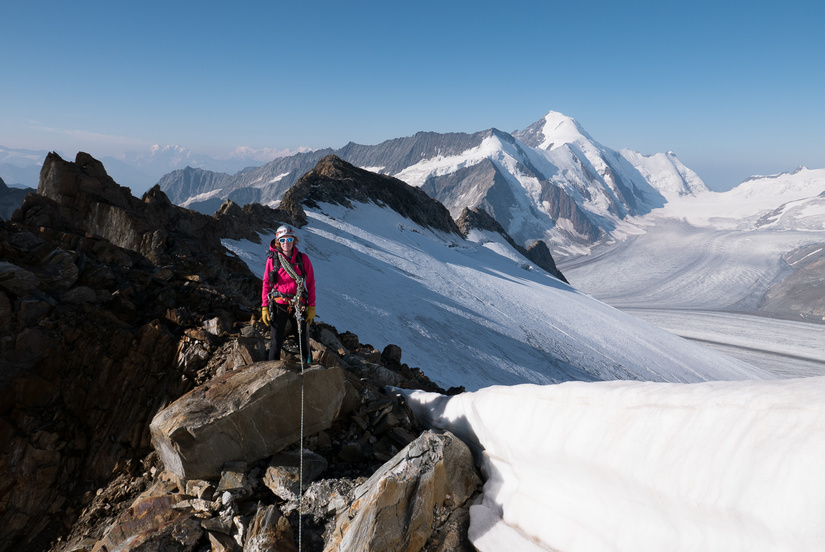 Stunning views of the Aletschhorn

Lots of water flowing on the Grüneggfirn

Stunning scenary around the Konkordiaplatz

Due to a slight change in the weather forecast towards the end of the week, we decided to head up to the Mönch a day earlier than planned. This meant we had a long walk up to the Jungfraujoch in the morning to meet Dave.

Walking across the Konkordiaplatz in the dark in the morning made us feel very insignificant, apart from having to negotiate a large river we made good progress up the dry glacier and were soon enjoying the first signs of morning light down the Aletschgletscher.

Our progress somewhat slowed down as we got to the wet glacier, as it was very crevassed and covered in lots of small and weak snow bridges. After over an hour of nervously meandering through the crevasse field we were very thankful to see smooth glacier in front of us. While walking through the crevasse field, we both ended up with our legs breaking through snow bridges, at one point both of my legs went through and all I could see below me was a dark abyss.

We arrived at the Jungfraujoch before the first train, but due to getting lots in the station and a communication failure, we managed to miss Dave who then made his way to the Monchjoch hut. After we had managed to establish this, we headed off to the hut to dump kit we didn’t need and meet up with Dave. 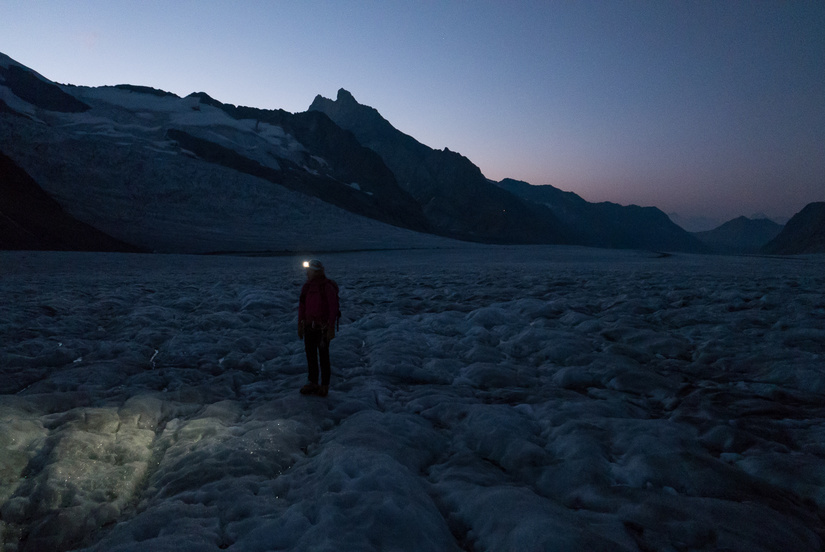 Crossing the Konkordiaplatz in the dark 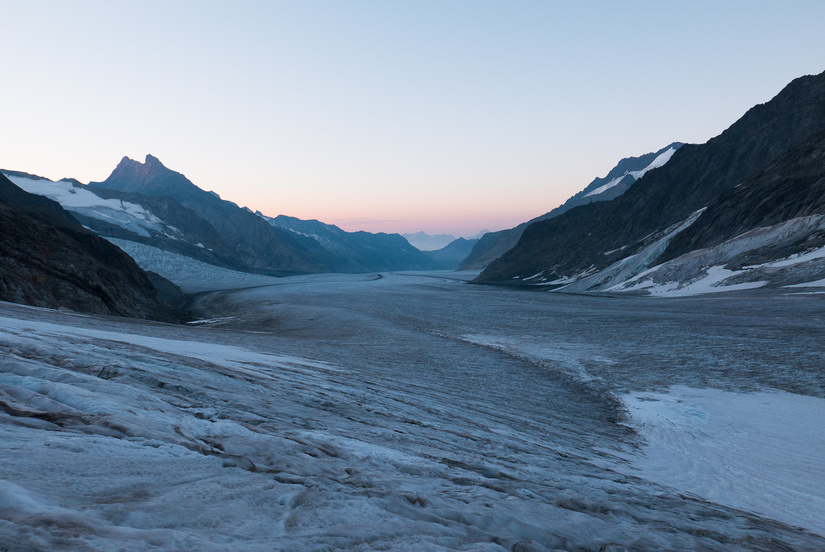 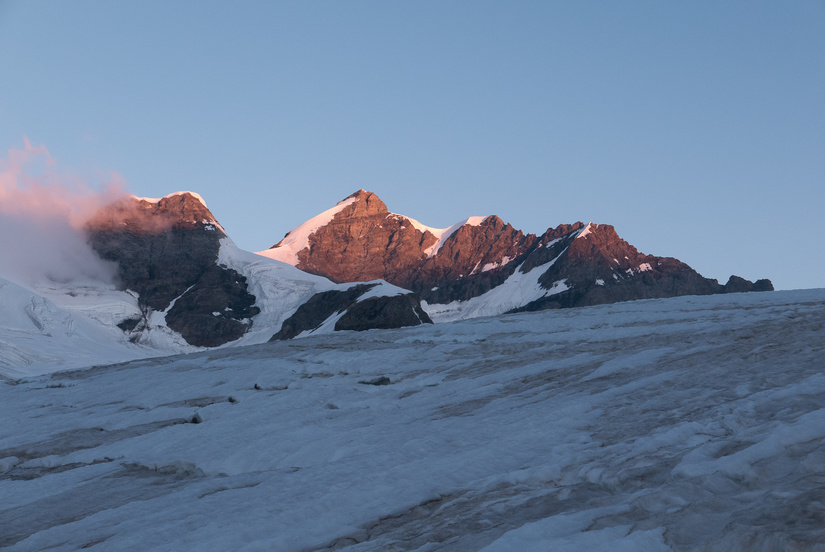 Dawn light on the Jungfrau 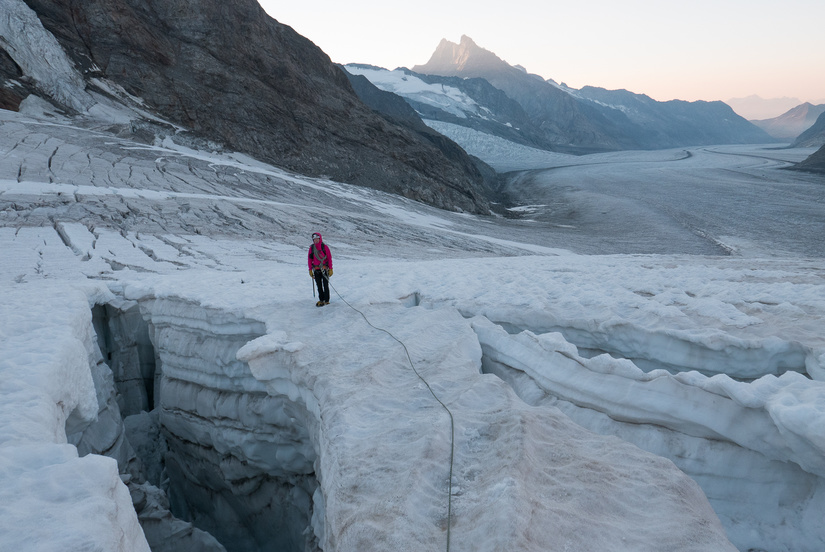 Large crevasses on the Jungfraufirn 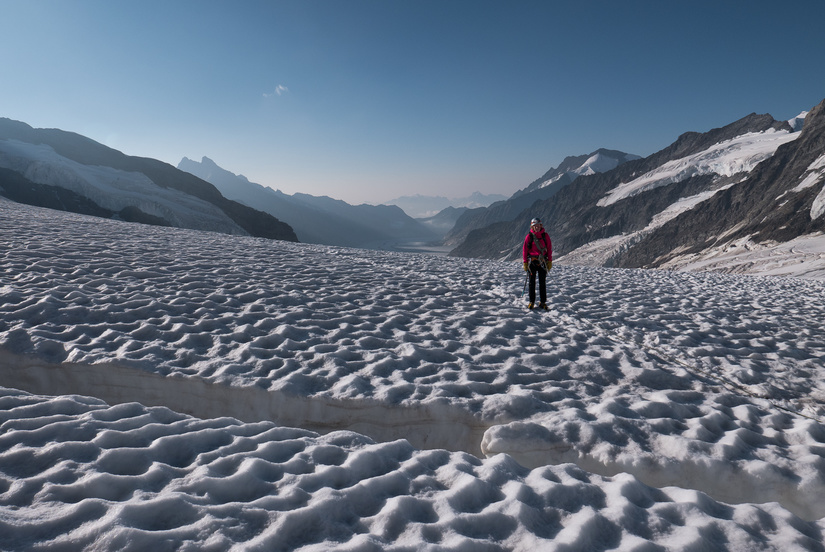 By the time we set off to do the route it was 11am, which is certainly the latest I have ever set off up an alpine route. We made excellent time up the ridge, overtaking a number of parties and were soon at the start of the final summit arête. This arête was outstanding as it was a long knife edge ridge with breathtaking exposure down both sides. We were pleased to get to the summit in just over two hours which as well ahead of the book time and I was pleased that I didn’t suffer at all with altitude after the problems from the previous day.

On the SE Ridge of the Mönch

Approaching the summit arete on the Mönch 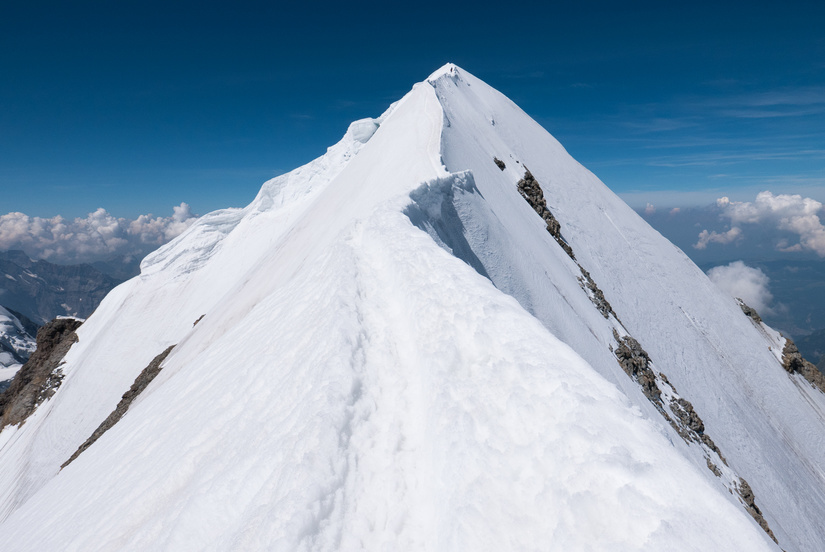 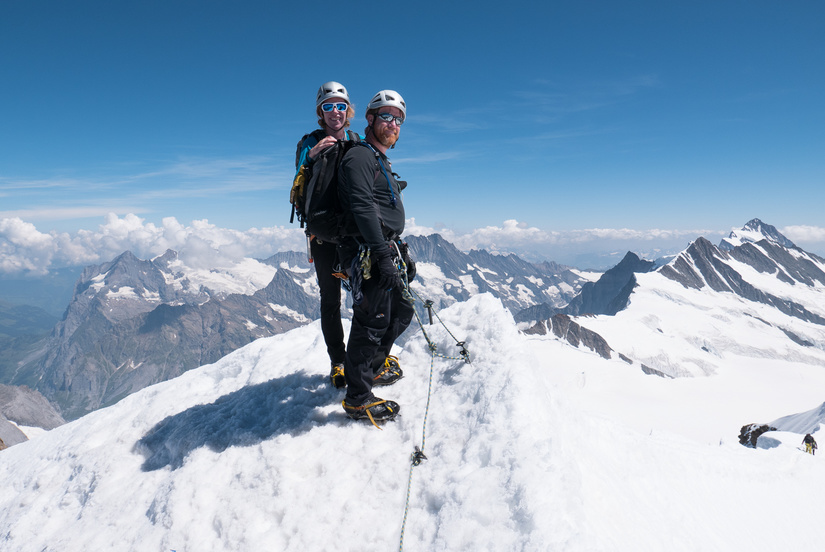 Me on the Summit of the Mönch 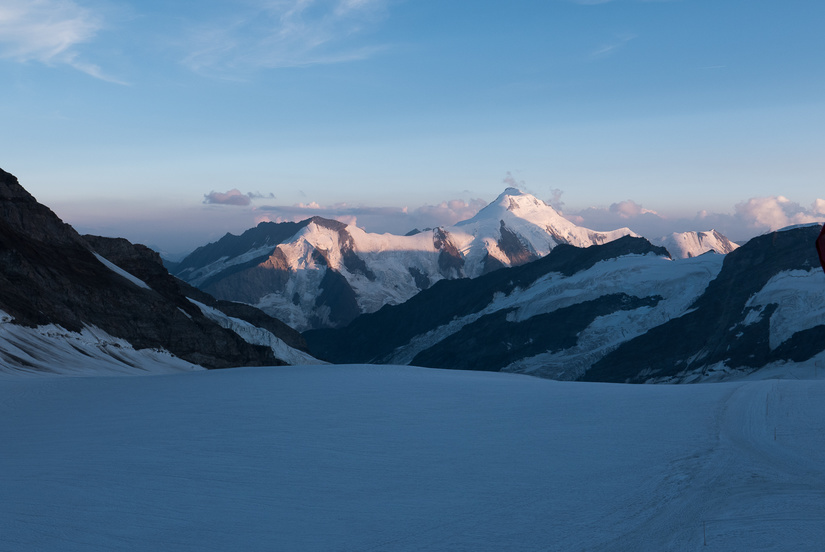 Evening light on the Aletschhorn

Day 4: Walk back to Jungfraujoch

Becky and I had a very long day so were feeling pretty tired, the forecast looked like the weather might crap out and the route up the Jungfrau looked visibly icy from a distance. Due to these reasons we decided to just head back to the train station on the last day, and head down into the valley for a much needed shower and a well deserved meal out. 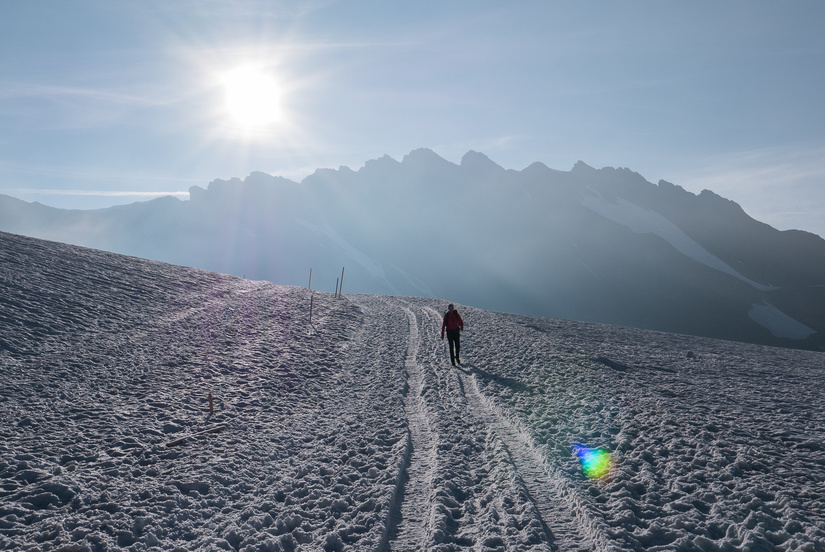 Walking back to the Jungfraujoch

It was very surreal having spent four days in the remote Bernese Oberland to walk into a train station at 3600m and get a train back down to the green valleys below. The sudden change in scenery was just breathtaking with massive mountains towering above lush green alpine meadows.

Having spent some time in the Bernese Oberland I am really looking forward to returning in both summer for some harder rock ridges and in winter for some ski touring.