A Dream of White Horses

I have been lucky enough to spend another weekend up in North Wales, the original plan for the weekend was for lots of moving together in the mountains, but poor weather combined with me feeling ill meant that I ended up spending two days at Gogarth.

According to both mountain forecasts, Friday was supposed to be a sunny day. However, when we woke up in the morning we discovered that the forecasts were very wrong and it was in fact raining. After breakfast in Capel Curig we headed to Castell Helen, unfortunately on the drive over I started to feel pretty sick and it didn’t go away after the walk to the crag. I decided to abseil in anyway and we climbed Blanco, which has some fantastic climbing and amazing rock formations, given my sickness and lack of energy it felt pretty hard and at the top I decided that it was best to head back.

The next day was forecast to be sunny, but given the deluge which had hit the mountains the day before we decided to head back to Gogarth for some warm sunny rock. After another route at Castell Helen where I felt awful on the first pitch, I stared to feel better on the second pitch and we decided to make use of the afternoon sun and head over to Wen Zawn to climb the classic “Dream of White Horses”.

A Dream of White Horses is a fantastically exposed traverse route which follows an unlikely looking line of weakness across Wen Zawn. The route starts by traversing a slab until you get to the final exposed pitch which winds its way along beneath massive roofs and above Wen Zawn with the rock disappearing below you just to leave air between you and the sea.

The walk over to the abseil was stunning due to the fantastic view of the final pitch of our route, Dream of White Horses. After lots of faff due to the pre rigged abseil rope being far too thick to feed through our belay devices, we were eventually on the high tide ledge ready to start the climb. Before we abseiled down we thought we had lucked out and had the route to ourselves, however this was unfortunately not the case as there was another team not he first belay. 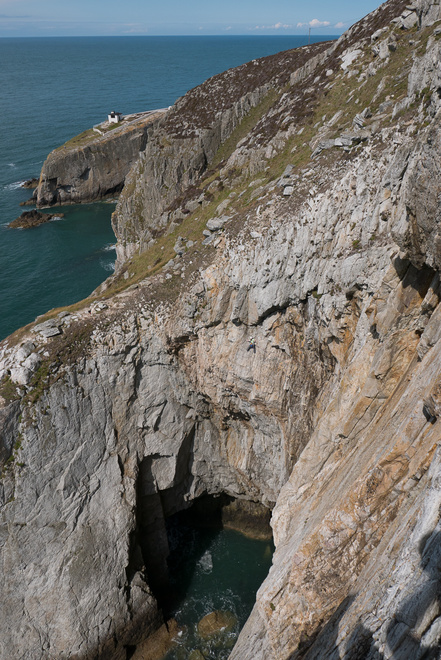 On the main pitch of Dream of White Horses

The first pitch was straightforward climbing and I would have skipped out the first belay but as there was a team in front of us I decided to make use of the belay, to get away from the uncomfortable stance we had on the right hand side of the high tide ledge. At this point it became clear that the party in front of us were not going to be that quick, but that was fine as we elected to queue and it was a lovely sunny afternoon.

Eventually I was able to set off on the second pitch was a bit more difficult than the first, and it was the first proper traverse pitch on the route, with a few short 4c sections. As I was on the belay the weather started to change as the wind picked up, the air temperature dropped and the sun went behind some clouds. This made it get rather cold as we were dressed for the warm temperatures earlier in the afternoon with only one belay jacket between us. 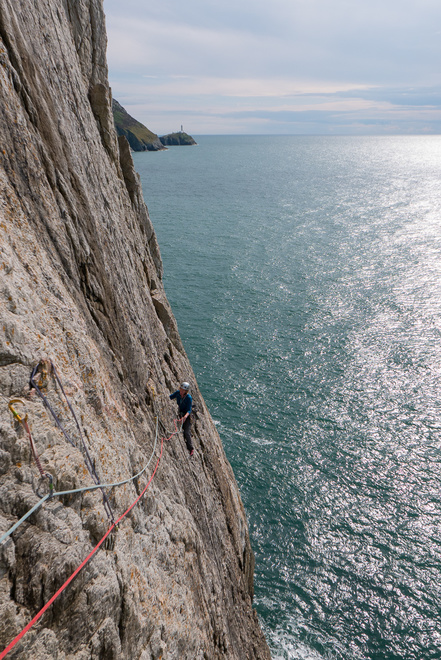 Becky on the second pitch of Dream of White Horses

Instead of climbing up to the next belay and pressuring the team in front of us, we were waiting patiently at the second belay while their leader climbed the final pitch. At this point a major blunder in crag etiquette occurred as two people who had abseiled past us on the route, then climbed another route to join their mates and push in front of us for the final pitch. Which we both felt was a bit out of order and resulted in us spending 1h15mins at a hanging belay in the cold wind!

I then headed off up the third pitch which probably had the hardest climbing on the route. It was up a wonderful rising flake crack which had some enjoyable sequences up it. After waiting to set up the belay due to the people who pushed in having used 7 pieces of gear in their belay, and using up every available crack I was finally able to setup a belay, and Becky was soon at the final pitch. 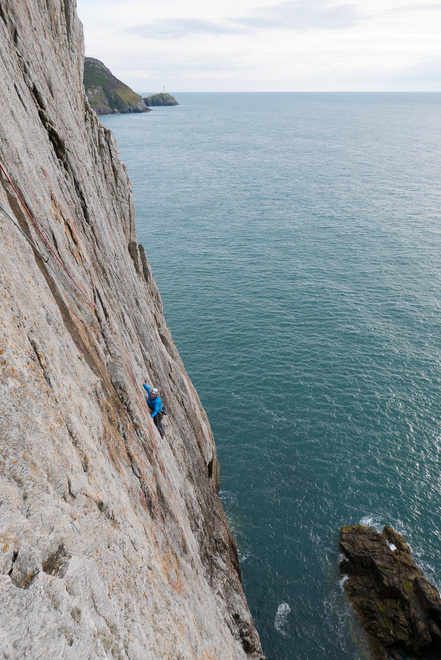 On the wonderful rising ramp line on Dream of White Horses

After a quick, but careful gear exchange I set off on the final pitch, with the added challenge of not being able to feel my fingers at all due to being so cold. I had to see if my fingers were on the holds by looking at them, rather than by using feel! Thankfully, I was soon out of the wind where I started to warm up and enjoy the fantastic climbing.

The main pitch takes an improbable line across an intimidating face, which is above a massive drop. Surprisingly the climbing is all in balance and never that hard, which allows you to fully embrace the stunning exposure beneath you. Additionally there is excellent gear all the way along, so with a thoughtful leader there is never the need for the second to worry about having a massive swing into free space, although it is probably best not to test this theory!

As Becky started the traverse the evening sun made an appearance which made the face glow in the lovely orange sunlight, which made for a brilliant end to the route. Thankfully Becky made quick work of the pitch, with no worries about the exposure, in fact she even seemed to enjoy it at the time! By the time she got to the belay I was really pretty cold so was glad to run up to the descent gully to warm up and get to the extra layers, food and water! 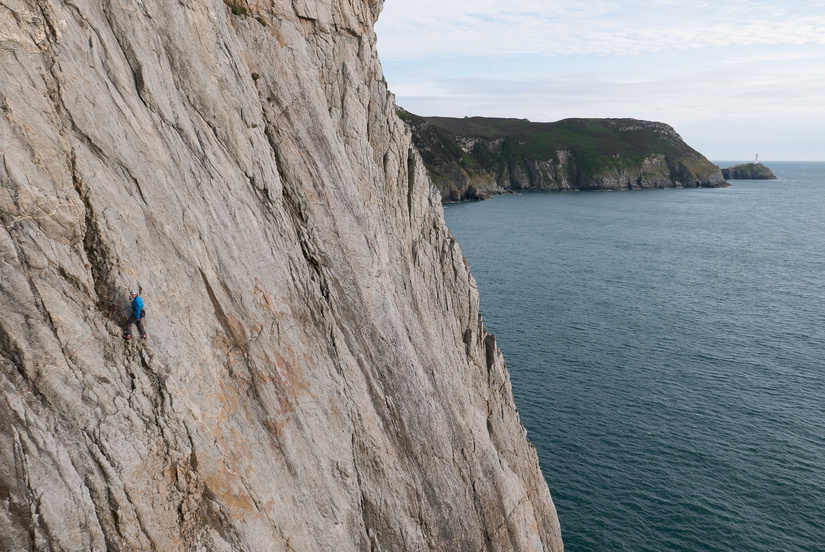 Becky on the final stance

Becky at the start of the main pitch 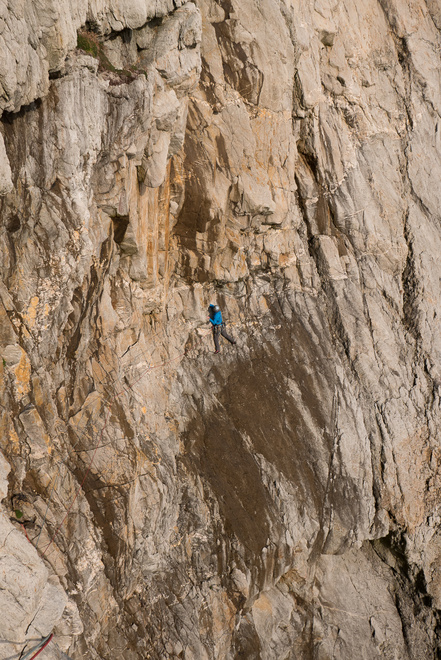 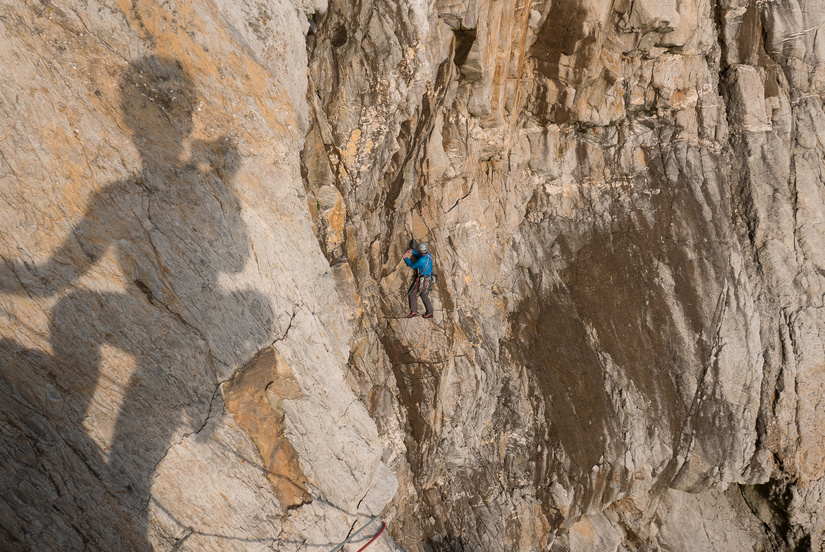 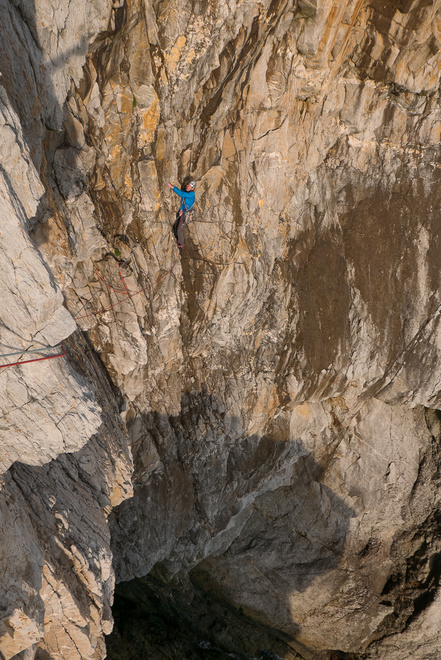 Superb exposure on the final pitch of Dream of White Horses 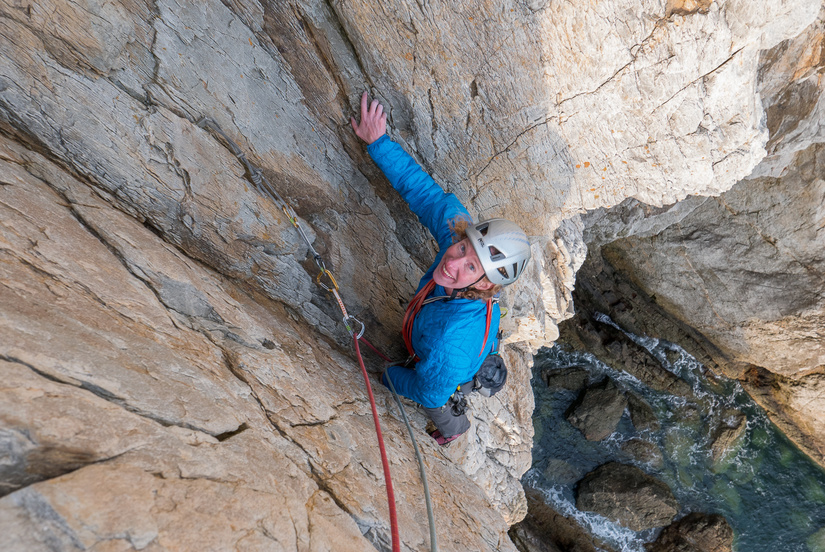 Happy at the top 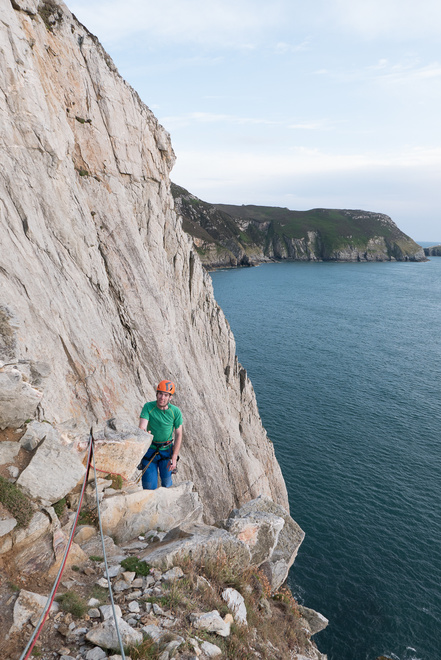 We really had a brilliant day on a classic route, it was great to do the route in such good conditions with warm afternoon sun at the start, and lovely evening sun at the end. It was a bit of a shame it took so long given that for all of the time we weren’t sat waiting at belays we were pretty quick and efficient, but we did choose to queue!