As a climber who claims to love sea cliff climbing, there was one major sea cliff in England & Wales where I have yet to successfully climb. About three years ago I had a bit of an epic on Main Cliff which resulted in having to abseil into the sea. It has been high on my list of destinations to return to, but it just hasn’t quite happened.

Due to the weather crapping out in Snowdonia, after a brilliant day on Lliwedd we headed over to Gogarth for two days of sea cliff climbing.

We had a chilled out start to the day due to having had a long day the day before, which was followed by a few whiskies due to it being my birthday. The morning was lovely in North Wales so it was a shame to have had a lie in while it was sunny, but we enjoyed a chilled out breakfast in Capel Curig before heading to Gogarth.

Due to the forecast being for rain, there being strong winds at the carpark and me being a bit ill, we decided to head to the relatively friendly crag of Castell Helen to climb the classic VS, Lighthouse Arete Direct. It is all relative, it is friendly for Gogarth but the climbs are all multi-pitch and the approach is a 60m abseil from an assortment of horribly rusty pegs.

With some poor rigging in place when we got to the crag, I was glad when the owners of the rope decided they were heading off and pulled their rope up which enabled me to rig the abseil with my rope. The abseil down the the niche was airy due to the steep rock, 60m feels a long way down on an abseil!

The climb has various different descriptions in different guidebooks, I decided to follow the Rockfax description which described the route in two pitches. The first being a long pitch up to the top of the hard climbing, and the second being an easier pitch to the top. The first pitch was outstandingly good, an easy traverse made the start feel committing above the sea and then the climbing was sustained all the way to the top of the pitch.

As we got to the top of the route the wind was starting to pick up and it felt like the weather was about to turn. As the lighthouse had started up, we decided that they probably knew something that we didn’t. As we started walking back the rain started and by the time we were back at the van is was properly lashing it down, so it was a good call.

It was a shame the forecast rain turned up, as after the first route I was feeling a lot better and wanted to jump onto one of the harder routes at the crag, oh well, there is always another day. 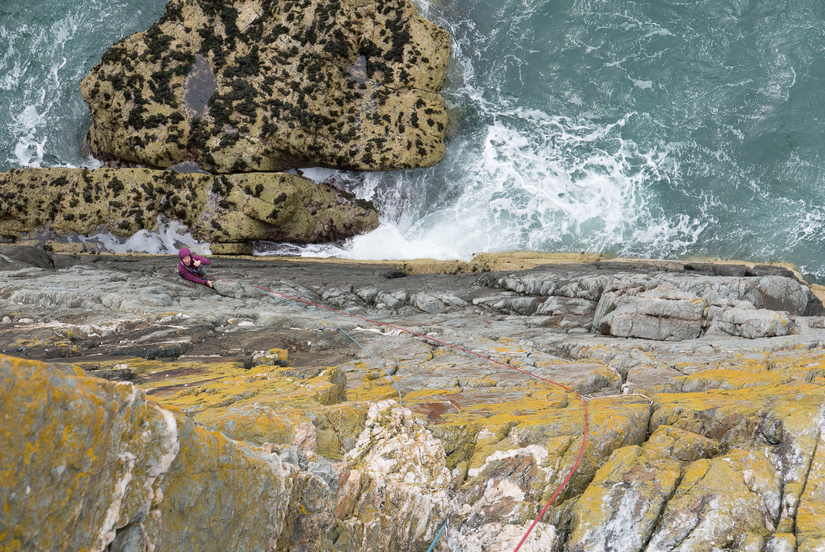 At the start of Lighthouse Arete Direct 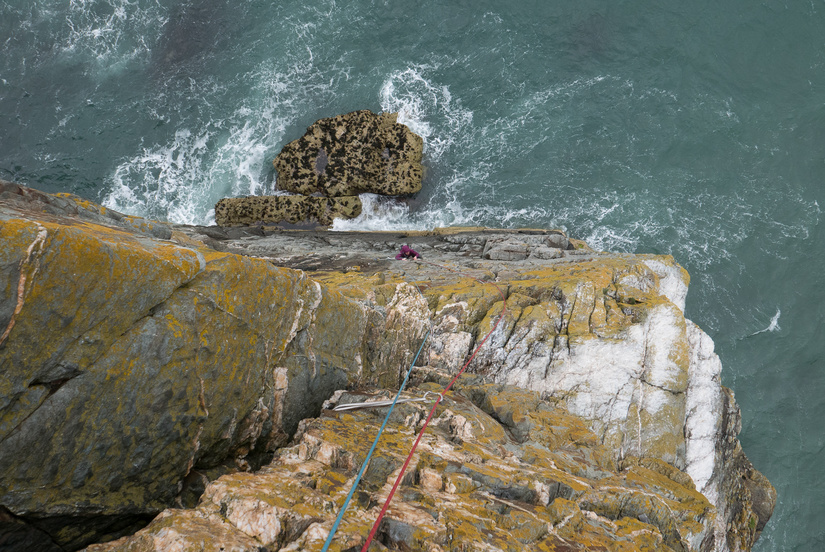 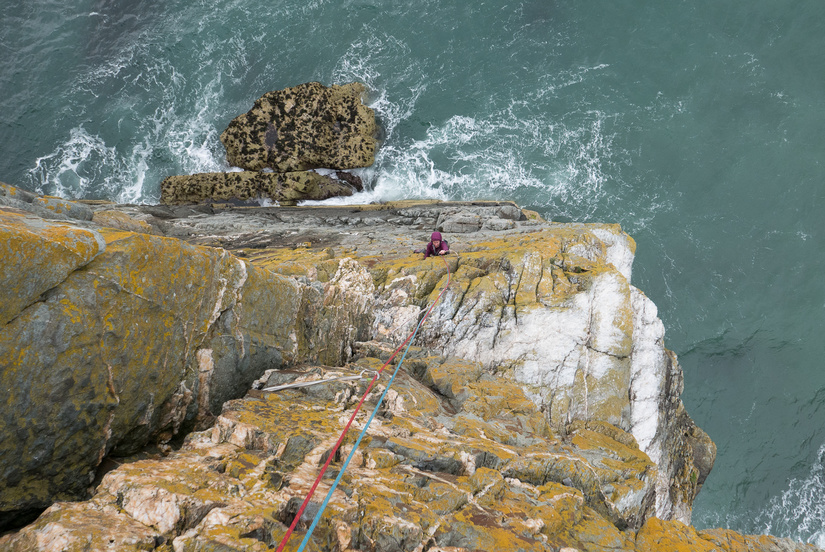 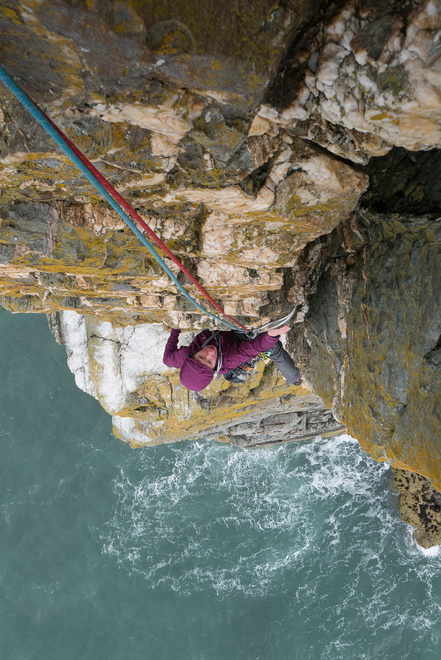 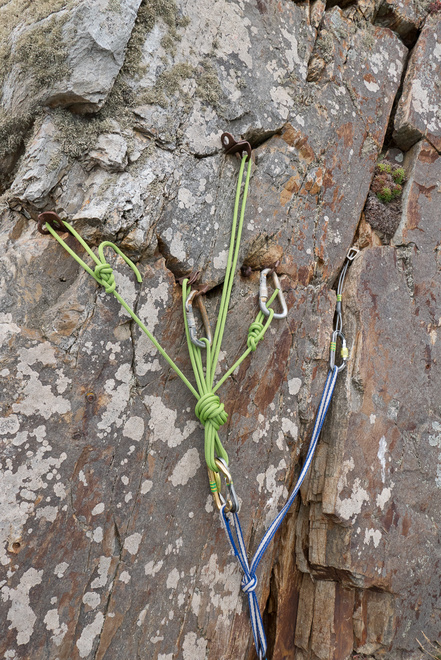 Due to my previous epic was very keen to get back onto Main Cliff. Gogarth seemed like a great choice as it was a classic 5 pitch E1, with most of the pitches being easier before a final hard pitch. On the approach the weather was lovely, a clear blue sky day with sun just starting to kiss the crag.

On the descent we saw a large number of climbers gearing up, and it was a relief to get to the gearing up ledge and discover that no one was heading for the classic of Gogarth. As it was so busy I was still skeptical that the route would be free, as there was a line of ants descending in front of us. We were very surprised to get to the base of Gogarth and find it free from anyone else, all the crowds had headed further around onto the tidal section of Main Cliff.

The route was fantastic with an easy initial pitch up to a large ledge, where I had to have a fight with a seagull for belaying rights! The second pitch involved climbing three sides of a square, at tough 5a. The climbing was enjoyable, but due to the traversing I had to be careful with the rope work to make sure I fully protected Becky on the traverse and the right side of the square.

I linked the next two pitches, the first was dirty and horrible, the second was a fantastic groove up to a cramped belay on top of a pinnacle. The climbing up the groove was straightforward but pretty bold at the top due to it being very wide and not having enough large gear.

The crux pitch started with a traverse so again had to be careful to ensure I protected Becky, before a groove that is described as surprisingly physical in the guidebook. I set off up this groove expecting holds to arrive as it was “just E1” however I was quickly surprised to find that holds didn’t appear and was suddenly worried that I was going to fall off an E1, which hasn’t happened for over two years now! Suddenly I was out of balance and falling, it was a decent lob onto a good wire which was well below my feet. After a rest I got back on the route and made a meal of it but was eventually at the top of the hard climbing and just had to contend with the loose top-out.

We headed back to the van having had an excellent weekend of climbing, and I am now looking forward to heading back to Gogarth to get on more of the classics! 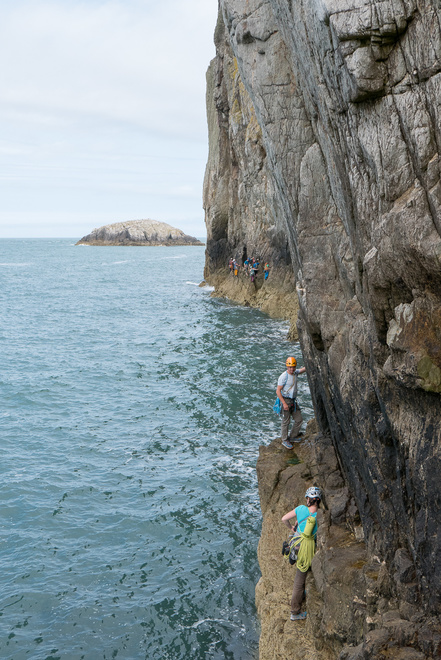 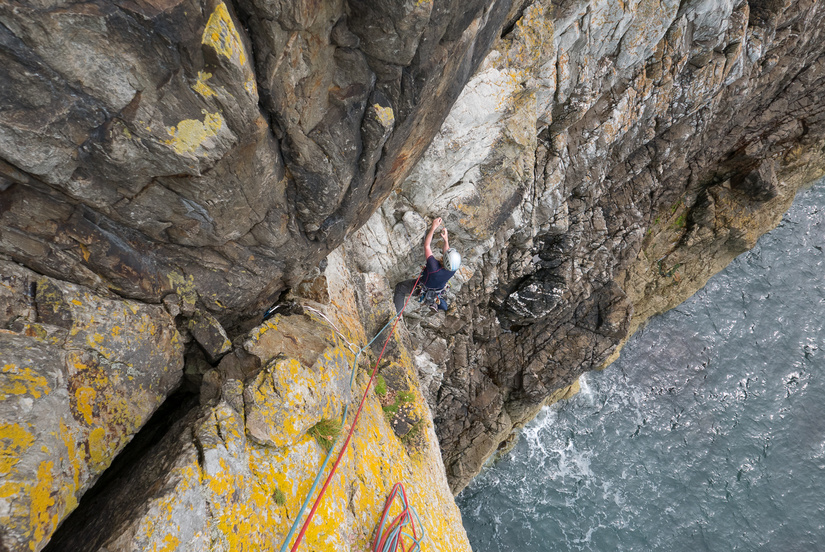 Becky on P1 of Gogarth 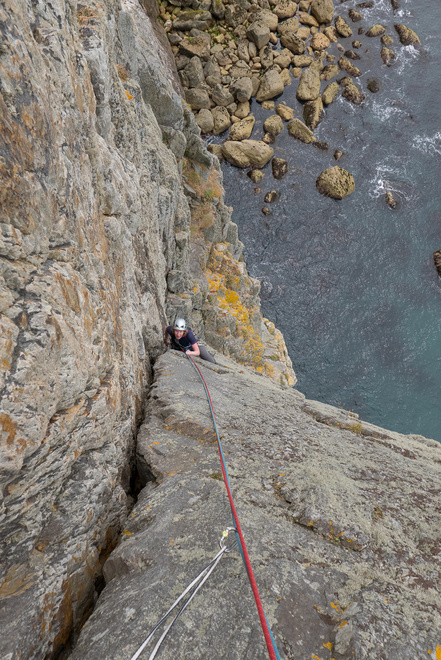 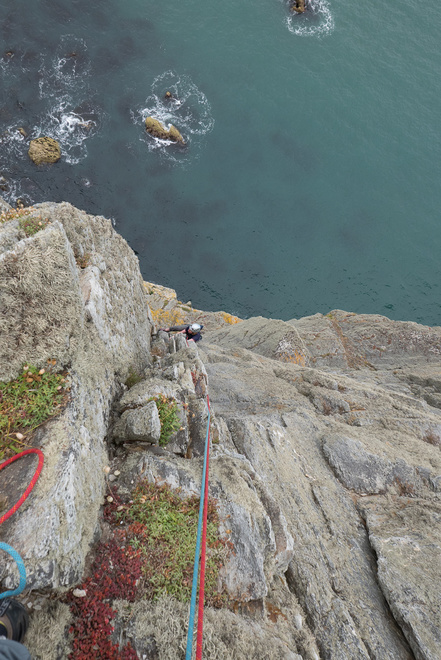