Many times while walking the classic Snowdon Horseshoe I have looked across from Crib Goch at the impressive cliffs of Lliwedd and have been drawn to them due to their scale as the shady cliffs tower above Llyn Llydaw. You don’t have to read far into the climbing at Lliwedd to realise that it is far more than a multi pitch crag, due to a combination of it’s size, the rock and it’s location in the mountains it seems to attract far more than it’s fair share of epics.

I headed up to North Wales with Becky for my 25th Birthday weekend, and armed with a good forecast following a dry day we decided to head up to Lliwedd to have an adventure. Instead of opting for one of the more popular 12 pitch easy routes, we headed for a 5 pitch E1 called Terminator, followed by a 180m diff up the final arete of the face.

I knew route finding was likely to be a problem at some point on the face so had planned to make sure I read the guidebook lots on the walk in while inspecting the face, however the weather had other ideas… As we followed the miners path from Pen-y-Pass we turned the corner to see Lliwedd shrouded in mist, which made working out where the routes started fairly challenging, let along trying to work out where the route went up the face.

Thankfully as we walked around the lake the promised clear day arrived as the cloud lifted off the mountain. After much deliberation we decided where the route went and made the slog up to the base of the route. 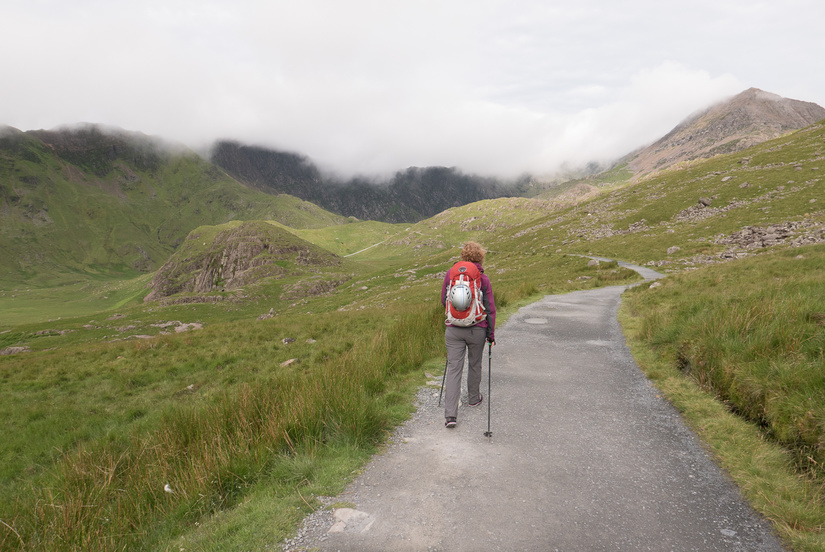 Walking into a misty Lliwdd 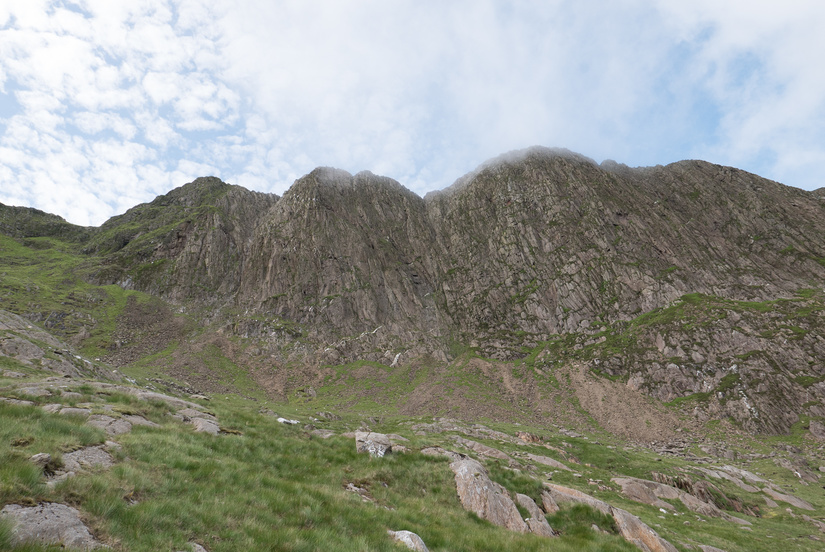 Given that the guide book mentions that generally the climbing at Lliwedd is pretty bold I wasn’t expecting much gear on the entire route, I was however expecting a bit more than there was. After quickly gearing up we headed up the first pitch. In the Climbers’ Club guidebook this pitch is described as extremely bold, it turns out that this means that after 5m there is no gear. Thankfully the climbing was very straightforward and I was soon at the top of the pitch and having to work out how I was going to get up onto the ledge when all that was between me and the ledge was wet, steep grass, and all that was between me and the ground was, well air!

Becky was soon at the belay, and I was setting off on a 47m pitch. This was the pitch which dictated how much gear I brought with me as it was graded 5b. This proved unnecessary as on average for the pitch I found somewhere to place gear every 13m, and it wasn’t bombproof gear either. One particularly excellent piece while 15m above the previous gear was a sling 4m to my right which was hooked over a 2″ high lump of rock. I think I may have bypassed the 5b move near the start, which seemed like a very artificial move onto the slab when there was an obvious line 1m to my right, the rest of the pitch was very sustained at 5a, although despite the climbing not being technical, the nature of the climbing with sloping hand and foot holds meant that it always felt very insecure. To say I was relieved when I arrived at the belay would be a bit of an understatement! In hindsight I did enjoy it, but it certainly was type II fun. 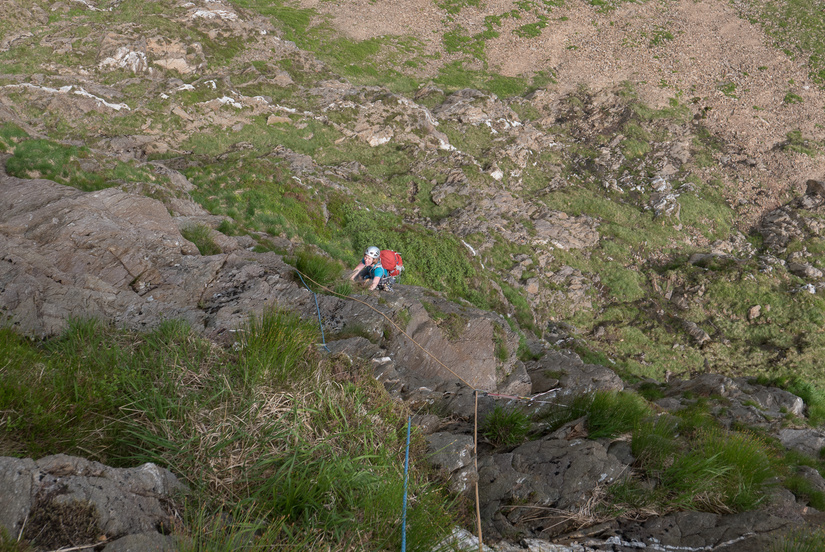 Becky at the top of the second pitch

The views were stunning at this point and I was able to enjoy a brilliant belay while Becky climbed the pitch. Soon I had to leave on the next pitch, which was up a steep groove into “The Eaves”. This was actually well protected, and was enjoyable despite involving a bit of thrutching. An easy “pitch” (scramble at best) took us to the final pitch of Terminator, the crux.

Looking up at the final pitch from the bottom was fairly intimidating as it was a fairly blank wall with the odd hold which all looked very spaced from the ground. Committing to the climbing was immediately rewarding, with excellent gear and enjoyable technical moves between excellent holds. The first section of the pitch was never sustained, with enjoyable short sequences. I was soon on the ledge which broke the pitch into two, with just one more section of climbing to go.

This final section of climbing involved climbing onto a block below the final wall and climbing that to the top. There was an enjoyable balancey move to get onto the block and then the foot holds just kind of ran out. The final sequence was a very committing strenuous crack/layback sequence which took you to the top and a glorious ledge which was in the sun. 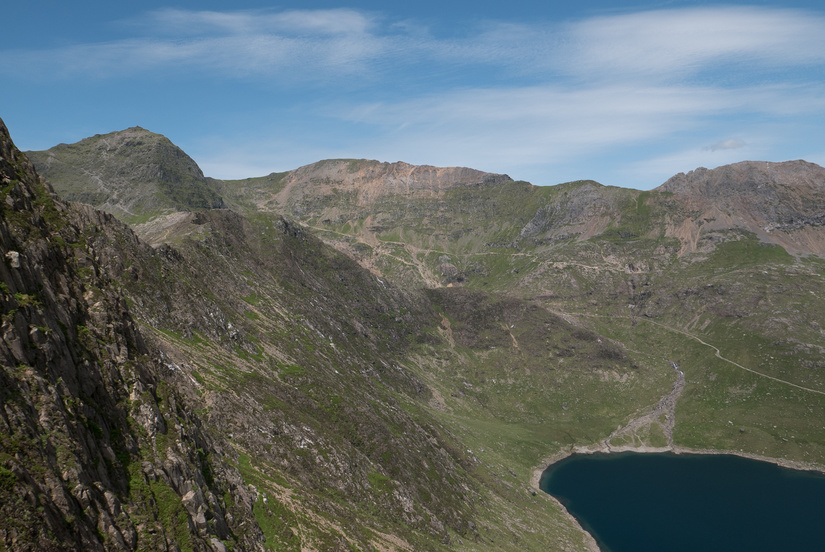 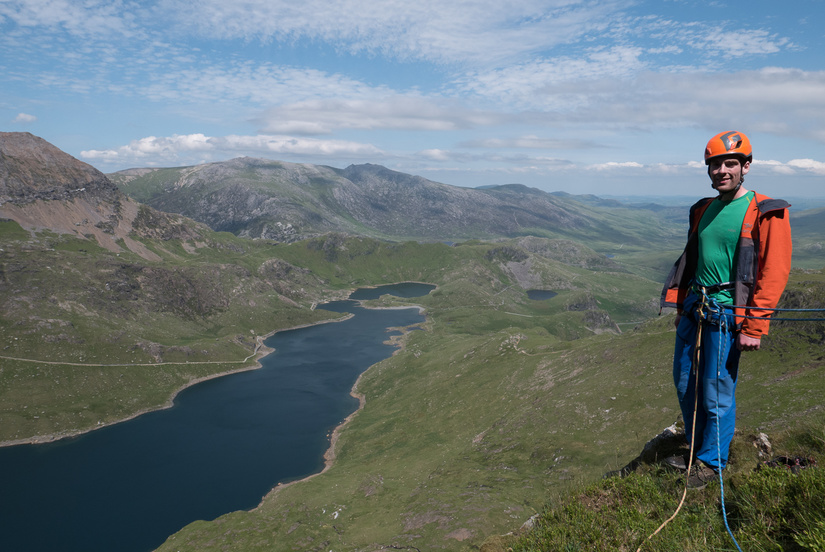 Me at the top of Terminator

We enjoyed lunch on the ledge before Becky lead two pitches of Diff up terminal arete. After these two pitches we put the rope away and scrambled to the top. The views from the top were spectacular, with fairly clear air and views in every direction. I was even surprised with whisky for my birthday.

We had considered finishing the day with the Snowdon horseshoe, but time was getting on and we decided to call it a day and head down to the pub for dinner. The descent was enjoyable while we were on the ridge in the breeze, a brief slog down took us back to the miners path which was baking in the sunshine. A quick walk took us back to the van and a well earned pint in the sun. 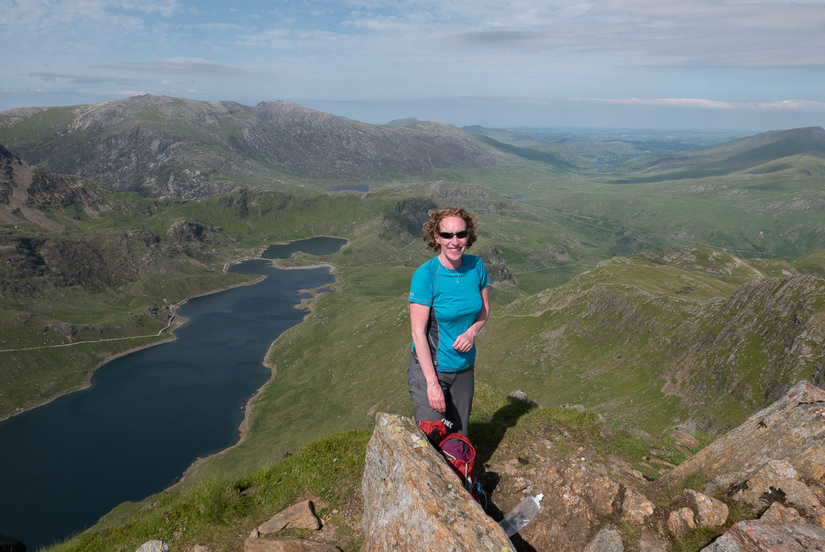 Becky on the summit 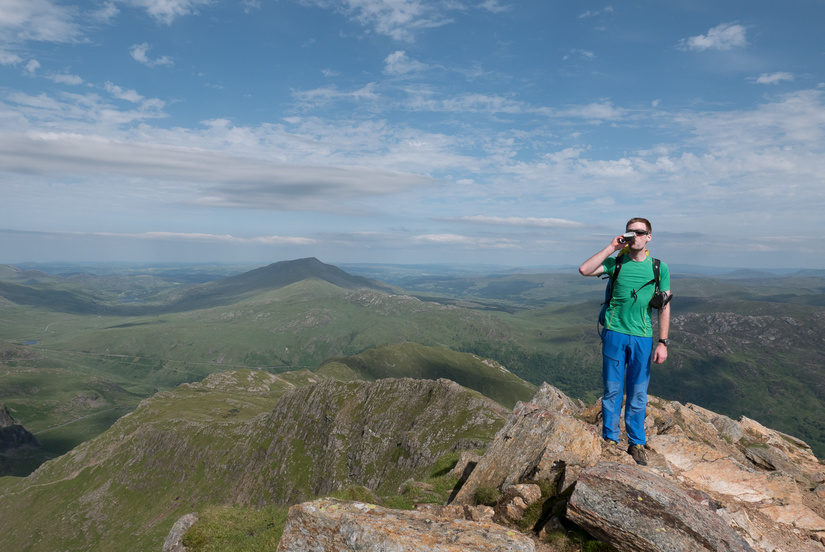 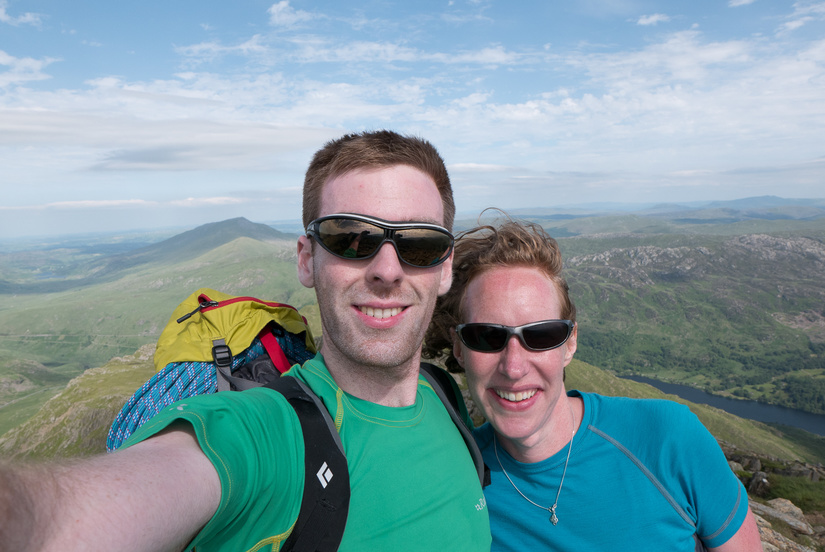 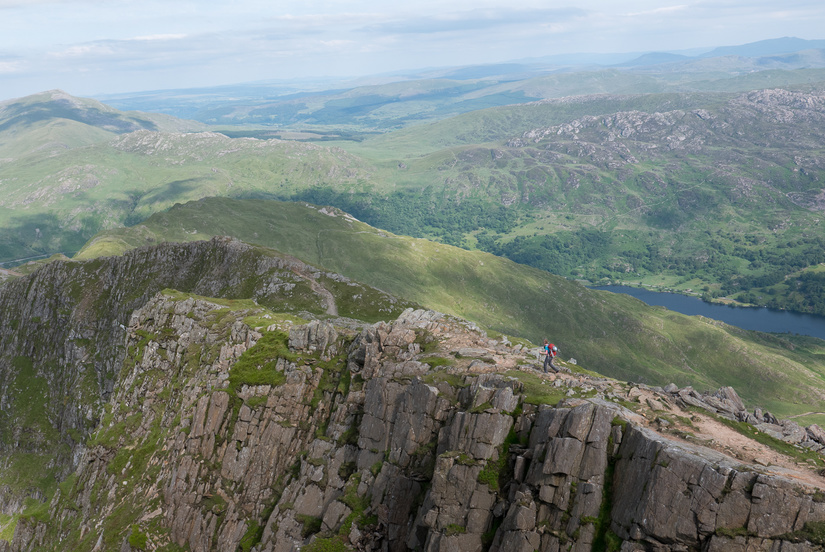