Traverse of An Teallach

With a ridge of high pressure across Scotland and far too much snow on Ben Nevis to go climbing we decided to head back up to the North West. As the weather was improving throughout the day we decided to have a late start and accept that we would be finishing in the dark.

There was snow down to the valleys, which while is pretty isn’t always great for making quick progress. Thankfully with the good quality stalkers track we made good progress despite the snow and were soon on the mor below Sàil Laith. The conditions on the walk in were fantastic with lots of sun and blue sky and views which just kept getting better, however we were walking towards a very cloudy An Teallach with the hope that the cloud would lift as the day went on. 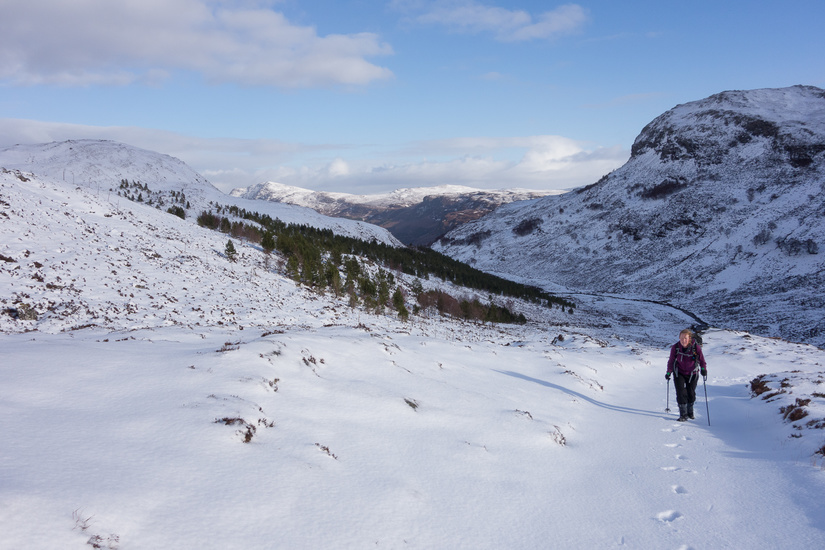 Sun on the long walk in

Me walking towards Sàil Liath 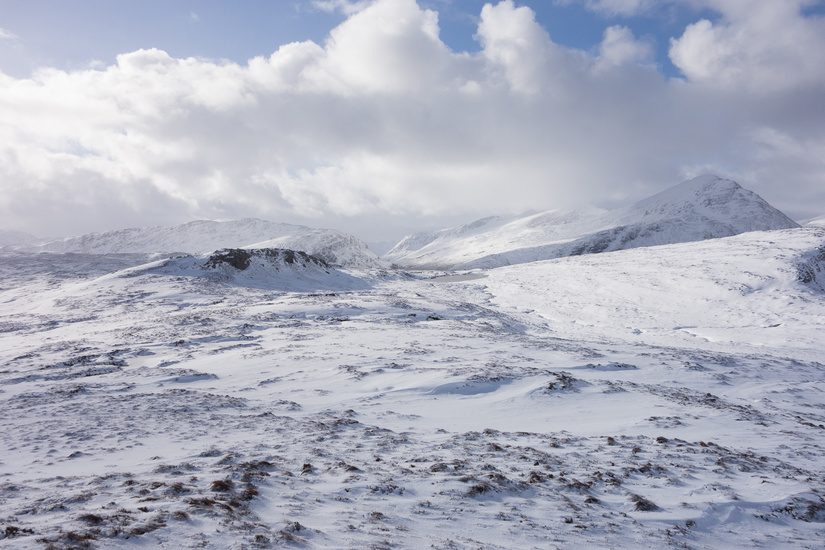 After a slog across the snowy mor towards Sàil Laith, which somehow only involved one wet foot, we were soon at the base of the ascent. Once we got up to the old snowpack we were pleased to find excellent neve with a thin layer of soft new snow on top which enabled quick progress to be made up to the summit without having to put crampons on. The views on the ascent were just fantastic and certainly made the slog up to the summit feel more enjoyable, as we ascended the cloud base seemed to lift which meant that at the summit we were rewarded with out first view of An Teallach.

On the summit of Sàil Laith

The first section of ridge is just exposed walking amongst the breathtaking scenery of the remote north west highlands, and we made good progress along more brilliant untracked snow. After crossing Sàil Laith, Stob Cadha Gobhlach and the shoulder of Corrag Bhuidhe South Buttress we were soon at the base of the highlight and crux of the route, the Corrag Bhuidhe Pinnacles. 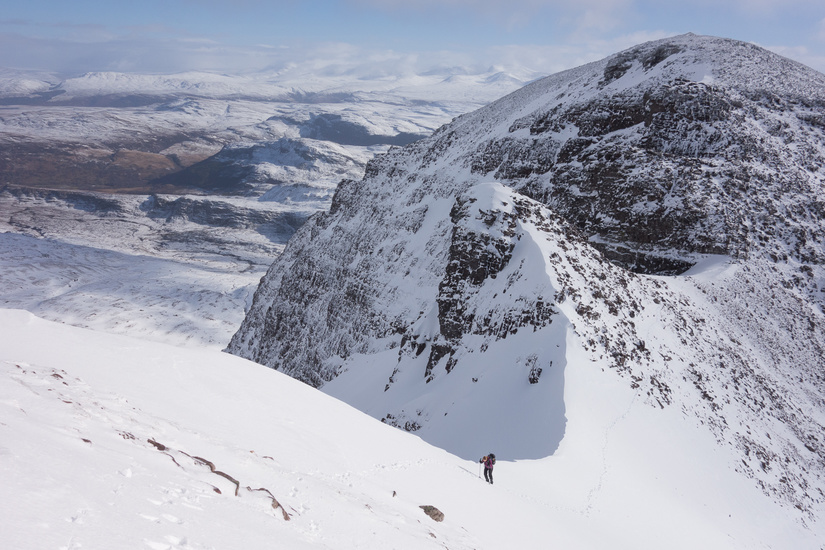 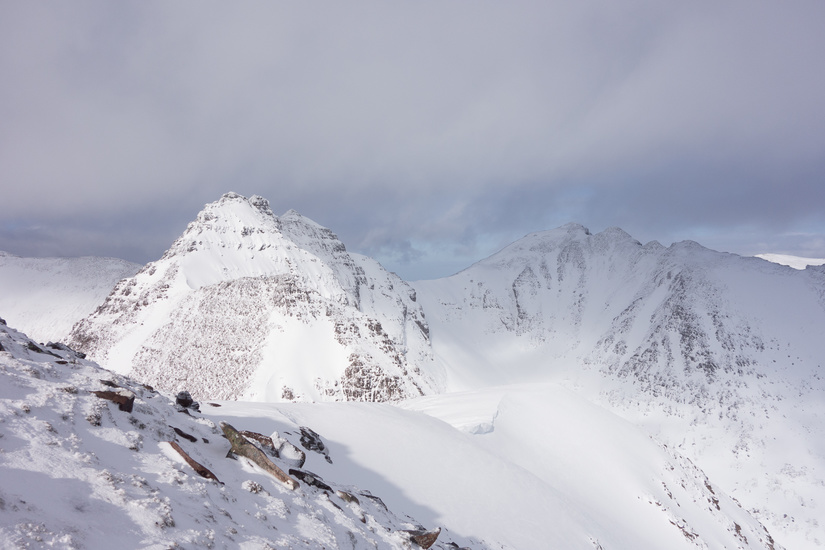 Views of An Teallach 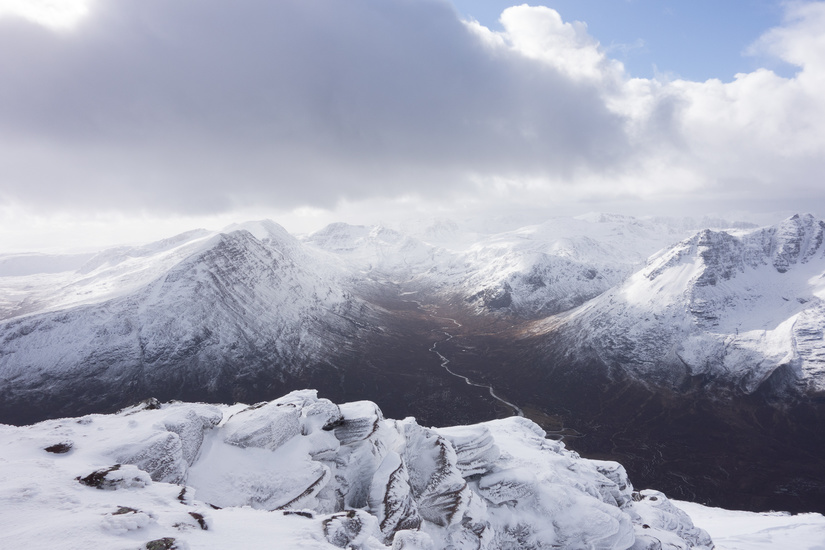 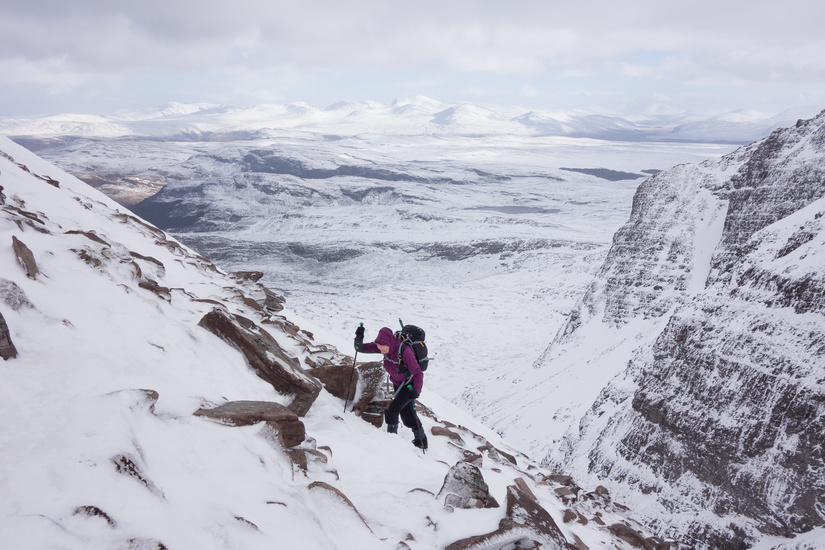 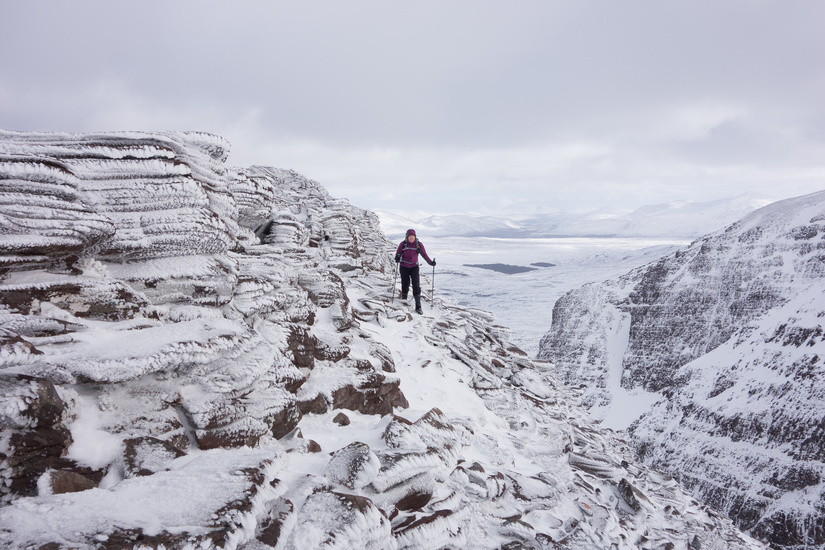 We geared up at the lower terrace where the walking path skirts off the avoid the pinnacles and climbed some mixed ground up to the higher terrace. From here we traversed below the steep and intimidating base of the first pinnacle until we got to some more amenable looking ground which we climbed up to the summit. From this point on the scrambling along the ridge and over the pinnacles was continuously interesting and certainly not something to avoid. At one point on the ridge the cloud came in a bit, but as it cleared we were treated to a rare mountain event, a good broken spectre. 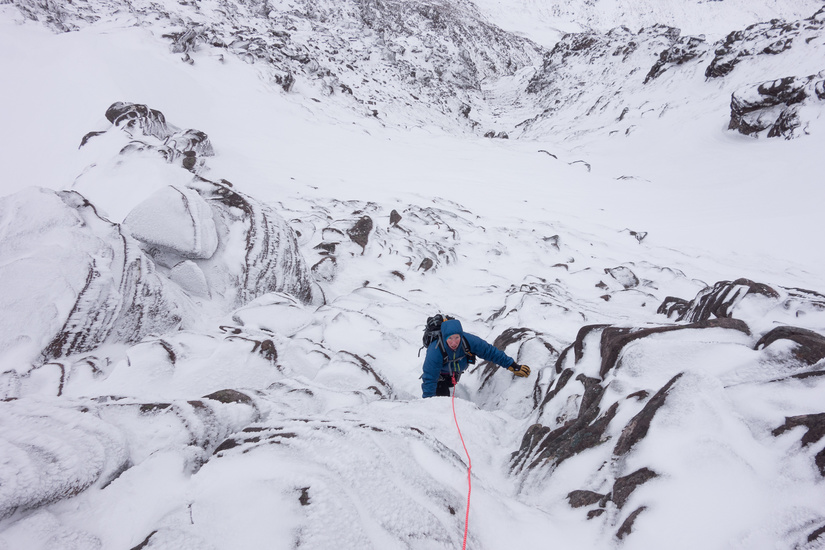 Climbing up to the Corrag Bhuidhe Pinnacles 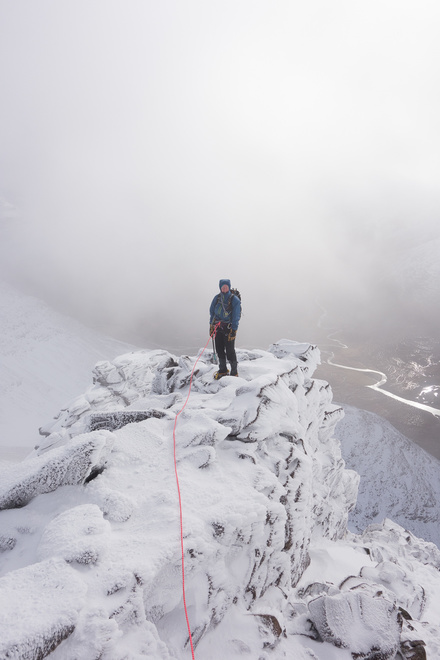 On top of the first pinnacle 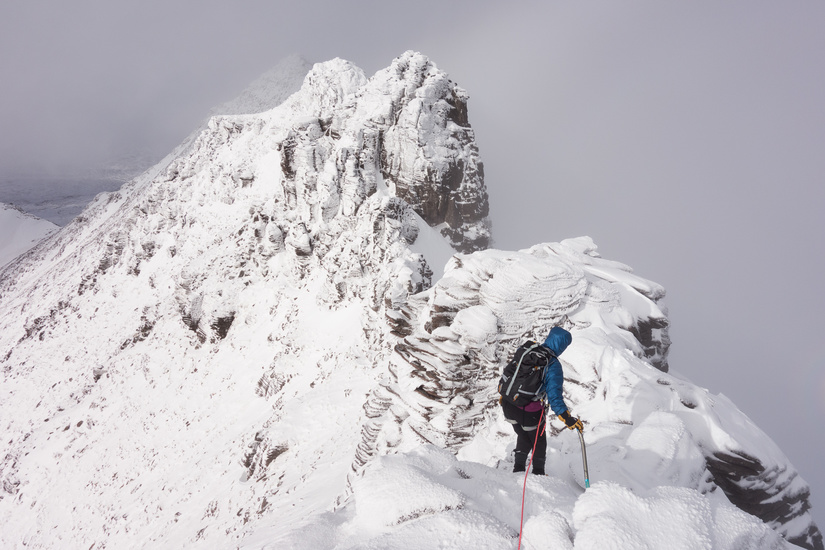 Fantastic scrambling along the pinnacles 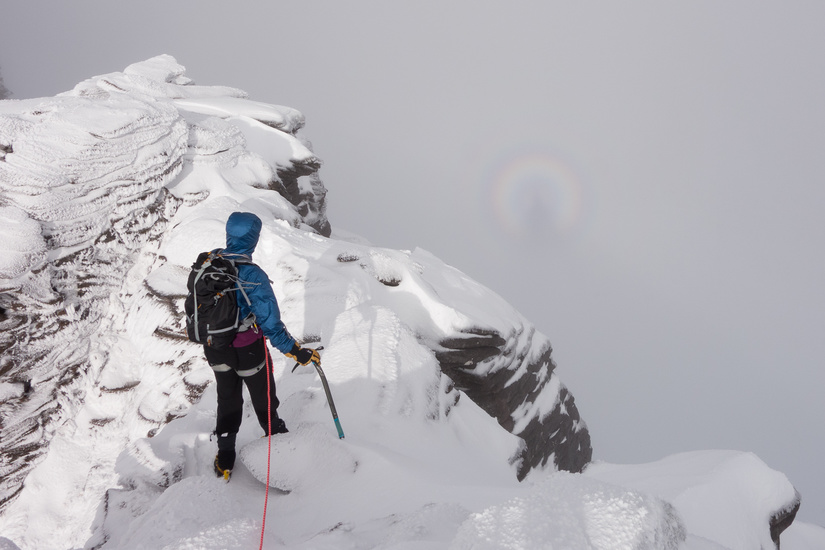 Broken Spectre on the Pinnacles 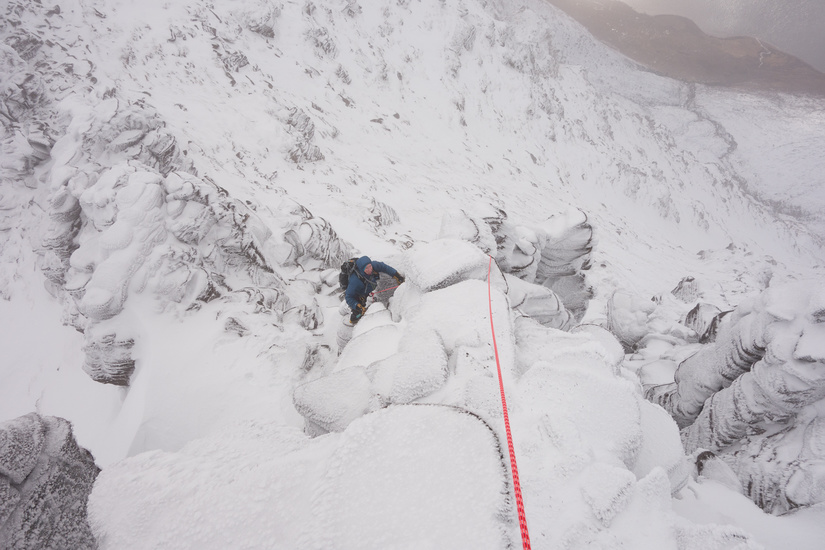 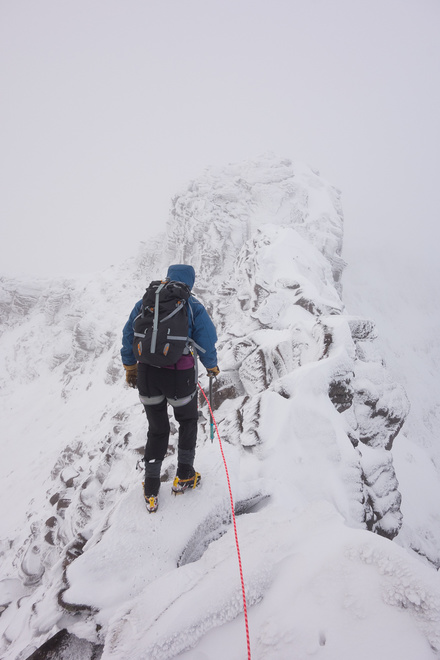 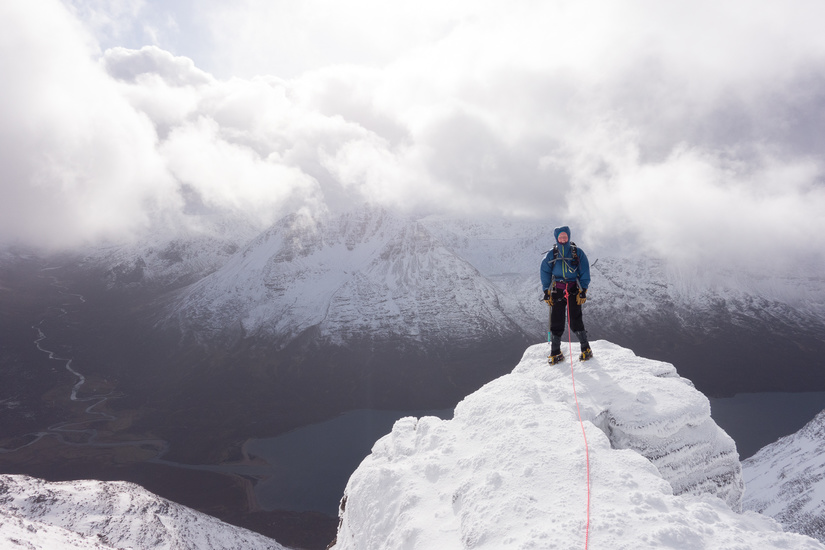 Nearing the end of the pinnacles 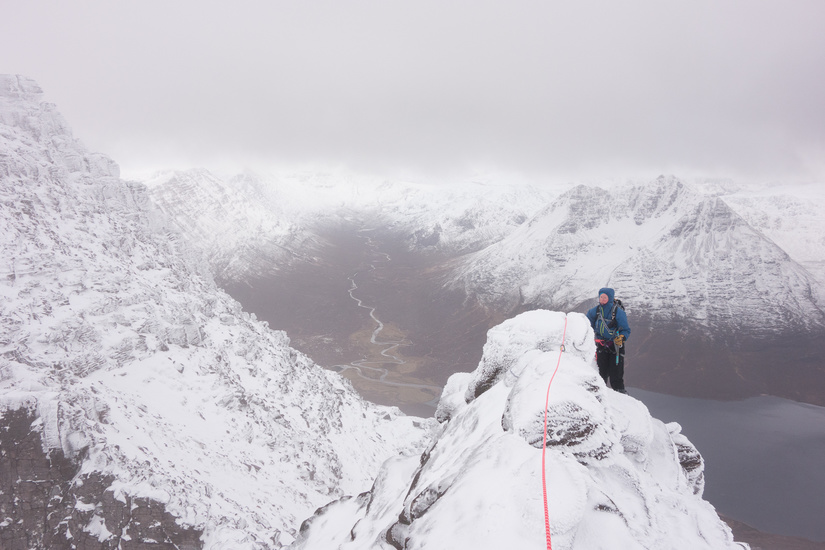 Unfortunately all good things have to come to an end and after a few hours of a combination of short roping, moving together and short pitching we were soon at the end of the pinnacles and at the base of the first munro.

The two munros, Sgùrr Fiòna and Biden a’Ghlas Thuill, are both at the end of the ridge and beyond all technical difficulties so we unroped and made faster progress again. As we climbed the second munro we were treated to fantastic views of the ridge we had traversed which was a great way to end the route. As we were on this section of the ridge the wind started to pick up again and was very cold and gusty so we didn’t hang around and quickly made our way to the descent so we could get out of the wind. 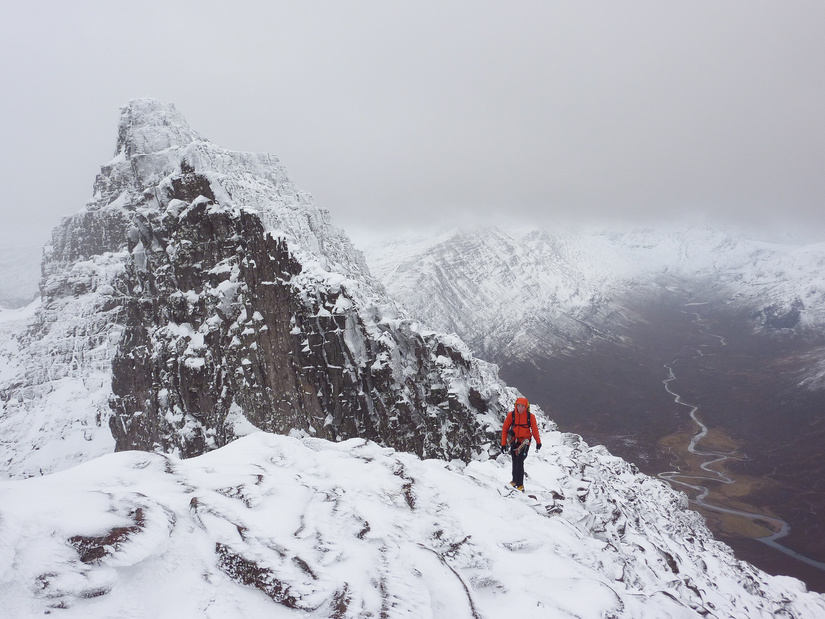 Me on the ascent to the summit of An Teallach 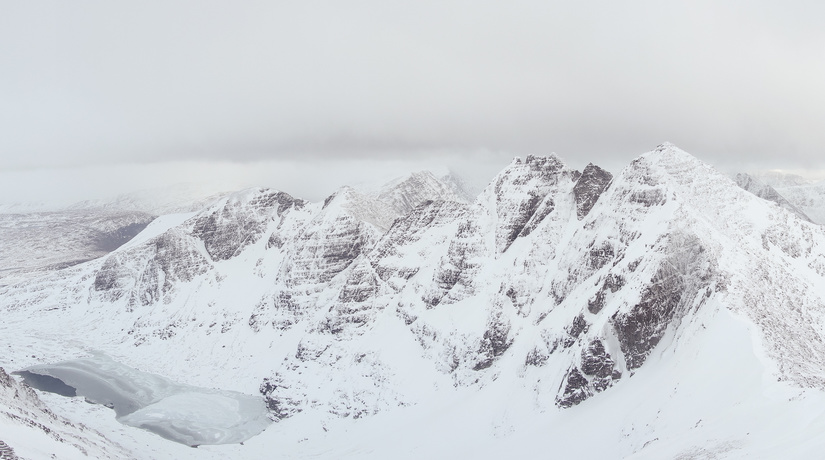 The An Teallach Traverse

We made a careful descent down into Coire a’Ghlas Thuill which turned out to be surprisingly awkward with a strange mixture of rocks, ice, windslab and wind eroded snow. The cliffs towering above the coire are very impressive and have certainly inspired me to return to do some remote winter climbing at some point in the future.

At this point the light was starting to fade and we began the long and tedious descent down very boggy ground with a covering of soft wet snow. This seemed to go on forever and was made worse by having to put head torches on and vanish into the world of a single head torch beam while attempting to follow a vague track.

Eventually we were almost at the road, but to get to the road there was still a challenge remaining. There was a thick rhododendron forrest with a faint path through it, in daylight it may well be a simple task finding the way through, but in the dark with just a head torch it was a very strange and disorientating experience and certainly the strangest end to a walk I have ever experienced.

The traverse of An Teallach was a brilliant day out, and certainly deserves its reputation as arguably the best ridge traverse on mainland Scotland. After two days out in the crowded northern corries of the Caingorms it was brilliant to be out in the remoteness of the north west highlands and it was great to be able to complete a classic mountaineering route in good weather, with good snow conditions and without any tracks in the snow to follow.

One Response to “Traverse of An Teallach”