After three days not getting out due to lots of warm weather and rain I was pretty keen to get out for another day of winter climbing despite the slightly dodgy forecast. I was out with Jason from Peak Aspect today and it was great to be out with an experienced winter climber having done a lot of guiding less experienced friends over the past few weeks.

The past two days of rain caused a significant thaw and it wasn’t forecast to cool down until the early hours of the morning, due to this we decided to head up high on Ben Nevis in the hope that anything that might have refrozen would be there.

The day started pretty badly as it was raining when we got out of the car which meant a sweaty walk up to the CIC hut in gortex and I somehow managed to forget my camera. As we were walking in the rain eased up and the weather cleared up from the west which produced some fantastic views back down the valley and towards Ben Nevis.

Ben Nevis seems to have coped fairly well with the thaw and all of the big lines are still looking fat, surprisingly even the Shroud was still complete but very very thin. A few teams climbed Hadrian’s Wall and reported that it was pretty wet with water coming out of ice axe placements. A few teams went to look at Point Five gully and apparently despite it looking ok it was pretty much a waterfall today so they bailed and went higher on the mountain. 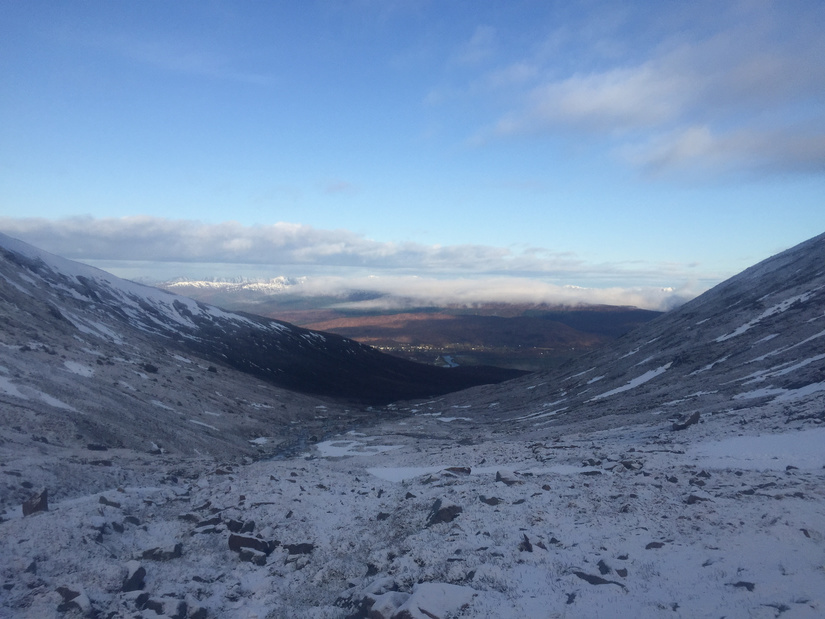 Stunning views on the walk in 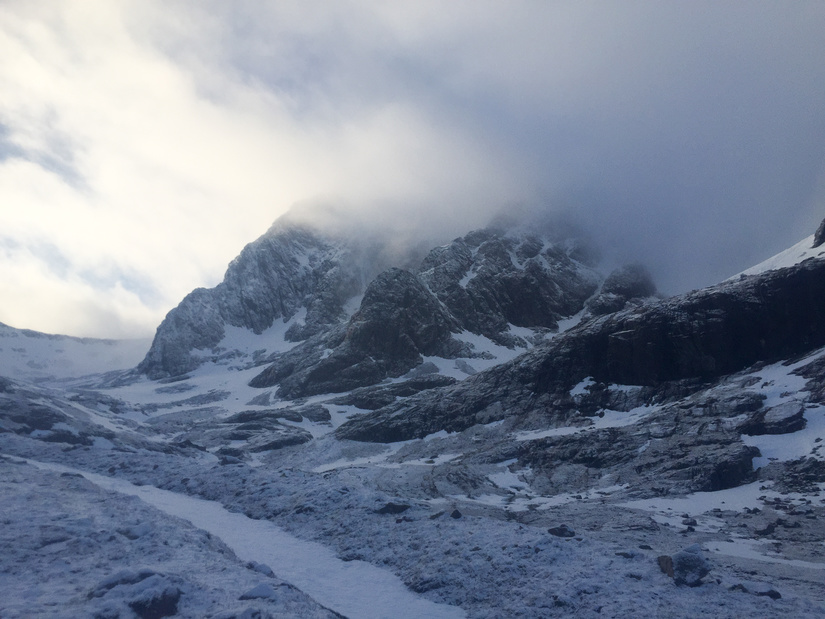 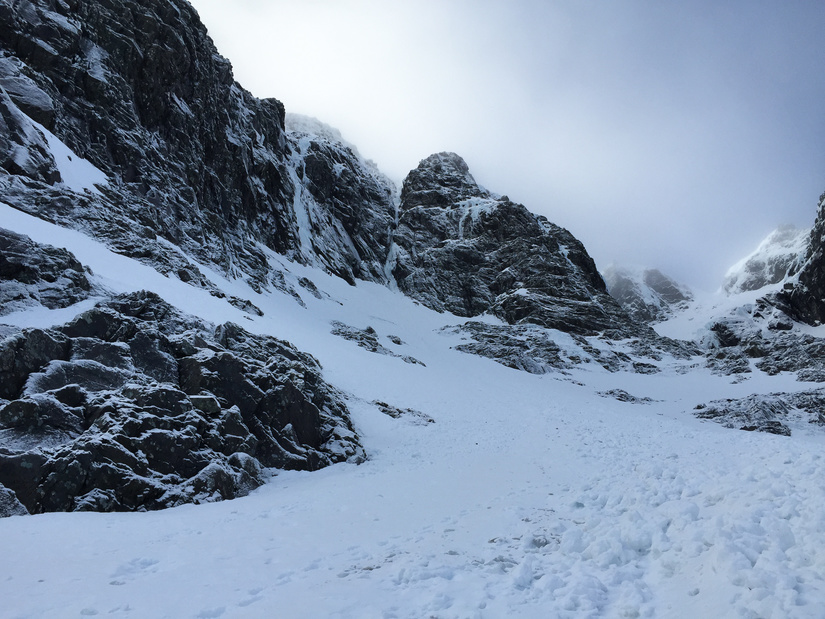 As we made the long walk up Observatory Gully both Smith’s Route and Tower Scoop were looking brilliant and blue. As there was a party ahead of us in the gully we decided to head up Tower Scoop to warm up, it turned out not to be in as good condition as it looked and the first pitch felt more like canyoning due to the waterfall running down the ice. The second pitch was slightly more frozen but still a bit dodgy and large chunks of ice were fairly detached, as Jason nearly found out the hard way… 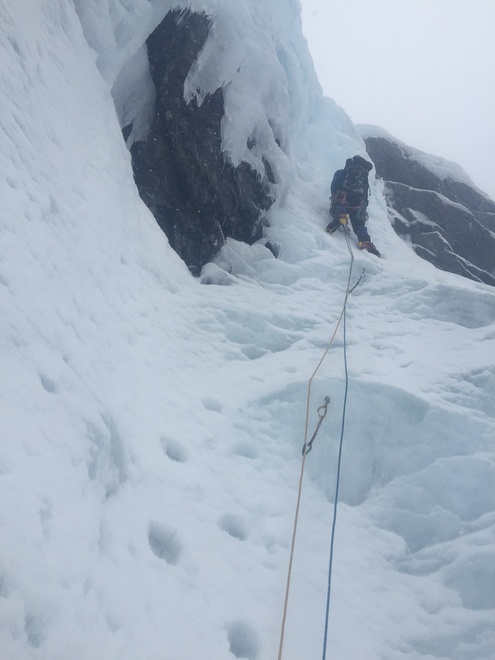 We made the traverse over to Smith’s route to find it looking a bit more frozen and the teams in front of us reporting that the first pitch was in alright conditions. We didn’t really end up queuing at all as by the time we had geared up they were far enough up for us to start climbing. The first pitch was pretty straightforward but the ice was good and the climbing was enjoyable, however the belay at the top was dripping.

As I set off on the second pitch the ice was initially good but the ice soon deteriorated and become less frozen on top which made the climbing feel pretty straightforward but tenuous, but also pretty serious as gear was pretty minimal and questionable when it was found.

The third pitch was an easy topout pitch apart from the steep cornice with cruddy snow which Jason made quick work of, I was reasonably glad for the rope above me! As we topped out the conditions were pretty crap so we made the dash down to get out of the weather, as we were descending it all cleared up and gave us stunning views on the descent. 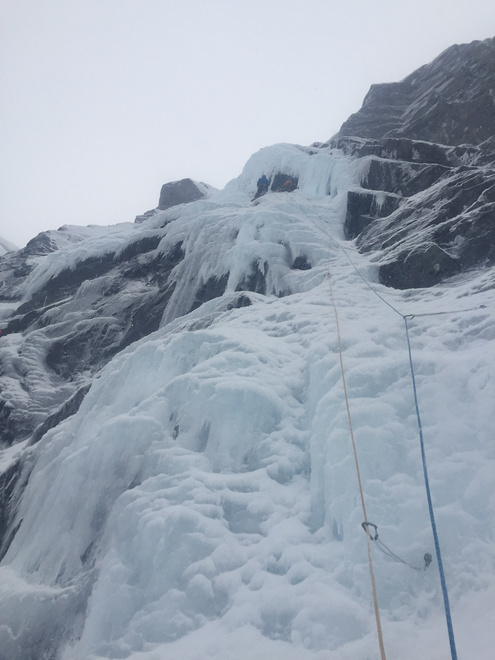 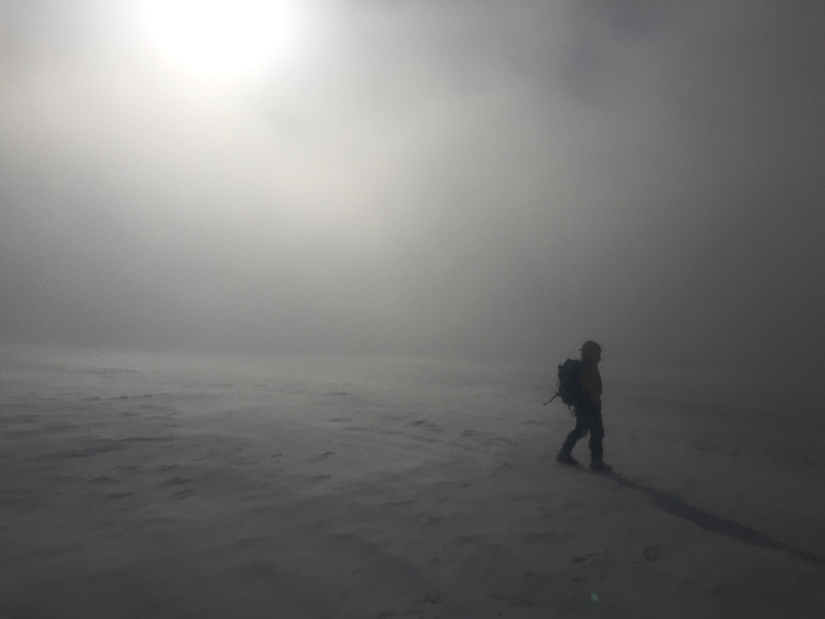 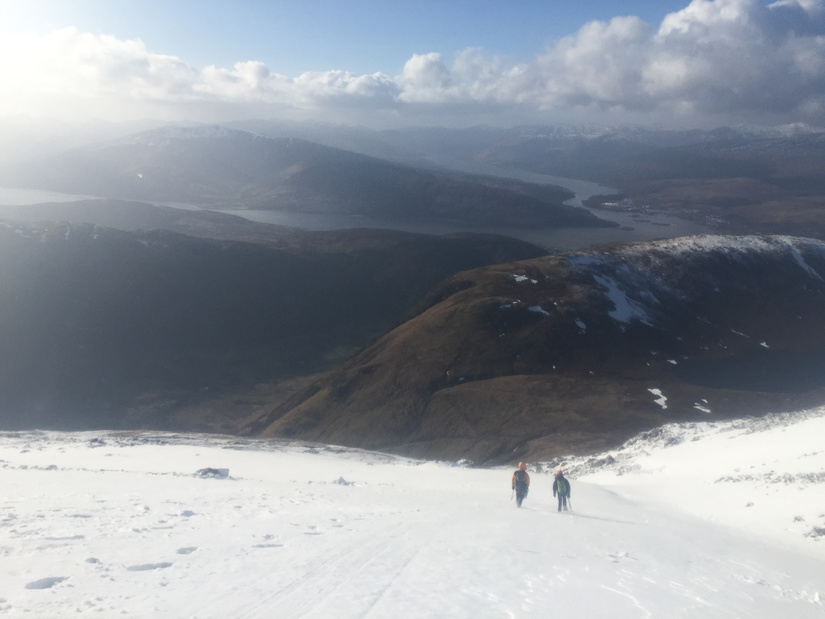 Views on the descent 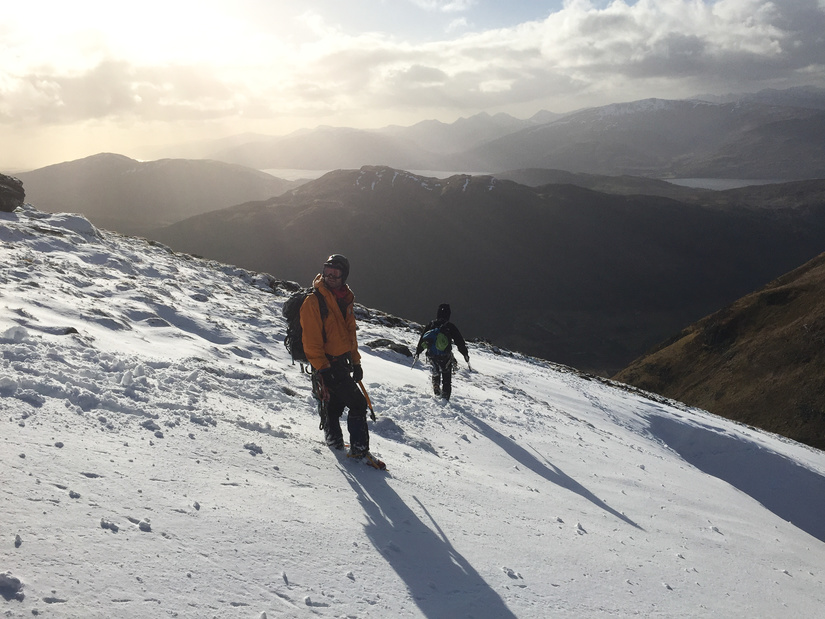 Despite the dodgy conditions it was great to be back out on steep “ice” today given that I wasn’t expecting to get another shot at a classic route this year. Unfortunately this looks like my last trip of the season given that I have plans for the next few weekends.