After a very successful trip the week before last, I headed back up this week with a bit of a questionable weather forecast. On the first morning we woke up in Glencoe to a warm, wet and windy morning so decided against going up into the hills. After all, your willingness to suffer is always lowest on the first day!

After lots of sitting in the Nevis Sport cafe and reading the weather forecasts, we decided to take a bit of a gamble and head up to the north west to have a look at Penguin Gully on Beinn Dearg. This was due to there being less snow up there, an overnight thaw before a freeze from the early hours.

Overnight I kept being woken up by the rain, which seemed to be going on for much longer than it was forecast to, and hadn’t really stopped by the morning. However, after a day sitting doing nothing we weren’t going to be deterred so headed up the long walk in up to Beinn Dearg. It was pretty wet to start with which meant that it was a morning to be covered in gortex, thankfully as the morning went on the weather stated to improve and we had great view down to the valley and could even see the top of Beinn Dearg. 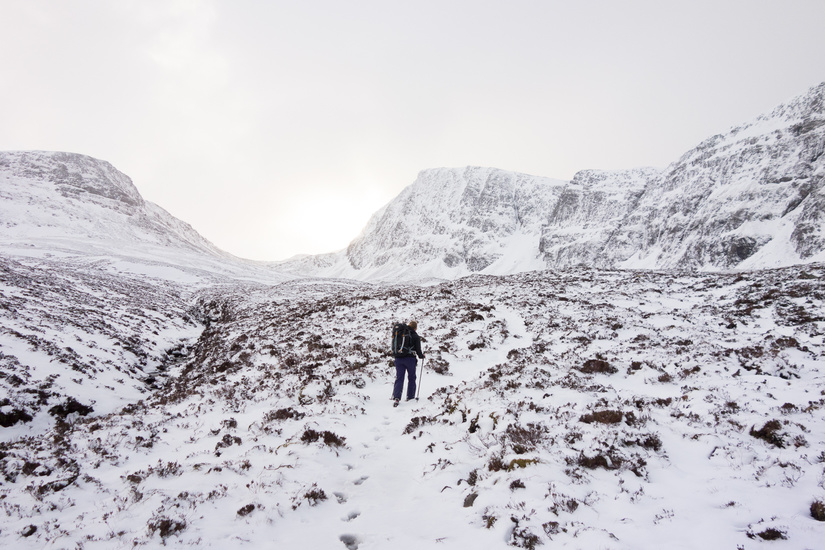 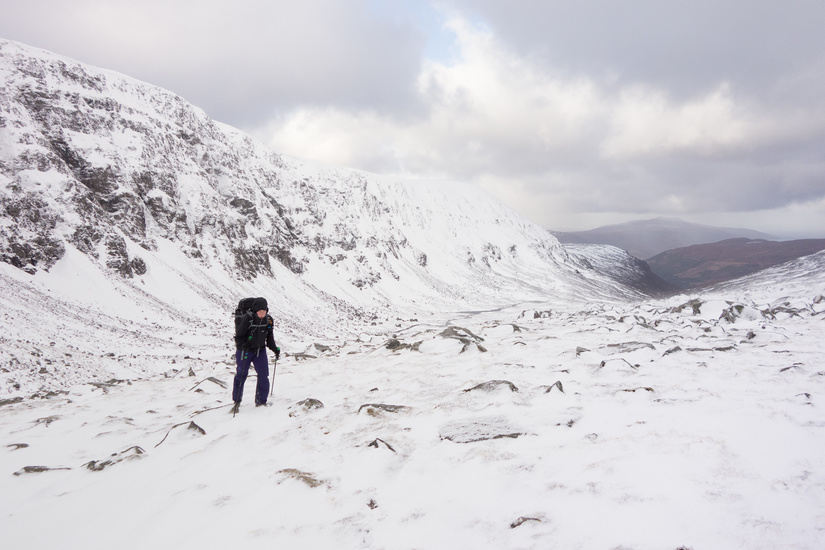 We soon hit the snowline and our progress slowed slightly, but given the underfoot conditions we were pleased to make the base of the route in guidebook time. The approach slopes to the route were scoured and frozen so we decided to go for the climb, which from the ground looked brilliant. It was hard to tell the temperature due to the wind, however given that the icicles above the first belay were dripping and how cruddy the ice on the first pitch was it must have been just above freezing. 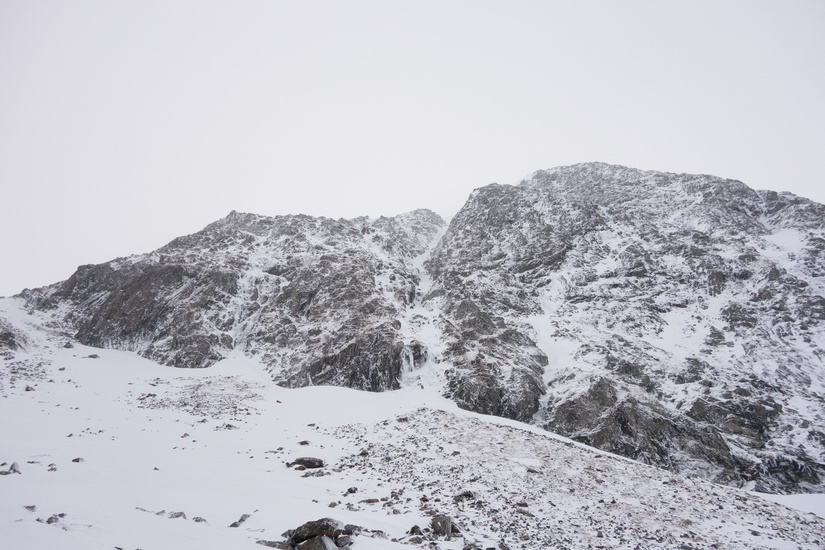 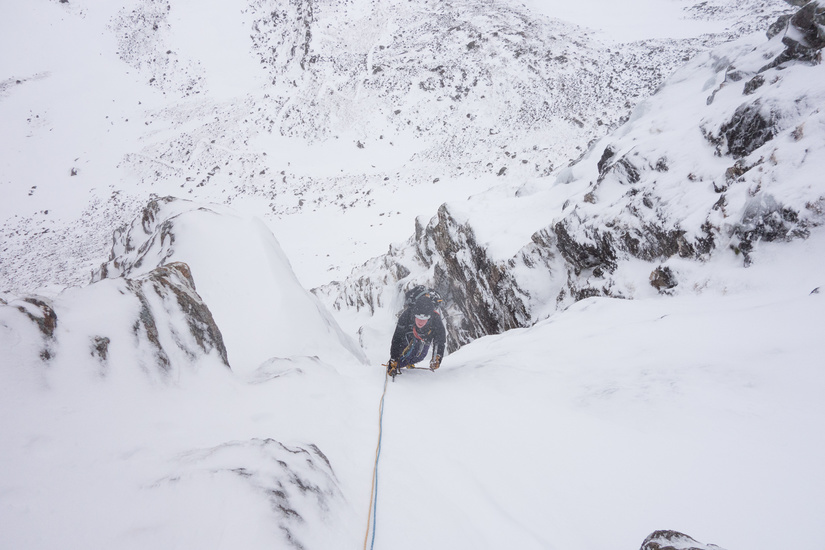 Becky approaching the top of P2

Conditions seemed OK until we got to the top of the second pitch and I headed off on the third pitch. At this point we became sheltered from the wind funnelling up the valley and the slopes above the belay were loaded with a thick layer of weekly bonded windslab, which suggests that the freezing level didn’t rise as much as I was hoping overnight. Not wanting to take the chance, I decided to back off the route, which given how the weather deteriorated in the hour or two that followed may not have been a bad thing anyway!

I made my first two V-Threads and they seemed pretty good and survived a good bit of testing before we abseiled off on them, in hindsight I should have extended the top one a bit more to equalise them… After two abseils we were back at the base of the route without having left anything on the hill apart from a bit of tat. 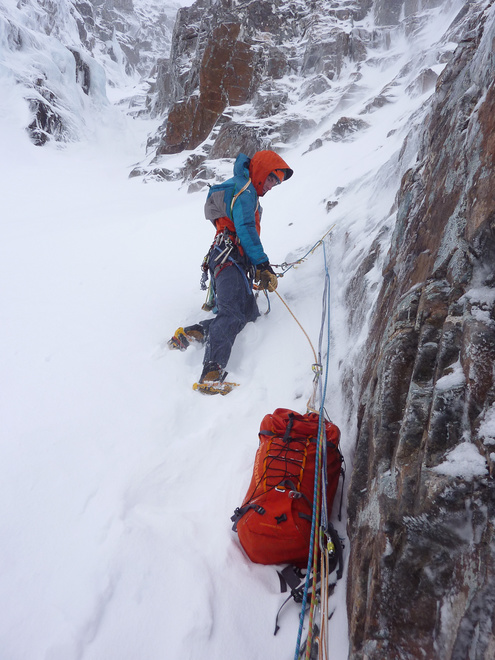 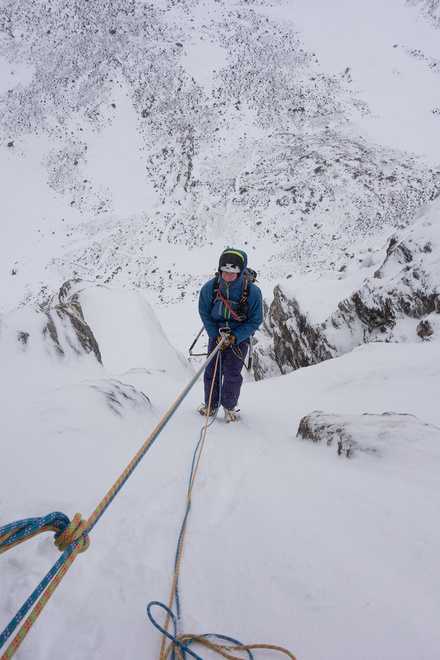 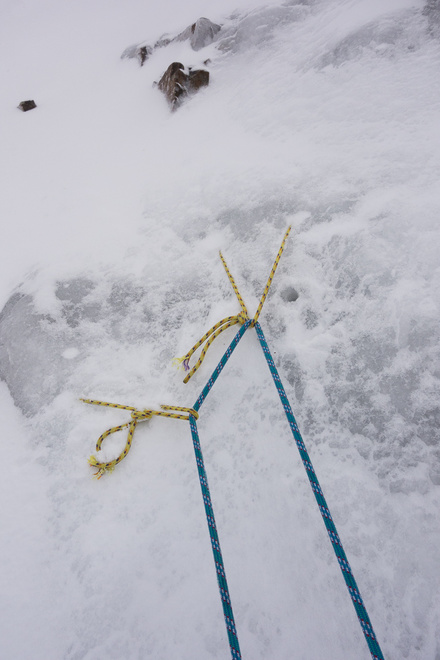 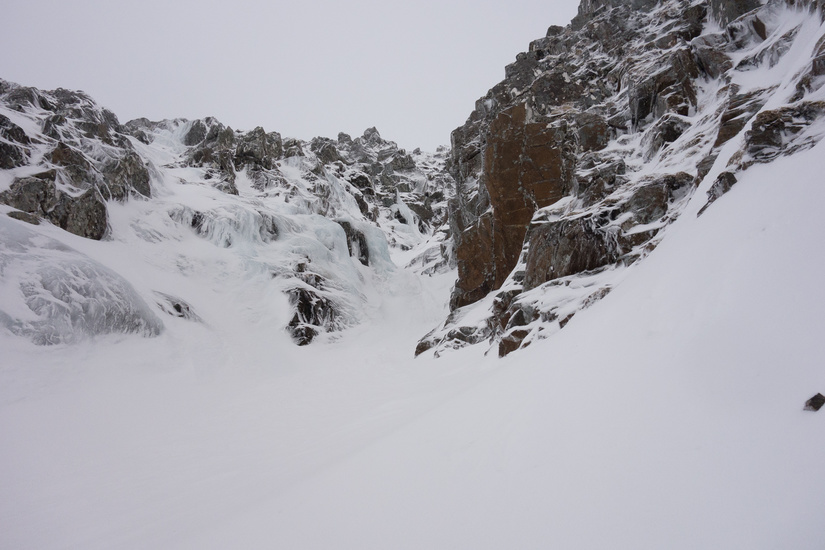 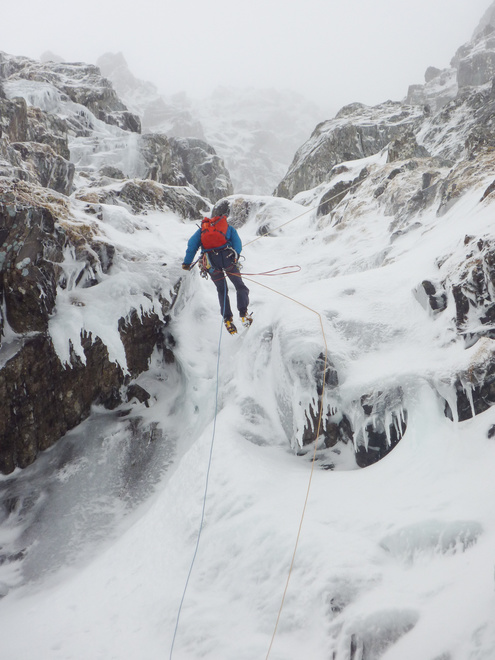 We started the walk out in rapidly deteriorating weather, which was unpleasant while walking into the wind and snow, although this was preferable to the soaking we got on the long walk through the forrest back to the van in the car park.

It’s always a hard choice to back off a route, maybe even harder after a long walk in. This is only the second time I have had to do it in winter. There is always the argument that we shouldn’t have started the route given that we had to back off, but in hindsight I stick to the decisions I made at the time and am pleased that I didn’t get carried away and attempt to ignore the dangerous conditions.