After yesterdays long day on Western Gully in the Black Ladders, the aim of today was to have an easier day out so we decided to head to Clogwyn Du due to it being a more friendly crag that was closer. The walk in did not feel any easier as we made the never ending slog up to the crag in the cloud, made worse by having to chase Nick up while trying to ignore what my legs wanted to do.

As we got to the gearing up spot the cloud dropped below us and revealed the crag in fine winter conditions. Despite being at the crag shortly after 8, and overtaking a number of parties on the walk in we discovered we were fourth in line for the route we wanted to do, Left Hand Branch. As the route looked like it was in brilliant condition we decided to wait in line for the route. 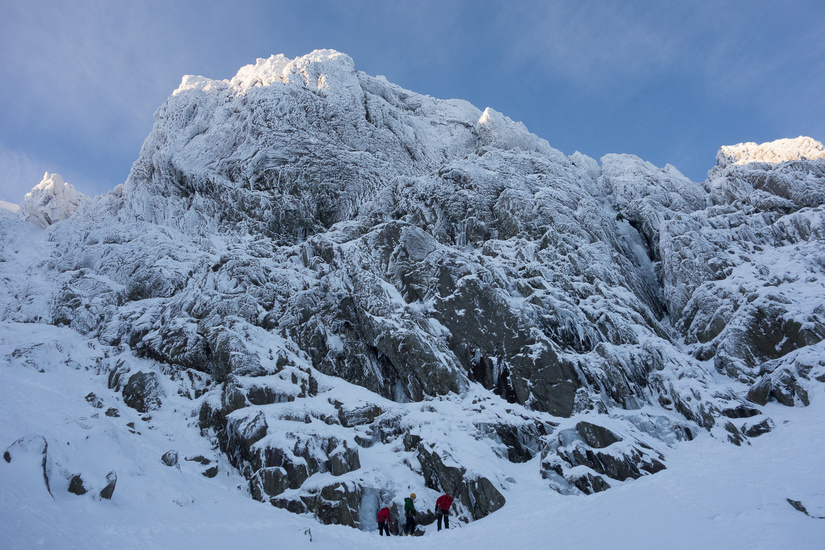 Clogwyn Du in the morning 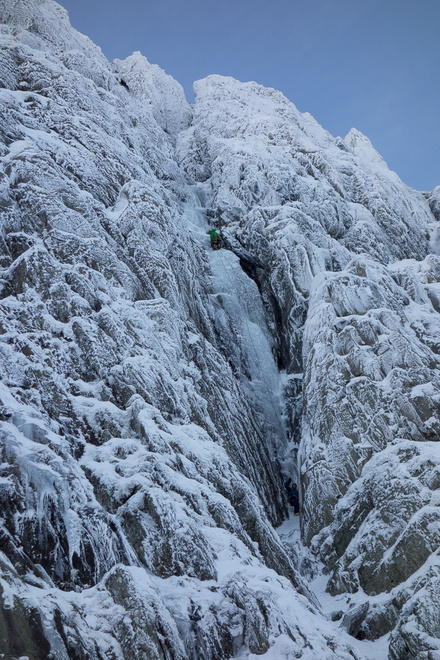 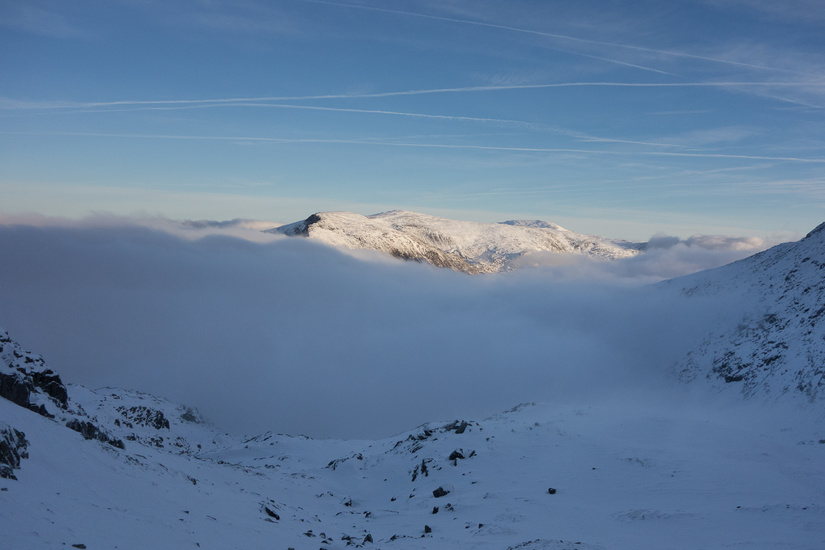 View towards the Carneddau as the inversion formed

The problem with following other parties up ice gullies is that you have nowhere to hide when parties above dislodge ice. The team in front of us learnt this the hard way as one of the team took a pretty large lump of ice on his back. We soloed up the first easy pitch to discover the team on front of us sorting out their ropes to lower the injured member of the party back to the base of the crag. Thankfully they let us pass while they were sorting their gear and we made quick progress up the route as it was like a ladder with lots of hooks. In the current conditions the route is much easier than the specified grade V.

Nick got the main pitch due to me getting more of the good pitches yesterday, it was a great pitch which would have been fantastic if it had not been hooked out, I’m not sure either of us actually swung our axes on the first pitch. The second pitch was easier but longer and after a 60m rope length I was soon at the top, basking in the sunshine and admiring the views. The ice was so thick all the way up, if you wanted to it would be possible to lace the route with gear, however due to the conditions Nick and I only placed 4 screws each. 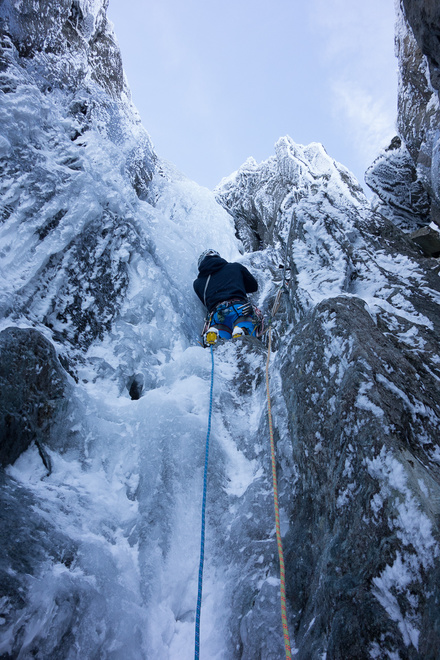 Nick on the first pitch of Left Hand Branch 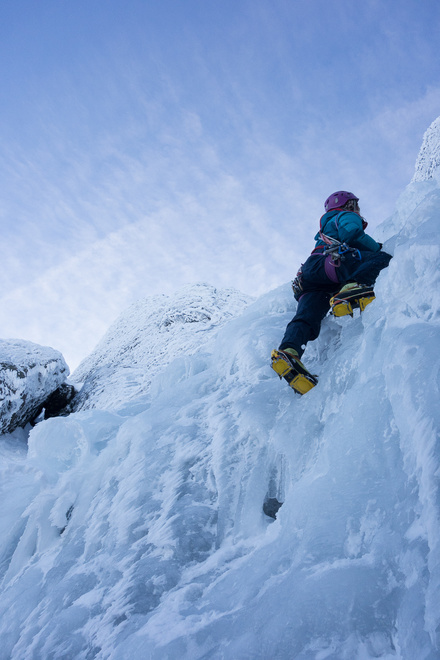 The party ahead on the second pitch of Left Hand Branch 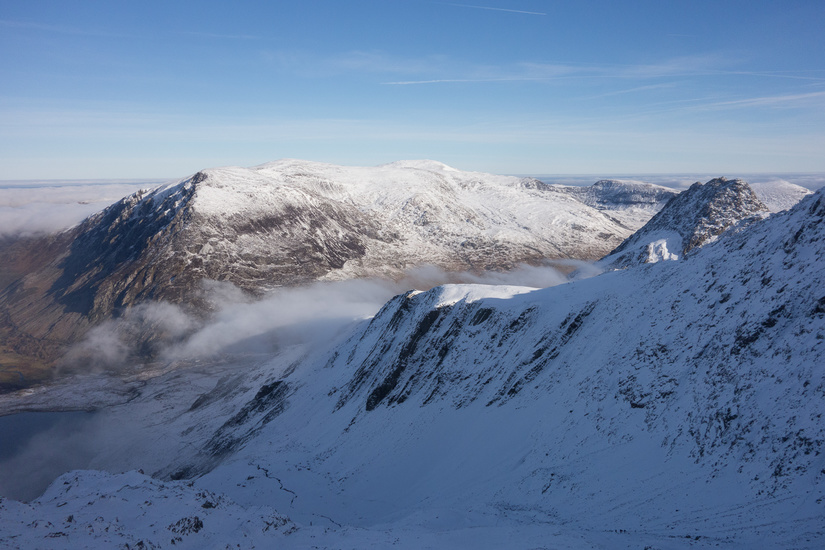 Stunning views towards the Carneddau 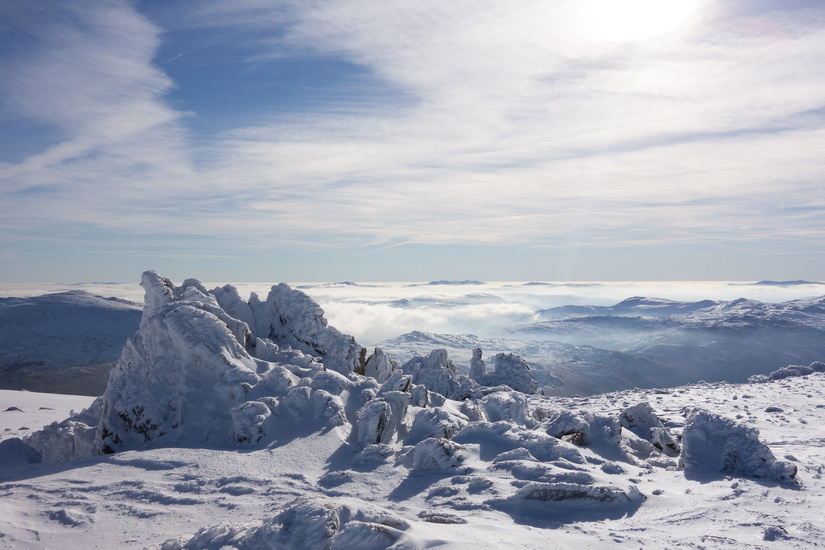 View towards mid wales from the top 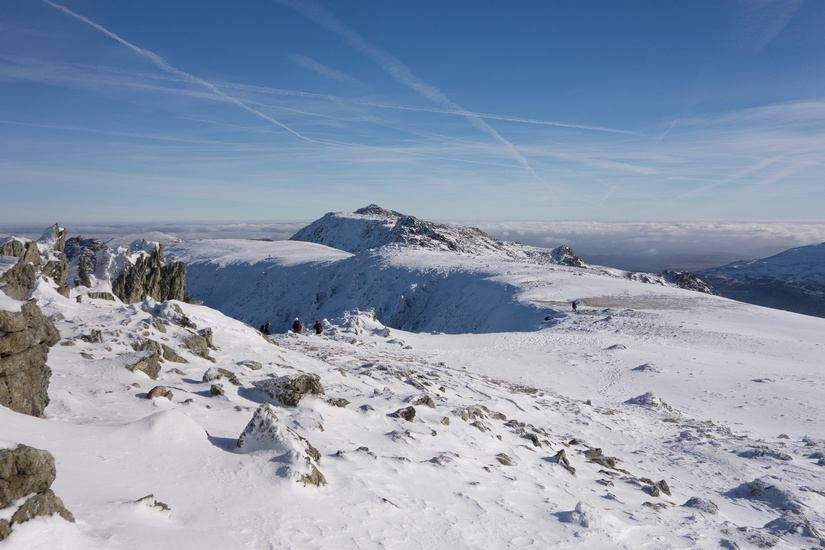 The Carneddau above a brilliant cloud inversion

After admiring the views in every direction we headed back down to the base of the crag to have lunch. As it was only midday we decided to head up another route, we chose a route Nick had been eyeing up called El Mancho. This was a three pitch VI, 7 (3, 5/6, 7) and according to the grade was going to be the hardest thing that either of us had climbed. Descending back down to the base of the crag 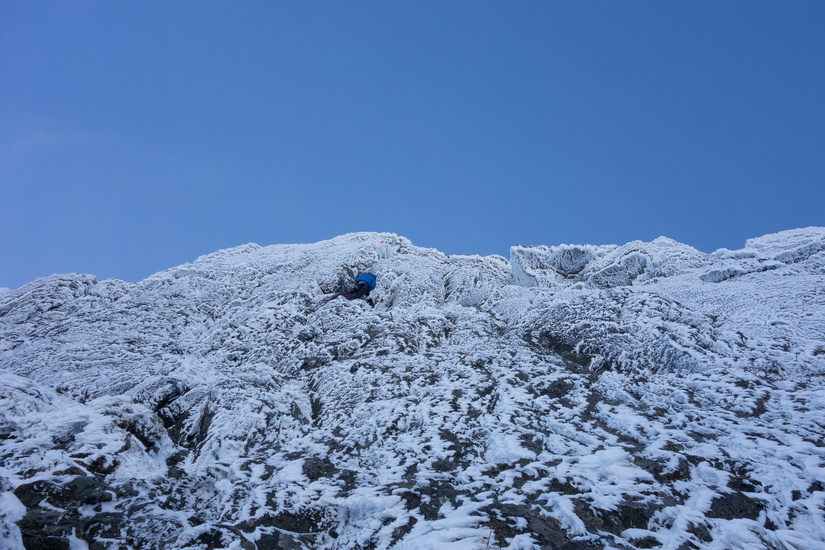 The team in front on El Mancho

We made quick progress up the first pitch, where the axes were more of a hinderance than a help and ended up at a very crowded belay due to a number of parties heading up Pillar Chimney. After the team in front of us had started to move, I apprehensively set off up the second pitch and soon all doubt left my mind as I quickly found good gear and well frozen turf. After a short bold, balancey section I got to more gear and the start of the steeper part of the pitch and after a few more steep pulls I was soon at the top off the difficulties and just had to traverse to the belay. After yesterdays bold climbing it was brilliant to be on technical ground while feeling safe and able to enjoy the climbing at the time. 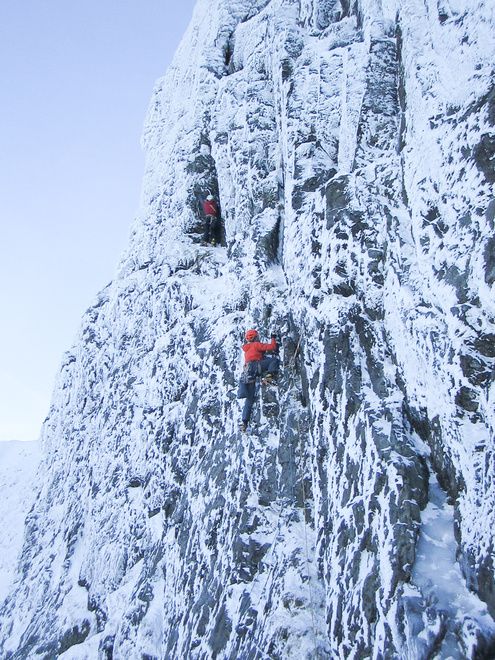 Me on the second pitch of El Mancho (© Geoff Bennett)

While Nick was making quick work of seconding the pitch a sea king appeared landed on Y Gribin, not sure if this was for an actual rescue or for practice. Nick soon set off on the main pitch and went out of sight, the rope kept going out at a reasonable rate and soon I got the call that he was safe at the top. I headed up the pitch to discover that it was full of excellent hooks and torques with plenty of good gear. There was a really odd move to the left near the top that involved having to lie down on a ledge, very surreal!

After another short section I was soon approaching the top and back into the sunlight. After a short chat with another team who were out who had made short work of the very steep and intimidating looking ice fall outside of Pillar Chimney we headed back down to our bags for the start of the long descent. 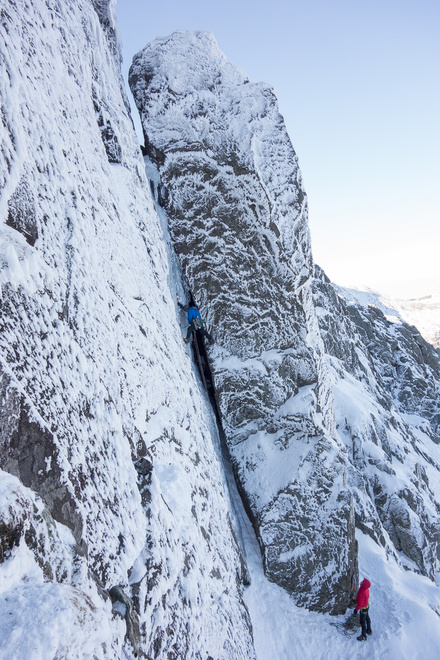 Another team on the icefall variation of Pillar Chimney 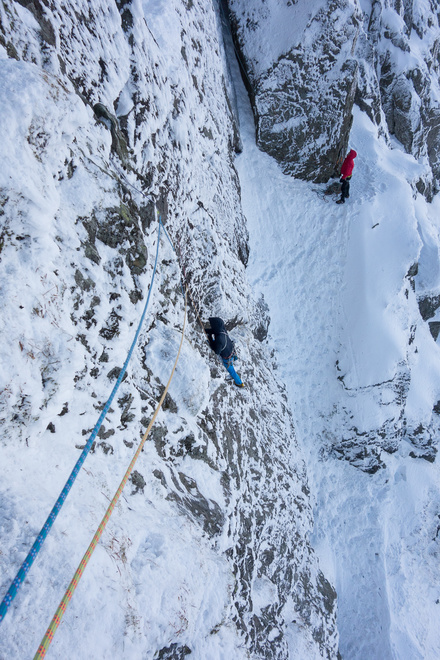 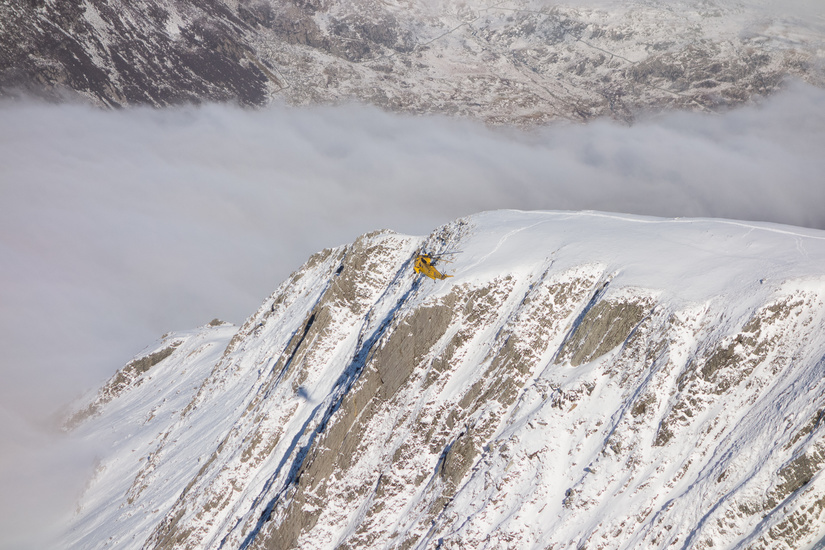 A sea king above Y Gribin 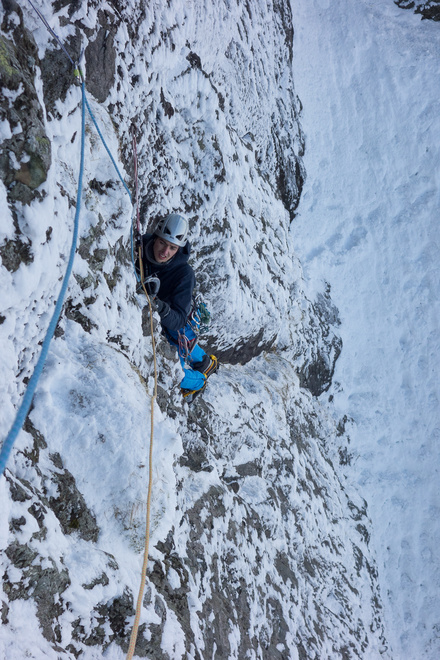 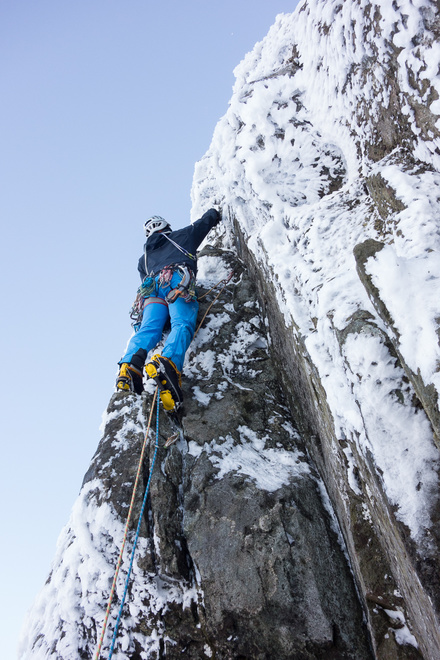 Nick setting off on the final pitch of El Mancho 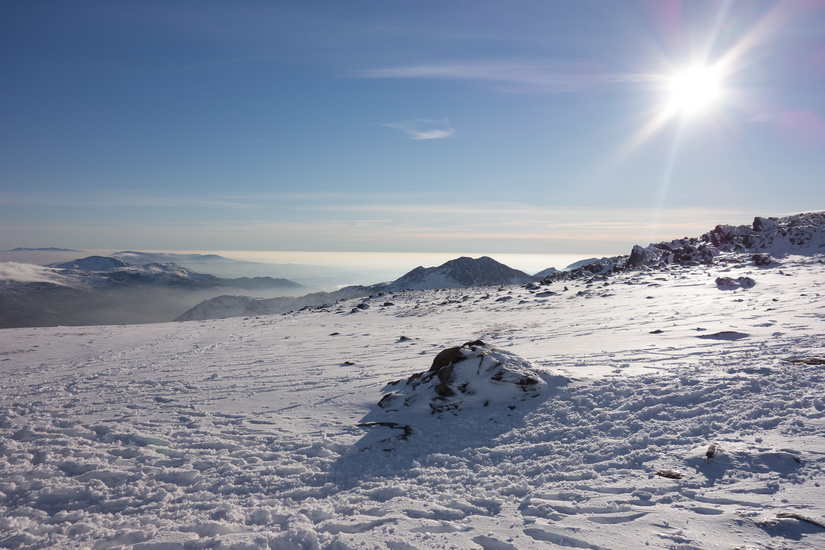 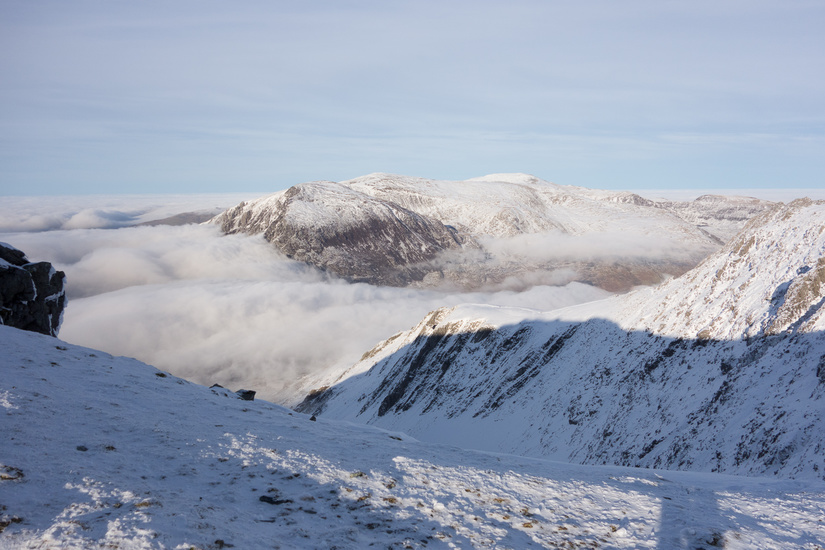 Evening view towards the Carneddau 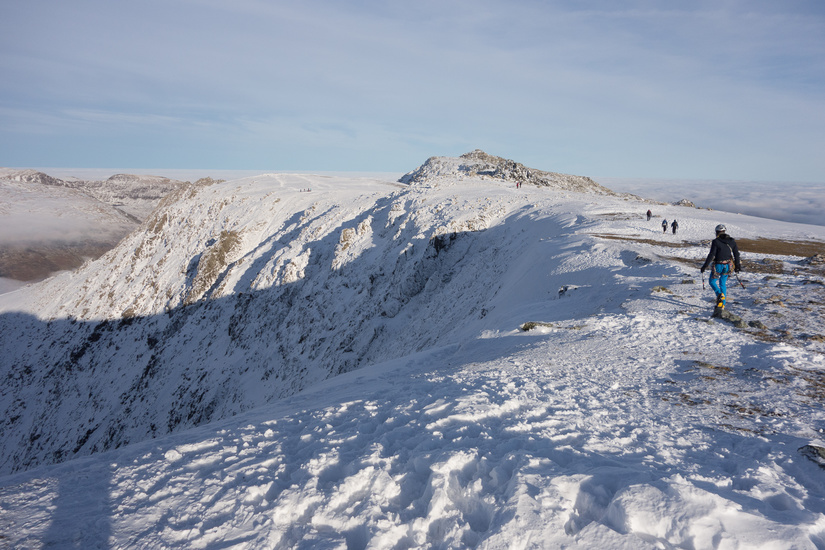 It was a brilliant day out with two classic routes having been climbed, out of the wind, above an inversion and with fantastic views from the top. Climbing at Clogwyn Du seems so much less intimating that at big crags like the Black Ladders due to it being packed with people, with short routes that you can climb without a pack. We both found the VI, 7 we climbed today both technically easier and much better protected than Western Gully which is given V,6 so it was certainly in tough conditions yesterday.

Due to climbing two routes, our short day turned into another pretty long day as we weren’t back at the car until 5 which made for a 10 hour day. With the temperatures rising tomorrow I am looking forward to a lie in before heading back to Bristol at a reasonable time.