All Alone on Zero Gully

I have plans to spend next week in Scotland with some friends from university, however with a decent forecast and fantastic conditions I was unable to resist the urge to come up a bit early and do a bit of climbing. My aim for the day was another big classic Ben Nevis route, Zero Gully, which has a reputation for being a very serious route.

I was climbing with Tony who I met off UKC, it was very odd meeting my climbing partner for the day for the first time in the car park as we were sorting gear. We had a relatively leisurely start as Tony had to drive across Scotland, and I only arrived in the car park at 2am so was grateful for a bit more sleep, although four hours is not really enough… We made good time on the very warm walk in and thankfully as we gained height the temperature started to cool and by the time we arrived at the snowline we were greated with a firm snowpack, which makes a nice change compared to my last few trips. 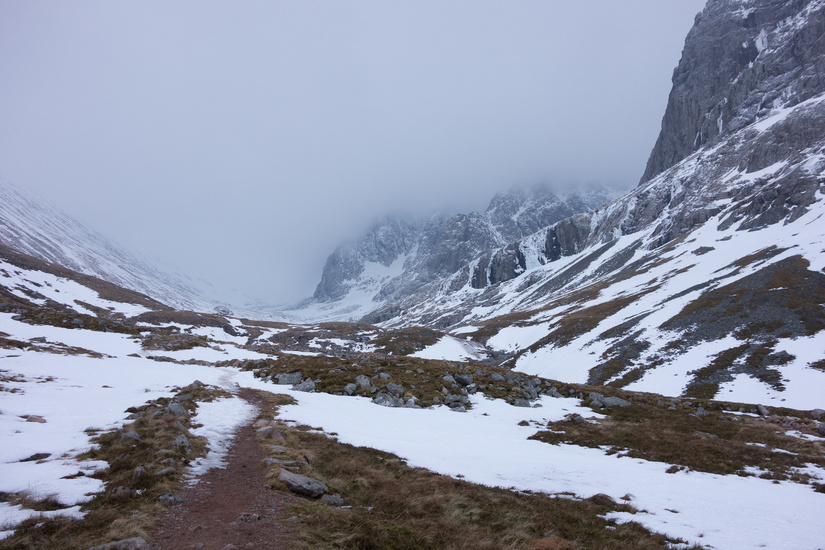 Due to our leisurely start we were expecting other people to be heading to Zero Gully as it is on of Ben Nevis’ classic gully climbs, however we were very pleased when we discovered that no one else was heading towards it in front of us, and that we couldn’t see anyone behind us. This meant we were able to head up to the gully without having to rush in order to try and be the first in the queue. 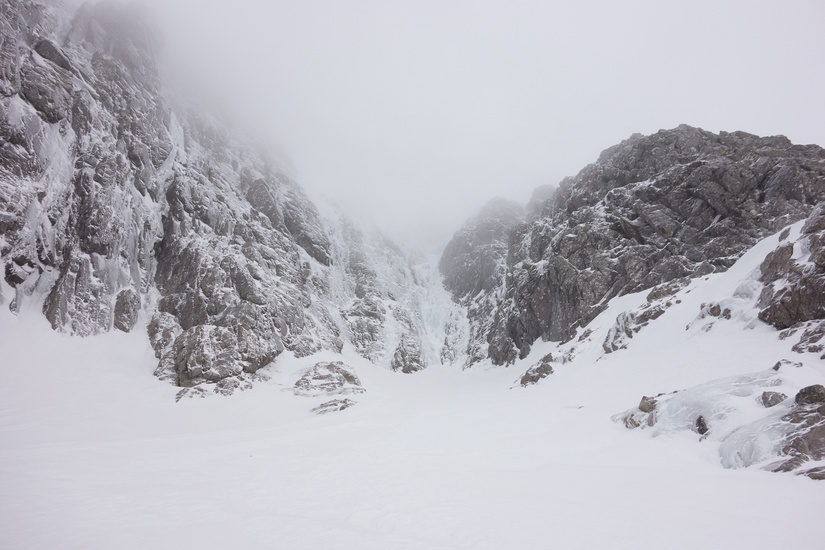 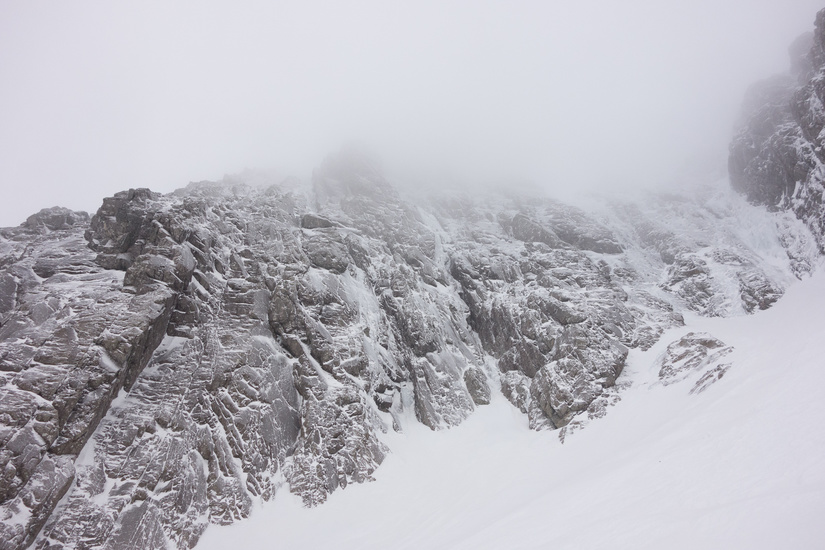 The first pitch was a good warm up with superb plastic ice with first time placements all the way, it was however fairly bold as the ice didn’t take screws well. I then set off up the second, crux, pitch. I headed up a bit more directly than the guidebook suggested as the ice just looked fantastic, and it was brilliant to be on the sharp end on un-hooked steep ice for the first time this season.

The pitch was fantastic, with mostly first time placements all the way up, although I did get in a fight with some dinner plating ice and cut my lip and nose… There was reasonable protection, and the opportunities to place ice screws were only limited by having 5 ice screws for the pitch (2 in each belay).

After a long pitch of over 50m I got to a point I could belay and managed to get two awful screws which were backed up with my ice axes, not too bad given the horror stories I have heard about the belays on Zero! 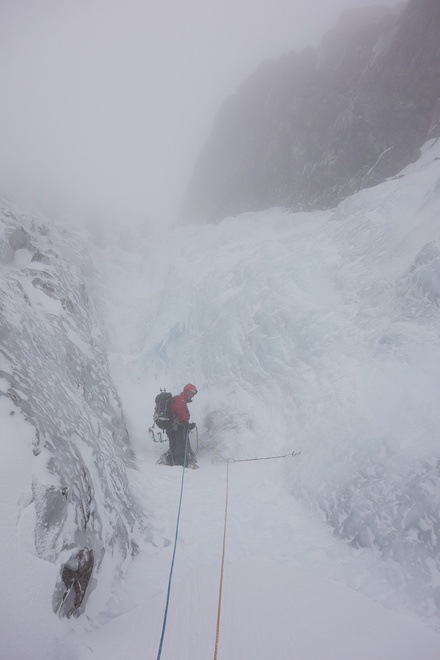 Tony at the first belay 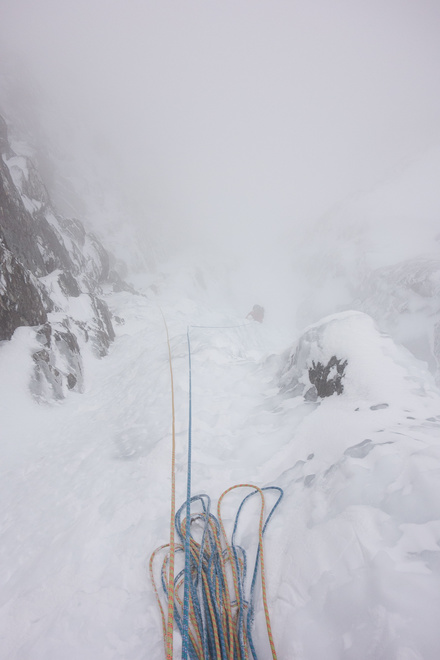 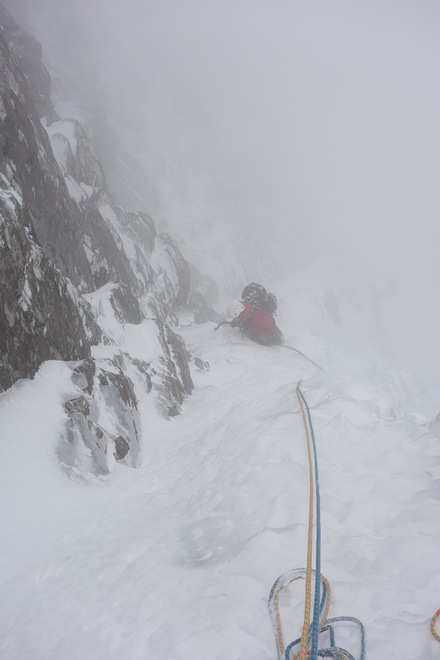 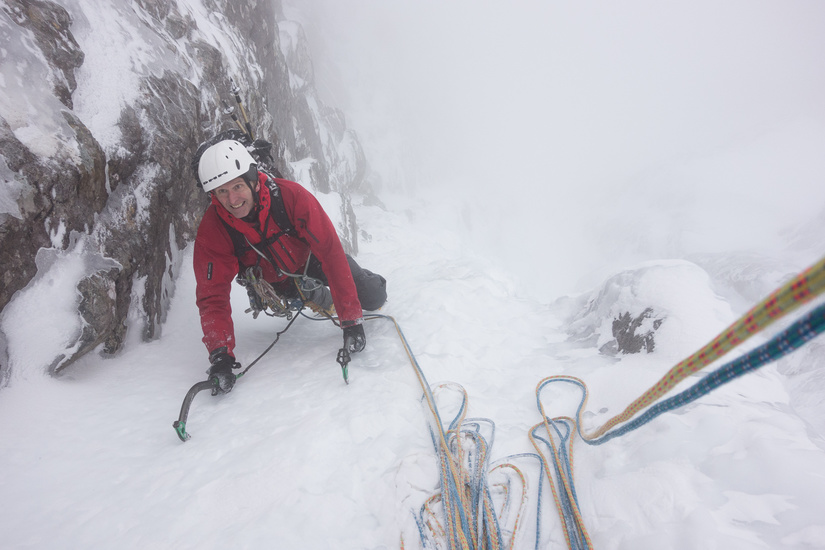 There were 2 more pitches with relatively steep climbing, we both really enjoyed the climbing all the way up and got to the end of the steep sections raving about the climbing, and how nice it was to be climbing a classic gully with no one else around. After the steep sections, a seemingly never ending gully which was around II/III went on and on for another 5 60m pitches. This was made worse by the very thick hill fog which meant that we couldn’t tell when we set off on a pitch if it was going to be the last. 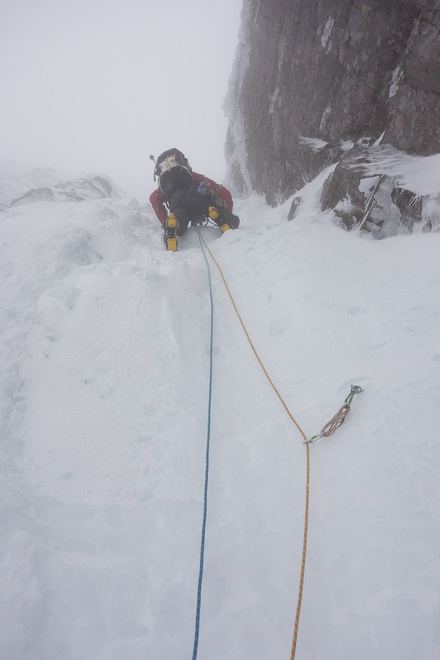 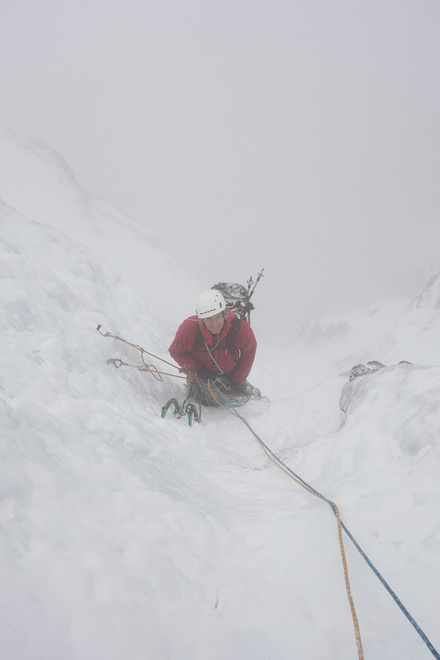 Nearing the top of the steeper sections 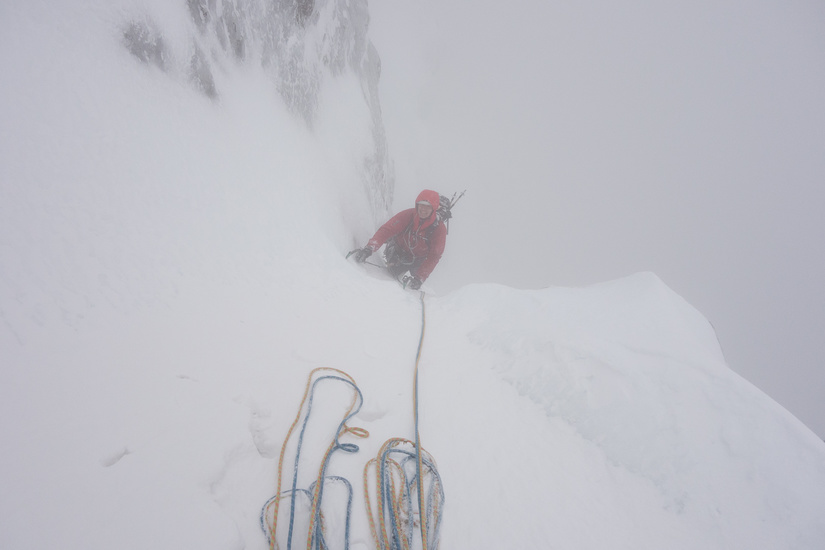 When we got to the summit we packed up quickly and made our way down as the wind was fairly cool, the conditions were terrible on the summit and after lots of pacing and walking on bearings we appeared at the top of number 4 gully as the clouds briefly cleared. There is a large slot in the cornice which made it possible to descent without abseiling, although this did feel a bit airy as the slot is fairly narrow and some of the steps are pretty large. 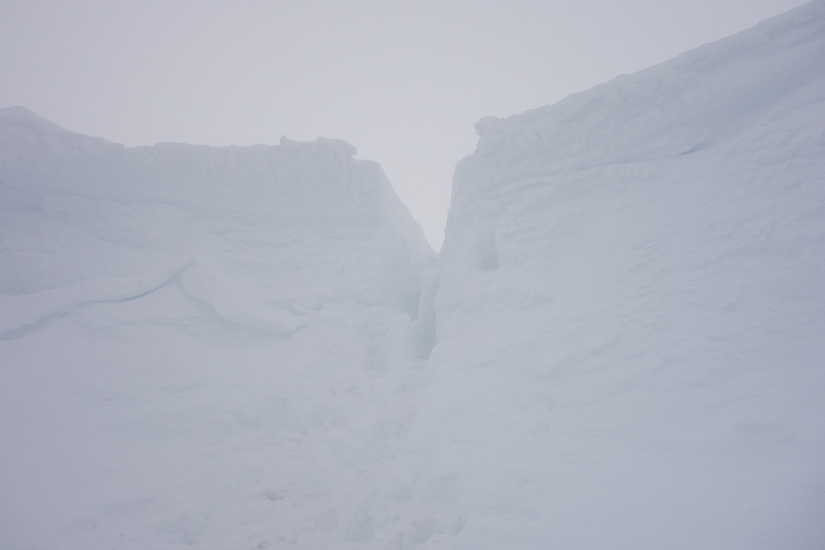 Slot in the number 4 gully cornice

We were soon in the Coire na Ciste and admiring the ice in the brief clear spells which appeared as we descended. Mega route X looks absolutely fantastic and is definitely now on my tick list, we also had a good view of the curtain and a team on it as we descended which looks fantastic. 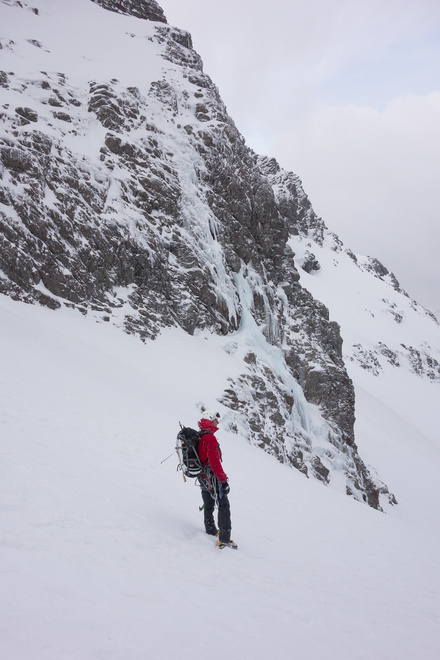 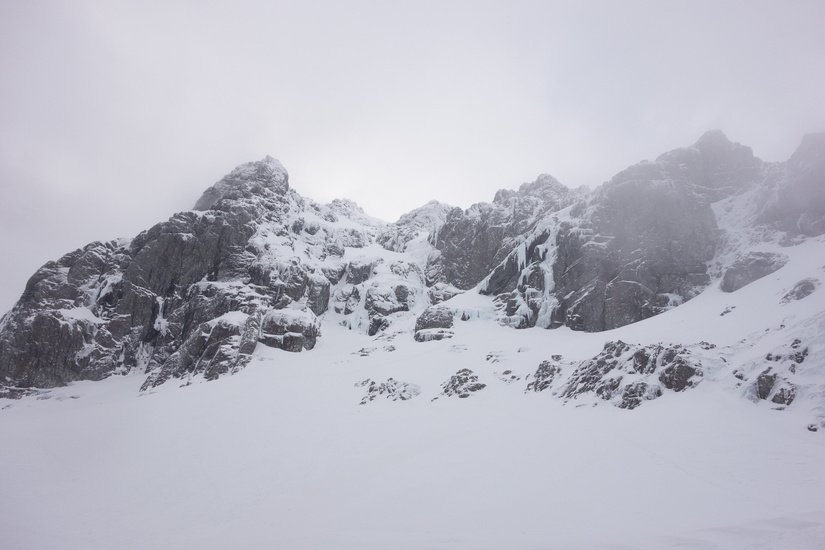 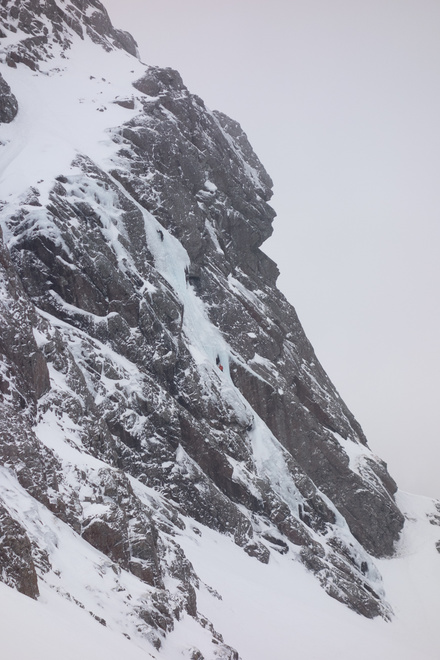 Climbers on the Curtain

After a long walk out we got back to the car 11 hours after we set off, having had a fantastic day climbing a classic grade V gully on Ben Nevis with no one else around to kick ice down on us or to make us feel like we needed to rush.

It’s amazing how much easier the walk in feels when compared to new year, it’s nice to know that all these days out are starting to improve my hill fitness again!

2 Responses to “All Alone on Zero Gully”