I was pretty keen to get out today after spending a blue sky day in bed yesterday due to feeling ill, however the forecast was less than promising. We decided to head up Aonach Mor due to the lift allowing us to have a lie in, surprisingly due to the wind the chair lift was running which enabled us to get very high on the mountain without doing any work. 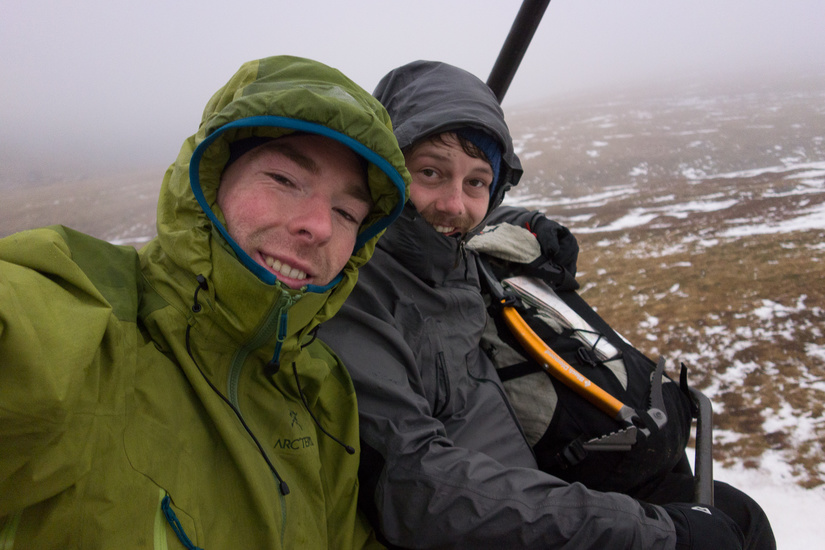 Conditions on the mountain were terrible at the start of the day, with warm air, hill fog and lots of wind. We made our way up to the summit hut and were sheltering behind the hut trying to decide if it was worth going for a climb. Eventually we decided to abseil down Easy Gully and have a look, with the idea that if the conditions were bad then we would walk around to the climbers col. 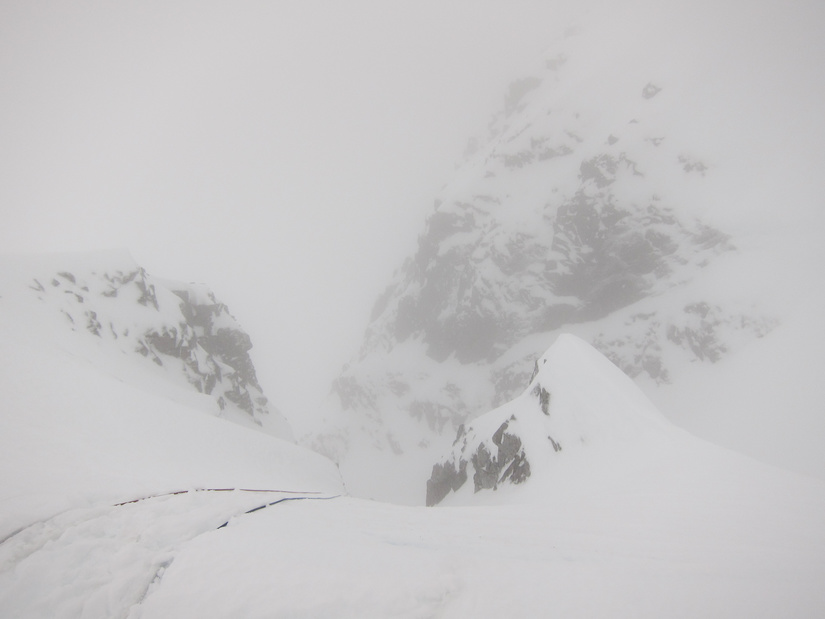 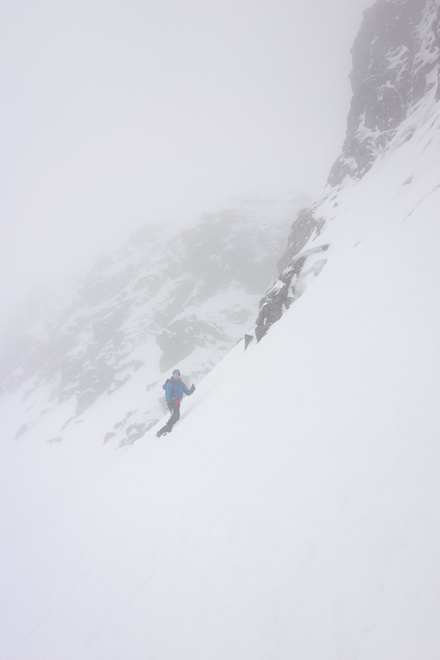 Traversing to the base of the route

As we made our way down Easy Gully we met up with another pair who were heading for White Shark, which looked like it was in pretty good condition, but I don’t know how they got on. As we got to the base of our route we saw another team on Typhoon which was reported to be in fantastic condition.

Morwind was a brilliant climb, which was harder than I was expecting. This meant that Steve had a sharp introduction to Scottish winter as this was his first winter climb. Half way up the first steep step on the first pitch I had some added excitement thanks to my crampon deciding to fall off, after making a few more tenuous moves I managed to get a good bit of gear which I could rest on and fix my crampon. 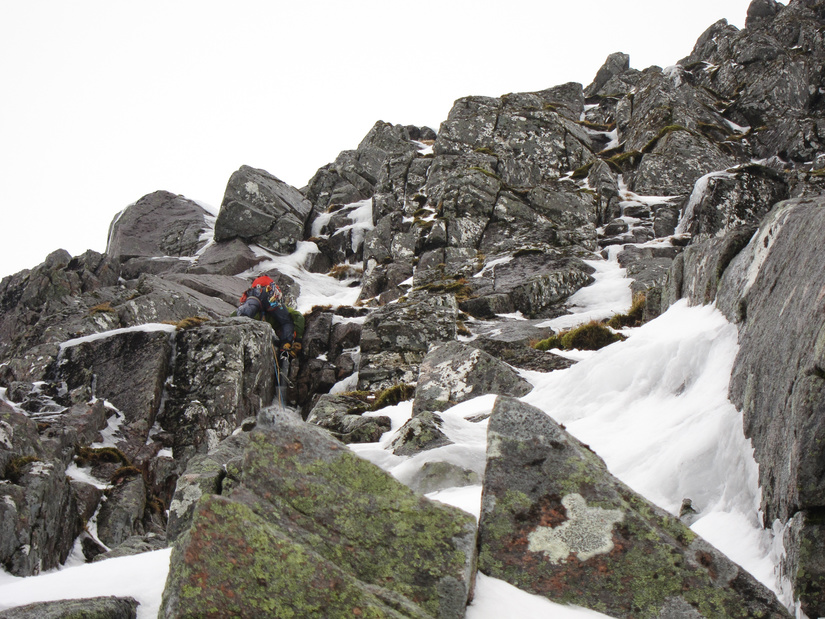 Fighting to put my crampon back on…

The climbing was great with good soft ice with first time placements on the steep steps, and due to the warm weather the cracks were clear of ice which made the protection relatively easy to find. The turf was all still well frozen, although there was lots of useless snow in inconvenient places. The route was constantly interesting all the way to the final snow slope below the non-existent cornice. We climbed the route in 4 pitches, two up to the bay below the small cave, one to the end of the mixed section and one up the final snow slope and over the non existent cornice. 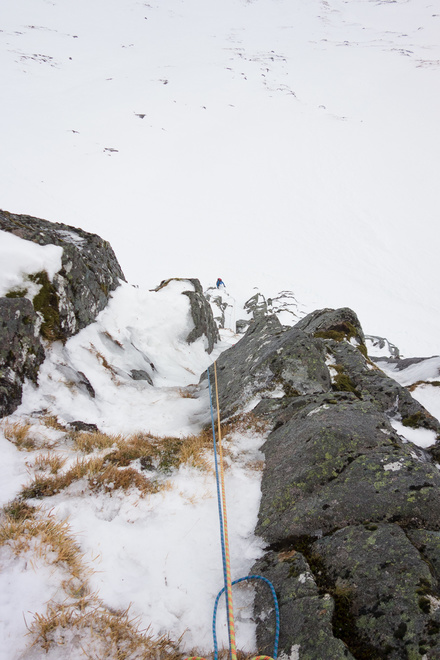 View back down P1 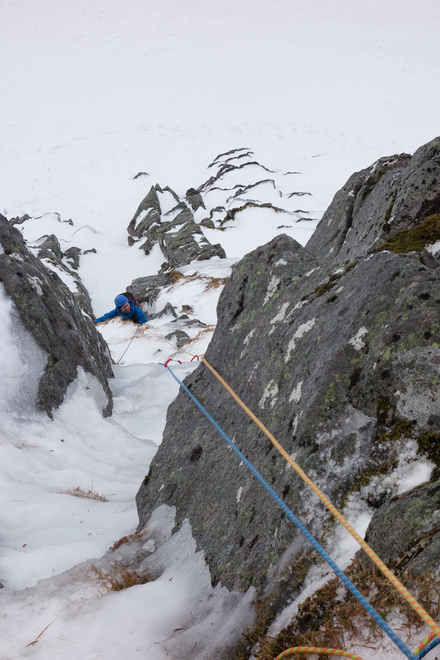 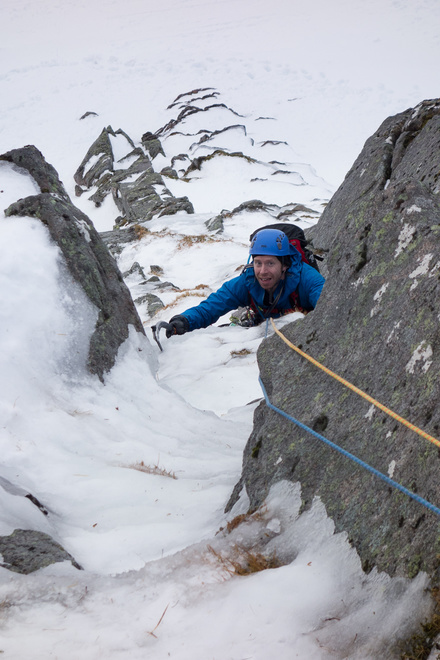 Steve near the top of P1 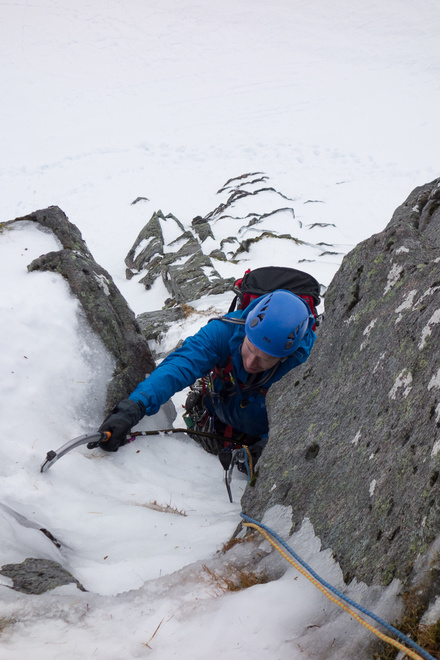 Steve near the top of P1

As we climbed the weather just got better and better with the cloud lifting and the air temperature dropping. This lead to some fantastic, atmospheric views as we had an inversion to the east and blue skies above us.

We topped out as the sun set over Ben Nevis which was still topped with clouds, at this point we made a mad dash back down for the last lift and just made it in time, still dressed in all our climbing gear. 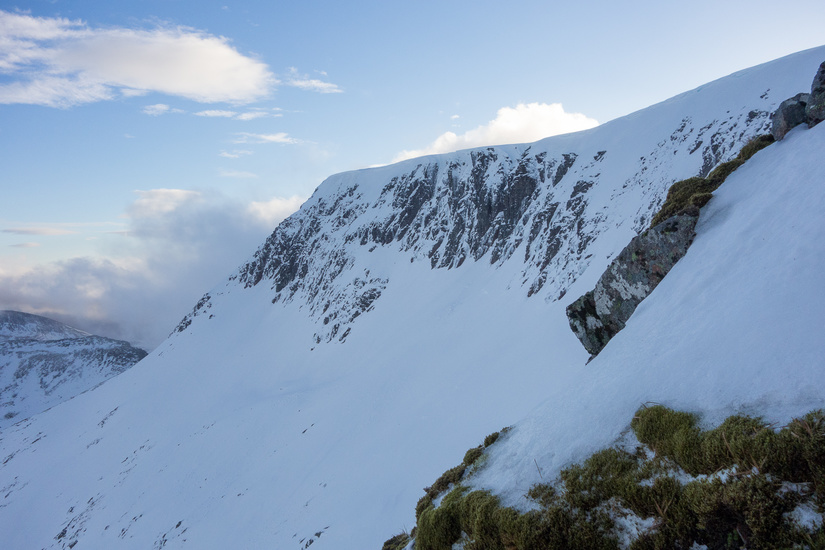 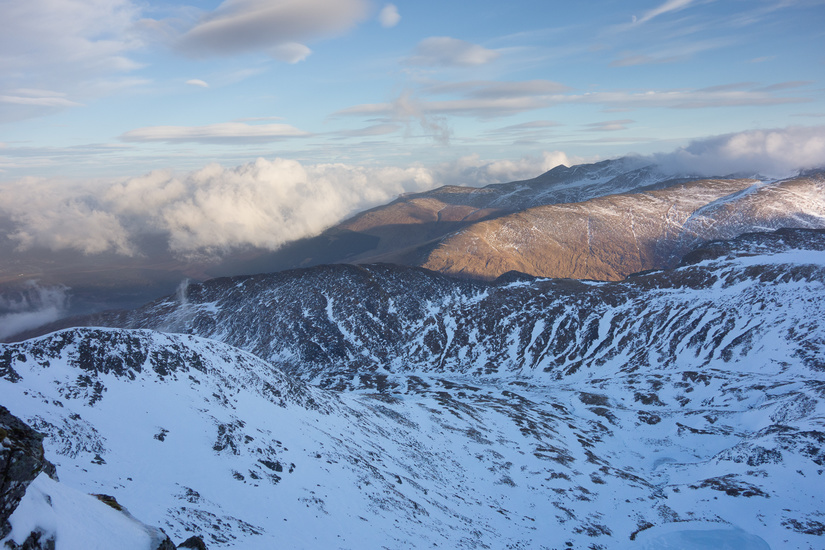 Stunning views towards the east 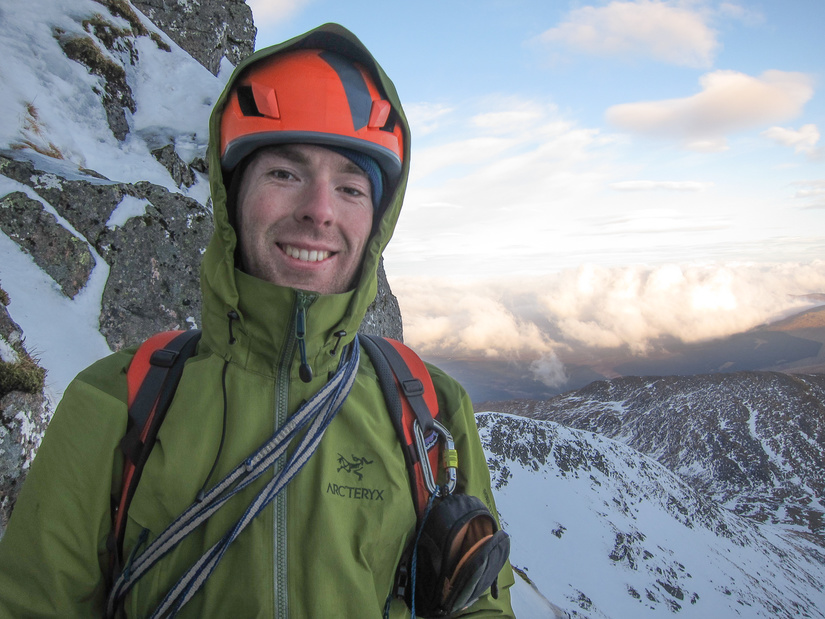 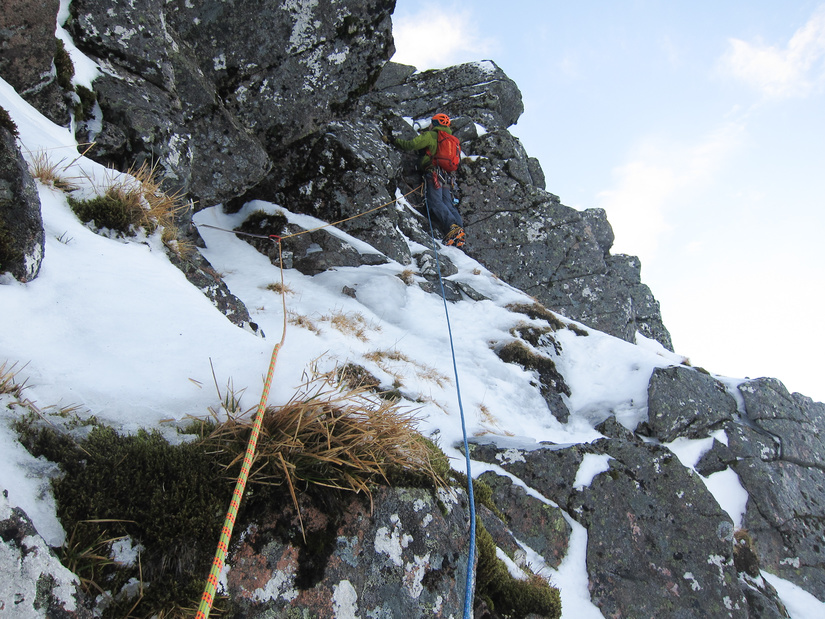 On the final pitch

Steve at the top of the final pitch 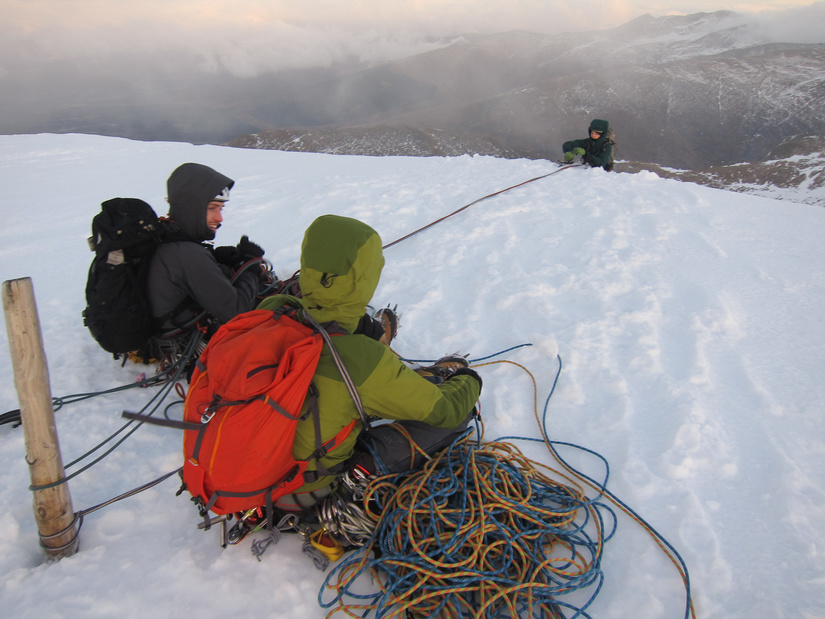 Handy belay at the top 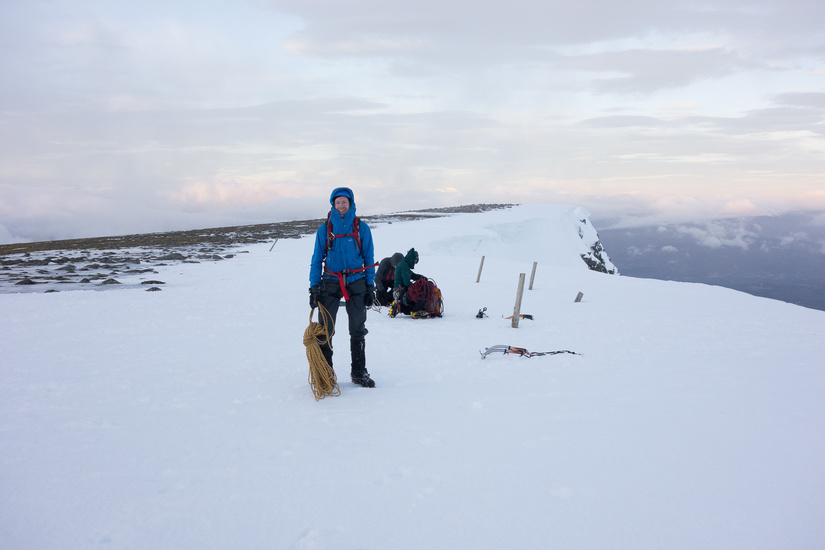