I had a brilliant first winter climb of the season today, and what a contrast to last year as the weather and conditions were fantastic. We climbed Green Gully. and the conditions were fantastic. We had first time placements all the way up, some of the gear wasn’t brilliant due to this and the top belay above the last crux step was awful. The climbing was brilliant and the route was not banked out or stepped out at all which made the climbing much more enjoyable.

The walk in was beautiful as the sky was completely clear and starlit, it was a shame that there was no moon as I have fond memories of walking into a moonlit Ben Nevis. Due to a very early start it was still very dark by the time we were at the CIC hut and started the next slog up into Coire na Ciste. During this walk we met up with an SMC member who had been staying in the CIC hut, apparently Point Five was climbed yesterday and was reported to be in good condition. 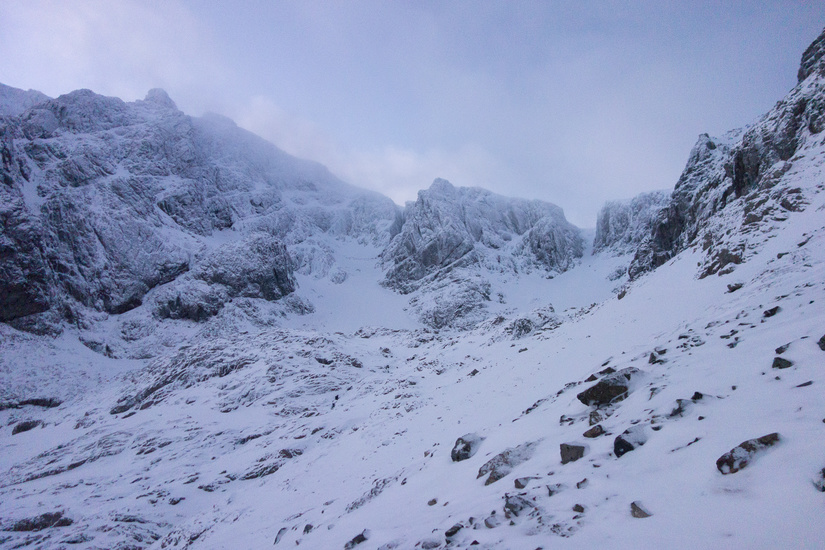 Walking into Coire na Ciste in the morning 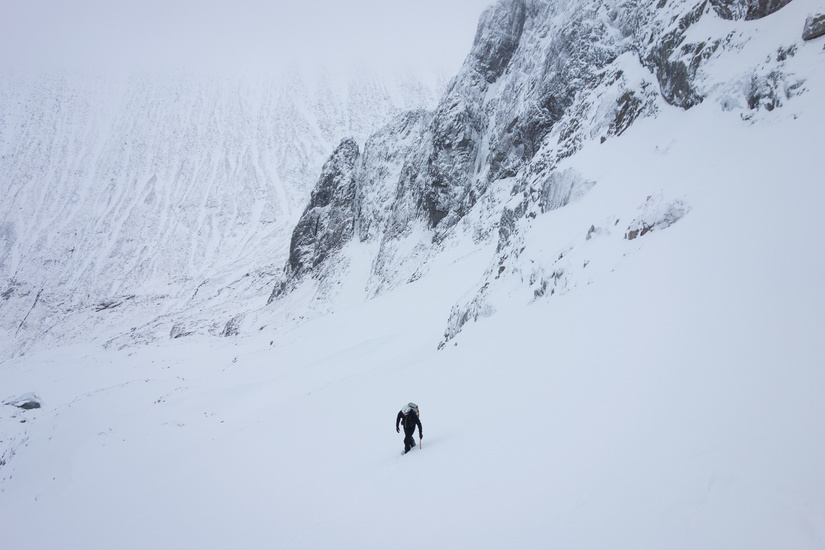 Walking into Coire na Ciste in the morning

The snow was not ideal for walking up, but it wasn’t too hard going thanks to a trail most of the way. We almost made it to the base of the route without needing crampons. We were heading for Green Gully as there had been reports that it had been climbed recently and was in good, non banked out conditions. We were pleased to get to the route and find that we were the first team heading for that route, everyone else seemed to be heading for harder mixed routes.

As I made my way up to the first belay I was pleased to find excellent ice for two screws, we quickly sorted the ropes before Tom headed off up the first pitch. As Tom was climbing the first pitch he got assaulted by a large quantity of spindrift, which thankfully didn’t reappear on any of the other pitches. Due to another party arriving we decided to run the first two pitches together by moving together in order to separate ourselves from the next party. 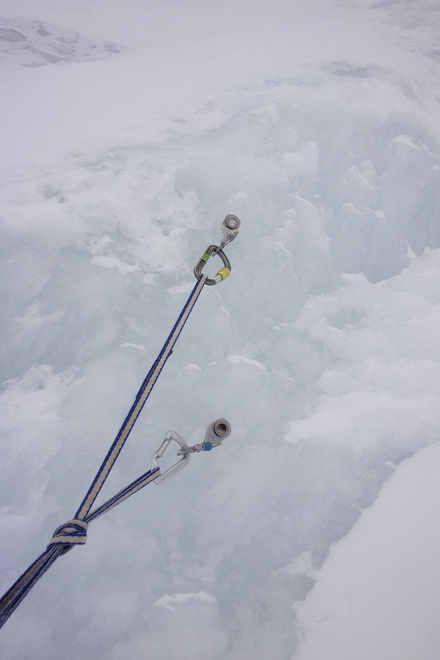 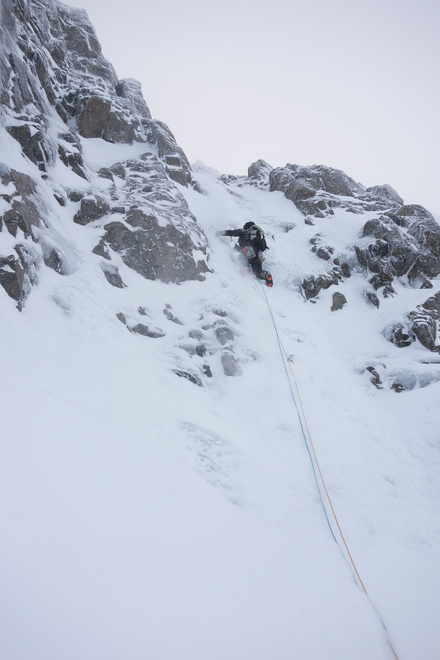 Tom on the first pitch 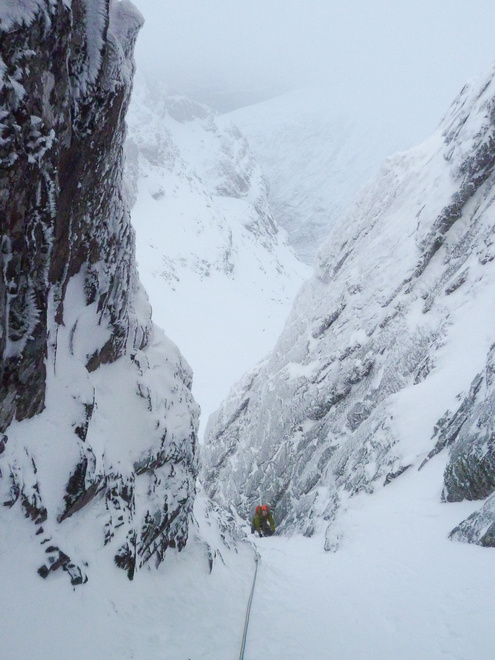 Me arriving at the top of the second pitch

The ice on the first pitch was fantastic, with first time placements all the way up and I was soon at the belay looking up at the first of the three main steps. In another 60m pitch I managed to climb all three crux steps in one large pitch, the climbing was brilliant with interesting moves on great ice for placements, however the protection was a bit sparse. I was appalled at the belay I found at the top of the last ice step and had to make a belay which consisted of a bucket seat, a poor wire and a t axe. 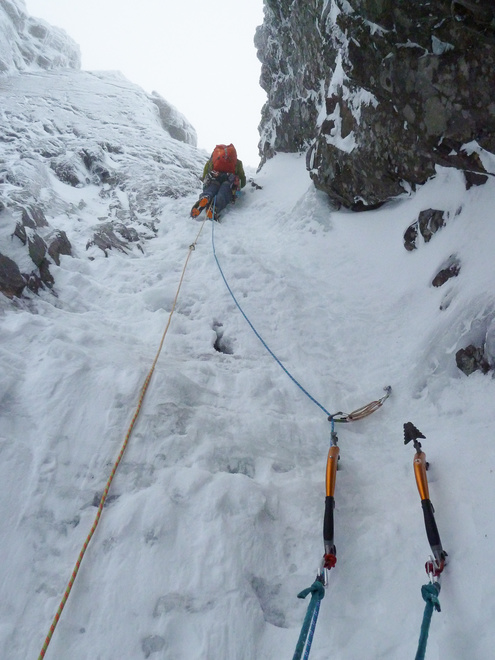 Me leading the main pitches 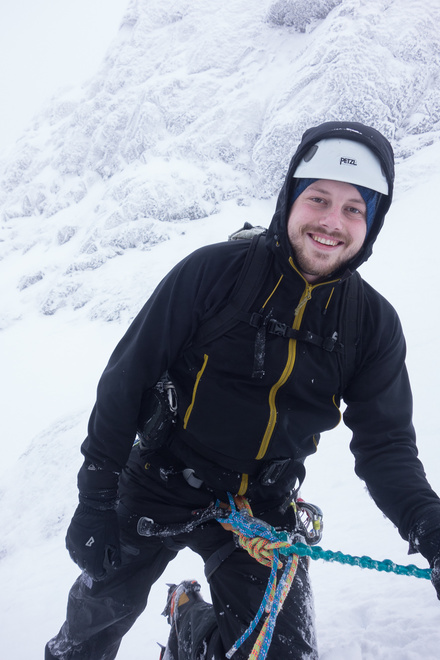 Happy to be at the top of the difficulties

There was just an easy pitch to the top and we were pleased to find that there was no cornice. It was a bit of a shame that the cloud had formed over Ben Nevis which meant that we didn’t get a view. After waiting for the party behind us to retrieve a dropped wire we quickly made our way to the descent. We decided to descend Number 3 gully rather than the traditional number 4 gully. There was no cornice which made getting over the top easier, but the headwall is rather steep when descending with one axe, however it is short lived and as soon as the gully eased the descent was very quick on the soft snow. 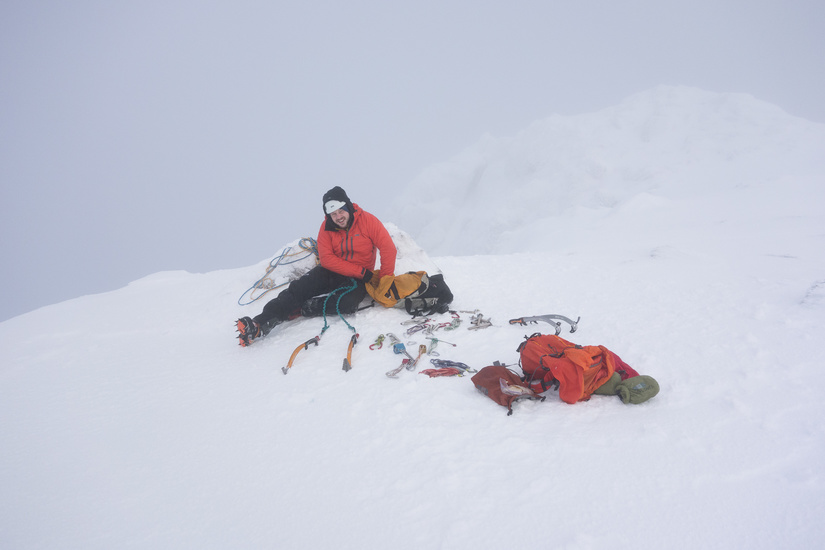 Sorting kit at the top 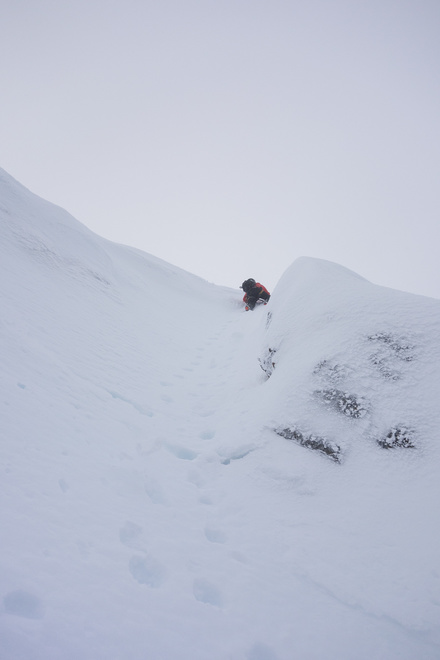 As we descended there were a number of climbers in Coire na Ciste, mainly on some harder mixed routes. A number of the ice routes were looking like they were forming really well and I am looking forward to getting back out and the rest of the season now. 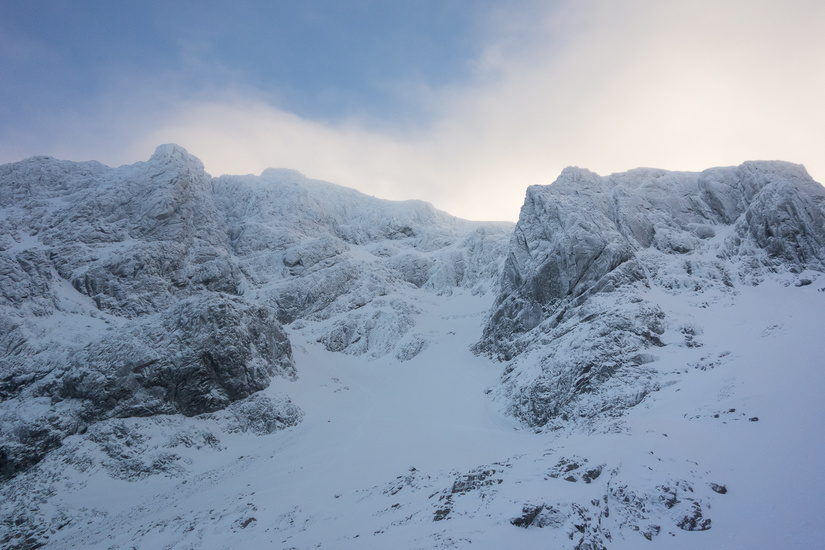 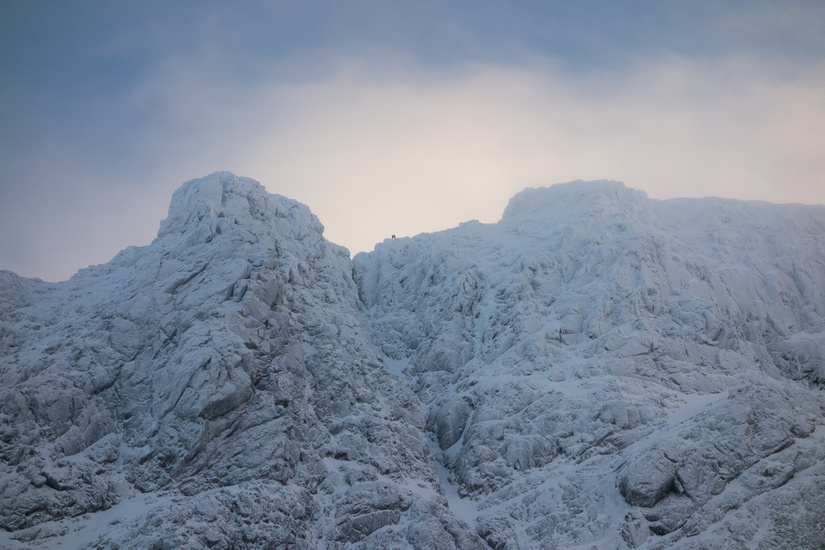 People near the top of Tower Ridge 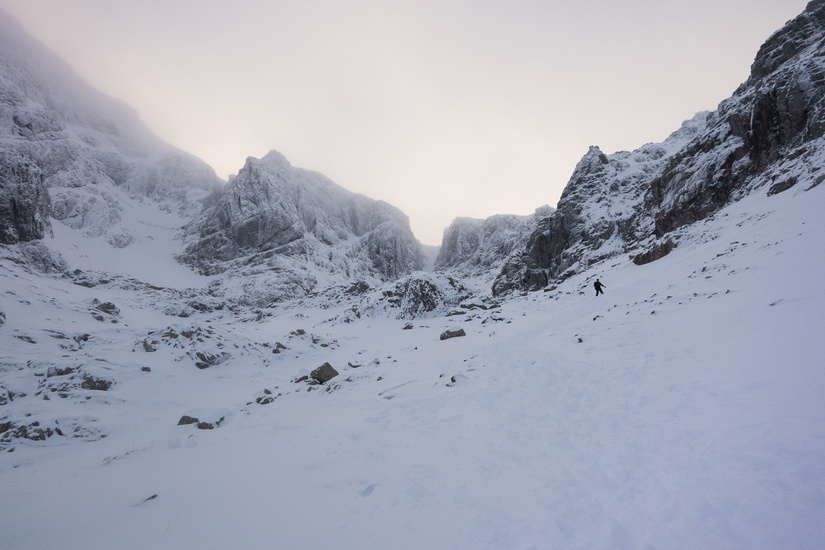 As we descended we enjoyed the lovely golden evening light as the sunset and the moonlit Ben Nevis which followed and made it back to the by the end of twilight to end a fantastic day in the hills. Which was much better than this time last year when I got lost and ended up on Jubilee Climb, due to the terrible conditions. 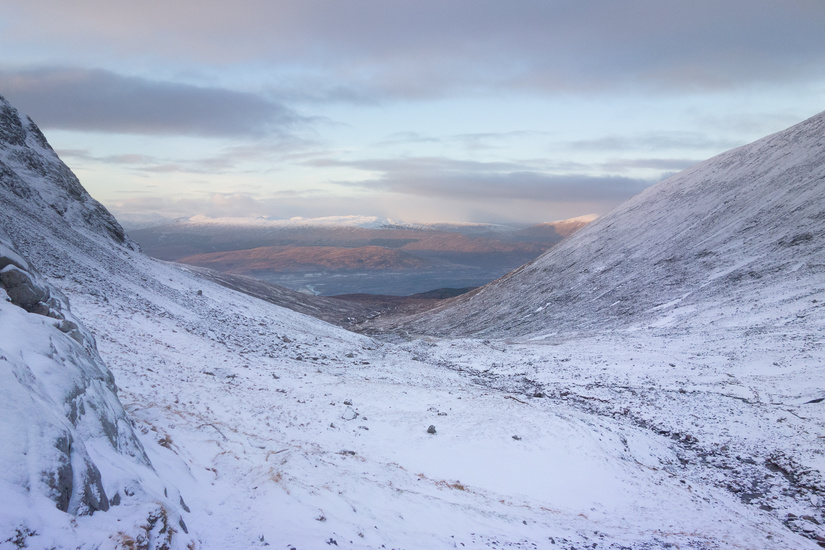 Stunning views on the descent 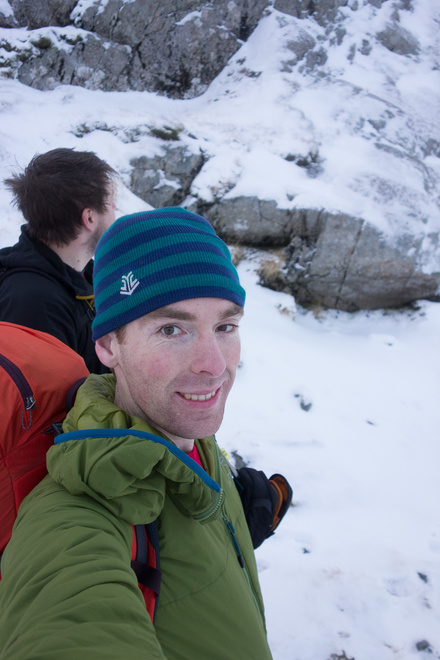 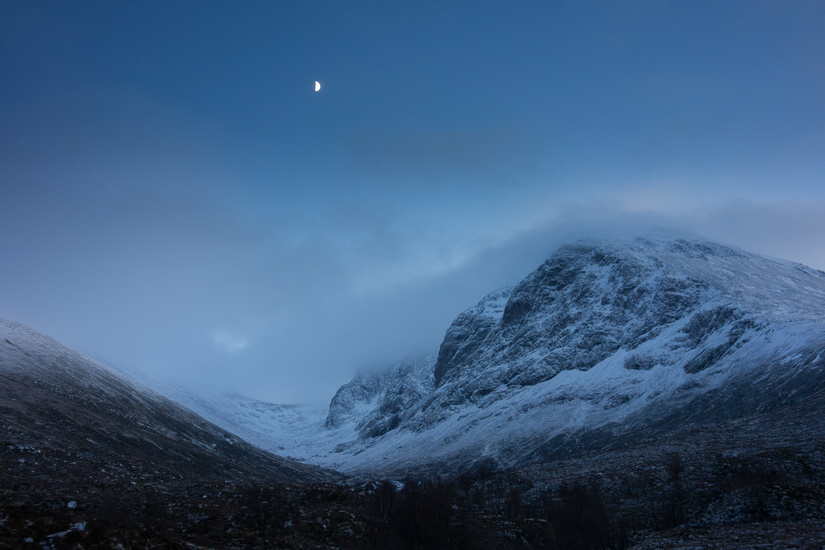