After a number of days of unsettled weather we finally had a period of settled weather which allowed us to get up into the mountains and attempt a route. Our objective was the classic AD Arête du Flèche Rousse on the Aiguille d’Argentière, although its condition was unknown as it hadn’t been climbed in a few weeks and since then there has been a lot of snowfall and the nights haven’t been that cold.

We set off from the cable car station to start the walk in from the hut in very Scottish weather which included hill fog and rain. After a relatively painless walk in we arrived at the hut with lots of wet kit and were very pleased to be greeted by a happy guardian and news of a proper drying room!

We set off early the next morning to a crystal clear sky, although unfortunately despite this it was not a cold night and the snow had not refrozen overnight. We made good time to the start of the route despite having to break trail, however after this the snow slowed us down significantly. The initial snow slope up to the first col on the ridge took us 1h40 due to knee deep snow with a hellish crust, however upon reaching the col we were greeted with stunning views towards Switzerland with great views of the Bernese Oberland and the Valais Alps above an inversion. 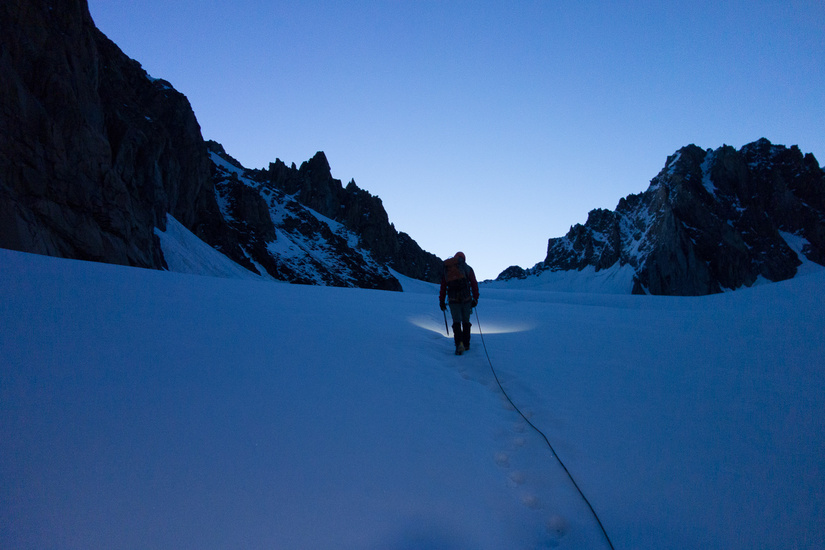 Approaching the route in the dark 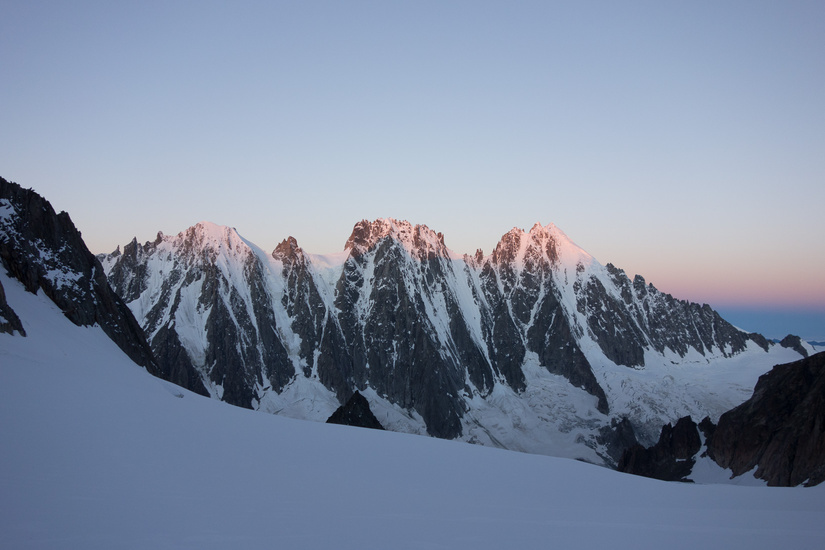 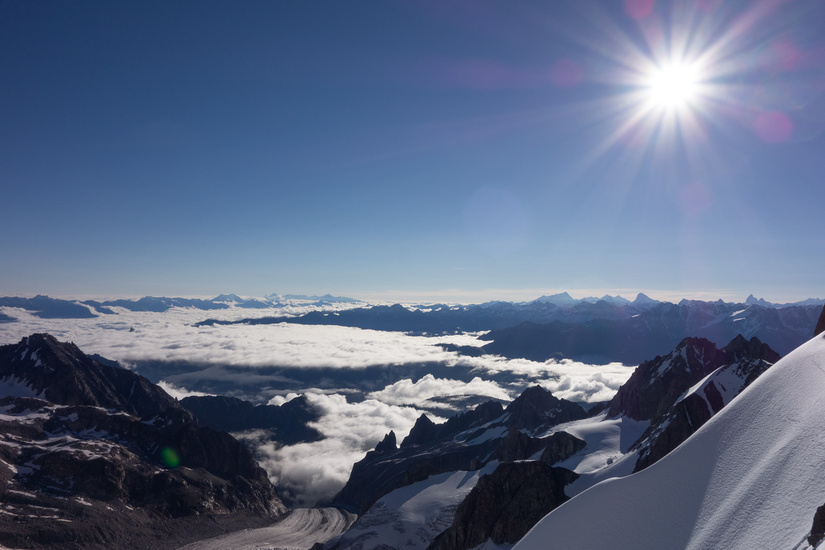 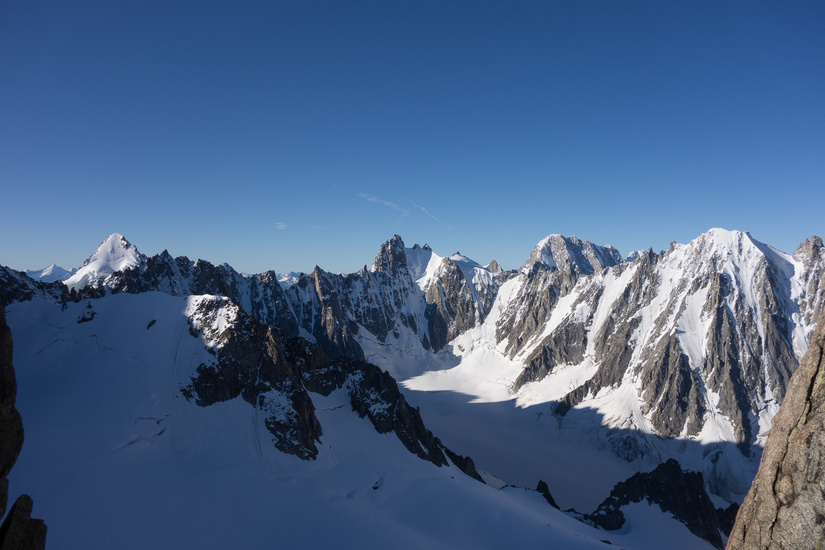 We started up the ridge and were making good progress until our first route finding issue on a route which is known for being hard to navigate. This lead to a very exposed and very insecure and exposed pitch across a snow slope and then a rocky section. Once we had recovered from this pitch we then had to down climb a coulior which was not helped by the quality of the snow and took us some time as a result. After this downclimb we were supposed to climb a chimney but this never materialised so we just made our way up a very loose rocky section and then more knee deep snow to get back to the crest of the ridge.

By this point we realised were were far behind book time and still had a long way to go, this meant that we were both having worrying thoughts about the descent and crossing of the wet glacier half way through the afternoon, but there wasn’t much which could be done about that at this point. 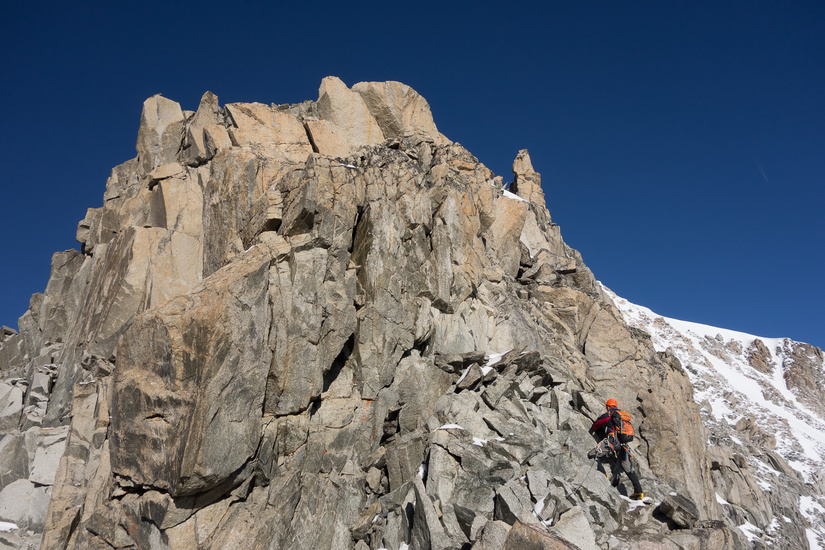 Rich at the start of the ridge

Panorama of the view 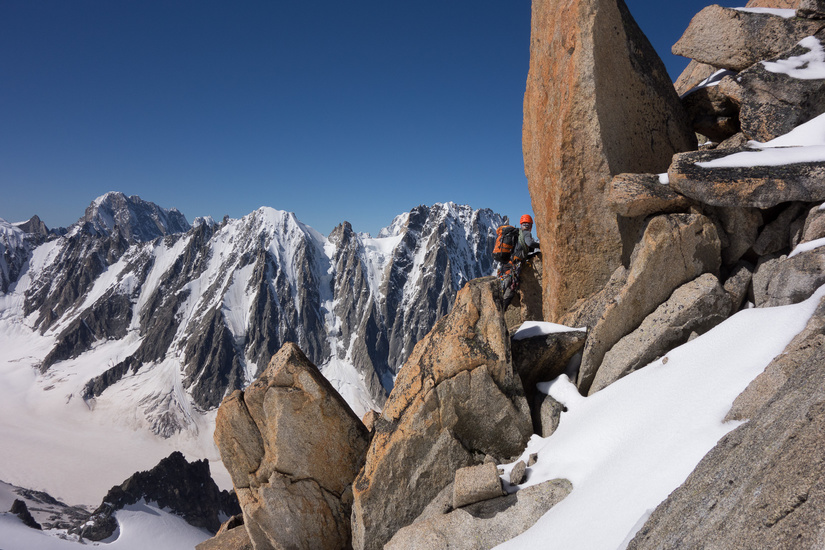 Rich in a stunning position

Not being sure of the way forwards due to a less than helpful description, we stayed on the French side as the topo suggested we should and followed what we thought was an obvious line. This lead to a dead end and judging by the amount of tat at the end of it, we were not the first people to make this error. After an abseil down to the snow, we had another endless ascent up knee deep snow to the crest of the ridge and the foot of the Flèche Rousse. 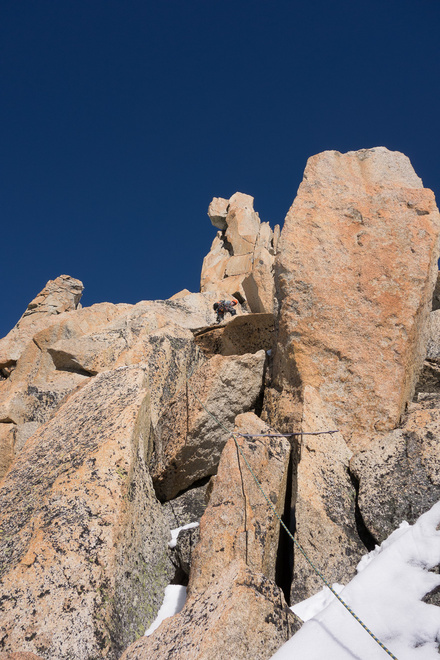 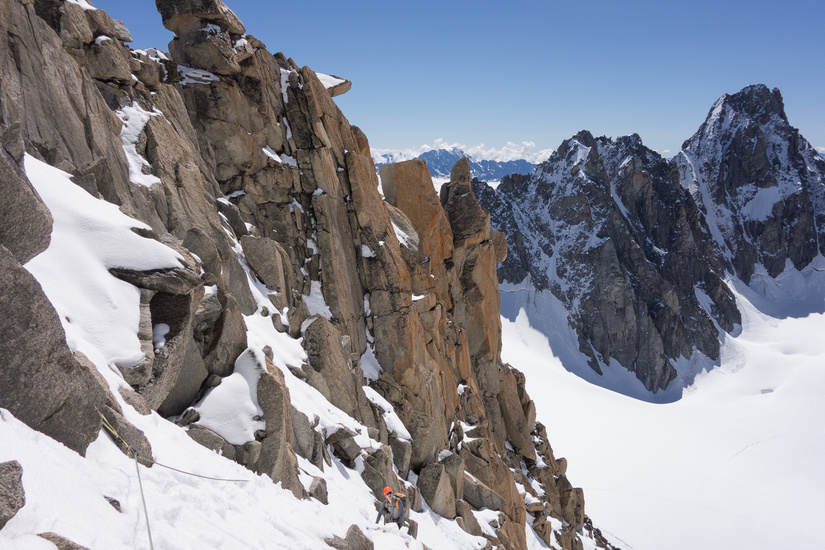 By this point we really had no idea what the guide book descriptions were trying to say about where we should go, so we made an educated guess and headed up what we thought looked like an obvious line. After some insecure moves on soft snow, we got to a hard section up some very loose terrain which Rich lead. In this section there was a human sized flake which was in a perfect place to pull up on which moved alarmingly, as we both found out when we pulled on it!

Once I got to the belay, I started the final 40m pitch to the top of the Flèche Rousse. This was a fantastic pitch which started with a fist jamming crack until it ran out with an exciting rock over before a committing move to a good spike. Another committing move above lead to an exciting hand traverse without any footholds, and finally a rest. Above the ledge there was the final thrutchy chimney which felt pretty strenuous with some more good first jams and entertaining rockovers. 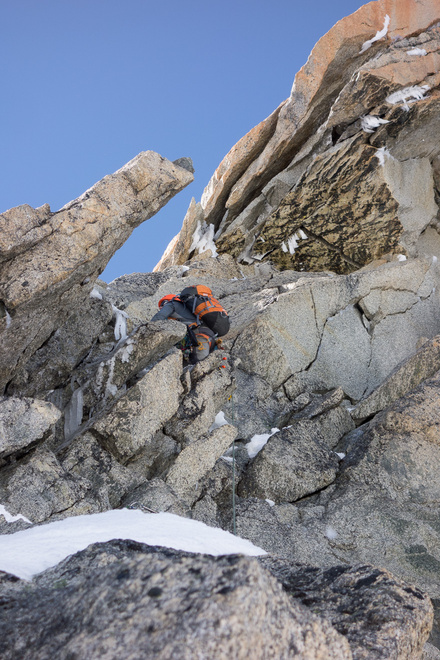 Not at all awkward… 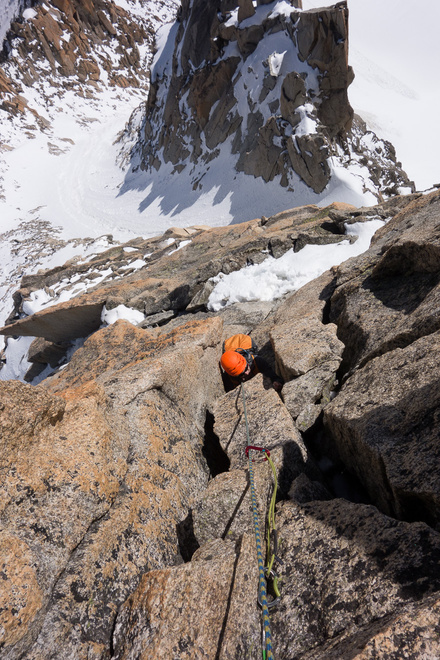 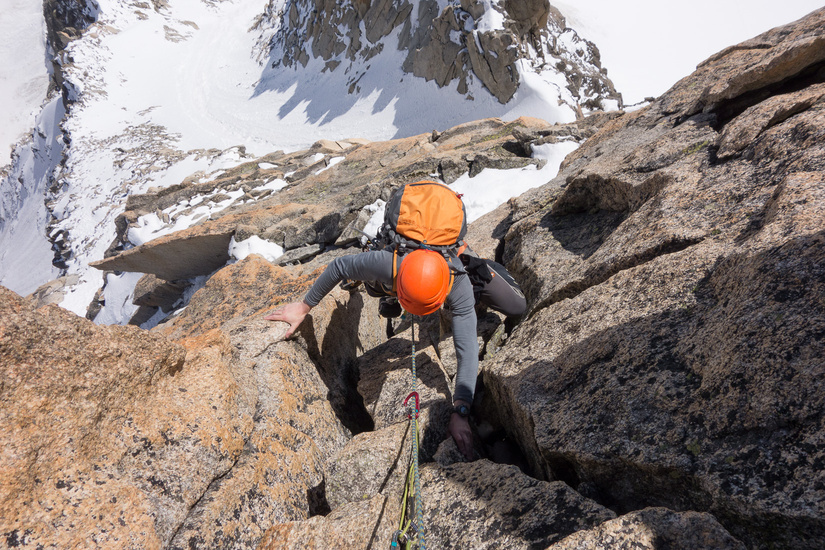 Due to being late and just wanting to get to the summit we were not able to enjoy our time on the summit of the Flèche Rousse, but quickly setup to abseil and made two abseils to get down to the col at the top of Y Coulior. From here another long section of postholing through yet more knee deep snow while trying to avoid the massive cornices we could see along the ridgeline. After what seemed like an age we arrived at the top absolutely knackered. 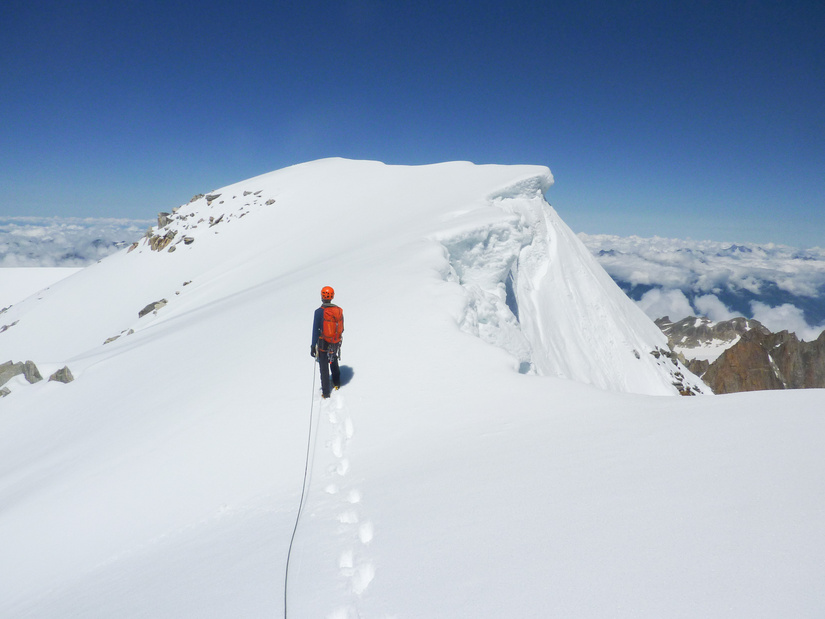 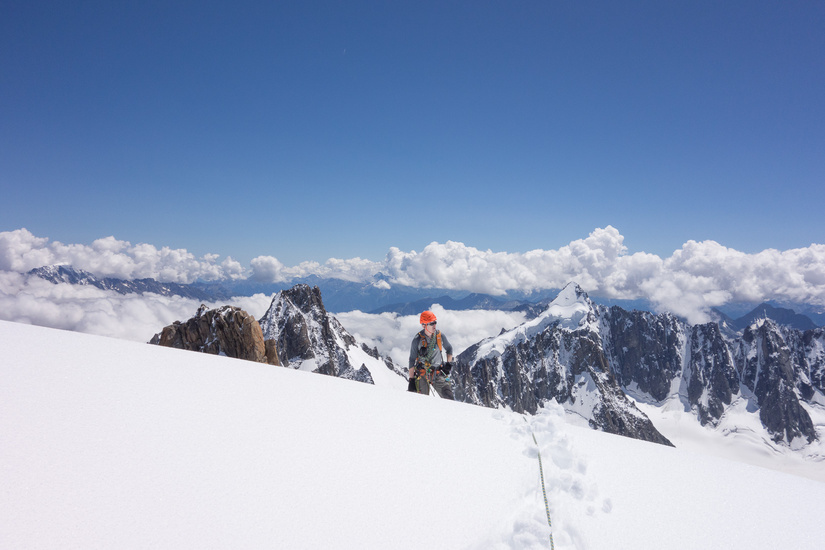 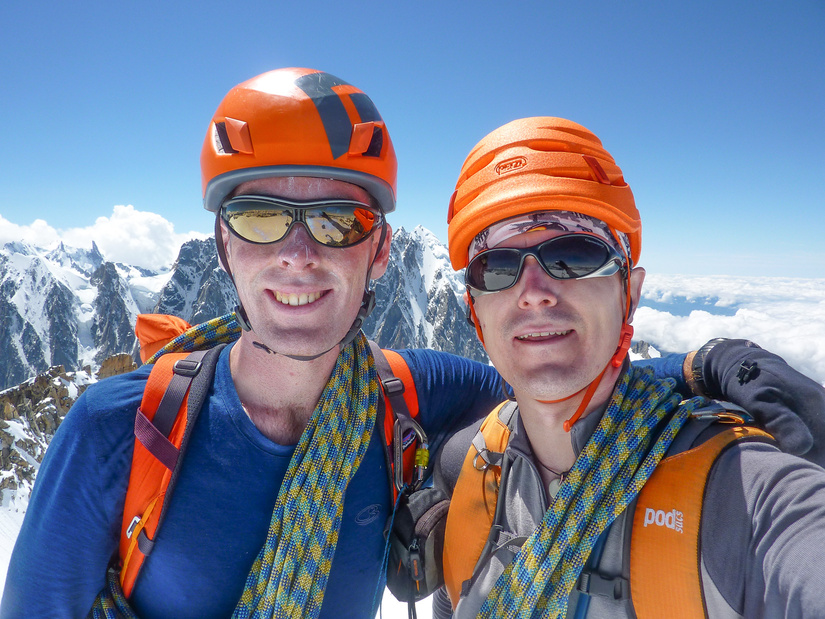 View towards France from the summit

After a quick bite to eat we started to descent the normal route, which included descending 400m of 50 degree snow. Thankfully the soft snow actually made it easier and we were able to make quick progress down to the bergschrund. We were both worried about crossing a wet glacier at 3pm, however we were both very surprised at how painless it was (despite yet more deep, soft snow). There were only a few obvious snow bridges and the glacier lost height quickly so we weren’t on it for too long before it began to dry out as we approached the snout. After what felt like an endless traversing path (but in reality was fairly short) we finally got back to the hut 12 hours after we left, absolutely knackered. As we were both very tired, and there was no way we were going to make the last lift down we stayed an extra night at the hut. 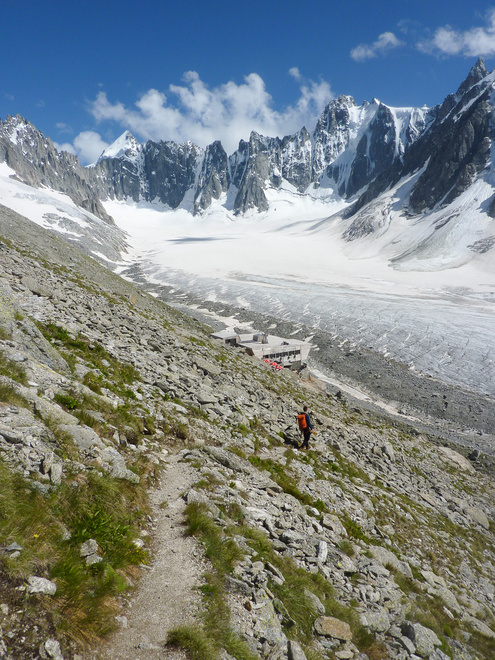 Nearly back at the hut

The next morning we had a lie in before we walked out down the dry Argentière Glacier, and due to a route finding error we ended up navigating our way through a number of man eating crevasses with a number of irreversible jumps, exposed positions between crevasses and a lot of zig zagging. Eventually we got to the end of the glacier and were soon back at the lift station. 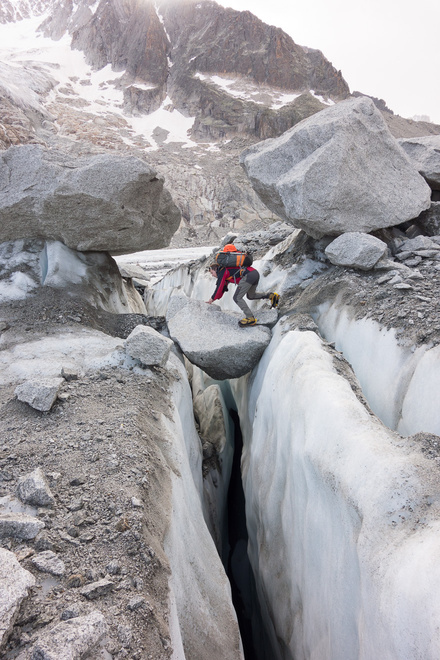 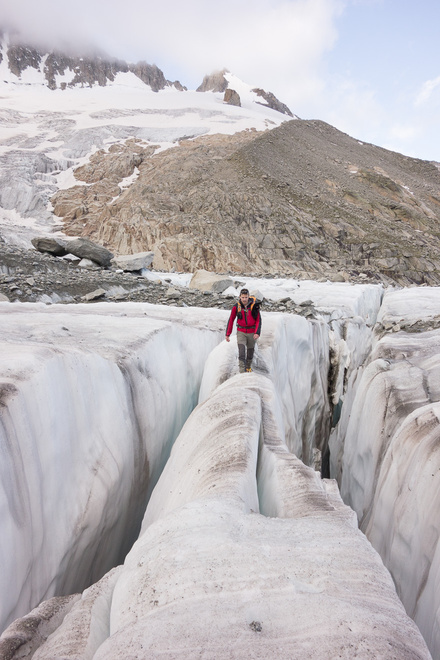 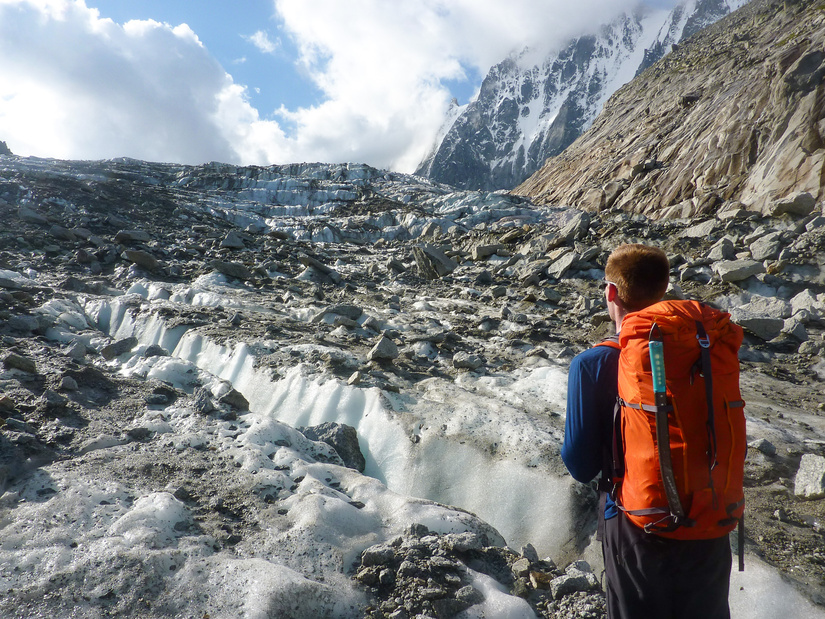 We came down that!!

It was an absolutely fantastic route and it was very bizarre being out on a route in the alps with no trail and no one else around, but at the moment our lasting memory is the endless deep snow which made us take ages on the ridge and is also the reason that we are so tired. The rock sections were great fun, with lots of good climbing in fantastic positions, although we both thought that the route was very tough for AD due to the hard route finding and lots of technical climbing (although some of this might not have been on the correct route!). By the end of the route my upper body was aching and starting to fatigue, which isn’t something I have experienced on any other AD routes I have climbed.