Pembroke – My home from home…

After managing a single weekend in Bristol last weekend, a good forecast put an end to my idea of having a cheap month and I headed back to what is becoming a very regular climbing venue for me, Pembroke.

We left Bristol on Saturday morning and headed straight to the classic venue of Mother Carey’s Kitchen. I first visited this crag in April and it felt a world apart today as we walked to the crag in shorts and tshirts baking in the late morning sunshine. After an obligatory amount of kit faff we were soon ready to abseil into the crag in order for me to climb the super classic Brazen Buttress, which is known for being unrelentingly sustained. 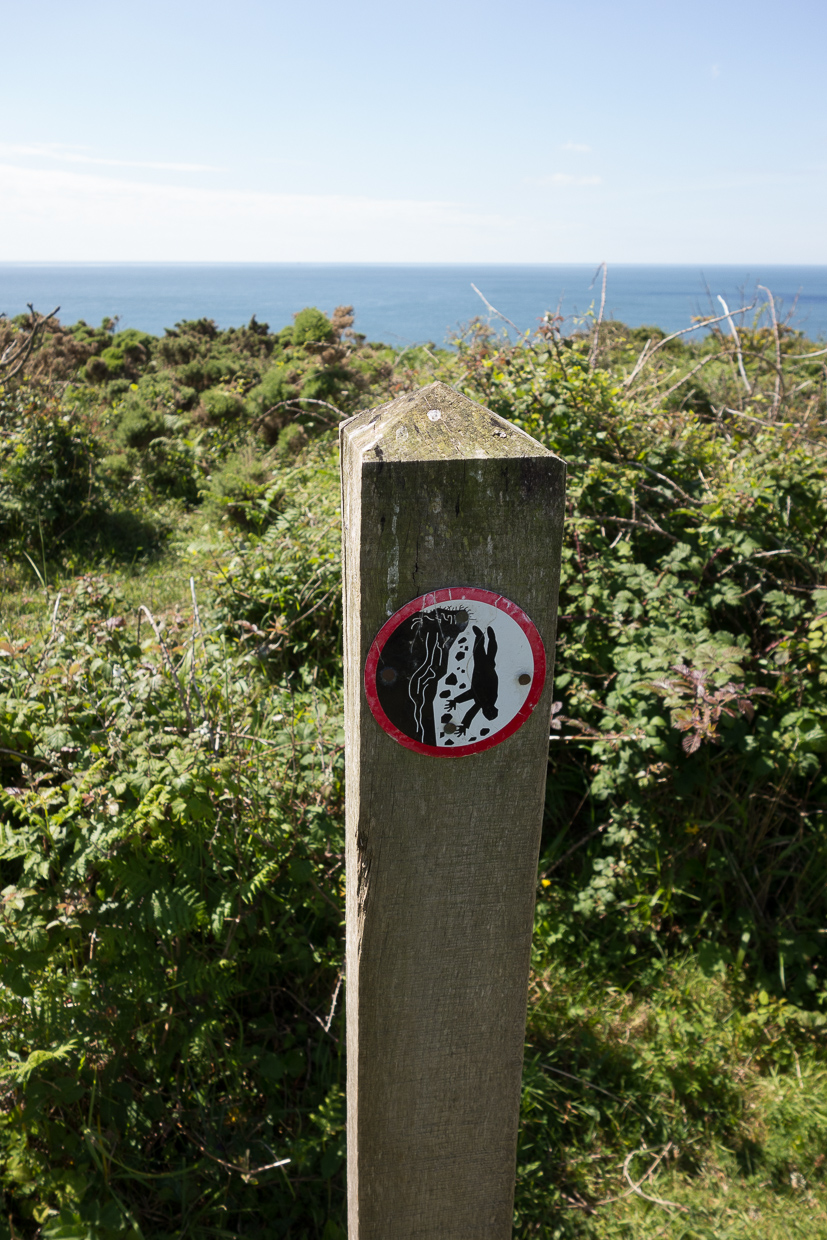 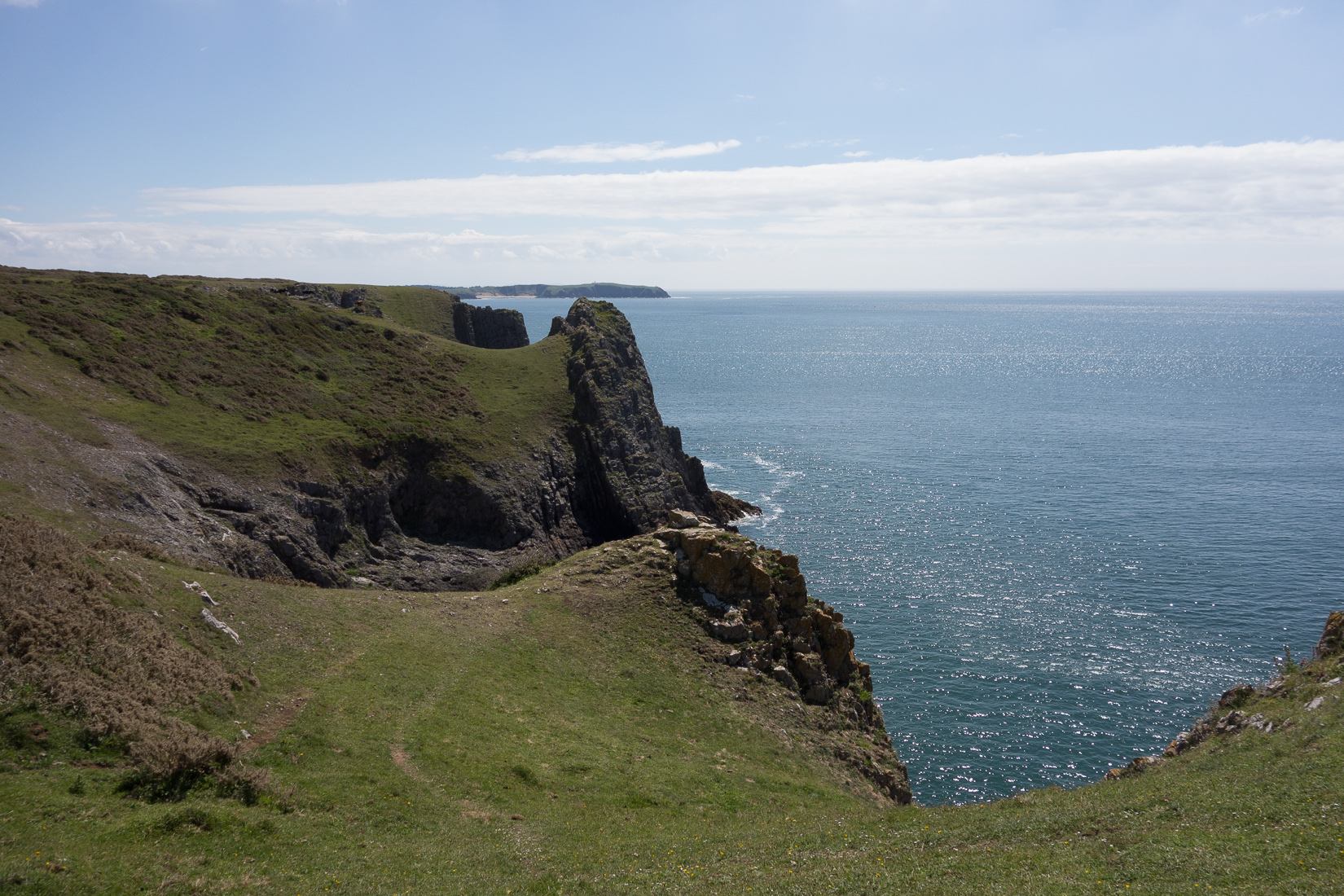 Not a bad day…

I decided to climb the route in one pitch and easily dispatched the first pitch which only had one hard move, this left me standing on the optional belay ledge looking up, all of a sudden it all seemed a bit daunting. After a few minutes recovering I set off, and was immediately in the thick of it constantly climbing excellent sequences without any proper rests. I was making great progress and made it into the final crack up the headwall, however the pump was building and I knew I was in trouble when I couldn’t rest off a jug, however I set off up the next sequence where I found a thankfully great bit of gear. Despite the feeling of terminal pump and a quickly decreasing ability to grip I carried on as I REALLY wanted the route, however the inevitable happened and a few moves before the route eased up a bit I ran out of stamina and fell off, taking my first proper trad fall of the season.

Immediately after the fall I was annoyed with myself for not having completed the route, but I quickly realised that I hadn’t given into my usual desires and stopped in a strenuous position above good gear to place more, or got scared and shouted take, but I had climbed until I wasn’t able to hold on anymore, and I can’t as more of myself than that! The problem with having tried so hard on my first go, was that my arms were completely pumped, and even after resting I wasn’t able to grip onto the holds to make any progress. Eventually I fully committed to the sequence, which felt very insecure due to my inability to hold on and I was very happy to reach the top, where I crawled to the belay and our bags for a well earned drink and snack. 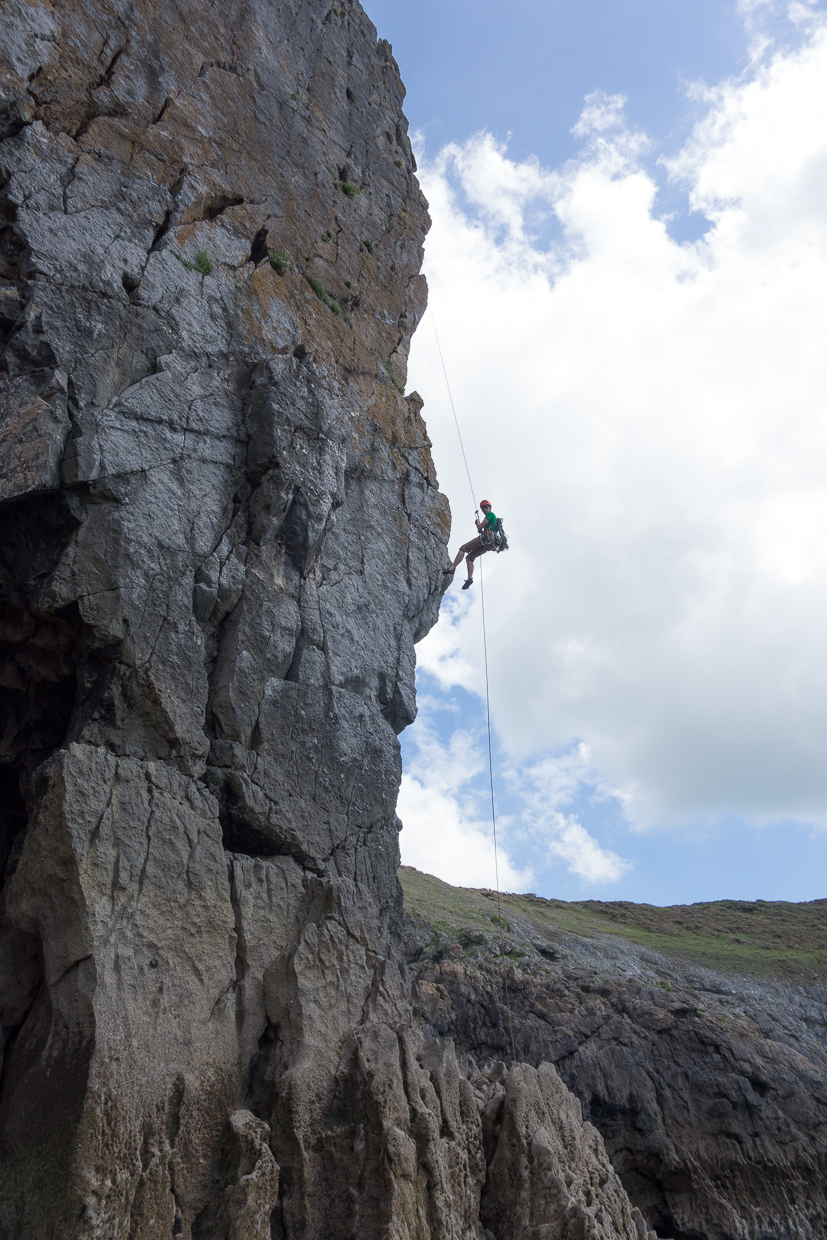 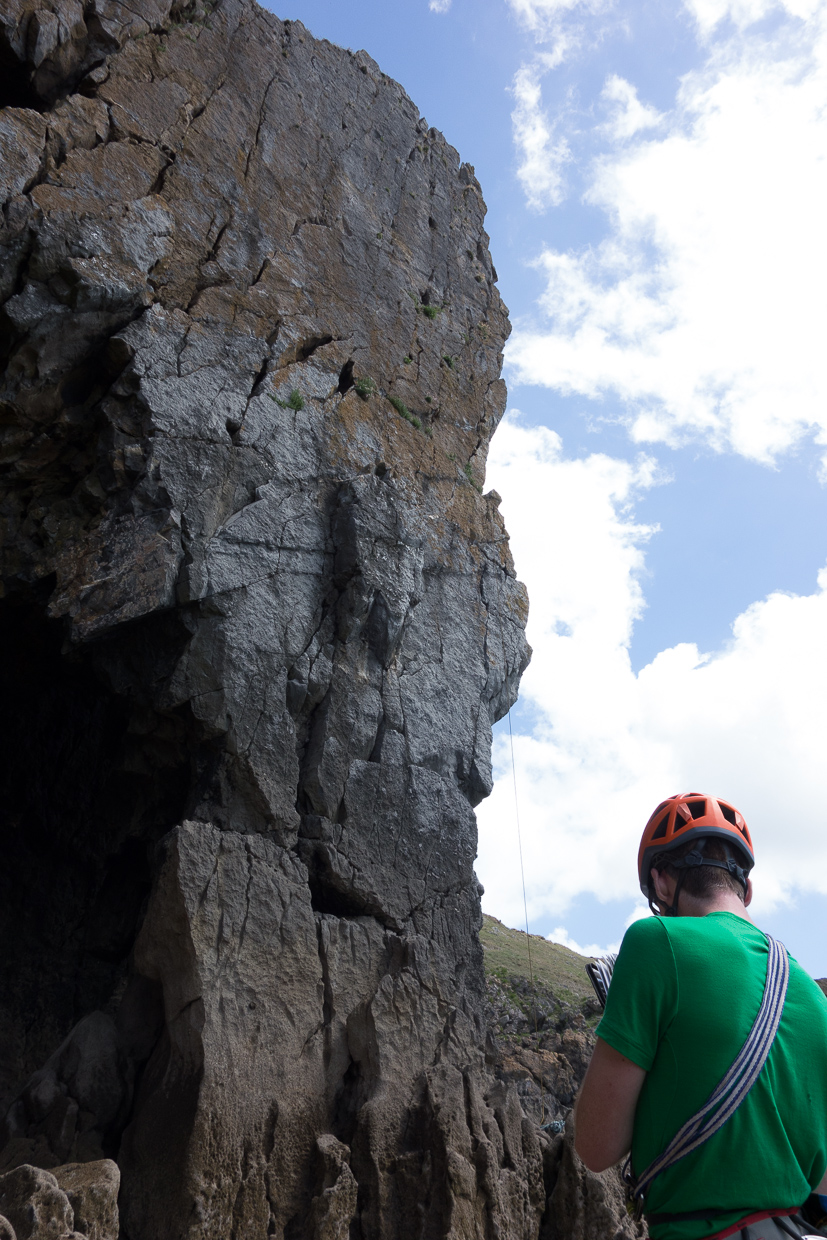 Me looking at Brazen Buttress 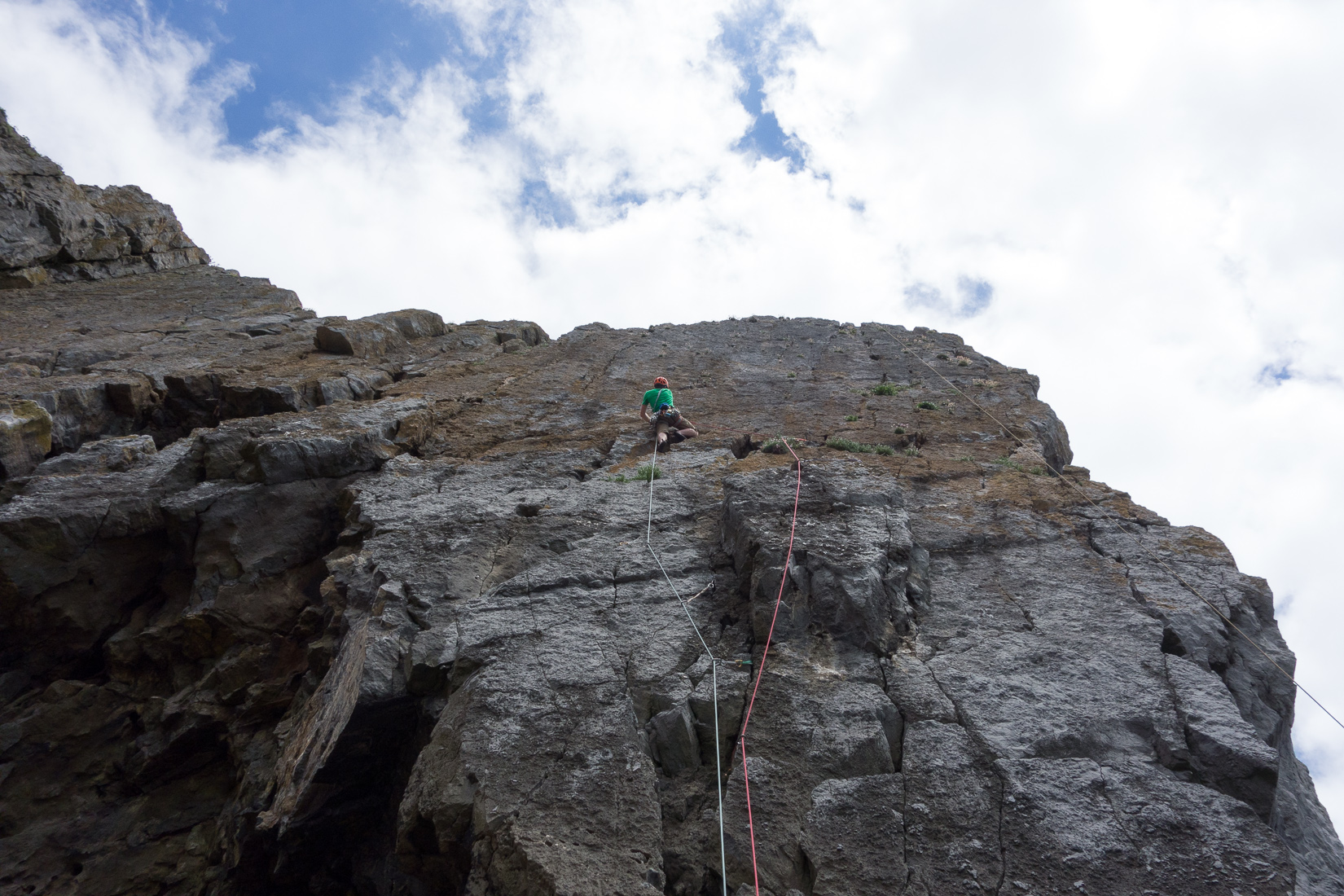 After Rich had climbed Brazen Buttress, we headed over to Trevallen Cliff in the more common area around Range East. Before the start of the route we were both feeling a bit spent due to a combination of Brazen Buttress and the intense heat being provided by the June sun, and a northerly breeze which meant that the crags were sheltered. After some deliberation we decided to climb another three star pembroke classic, The Hole, with the direct start making it E1 5c.

The first few moves were the technical crux which always makes them feel harder as the ground is close, however the moves were also certainly high enough that you really didn’t want to hit the ground. Rich quickly committed to the sequence, and I thought he had made the initial ramp however he rushed the move and missed the jug. He just about had time to warn me that he was coming off try and take in/drop down into a trench full of water. Thankfully the gear held and Rich stopped just above the ground, and the rope went tight before I landed in the water. On his second go he was soon a the ramp, and after an awkward traverse was at the easier corner which lead up to the unique feature of the climb which was a bizarre tube in the rock. When we got to the top I discovered that the fall Rich took was only his second ever proper lead fall on trad, it must have been an exciting fall for a second ever fall, as it had a fall factor of almost 1! 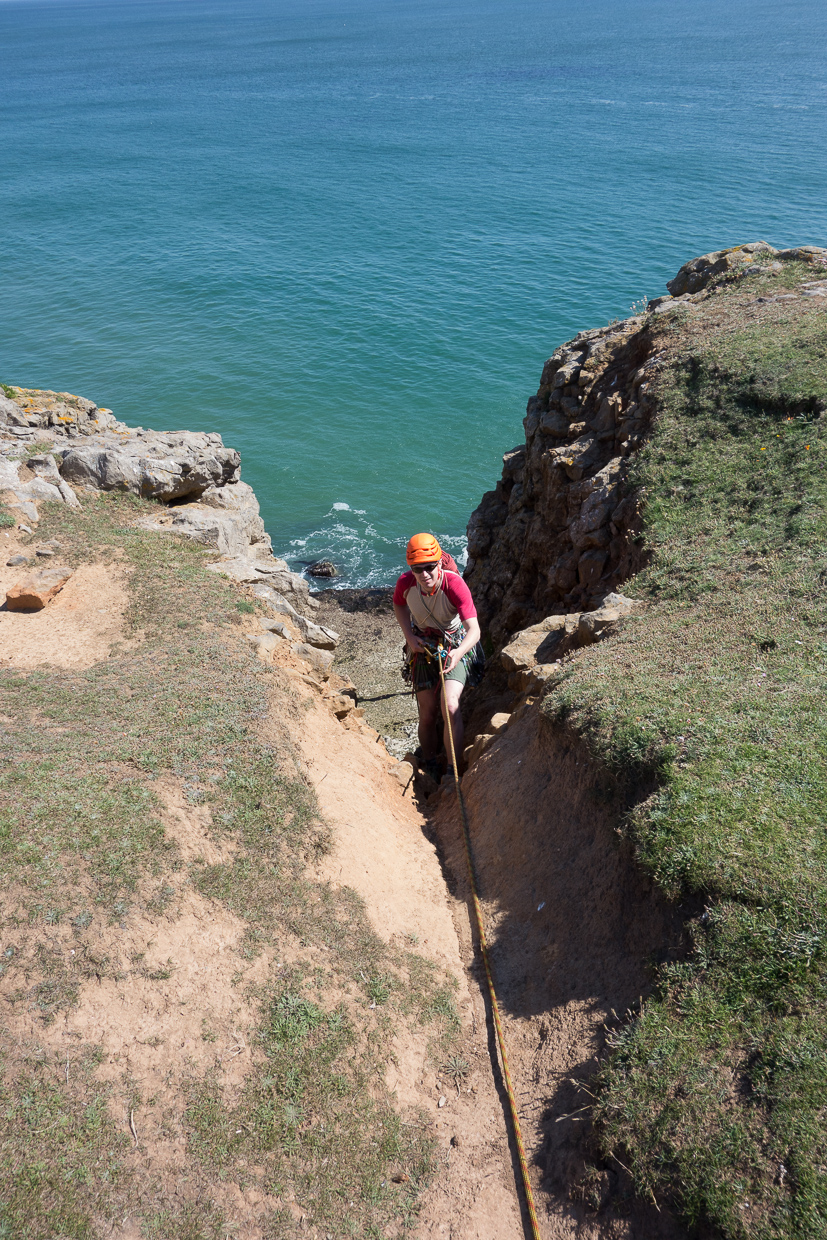 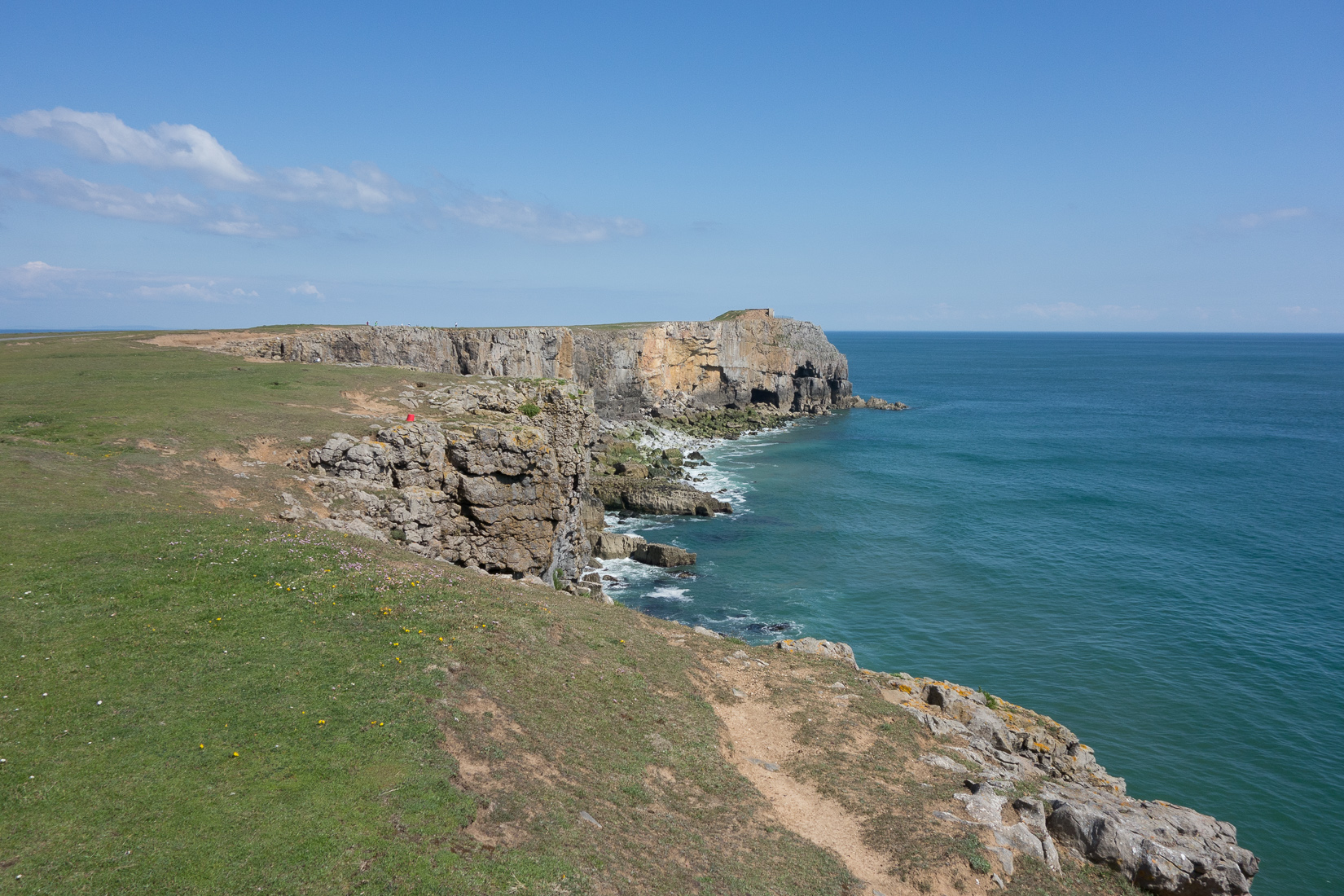 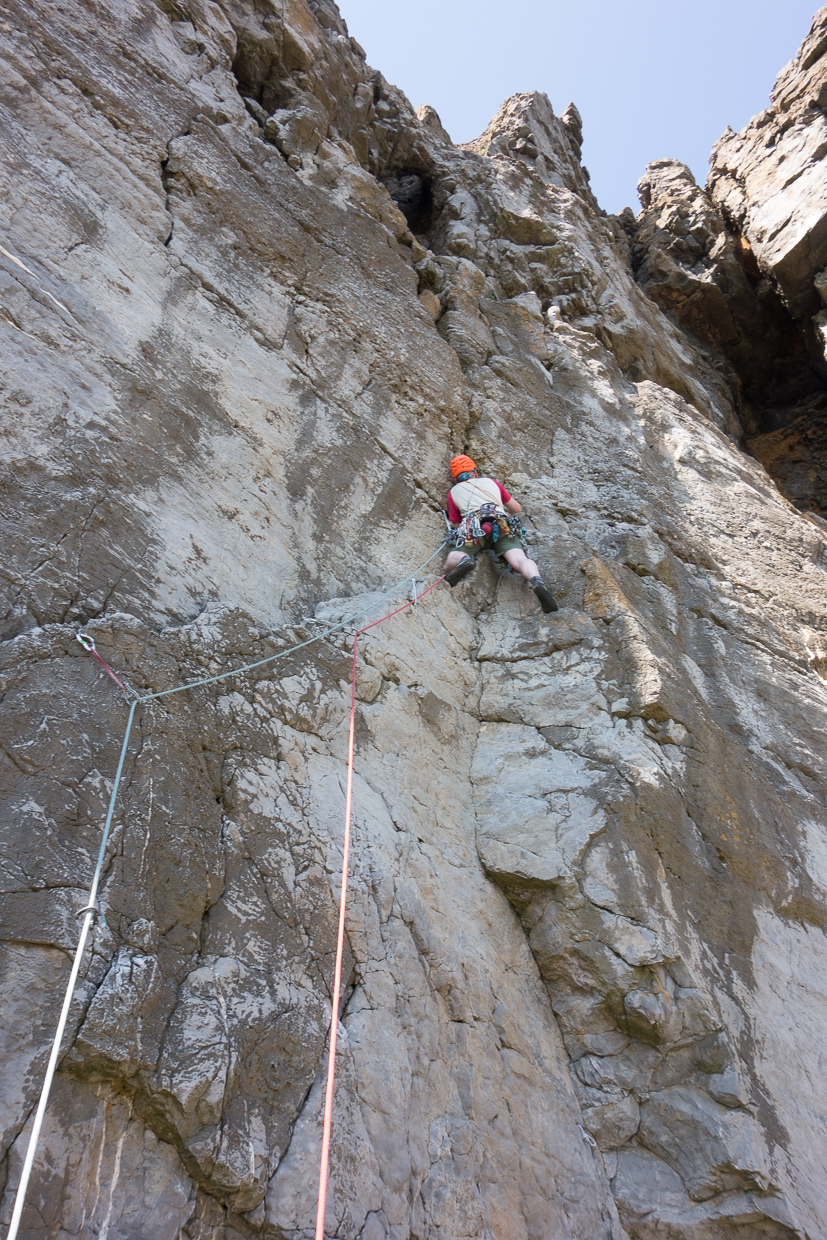 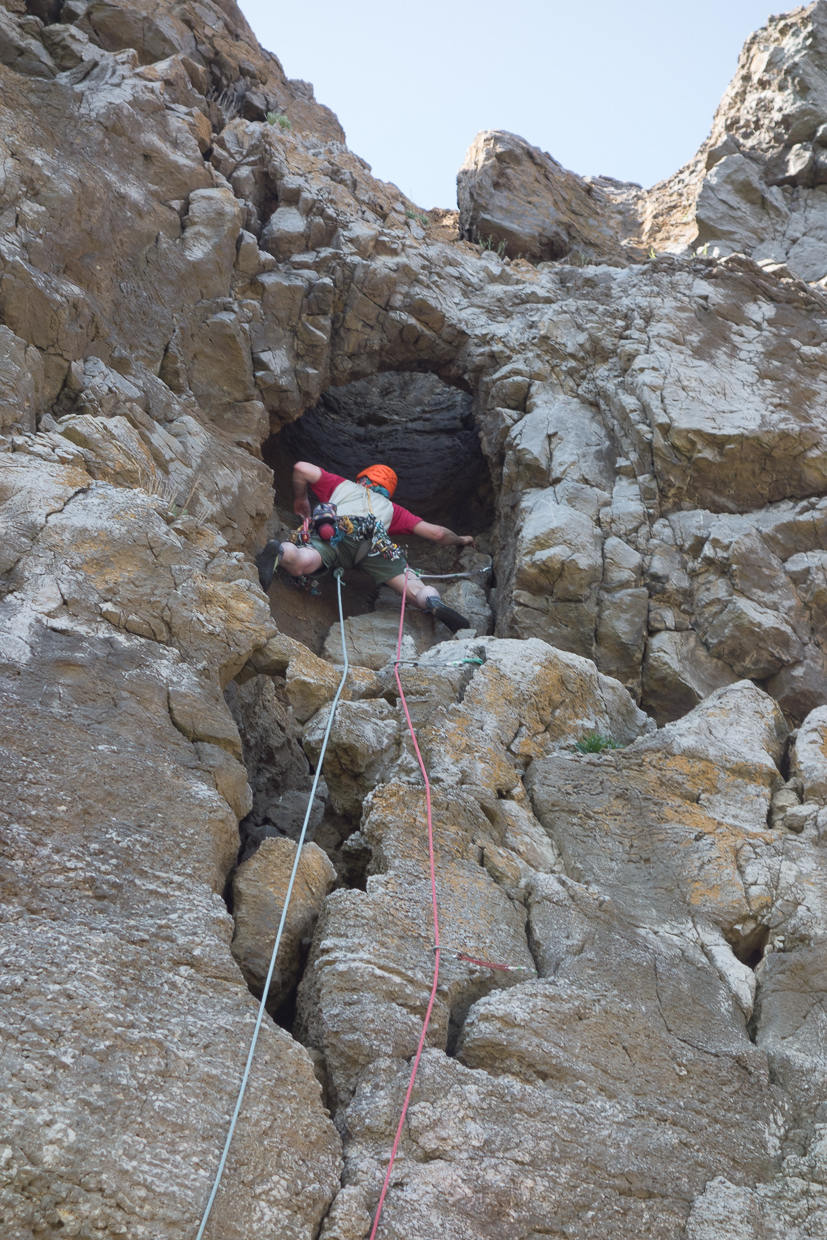 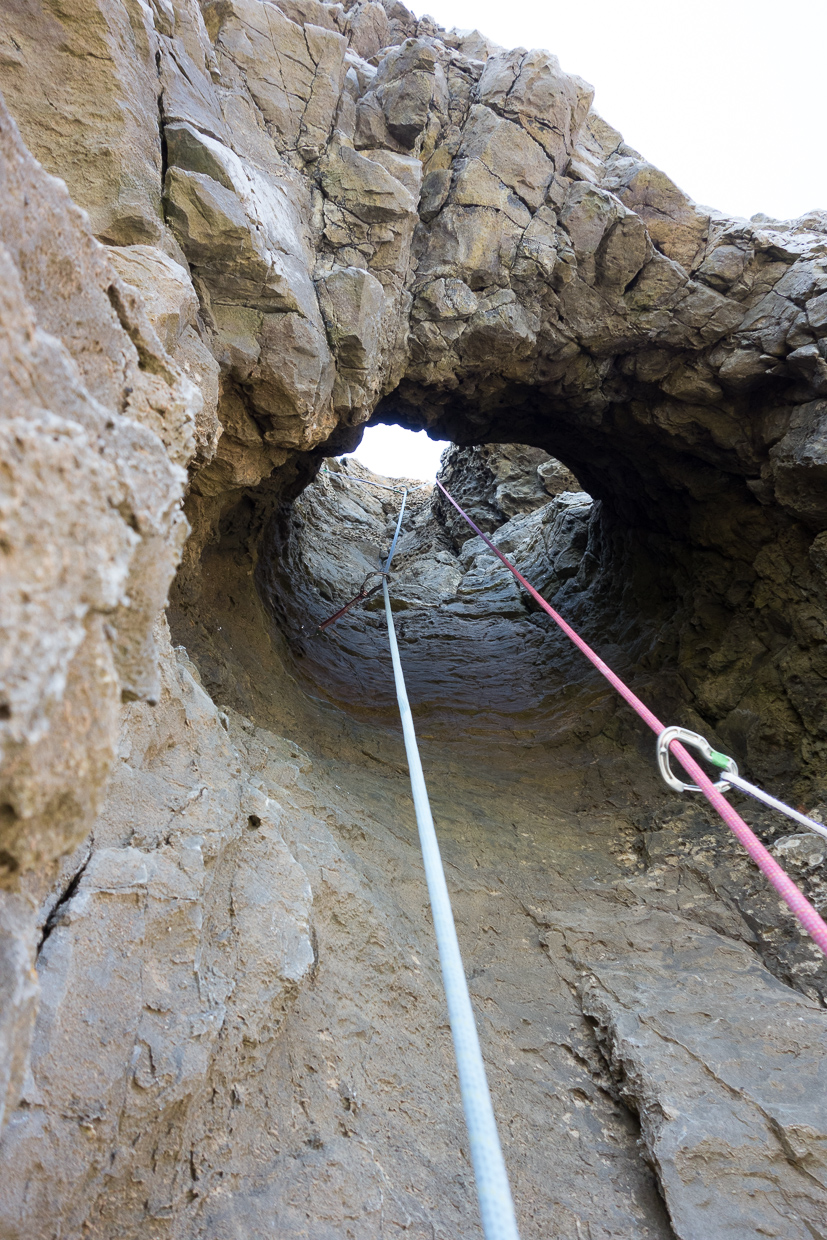 What a crazy feature 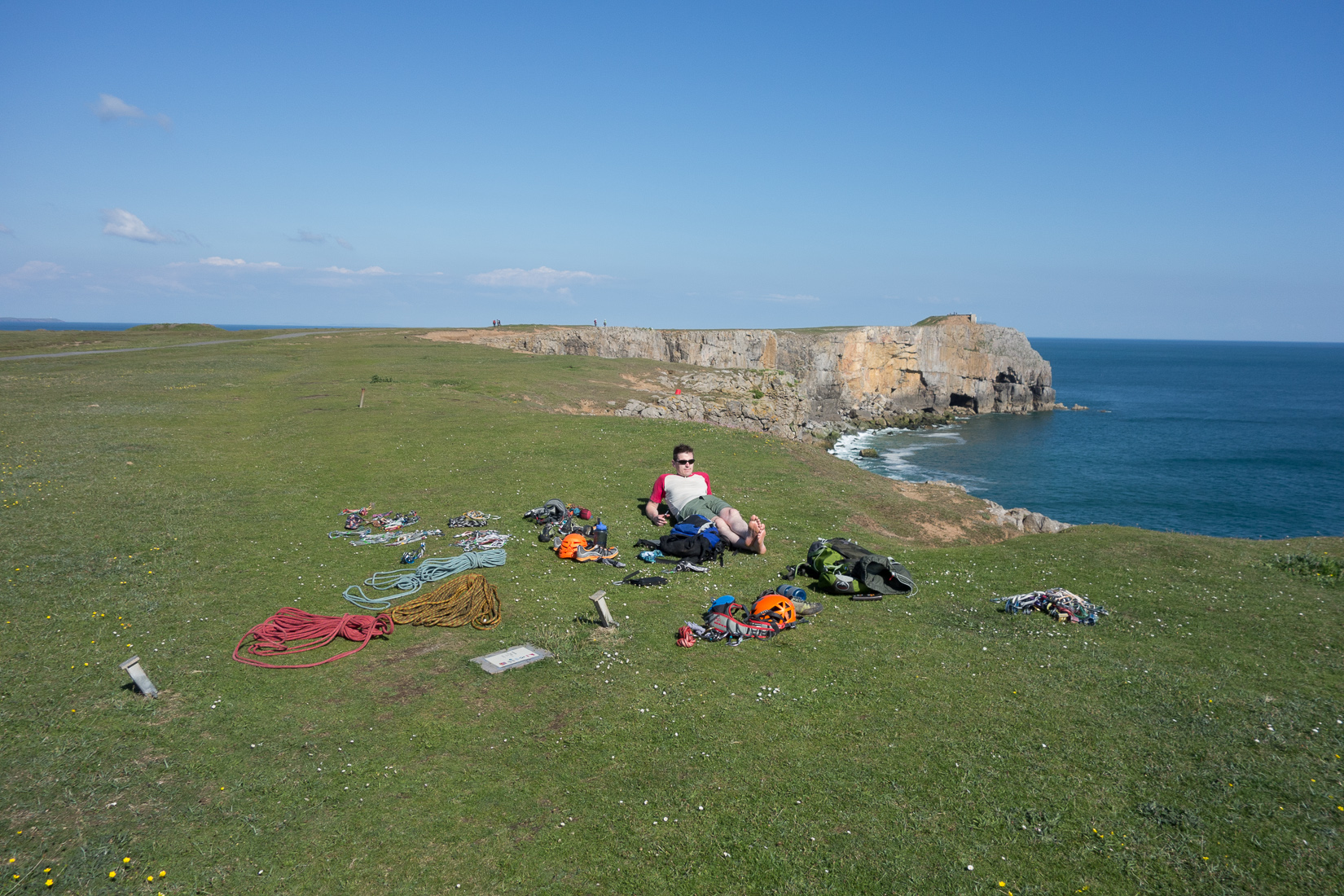 When we got to the top, we decided we were both spent and just wanted to go and relax at the campsite. So after an extended period packing up the gear we made our way to the campsite in Bosherton. I have spent a number of nights under canvas this year, however this was the first evening where it has been warm enough to sit out and relax in the evening sun. Its evenings like this one that remind you how much fun camping is when it is warm and you can just relax in the sun all evening. 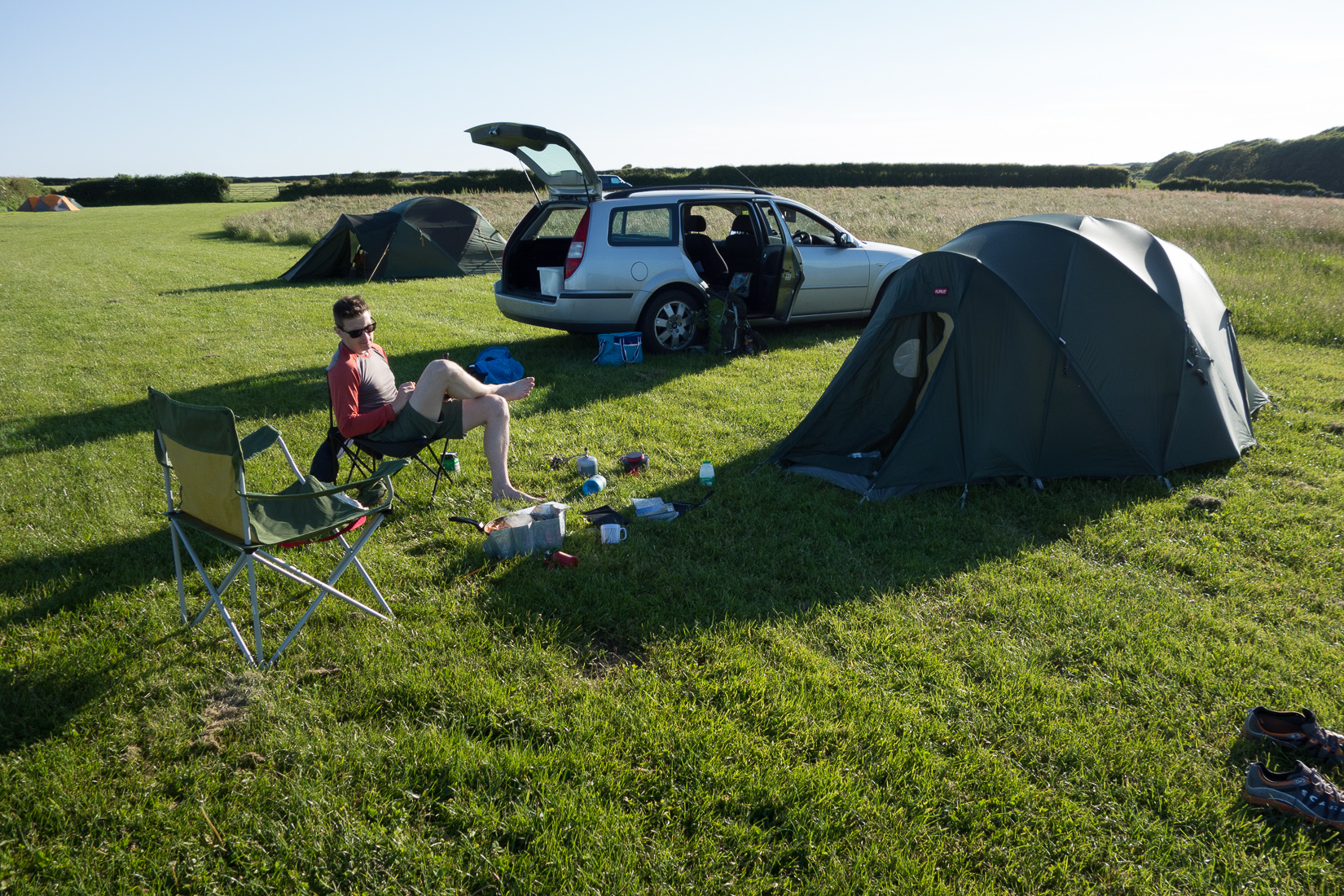 Relaxing at the campsite 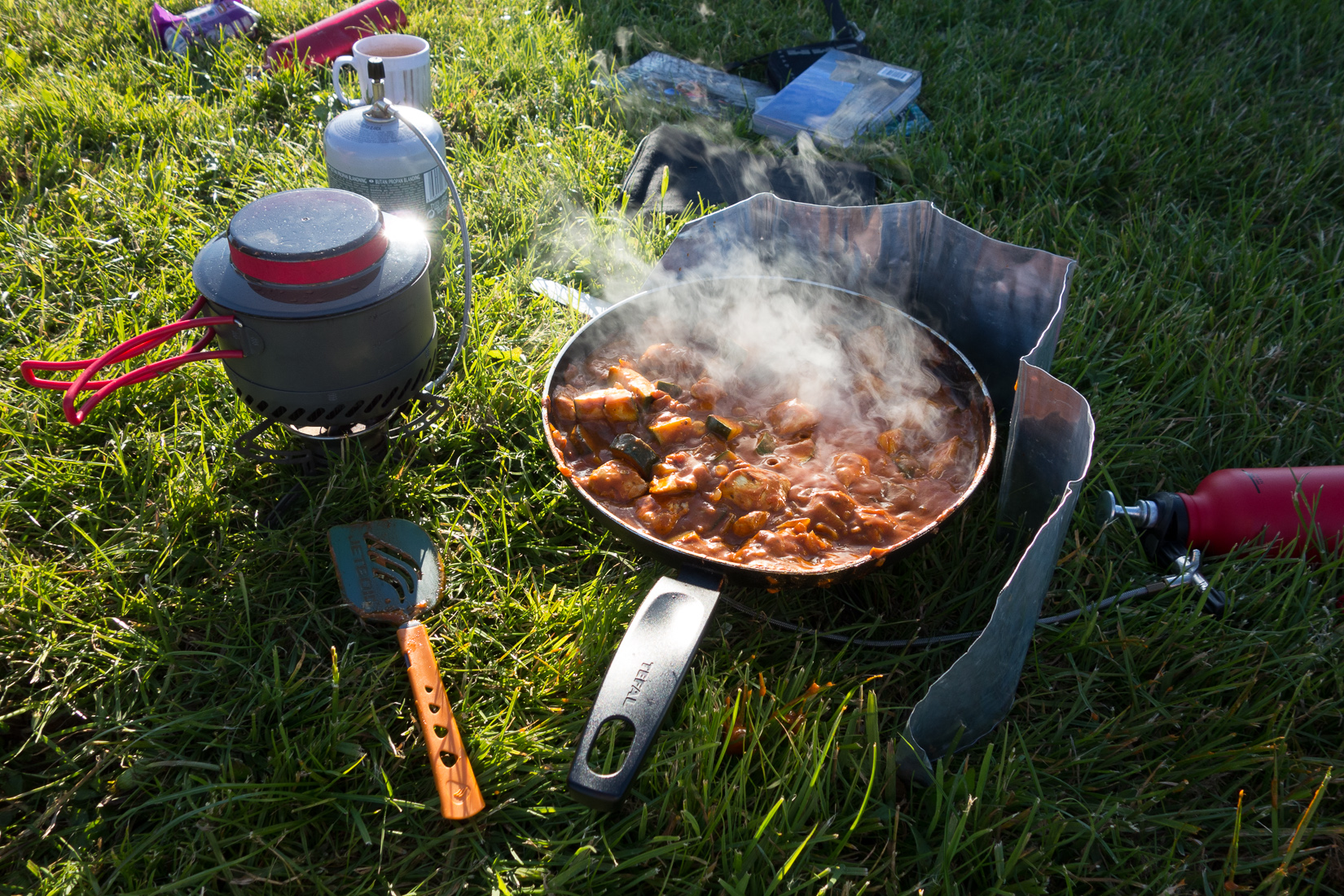 The second day was a bit bizarre, as it was drizzling and cloudy when we woke up which was unexpected as the forecast the evening before just said sun. Due to this we had a very leisurely morning and by the time we had packed up and were at St Govans the sun was beginning to come out.

We abseiled into the crag in order for Rich to climb Tactician, an E1 with a spicy move through the obvious overhang. Rich was making quick progress up to the overhang, however when he got there he found the rock was really greasy due to the crag being in the shade, combined with the high humidity. Unfortunately, despite trying pretty hard he had to rest which he seemed frustrated with, a feeling I know all too well from my time trying to make the move into E1s. While following him up the route I almost psyched myself out for the route I was going for, as I didn’t find the crux straight forward with the grease and ended up doing a painful jam and using brute strength rather than technique and finesse.

Thankfully some other climbers at the top of the abseil gave me some encouragement to go and give it a go, so we tentatively abseiled in and before I knew what was going on I had started the route and all the mixed feelings had left my mind. Initially the route was reasonably dry and good rock and I was soon at the first crux, an exciting move right to gain a ramp leading to a corner and the large overhang. This all went smoothly and I arrived at the corner, to discover that I had not escaped the grease. Unfortunately the greasy rock can’t be fixed with chalk as it just makes a paste in your fingers which doesn’t help at all. After some tentative moves up to the overhang, I committed to the sequence out right and ended up what felt like a long way above gear where I was able to fiddle in some more small wires which were OK at best. This lead to a VERY exciting move out left above the overhang and up to some very greasy holds, after fiddling in some good gear I was able to relax a bit and even managed a very insecure hands free rest. The final crack looked very intimidating but I knew I had to go sooner or later, at the top of the crack I got to the last good hold before everything got a bit dirty and I couldn’t work out the sequence, with increasing pump I decided to just go for it and dynoed for a good looking hold and the top of the route. I was very happy to get to the top and tick another classic solid-at-the-grade E2. 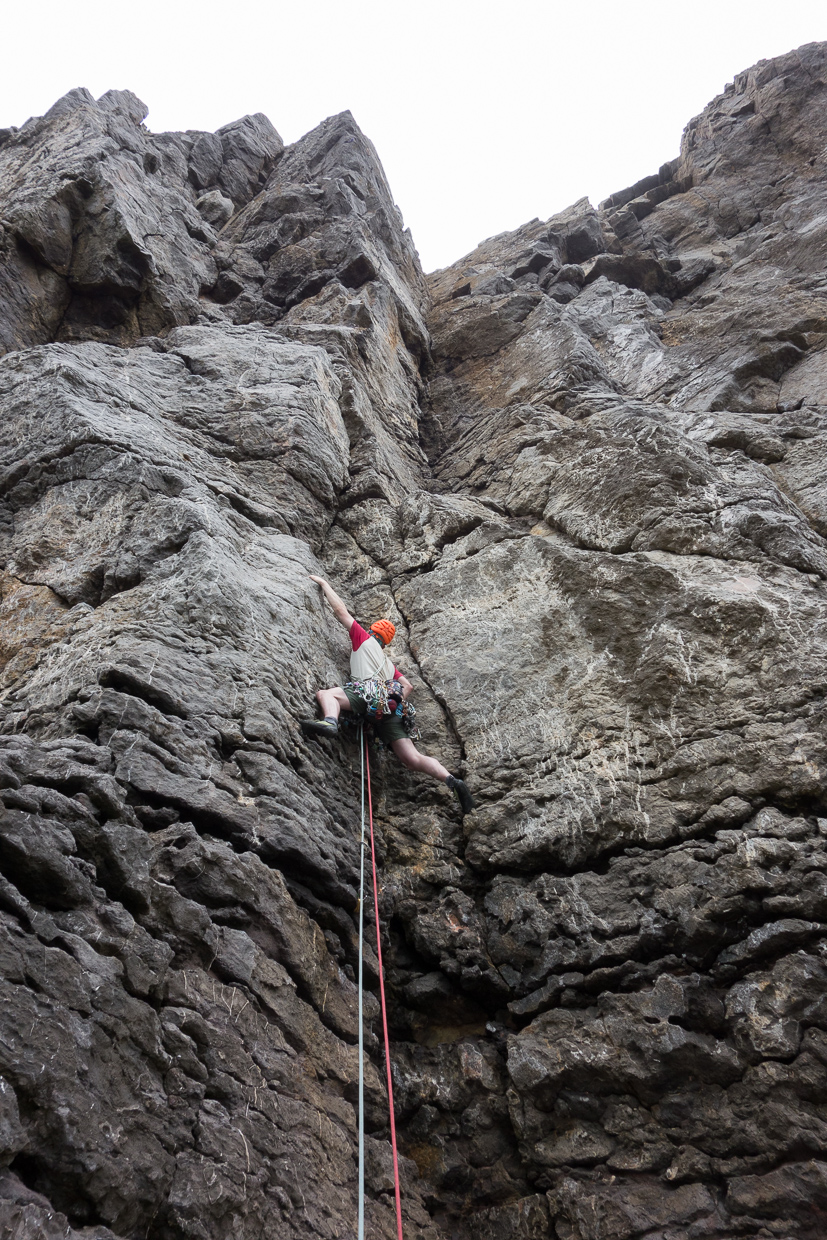 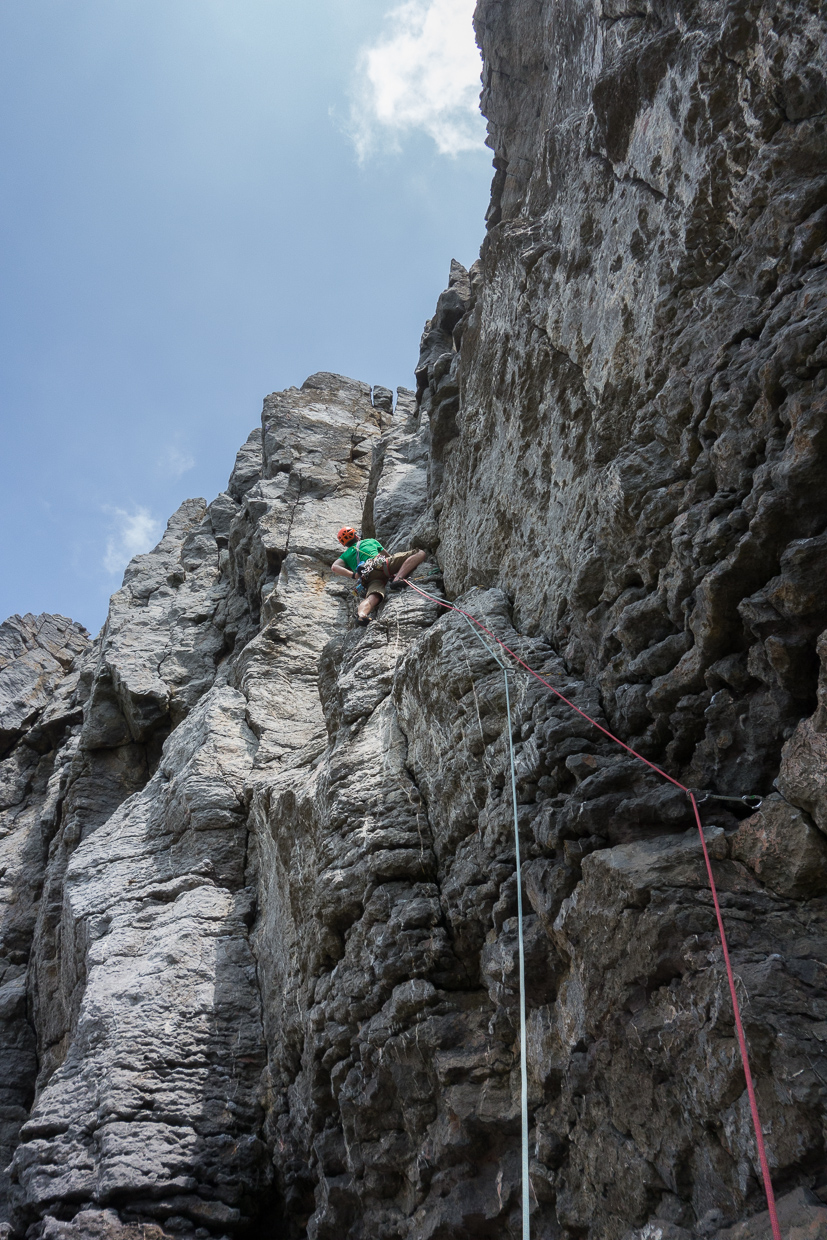 Me on the initial ramp of Deranged 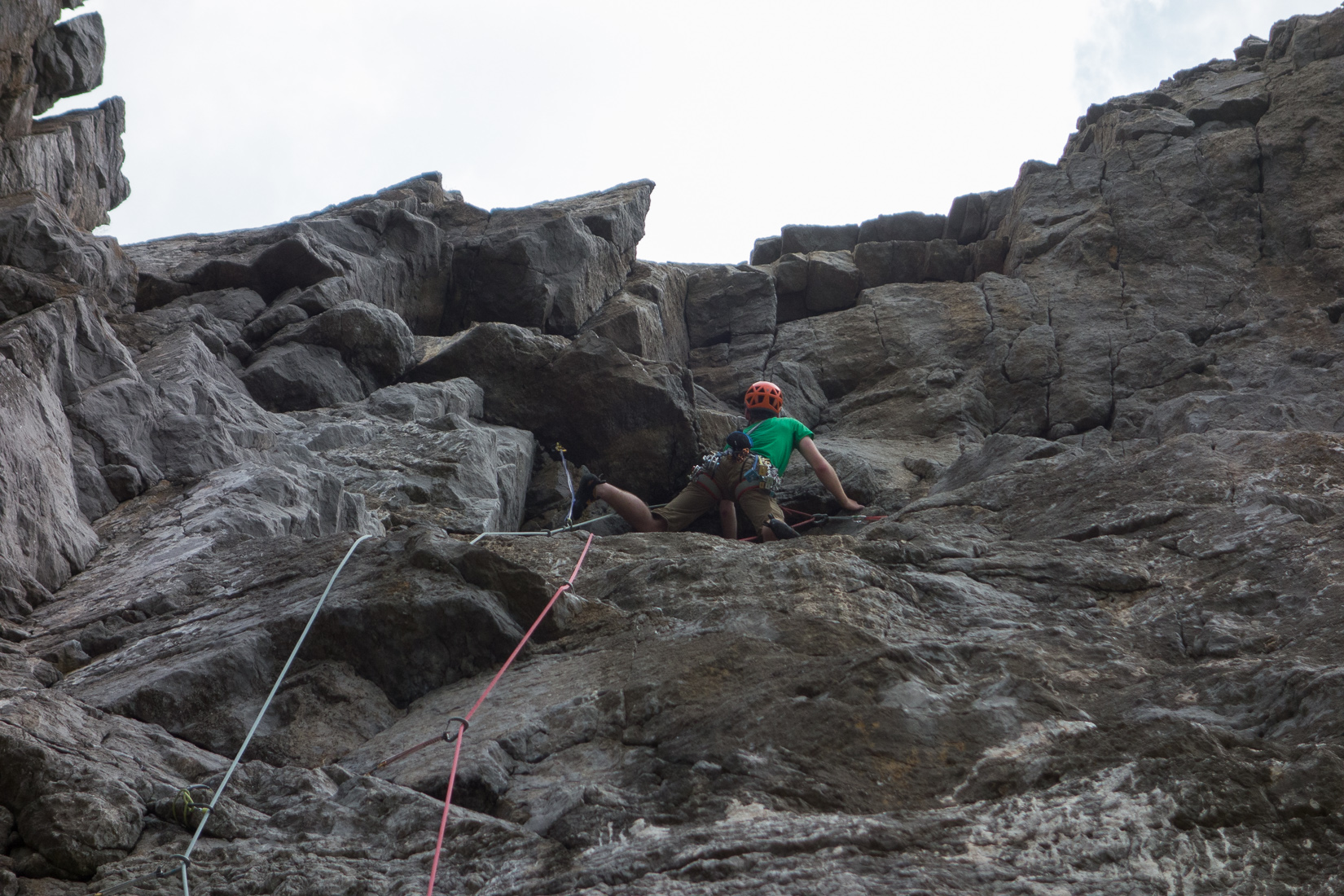 Me at the start of one the cruxes on Deranged

After this we headed to Saddle Head to climb Blue Sky, however it was very busy and we were both tired so we decided to call it a day and head back to the car for some ice cream and the drive back to Bristol, which felt like hard work.