Last weekend had a good weather forecast with a dominant high pressure system in power, this combined with excellent tide times meant a trip to Pembroke, which is one of my favourite climbing destinations. There were four of us which headed to pembroke, myself along with Rich, Nick R and Steve. It was a very successful weekend where Rich and I climbed 3 E1s, 3HVSs and a HS in good style with no falls or rests, I was very glad to get another 3 E1 leads under my belt and am now starting to feel more confident at the grade.

The first day was grey and breezy but dry and not too chilly, we started the day by heading to the legendary Mother Carey’s Kitchen, also known as Mother Scarey’s due to its intimidating nature. I started the morning by leading the classic E1, Rock Idol, which heads up a very distinctive corner and contains some brilliant, very sustained and steep climbing. I was very happy to get the route cleanly, especially due to the slightly greasy morning rock with the odd wet hold. 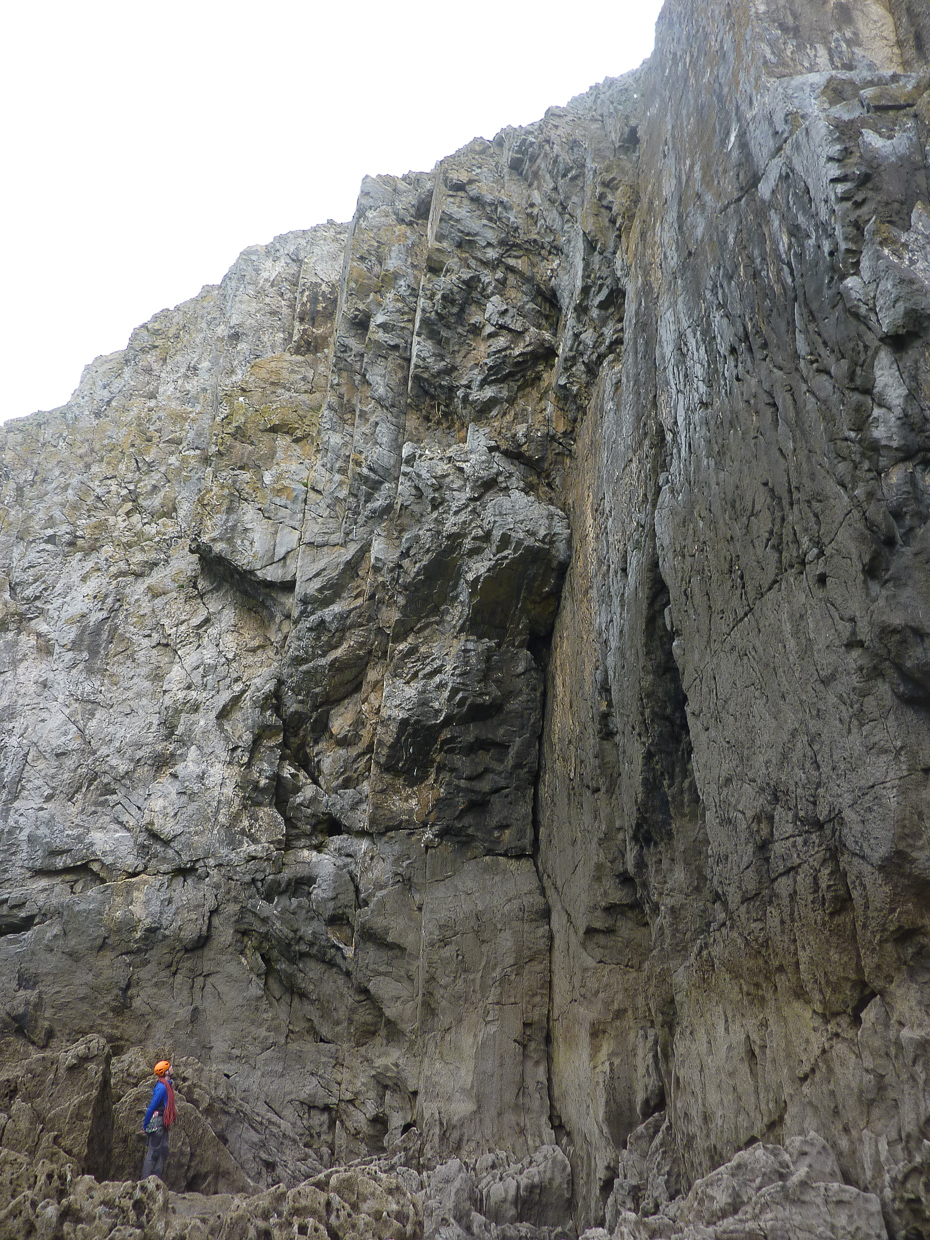 Me looking up at Rock Idol ((c) Richard Nicholson) 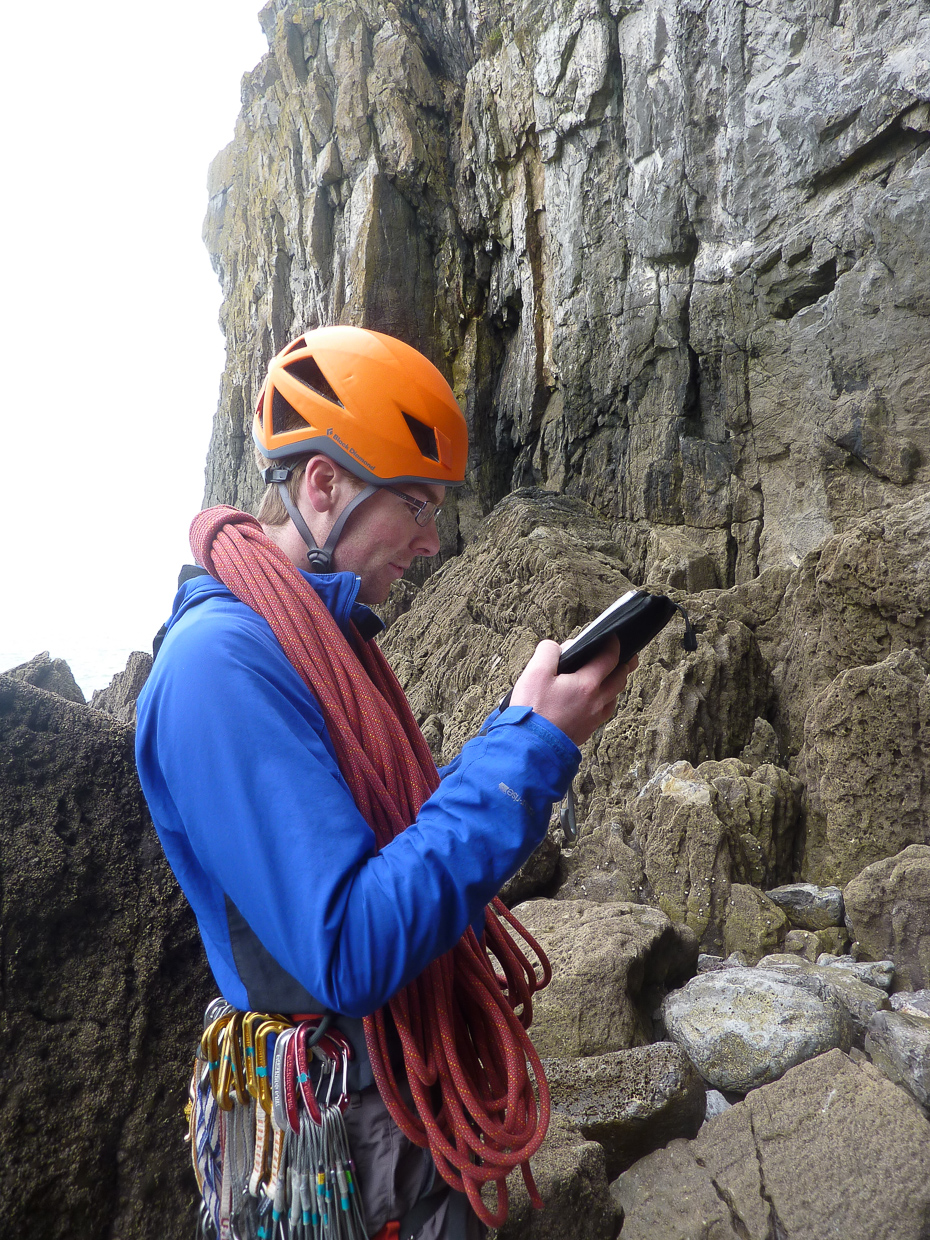 I wonder where I need to go… ((c) Richard Nicholson) 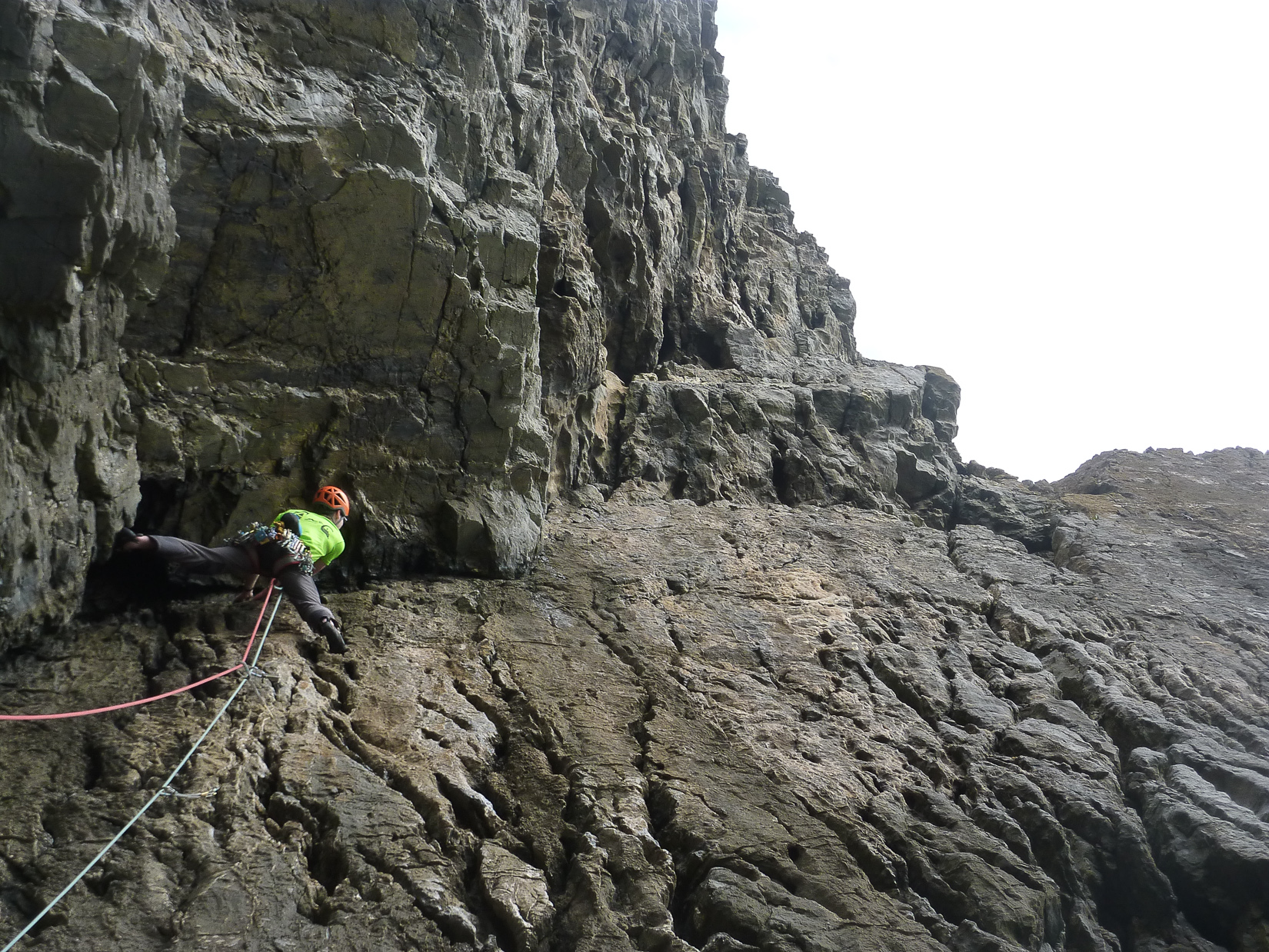 It’s about to get steep! ((c) Richard Nicholson) 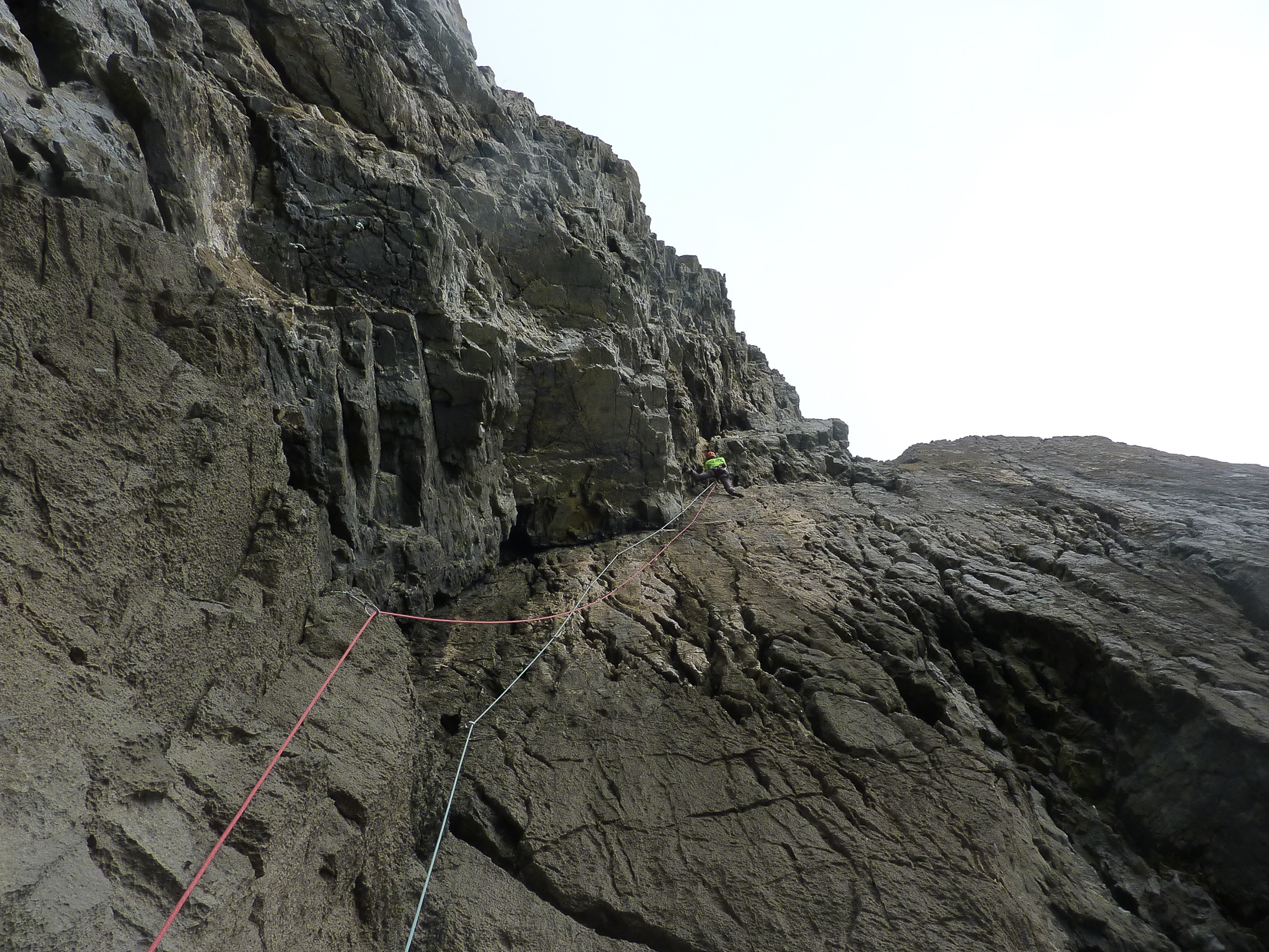 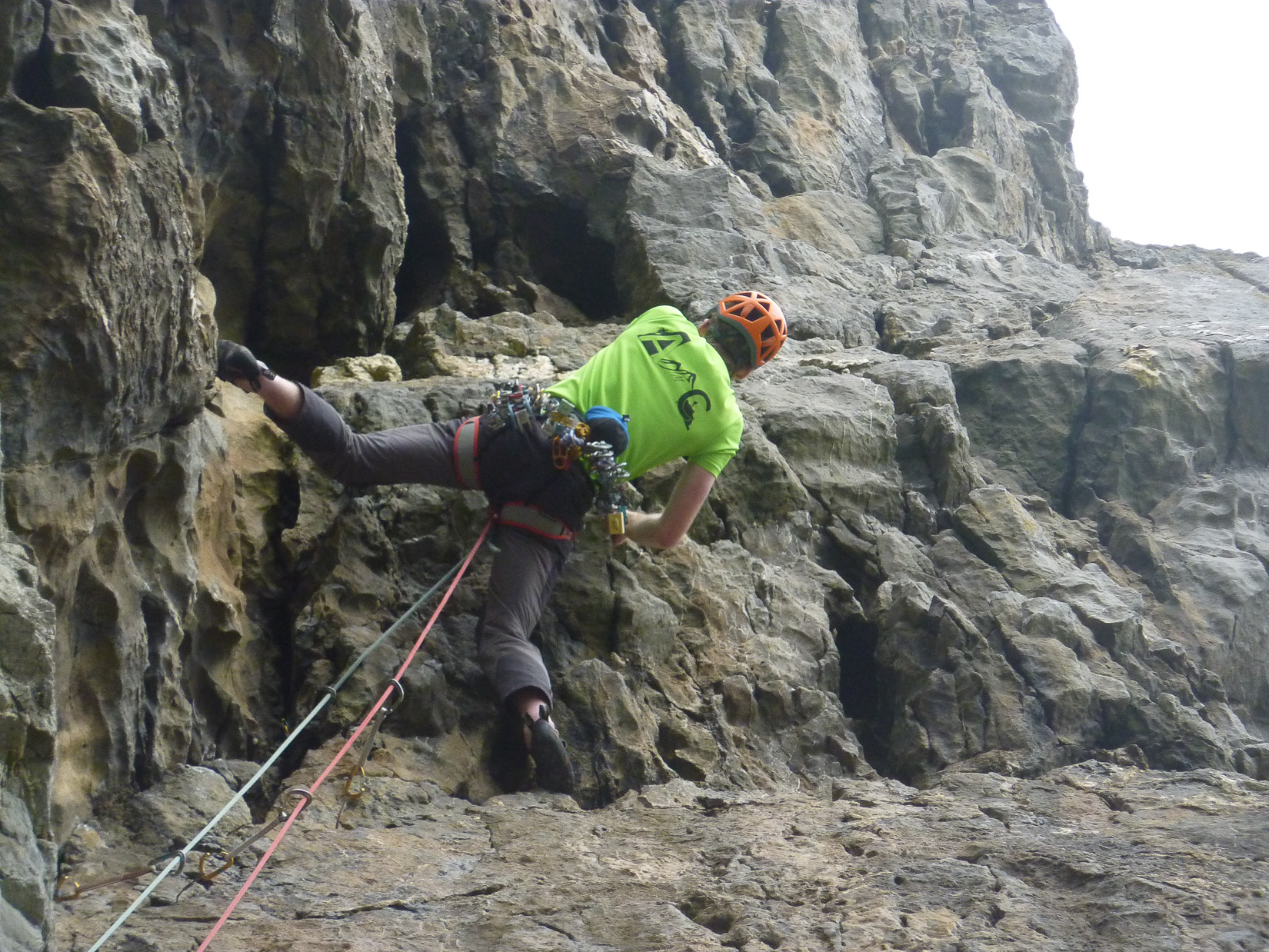 We quickly made our way back down and Rich headed up an HVS route just to the right of Rock Idol called Joyous Gard. This route looked improbably steep for an HVS but with a mixture of some wide bridging and some excelled holds the steep section didn’t actually provide the crux, which was provided by the sustained wall above. It was a great lead from Rich which left me to lead the second pitch through a cave and onto rock which only seemed to be held together by mud which rather focussed the mind considering the lack of runners. 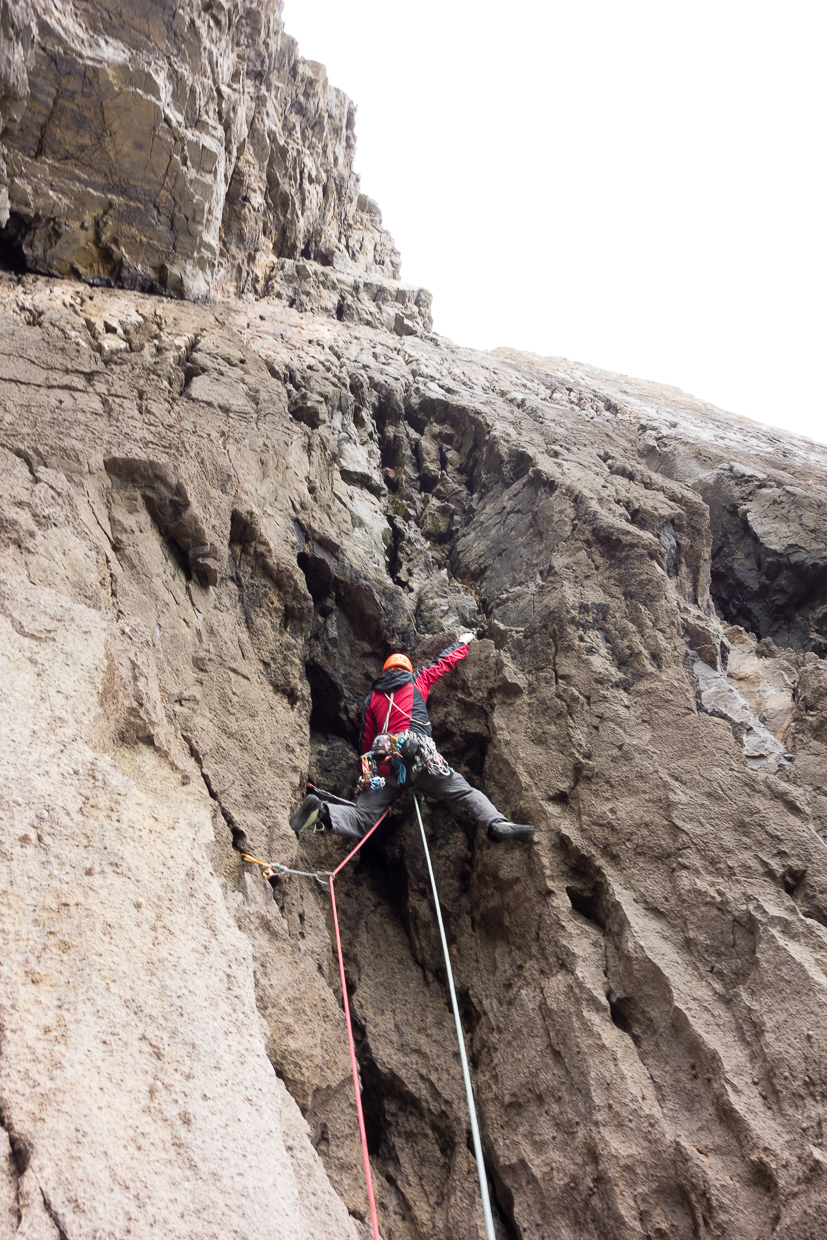 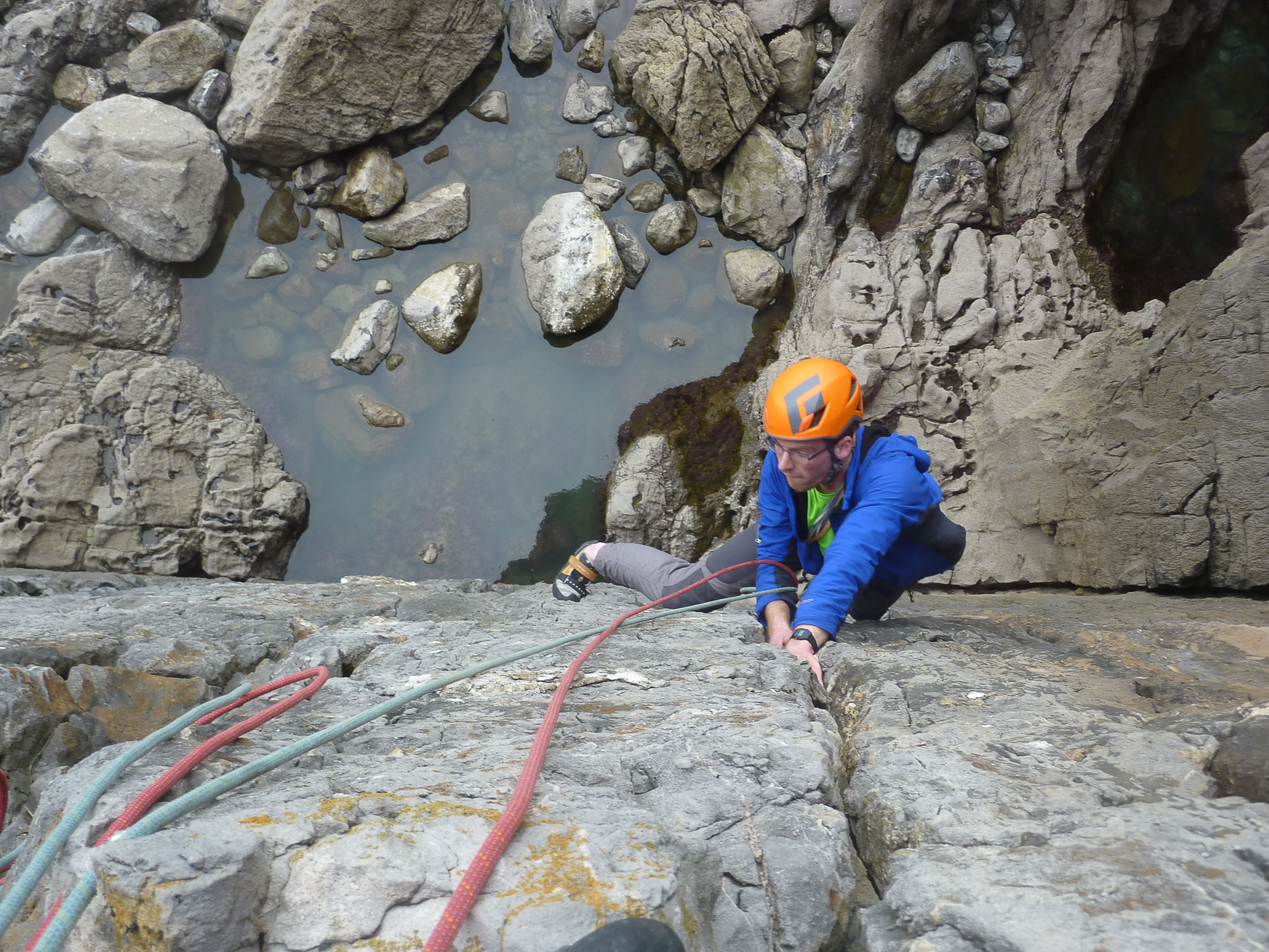 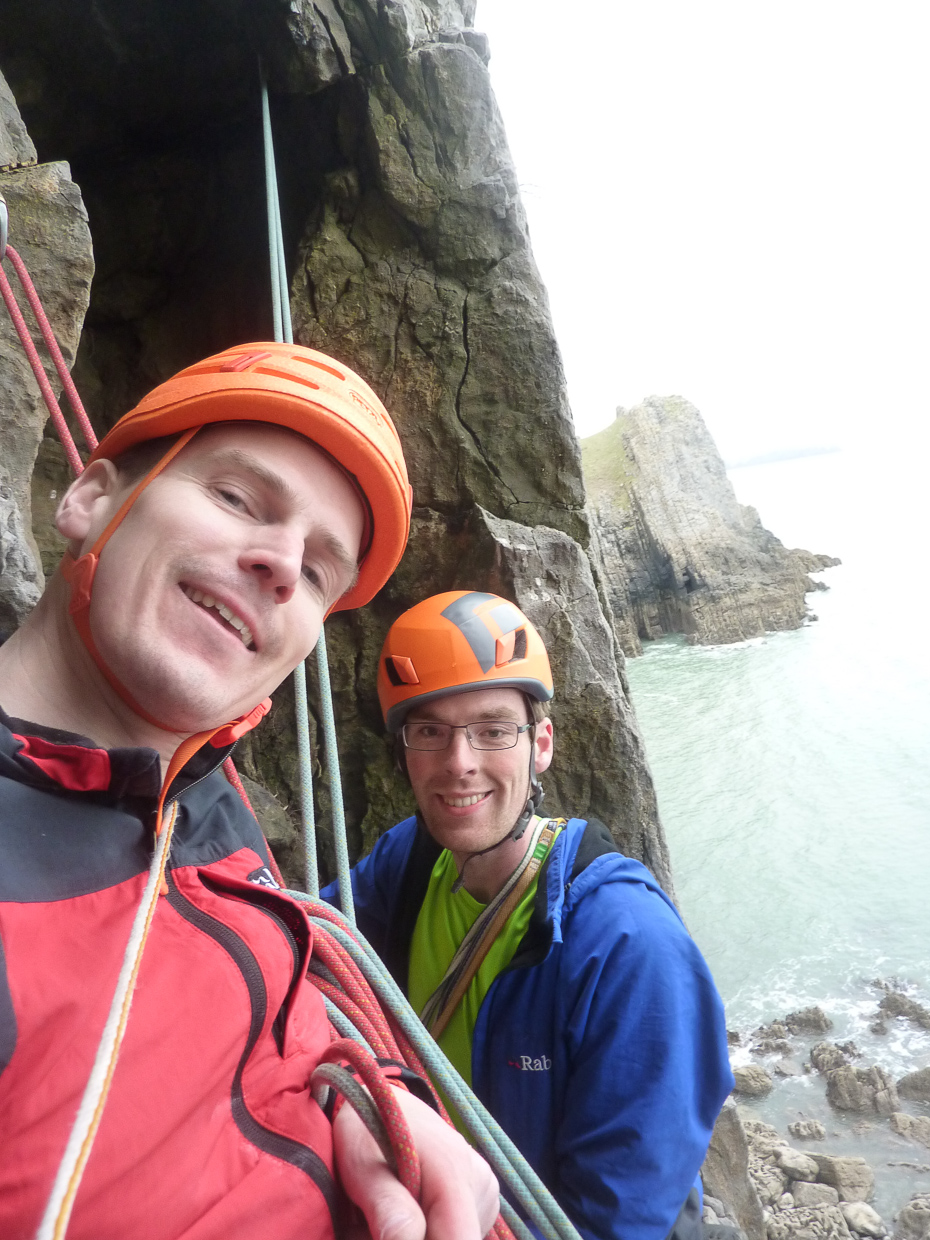 On the belay ((c) Richard Nicholson)

After this we decided to head over to some non tidal rock in the Range East climbing area. We headed to Crickmail Point, otherwise known as B-Team Buttress. This is a single pitch non tidal venue with no bird bans, but neither of us had visited it in the past, presumably because it is about as far as you can get from a car in Pembroke (a long 30mins…)! I started up the E1 named after the crag, B-Team Buttress Direct. This was a fantastic route with lots of different climbing as it started up a very steep thuggy crack, before heading into a thin slab with poor gear and then was finished with a final headwall which was very run out at the top. This certainly focussed the mind as I was a long way above gear as I got pumped out of my mind, somehow I ignored it and managed to keep climbing and made it to the top.

After this we headed back down and Rich lead Aero which was an HVS with a steep start and then some easier climbing to the top, after this we decided we were both very achey, and I was complaining about my fingertips being very sore. We spent the evening in the St Govan’s Inn enjoying good food and beer while planning Sunday’s adventures. 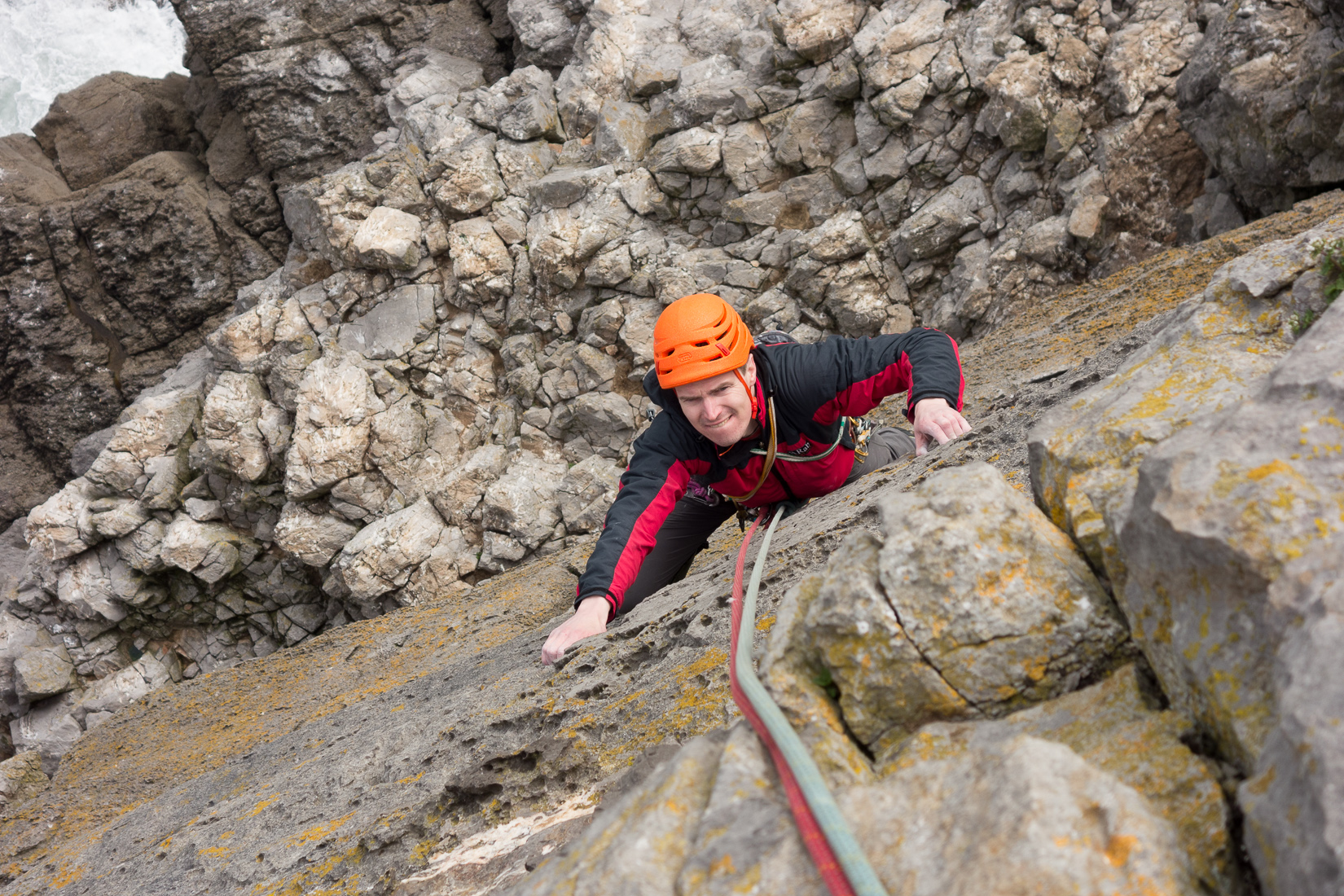 We elected to spend Sunday at Mowingword, a crag I have fond memories of due to my first pembroke climb being at this crag. When we arrived the tide was still not fully out, so we abseiled in to a ledge just above the sea and Rich headed up Snozwanger, which turned out to be a very tough but brilliant HVS with an easy first pitch and a spicy second pitch which we ran together as one pitch.

After some food we then headed back down with the aim of climbing Blowin’ in the Wind which is an E1 up the same section of rock. While I was abseiling Rich noticed Nick making good progress up the crackline of New Morning after climbing the classic Heart of Darkness. 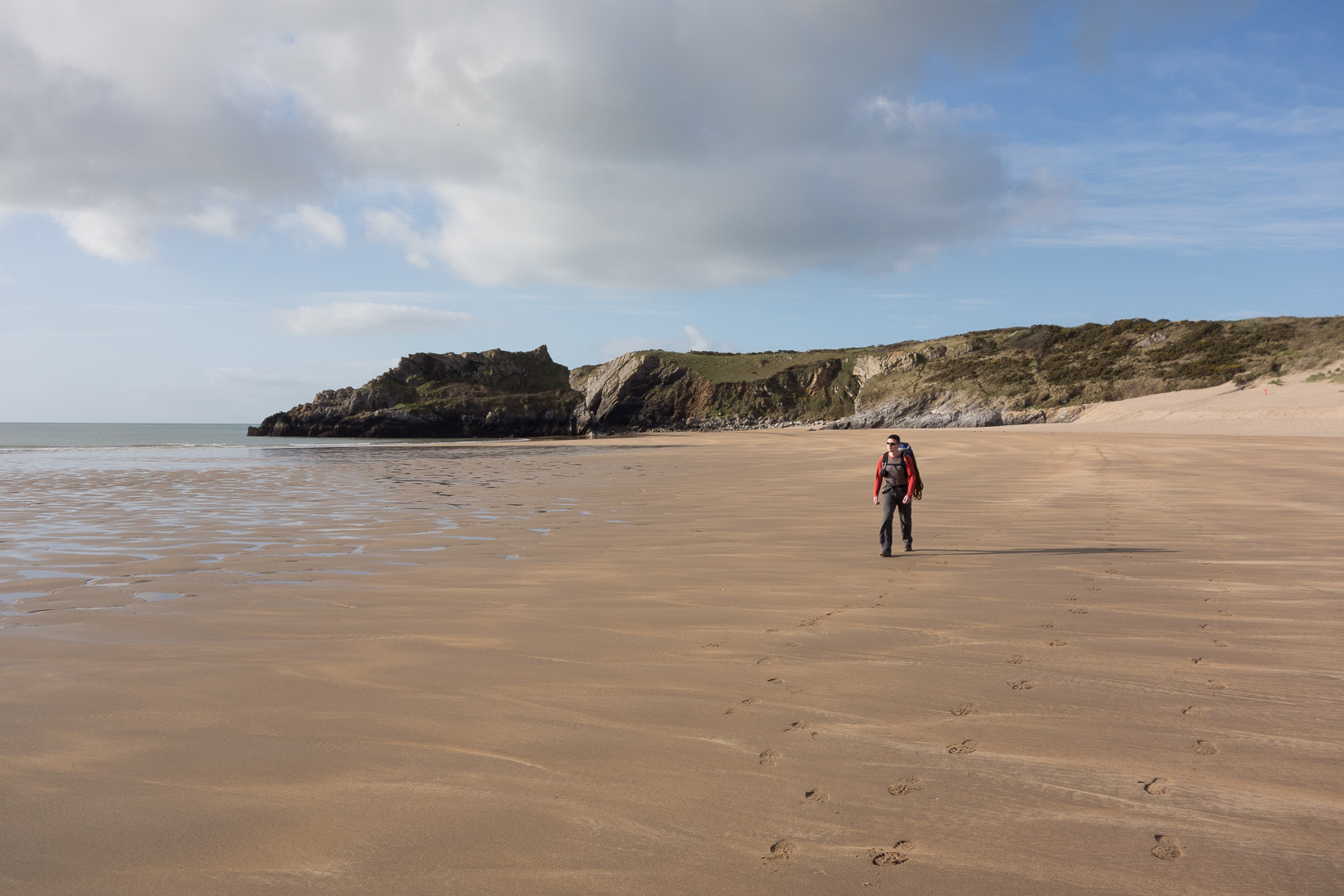 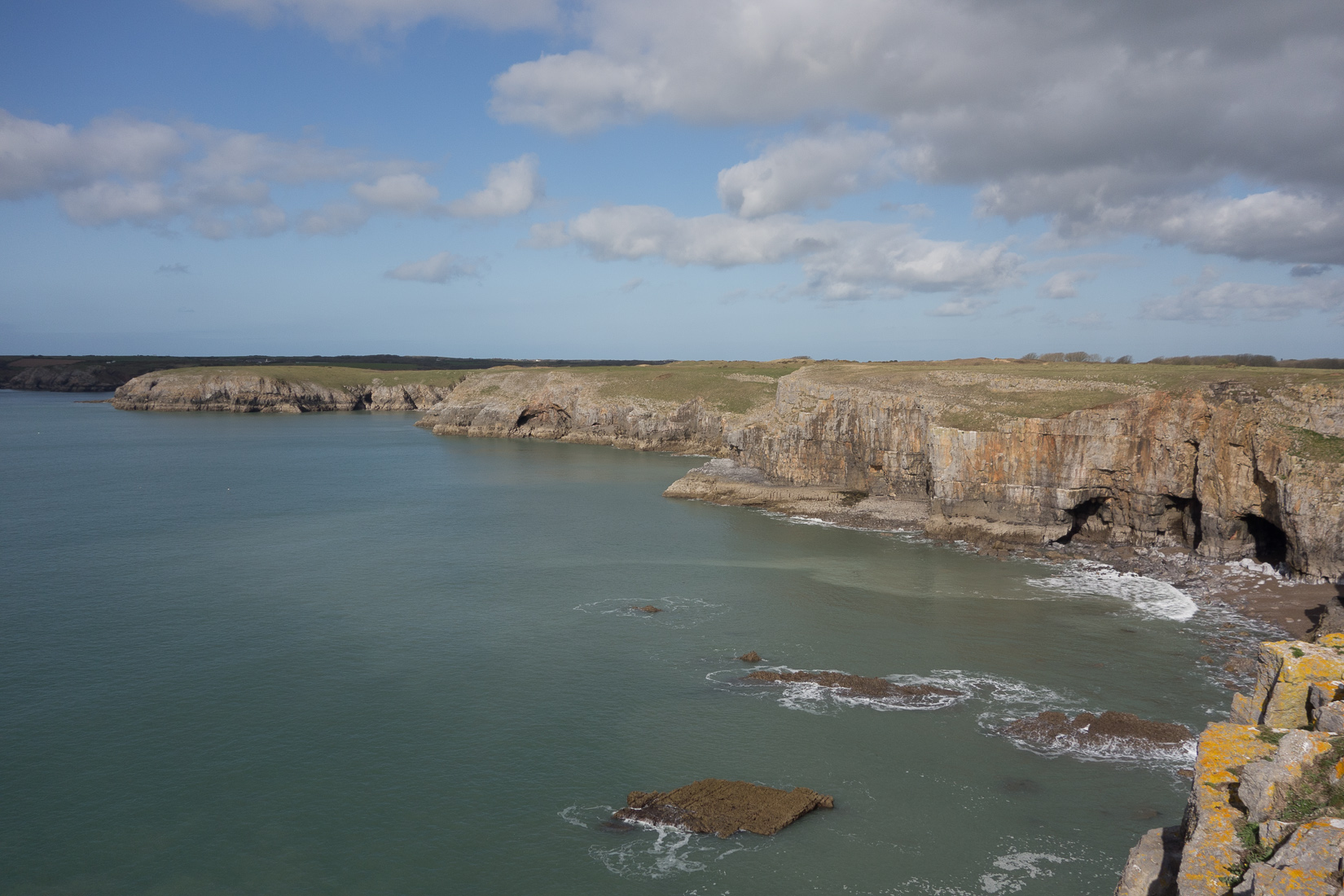 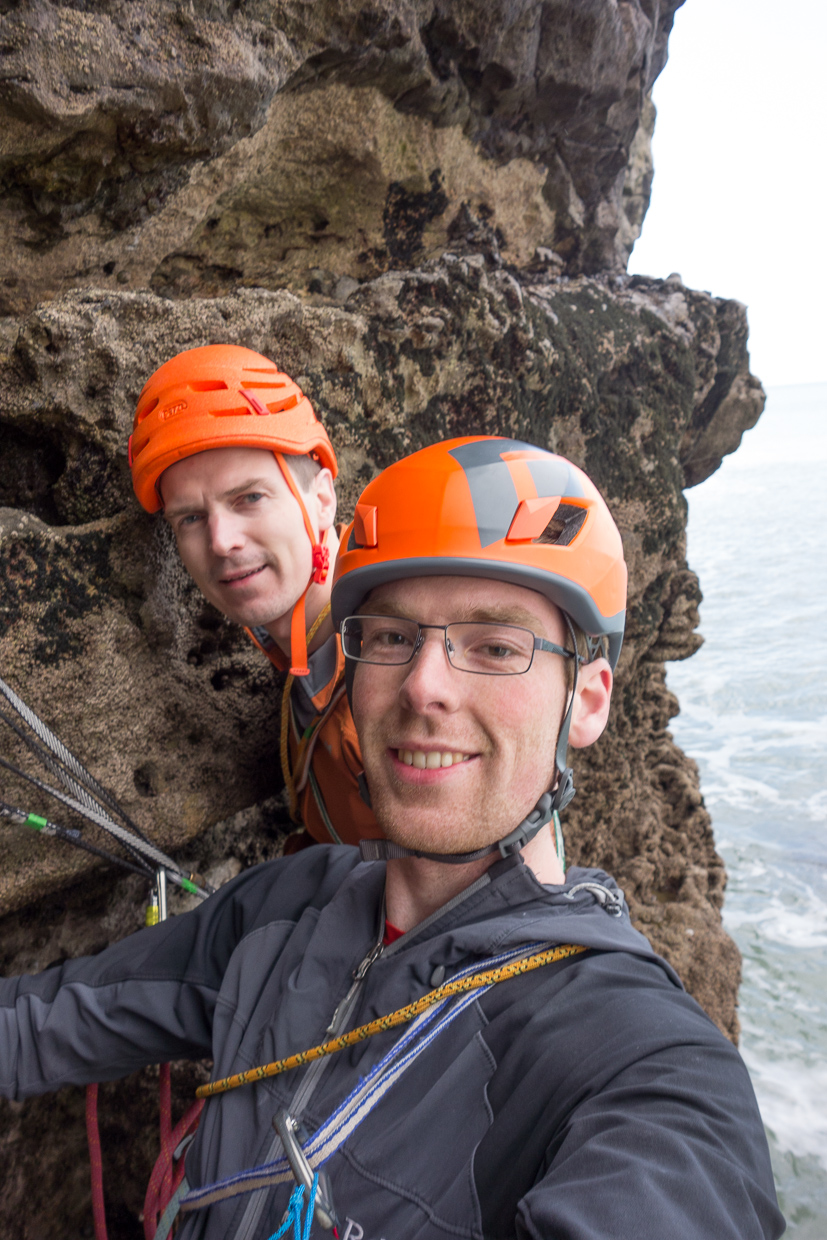 On the belay just above the sea 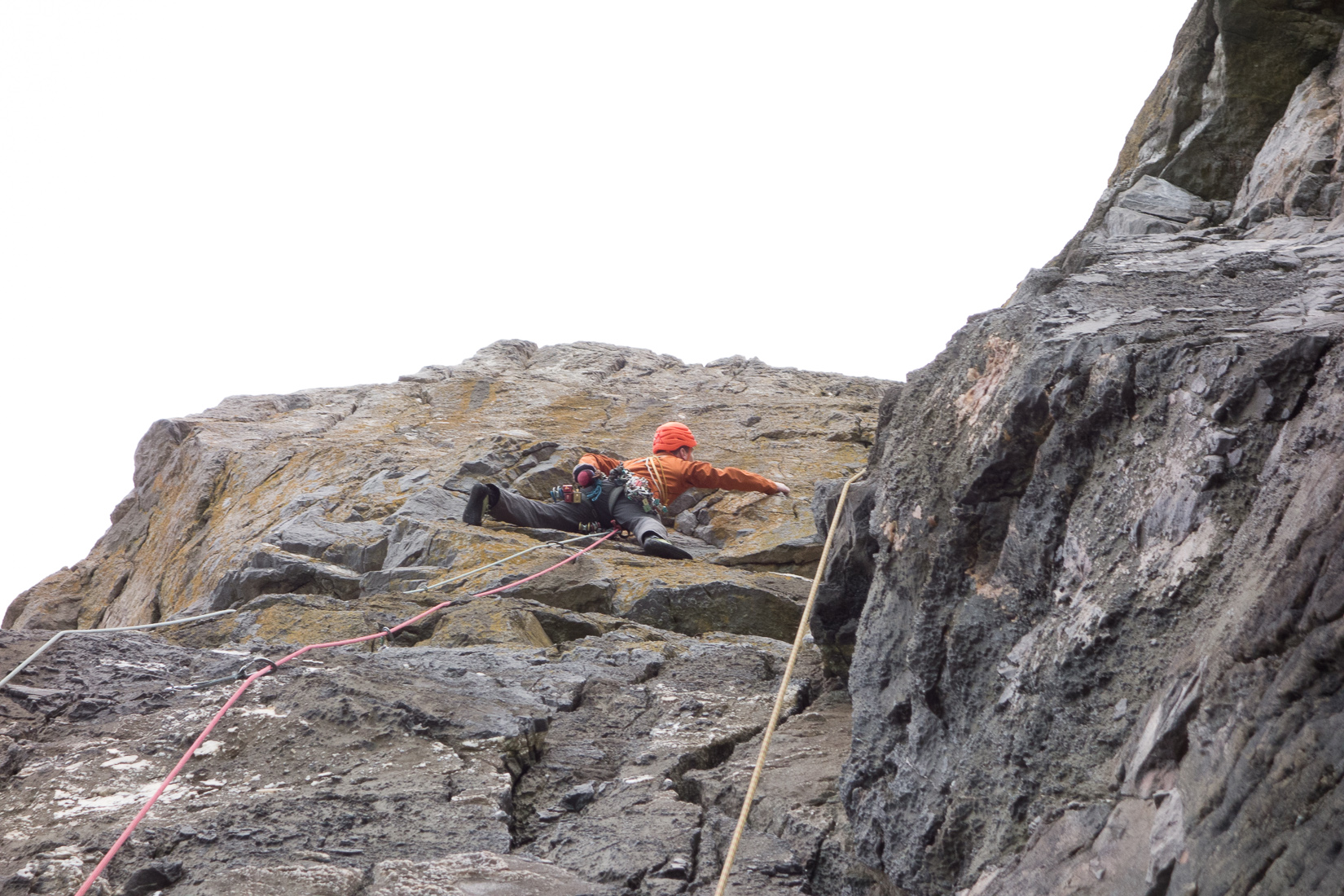 Rich up high on Snozwanger 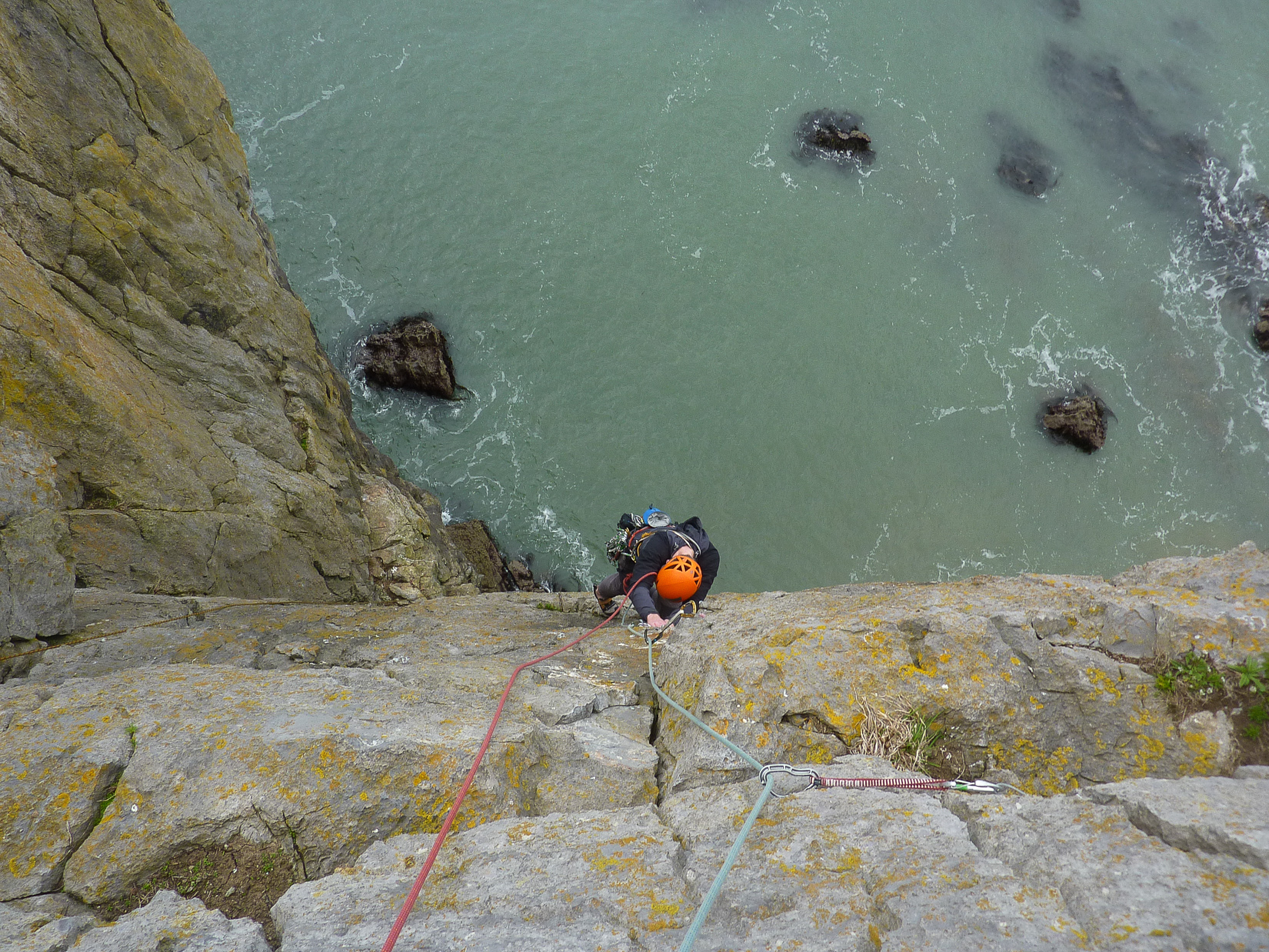 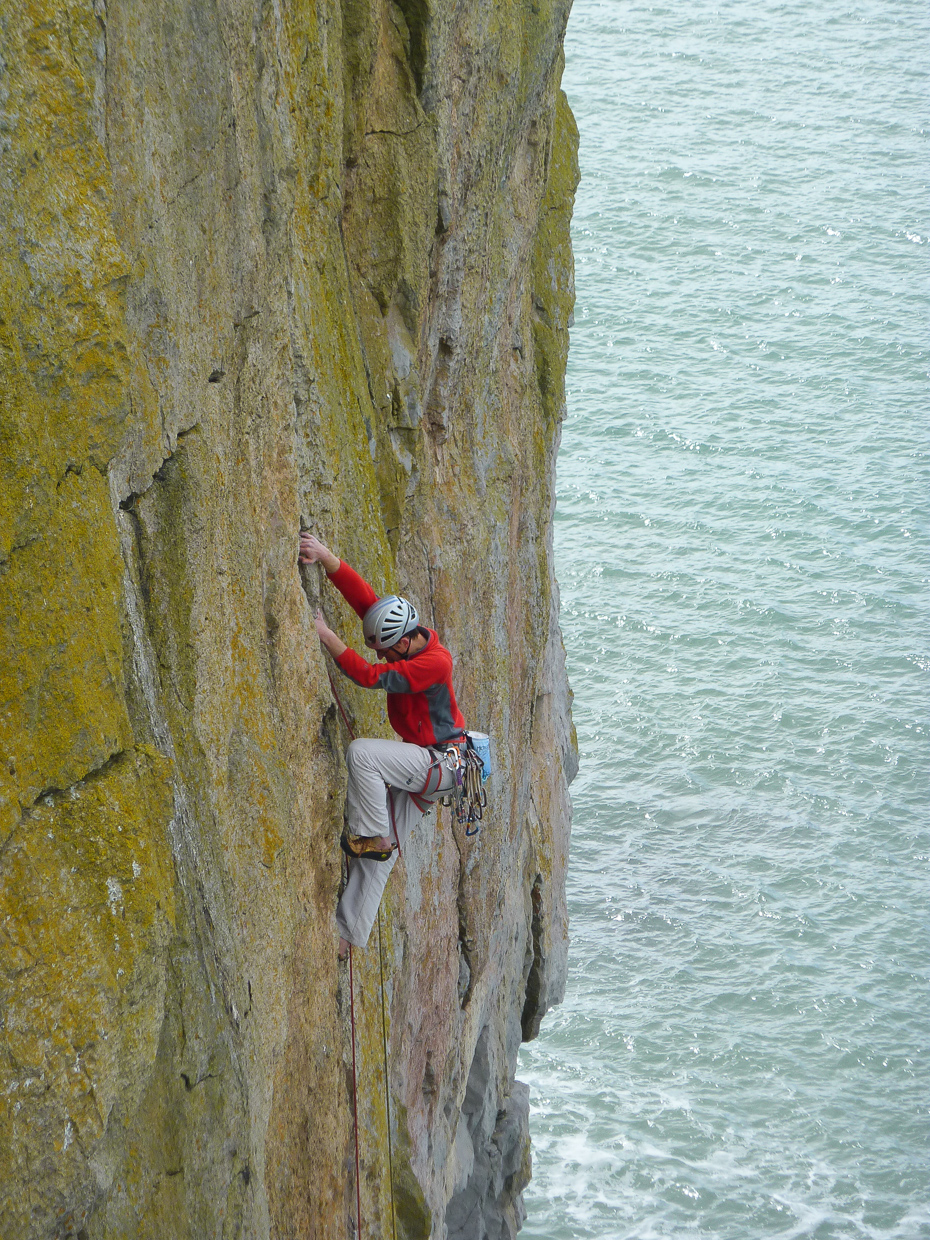 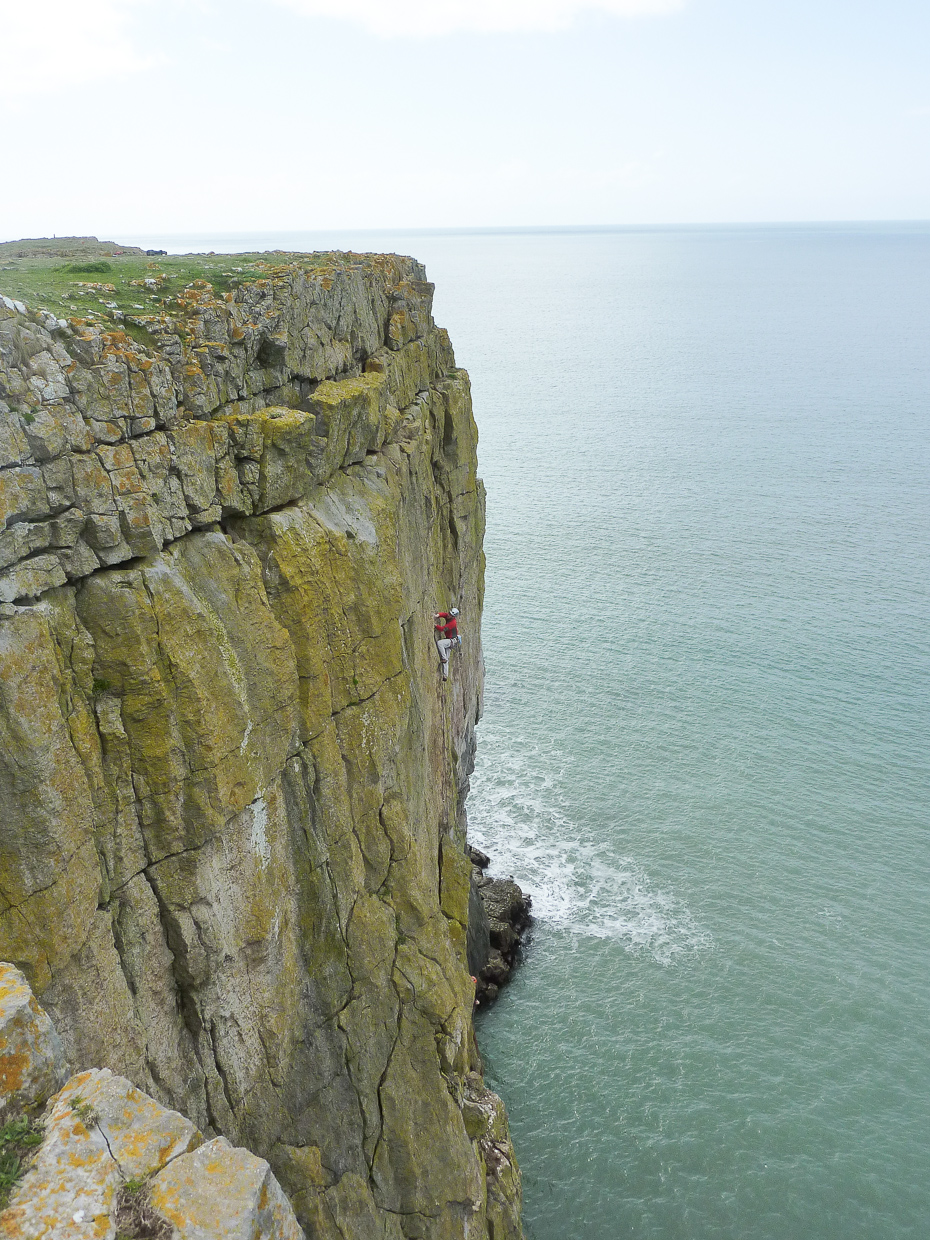 We had to traverse around to the base of my route, which lead to an exposed hanging belay above the sea, and below a very intimidating groove. I headed up and was surprised by how committing the first section felt, but I quickly committed before enjoying some easy but bold and exposed climbing up the arete. I then got to the optional belay and the start of the E1 pitch, it took my a while to work out the sequence to climb the overhang but I eventually worked it out before committing to the steep and very strenuous face above, I didn’t have much left in reserve at the top and I got a nasty surprise when a hold I was pulling on with both hands at the top out moved! 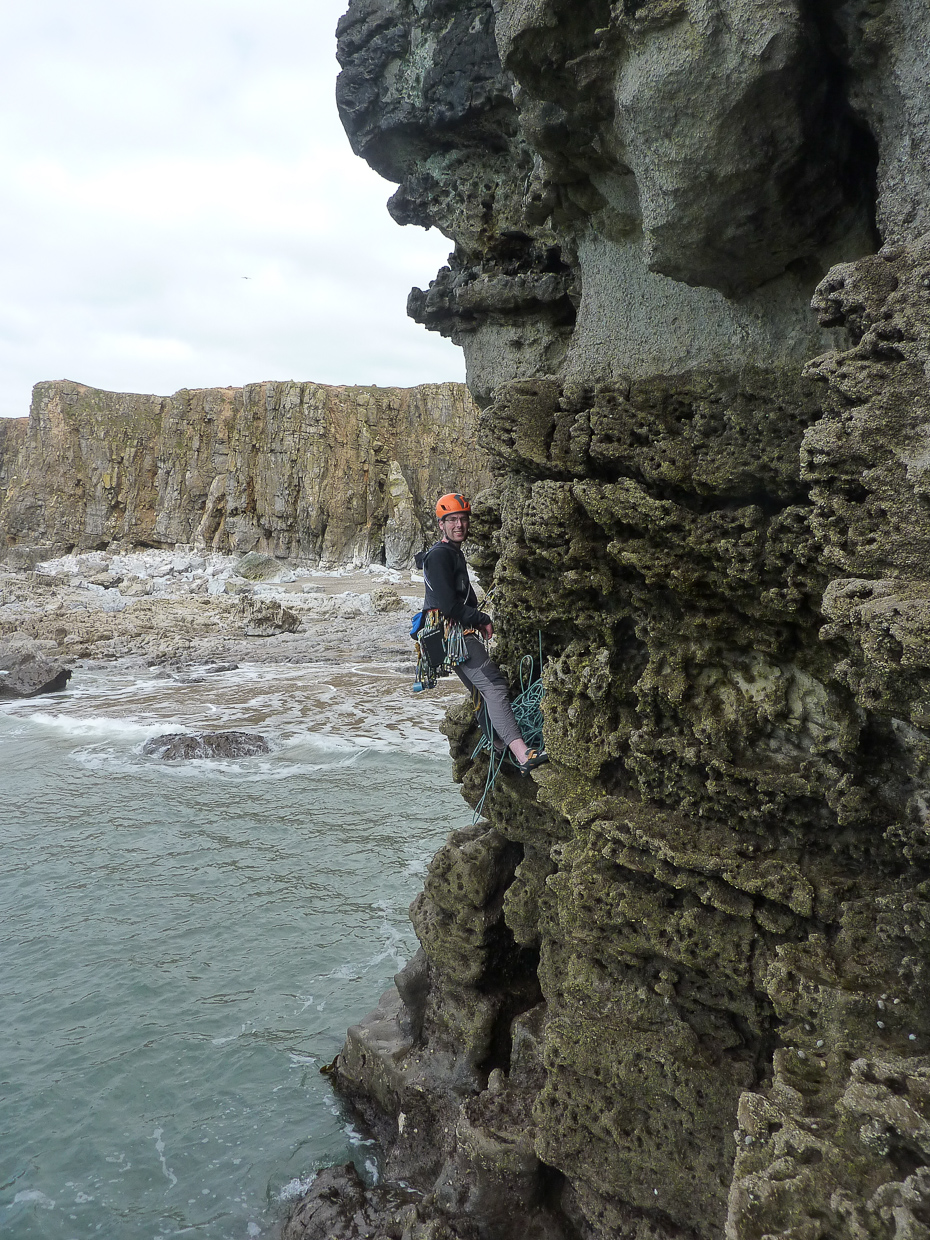 Hanging belay below Blowin’ in the Wind ((c) Richard Nicholson) 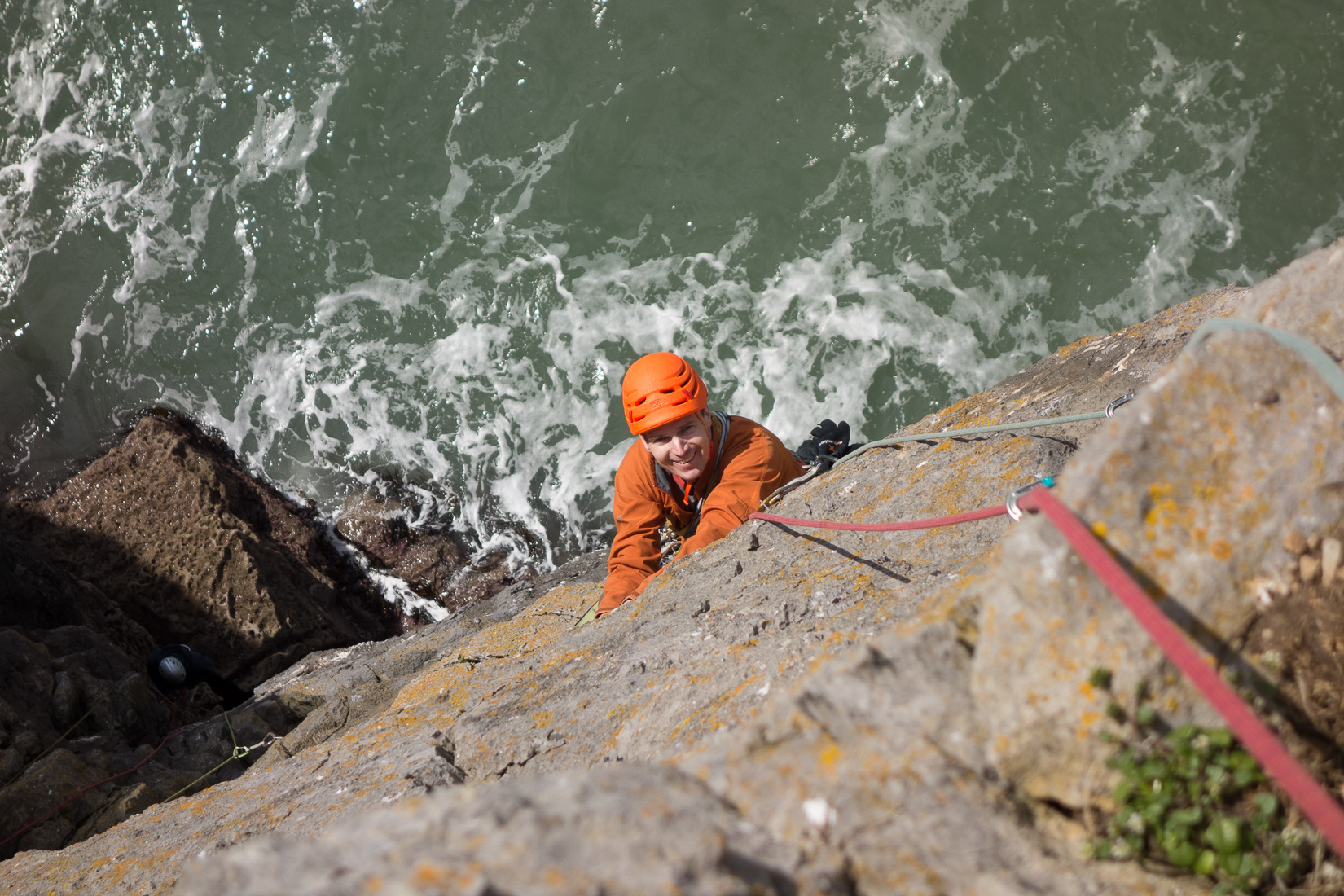 Happy on Blowin’ in the Wind 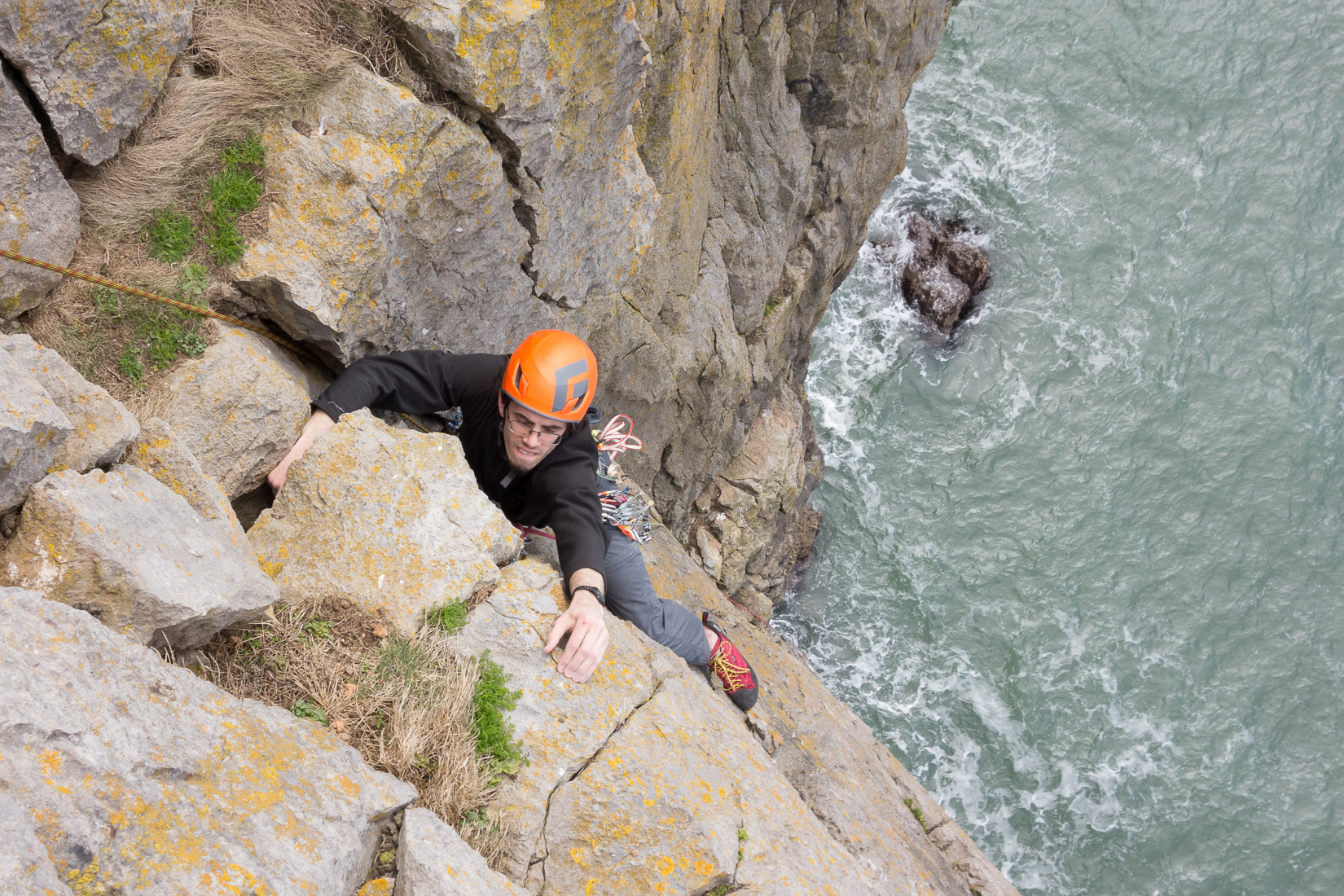 Steve at the top of Diedre Sud

In order to make the most of the tides we quickly abseiled back down and climbed the classic HS, Diedre Sud. The tide was fast approaching and I was glad Rich made quick work of the route as by the time he was finishing I was beginning to get splashed by the sea! It was a great route and if you were a HS leader at the belay at the bottom I can imagine it would feel like a very intimidating place to be!

At this point we decided to call it a day due to being tired, achey and the bottom of all the routes being covered by the sea. We enjoyed a leisurely walk back to the car to enjoy an ice cream before heading back to Bristol. 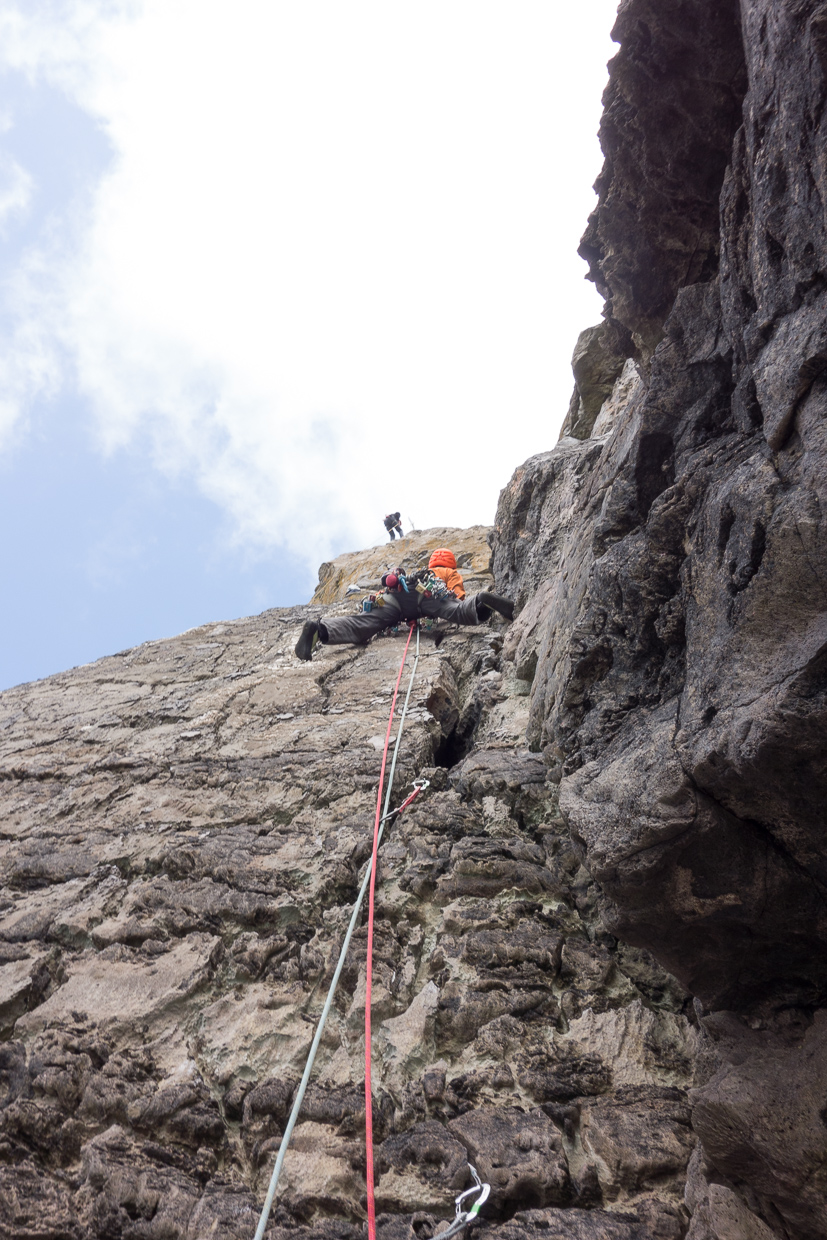 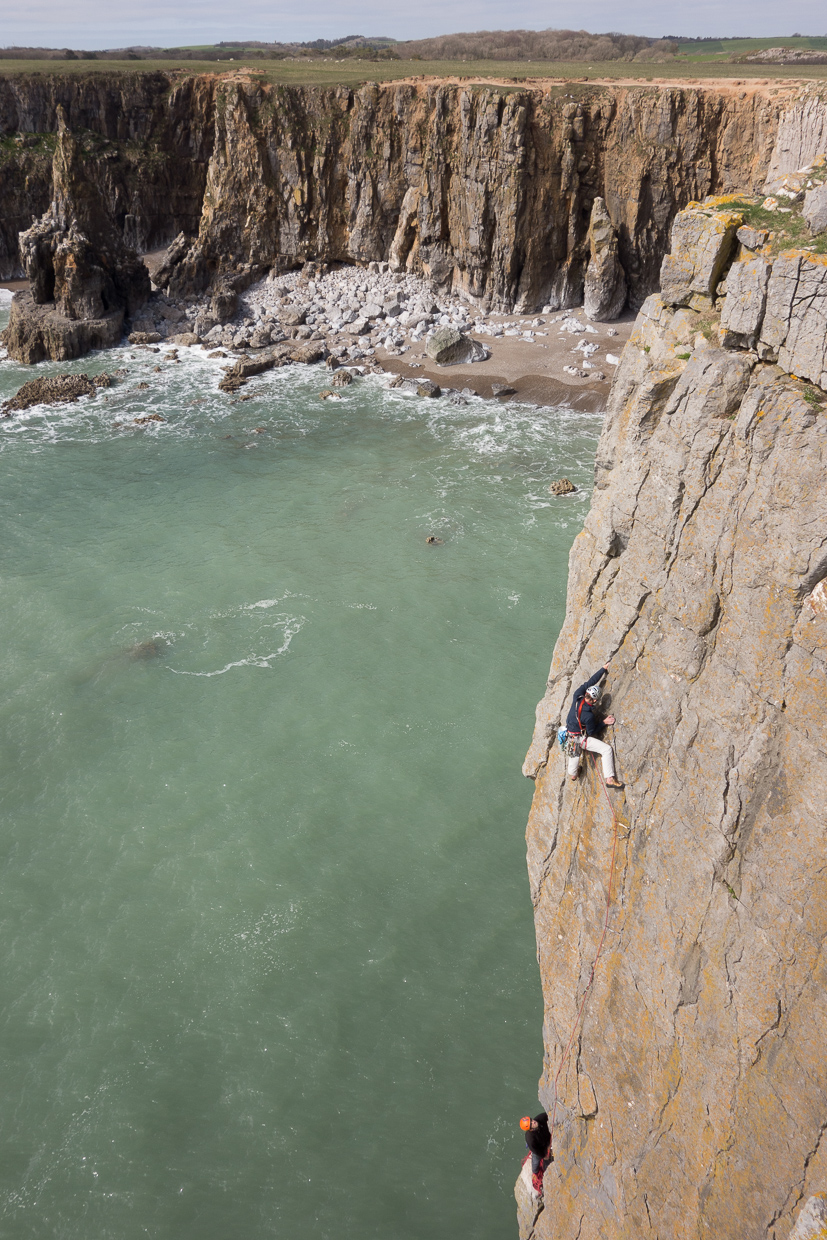 Nick high on Blowin’ in the Wind