With a good weather forecast and still not much in condition for climbing due to loaded slopes I decided to have a big day out mountaineering on the Ben. My plan was to head up to the CIC hut and solo Ledge Route before heading up to the summit of Ben Nevis and then descend via the classic Carn Mor Dearg Arete.

It became clear on the drive over that the weather wasn’t as nice it was was forecast to be, but I was up and driving so I carried on. On the walk up through the forest it started raining fairly heavily which soon turned to snow once I exited the forest, this made the walk up to the CIC hut a fairly damp affair. I made good time and was at the CIC hut in 1hr20mins despite headwinds and snow below the hut, there were a number of other parties out heading for objectives such as waterfall gully and one party was planning on heading to the Minus Face. 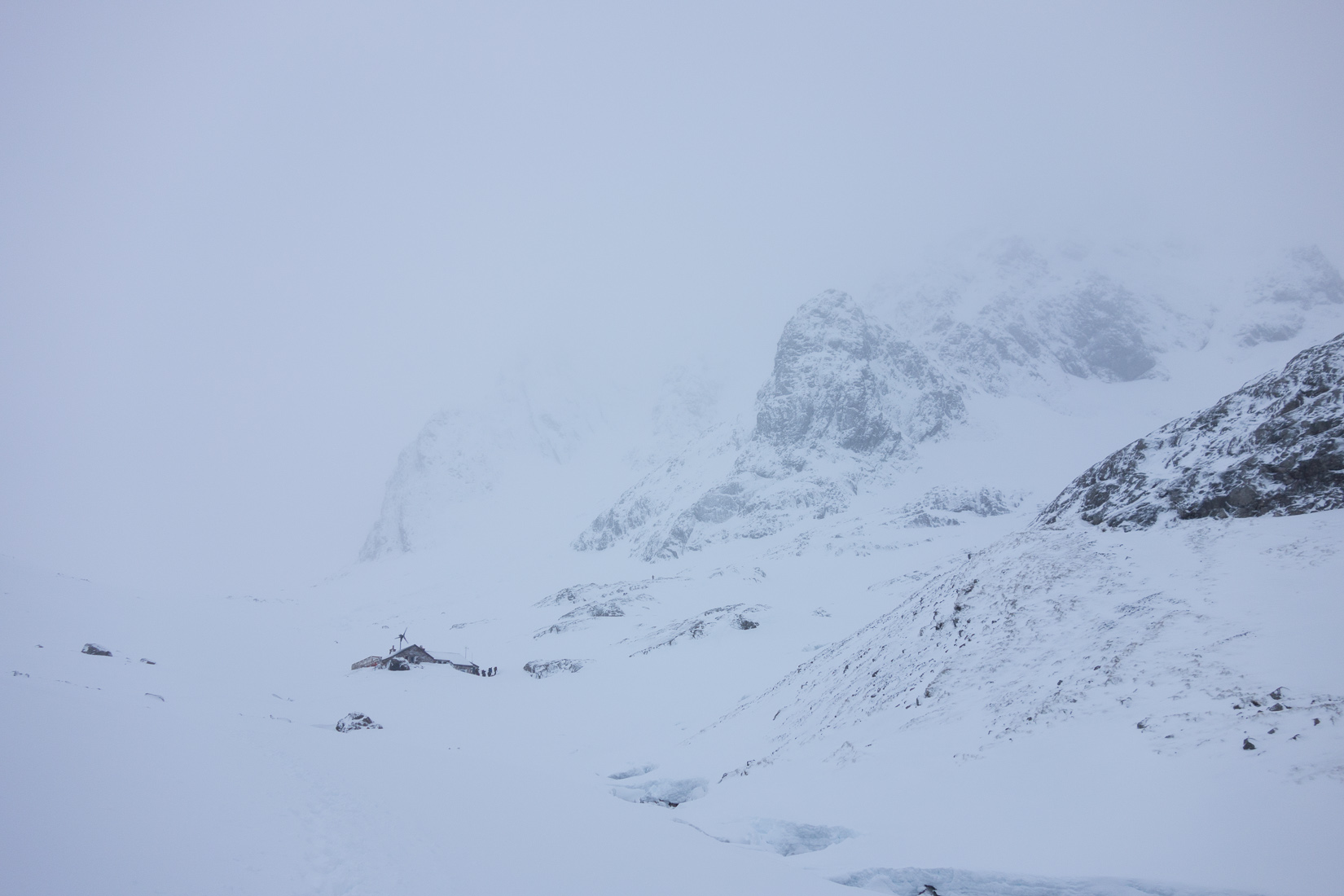 I was grateful of the party heading to Waterfall gully as it meant that I could use their footprints which saved a considerable amount of breaking trail. I was soon at the entrance to Number 5 gully and decided the snowpack was ok to continue but didn’t hang about in the gully due to not knowing what was above me. Ledge route was so banked out that it was not at all technical, it didn’t matter for me as I was soloing but if you wanted to protect it your options would be limited at the moment. Despite being banked out the conditions weren’t too tiring once I had left Number 5 gully as the snow under the 4” of powder was firm. It was a fantastic route up taking you though seemingly unlikely terrain before arriving at a fantastic ridge line which is followed all the way to the summit of Carn Dearg. It was a shame that I ascended up into the cloud as the view would probably have been spectacular otherwise. 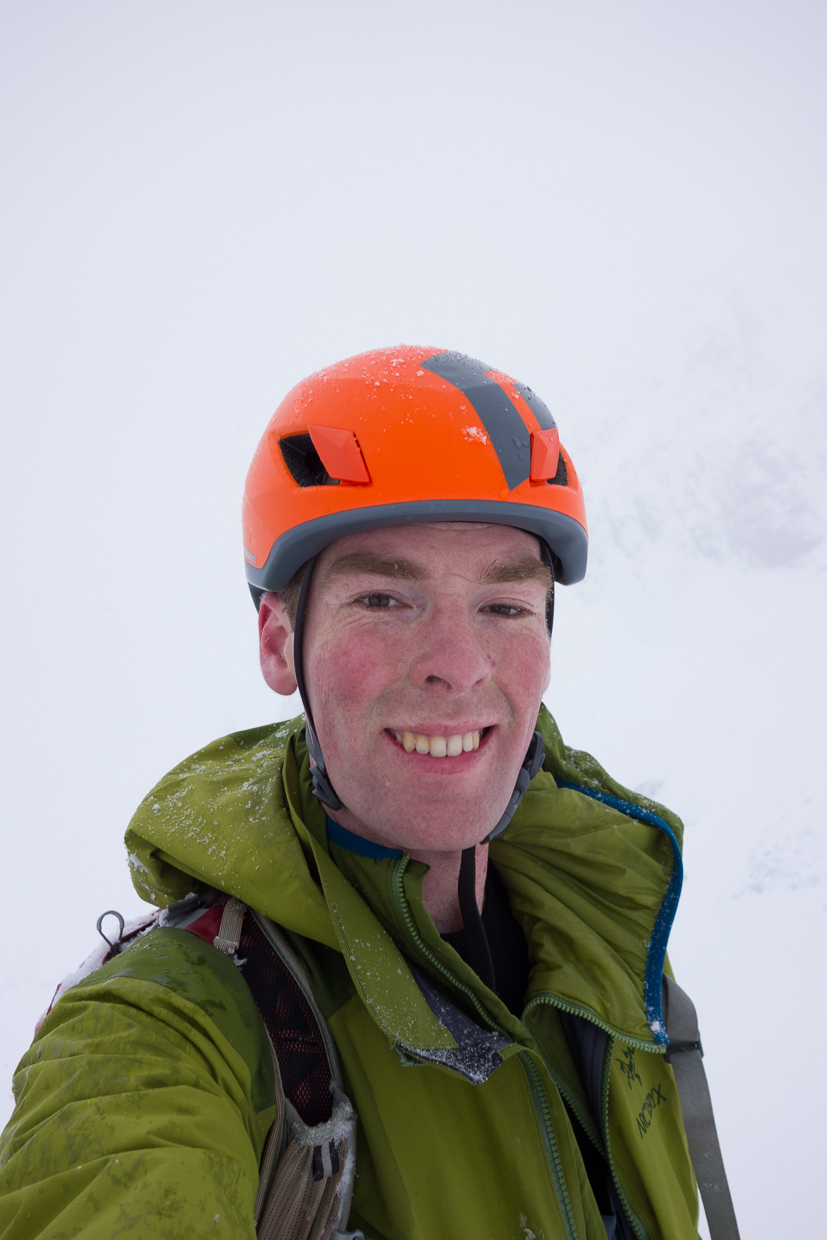 Happy at the start of Ledge Route 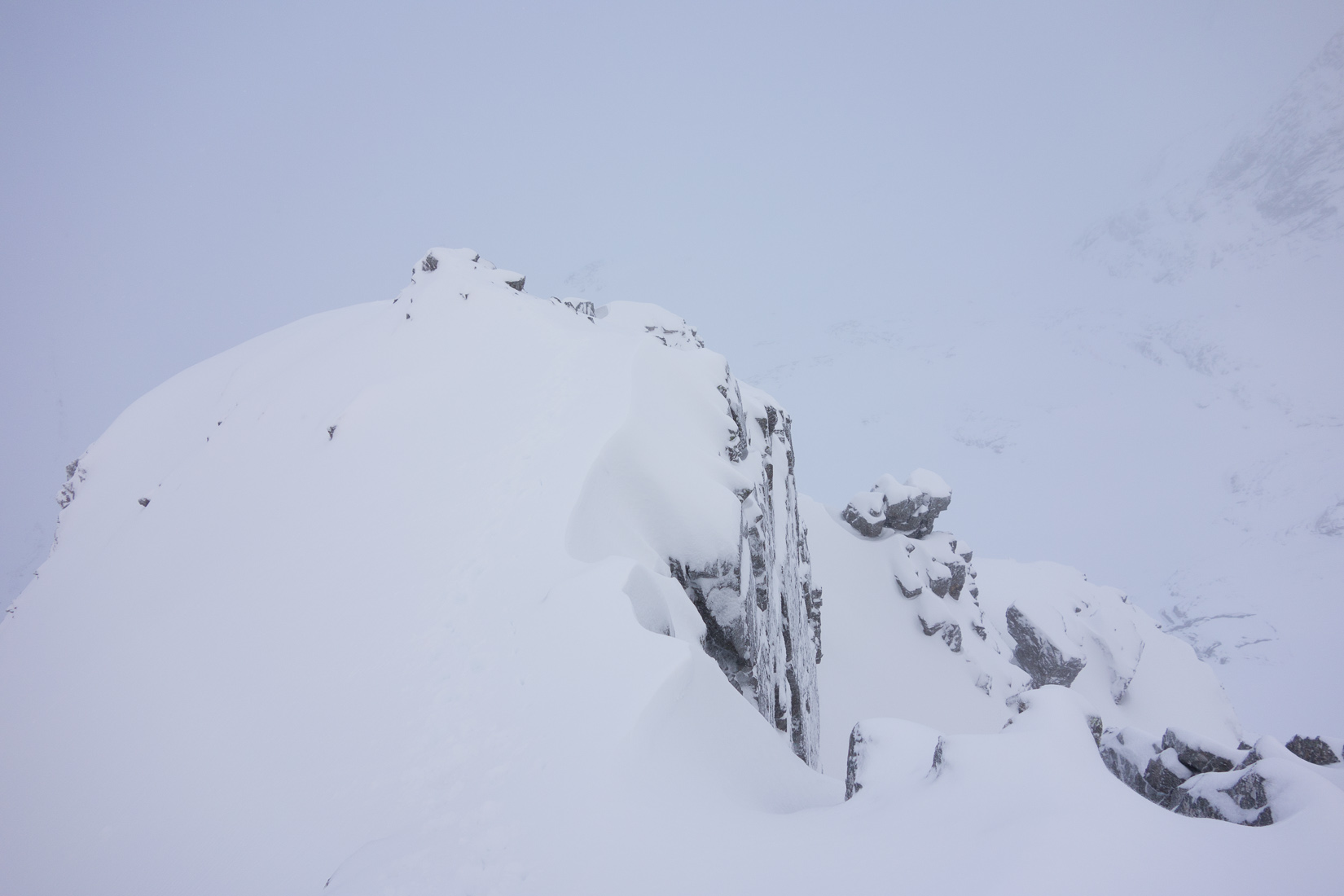 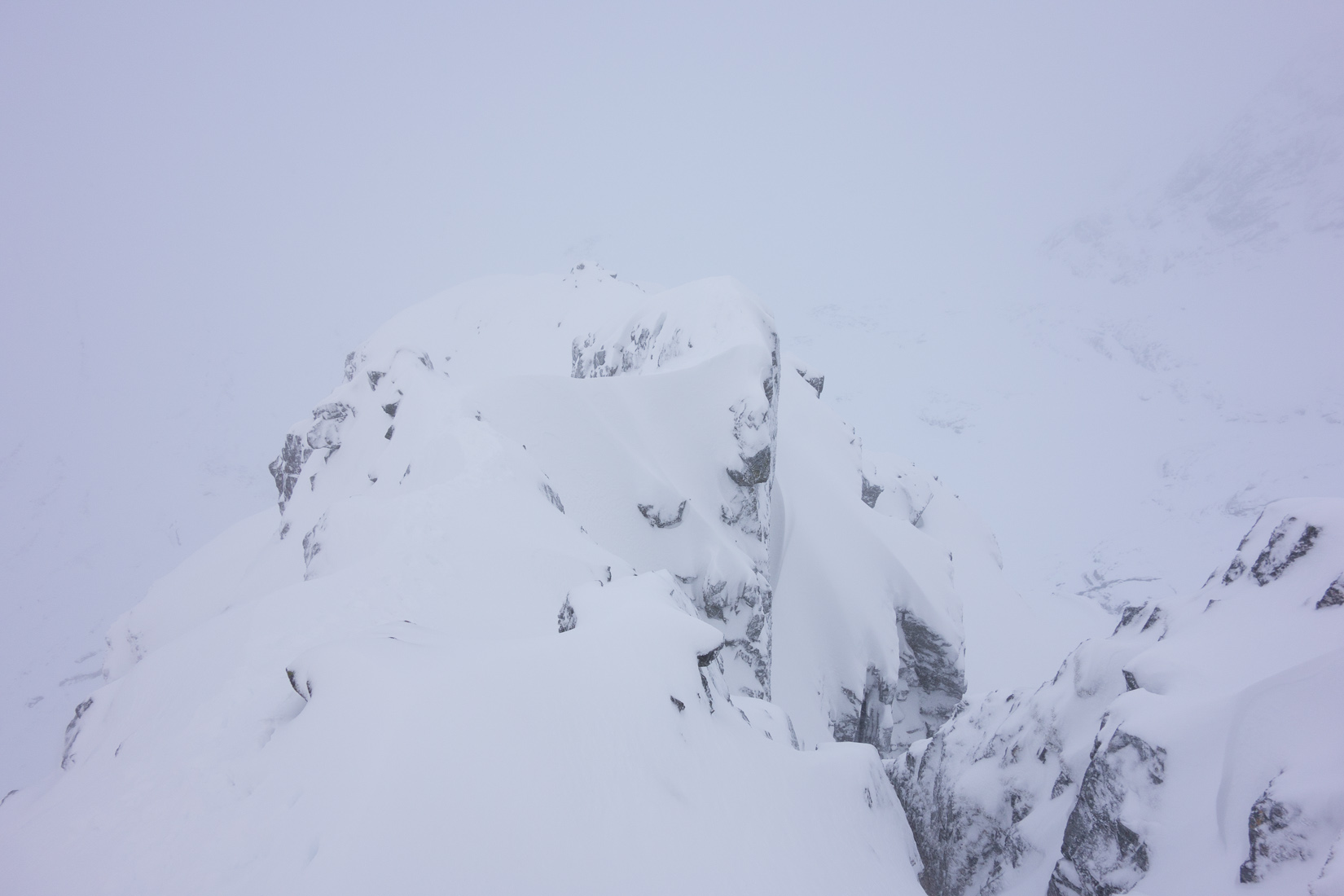 Once I arrived at the summit of Carn Dearg I considered heading down due to whiteout and wind but then saw that it was still really early so decided to carry on, it was a mixture of wind scoured ice on the summit and deep drifts which made walking hard work. It was fairly challenging navigating to the summit of Ben Nevis and I was acutely aware that there were very large cornices on the north side of the plateau and gullies on both side which needed to be avoided. I arrived at the summit to find the trig point buried apart from the top 1ft and the summit shelter very rimed up. 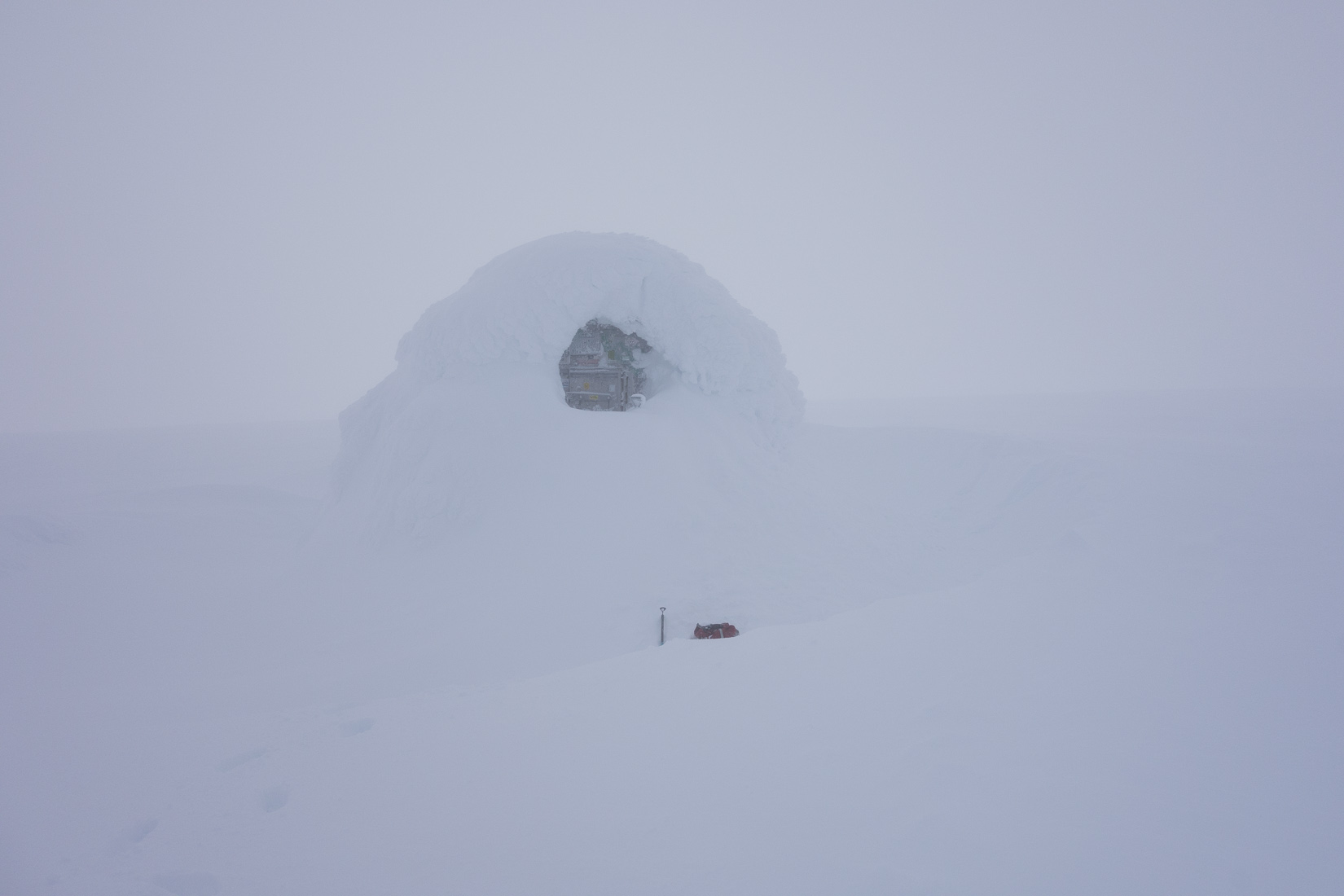 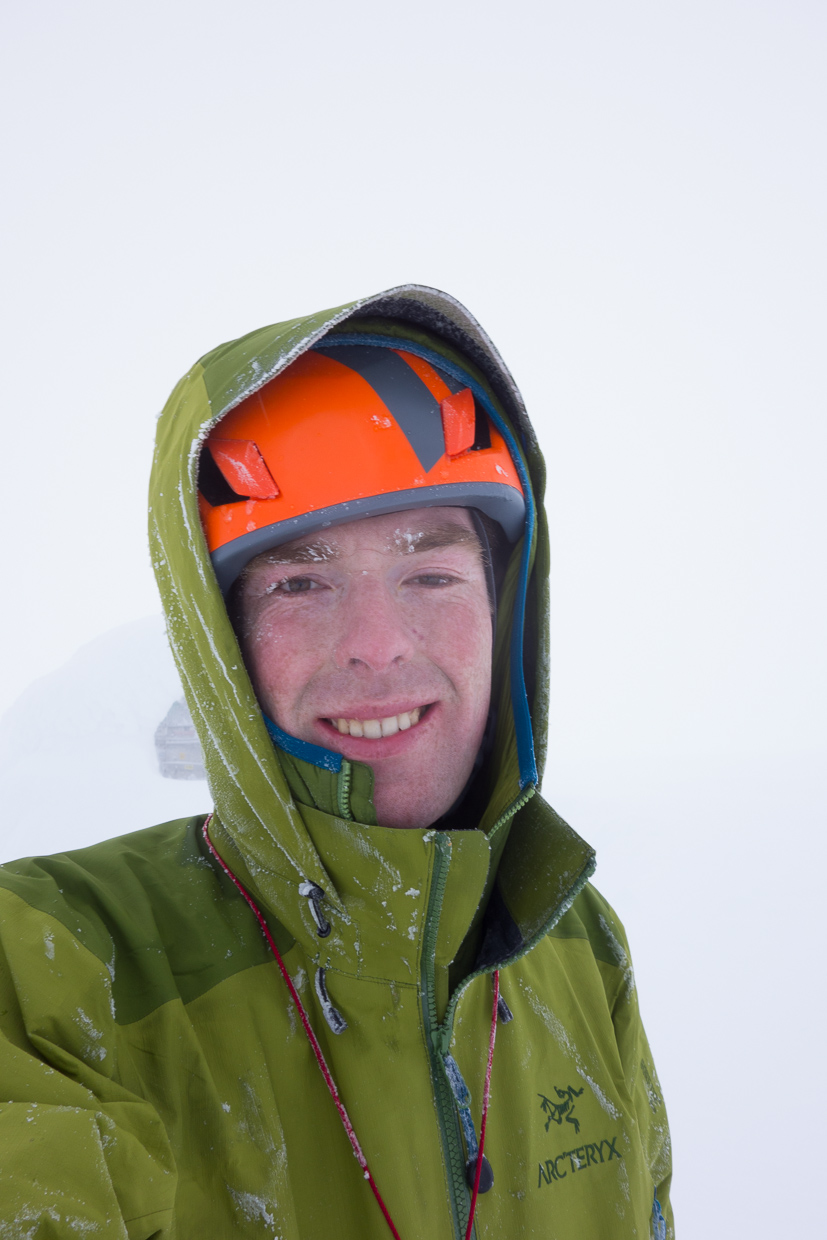 Happy to be at the summit

After a quick bite to eat I started descending to the Carn Mor Dearg arete, again making sure I headed in the right direction due to the cornices and drops, and I was glad to discover that the slope down was wind scoured which meant that it was icy and that the posts marking the edge were visible. As I descended Scotland did it’s magic thing and the cloud base lifted and presented me with a fantastic view of the Carn Mor Dearg Arete, Carn Mor Dearg and a view towards Glen Nevis. 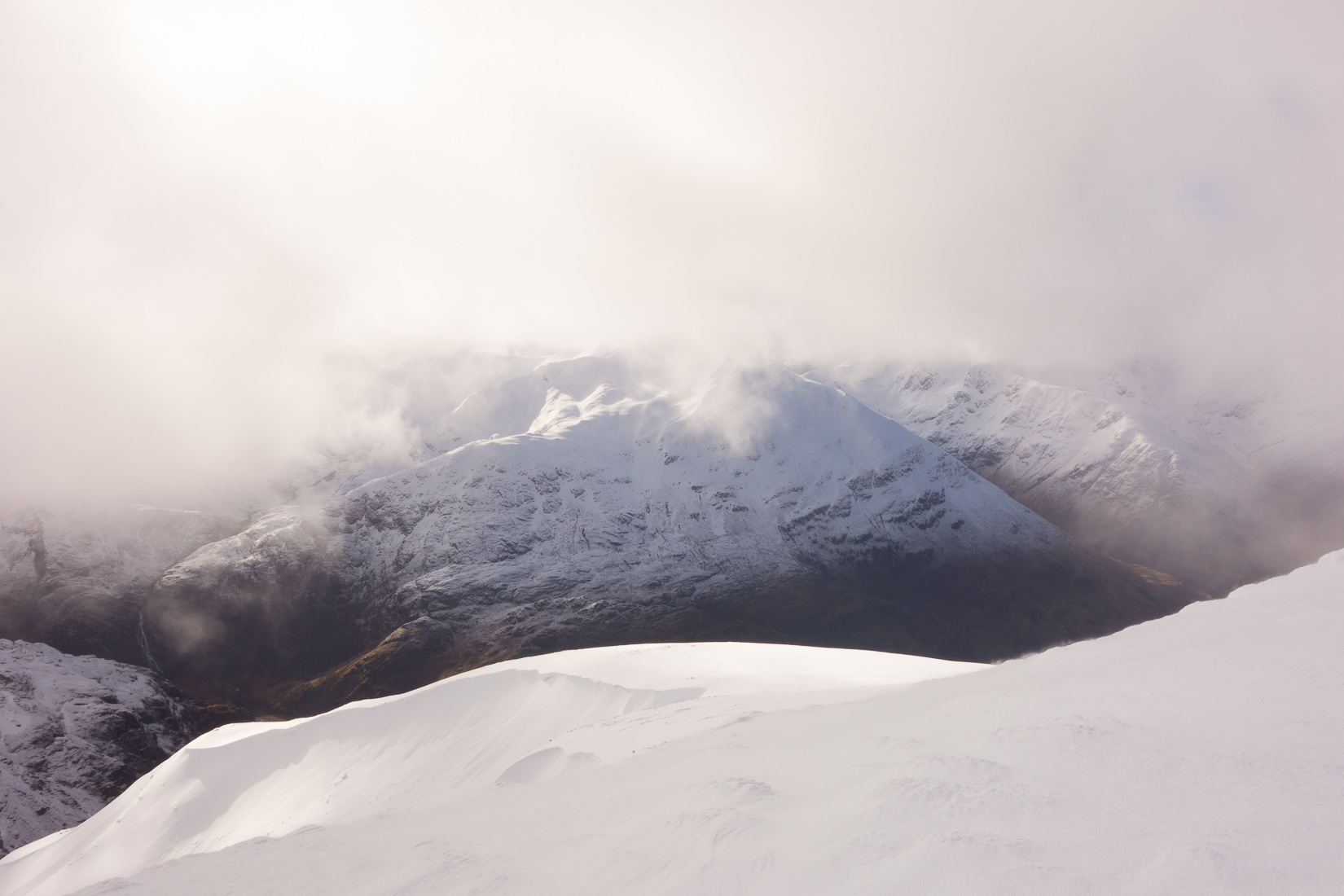 Is it going to clear… 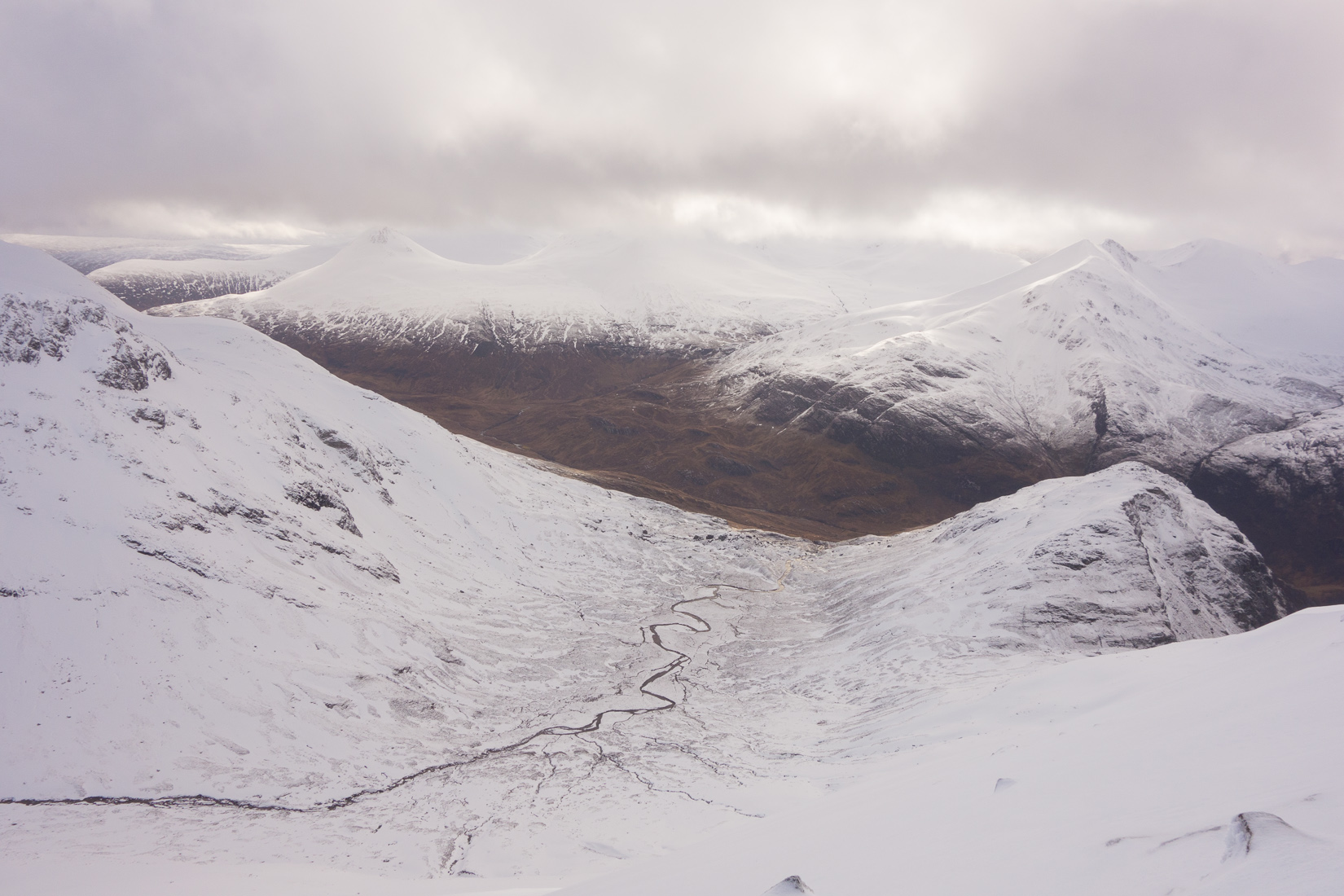 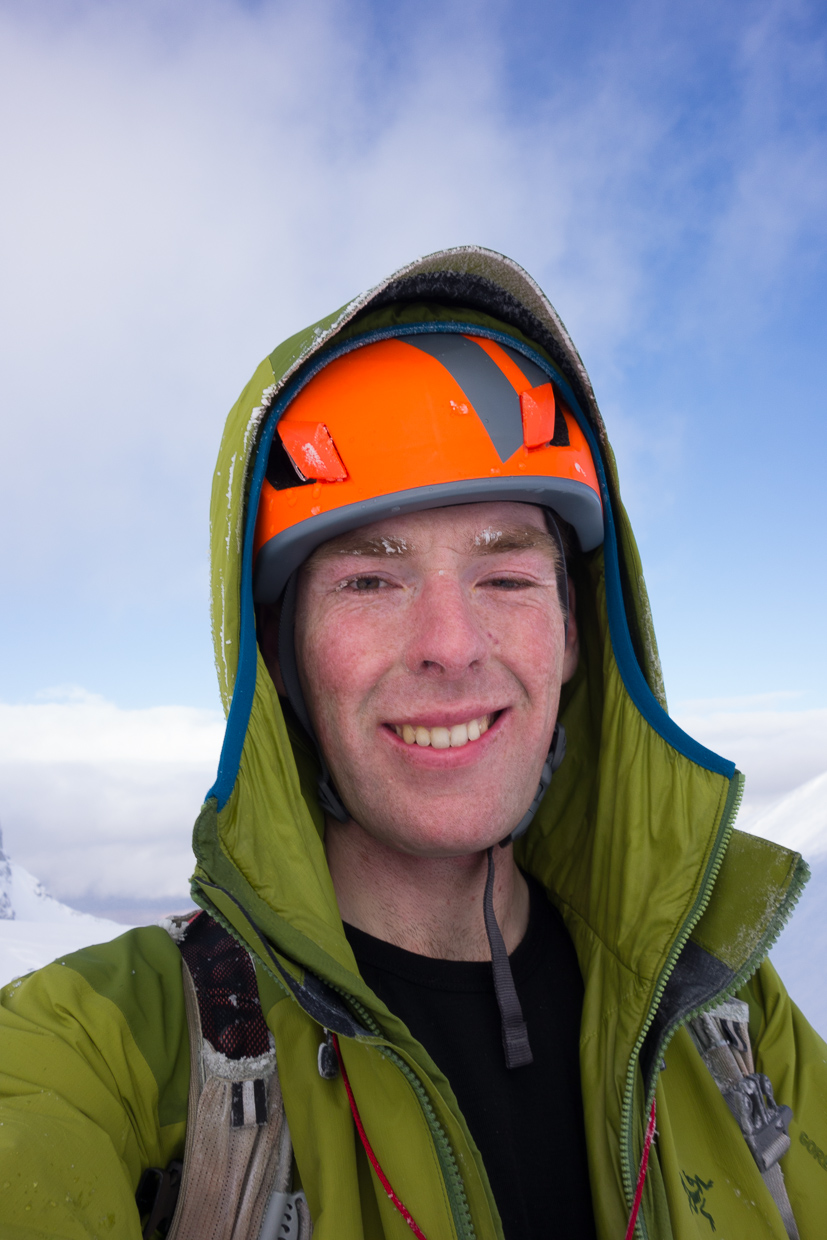 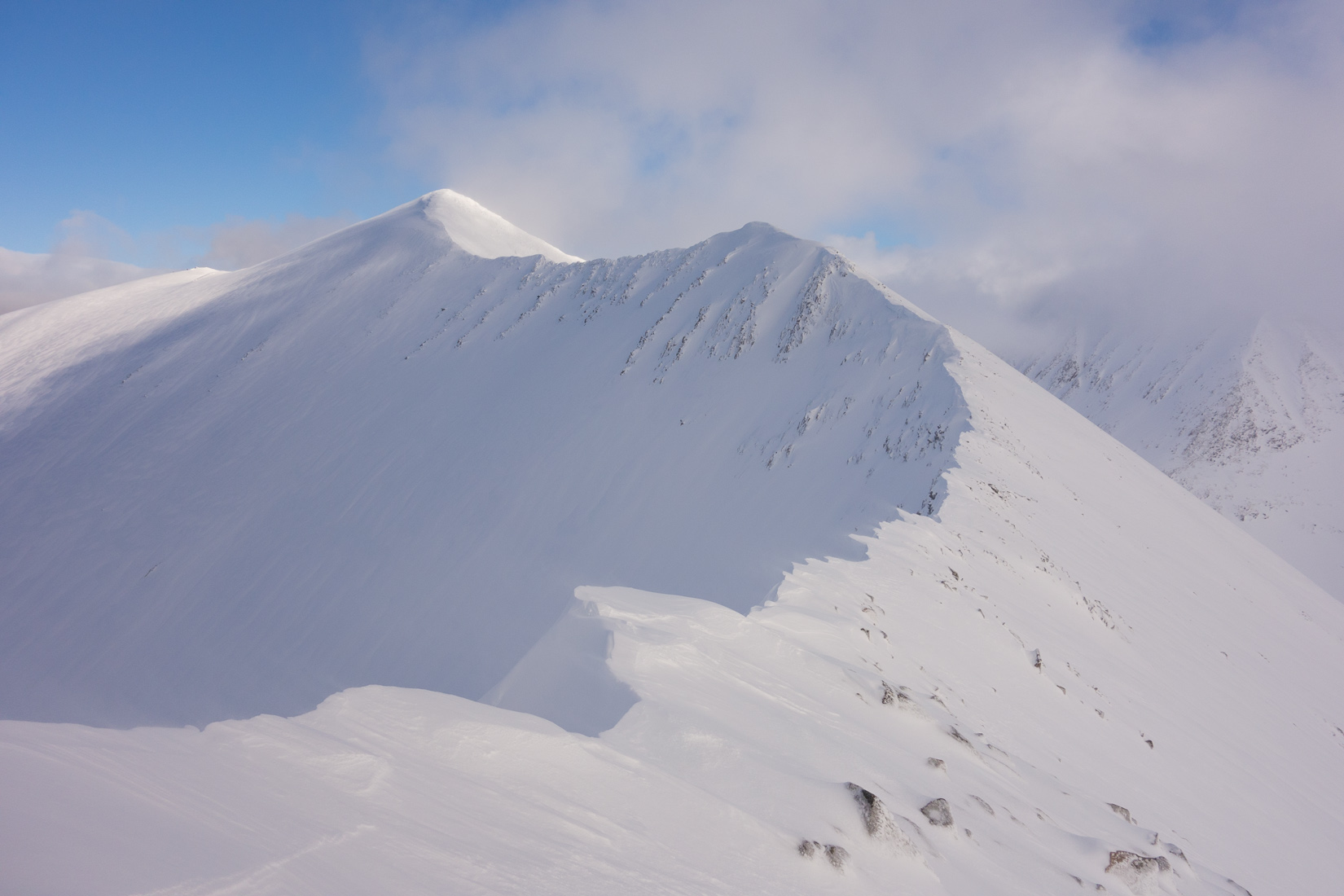 The Carn Mor Dearg Arete was in fantastic conditions, most of the snow along it was neve apart from a few sections with powder, although care was needed due to the cornices. Traversing the arete below the cloud base was just fantastic and I am so glad I made the decision to continue at the top of Ledge route as it would have been so easy just to descend down the Red Burn to the valley. I was soon at the summit of Carn Dearg Meadhonach where I met a few groups of people who seemed slightly bemused that I had already traversed the mountain, but were grateful for the conditions report. 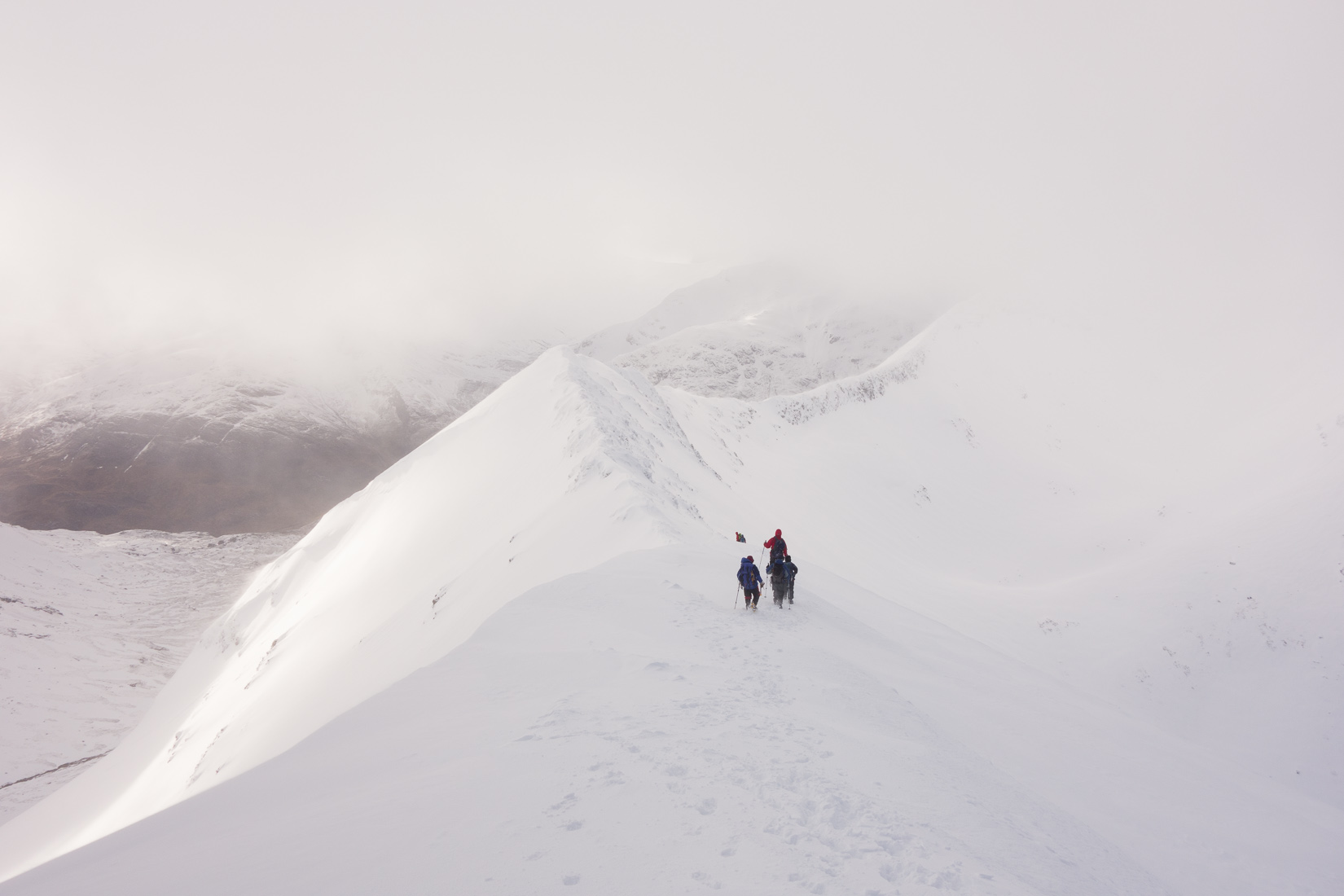 Another party heading to the CMD arete 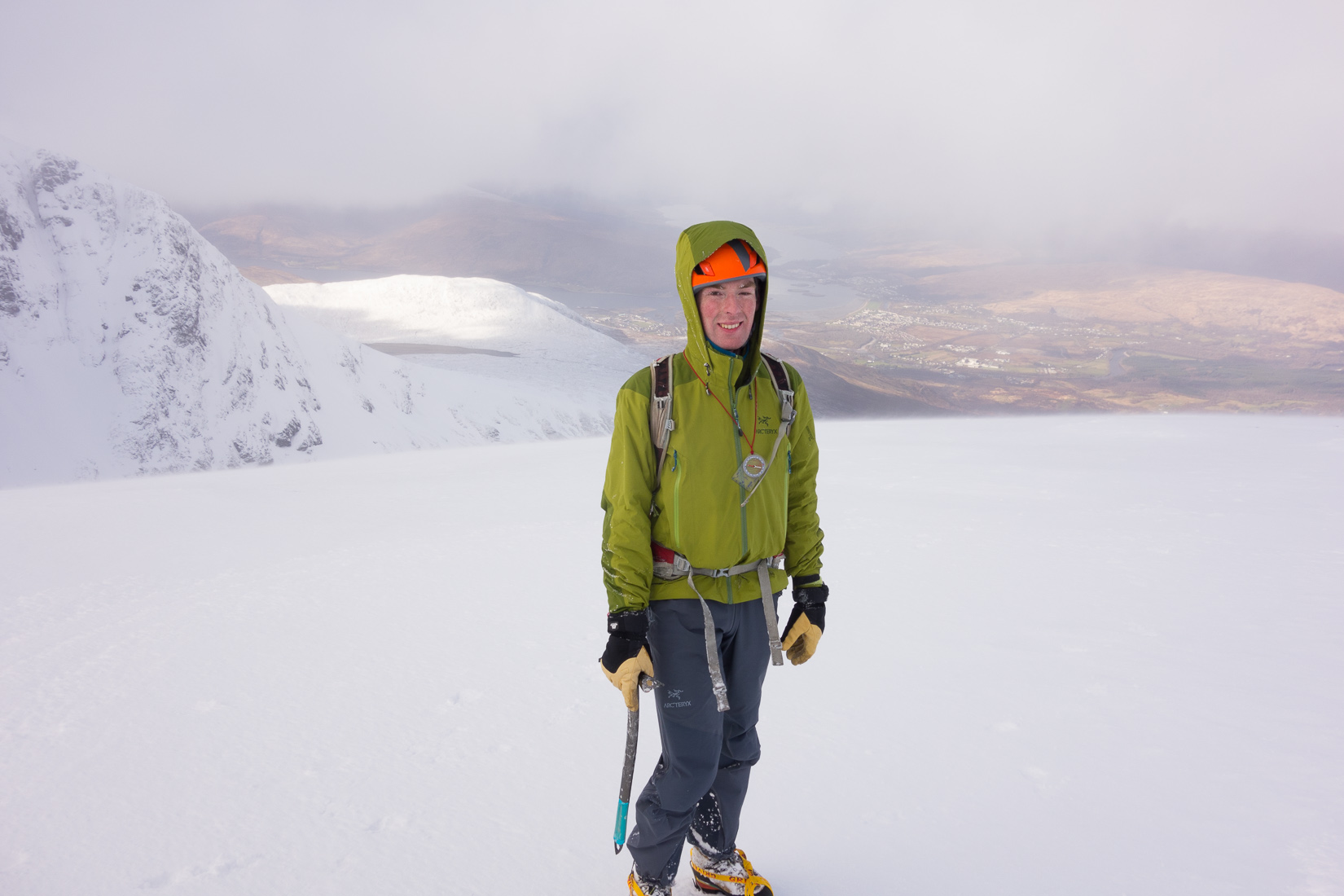 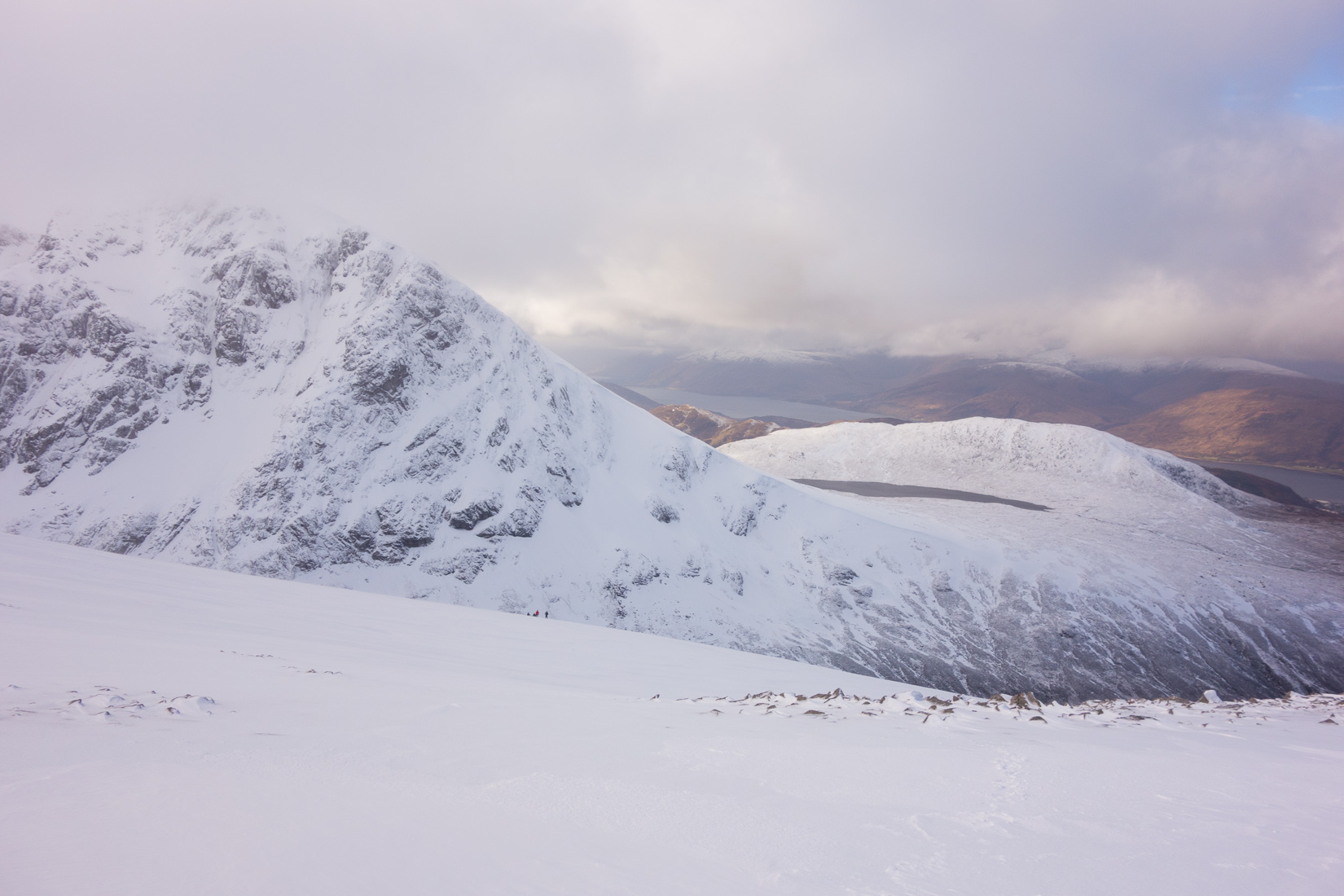 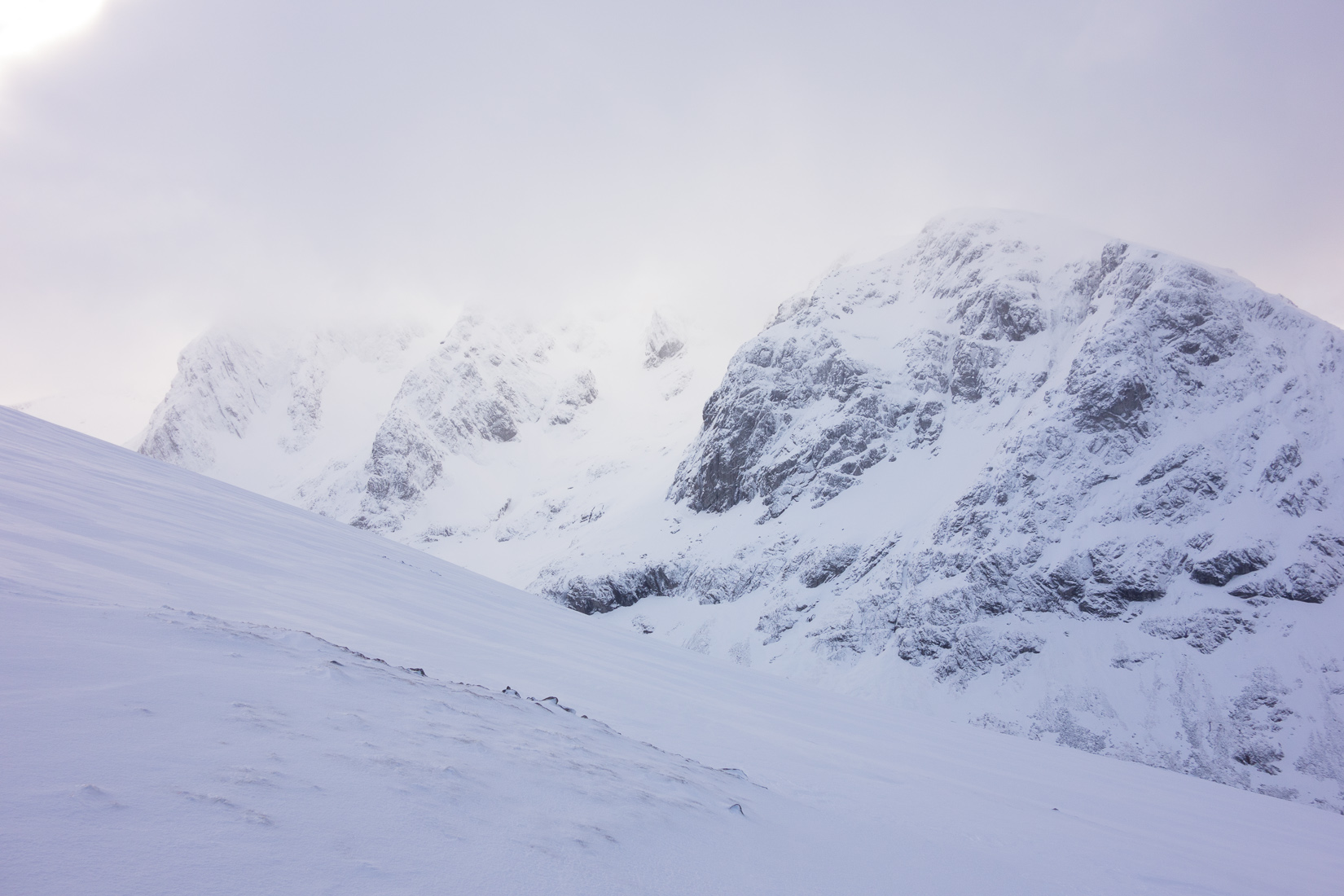 After a quick and easy descent I was back at the car 6.5 hours after I left, having had a fantastic days mountaineering with some proper Scottish weather including rain, snow, hill fog, white out, wind, cloud and sun. While I was descending I was thinking of if there is a better way of traversing Ben Nevis and I am struggling to think of one at the moment.