With the snowpack still not stable on north through east facing aspects and a good day of weather forecast we decided to head over to the west face of Aonach Mor to climb Golden Oldy.

It became clear in the morning that it wasn’t going to be as nice a day as forecast as the wind was pretty strong at the gondola station and it was snowing. The approach to Golden Oldy was really hard work due to deep snow with a murderous crust. By using the gps and a good set of directions we managed to find the start of Golden Oldy without any difficulty where we were met by three parties behind us and it was good to get some confirmation that we were at the base of the route.

I soloed the entire ridge while Richard and David moved together alpine style. The conditions on the ridge were fantastic with mostly helpful snow however the weather was awful with lots of wind, spindrift and hill fog. As we approached the snow aretes towards the top of the ridge there was no exposed rock which made protection hard to come by and there was lots of fresh snow around making everything feel slightly less secure on the aretes.

The climbing was great fun with good rock scrambling lower down with one tricky step, and then as we got higher the rock got buried which lead to some great fun snow aretes with plenty of exposure, especially when combined with the wind. It was a real shame that it was cloudy as the views would have been spectacular if there had been good views.

When we finished the route and topped out onto Aonach Mor we were assaulted by the wind, my rucksack almost blew away. We had some fun navigating back to the ski centre involving lots of pacing and following bearings and it was great to see the ski lifts, and then it was even better to see that the ski lifts were running as it meant that we would be able to get the gondola down. 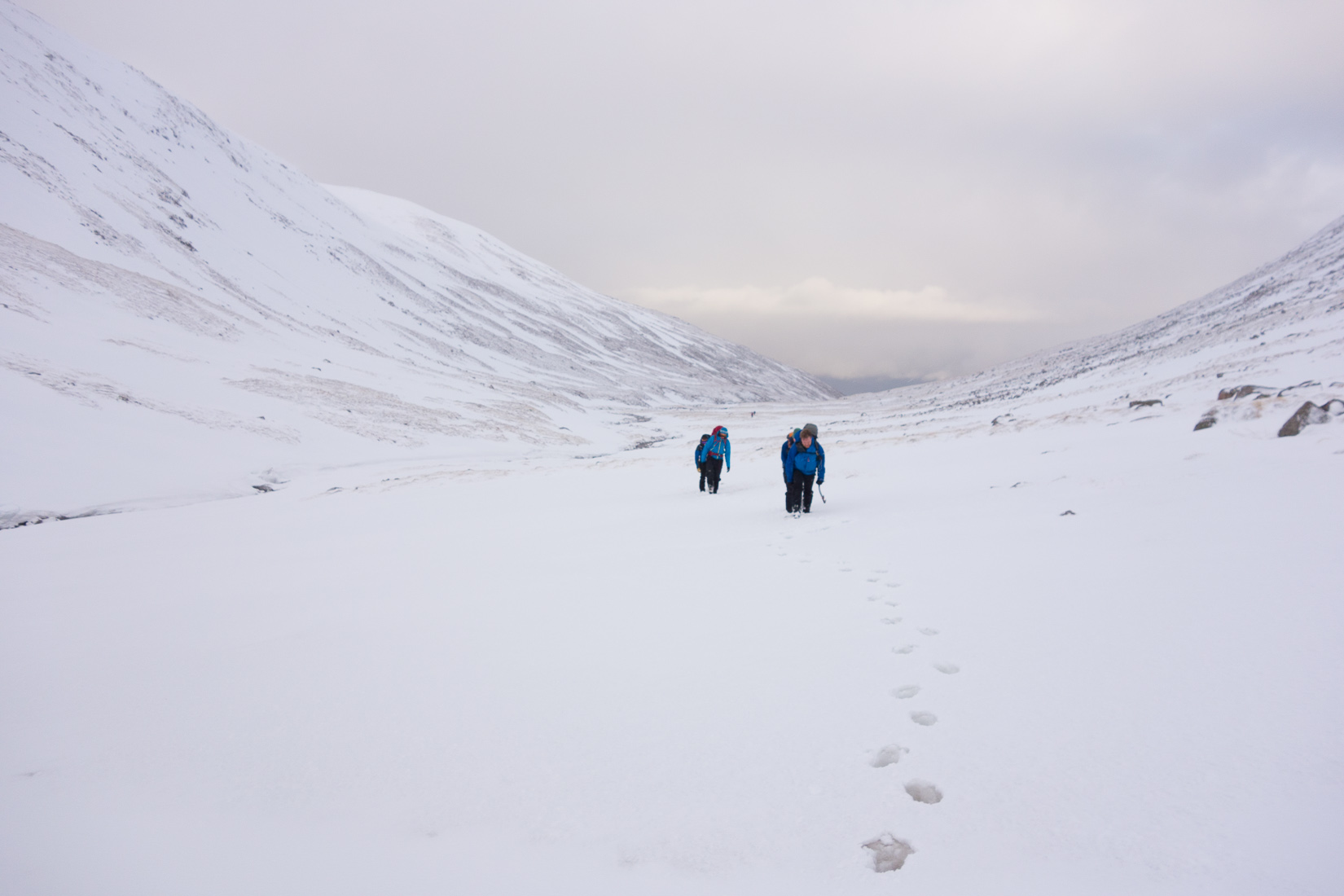 Hard going on the approach 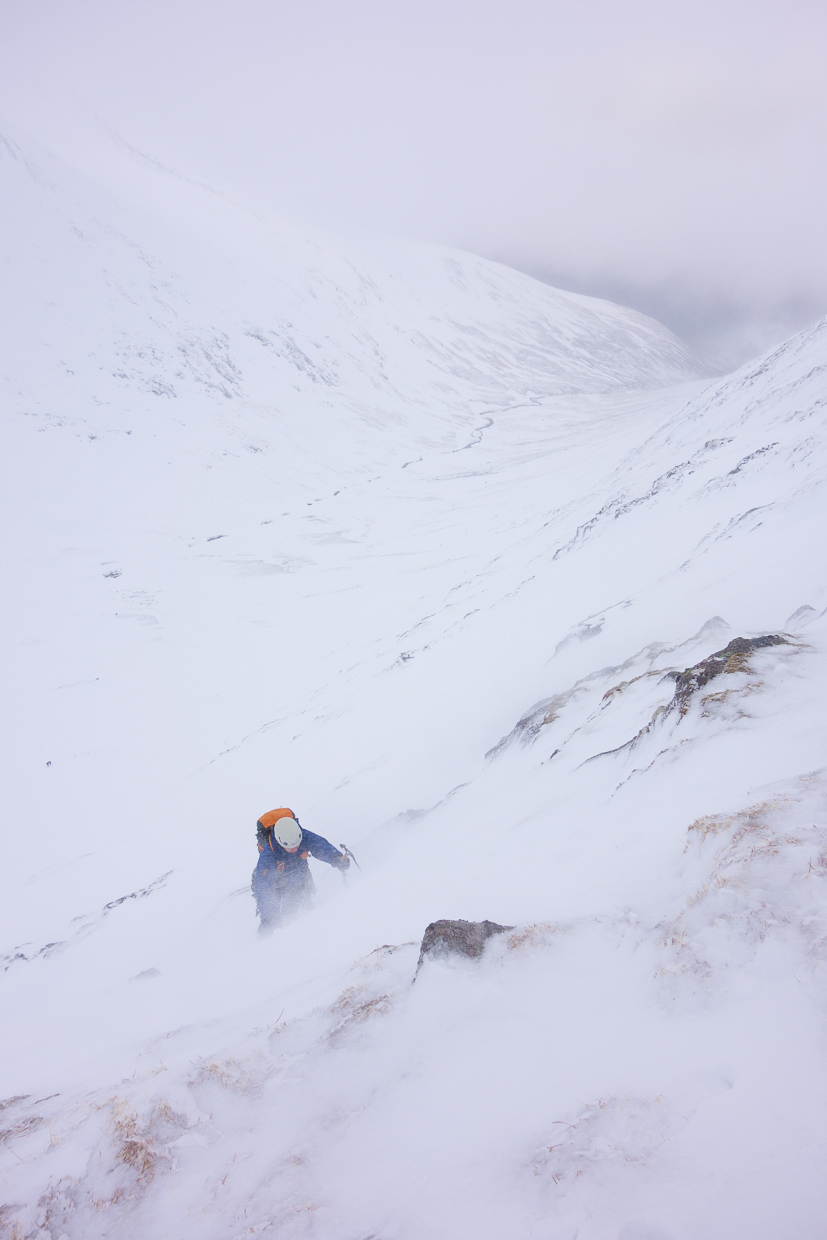 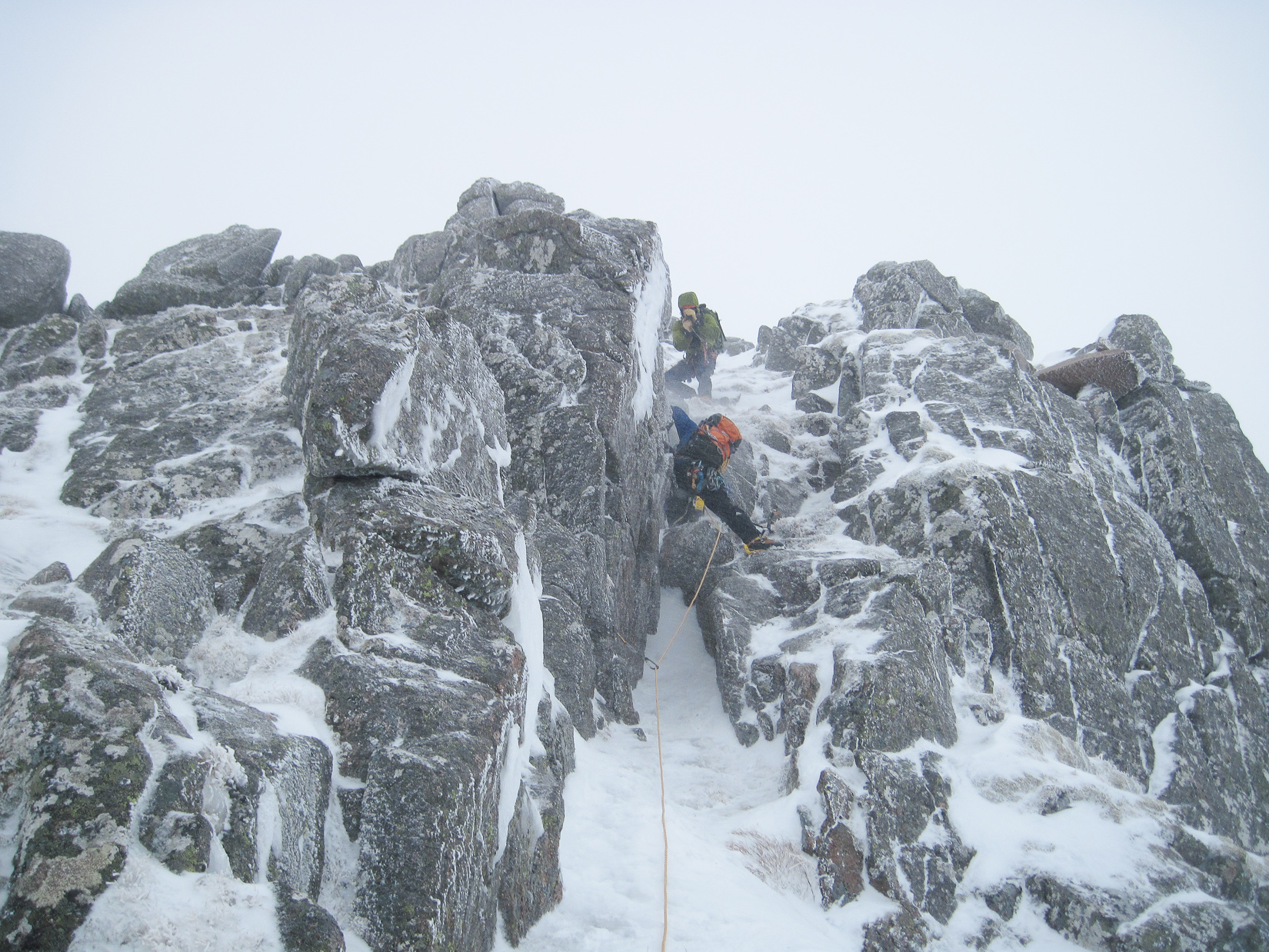 The crux from below 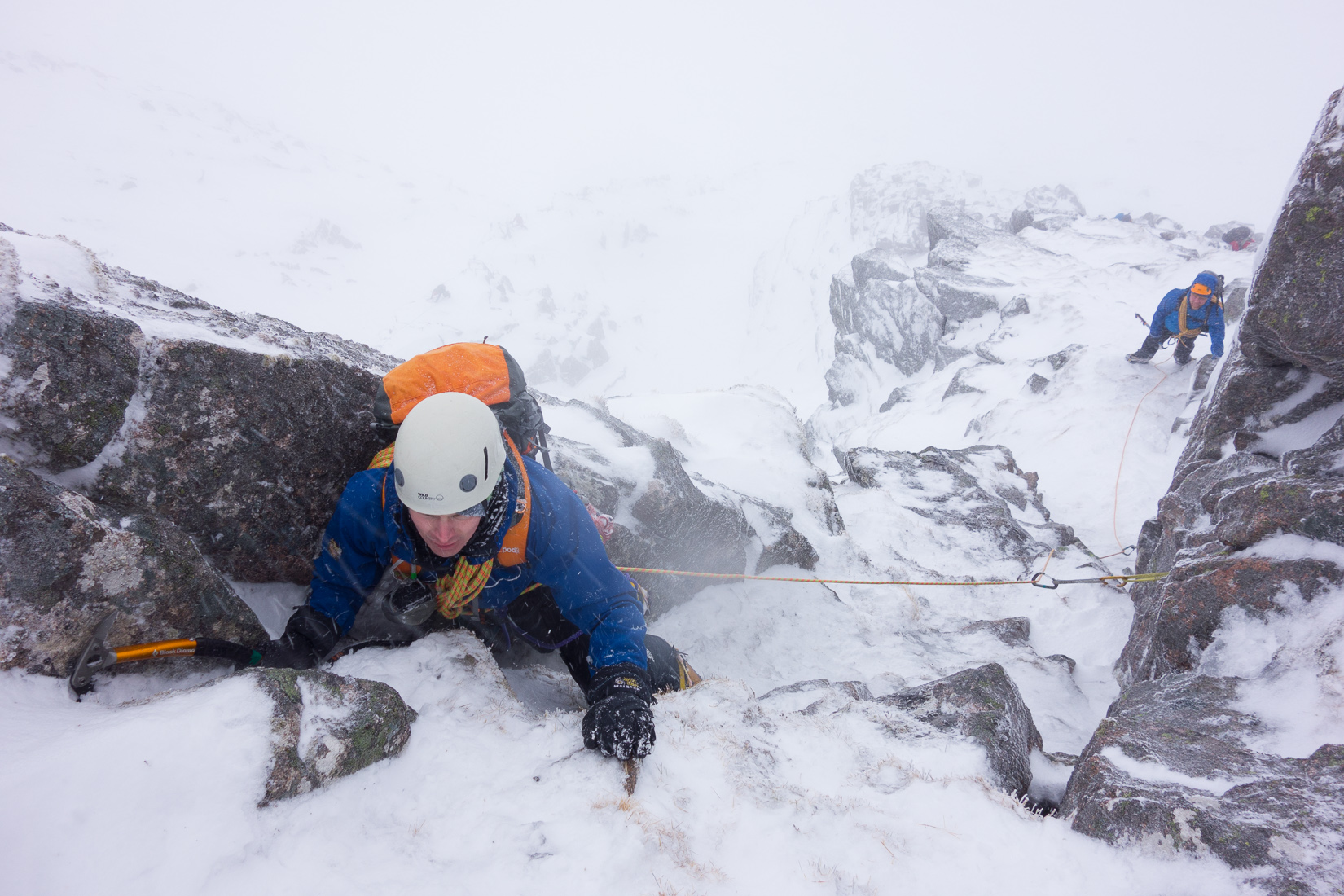 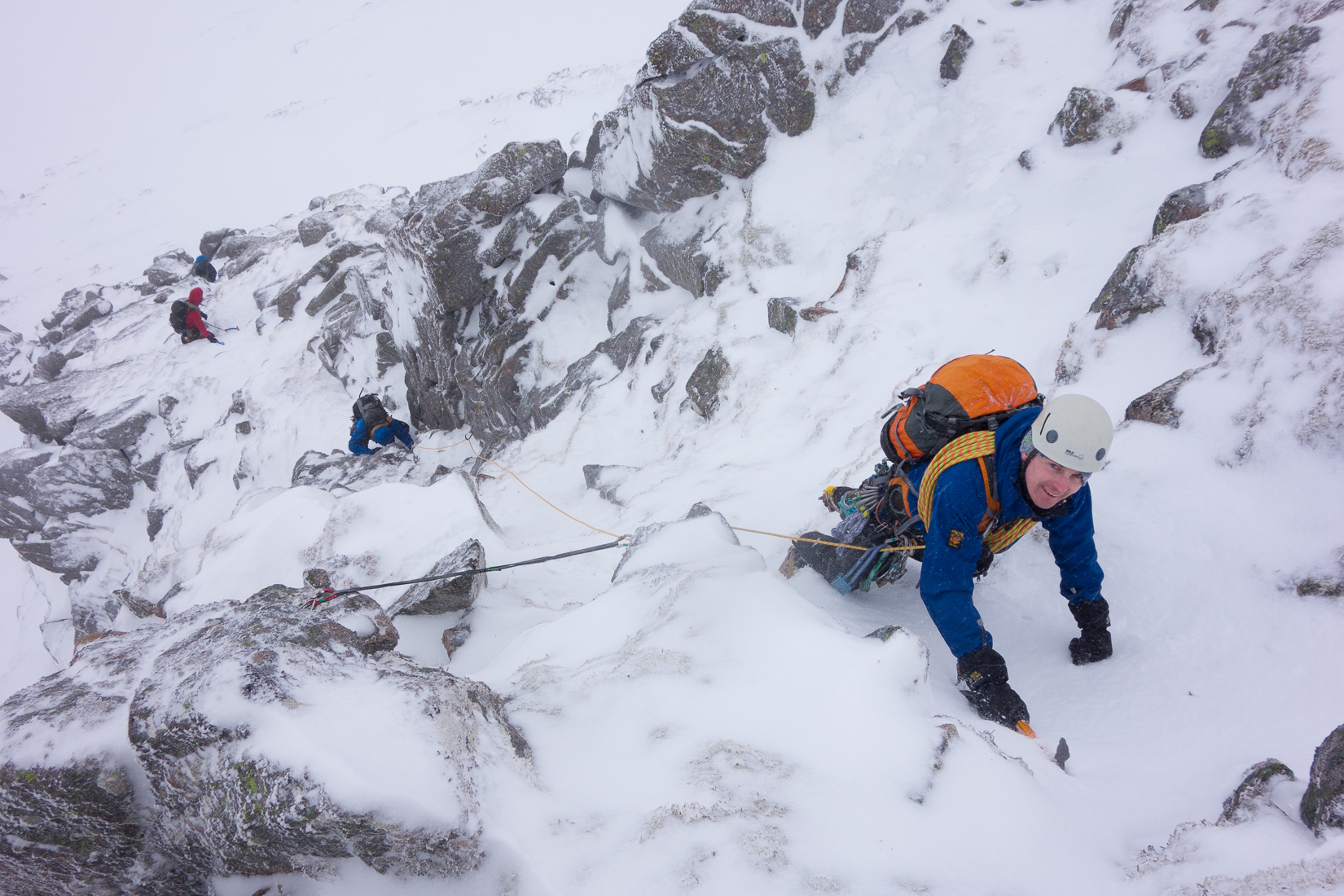 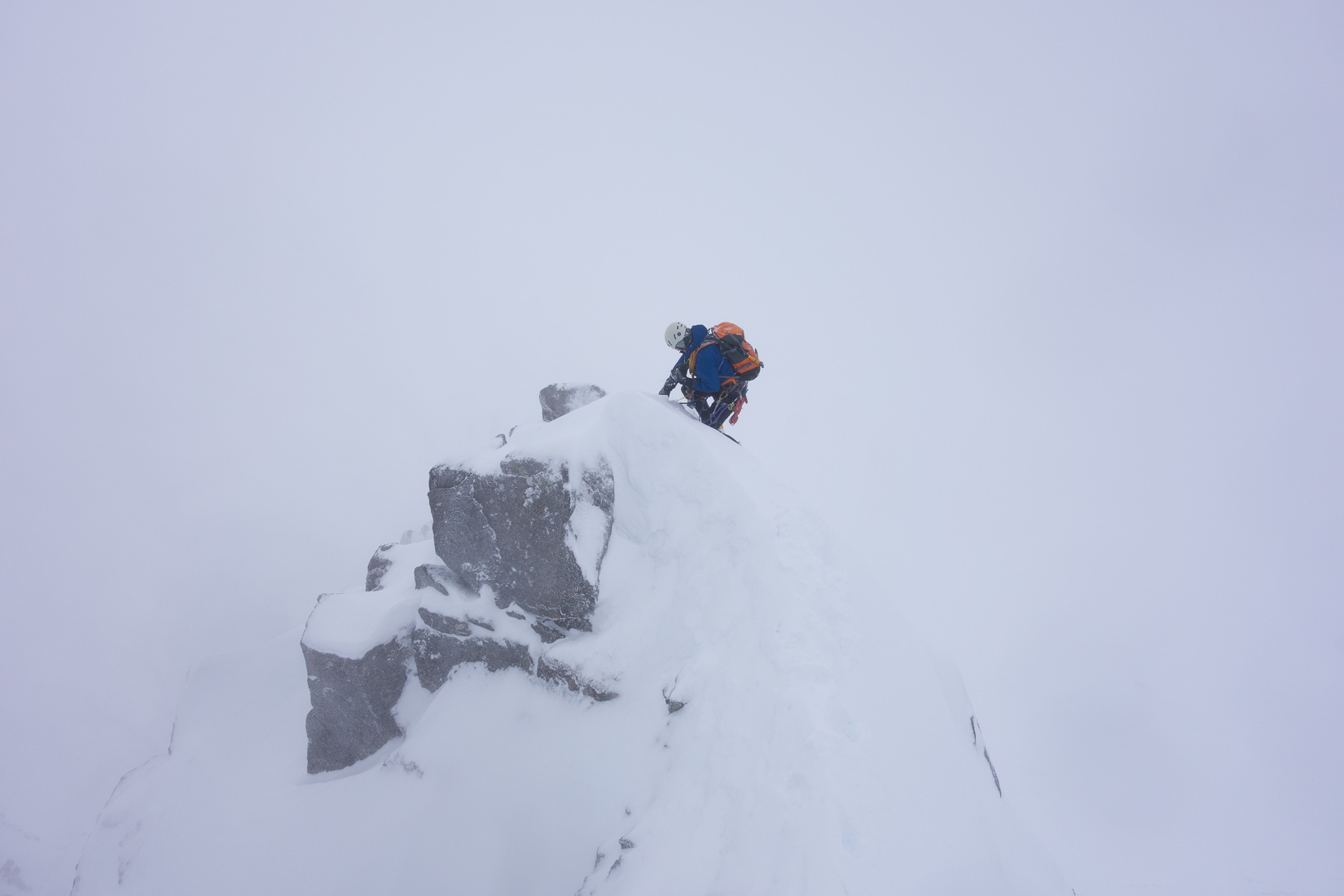 At the start of a narrow section 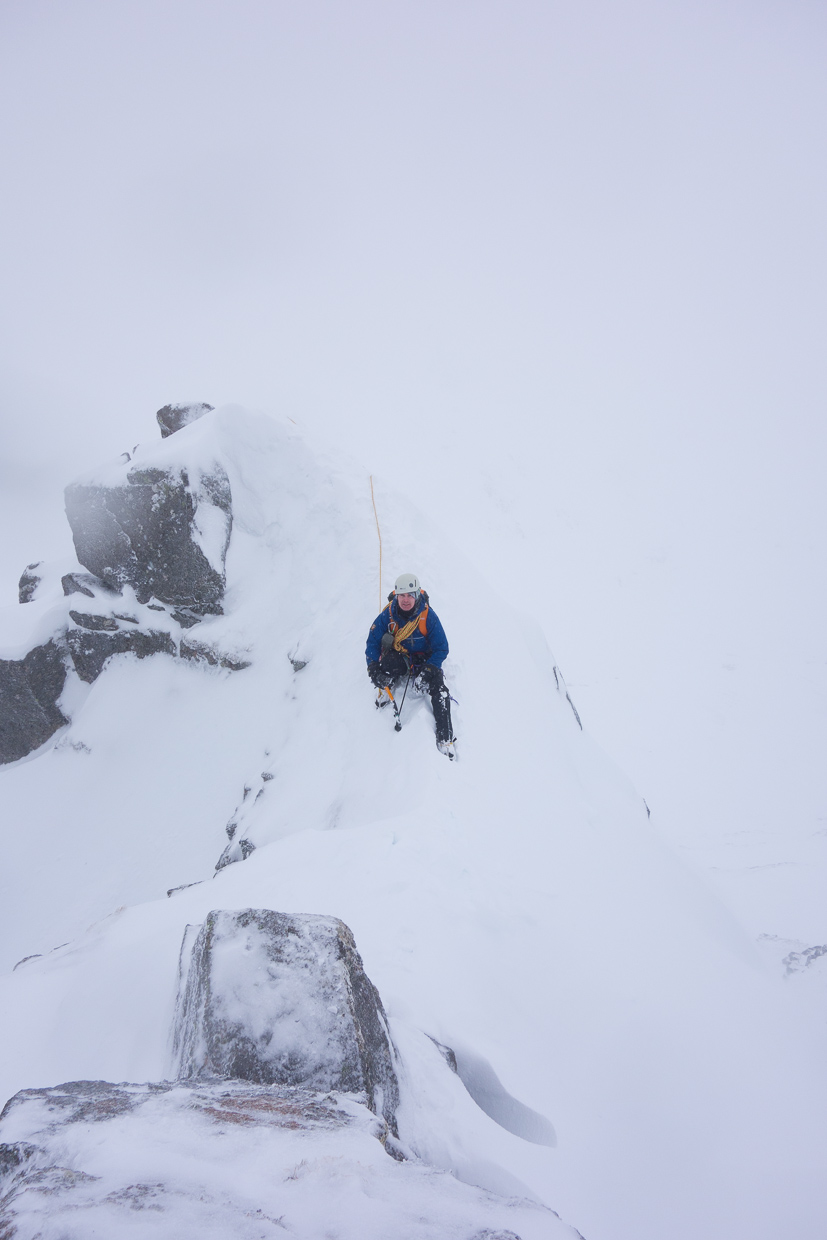 A Cheval on Golden Oldy 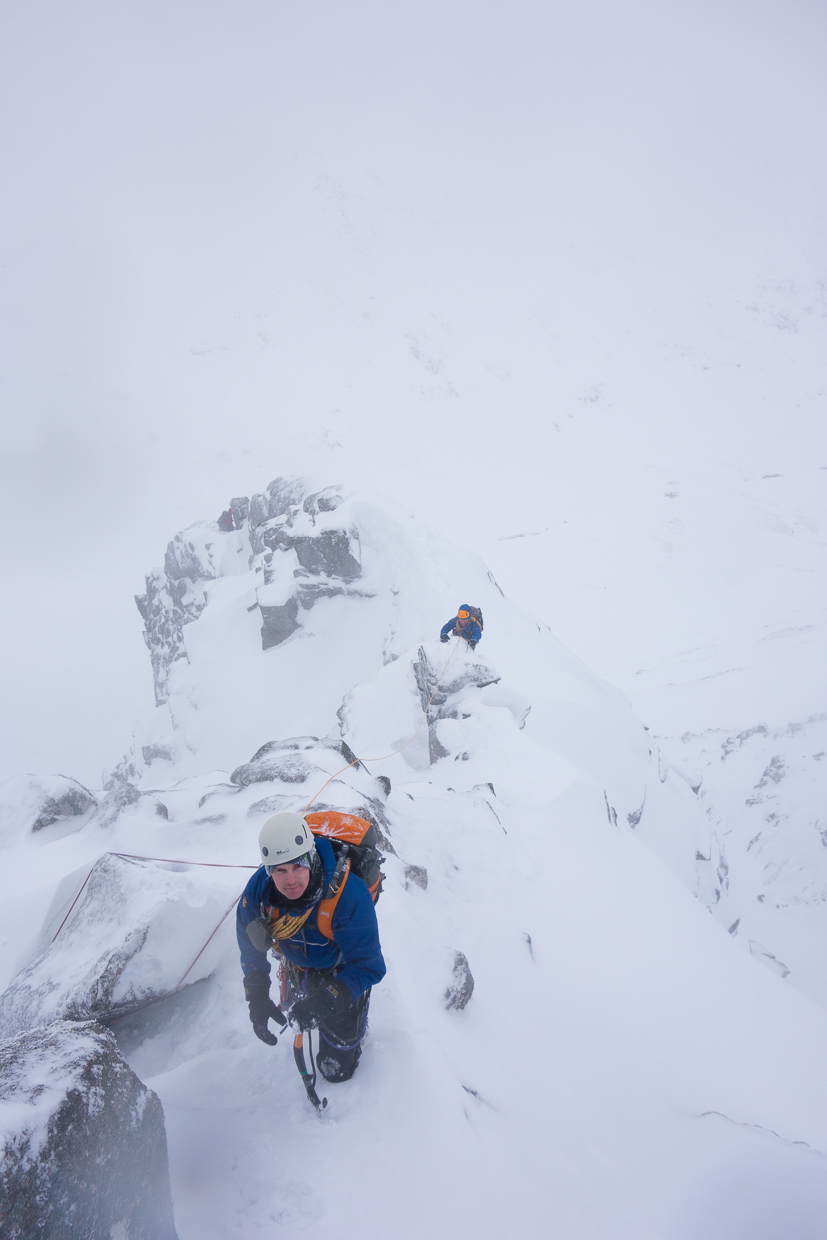 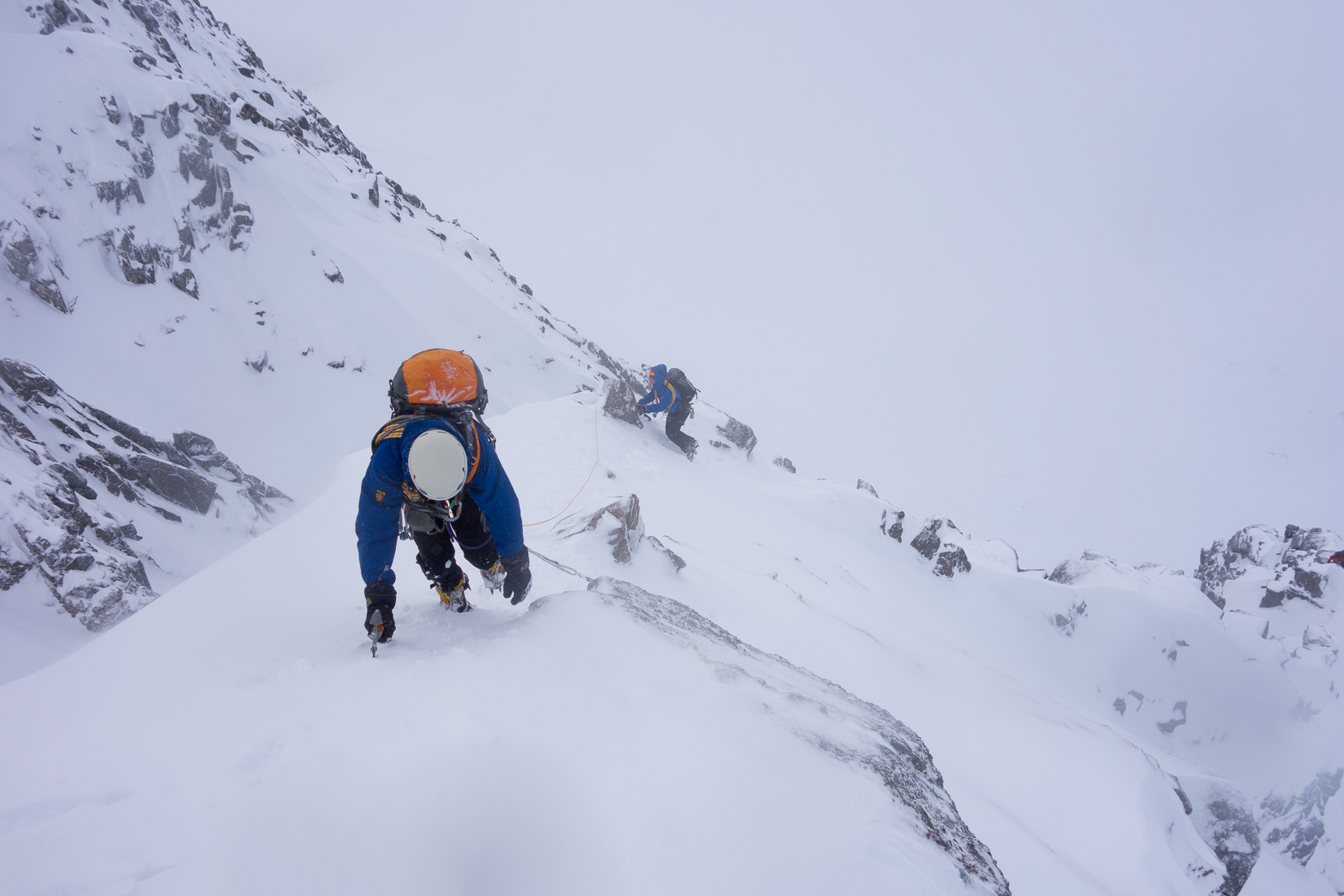 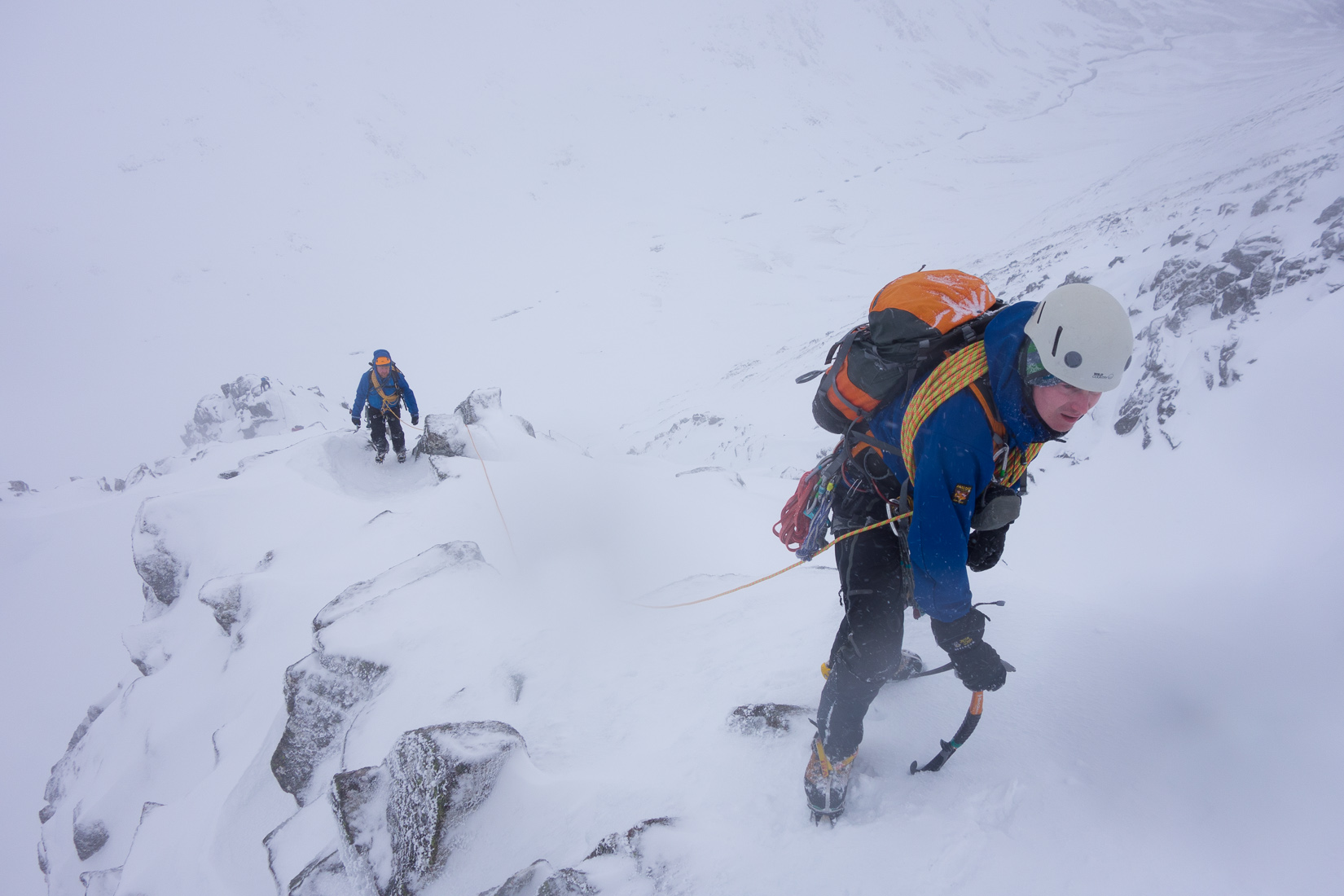 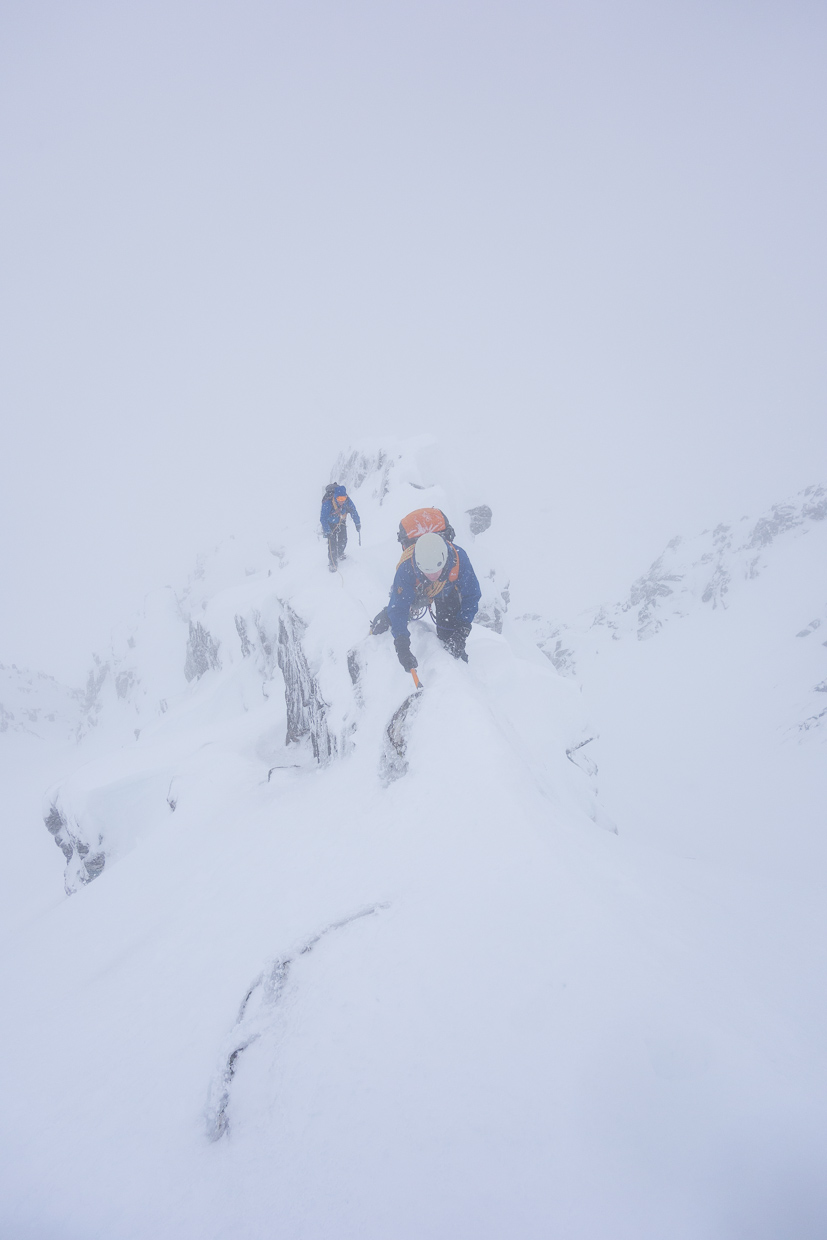