After yet another brilliant day on the Ben I still wasn’t going to give myself a rest day so on Sunday me, David and Rich for up for an alpine start and headed up to the North Face of Ben Nevis yet again with the plan to climb Hadrian’s Wall Direct, another classic *** V,5 ice climb.

I was coming down with a cold and found the walk in really touch, it has been a long time since I have struggled so much in the hills and pretty much collapsed on my bag when we stopped to gear up. Looking up towards Hadrian’s Wall and Point Five I remembered how tiring the initial snow slope was last time and with my current state of body was really not looking forward to it, thankfully half a packet of Jelly Babies helped significantly and we arrived at the bottom of the route without anyone in front of us.

Looking up from the bottom the ice looked absolutely fantastic, a long, very sustained but not too steep section of ice. There was a ledge around 7m up what looked like easy ground so we decided to solo up to it to make reaching a good belay easier, once we got on the ground it quickly became clear that it was much steeper than it looked and I slightly regretted the decision to solo it. Once me and David were at the belay we dropped a rope to Rich who climbed while David racked up, an advantage of climbing as a three is that it makes taking photos much easier due to not having to belay. Today I discovered another advantage, if you make yourself a seat then you can fall asleep if you feel rough which I used to good effect and certainly felt better after a short snooze.

Pretty much a full 60m pitch of climbing took David off the steep ground and up to good ice to setup a belay, however as me and Rich were on an ice screw belay using two screws and five had been used on the climb as it was such a long section of steep ice, all that was left for the belay was a single 19cm ice screw, a bulldog and two ice axes which were all equalised. This made me realise that for any routes which rely on ice screw belays you really need more than eight ice screws as putting five pieces of gear in over 60m leads to some very bold climbing. 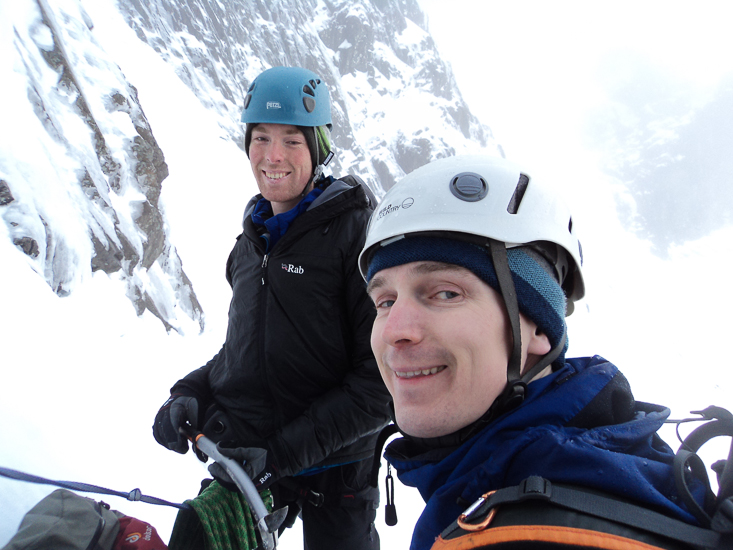 Happy on the first belay 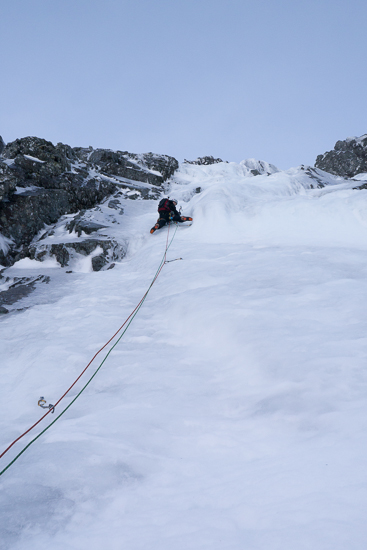 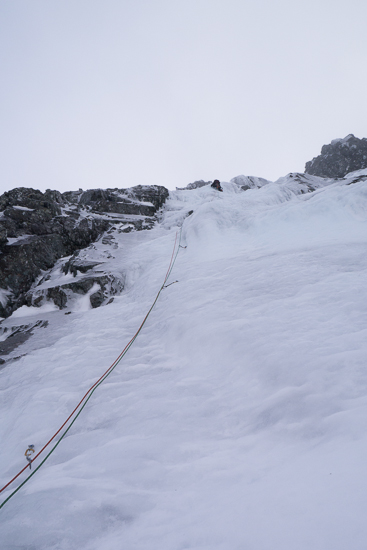 Near the top of the first pitch 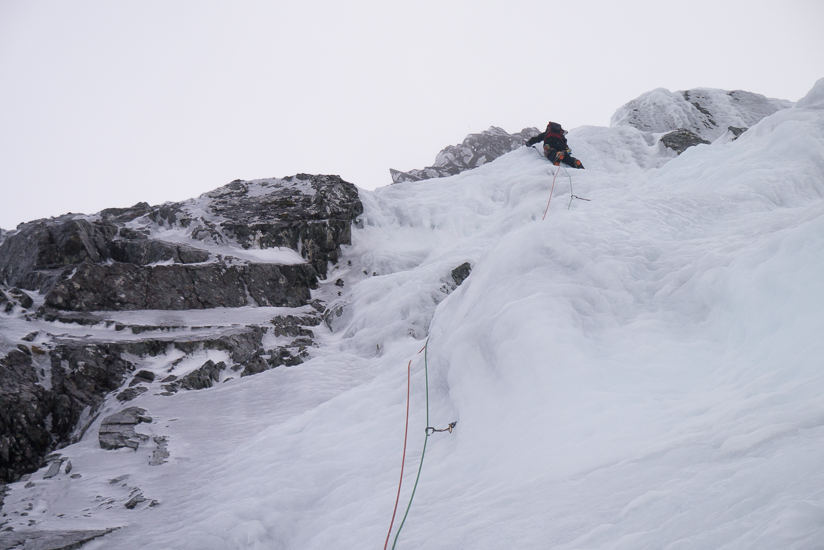 Eventually the belay was setup and it was time for me and Rich to climb, the pitch was absolutely fantastic with the climbing up perfect ice, without any hooks until the last section due to the ice being so wide there were many different lines. I tried to chose the steepest line that I could due to the ice being fantastic, as it turned out did David despite being desperately run out while climbing. All too quickly I was at the first belay feeling very jealous that I didn’t get to lead it, but I can’t complain as I had the better pitches yesterday.

Once we were all at the belay I set off a quickly as possible so that I didn’t end up behind the party which were climbing parallel to us (after asking if it was ok with us) and headed up the corner pitch which was good but straightforward climbing, this lead to the start of a snowfield which I assumed would lead us all the way to the top. 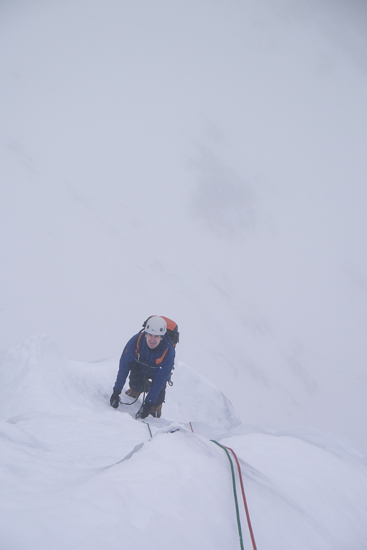 Approaching the top of the second pitch 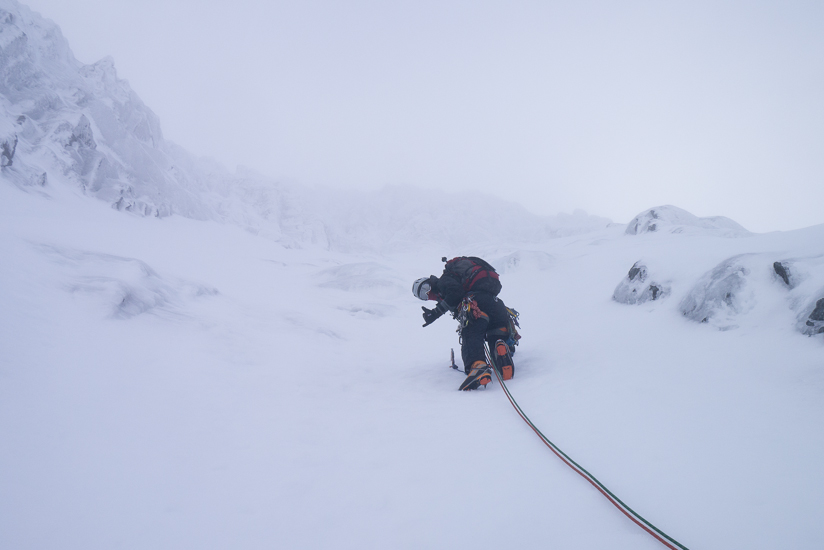 Heading off up the snow slope

After two more pitches up the snow field we arrived below the final head wall which looked fantastic and was very unexpected, even better for me was that it was my turn to lead. I set off expecting it to be thin ice with some mixed climbing but it turned out that the ice was really thick and the climbing was really fun. After most of a rope length I arrived at some good ice for ice screws so setup the final belay and the others climbed up to me. 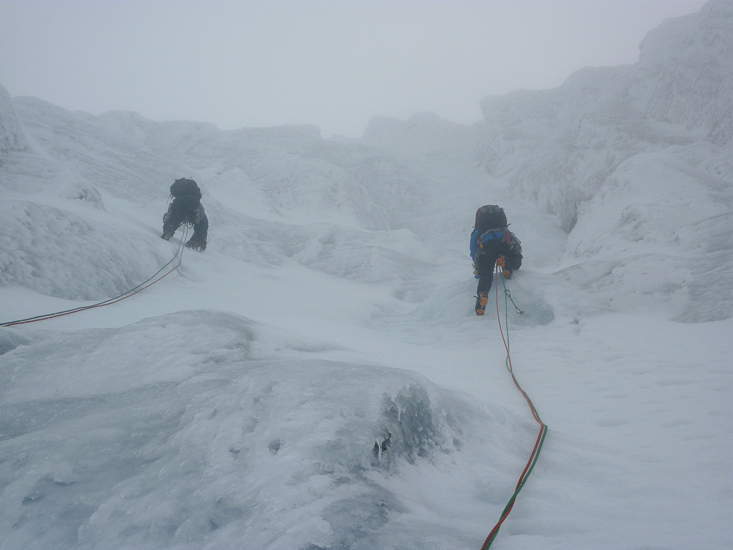 Leading in parallel up the final pitches 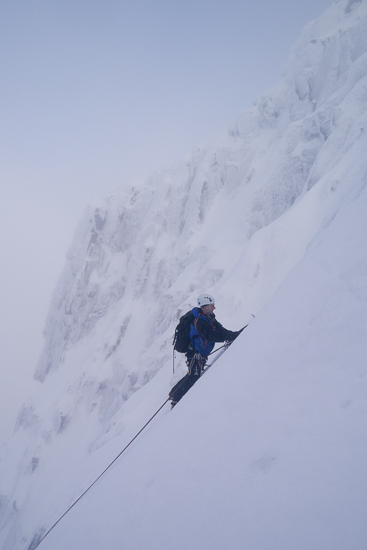 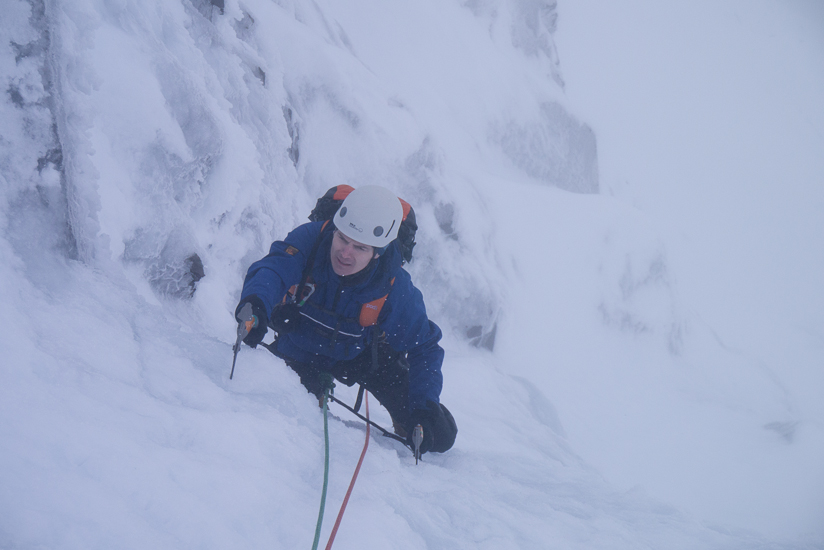 Great ice at the end 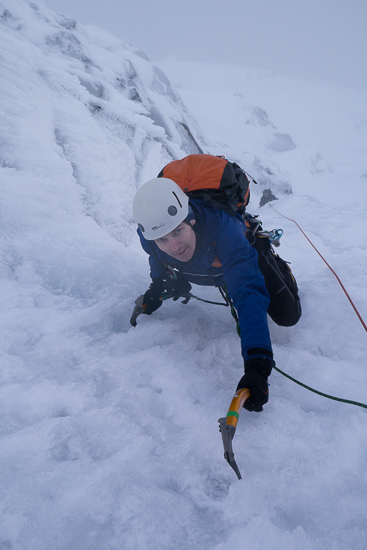 Near the top of the penultimate pitch 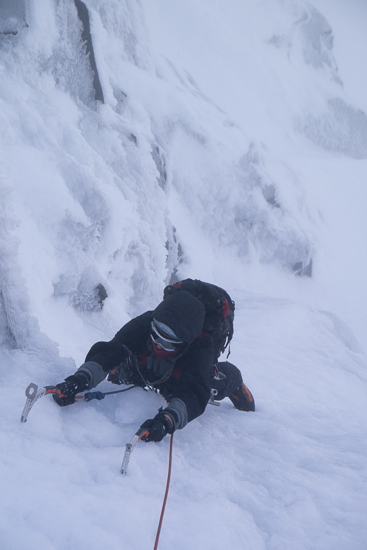 After some persuasion Rich set off leading the final 20m up a corner to the top out which again was another section of fun climbing. We arrived at the top in good time, especially as we were climbing as a three using the same technique that I used on Orion Face for alternating leads which seems to work really well. Without wasting any time at the summit we headed down Number Four gully (yet again…) but this time after the initial steep section it was really easy going with soft snow which you could almost ski down in crampons and then lower down the snow was soft enough to glissade which meant that very quickly we were down in the coire. 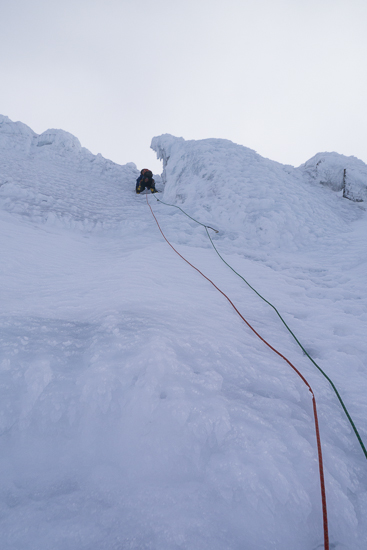 After the tedious walk back out from the CIC hut for the sixth time in 1.5 weeks we arrived back at the car very happy but also very tired. This will probably be my last route of the season due to actually having to do some work now and needing to let my body recover. It has been a brilliant season which I am not sure how I will ever beat with three routes climbed in North Wales, four routes climbed in South Wales and fifteen climbed in Scotland, four of which were classic grade V lines on the Ben with brilliant alpine conditions for 3 of the classic routes on the Ben.