Attempting Minus One Gully then Climbing Vanishing Gully

Another week finished at work, in fact my first full week since January due to all my Scotland trips in February and instead of enjoying a nice relaxing weekend it was back in the car for another eight hour drive up to Fort William for a weekends winter climbing. This trip was with James and was a fairly last minute trip due to the weather down south being to wet and cold to go rock climbing.
We rolled into the North Face car park at 1:30am, set the alarm for 4:30 and headed to bed. Very tired after three hours sleep we woke up, had some breakfast and coffee before starting the now very familiar walk up to the CIC hut. Despite being pretty tired it was the most enjoyable walk in I have done so far due to the weather being so Alpine with a clear sky, the Ben looking like an iced christmas cake and a fantastic view of the mountains behind us. We were soon at the CIC hut after 1h15mins and started the hard walk in up the fresh powder towards the minus face. Despite being at the CIC hut at 6:30 there was a stream of people ahead of us, and there seemed to be an entire campsite next to the CIC hut! Thankfully only one other party headed towards Minus One Gully and with the deep snow we were very appreciative of the trail breaking. 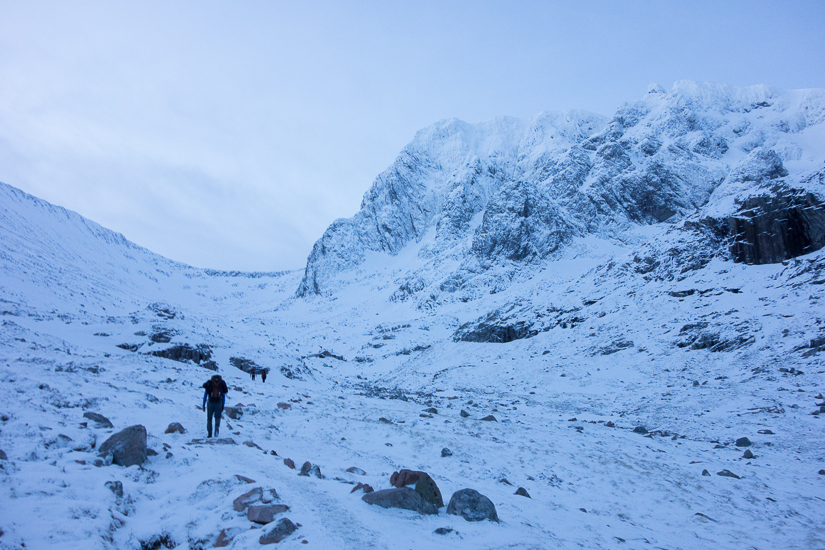 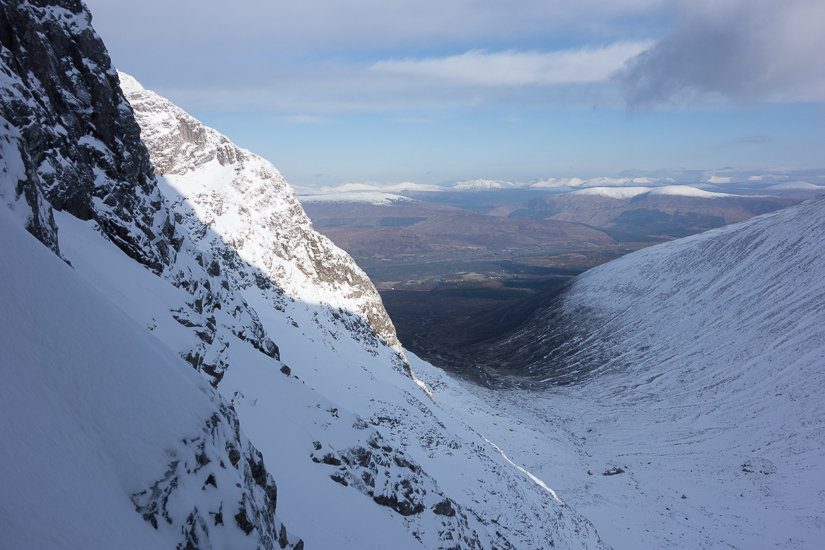 Minus One Gully is graded at VI, 6 so I knew it would be hard but after my winter so far I did not think I was over reaching myself having climbed a number of major grade V lines without too much difficulty. After a long wait at the first belay for the party in front of us James headed off up the first pitch to belay just below the overhanging crux pitch, after another wait for the belay to become free it was time for me to start climbing. As soon as I started climbing the initial section of ice I got bombarded with what seemed like a never ending amount of spindrift, thankfully it ended and I was soon at the belay looking at a very thin crux pitch.

Nervously I started climbing with thin axe placements, and almost no existent feet placements I headed up. I was struggling looking for placements, axe constantly hitting rock as there was no thick ice, after a big move up on a tiny hook I found a good placement, phew! However before I could place a screw my right foot popped off a tiny placement which caused me to barn door into my first fall on ice, leaving one axe in the ice and the other in the snow below me. Hanging in free space at the same height as my belayer, slightly shaken up I was lowed down to my axe and climbed back up for a second attempt. Using James’ axe for the first few meters before dropping it down to him I reached my axe, I placed another screw which unlike the previous one was actually good which I then slumped onto while pumped and had a rest before my final attempt.

Determined I started climbing again, another massive move up on a thin placement before reaching up and thankfully finding good ice, another move on good ice and I was able to bridge and take some of the weight off my arms while terrified I placed an awful screw. Once this was in I placed another screw to my left in brilliant ice which gave me the confidence to continue up the final few moves. The ice was starting to improve, however I couldn’t see the ice I was using due to the amount of powder covering the placements, I found a good placement with my right axe, moved up with my left axe and found what I thought was a good placement and started edging my feet up. Then I felt my left axe rip, oh shit! My right arm was fully bent when my axe ripped so by the time it was straight there was no chance of my holding onto my axe, I felt the crap screw rip and hit my helmet and again ended up hanging in free space at the same height as James. At this point I was drained, had taken two falls on ice and got away with it so we decided to call it a day while we were both still in one piece, James climbed up to the top piece of gear on a top rope, flicked my axe down the gully before creating a v-thread and retrieving the gear. After an abseil we were at the bottom of the gully where I retrieved my axe and we starting heading back to the CIC hut. 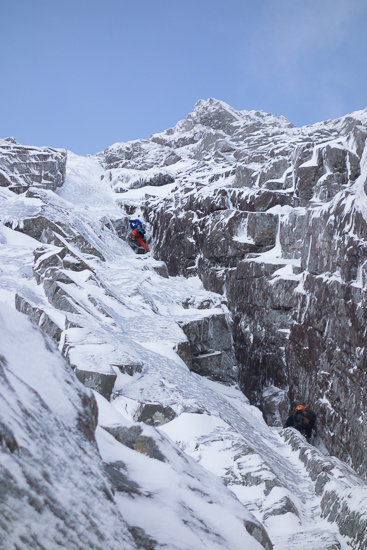 James on P1 and the party in front on P2 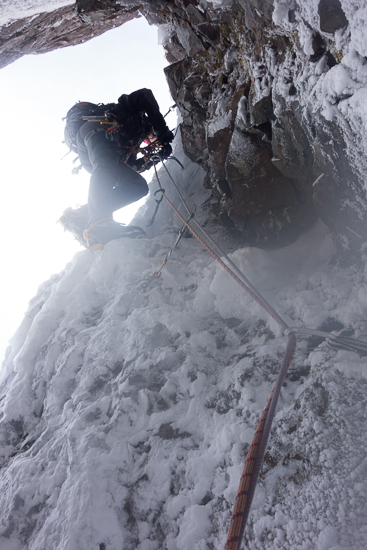 On the way to the CIC hut I suggested we head to a low down and short ice route as it was still only midday, so we headed to vanishing gully which looked like it was busy but as we were late the other climbers were just clearing the route which meant we had no queuing. The ice at the start of the first pitch was pretty cruddy but it soon improved and I enjoyed a great pitch of climbing on good thick ice which after Minus One was very appreciated. While James was climbing up loads of spindrift came down the gully and over my head as the belay was in an ice cave, and I was happy that it didn’t come down while I was climbing. 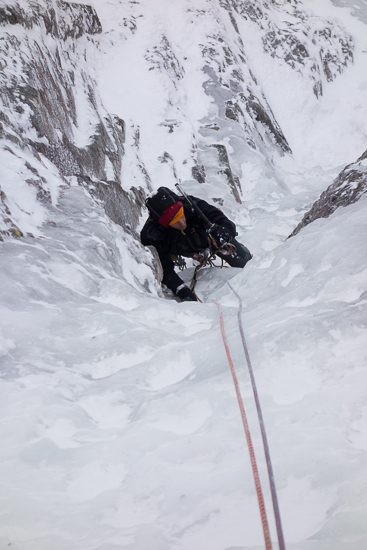 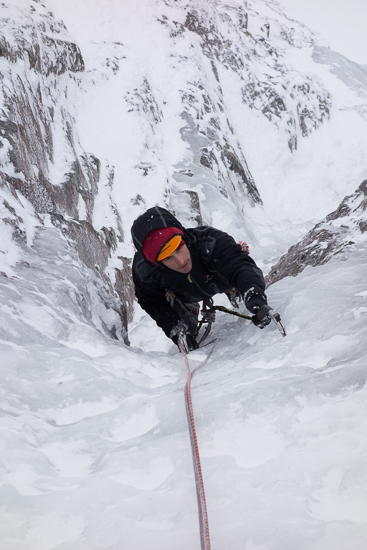 After swapping gear James moved onto the start of the second (crux) pitch and decided he didn’t have enough left in his arms to lead it so passed the gear back and I headed up, it was surprisingly steep and great climbing. By the time I was at the end of the steep section my arms were pretty tired having given so much in my attempt at Minus One. As I moved up the final section of ice I also moved into the wind which was picking up. This meant I had a rather chilly belay due to my belay jacket being in my rucksack near the CIC hut, once James arrived we quickly rigged up an abseil and headed back down the gully.

On the second abseil down the first pitch again we got dumped on with spindrift as can be seen in the photos and videos below, after quick walk we were back at the CIC hut and instead of removing gear as I normally do when I get back to the hut we both put on extra clothes and goggles to hide from the brutal Scottish weather which was getting worse rapidly. Eventually we arrived back at the car after a long day and headed to the pub for a well deserved meal and pint. 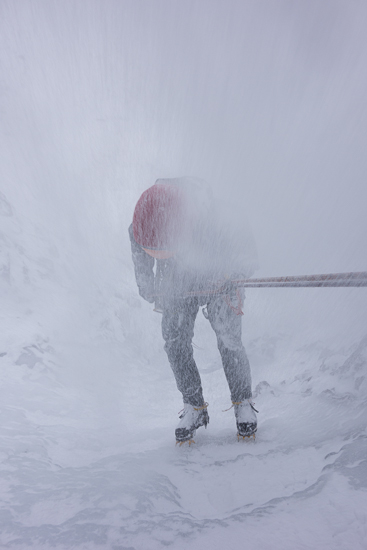 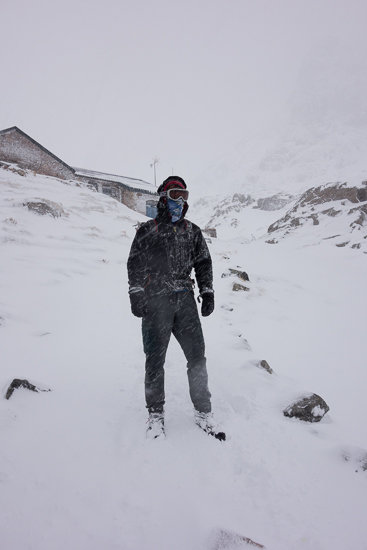 Scottish weather on the walk out

I feel very lucky to have got away with falling on ice, it is good to know that screws hold if they are in good ice and I chose a good route to take a fall on as it was so overhanging I fell into free space which meant my that the risk of breaking ankles was reduced. I know I was lucky and falling on ice isn’t something I plan on making a habit of and I am just glad that we both walked away from the experienced uninjured and still managed to get a good route done.

2 Responses to “Attempting Minus One Gully then Climbing Vanishing Gully”