Late on Friday night David arrived up from Derby which meant that I had a climbing partner keen to get on a grade V ice route, so we set our alarms for 4:30 with a plan on walking into the Ben and seeing what was in condition but hoping that Minus Two was still looking climbable. After four hours sleep we both felt pretty rough in the morning but after 1h30 of walking in drizzle reached the CIC hut, thankfully as we approached the hut the drizzle stopped and the conditions started to improve. After picking up some water we headed up to Observatory Gully and got our first closeup view of the Minus face and saw a very thin looking Minus Two, after a brief discussion we decided to carry on walking towards it to see if it looked any better. Minus One was looking fatter and had a team gearing up at the first belay, we decided that Minus Two looked climbable so went for it.

After a quick game of rock, paper, scissors at the belay I took the first pitch and very feeling slightly nervous setting off on a climb which I knew was difficult in thin conditions, the opposite to the weekend before where we set off knowing that every route was in fantastic condition and stepped out. Due to the thaw-freeze cycles in the week any signs of previous climbers on the first pitch were long gone which was great as while climbing up hooks is easy it is much nicer climbing up fresh ice. I quickly got into the groove of the climbing and was loving the climbing, it was very steep and much harder than Point Five in many places but there was just about enough gear to feel safe despite the thin conditions. A few times it was necessary to bridge out onto rock and there were a few tenuous moves well above gear but it was brilliant. 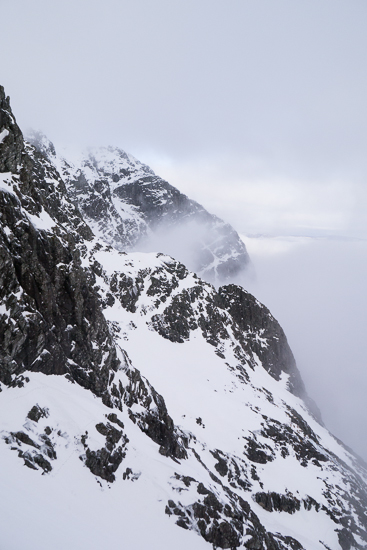 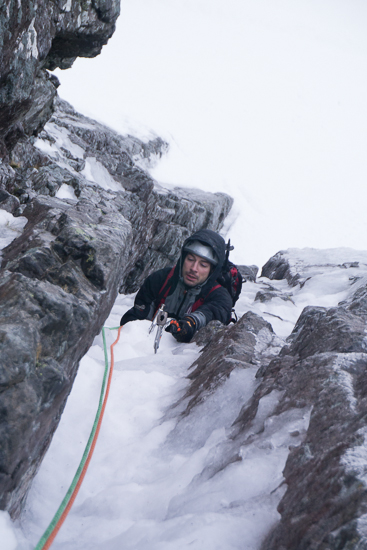 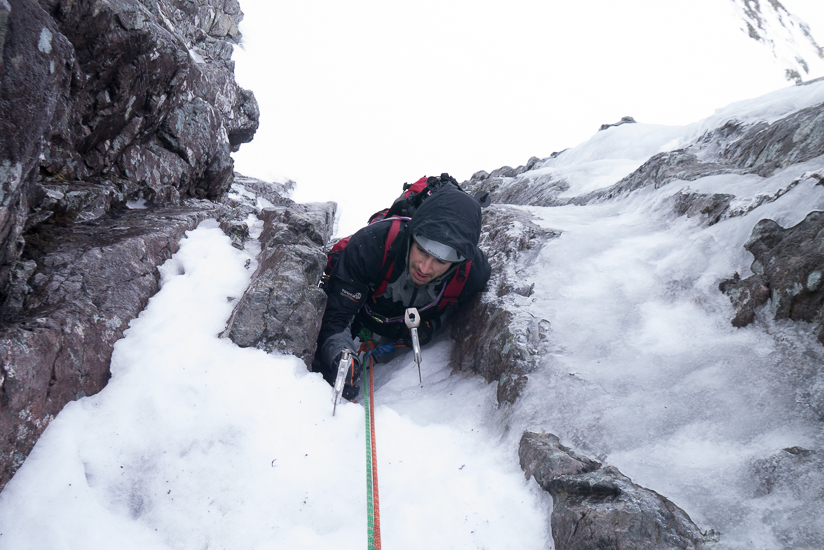 I soon arrived at the belay which was nice and straightforward as it was an in situe peg belay which I backed up with another peg. On the belay the cloud partly cleared giving a very atmospheric view of Tower Ridge but this didn’t last and the cloud was soon back but this really didn’t matter due to the great climbing.

From the belay all we knew was that there was a traverse left and then the direction was up, David headed out left and chose the steepest line up the brilliant thick water ice. From the belay I had no idea what the rest of the pitch would be like and just belayed by the feel of the rope for a full 60m. Eventually the three tugs of the rope came and I started climbing, knowing that the belay was probably crap due to David running out of rope, the first section was fairly steep but brilliant climbing, as I climbed high enough to see over the top the view up was amazing with just a massive sheet of brilliant water ice which carried on all almost all the way to the belay which I arrived at with a massive smile on my face. As I expected I discovered that the belay was indeed crap with a tied off ice screw and peg combined with a nut in a loose looking block. 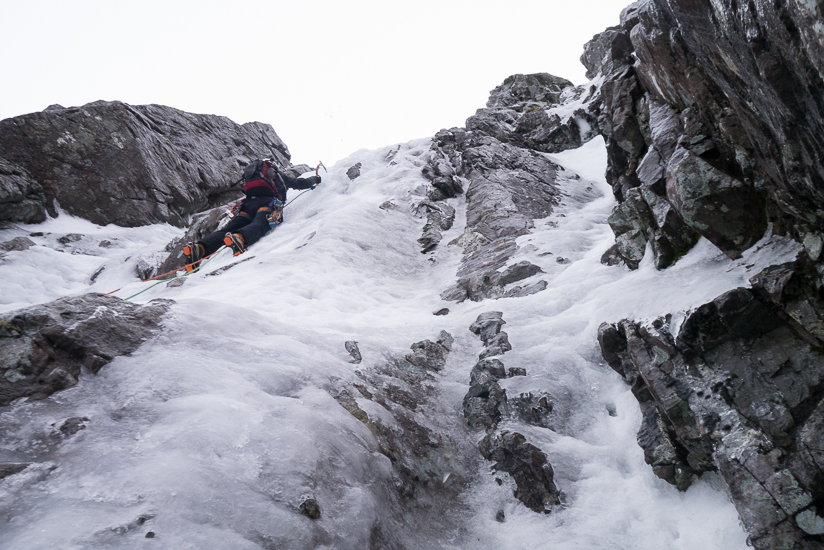 On the steep start to the second pitch 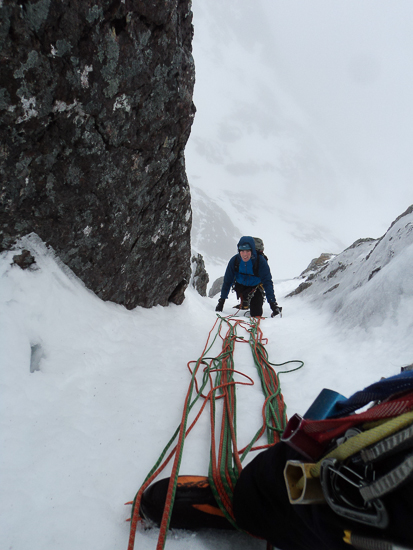 Me arriving at the top of the second pitch

The great ice continued up the next pitch which was a groove up with lots of short and very steep sections, some of which were overhanging. Due to the crap belay I was very glad to sink a 19cm ice screw into bomber ice shortly after the belay before heading up the first overhanging section of ice. There was brilliant climbing all the way up to the final belay which I took at the base of the final steep section using a great ice screw belay. David then lead the final steep section and snow slope to run out of rope about 2m below North East Buttress. 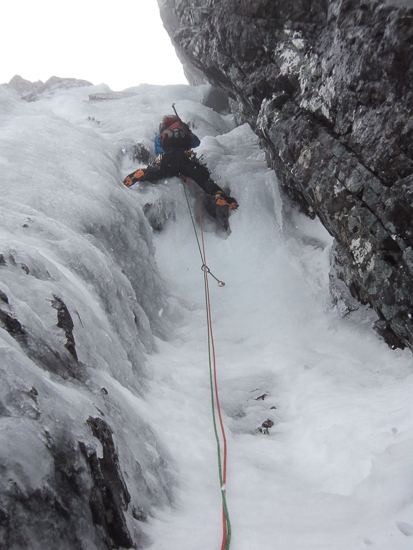 Me climbing the steep third pitch 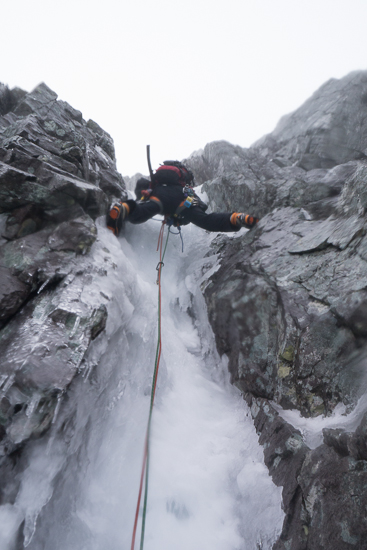 As we had made good time on the climb we decided to carry on up North East Buttress a grade IV, 4 route. It was a very different route to the ice climb we had just done as the crux was mixed climbing, something I have done none of and David has done very little of. We moved together for most of the ridge and there was some great ridge climbing with some easy mixed moves before we arrived at crux “the Mantrap”, this was a very short section of steep rock which we both made look very difficult and I think we both found it the hardest few moves of the day despite having just climbed a hard grade V ice route! While I was balancing on one axe desperately trying to find a placement for my right axe to rockover onto a good foothold I was certainly glad that I wasn’t leading the move! The final tricky section of the ridge is the badly named “40ft corner” which is in fact about 20ft, while being short though it was very bold with no gear all the way up, but that didn’t matter thanks for a thin line of ice running down the back of the corner which made the climbing straight forwards. Towards the top of the corner I even managed to use my first ice axe torque while climbing a route. 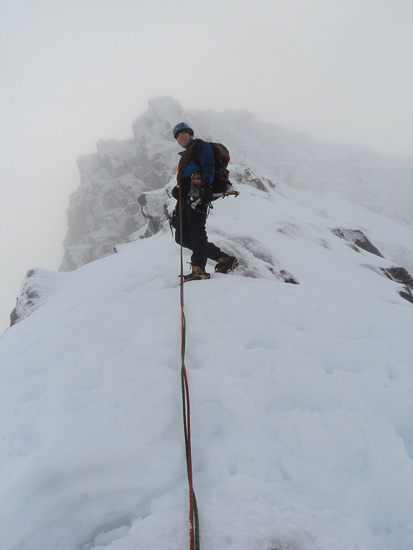 Once at the top we packed our climbing kit up and blindly walked up towards the summit which we saw when we bumped into it thanks to the hill fog, enjoyed a nice lunch before heading down Number four gully (again!) back down to the CIC hut and then the valley. Minus Two gully is the best winter climb I have done to date due to having so much variety of climbing, being so interesting and challenging combined with the brilliant top out along the North East Buttress. 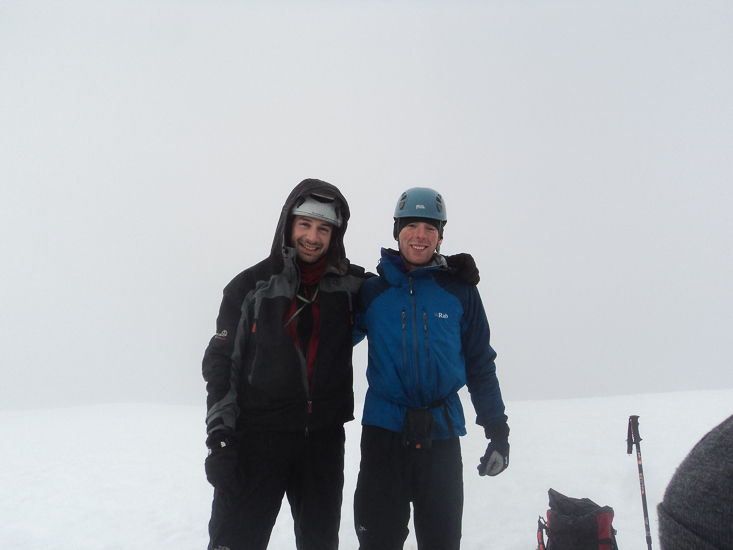 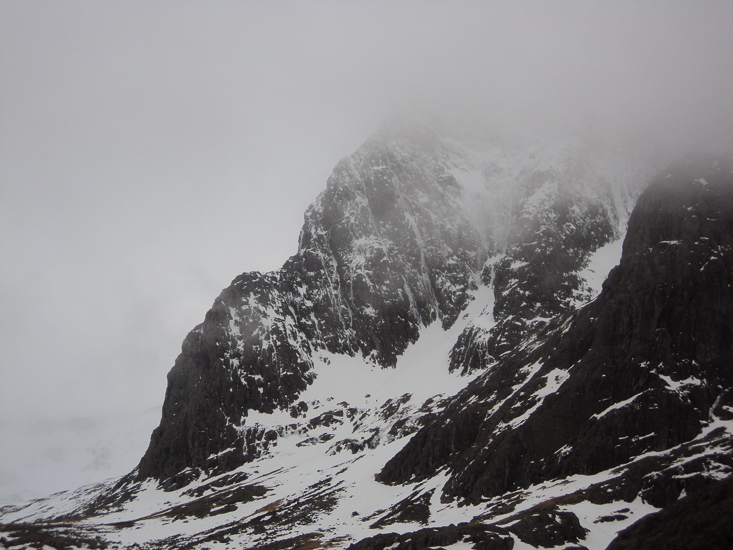