A route which I have heard so many people rave about and knew so little about due to never even considering climbing it, until this trip where the mountain was in great condition, I had partners which were capable of climbing it and partners who wanted to climb hard which made me want to push myself. As with the previous two days the first line of the guide book was fantastically inspiring “An outstanding climb, probably the most famous ice gully in the world!” and when Saturday night came and we agreed we would do it on Sunday I was both very excited and slightly nervous, especially as I asked to lead the crux pitch (I do like to throw myself in at the deep end).

Due to wanting to be first on the route and having to drive back to Bristol we woke up at 5:30 however still we were not the first people walking up, thankfully we saw one party turn up to head to Coire na Ciste and we passed another at the CIC hut, however there was still one party heading up to Observatory Gully so we moved quickly and at the turn off towards Orion Face we caught up with them and thankfully it turned out that they were heading to Orion Face so had a moment to catch our breath. Despite this we couldn’t relax as there was about 3 other teams quickly approaching us so we started up the never ending, very steep snow slope up to the base of the climb. Eventually we arrived at the base of the climb, geared up and set up a belay. We were quickly joined by another team who had overtaken Nick and Steve but thankfully we were at the route first so got to enjoy the climb without having ice kicked down onto us or having to queue. 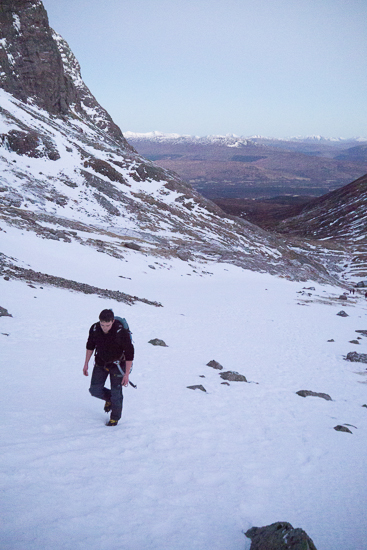 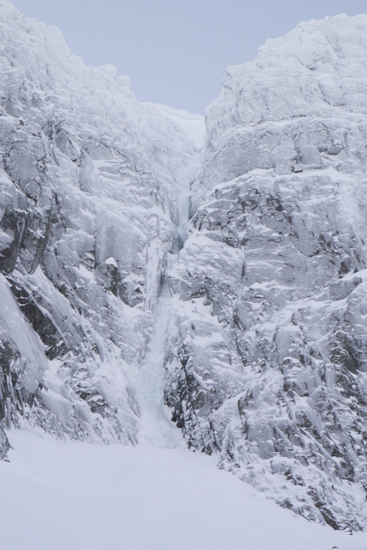 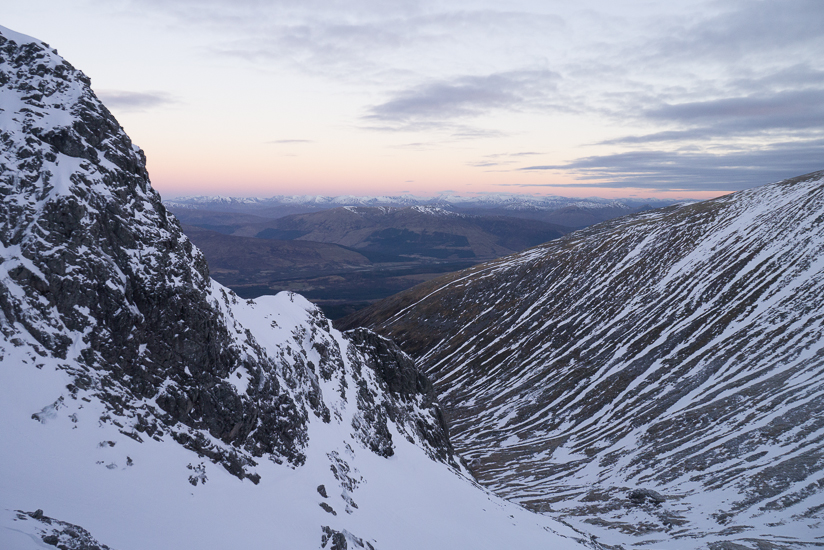 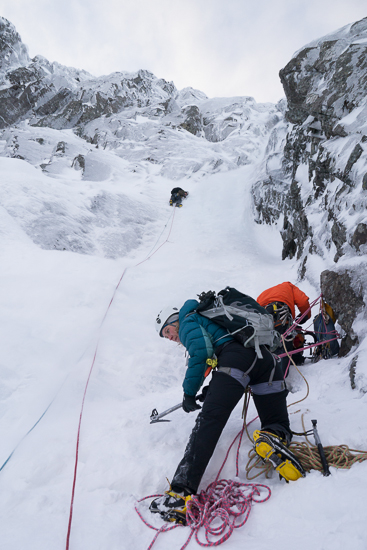 While the walk in to the base of the route was fairly brutal the scenery was fantastic with a completely clear sky, very clear air the dawn light provided a fantastic view. Once the sun started to rise the mountains started to glow orange which reminded me of alpine sunrises, especially the one I had on the Aiguille de la Grande Sassiere last year.

I was climbing with Alex who lead the first pitch, while he was climbing he had significant quantities of spindrift deposited on him, although I am still not sure where it all came from as there had not been any significant accumulations of snow in over a week! The climbing was very enjoyable on great ice which took screws well, however me and Alex both suffered badly with cold hands on the climbing and at about the same point just before the belay had horrible hot aches. The good side of hot aches at least is that once they have finished your hands are far warmer which made the rest of the climbing far more enjoyable.

After quick exchange of gear, some words of encouragement to dispel my slight nervousness I set off on the second pitch. It turned out my nervousness was completely unfounded and I had a brilliant time climbing the pitch loving every second of the steep, well protected climbing. I even got my camera out to take a photo looking down while bridging after placing a screw. All too soon I was at the second belay which was some frozen in pegs, some of which I couldn’t see due to the quantity of ice. 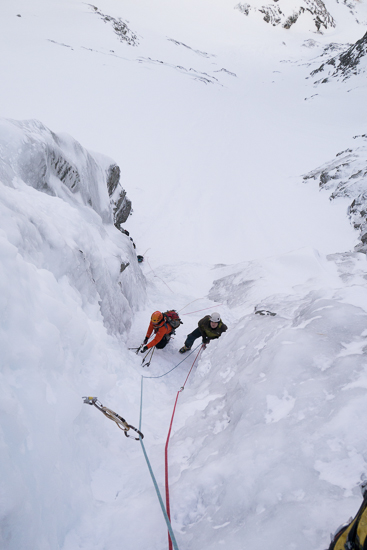 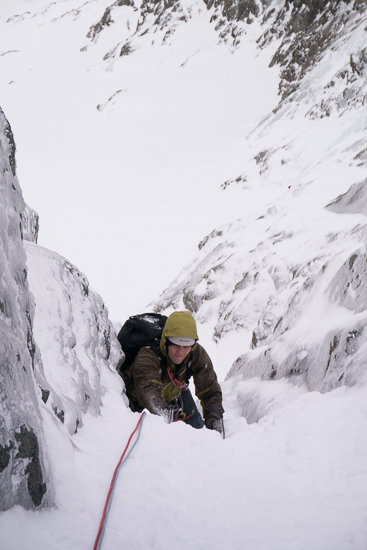 At the top of the steep section of the second pitch

Once I arrived at the next belay I took the gear off Alex and we moved together up the final 210m to the summit making sure that at all times we had a few solid bits of gear between us, it was almost as if the slope was designed for this as at every point just as I started to want to put more gear in so that we were both protected I came across more solid ice. After a few fun ice steps I approached the cornice which was very small and when I topped out I was greeted with the best view I have ever seen in Scotland! When we got to the top we enjoyed a very leisurely lunch, packed up our gear and absorbed the view. Unfortunately we had to leave before the others got to the top because we started to get cold so headed down Number 4 gully again to the tent for the last time.

We climbed Point Five Gully in just over three hours which I was very pleased with and it was a fantastic climb to end a brilliant weekend in Scotland with. When it is combined with the view from the top where we could see out to Skye and the Cuillin Ridge it was the perfect end to the weekends climbing, a weekend which I am not sure how I will ever beat while winter climbing in the UK having ticked off three of the most classic routes in the country, in perfect ice conditions and fantastic weather. 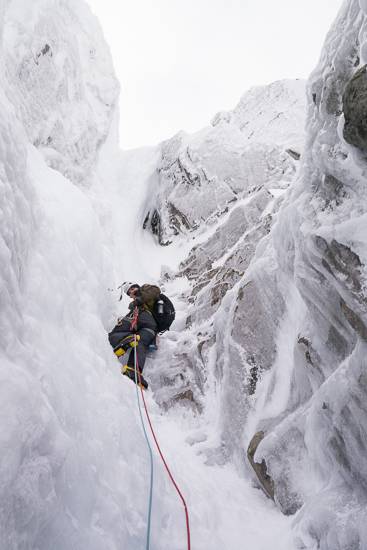 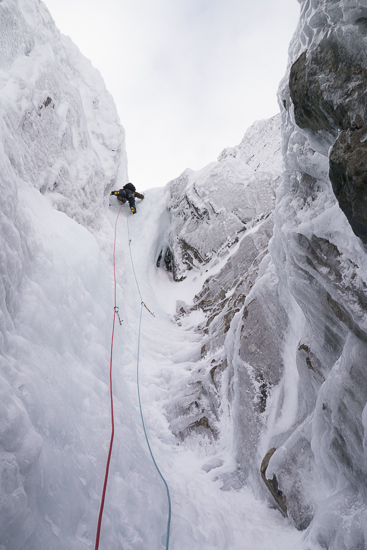 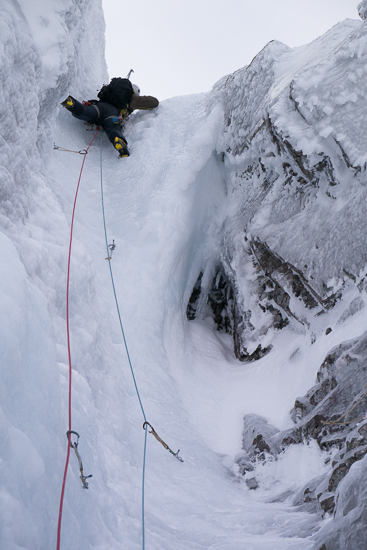 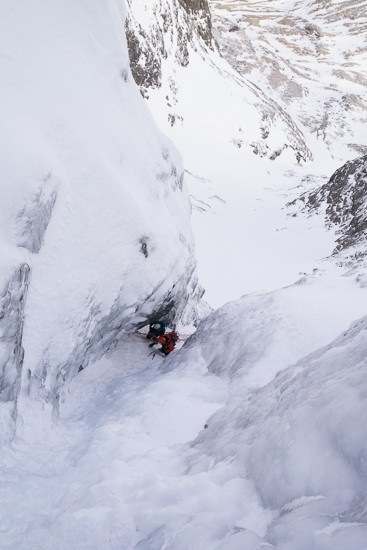 Looking down to the second belay 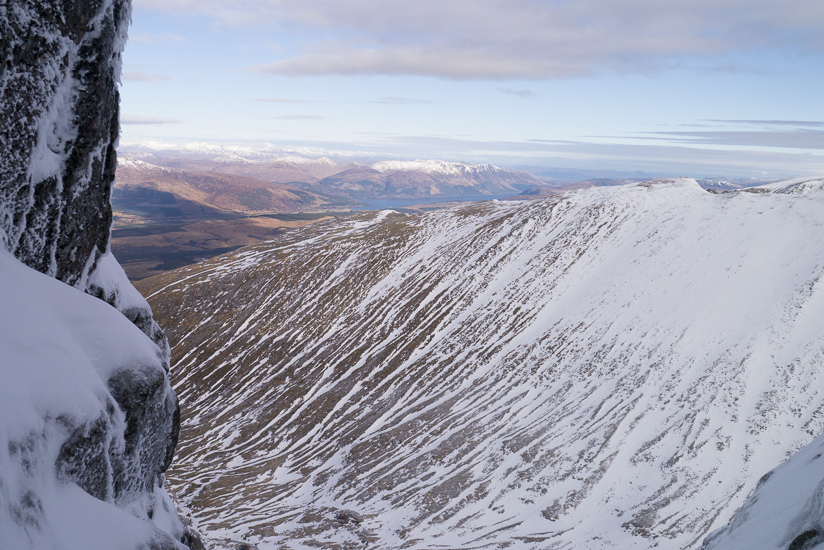 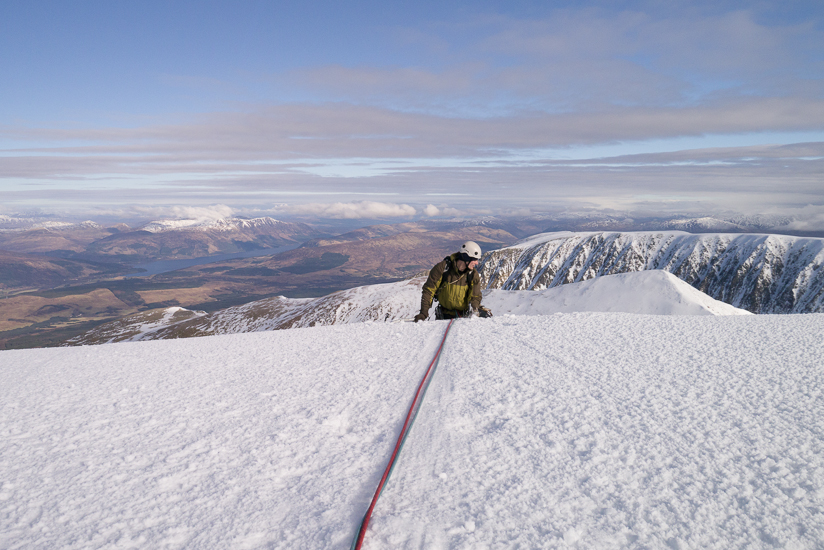 Topping out to brilliant conditions 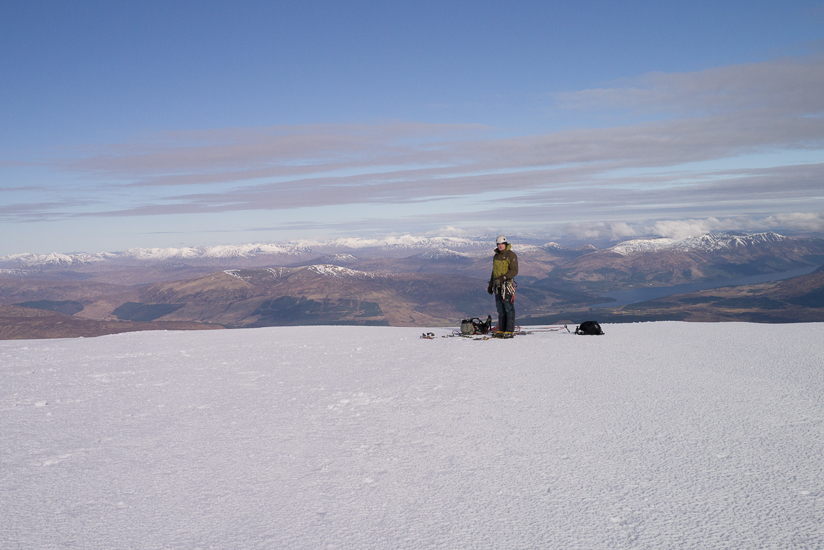 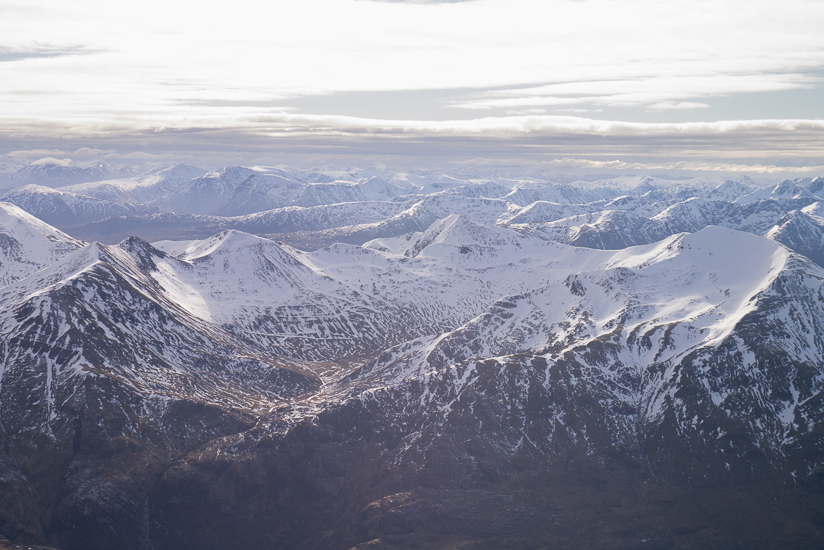 Scotland will always amaze me 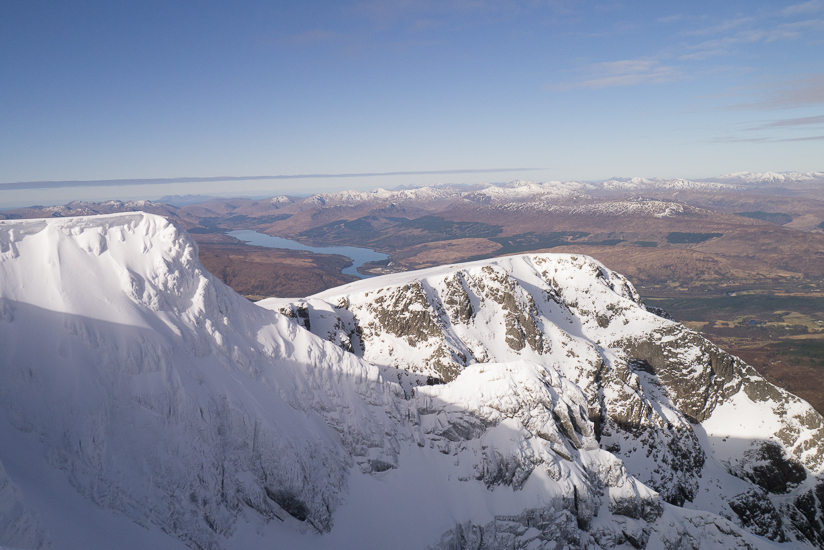 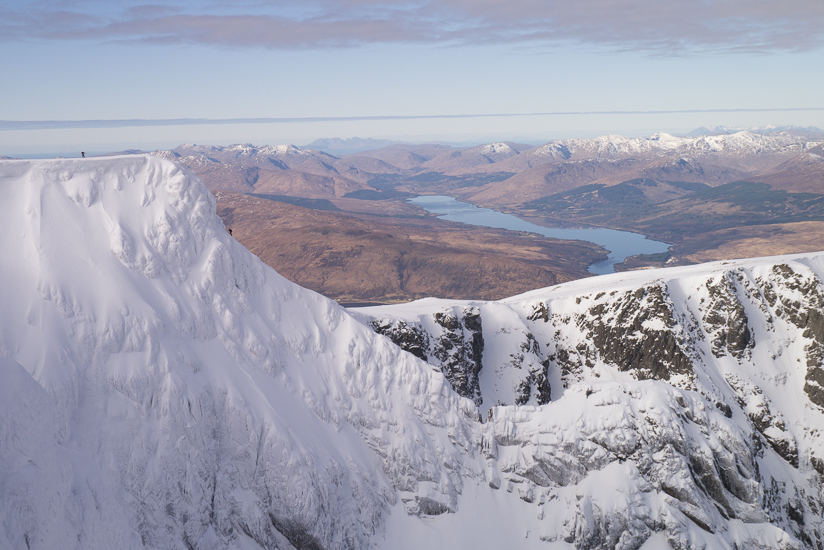 Climbers on Tower Ridge with the Cuillins in the background 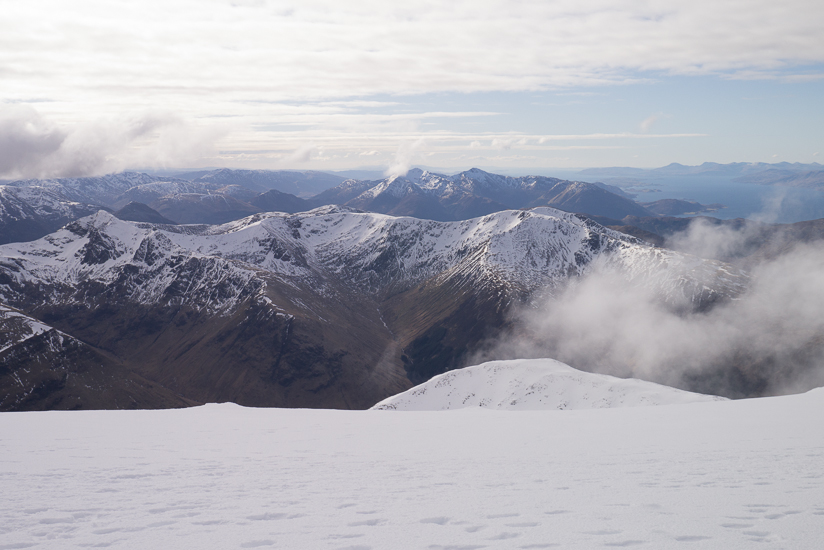 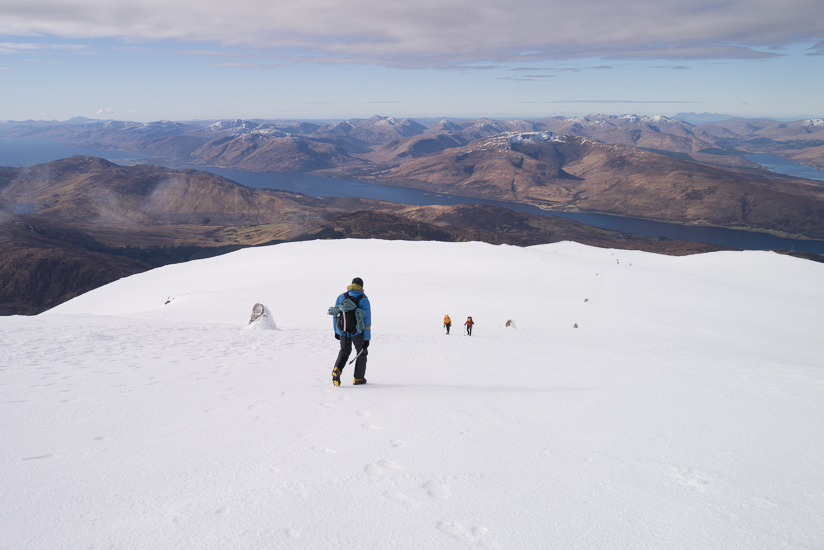 Walking off with specacular scenery 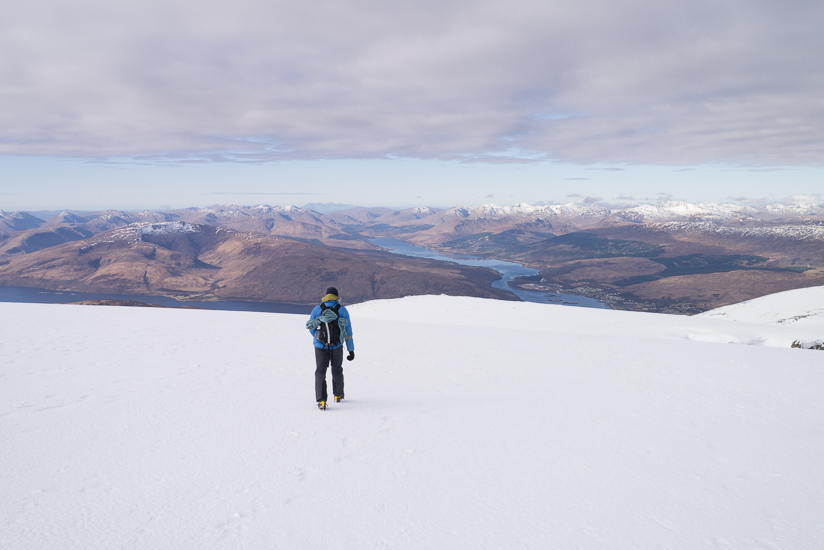