A Winter Ascent of Tower Ridge

Over the past few months Tower Ridge has become a slight obsession of mine due to how great the ridge looked in photos and the descriptions in guide books containing phrases such as “perhaps the finest mountaineering expedition in Scotland” and I was disappointed not to have managed to climb it when I was up in Scotland last week, however I am so glad I waited until this week to do it. We woke up early to avoid having to queue behind multiple parties at Eastern Traverse and Tower Gap, at the start of the day we were joined by Nick’s friend Steve so were now planning on moving as two groups of two on the ridge.

We woke up to a misty Ben Nevis and I began fairly optimistic that it was going to clear, however upon leaving the CIC hut it started to snow fairly heavily and at this point I assumed we were going to have a bit of a Scottish Day. The snow stopped after half an hour and the cloud base rose back up a bit as we ascended the gully up to the start of the ridge at Tower Gap and where most parties rope up for the Chimney up onto the ridge. I was on autopilot and about to start gearing up when someone questioned why we were getting the rope out as the chimney didn’t look that difficult, we all then agreed to solo the ridge until we felt the need to rope it. The chimney turned out to be trickier than expected from below but it was still fine and good fun climbing, we then carried on up the ridge in the cloud and after a few scrambling sections arrived at the base of the little tower. 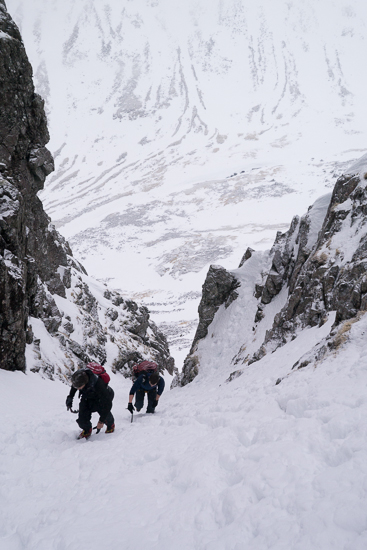 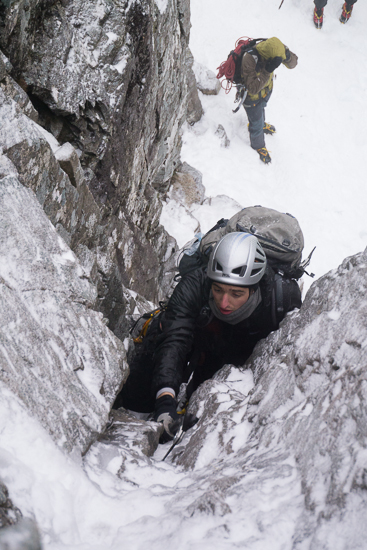 Climbing the Chimney onto the ridge 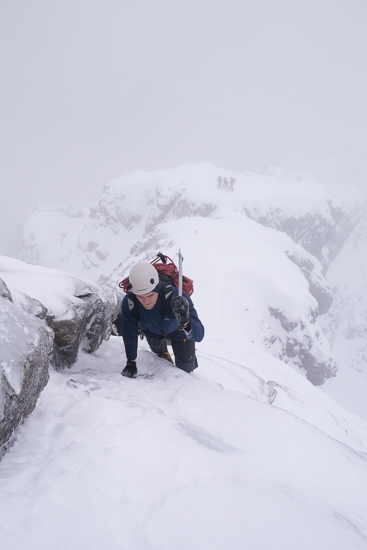 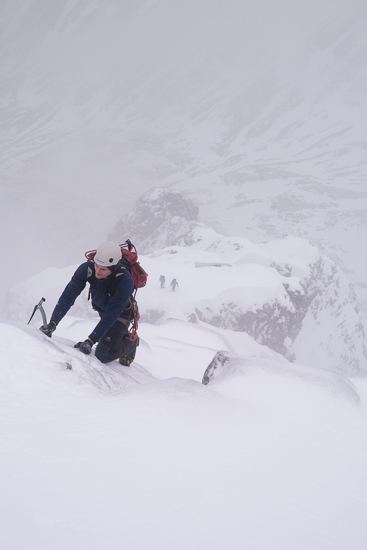 At the base of the Little Tower we caught up with Wilf from Climb Now and his clients who let us pass as we were still soloing, and after a brief check with everyone we started climbing up some fun ice scrambling on great snow ice and quickly caught up another team having a bit of trouble due to a dropped axe. We arrived at the start of Eastern Traverse at the same time as the pair who had dropped an axe and as the weather was clearing I suggested we waited, this turned out to be a mistake as we all got very cold waiting for the roped team to complete the traverse, which involved passing an axe back along one of the ropes.  It did however clear and the views were spectacular, although I think we all came up with a new mountain “rule”, if you have a chance to pass a team, do it! 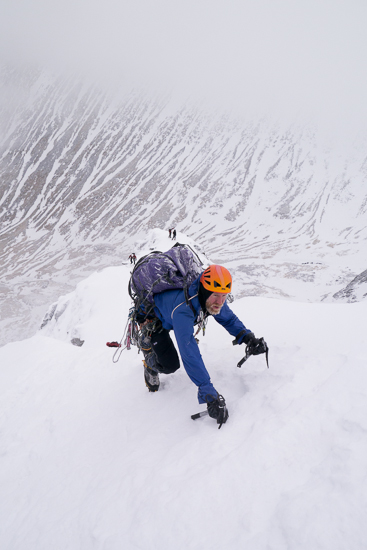 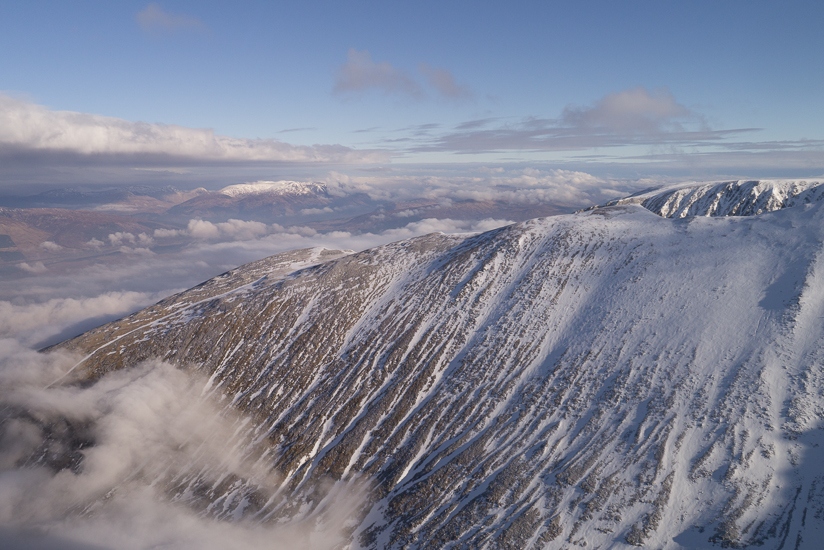 The view from the start of the Eastern Traverse 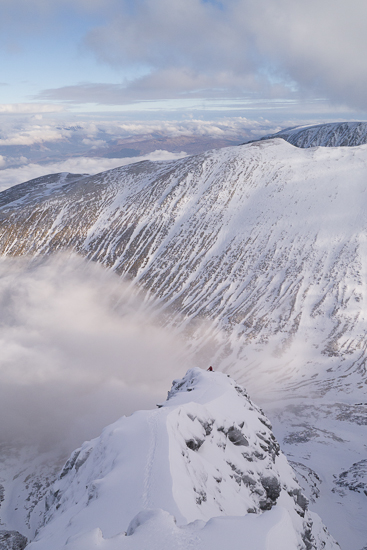 A team lower down on the ridge 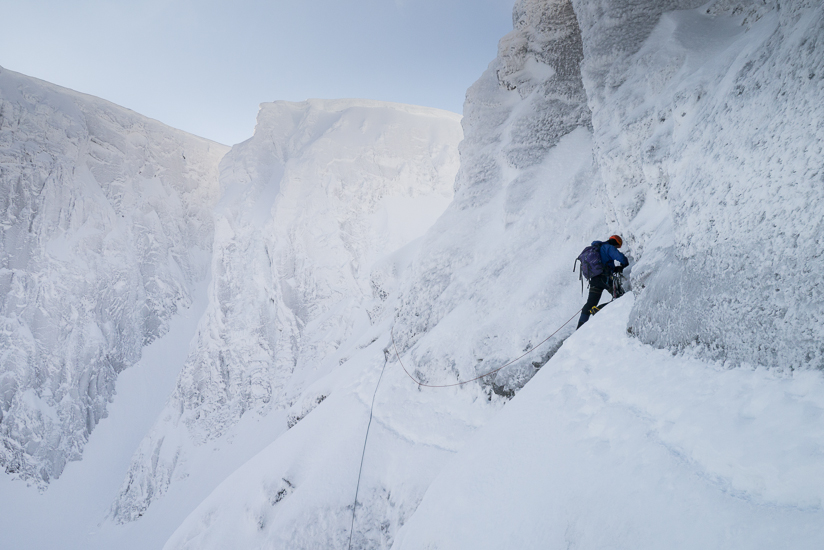 The team in front us of climbing on Eastern Traverse 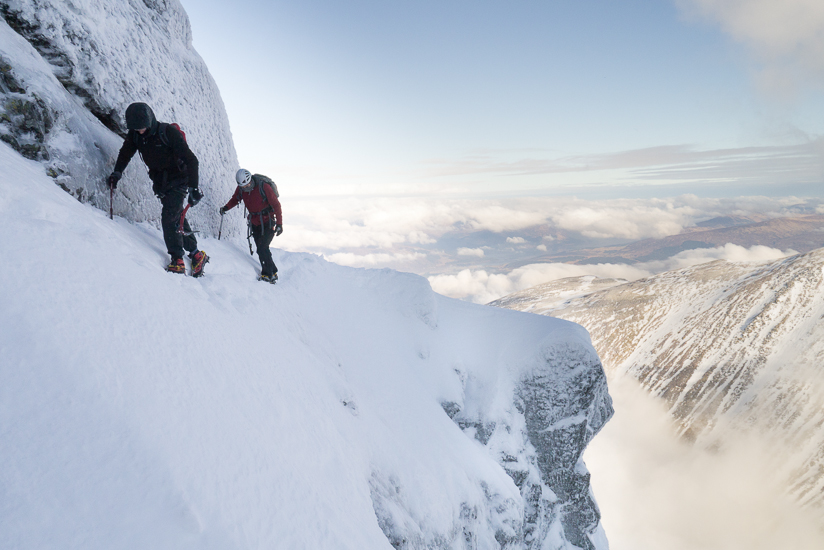 The Eastern Traverse in these conditions was very straight forward however in soft snow conditions I can see the traverse being a terrifying experience, soloing the pitch did create a wonderful feeling of exposure and was great fun. I even got my camera out to take the photo looking back along with the others crossing. By the time we arrived at the next belay the leader of the party had already set off so we had another cold wait, but as we were waiting the sun was slowly moving closer to us and eventually we were sitting in the warming sun. Once the leader of the party in front started setting up a belay we asked if we could pass and the belayer agreed so we started moving off. Due to him looking terrified about the prospect of climbing the next pitch with one axe, and as I hadn’t used my second one yet I lent him my axe for the rest of the climb. I found the next bit of climbing far more exposed than the Eastern Traverse due to having to climb along a ledge sloping into thin air with the rock pushing you out, which certainly made you feel exposed which was wonderful.

We quickly arrived at Tower Gap and decided to rope up due to the Gap looking fairly imposing, and after quickly getting the gear out I was ready to set off. After politely asking the person belaying at the top of Glovers Chimney if he minded me climbing over him, very generously he agreed so I set off. The climbing turned out to be straight forwards and quickly I was climbing up the other side, and for one more was very much regretting giving me second axe away and ended  up making a handhold in snow to get up out of the gap. 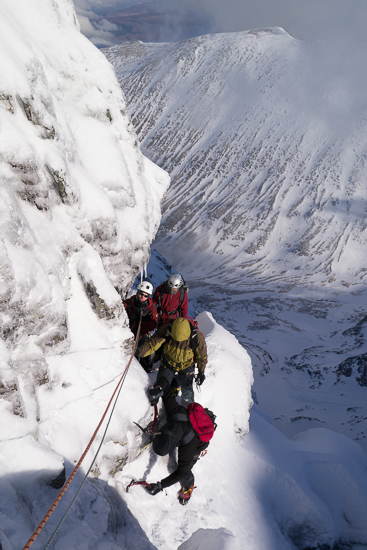 Passing the team in front 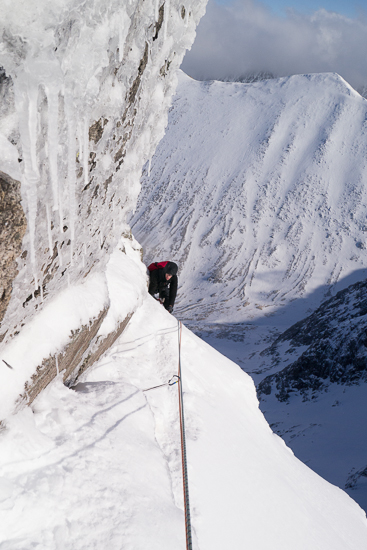 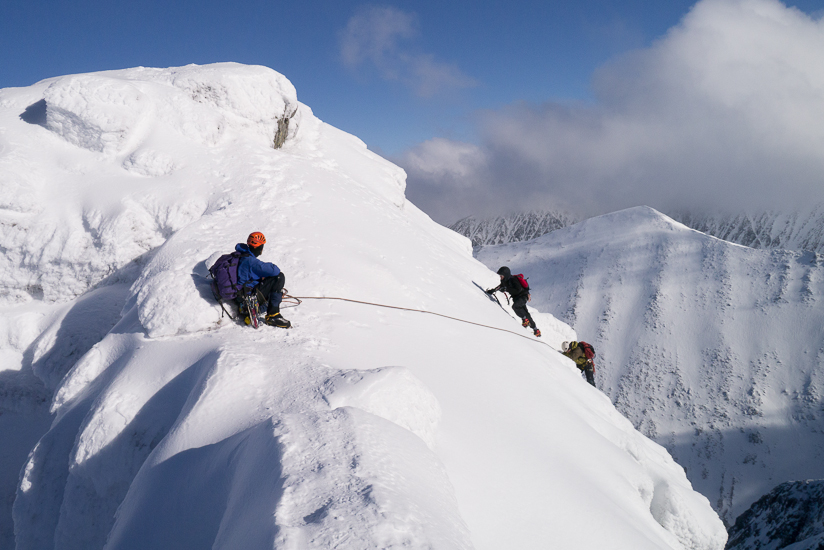 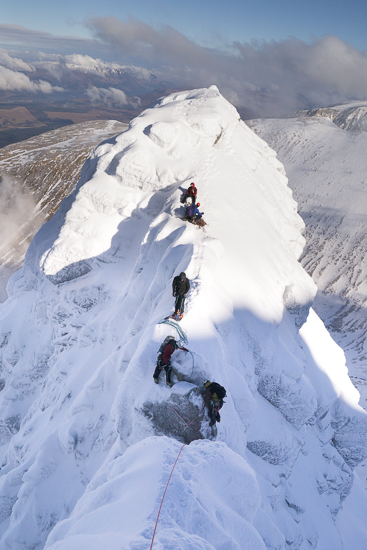 Once I reached the belay I quickly belayed Alex across, we then unroped for the final slopes and enjoyed the rest of the ridge to the summit. It was a fantastic ridge which we climbed in 3.25hrs from the base of the gully up to Douglas Gap to the top of Tower Ridge which I was very pleased with. It was felt slightly odd that we were calling Tower Ridge our rest day as the guide book does give 6-10hrs for the route but compared to the day before and the day after it was significantly easier and shorter due to being with a party that was comfortable soloing most of the ridge. 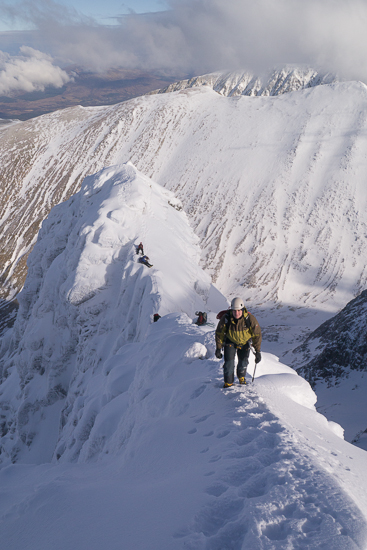 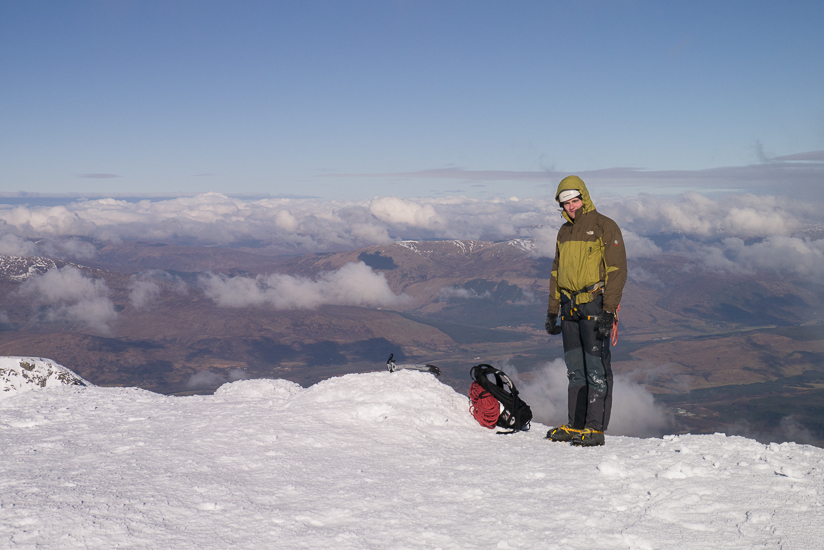 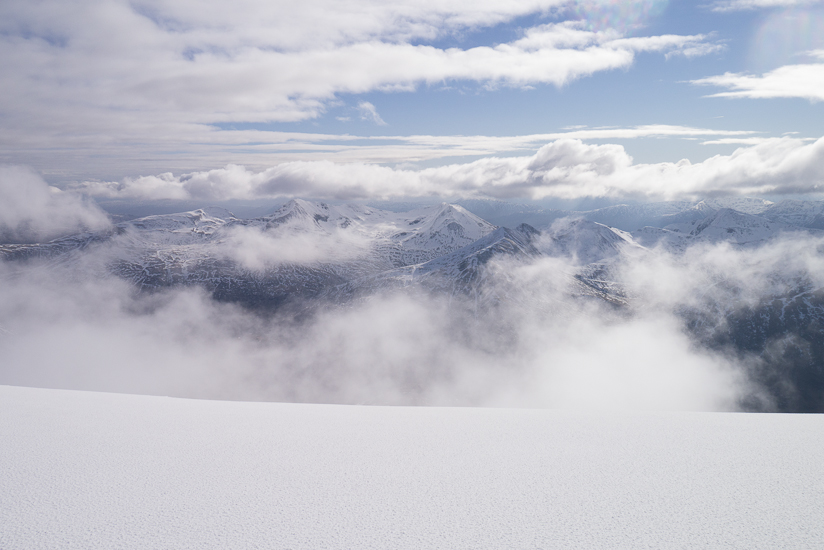 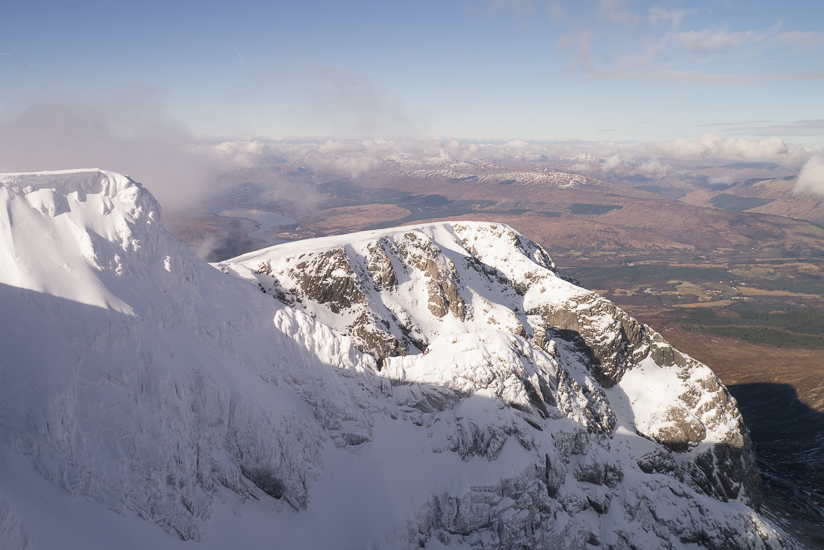 Tower ridge in the sun

The views from the top were intermittently spectacular and when it cleared the weather was certainly atmospheric, it was significantly colder on the summit and we were definitely sheltering from the wind while we ate some lunch. After a long wait due to the party at the top of Glovers Chimney finishing the route and getting between the party with me axe and us eventually I collected my axe back from a very great full person who offered to by us a drink later in the pub which was very generous, but even more generously he paid for our dinner without us being aware which was a very nice, if unnecessary gesture.

We descended Number 4 gully again to the tent and enjoyed a lovely walk out in the sun with more fantastic views, the walk back to the tent later was even better with a nearly full moon which was so bright that even in the forest we didn’t need any head torches. 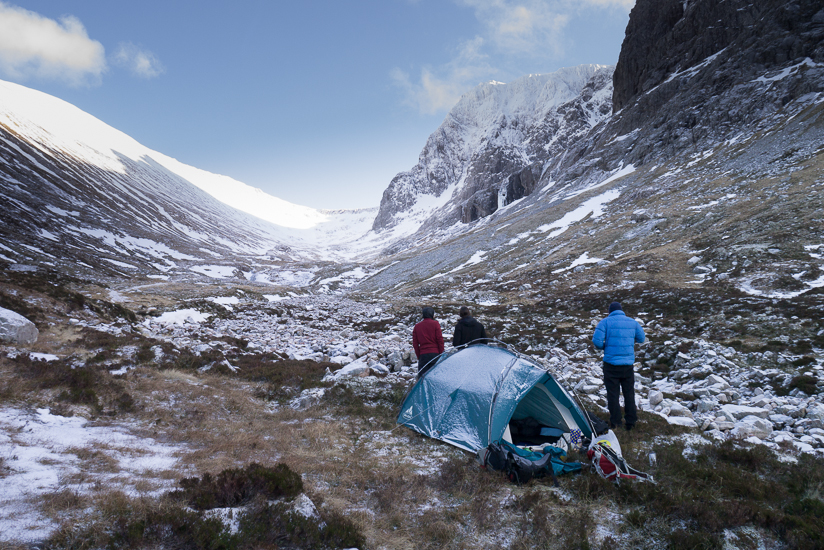 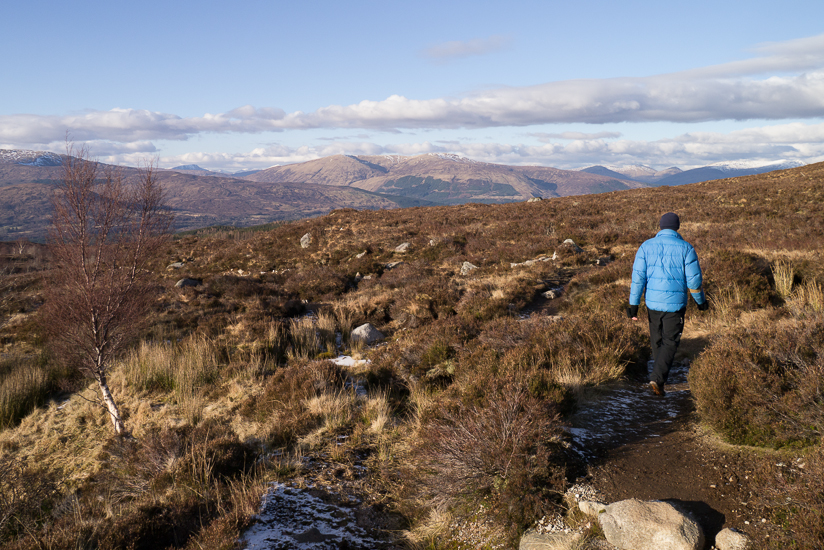 Walking out in the sun