My main aim for this trip was to do on this trip was a winter traverse of the Aoanach Eagach, however I was willing to wait until the conditions were right as I didn’t want to not enjoy what looked like it should be a fantastic mountaineering day out. Thankfully the conditions didn’t disappoint and with the forecast for Tuesday being brilliant we made the decision to go for it. After a 5:30 alarm we made it to the carpark or 7am and started the slog up to Am Bodach in the dark and made it to the top within two hours, unfortunately this early speed was not going to be kept up!

The conditions were not quite as good as forecast but they were still fantastic, with a high cloud base, clear skies and not much wind and this lead to fantastic views all the way along the ridge. I climbed the ridge with Hannah and Ruth, however as they were both inexperienced having only done Number 4 gully in the past I was guiding them along so we spent a lot of time moving together on a rope with me belaying them down all the climbs and then soloing down after them or the other way around for the ascents.

The day was absolutely fantastic and I loved every minute of it, Hannah and Ruth were brilliant and Ruth did a great job of picking the line for the downclimbs (ignoring one crazy moment). We did move fairly slowly while we were roped up but due to getting the early start it didn’t concern me as I knew that we had plenty of daylight and walking down in the dark would be fine.

All the different length downclimbs and climbs meant that I was constantly adjusting the amount of rope between me and the girls, and while I was efficient at doing this by the end of the day my arms were shot from constantly re coiling the rope! When it looked like there was more than a few mins of easy ground we removed the ropes as it took us no time at all to rope up and the time we saved by being unroped far outweighed the time it took to take the ropes off and put them back on, the entire day was great practice for alpine ropework.

For me the day was split into 4 sections, the initial climbing on the descent from Am Bodach and just after, an easier section up to Meall Dearg which I think we remained unroped for, the section between Meall Dearg containing lots of brilliant scrambling over pinnacles up to Stob Coire Leith and then the final easy section to the end of the ridge at Sgorr nam Fiannaidh.

The initial climbing was fairly slow as Ruth and Hannah had never done any mixed climbing before but they quickly started to trust their axe and crampons on the frozen turf and rock hooks, Ruth was brilliant at just getting on with it and working it out for herself before helping Hannah down from below while I was belaying. The abseil went without any drama apart from a few scared faces, it was the first time Hannah has ever abseiled and I was very impressed with how quickly she managed to get down and even seemed to enjoy it! After some more downclimbing we got to an easier section so unroped and stayed this way (I think) until we got to the second peak where we had lunch at Meall Dearg.

After Meall Dearg the view forwards was brilliant and I was looking forward to this section with lots of pinnacles, we were roped up for most of it however for some of the longer easier sections we still removed the rope. It was all going really well if a bit slowly until we reached the crux. The crux was the first place I was belayed as from the start it looked fairly tricky, however I wouldn’t have a problem with soloing it if I did it again as I quickly realised it wasn’t difficult climbing for me. Me and Ruth both belayed Hannah across so she was protected on both the downclimbs and the climbs of the two pinnacles, however at the first pinnacle Hannah had a bit of an issue with the exposure so I converted my belay into a fixed anchor to so the rope could be used as a traverse line, clipped in and went over to help Hannah across. Eventually we were all across after Ruth crossed the section without much difficulty, apologies were shouted to the party behind us and we continued. At this point there were a few more downclimbs and small pinnacles but we were soon at the bottom of the final ascent up to Stob Coire Leith where we unroped for the last time.

By this point it was starting to get late and the sun was setting so we pressed on so we could manage as much of the ridge as possible in the daylight, we quickly made it to the top of Stob Coire Leith and after a few sweets carried on along the final section of walking to Sgorr nam Fiannaidh where we arrived at the summit with the final few mins of daylight. At this point we had been going without a proper break for around 5 hours so stopped to remove our climbing kit and have some more “lunch” as the final minutes of daylight passed.

The descent was fairly easy as we were just able to follow other footprints (while being careful to ensure they were on the right bearing) to the col between the Pap of Glencoe and Sgorr nam Fiannaidh before following the path down to Glencoe and the car which had been moved by the rest of the group for us down the valley to save us having to hitch hike up the road to collect the car. Having been out for 13.5 hours we were very tired and when we arrived back smiling the others couldn’t believe that we looked so happy after being out in the mountains for so long, which I think is a testament to just how great a day it was. 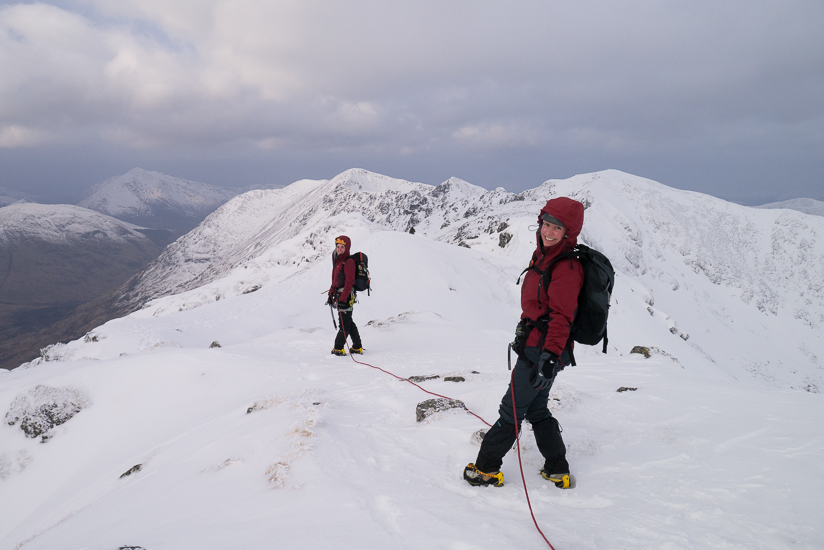 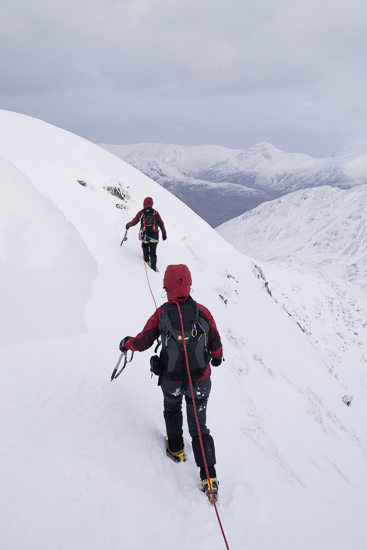 Some soft snow from recent days 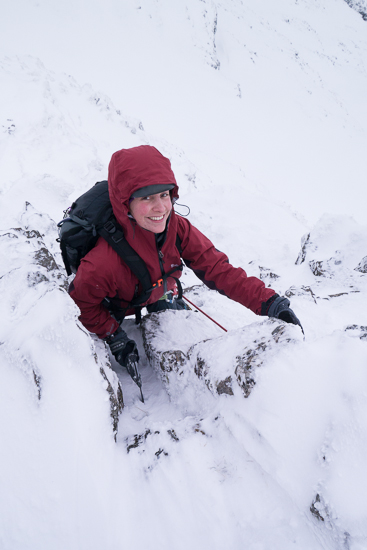 Downclimb from Am Bodach 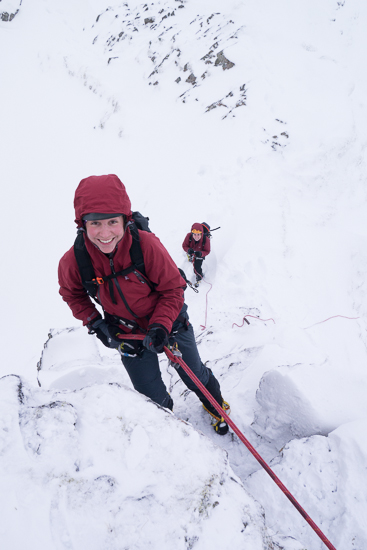 Hannah abseiling off Am Bodach 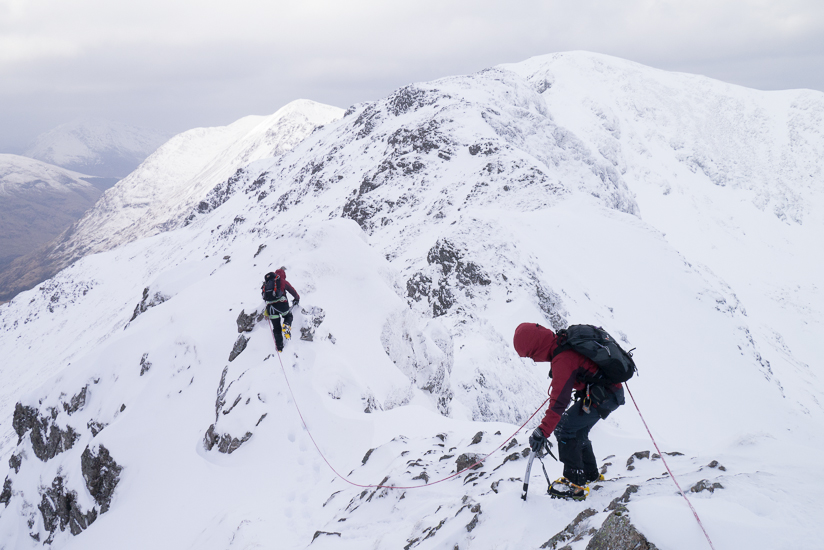 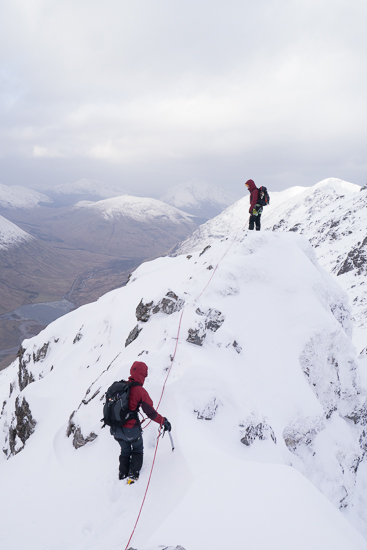 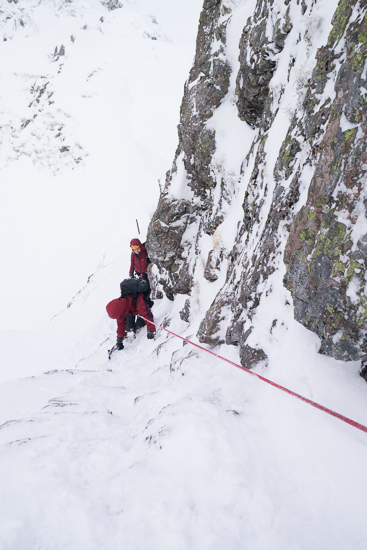 Final downclimb of the intial section of the ridge 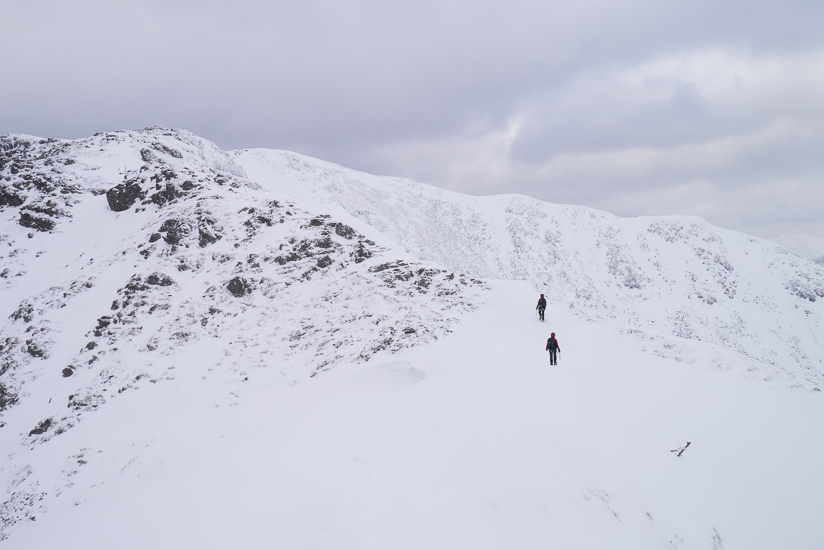 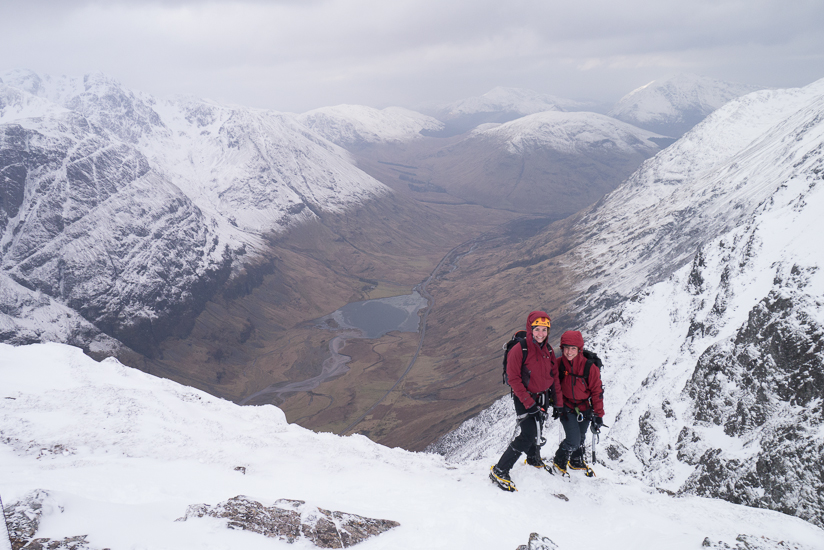 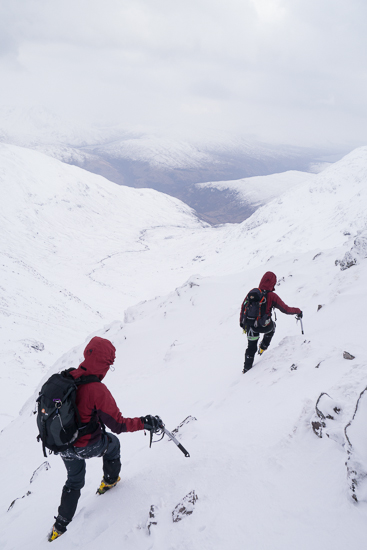 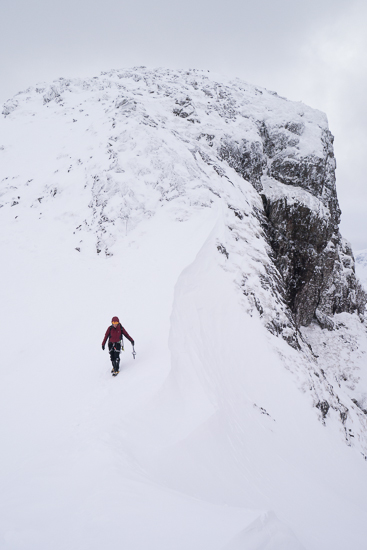 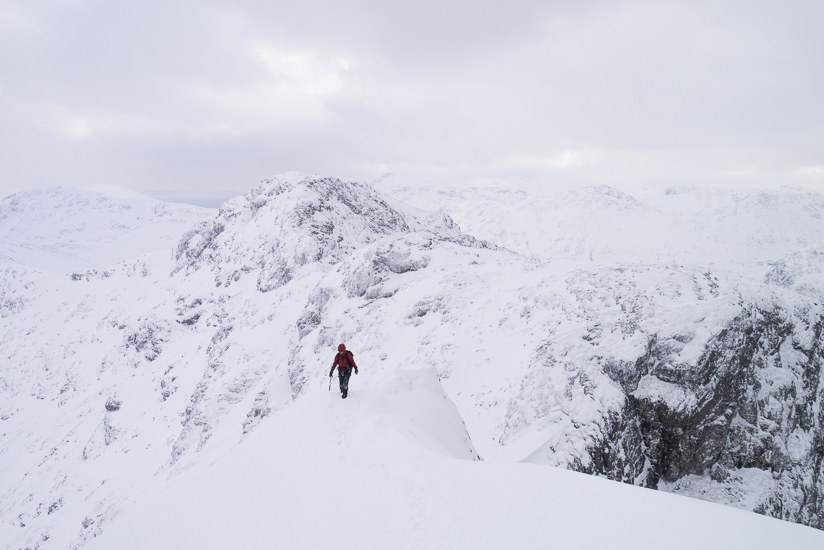 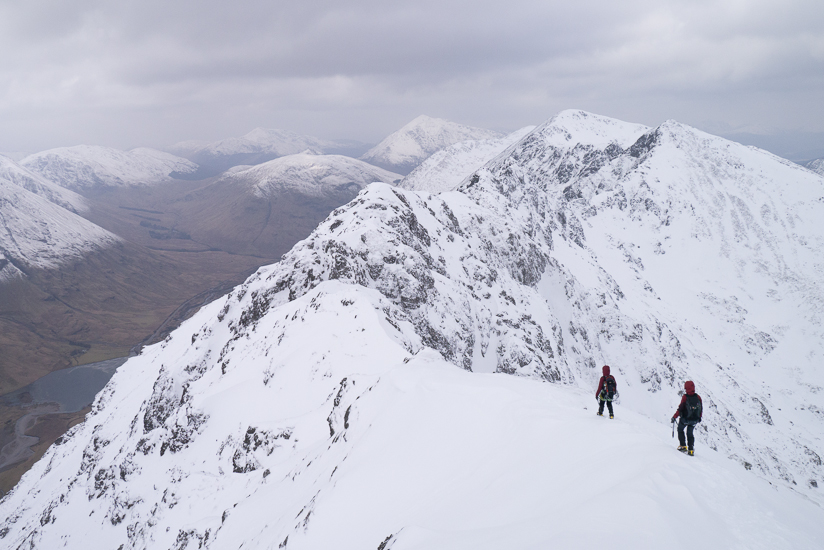 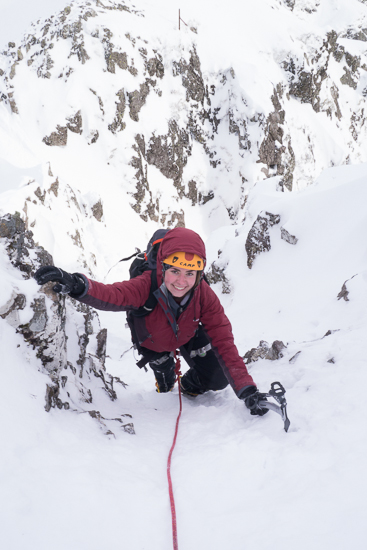 Climbing up an easy gully 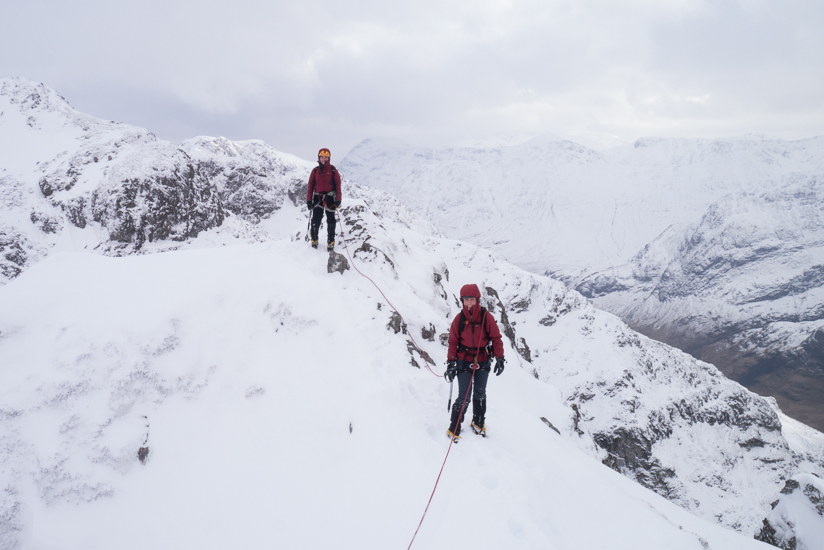 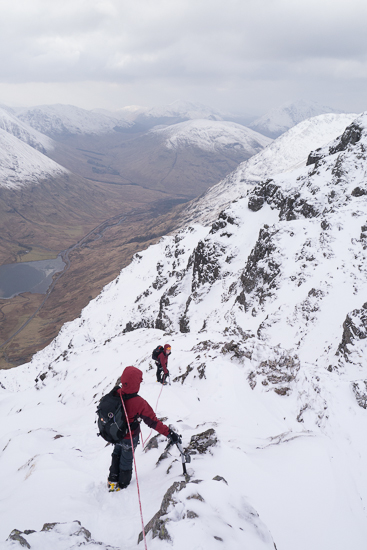 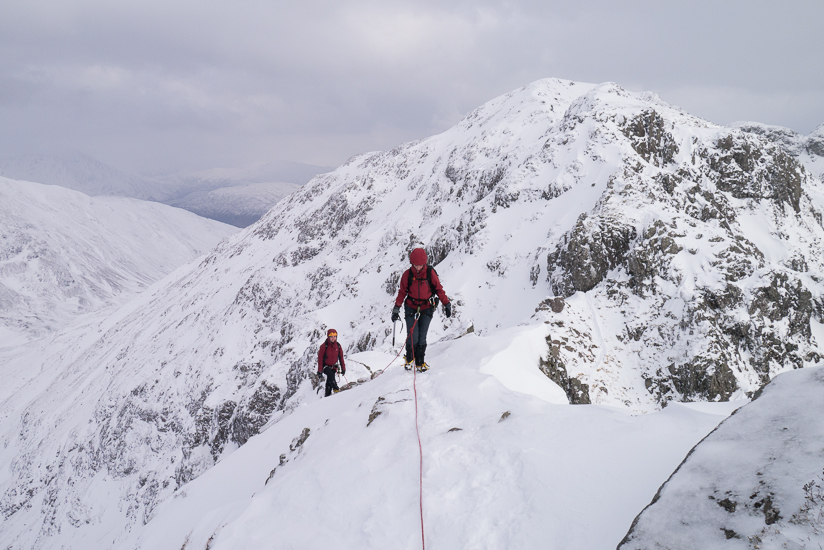 The sun made an appearance 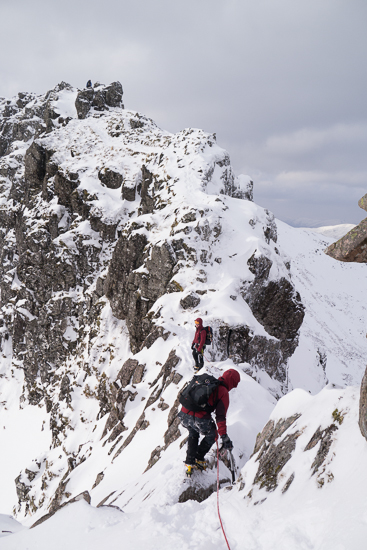 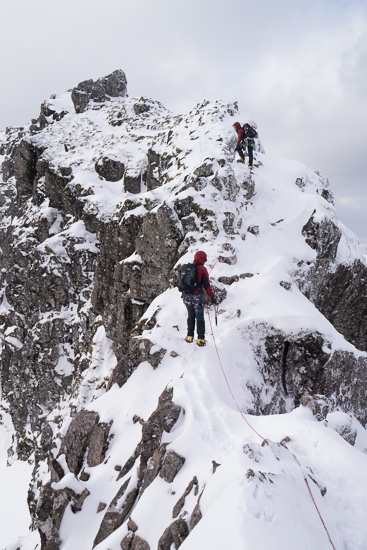 Scrambling up after a narrow section 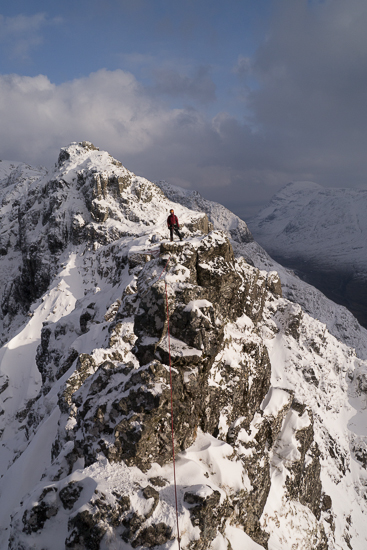 Ruth at the start of the crux in the sun 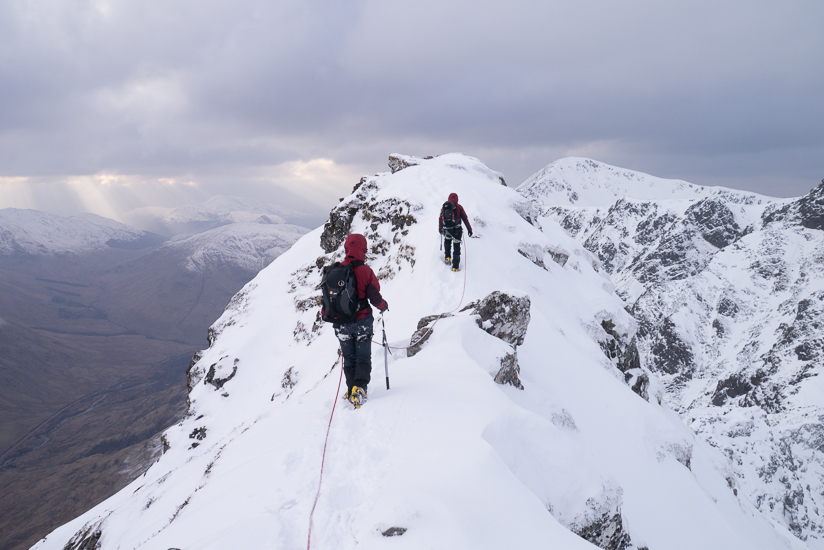 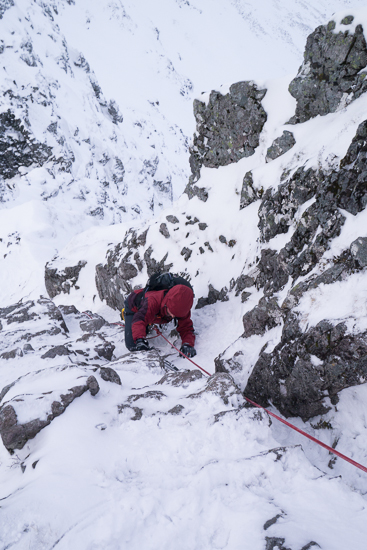 Descending off a pinnacle