An unplanned trip to Torpantau Falls

Today was the last day of this cold snap and I continued to make the most of it by having another day of holiday. We started the day and headed to Craig y Llyn hoping to manage a few routes in the day and expecting it to be in condition given the length of cold weather we have had. As we arrived in the car park the sun was just beginning to appear over the trees and made for a beautiful landscape with crystal clear blue skies. After the obligatory pre climb faff we started the walk in and quickly realised that we were the first to walk along the “path” since the snow, although we were swimming again rather than walking. It was very hard work and most of the time we were up to our knees, we both ended up waist deep multiple times but eventually we arrived at the top of Central Icefall, our first climb of the day. As we were kitting up I was a bit concerned about the lack of ice and upon starting the abseil I looked around at the cliff and realised that the ice that was around was very thin and where Central Icefall should have been there was just a stream with no ice! After prusiking back up the rope we began the swim back to the car, although thanks to six other people walking to the crag it was much easier going. The parties we passed were optimistically heading to the visible ice on Iron Claws, however while there was ice there I can’t imagine it was climbable! 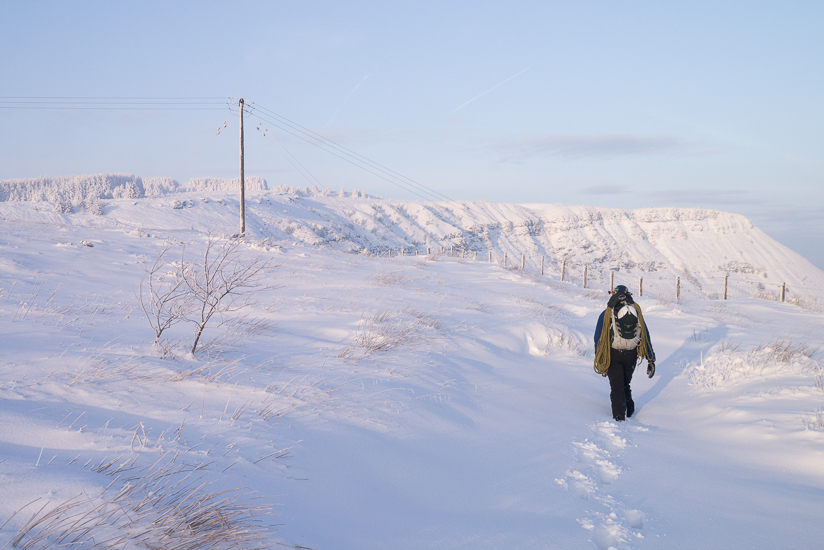 When we got back to the car we threw our bags in and decided to head to Torpantau which I climbed on Sunday as I knew it was in condition and would show Zack what some more sustained ice was like after doing Waterfall Gully and Craig y Fro yesterday. Due to starting late I wanted to park at the top again so put the chains on the car on the road past Talybont where it got icy, although to get to the lower car park there was no need for chains anymore, however the steep road up to the top has got significantly worse and I only just got up ending up with a very hot clutch in the process and thinking half way up that I was about to have to reverse back down it!

The walk into Torpantau falls was lovely with a cloudless sky in the sun the views were stunning and while walking up the valley it was almost alpine with so much snow around and because of the amount of people climbing the waterfall we even got to follow tracks all the way to the climb which made the walk in very easy! When we arrived I could see some people on the main belay ledge and there were two parties putting their gear on in front of us so I knew it was going to be a slow climb.

I soloed up to the main belay ledge at the bottom of the first pitch and then belayed Zack up to the ledge, he seemed much more confident today than yesterday so overnight a lot of what he learnt must have sunk in. The belay ledge was absolutely rammed with people with 5 roped parties and 3 solo climbers and being at the back of the queue lead to a long wait, from looking at photos it turns out we were on the ledge for 2 hours! At one point on the pitch there was a climber seconding the near the top, a climber leading in the middle and a solo climber climbing up below them!  By the time I started climbing again I was freezing and very glad to be moving and headed up the left hand side of the pitch and climbed it in one pitch this time, the corner at the top was the crux but was much easier than the right hand crux last time. While climbing the corner I was cursing myself for leaving my rock gear in the car as there was a lovely hex crack that would have protected the climb really well, but as it was a fall would have involved hitting a large ledge, but that was ok as you must not fall of ice climbing anyway! Again Zack shot up the pitch with little difficulty with a tight rope which was great to see after yesterday, while Zack was climbing another team went up the right corner and it was interesting seeing the scraping for the finishing placements with no ice from above rather than being the person doing it. 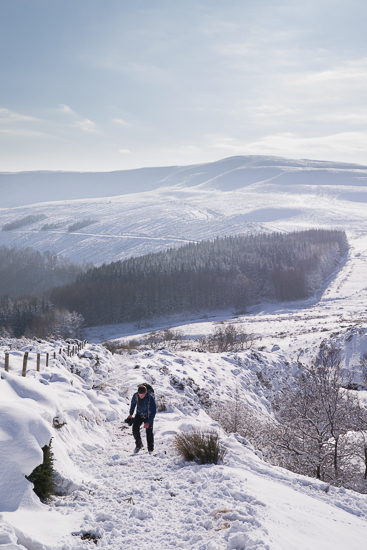 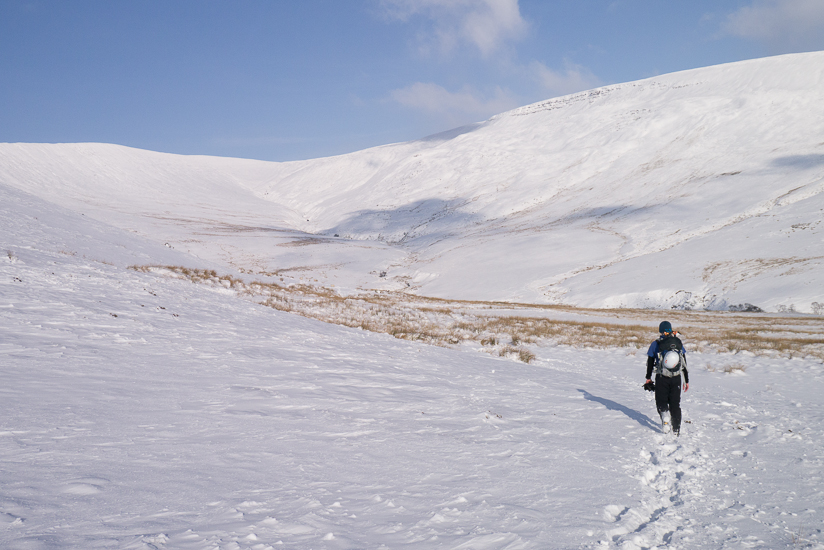 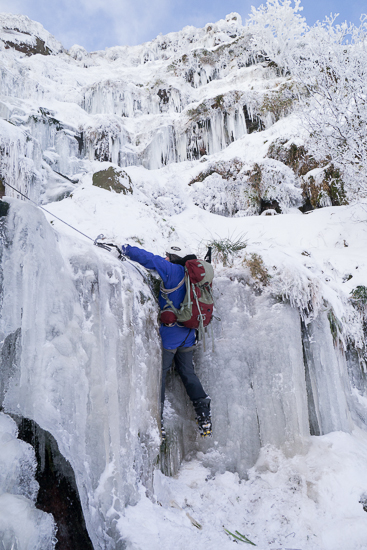 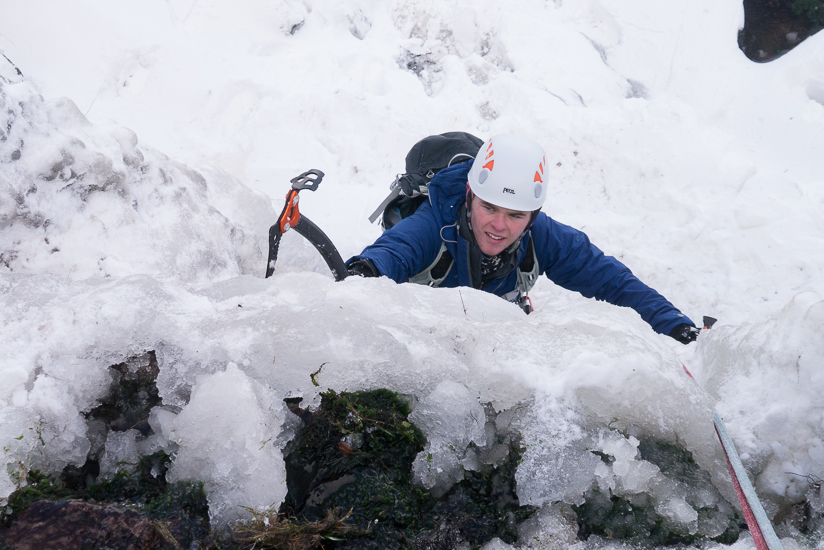 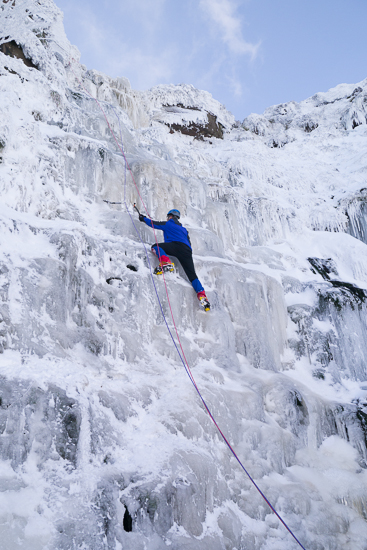 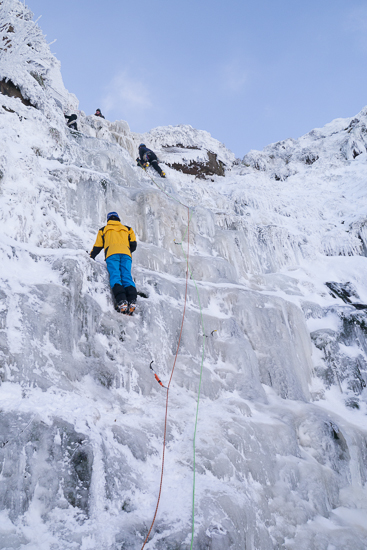 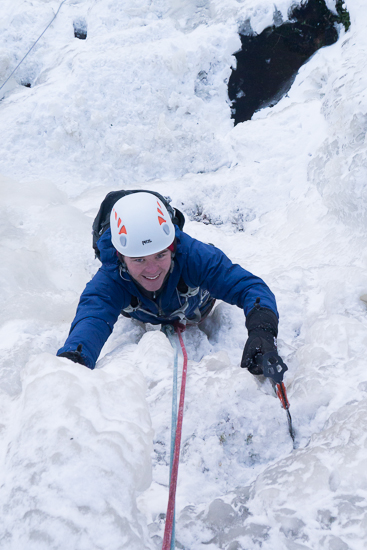 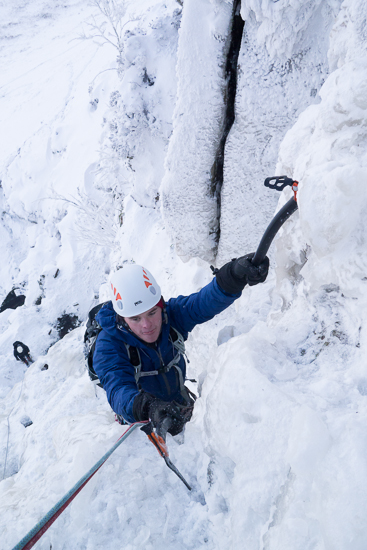 Hunting for ice for the top move

We finished the climb as the sun set and after quickly packing up soon arrived back at the car. Driving back along Talybont with the moon lighting up the whole valley was wonderful and it would have been great conditions to do a night climb, but that is for another time. The whole climb was very different today when I compare it with Sunday’s climb, all the lower falls below the main pitch has significantly less ice from where the thin ice has seen lots of traffic and it has been hit/kicked off, the main pitch was a different climb entirely with hooks all the way up for the axes and ledges for the feet from where many people have climbed it which made it much easier this time and it was also sounding pretty hollow with water flowing behind it. With the cold temperatures tonight tomorrow morning could be great but it is back to work for me tomorrow and if the weather forecasts are correct there will be no ice left to climb on Saturday as the gulf stream takes power again and brings back warm stormy weather.

It has been a great week with three brilliant days ice climbing in south wales, all I am waiting for now is either the next cold spell or my Scotland trips in February now that I have found my winter legs again!