After the success of Sunday’s trip to Torpantu and with a thaw arriving on Friday I booked two days off work to get out ice climbing in the Beacons again as it is just too much of a good chance to miss! Today I headed out with my housemate, Rhys, and a uni friend, Zack, they are both new to water ice climbing so after getting permission from the CCW we headed to Craig Cerrig-gleisiad to climb Waterfall Gully a grade II/III climb.

The walk in to the bottom was quick and easy where we geared up and left our bags, this was a severe contrast to the ascent up to the gully which was more of a swim than a walk up knee deep unconsolidated snow. After what felt like ages we arrived at the bottom of the ice pitch and it looked great and was certainly in grade III condition. It was a fun climb but it was unfortunately very short and after the ice there was more swimming up to the top. We descended down Central Gully to head to Miners gully but there was nice ice so we bum slid all the way down Central gully to get back to our bags. Due to the lack of ice on most routes and the amount of unconsolidated snow I would not recommend heading to Craig Cerrig-gleisiad tomorrow even if the CCW give you permission as it is just not worth the slog when Craig y Fro and Torpantau are in good condition. 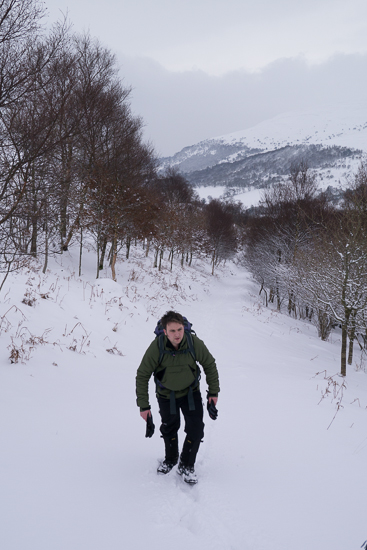 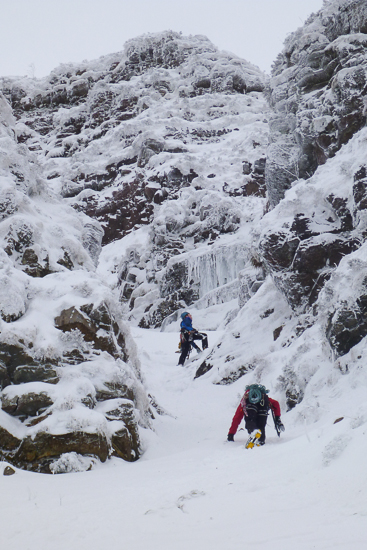 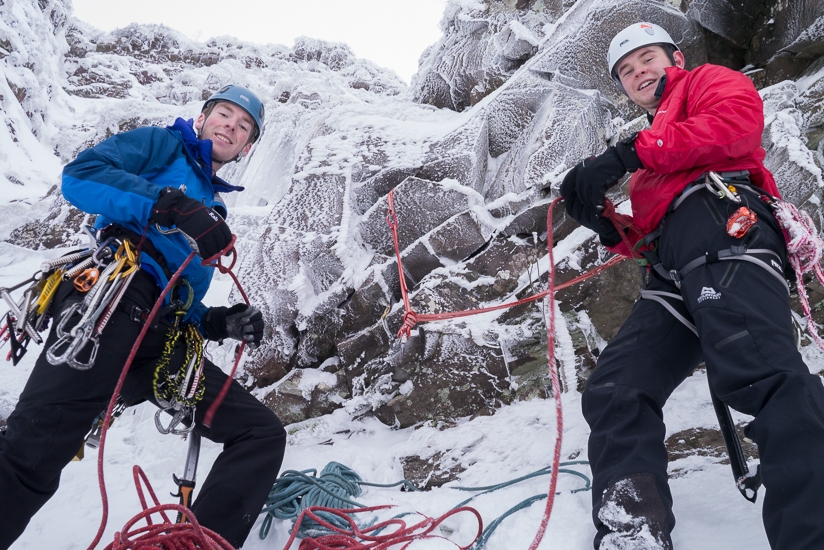 At the base of the ice pitch of Waterfall Gully 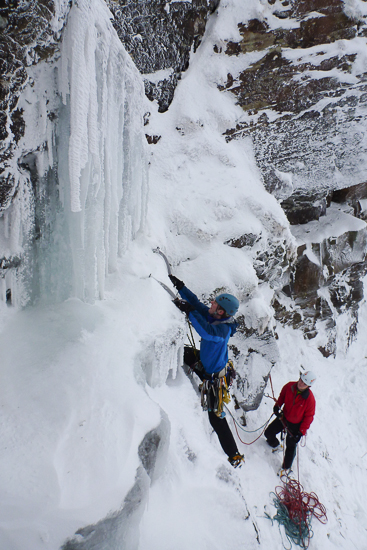 Me starting the ice on Waterfall Gully 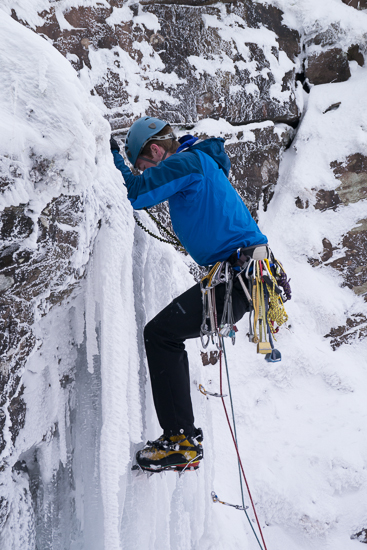 Me climbing the ice pitch on Waterfall Gully 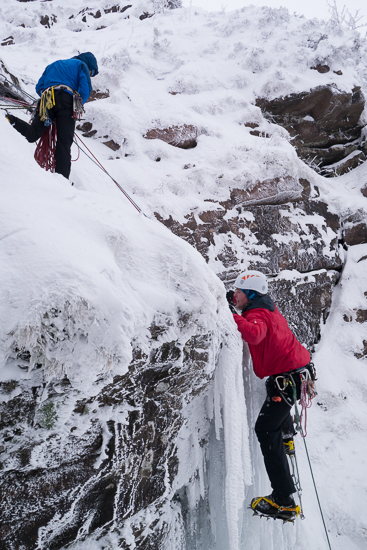 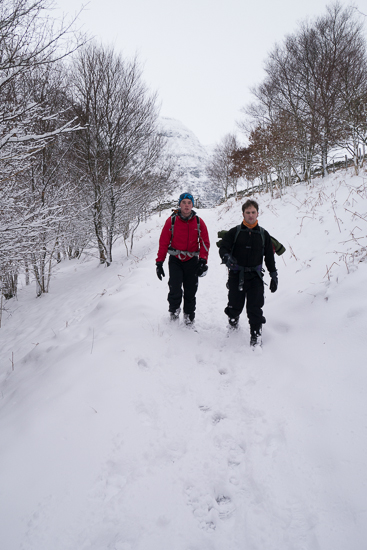 Walking back to the car

After a quick relocation, lunch and a hot drink we geared up in the car park to head up the main stream on Craig y Fro. This was in good condition with the steep section of the first falls climbable and thick enough for shortish ice screws, I guess these are the conditions that the climb pushes towards grade IV. While at the bottom of the pitch it looked fairly intimidating and steep, however once I got on the route it was wonderful climbing with some great frozen turf to aid topping out. Zack had a few issues following on his first attempt and managed to fall leaving both his ice axes in the ice while attempting to remove a screw he had climbed past so he took a rest while Rhys sailed up the climb with easy with a big grin at the top. Zach then had another go and with no screws to take out he got up without any drama and the change of his facial expression as he found a good frozen turf placement on the topout was wonderful.

It was then onto the easier mid section which I soloed up and made a very “scottish” ice axe belay to bring Rhys and Zack up on, this section was in good condition and provided some fun climbing which was enjoyed by all. Another short swim later we arrived at the final pitch which was looking thin but there was enough ice to climb. It had obviously been climbed before and from the previous ascents there were some great hooks for the axes which meant that none of us had to swing at the ice with our tools. Due to it being a short climb which was thin I opted to solo up it as there was nothing a rope would have done and then brought Zack and Rhys up on a rope before bum sliding most of the way back down to the car. 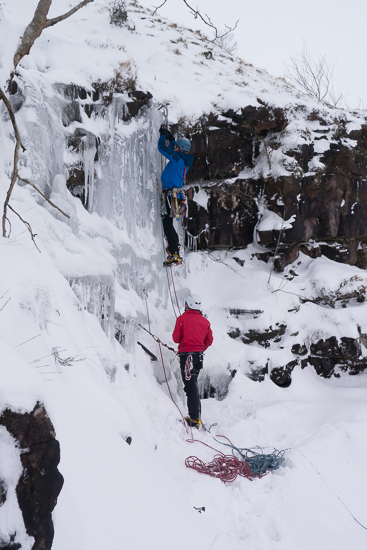 Me climbing the first pitch on Craig y Fro 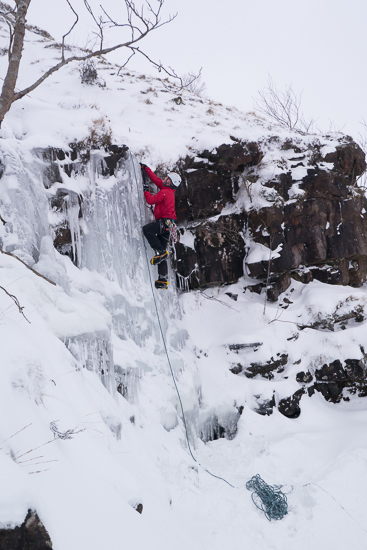 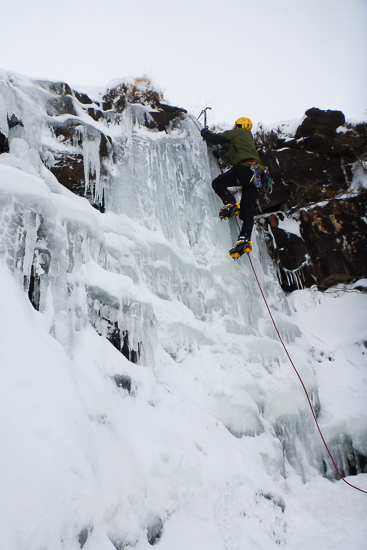 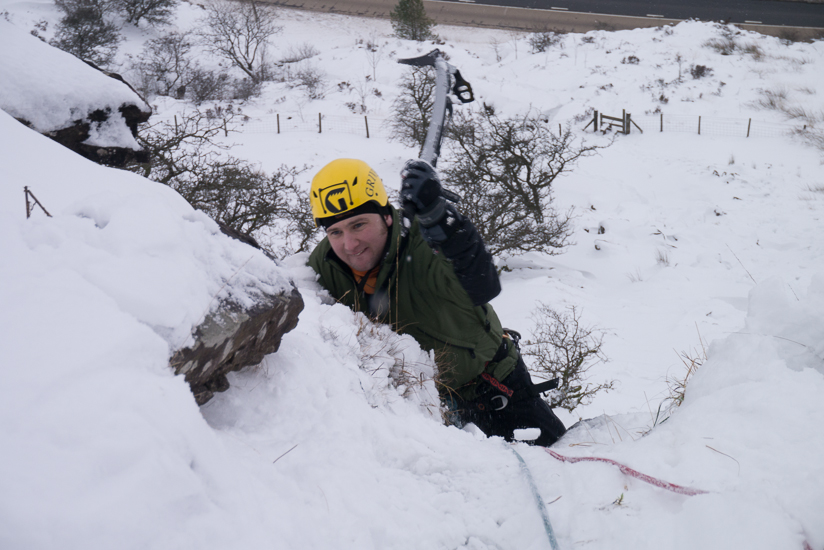 Rhys getting to the top of the tricky section 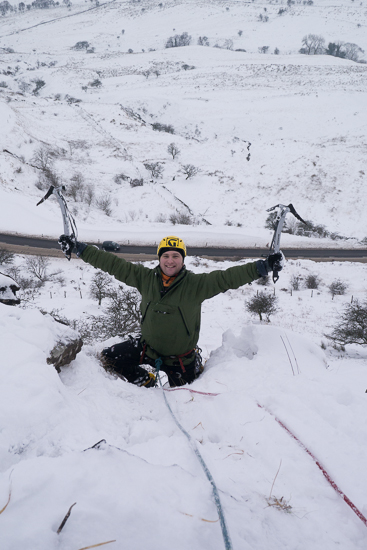 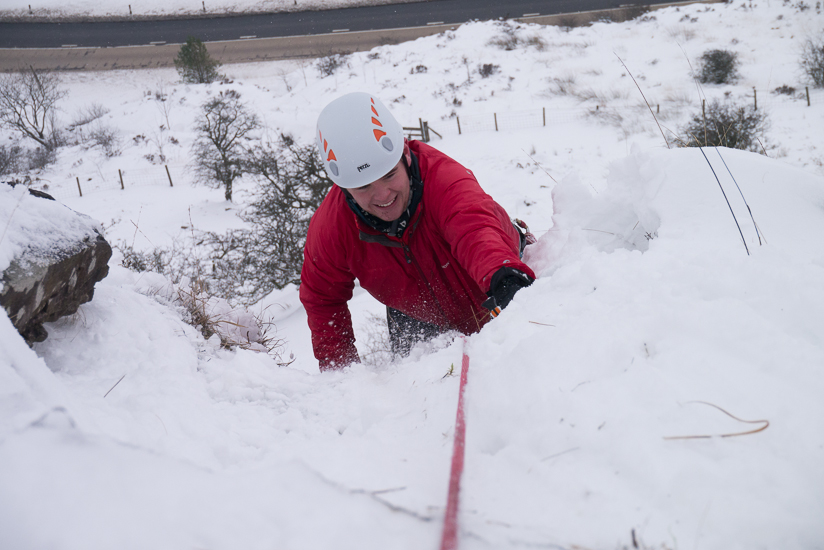 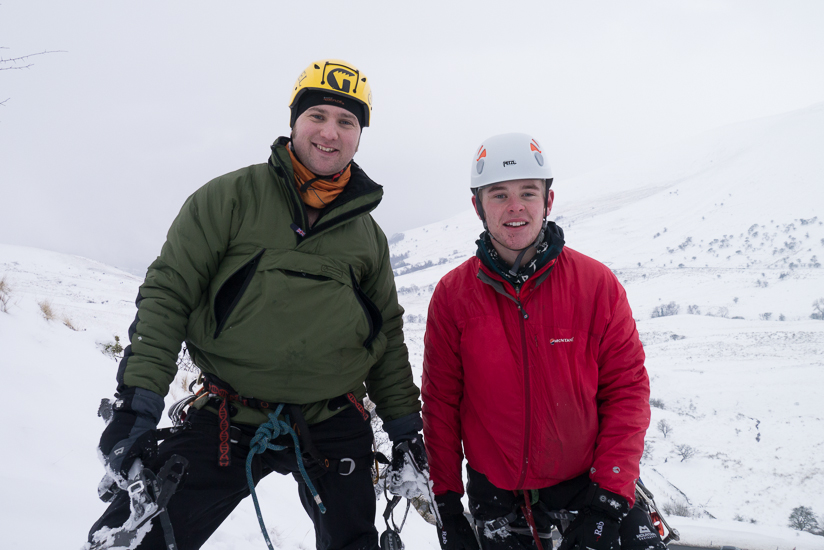 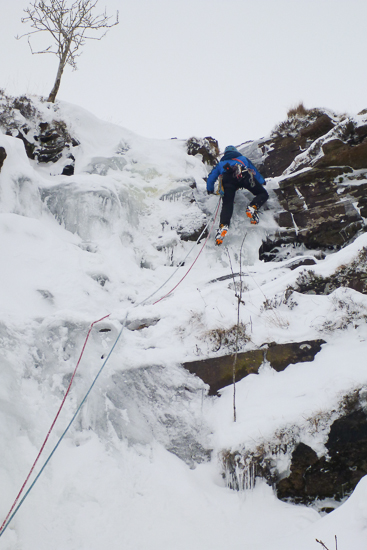 Me soloing the middle pitch of Craig y Fro 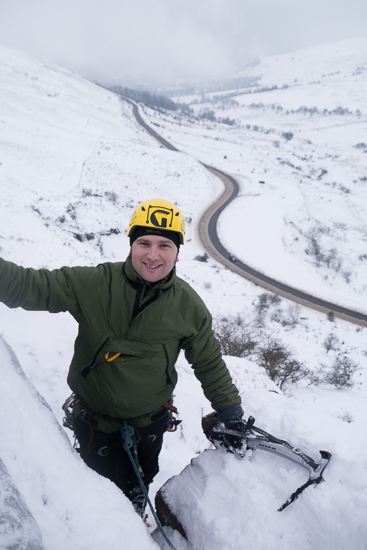 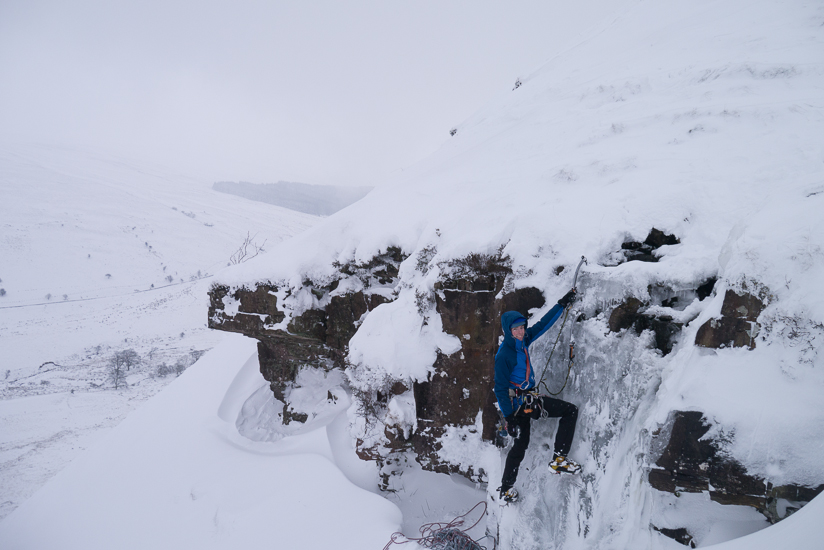 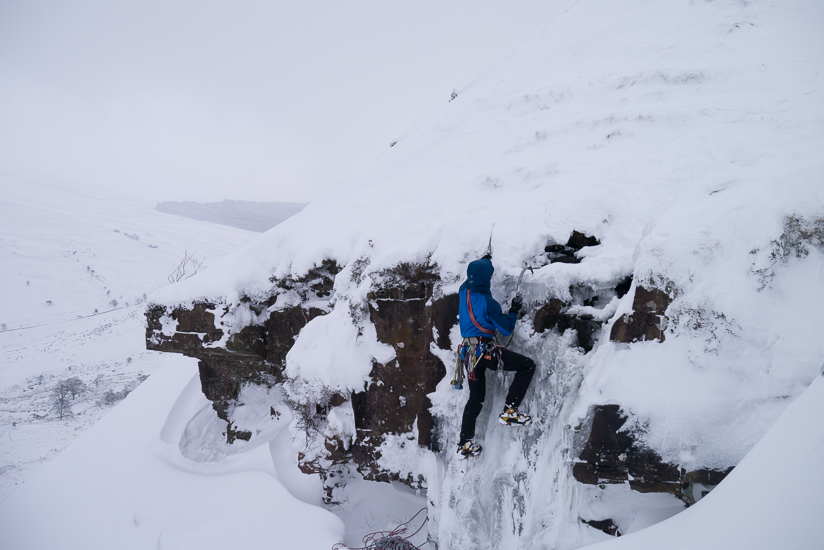 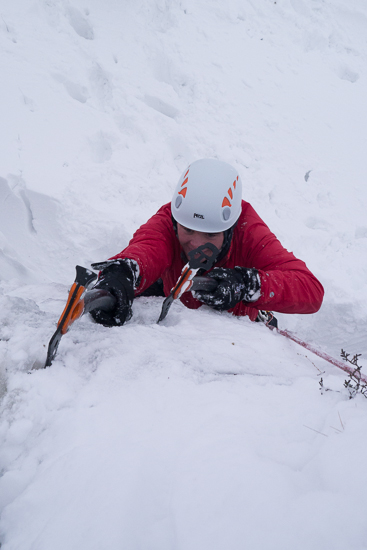 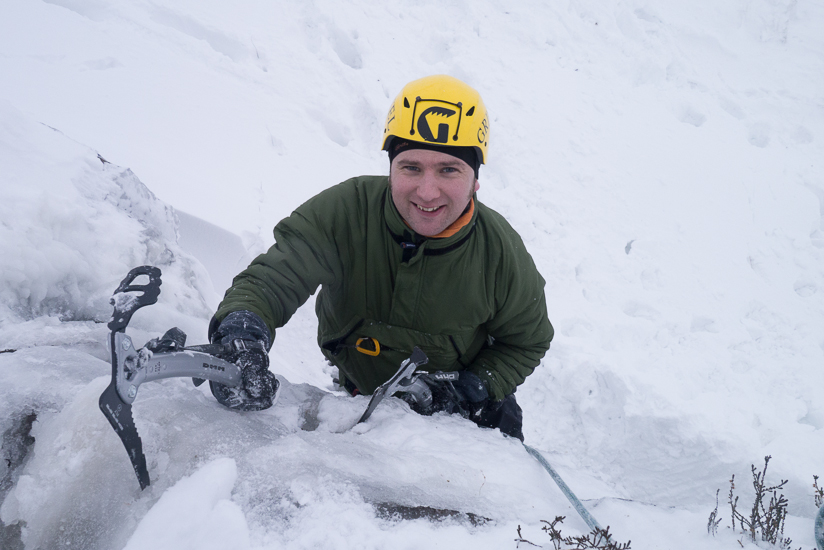 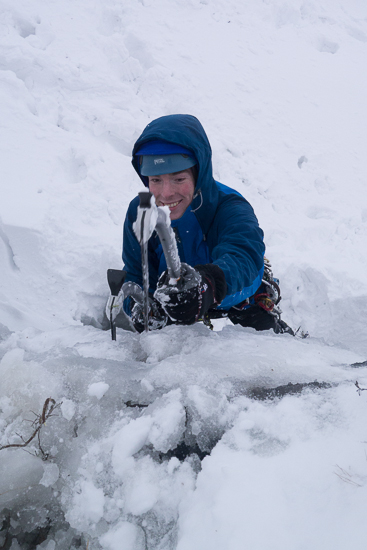 When we got back to the car I decided to head to RAC corner and have a look, it was looking fairly thin but with the thaw arriving on Friday I decided to have a go and see what it was like.  The first step up the ice was a decent thickness however there was nothing on the top out which made for an interesting rockover using body momentum, I then had a go at the right hand wall of the top section and got scared at the topout after the previous attempt as there was even less ice so down climbed. While down climbing the ice was making some rather alarming noises so wouldn’t recommend climbing this, the corner to the top however was great and a good way to finish another good days ice climbing. 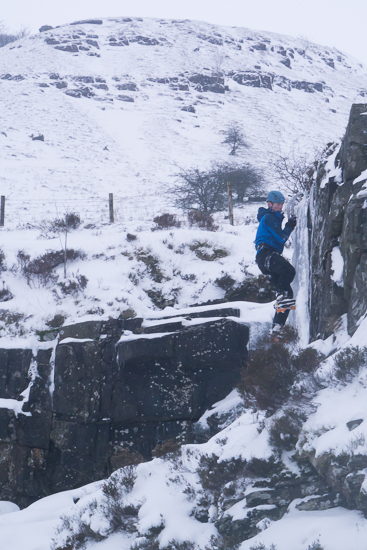 Me on RAC corner