With the recent cold snap there has been a lot of talk around down south about the beacons coming into winter condition. As I had holiday which I had to take before Christmas I took a punt at the start of the week and booked Thursday off as it was due to be the last cold day before the thaw. However when Wednesday night came reports were coming from locals who had been to scout out the conditions on Wednesday and it turned out that nothing was in good nick so rather than spending the day at home we headed up to Snowdonia for the day, this involved setting my alarm for 2:15! We arrived at Pen-y-Pass car park at around 7 with a beautiful starlit sky and started walking towards Trinity face along the miners track. It was a beautiful walk in as dawn broke and then as we were walking around the lakes the sunrise started with a beautiful horizon and the top of Snowdon being kissed by the sun, it definitely reminded me of alpine days. 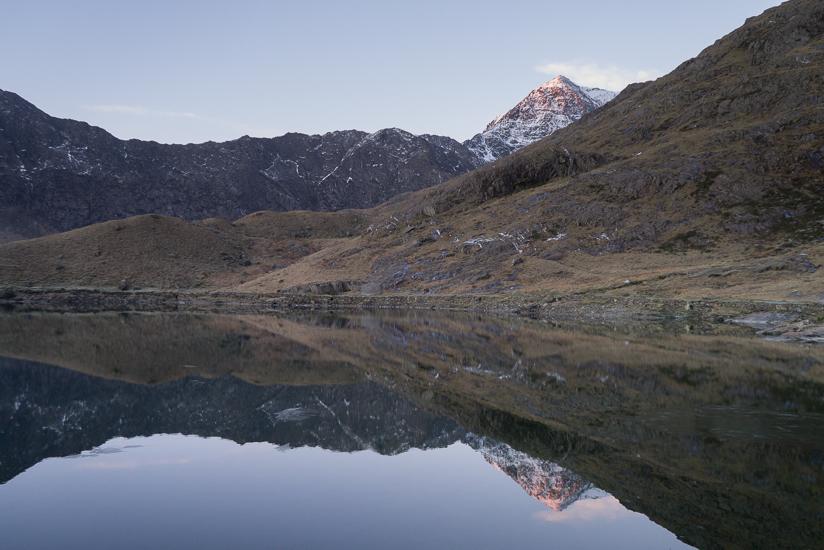 Snowdon from the miners track at sunrise 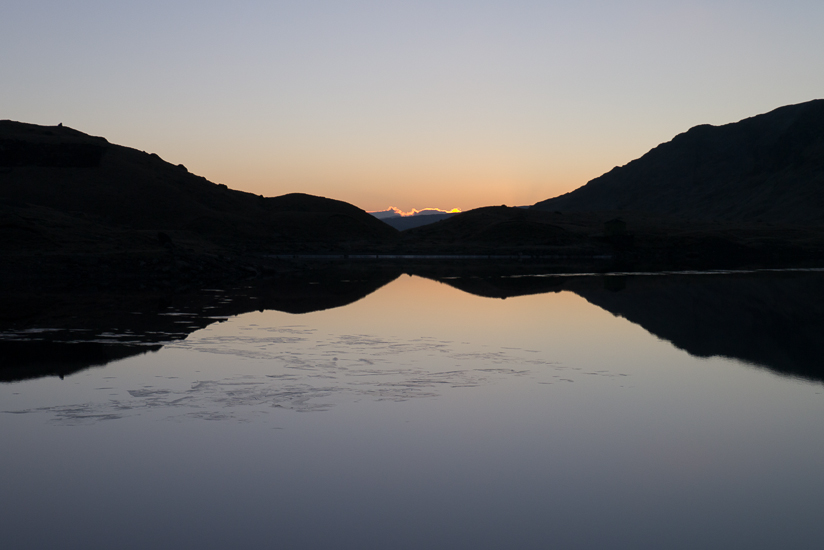 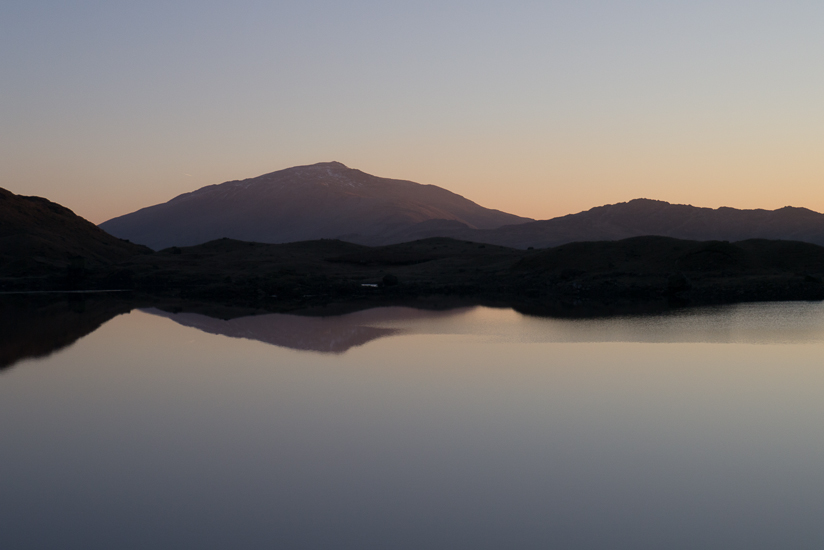 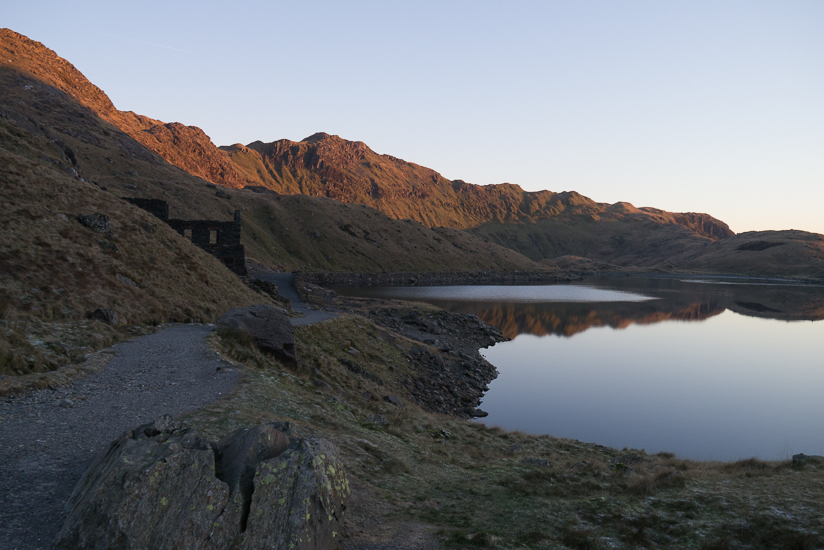 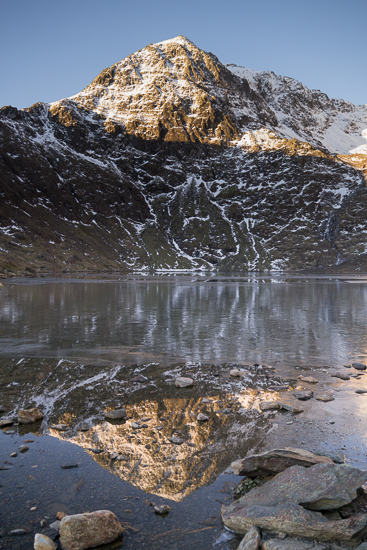 Once we got to Llyn Glaslyn we noticed the waterfall up to the corrie was frozen up so rather than going for the brutal ascent up to the Pyg track we climbed the waterfall. When we got to it we realised it wasn’t completely frozen but the ice that was there was mostly good and it was a great fun way up to the base of Trinity face and we only got slightly damp from the running water. 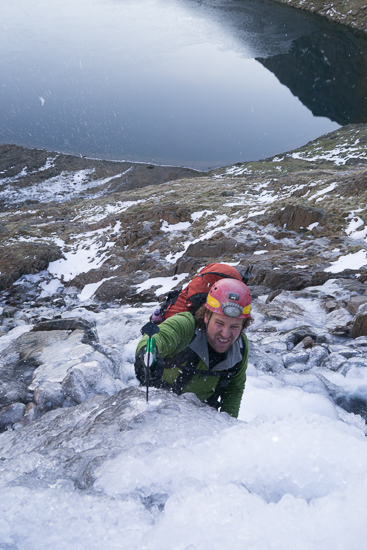 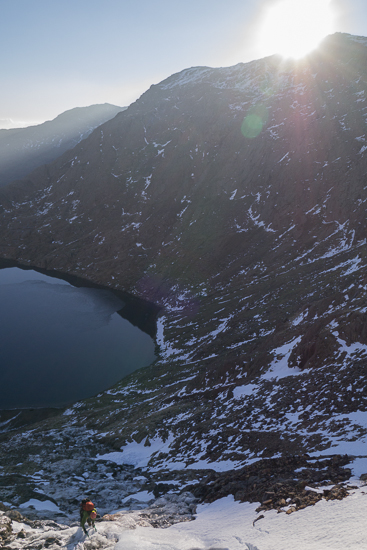 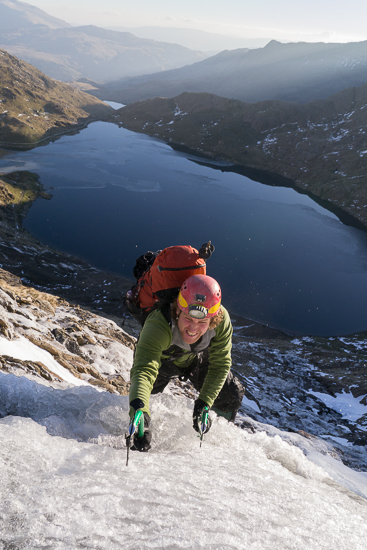 Once we got to the base of Trinity face we geared up quickly as other teams were arriving and we didn’t want to be queuing and headed over to Ladies Gully a grade III, 3 wintr climb with a fun middle ice pitch. The first pitch was grade 2 so we soloed up to the base of the grade 3 pitch before getting a rope out and climbing. I lead the pitch and it was fantastic with mostly good ice, although at times it was fairly runout and most of the ice screws I placed were for my head as they wouldn’t have held, but you must not fall off while winter climbing anyway… Unfortunately when we got to the middle of the first pitch I realised I didn’t have my camera so figured I must have left it where we kitten up, which means there are no photos of the climb.

Once we got to the top we admired the fantastic view which was cloudless in every direction, combined with lovely light and clear air was just amazing! After a bite to eat I left Jason taking photos and headed down to the base of Trinity face to get my camera with the aim of soloing back up Central Trinity a grade I/II route, but when I got to the base I changed my mind and decided to do the classic route Right Hand Trinity a grade II/III route due to reports of it being in great condition and how I found the previous route. However at the start of the gully I managed to take a left fork out of the gully as it looked like it went to the same place and left looked more fun, however this lead to Trinity Buttress a grade III, 3 climb which was fairly sustained up some very steep but great quality snow ice. Soloing up the climb certainly focused the mind, was great fun and I was loving it. I worked out very quickly what I was on so wasn’t worried about having left the gully and really didn’t want to down climb what I had just gone up. Once I got to the top my arms were aching, adrenalin was pumping though my body and it was an amazing feeling which I think I will remember for a long time.

The two routes I climbed on Trinity Face. Trinity Buttress on the left (III, 3, solo), Ladies Gully on the right (III, 3, Lead) 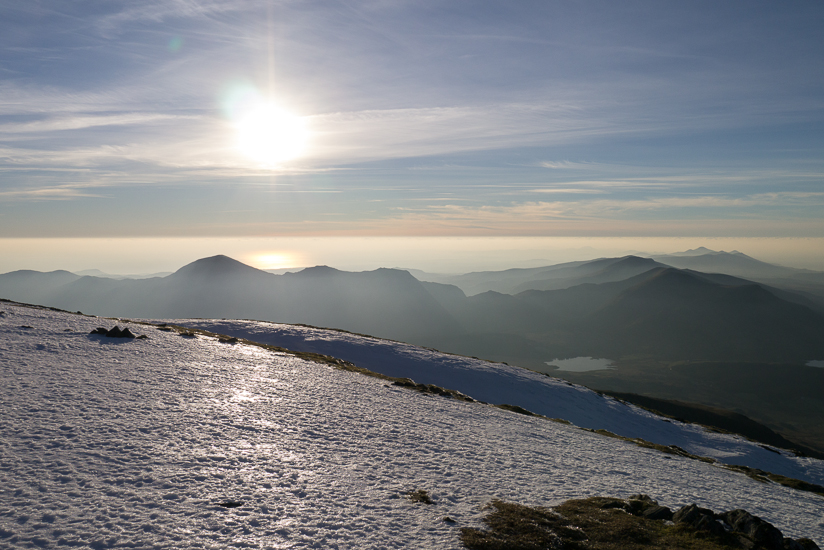 View out to sea from the summit 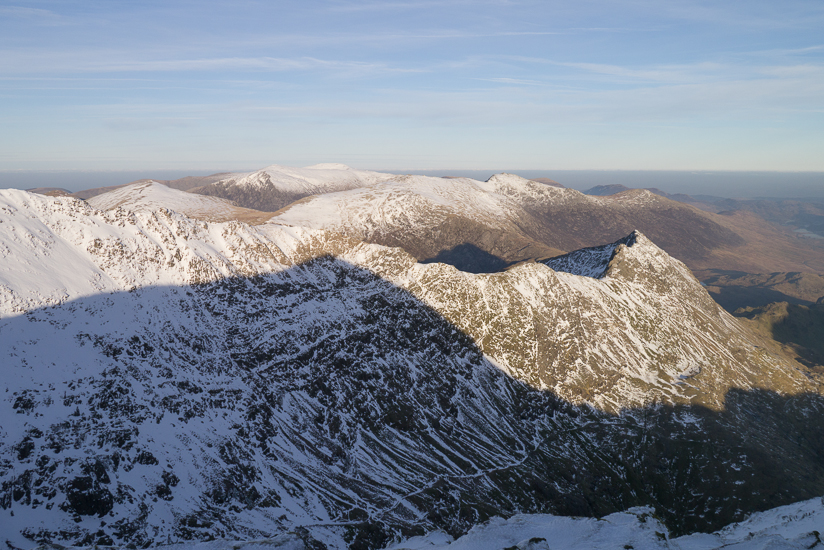 Stunning views over Crib Goch, the Glyders and the Carnedds 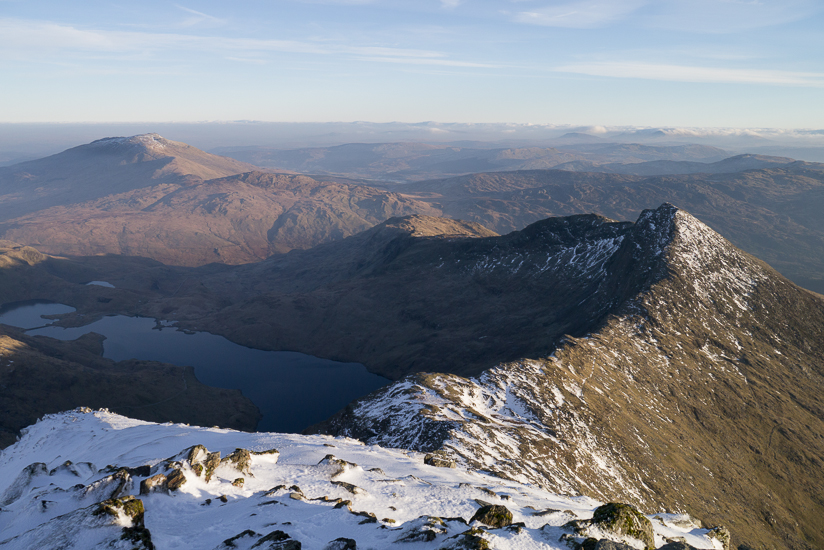 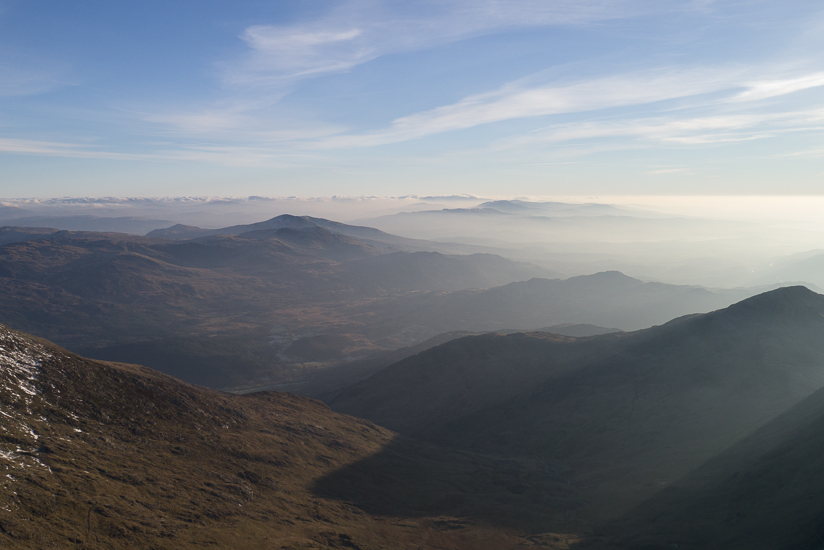 This time I had my camera so went to find Jason and took some photos. After a photo session we headed back to the car via Crib Goch which was lovely as the sun was setting over Snowdon and Trinity face. I discovered that in reverse the route finding along Crib Goch is a bit harder and every time I tried avoided a section I knew would have a trickle down climb I just ended up climbing up a harder way and having to do the down climb anyway despite knowing there was a way around. There was a slightly dissapointing amount of snow on the ridge itself but it was still great fun and definitely winter conditions. Thankfully the descent ridge was plastered in snow which made the descent quick as it was possible just to march down the snow, my crampons only came off at the bottom of the steep ridge. 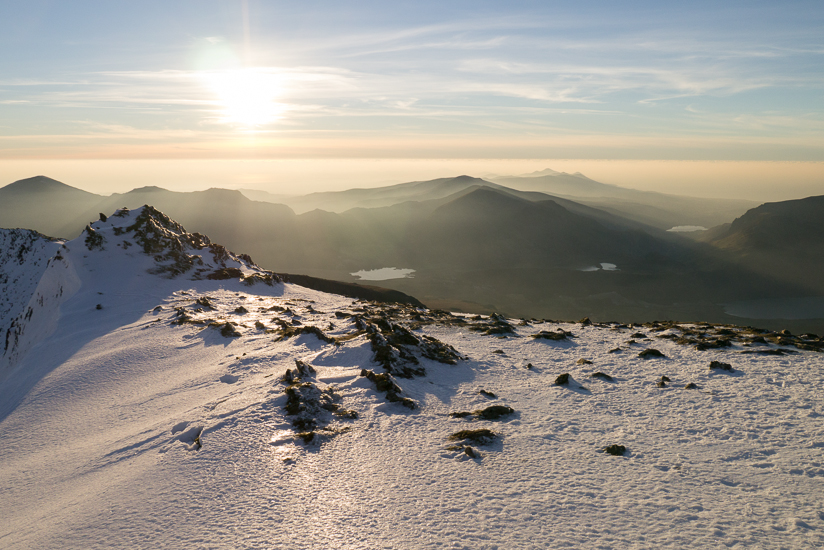 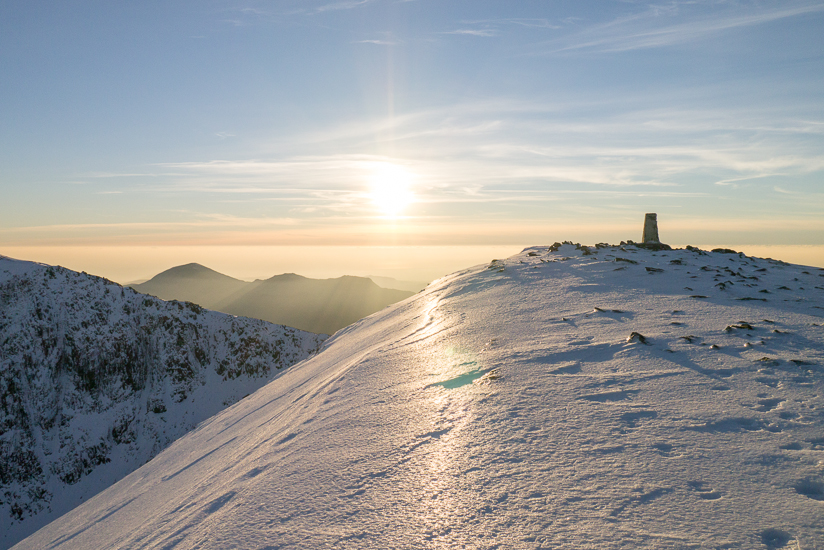 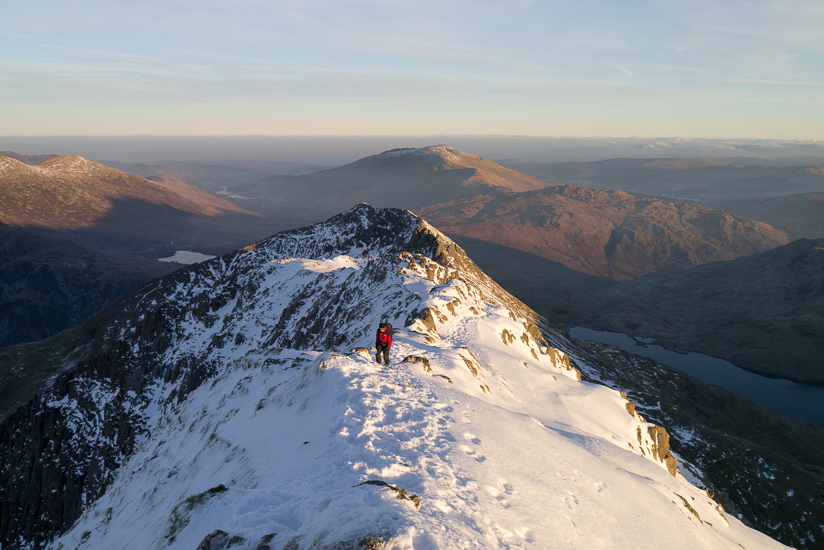 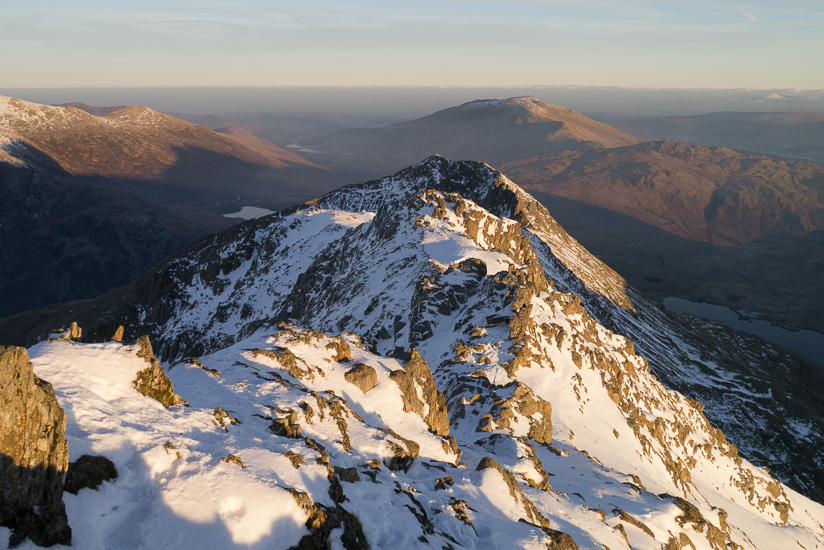 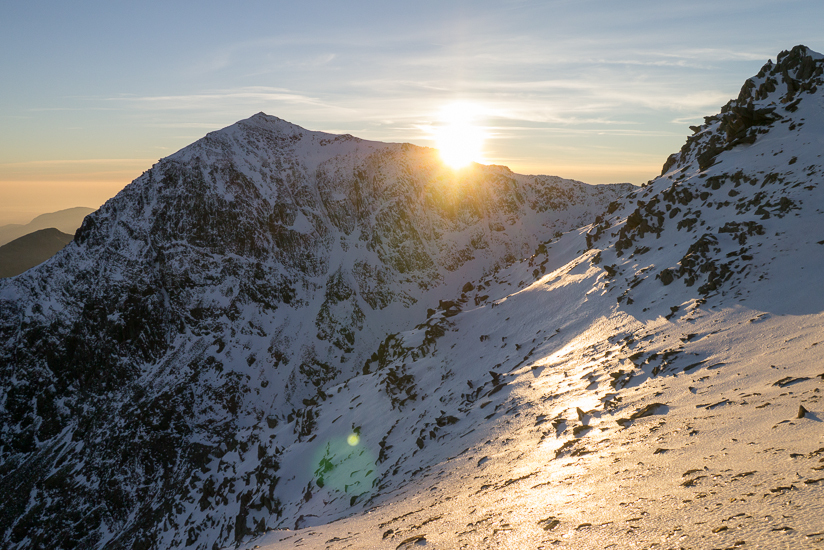 Sunset over Snowdon and Trinity Face

The walk back along the Pyg track while shattered and dehydrated in the dark was horrible and combined with how much ice was on the rocks made it even worse as you just had to look down for every step as it was impossible to see the ice until you were about to step on it. I was very relieved to get back to the car and after lots of fluid, sugar and a quick power nap set off on the drive back to Bristol. I finally got to bed 22hrs after I woke up shattered and not looking forward to my work alarm on Friday morning. Despite this it was so worth it and I can’t wait until the next time!