The main reason for me getting a SLR again was due to going evening with my sister and realising how much I missed equestrian photography. This weekend I had my first chance since getting my camera to get out and take pictures of people riding and it happened to be in the form of the North Herefordshire Hunt’s Opening Meet for the 2012 season of hunting.

The weather in the morning was brilliant blue skies after a night of rain with a bit of a winter chill in the air as well so it was looking like it should be a good day, and despite warming up significantly during the meet it was a very good day out. The stunning weather actually made photography fairly difficult in the morning with the very harsh winter light creating large shadows and very contrasty photos. 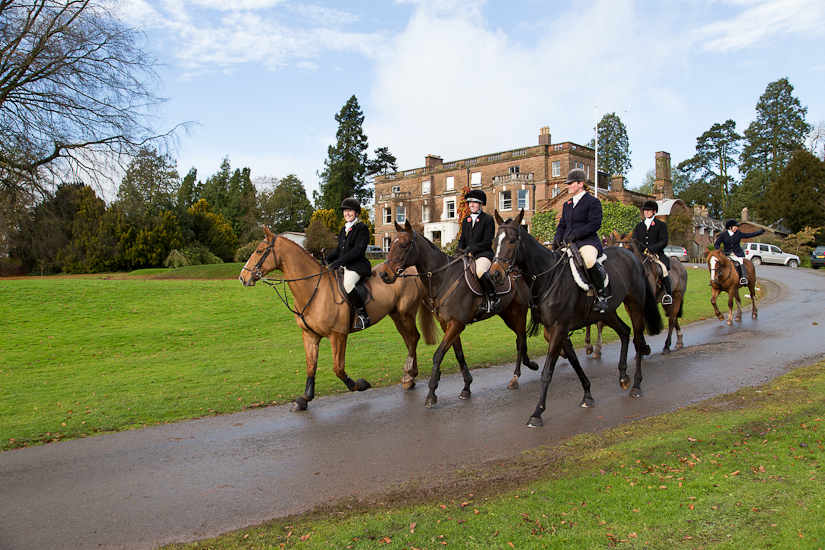 Arriving at the meet 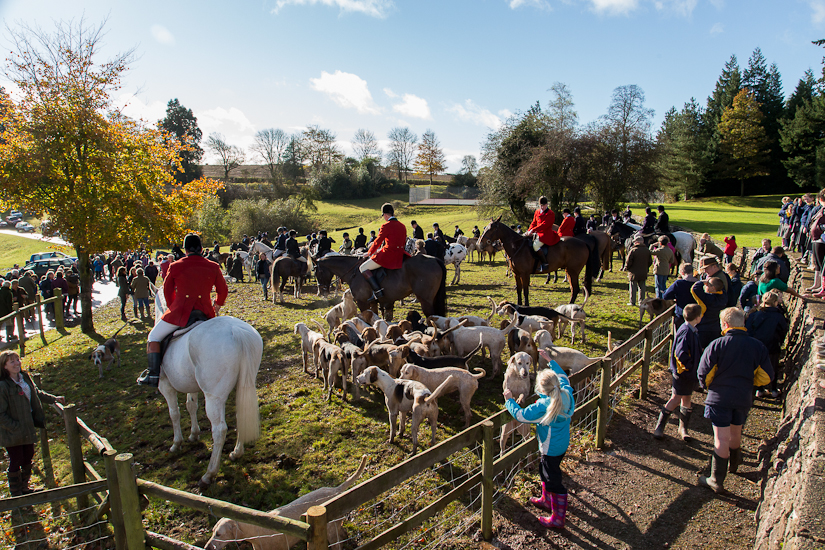 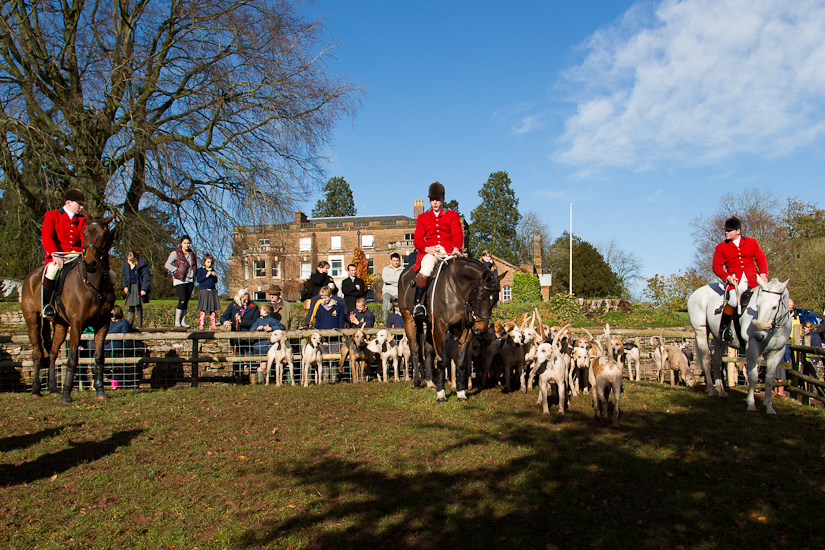 Hunt staff at the meet 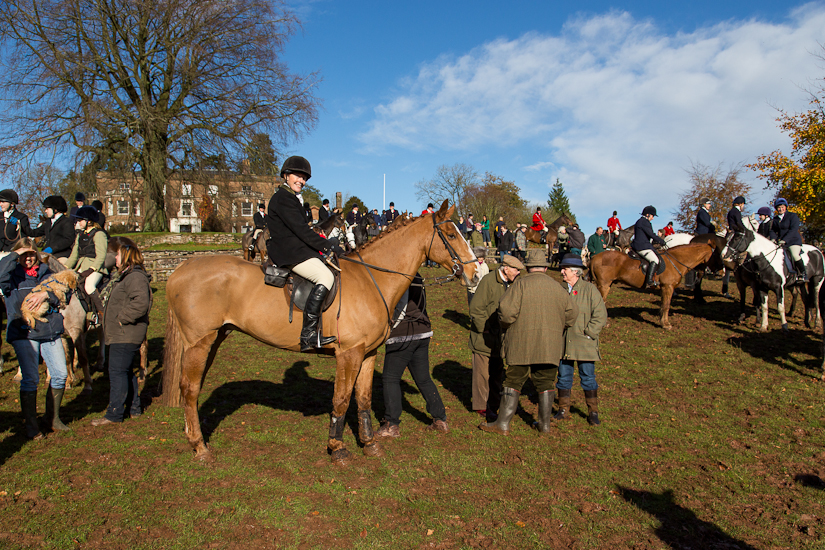 Mum on my old horse

There was a great turnout at the meet both on  horseback and on foot which was nice to see, after the speech from the hunt staff about how the hunting would be within the law of the hunting act by following a trail which was laid we headed off over the two standard jumps which are always jumped when the hunt meets at St Richards School. These jumps caused chaos as per usual with at least one person falling off, my sister somehow not falling off considering her horse ended up on his side with his legs in the air and multiple people stopping.

While the hounds drew some of the local covers the field  had some fun cantering around the field before following off into the distance, thankfully I knew the route which was going to be taken so cut the corner to get in front of the field before they got to one of the very few hedges which are jumpable in the North Hereford country. 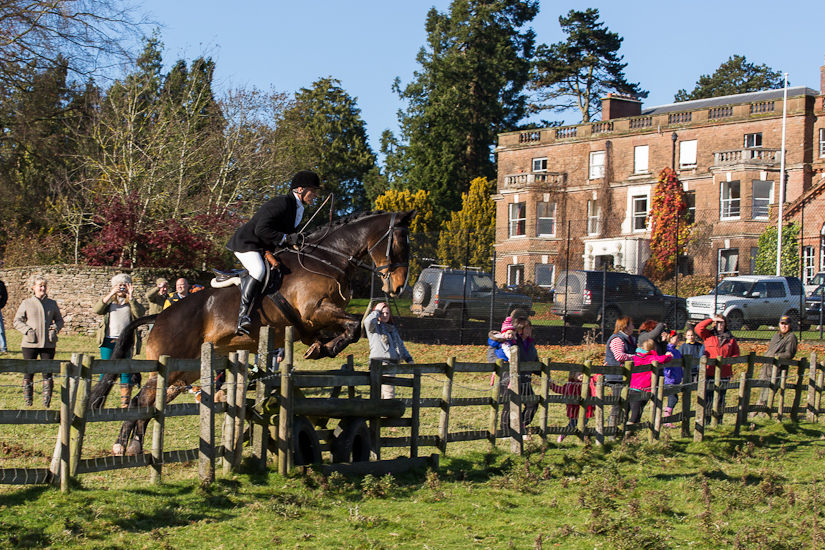 Jumping away from the meet 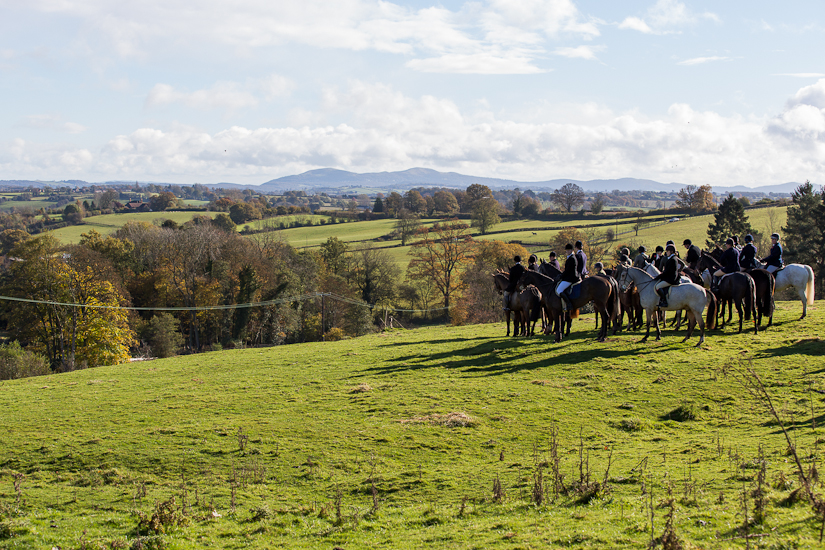 A moments rest with a lovely view 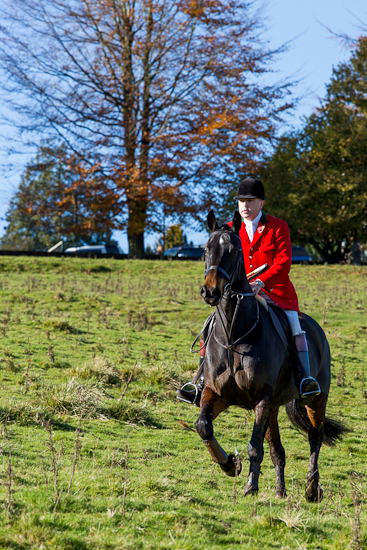 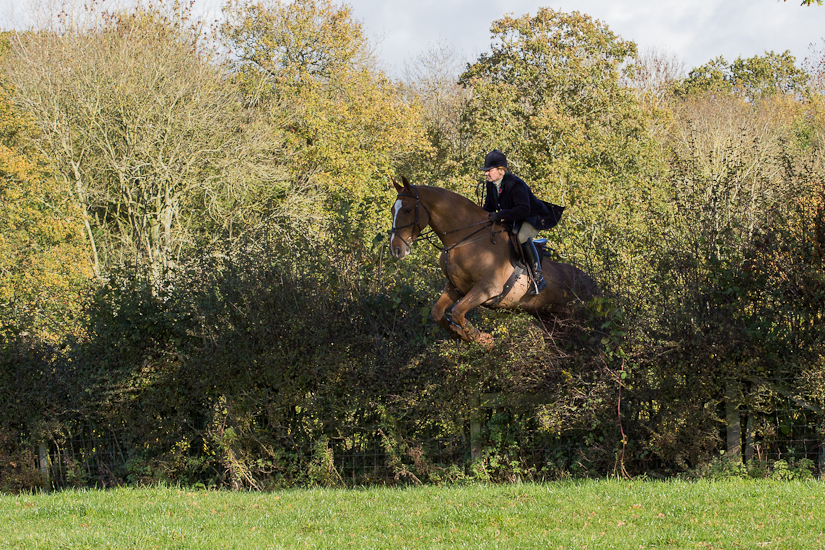 A hedge with some tricky light

Unfortunately the bright sunlight proved a pain again for the hedge as a large tree cast a shadow over the area which was jumped however everyone that jumped it did well with only one person taking a minor fall after landing, from which the girl was fine. After wading through some calf deep mud I caught up with the field again to enjoy one of the few rests they had the entire day. After this point the field precided to almost go in circles which involved going down into the valley, across a dingle which was often hard to cross on foot and back up the other side. This happened at least three times and when you are following on foot it gets tiring very quickly! It did enable me to get a set of photos of the field crossing a fairly traditional NHH dingle which can often be fairly exciting when the horses are all excited and having to wait as the horse in front crosses it before cantering off the other side. 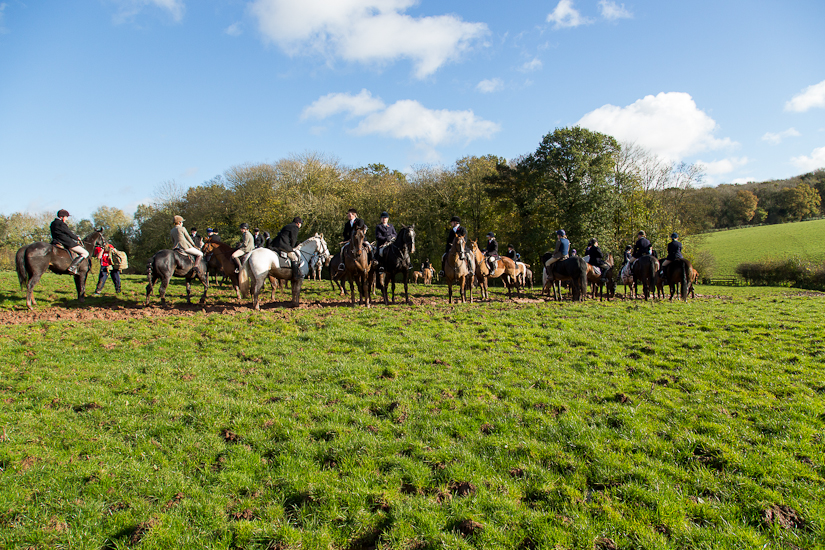 Another moments rest in the sun 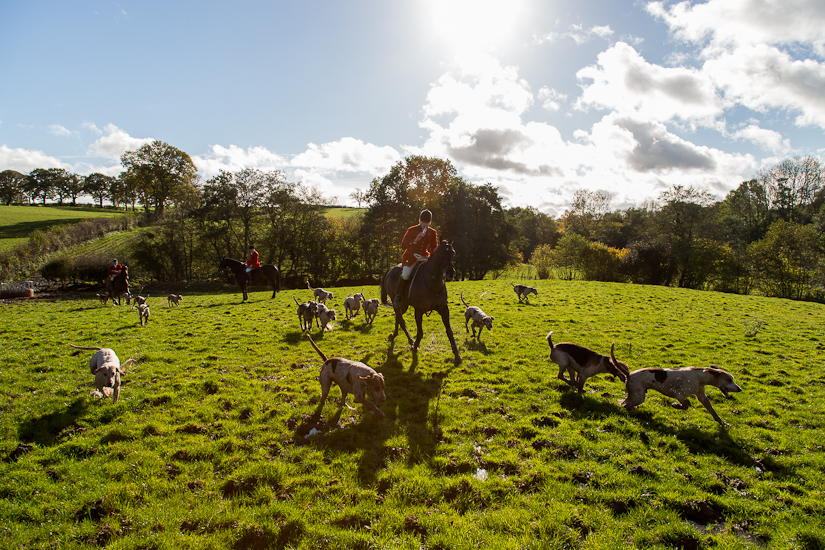 Huntsman calling back the hounds 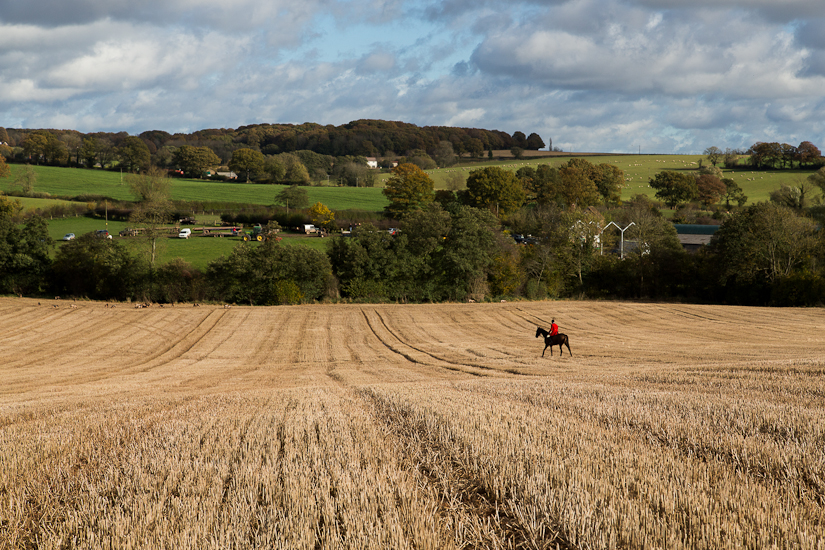 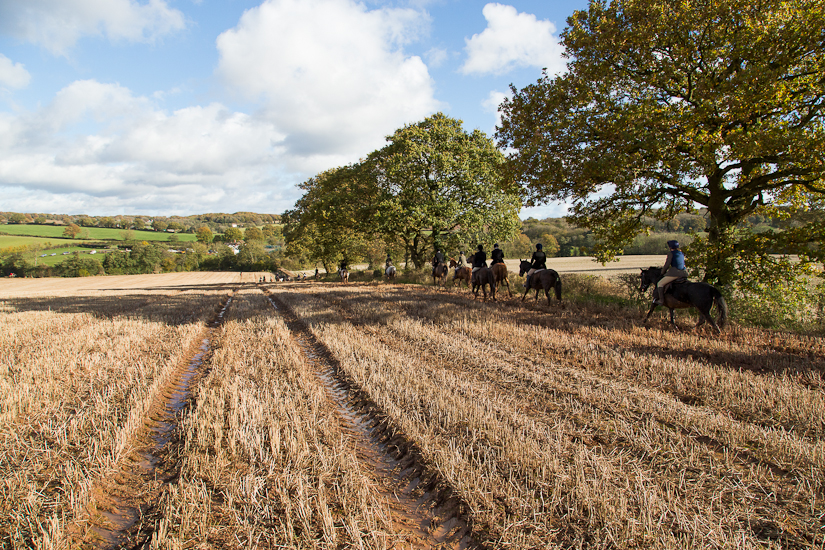 Field heading down to cross the dingle AGAIN! 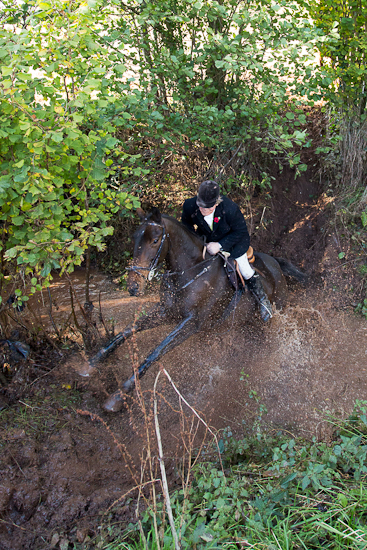 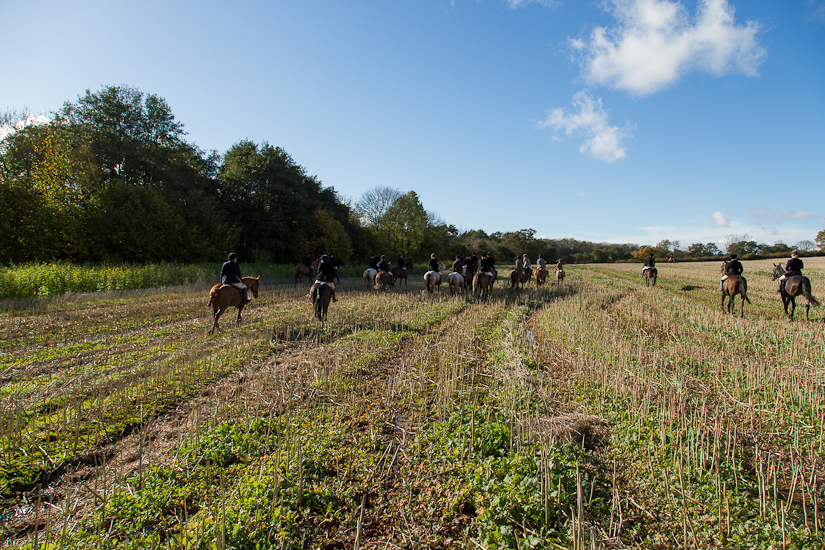 Relaxing walk across a stubble field 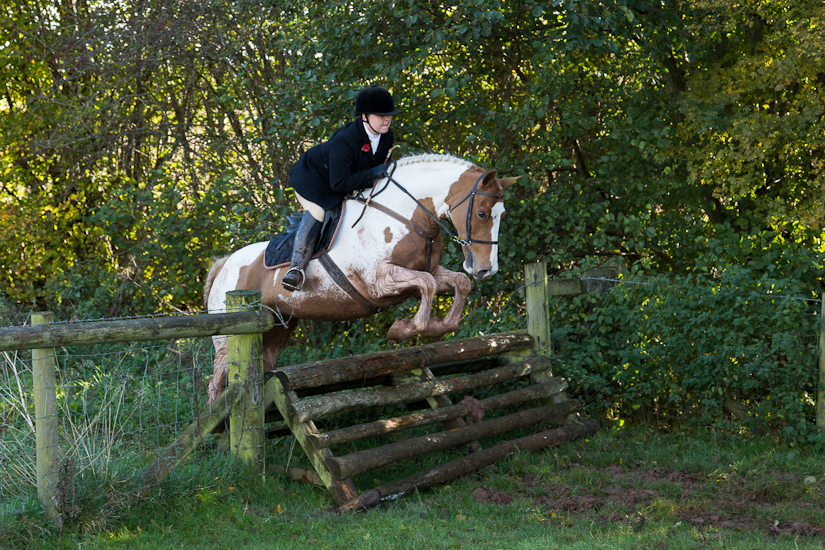 At this point I lost the hunt due to horses being significantly faster on foot and was rescued by someone following on foot before we caught up with the hunt again, at this point I was very tired and didn’t really want to do any more running over wet muddy ground so managed to hitch a lift on a quad bike which meant that I could follow the hunt and get some more photos but not have to do any exercise apart from opening and shutting gates. Crossing some of the muddy dingles certainly looked pretty exciting on the quad bike while watching from the side having opened the gates to access the crossing points. At the end of the day it started raining and as the hunt was heading in the direction of where they parked I left to head in the opposite direction back to where my car was, absolutely covered in mud and very tired! 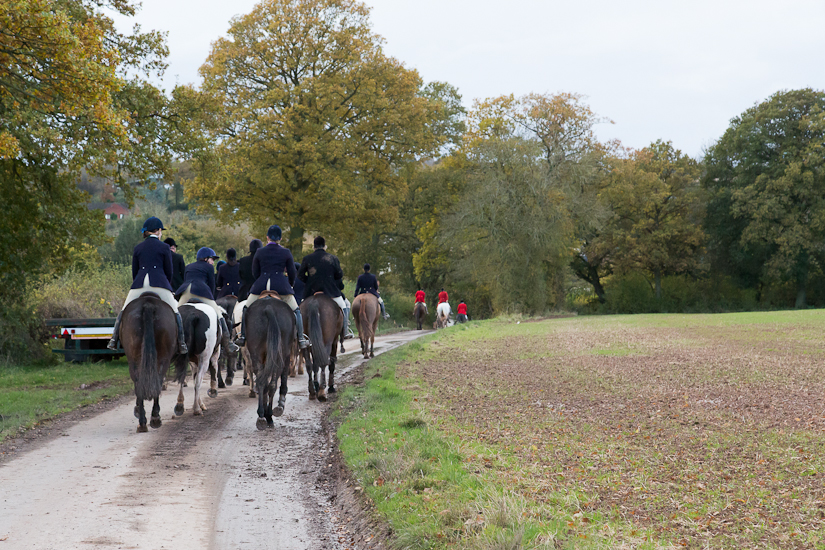 Heading back in the direction of the meet 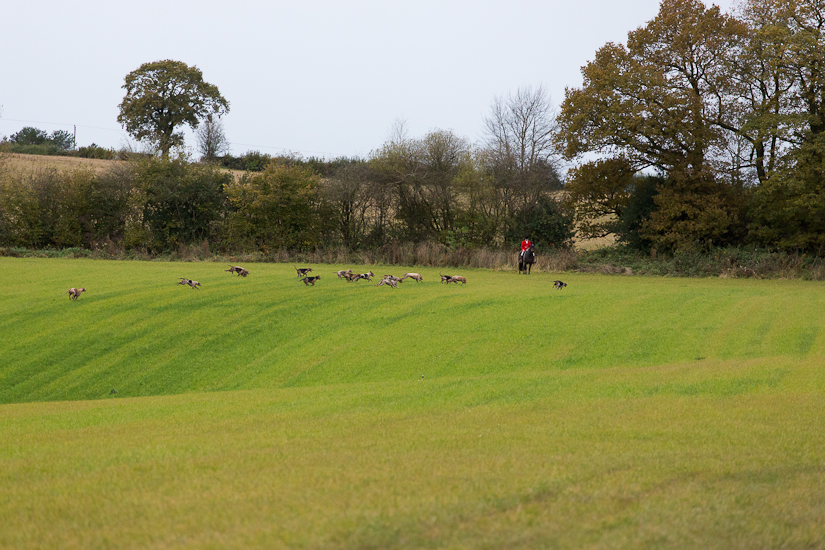 Hounds on a trail 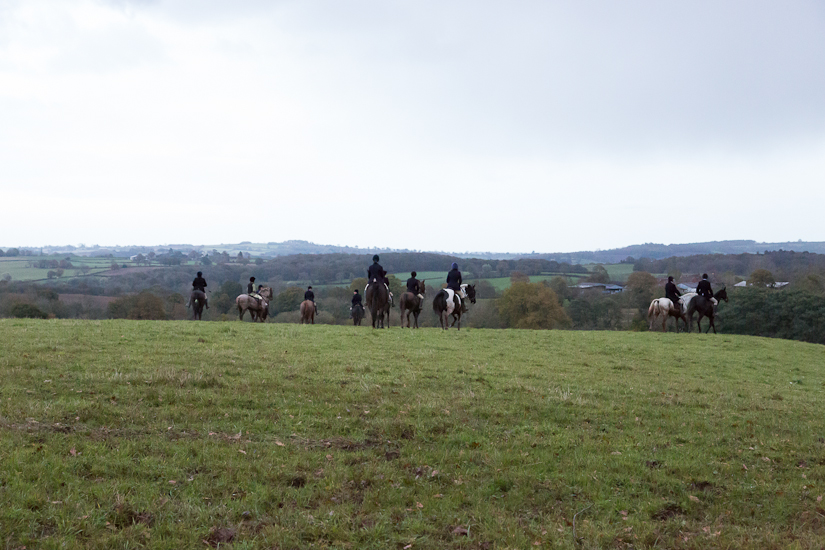 The photos which are in this blog post are the photos I decided I liked from the day which also tell the story of what happened. The rest of the photos can be viewed in my gallery and due to only being out for the enjoyment of taking photos I have decided to give all profits back to the hunt. As I was out for enjoyment I have not got photos of everyone so I apologise if I have missed you, but at times I was aiming for a specific photos and at times I was just to slow to get into position in time to photograph everyone. I am looking forward to being out again, though due to my very busy schedule I am unsure of exactly when it will be.