Climbing in the Peak District

This weekend I headed up to the Peak for my gritstone induction. I had mixed feelings about the climbing before I went due to knowing the climbing would all be very short, hard on the hands, run out and involve lots of jamming, although all these worries were quickly put to rest once I started climbing and realised that I really rather like grit! As well as being my grit induction it was also the first time I have been away with the Avon Mountaineering Club who I joined a couple of months ago and it was a fantastic weekend, so thanks to Becky for organising it!

The forecast for the weekend was a beautiful day on Saturday with a rainy day on Sunday so all the climbing for the weekend had to be done on the Saturday which meant a relatively early start leaving for the crag by 9. This would have been fine had it not been so cold, there was ice on the ground and all the turf was nicely frozen on the walk up to the crag in the wind, thankfully at the base of the crag we were sheltered from the wind and it was fairly pleasant, but belaying at the top was another matter! The view on the walk in with the crisp autumn sun was just fantastic and did make the cold worth it. 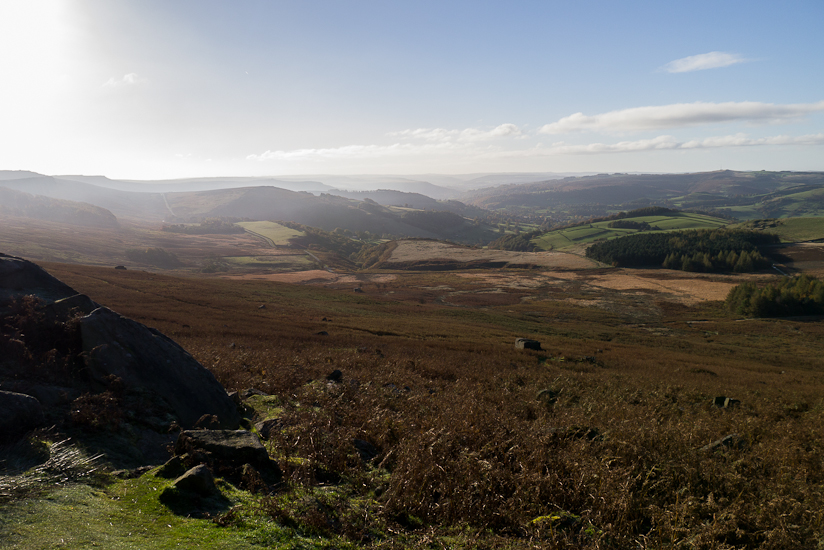 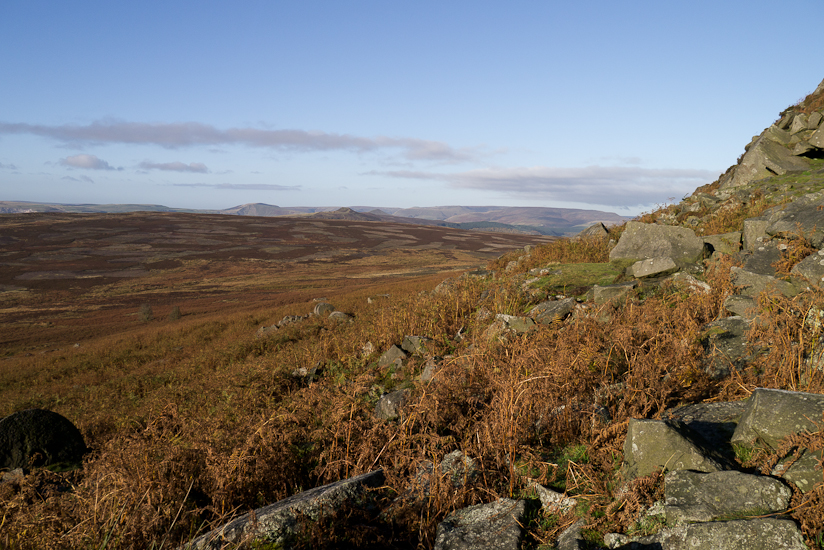 We headed for Stanage due to the massive amount of routes there and I felt like it was where I had to go having heard so much about it, we headed for High Neb to start with due to it having a three star VS called ‘High Neb Buttress’ for me to start on and an E2 roof called ‘Quietus’ for Nick to try. Once I got off the ground I quickly adapted to trusting the rounded grit holds which is pretty different to the crimpy limestone which I am used to, it was odd getting to the top of a route only having placed cams too!

After I had climbed Nigh Neb Buttress Nick psyched himself up for Quietus, an intimidating roof. After a fairly bold start with surprisingly tricky climbing Nick arrived at the roof, and it looked like it was going well as he stuck to the rock while horizontal, however upon reaching the crux, moving over the lip, Nick found his jamming wasn’t up to par and after a few attempts backed off. Once we had faffed with cleaning the roof we headed over to the Plantation. 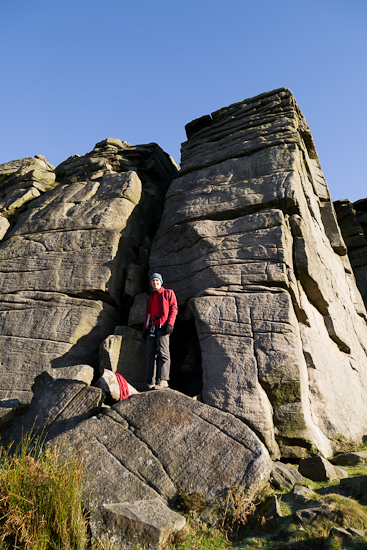 Cold at the start of the day 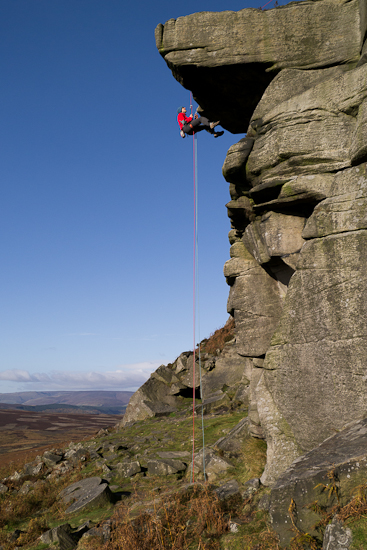 Retrieving gear from a failed attempt at Quietus

Having heard lots about The Right Unconquerable I was fairly nervous at the start of the route, however I didn’t need to be as I flew up the route with little difficulty using my recent wall fitness, having been indoor climbing twice a week for over a month now, and the techniques I have build up over the last 8 months. I was at the top of the climb, having done the hard bit, right? All I had to do now was bellyflop onto the ledge, this however did not go so well not being used to grit top-outs at all and it spat me back off due to me not getting my feet high enough before I started the bellyflop. I made it on the second go but was very frustrated to take a fall topping out after doing the hard climbing, oh well!

Because the climbing part of The Right Unconquerable went so well I thought while I was in the zone I would give ‘The Left Unconquerable’ an E1 5b a go, another layback flake which is slightly harder than The Right Unconquerable. The climbing was going great until I got to the crux and didn’t attack it quite confidently enough and barn-doored off the route, after a rest and with a more confident approach I managed it second time and reached the top very happy to have lead a grit E1 (admittedly with a fall) as my third ever grit route.

During the morning I had been thinking that soloing makes lots of sense at Stanage with shortish routes on grippy, solid rock so during lunch I decided to do my first solo route, a VDiff called Pillar Arete. It certainly makes you feel very alert climbing without a rope, but it is also very liberating not having to faff with a rope and rack, although it is not something I will be doing lots of! 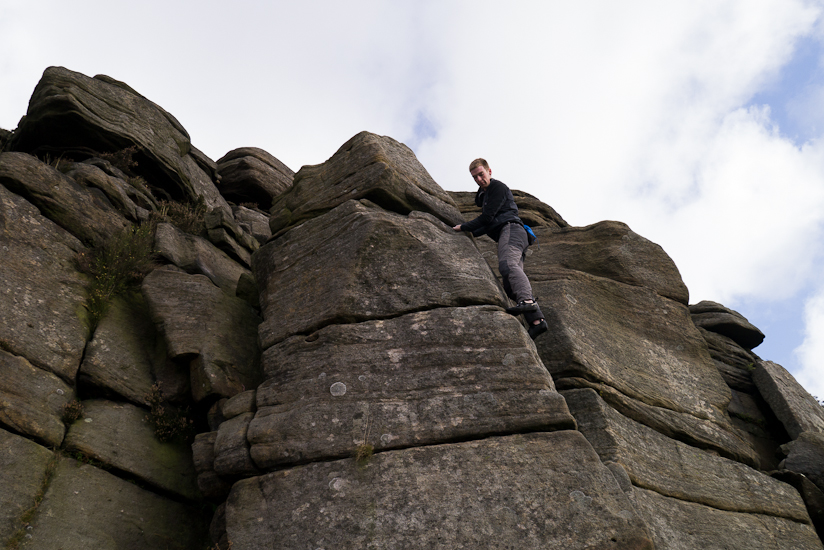 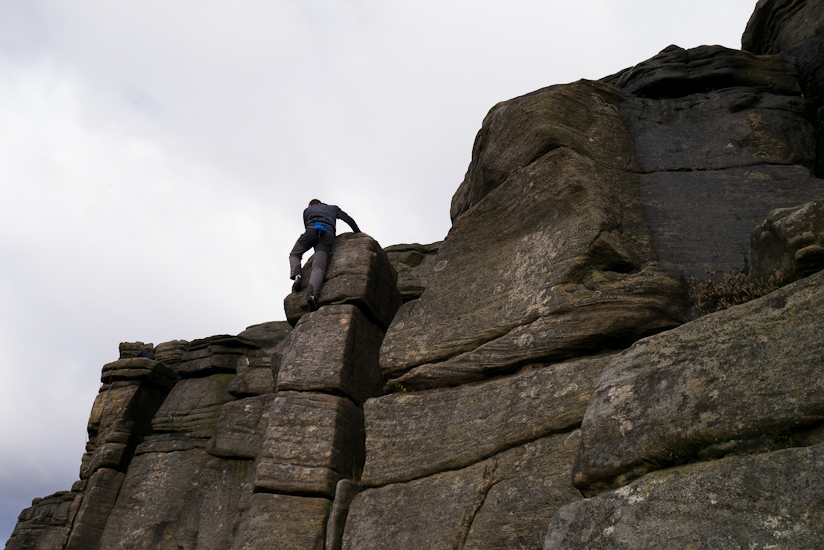 After lunch we headed back in the direction of the car stopping for another 3 routes and some bouldering. We started with Nick leading Millsom’s Minion which was a bold E1 5b with little gear for the crux which was high enough off the ground that you really wouldn’t want to fall off. It was a brilliant route to second though without the fear of a ground fall, might have to lead this one sometime. After this I went up Tower Face which was a HVS 5b, it was a fantastic route which deserves three stars, though how much longer it will be around I am not sure as the flakes were very loose. The crux of the route was a committing traverse right over a blank wall to another flake which certainly got the adrenalin flowing.

We finished the route climbing for the day with Nick leading Goliath’s Groove which is given HVS 5a, however the start of an offwidth crack which can either be bridged, laybacked or jammed with some odd techniques, or a mixture of all three. Nick didn’t make it look easy so I was a little apprehensive at the start however I think caving techniques helped as I managed to get a kind of foot/knee jam thing for one of my feet, which combined with a layback worked really well to wriggle up the crack without too much difficulty, was glad not to be on the sharp end though! Once the initial grove had succumbed the rest of the route was simple to get to the top.

After this we were both happy not to do any more routes due to getting tired and it being late in the day but were both up for some bouldering, so we went in search of a group with a mat and found a group from Nottingham Uni who accommodated us. We started with Crescent Arete which was given V2 5b. It was my first highball boulder problem, and it certainly got the adrenalin flowing as above half way up you really didn’t want to be falling off! Thankfully no one needed to test the bouldering pads efficiency and we all got to the top without making it look too difficult. After this we moved around the corner and climbed Crescent Wall a V1 5c problem. It turned out to be much more of a struggle than the previous route and after some beta about a high heel hook (same height as hands were at!) myself and Nick managed to get up it just before we packed up and headed home with a lovely walk along Stanage edge as the sun was setting. 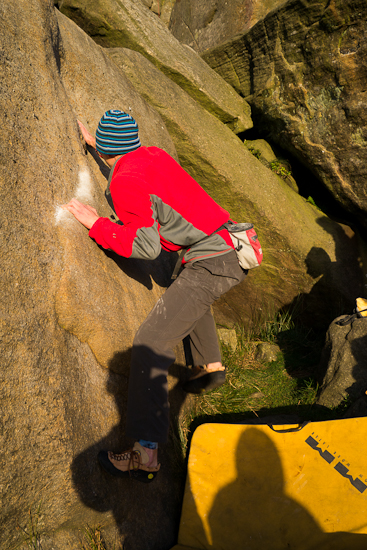 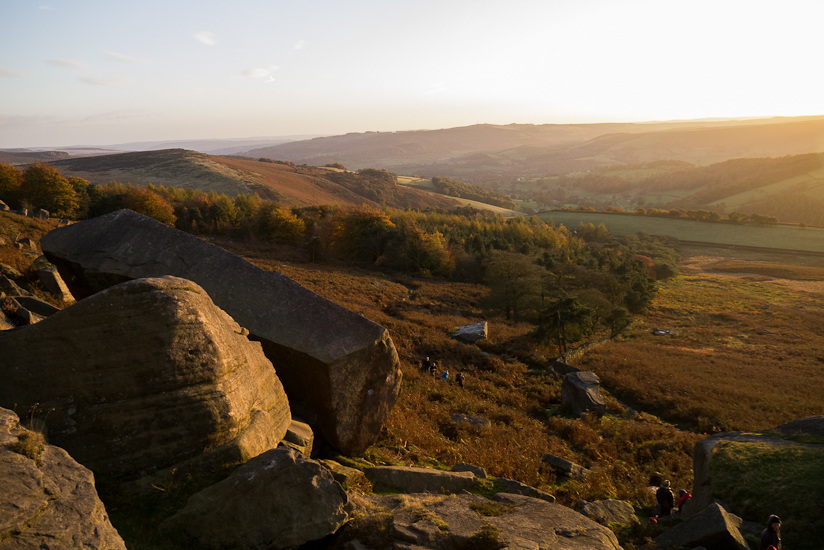 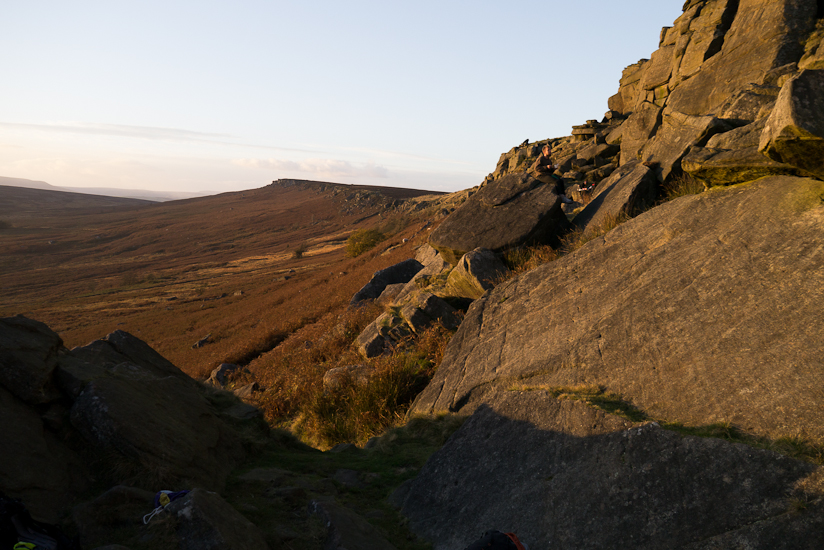 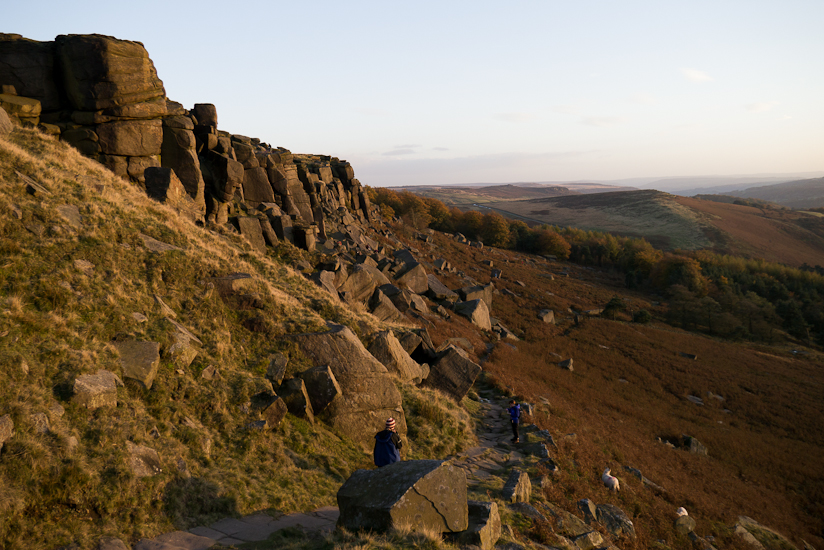 Lovely Sunset over the plantation

I had a fantastic time at Stanage and am now looking forward to my next trip to the Peak whenever that my be for some more grit climbing and bouldering, I suspect it will be next spring as I think it will be getting too cold for trad climbing soon, I certainly wouldn’t want it to be any colder than it was at the start of the morning! And I am fairly booked up until Christmas so probably don’t have time anyway. I would have liked to get more photos but due to hard climbing I couldn’t take photos while belaying, might go as a group of three next time so I can take photos from the side as you would be able to get some great photos on some routes from the top looking across.