On Monday I start working at Rolls-Royce so I have been making the most of the last few weeks where I am free to go off climbing whenever the weather allows. Due to lots of unsettled weather over the past week I have been on two day trips to venues slightly further away than most people would call day trips as last week I headed down to Swanage in Dorset and yesterday headed to Baggy Point in North Devon both of which are around a 2.5 hour drive from Bristol.

On arriving at Swanage we headed straight to the Boulder Ruckle which is approached by a very committing 40m free hanging abseil, which was made even more committing due to the fact that with high tide and the swell the easiest route out was the route I was planning on climbing combined with the fact that we were the only people there.

The first route that we climbed was Lightning Wall a HVS 5a, the climb went up a groove to a huge overhang which was then avoided by traversing left to a line of weakness and some very committing moves up before moving right on a very airy traverse. Before the moves up I took a rest due to there being chalk everywhere and two different lines which could be taken. The traverse was incredibly airy as it was above a huge overhang and there was not much gear apart from the two dodgy micro wires that I managed to place. It was a fantastic climb and by the time I got to the top my arms were feeling a bit tired but was glad to have got there with only one rest due to a fair amount of tricky and sustained climbing up the 40m pitch. 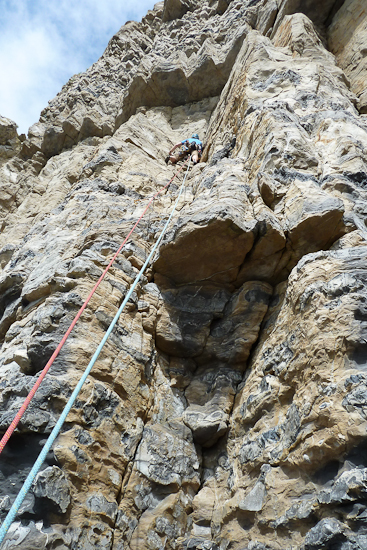 Approaching the Roof on Lightning Wall 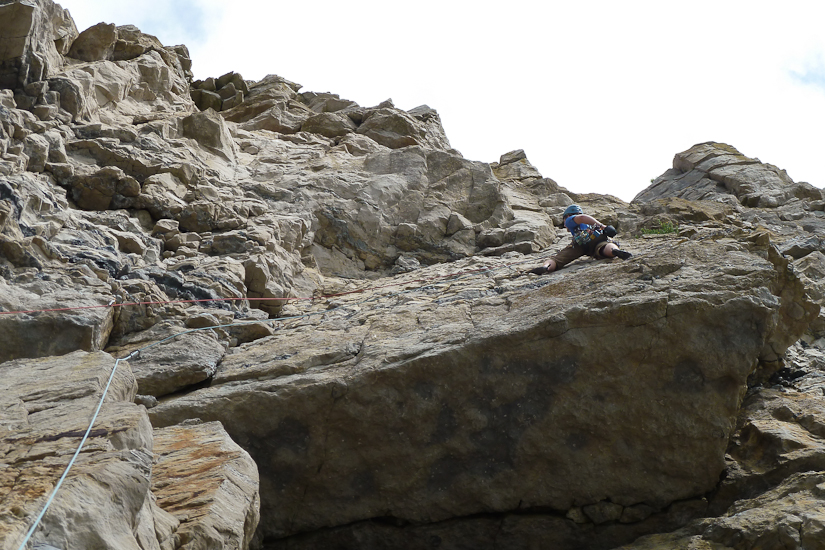 On the bold traverse on Lightning Wall

After some food and drink we headed over to Subliminal which is much shorter single pitch climbing in a much less serious position with a large non tidal ledge and lots of other people. This didn’t go quite to plan though as we started on a HVS corner called ,Transcript Direct’ though due to it being damp and not seeing an obvious line decided to back off and climb something else. After this I climbed ‘Spreadeagle’ which in theory was a VS 4c but it felt more like HVS 4c to me due to being fairly runout on some of the technical sections with only microwire protection. The climbing was fantastic though! This problem kept appearing for the rest of the day as mum climbed ‘Balcony’ which was a HS 4b but was very good value at that. To finish the day we went to climb the three star VS called Freeda, though after struggling up the initial crack got to the runout section of slab and decided I didn’t want to fall from it so escaped left onto another climb. 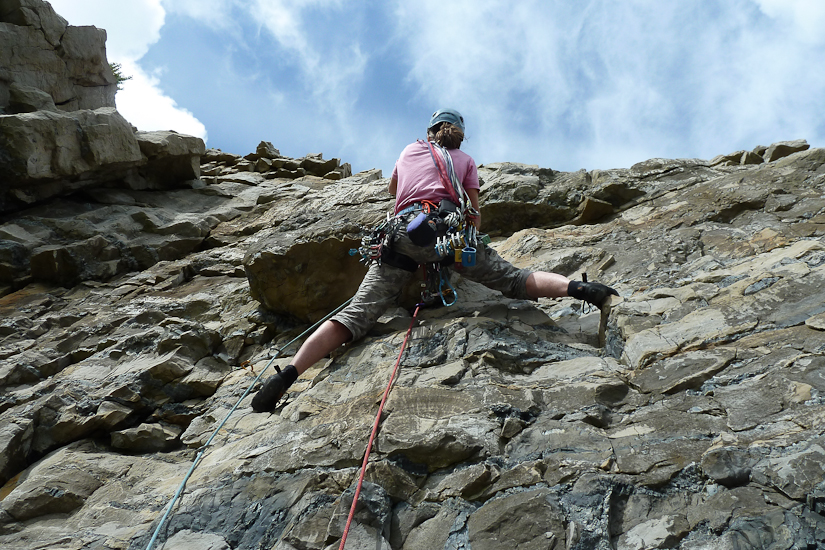 When I left Swanage I wasn’t particularly impressed by it, but with further thought I loved climbing at the Boulder Ruckle and it was just the climbing at ‘Subliminal’ that I didn’t like and thought was all undergraded, so at some point I am sure I will be back but probably not with Subliminal on my hit list.

Yesterday was forecast to be stunning so we headed down to Baggy Point in North Devon for some slab climbing which is something I have done very little of, and all that I have done was at a low grade.

We got there at high tide so decided to link two classic routes of the Promontory, Kinkyboots and Midnight Cowboy. The start of Kinkyboots was very exciting as it involved intentionally falling across the zawn to reach handholds before moving across it and traversing easily but very boldly along the slab to the combined belay of Kinkyboots and Midnight Cowboy. The second pitch of Midnight Cowboy was a great traverse along the huge overlap after first climbing up rightwards before down climbing to below e overlap which relied on lots of smearing on the slab and quickly taught me to trust the grippy sandstone. The conditions on the climb were stunning as we were out of the wind, had a high tide below us rather than rocks as you would have at low tide and were baking in the sun. 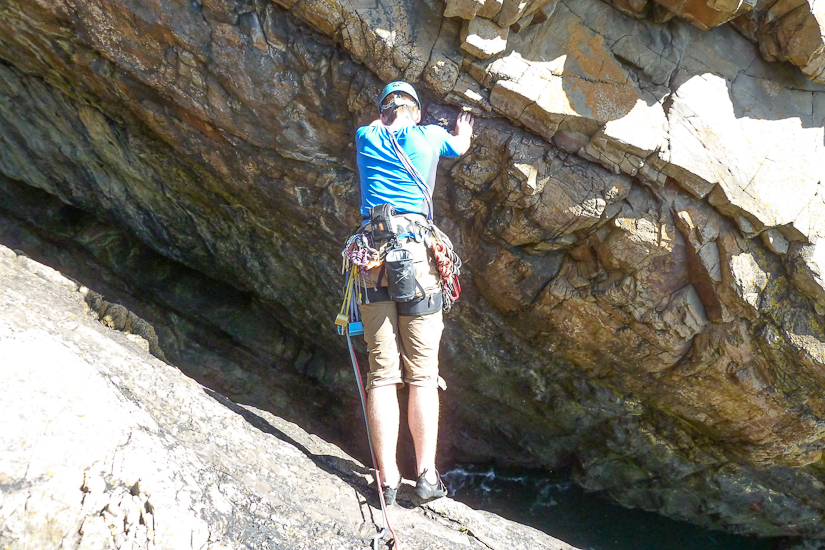 ‘The Move’ Falling across the zawn 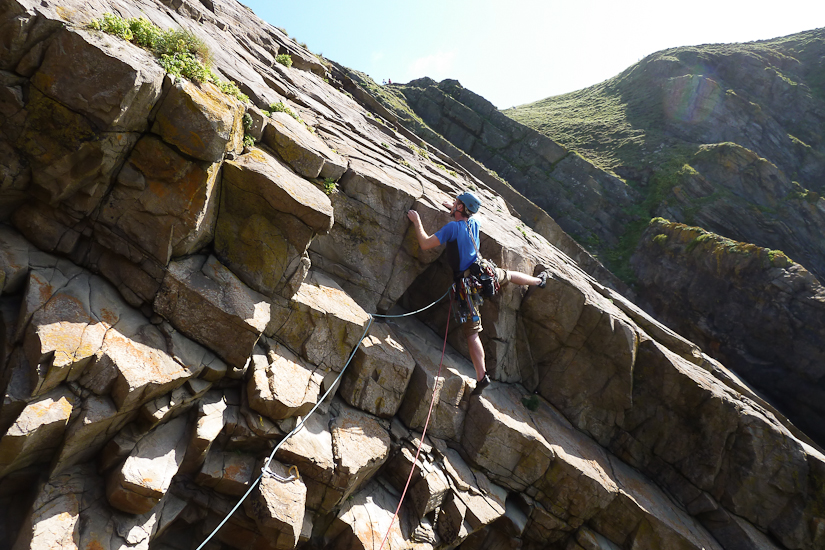 Tricky move up onto the Slab 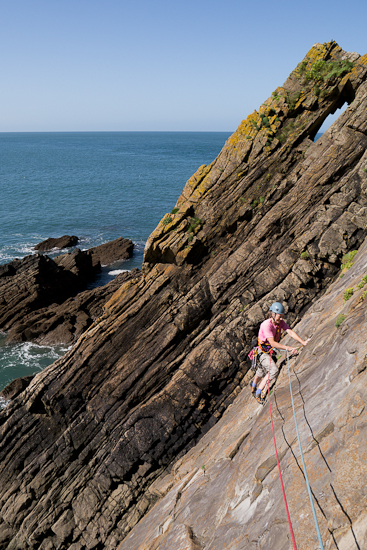 Approaching the easy but bold traverse 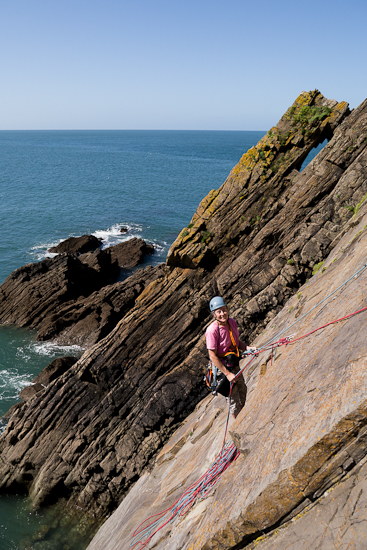 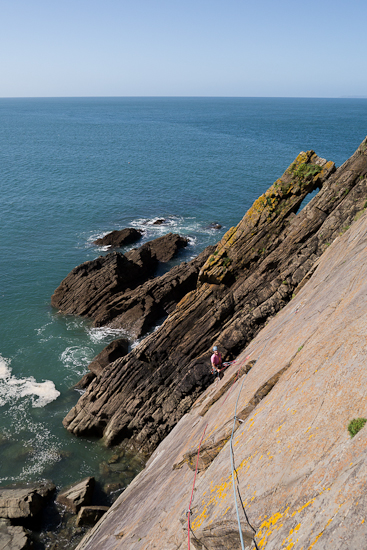 View back along the overlap

After some lunch we headed over to the Long Rock slab which is home to some classic routes, while we were gearing up and debating which route to do we were buzzed by a Sea King. In the end we decided to start on Pickpocket which turned out to be one of my favourite climbs that I have ever done. It involved an easy climb up to an overhang which was then avoided by an exciting traverse right before an intriguing move up to a pocket where my hand and foot were on the same hold at one point! After this there was a fantastic traverse along a rising break to the left before taking a line of weakness right to the top. The entire time on the climb I was grinning and loving it and wished it carried on for longer, though it wouldn’t have been possible as it was a 45m pitch! 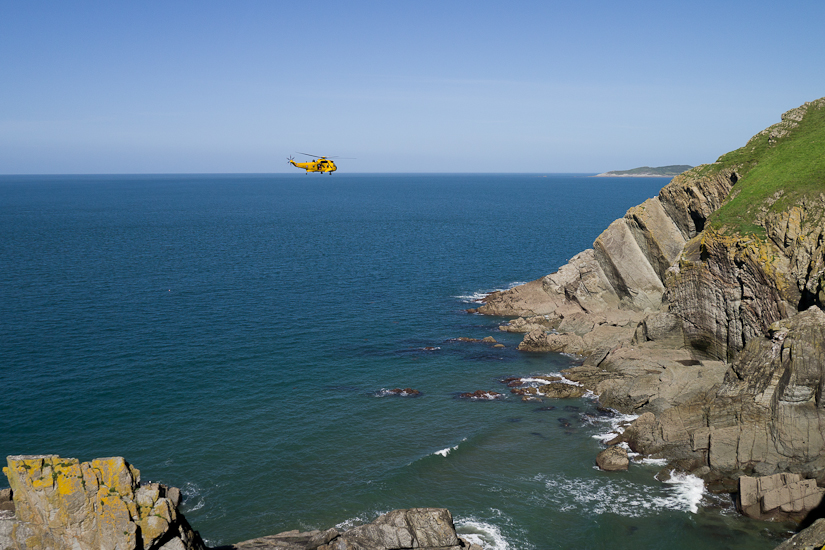 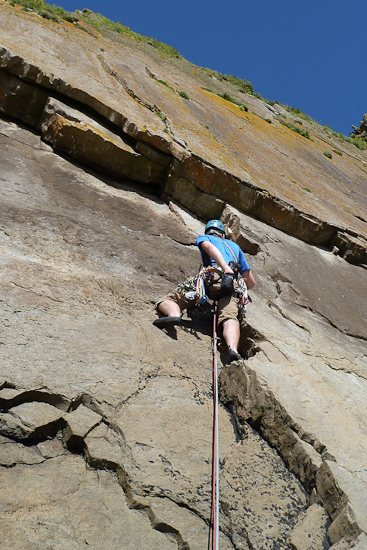 Approaching the roof on Pickpocket

By the time we had finished Pickpocket there was time for one more climb so we abseiled back down to climb Lost Horizons the classic VS of the slab, as it was a hot day and we had been slab climbing all day my toes were starting to get sore so decided to leave my boots off as long as possible so abseiled down the slab in bare feet. Sitting at the base of the slab belaying was a fantastic place to be as it was again out the wind in the sun with a stunning view over the sea. While mum was climbing we had another flyby but this time it was from a Chinook. Soon it was my turn to follow the obvious system of cracks to the top which was some really fantastic climbing, though the foot jams in the cracks were painful after the entire day of slab climbing! 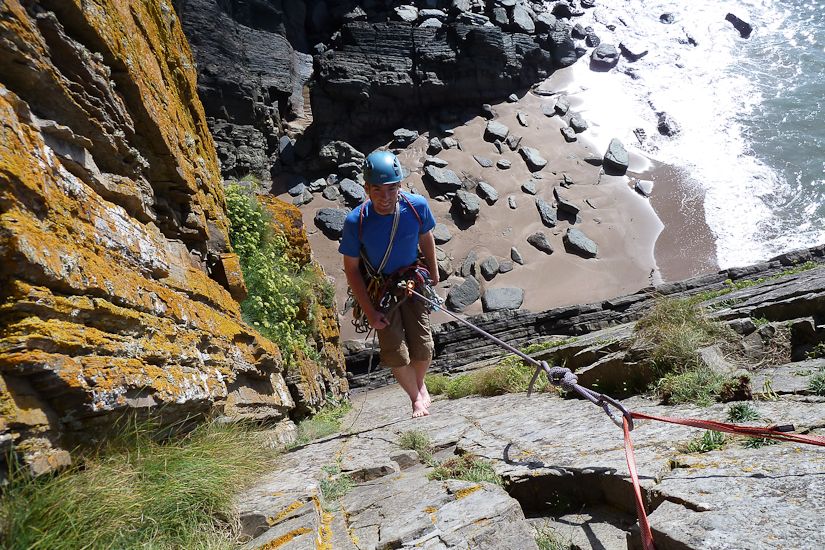 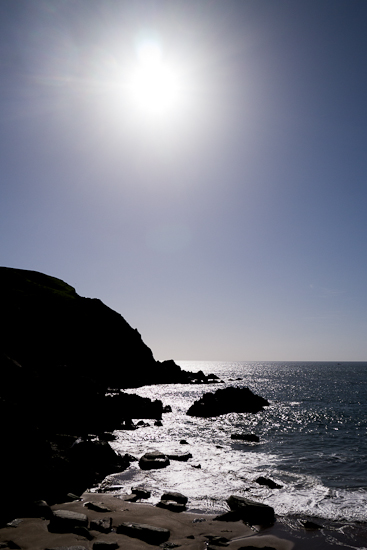 Great view from the base of the climb 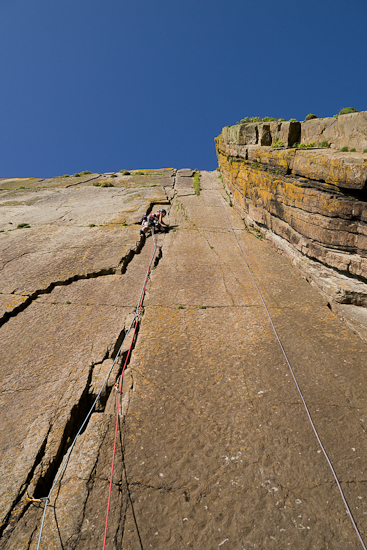 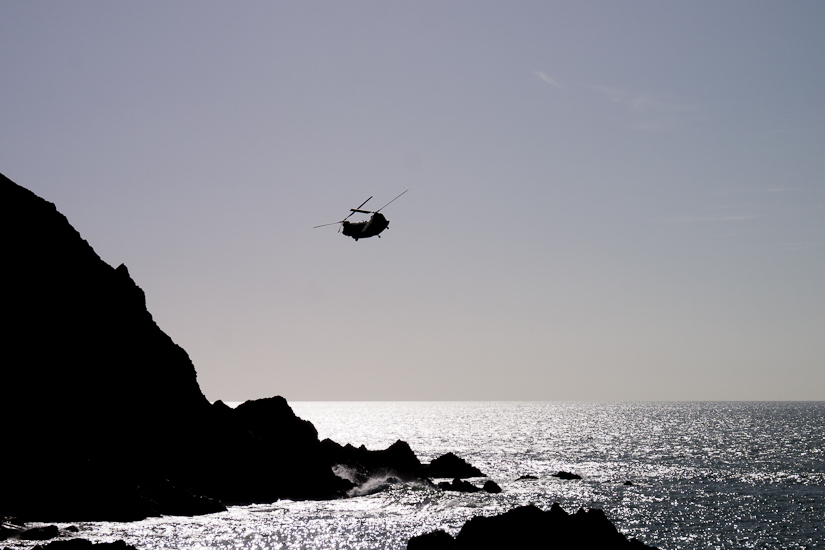 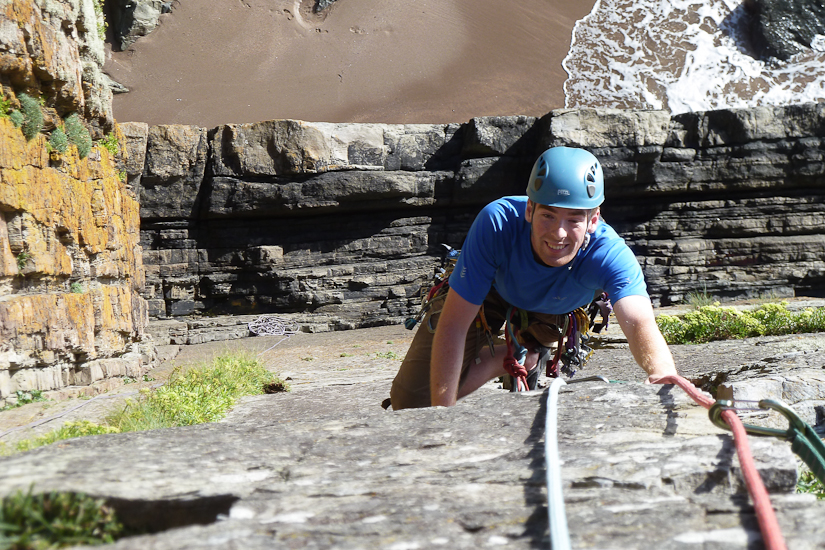 Me reaching the top of Lost Horizon 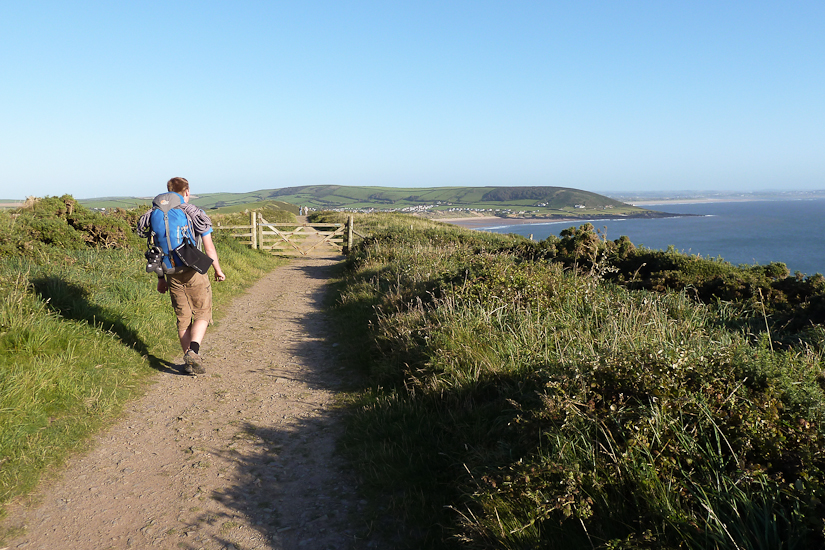 Once we had finished we had a lovely walk back to the car, and it would have been lovely to be able to head to Croyde beach and have a BBQ as the sunset though as it was past six and we had to get to Bristol we had to head straight back which was unfortunate, though by the time we for back I was pretty tired and glad we didn’t hang about any longer.