I have been waiting to go to Pembrokshire in order to climb on the steep limestone sea cliffs there but it’s not just a case of turning up and climbing there due to an assortment of bird bans until the end of July, many of the cliffs are within the Castlemartin firing range so they can only be accessed when the range is not being used, many of the sea cliffs can only be accessed at low tides and finally wanting good weather so it is enjoyable to be on the cliffs. Last week most of these happened so I headed over to Pembrokeshire for three days with mum, although tides were not ideal but due to calm seas and neap tides it wasn’t an issue.

On the first day we arrived in the afternoon and headed to Mowing Word which is home to the classic traverse line Heart of Darkness which is given HVS 4c. This was the first route we climbed and we combined it with New Morning which is E1 5b to make it a truly fantastic three star climb by climbing the first pitch of Heart of Darkness and the second pitch of New Morning. The first pitch is the traverse over a sea cave and is very sustained with very few rests as due to the type of holds it wasn’t possible to lock out arms which meant that it was very strenuous, though it was fantastic climbing in a stunning position with some great exposure. 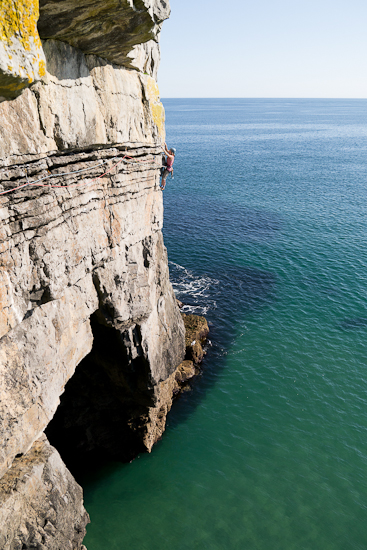 Moving around the arete onto the traverse on Heart of Darkness 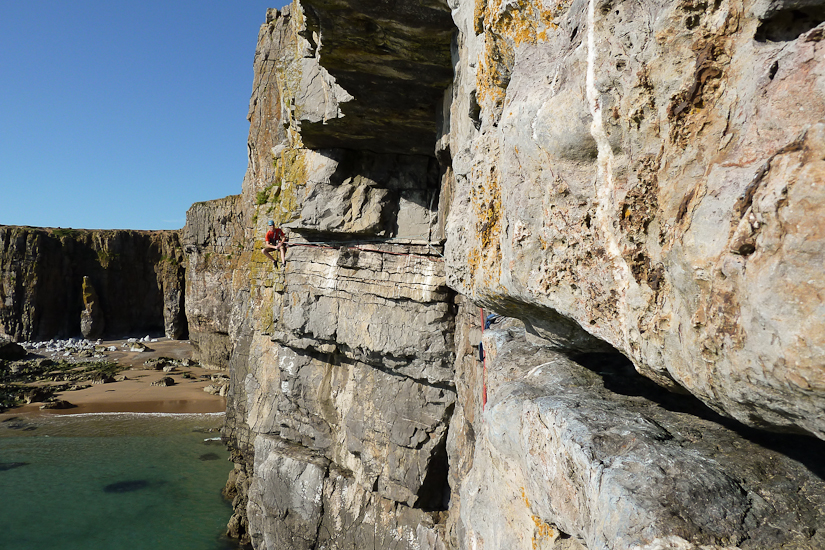 Me at the belay ledge on Heart of Darkness HVS 4c 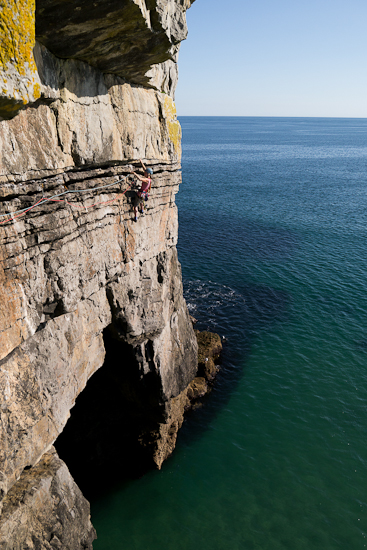 Traversing over the cave on Heart of Darkness HVS 4c

The next pitch was finishing up the steep crack of ‘New Morning’ which was fantastic but from the belay looked fairly intimidating as it was so steep. The climbing was well protected but due to it steep and strenuous it was fairly hard work. It was going really well until one of the last few moves where there was a small ledge which I reached up with both hands for but it was covered in dust which acted like ball bearings below my hands and annoyingly I slid off due to attempting to keep using the hold rather than quickly looking for an alternative, which on my second attempt I found which was a fantastic jam which enabled a much needed rest.

After this we headed back to the campsite as it was getting late and not feeling the need to climb until it was dark due to having two more days of hard climbing left. On the way back we made the most of the evening sun and went for a swim in the very cold sea, it felt colder than some mountain lakes in the middle of winter, before heading back and cooking dinner watching the sunset from the campsite. 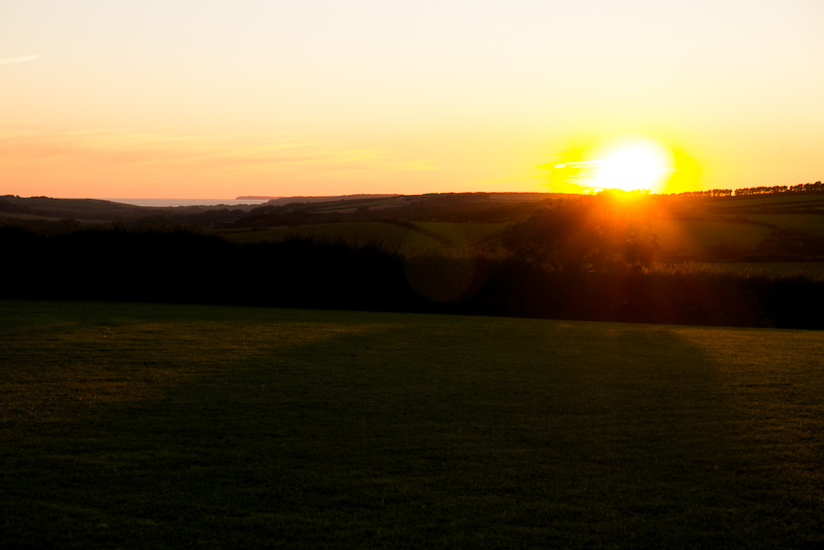 The next morning we headed to St. Govans Head in the morning where I climbed ‘The Arrow’ another E1 5b which had a very intimidating start up a very steep wall off a ledge. The climbing was fantastic and not too strenuous as there were some good resting points though as I progressed up the climb the sun moved around onto the face and it quickly became very hot due to being out of the sea breeze and was a sign of things to come in the afternoon. I reached the top without resting or falling so The Arrow became my second E1 which I have climbed cleanly onsight. 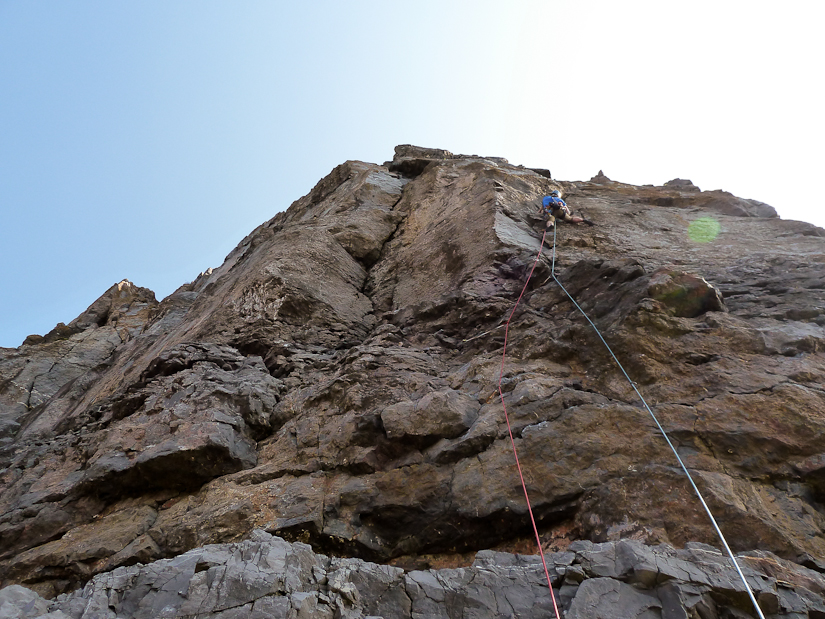 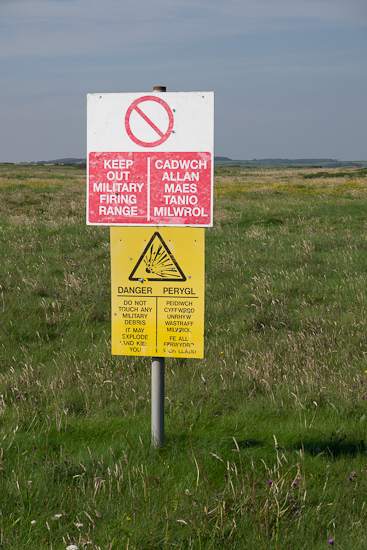 A trip to Range East

This lead to me having an epic on Manzoku due to falling while attempting to place gear while 2m above my previous piece due to neither hands having any grip on a good handhold, the piece of gear below me ripping (cams and smooth limestone don’t mix) and inverting me before I came to an abrupt stop 20ft below where I fell as I was swung into the rock back first. Thankfully I was ok and just came away with a few bruises and could abseil off to clean the route of all my gear. Once I had finished cleaning the route of gear Mum lead a VS called Limbo which combined with the slippery rock, my arms being completely pumped felt very hard for a VS.

At this point I was ready to call it a day due to being shattered but I was persuaded to head over to Saddle Head to look at a three star VS 4b called Blue Sky which we were going to alternate leads on it as it was a two pitch route. Although, due to high tide we started the route from a high tide ‘ledge’ half way up the first pitch and when I arrived at the belay we decided that it would be best for me to run the pitches together to save time. It was a stunning route and went up rock steeper than should be possible for a VS with amazing exposure, but due to the juggy handholds it was only 4b climbing. I arrived at the top while running out of gear after a 40+m pitch very happy that we had done the route. 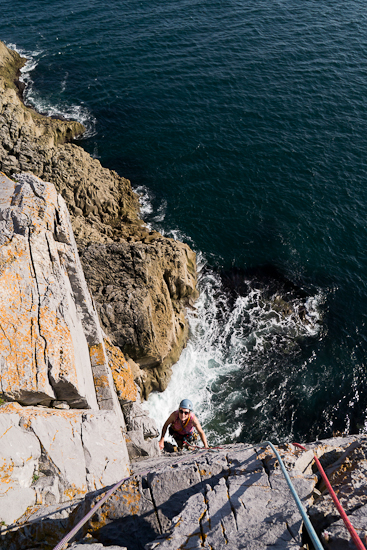 Climbing Blue Sky, a very airy and amazing VS 4b

The next morning we headed to St. Govan’s Head again and climbed two classic HVS 5a routes Army Dreamers and Front Line. They were both fantastic routes, Army Dreamers was very steep & sustained and had an airy traverse near the start and was just fantastic and when I got to the top I just wished it carried on further, I was concerned at the start about the level of polish on the route due to having been told St. Govans is very polished and the guide book saying that the route is showing signs of its popularity, but while climbing the small amounts of polish were not a problem as they were all on really positive holds. Front Line was less good but still amazing with an odd start under a ledge which then followed the obvious line to the top with some great rests and ‘out there’ climbing at times. 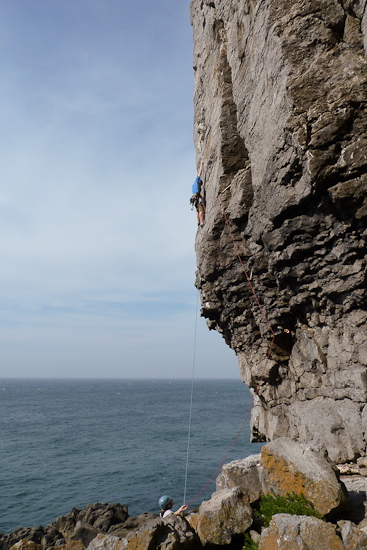 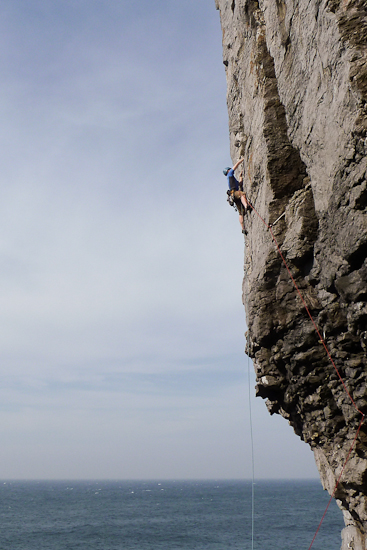 After these two routes we headed back to the car and back to Bristol and I now can’t wait to get back to Pembrokeshire to do some more climbing on the unique sea cliffs.

One Response to “First time Climbing on Pembrokeshire’s Sea Cliffs”