Yesterday I headed into Bath to see a friend from school and Bath was covered in snow, so much snow that we actually went snowboarding (these pictures will appear in a later blog post).

Shortly after I arrived at his house it was pointed out that a pair of deer were at the opposite side of the field next to their house, so in an attempt to get my first wildlife pictures of an animal other than a bird I hastily changed lens and “stealthily” ran across the field to get as close as I could before spooking them, unfortunately the one that was hiding in the bushes was more timid than the one in these photos and got spooked and ran away causing the one out in the open to follow suit!

Then later in the evening after it got dark we went for a wonder around town and near Pulteney Bridge and came up with these two cityscapes, unfortunatly the photo of the bridge it’s self did not come out as well as I had hoped as the weir was not lit up as it often is, though this did mean that a photo in the opposite direction was made possible and is the feature image in this post as it brought out some beautiful twilight colors. 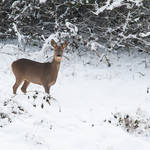 Roe Deer in the Snow 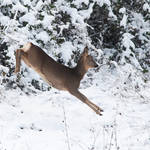 Roe Deer jumping in the snow 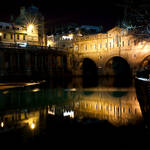 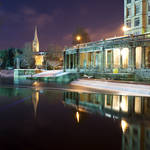 View from Pulteney Bridge at night