Having discovered that the hut for the Dent Blanche was full we developed a new plan, to traverse the Zinalrothorn from Zinal to Zermatt via the north ridge. To get to Zinal we had to get a number of buses, and due to the timetables we ended up in Zinal very early in the morning. This enabled us to have a leisurely stroll up to the hut before spending the afternoon relaxing.

The start of the walk was in the mist which we both appreciated as it kept us cool during the majority of the ascent. Eventually the sun started burning off the morning mist and we were greeted with a stunning view of the Grand Cornier, the Dent Blanche and the Ober Gabelhorn. Due to the ever changing views the walk in was one of the most enjoyable I have experienced to date, this combined with relaxing all afternoon at the hut made for a very enjoyable day.

All too early the next morning ours alarms woke us up and we both struggled to eat anything for breakfast as our bodies definitely wanted to still be asleep at 2:45. We made good time up the moraine and initial glacier and were soon at the start of the Arête du Blanc as dawn was starting to break. This arête gave a huge feeling of exposure with huge drops to either side as we walked up the narrow icy steps, at times I did resort to having my hands on the ground as well as my feet!

Once we got to the end of the snow arête we were greeted with the morning sun, as well as a fierce wind which made the rest of the ridge extremely cold. The ridge was fantastic with great positions above the valleys around us, stunning views of the mountains in every direction and entertaining scrambling. We made reasonable time up the rest of the ridge, with only one route finding issue which was my fault. The views from the summit were amazing due to the crystal clear air, lack of clouds in the sky and huge mountains in every direction.

The start of the descent was enjoyable with some interesting down climbing, however we then reached the start of the abseils which seemed to go on forever, especially in the current conditions. We were expecting about two abseils down to the gable notch, and got there after three. From there we were expecting an quick descent, but due to the lack of snow there was an awful lot of loose rock, so we decided to continue abseiling while there was the option.

Eventually we got to the end of the abseils and enjoyed the last snow ridge down to the end of the main difficulties. After a hideous traverse of loose ground, which was followed by a horrible loose chimney we were finally down at the last section of glacier to take us back to the Rothorn Hut, which was at 3200m. Unfortunately this meant that we still had 1600m of descent to get us back down into Zermatt.

This last descent seemed to go on forever, but we eventually made it back down into Zermatt and just had to manage the last challenge of getting some food and getting back to Saas Grund via public transport with our very tired bodies. We managed to get back to Saas Grund but totally failed at finding food! 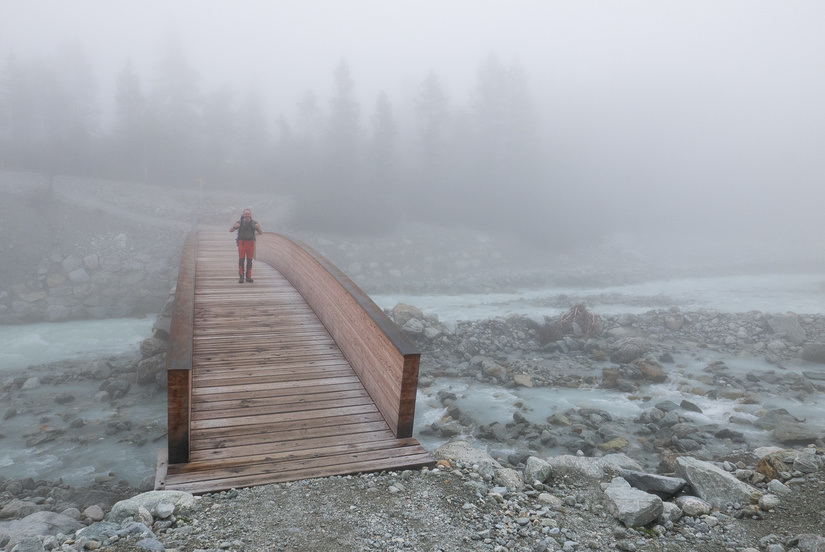 Misty walk in to the hut 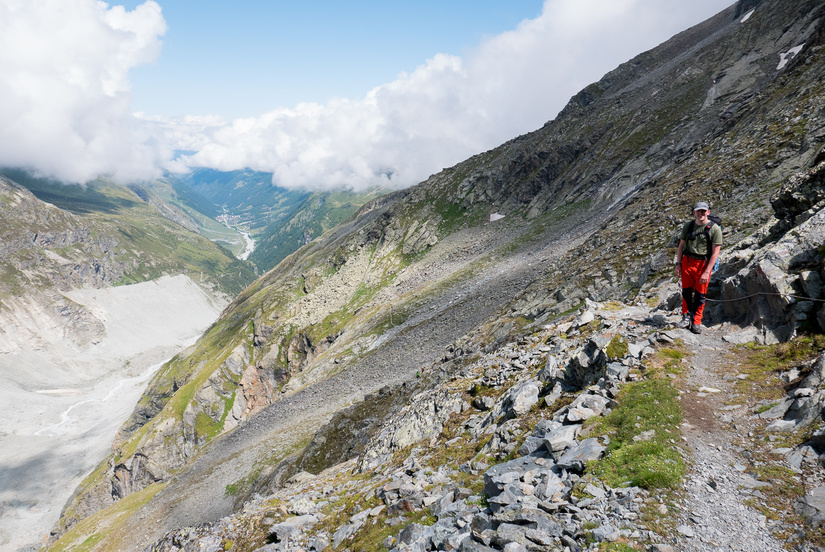 Views back down to Zinal 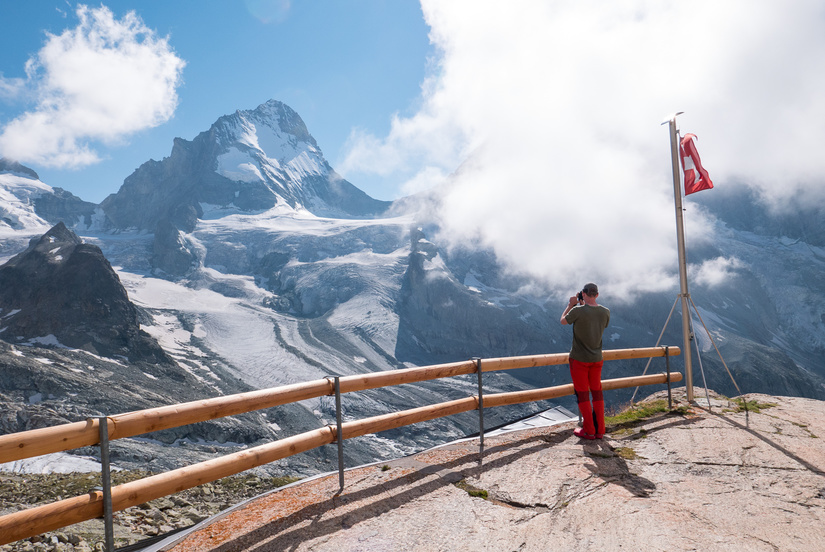 Amazing view of the Dent Blanche from the hut

Dawn view of the Matterhorn, Ober Gabelhorn and the Dent Blanche 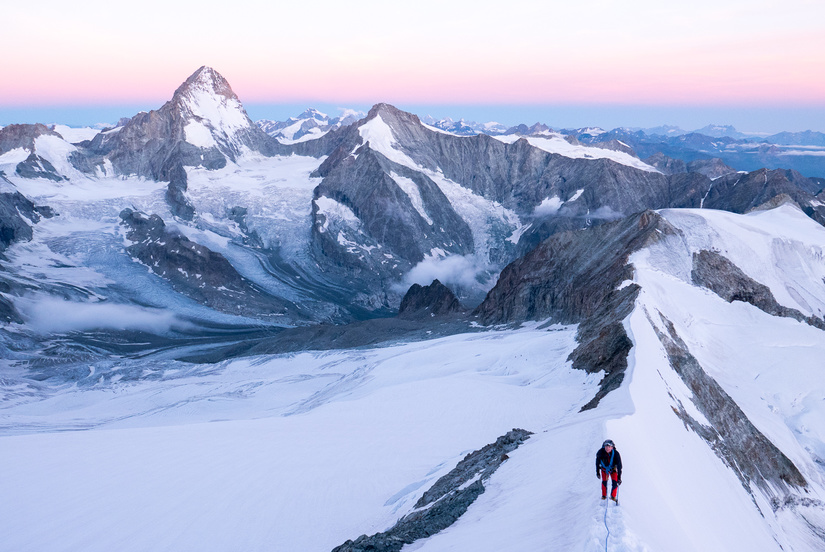 On the exposed snow arete in front of the Dent Blanche 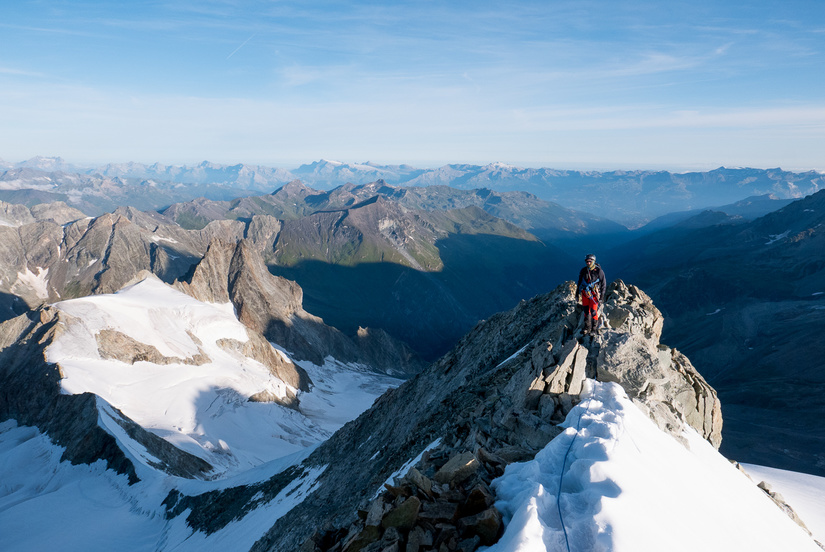 At the start of the rock ridge 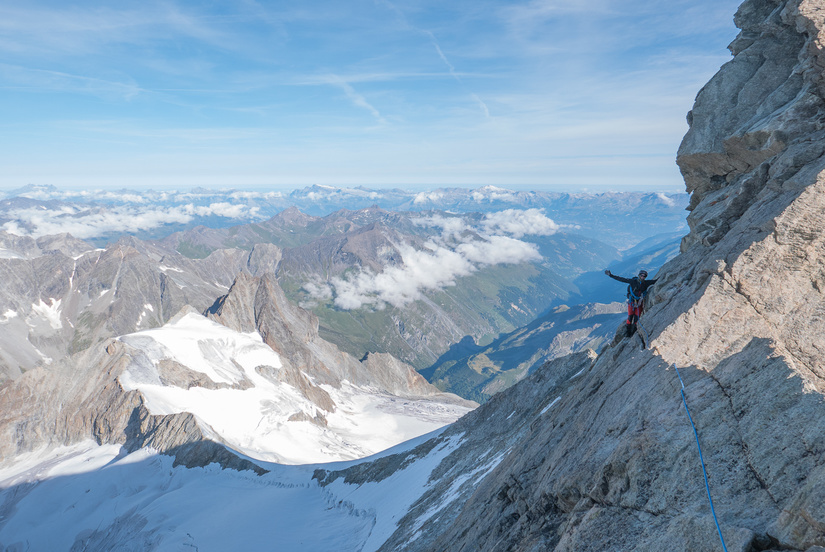 High above the valley 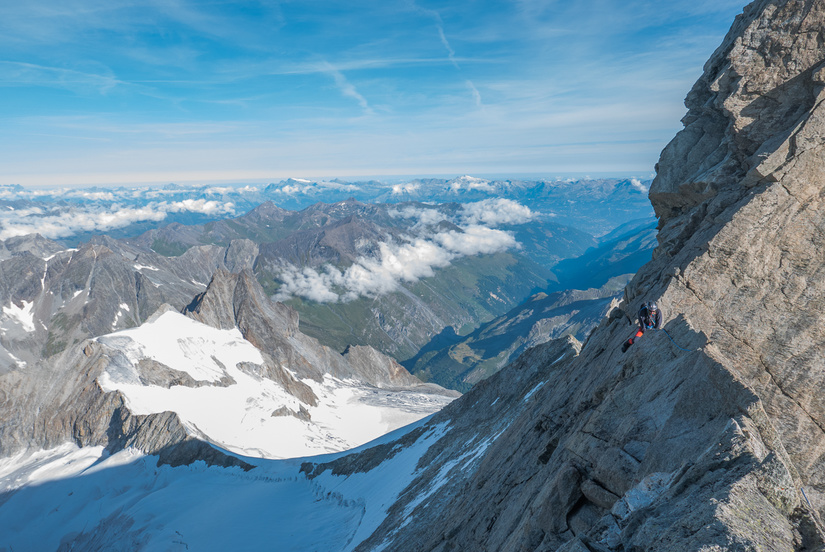 A Cheval on the ridge 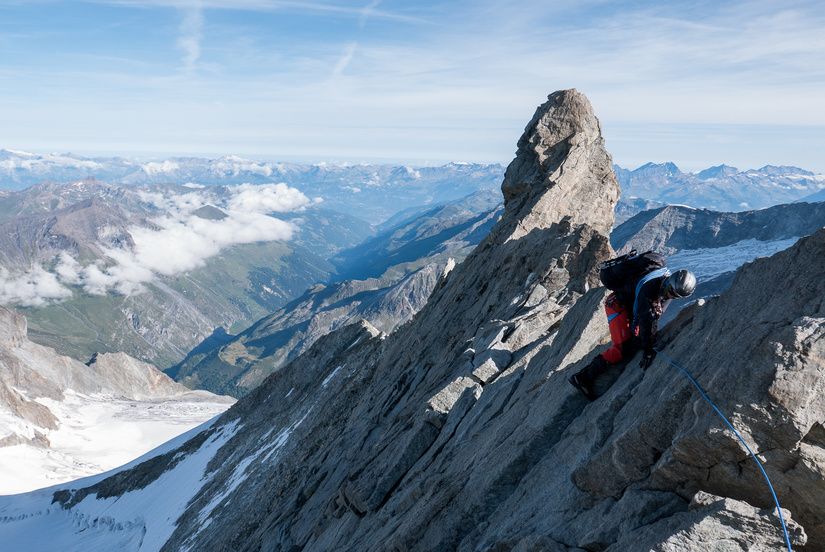 Scrambling on the ridge 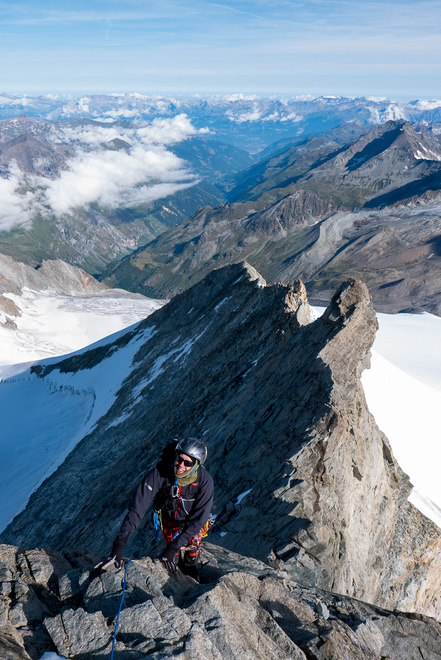 Nearing the top of the North Ridge 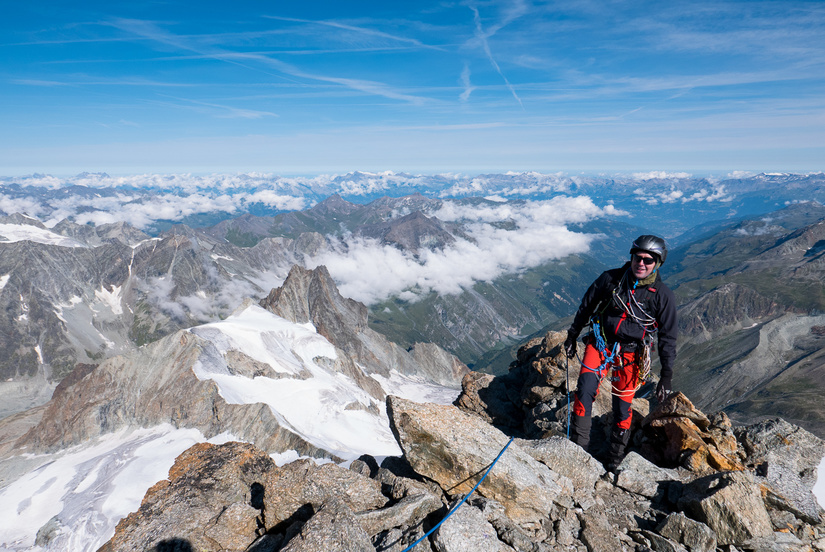 At the top of the difficulties on the North Ridge 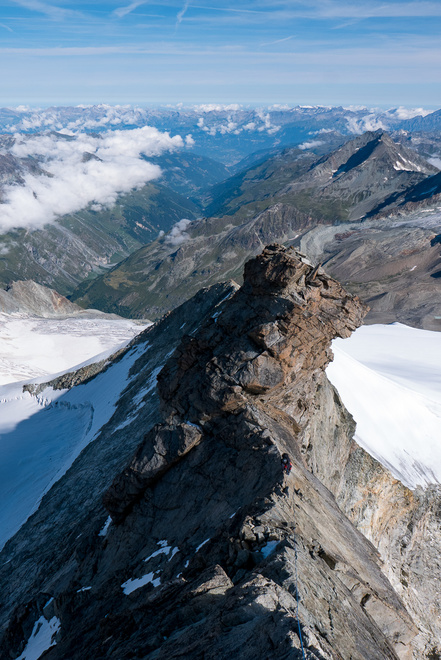 Final section of easy scrambling to the top 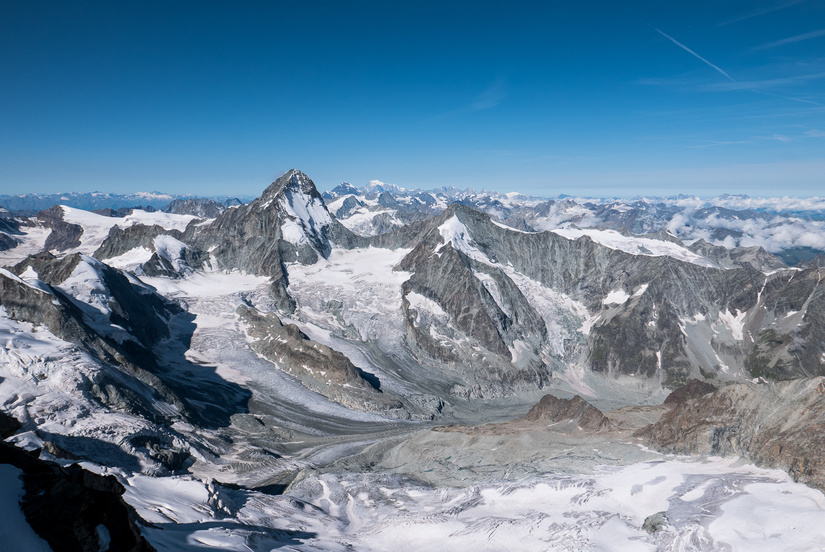 Amazing view of the Dent Blance from the summit 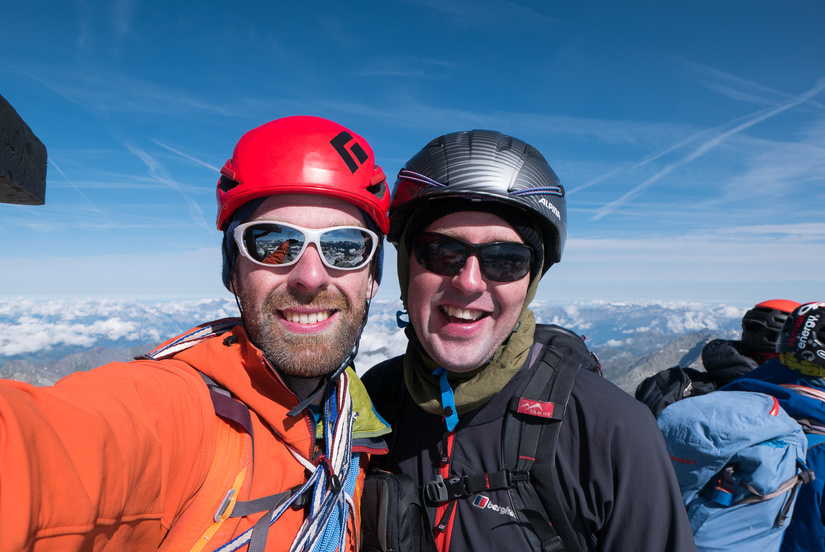 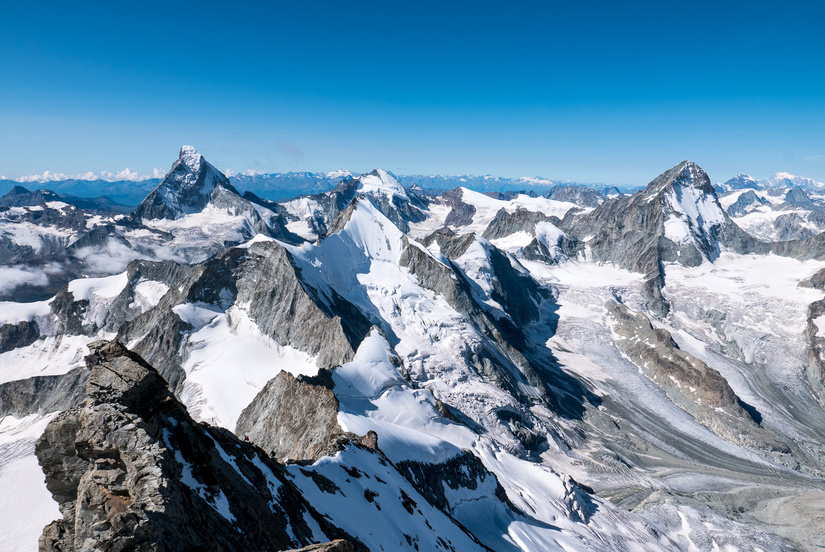 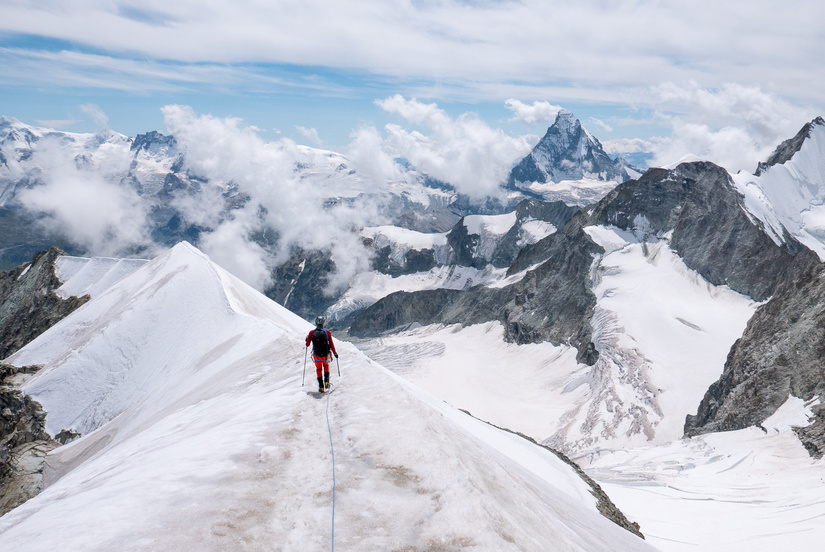