On our last day we headed up to the the impressive south face of Puig Campana to climb the classic corner of Diedros Mágicos which is a 5 pitch f6a. Unusually for Spain, the route had no bolts other than for the belays which gave the route a UK grade of E1.

Also unusually for Spain there was actually a decent size walk in, although it looked pretty short from the car as the south face is so large. After a hot walk in with a fantastic view of the south face, we were soon at the crag which other than a team on the classic ridge of Espolón Central we had to ourselves.

Looking up at Diedros Mágicos in the morning 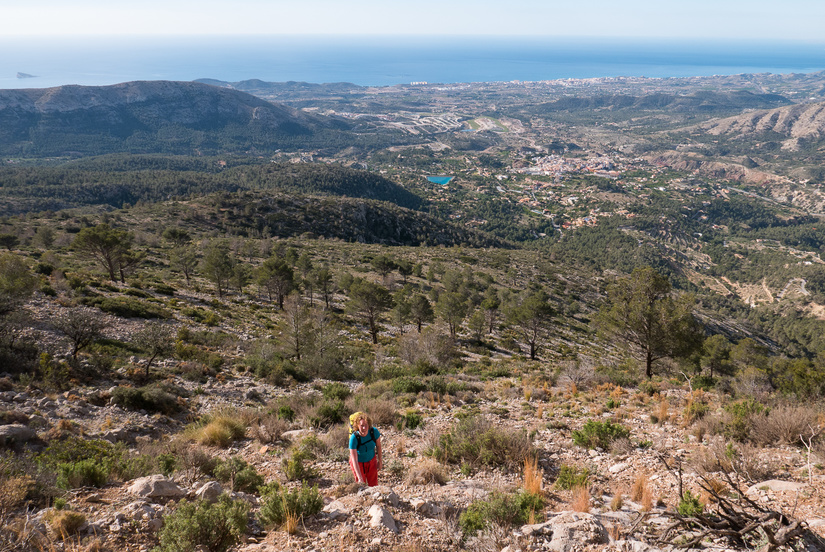 Almost at the base of the route

From below the groove of Diedros Mágicos looked very impressive so I was pretty psyched to get onto the route and the lack of bolts made me even more excited. The first pitch was much harder than I was expecting, but the climbing was amazing. It involved excellent bridging and laybacking up the steep corner, with excellent unpolished rock, loads of gear and it finished at a very comfy cave belay. 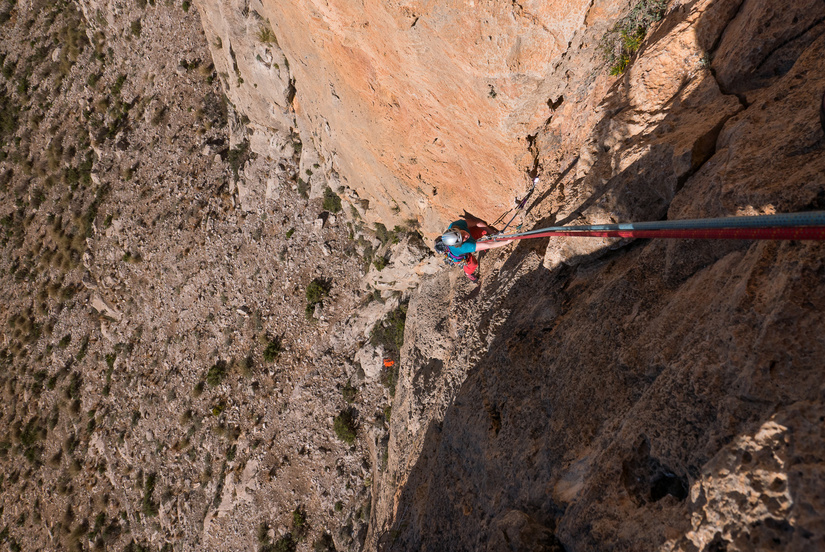 Becky on the steep first pitch

The next two pitches involved more of the same, just a bit easier. At the end of the third pitch there was an excellent traverse over to a ledge, there is a vital flake at the start of this traverse which was very loose and will fall off at some point. The fourth pitch was meant to be very easy, but it turned out to involve enjoyable technical climbing which found the line of least resistance up a series of corners and cracks. 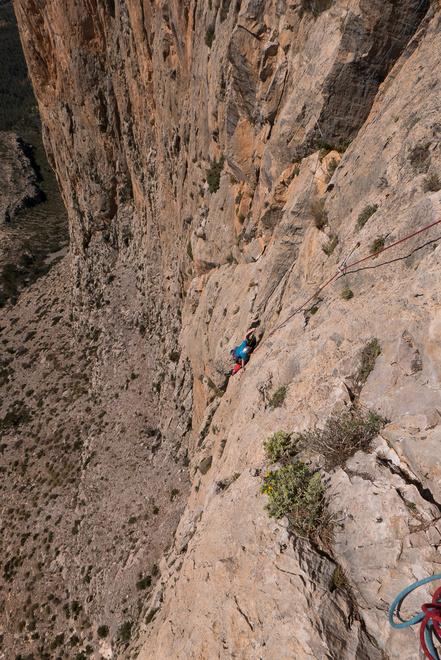 Approaching the exposed traverse on P3 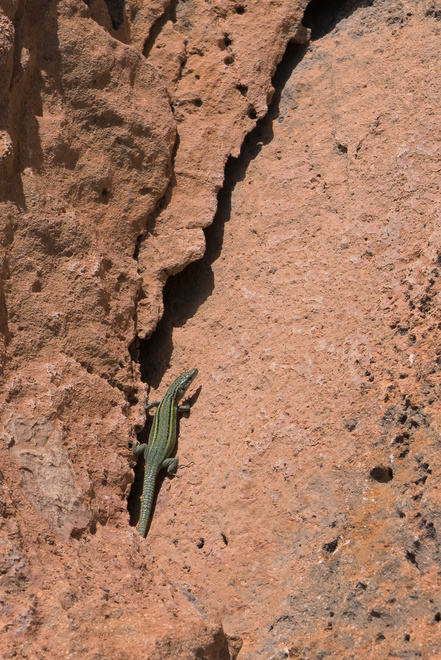 The penultimate belay was on a comfortable ledge below the outstanding final 50m long crux pitch which surprisingly was also not protected by bolts. This involved interesting climbing up to a roof, before some very hard & insecure (but well protected) moves out to the right into the corner above. A few easier moves lead to the second crux which was getting established in the left hand corner above, which was easier than the first but again very well protected. After this some easier climbing lead up to the final belay. 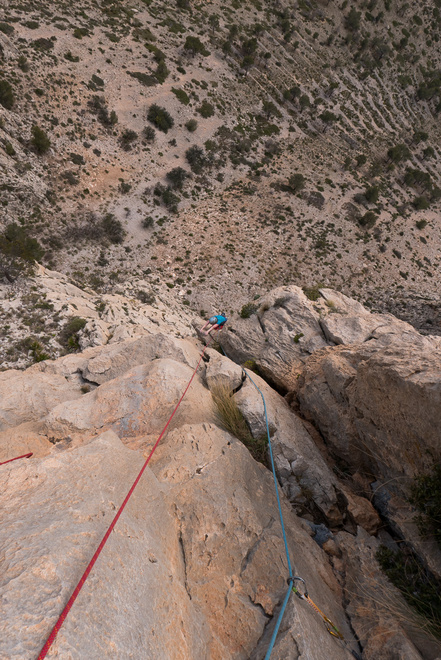 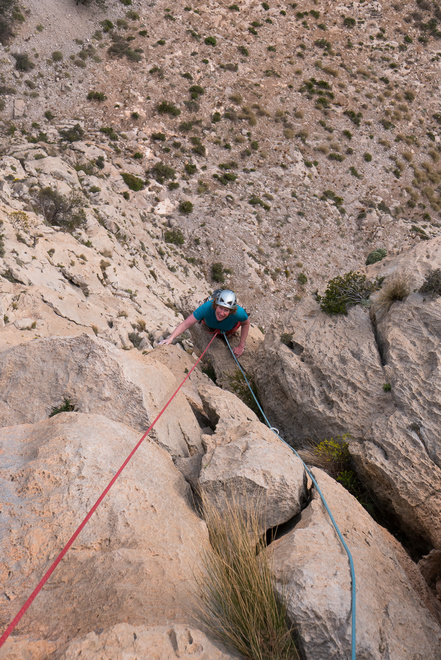 Long way down from the top 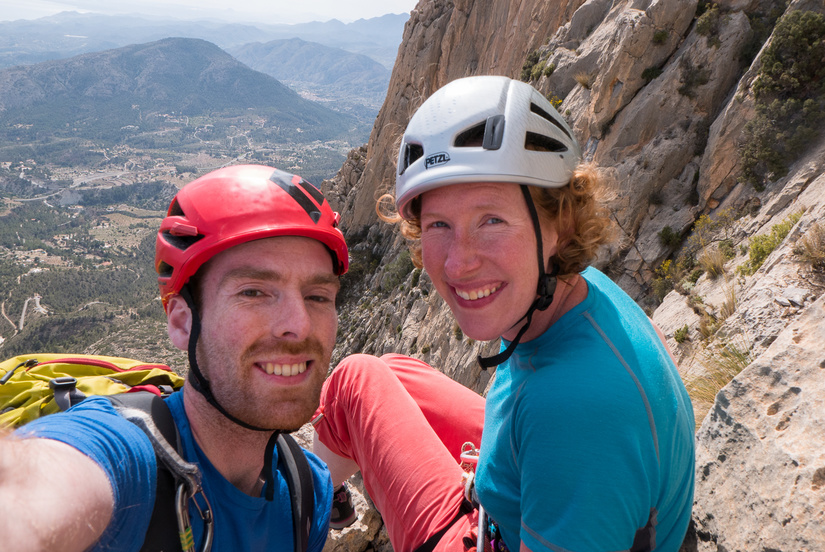 We quickly abseiled down the ground in four abseils down a bolted abseil line and made a hasty retreat back down to the car in order to get back to the airport for our flight home, late flights do have their advantages! (but did mean that we didn’t get home until 2am!) 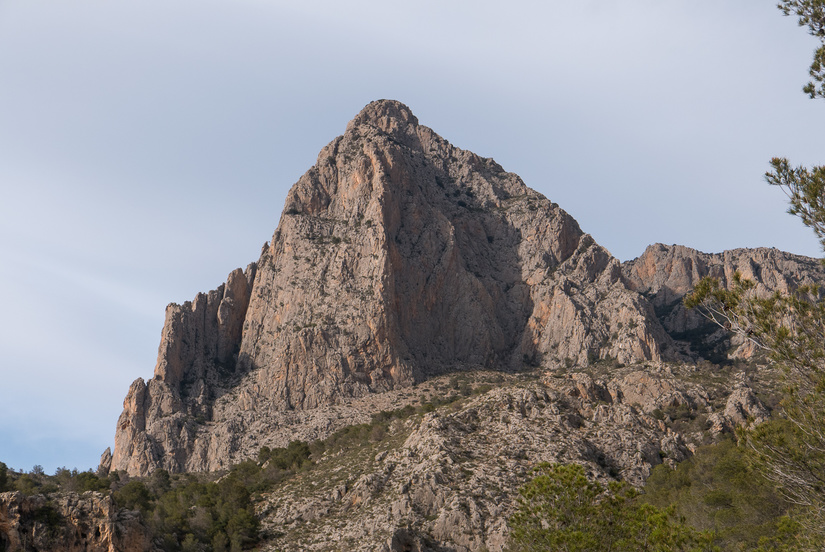 Looking back up to Puig Campana in the evening

Diedros Mágicos was an excellent finish to a brilliant trip, it was great to get on a long traditionally protected route with no polish. As the first few pitches were harder than I was expecting it made it a really balanced & sustained route, with most pitches feeling like HVS apart from the final pitch which was a solid E1. I thought the grades of the pitches were more like 5+, 5, 5, 5+, 6a+.

One Response to “Diedros Mágicos”