With a great weather forecast combined with cold air temperatures David and I planned a big day out in Rjukan’s Upper Gorge today. Initially we had planned to do Sabotørfossen and then Nye Vemorkfoss which are both multi pitch WI5s.

On the walk in it became clear that it wasn’t as cold as it was forecast to be, but that didn’t seem to be too much of a problem as nothing seemed to be dripping too much. The walk up through the upper gorge was fantastic as it is such an atmospheric place with the steep sided walls, covering of snow and steep lines of ice towering out of the gorge.

We headed to Sabotørfossen first as it was the classic and looked like a stunning route, I elected to take the middle pitch which left David with the easy first pitch and crux final pitch. The first pitch is an easy angled slab up the start of a hidden chimney with a number of steep icy steps, which leads up to the final crux headwall.

David had to clear a lot of snow off the first pitch as it was less steep, thankfully as the route steepened up for the other pitches this stopped being an issue. Despite the warm temperatures none of the ice or snow was melting which meant that for a change we weren’t getting wet while climbing!

The second pitch was fantastic, setting off into the unknown and finding ourselves in this atmospheric icy chimney system which had brilliant climbing, great ice and all the atmosphere of a mountain couloir route. After a long pitch all that was left was the crux headwall which David shot up with excellent style, as I was seconding I decided to practice conserving energy by avoiding swinging my tools as much as possible and only ever having one high axe. Unfortunately this resulted in my having a little fall due to a hook giving way, should have just swung my axes! 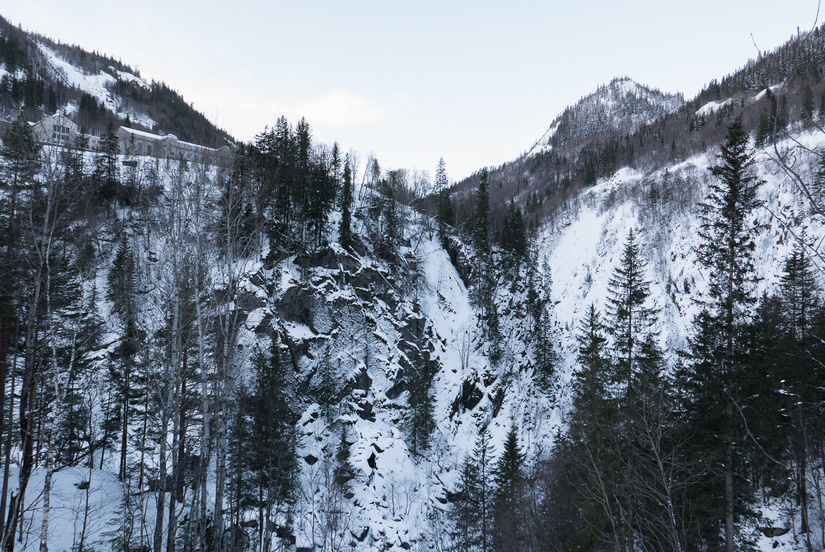 View up into Upper Gorge 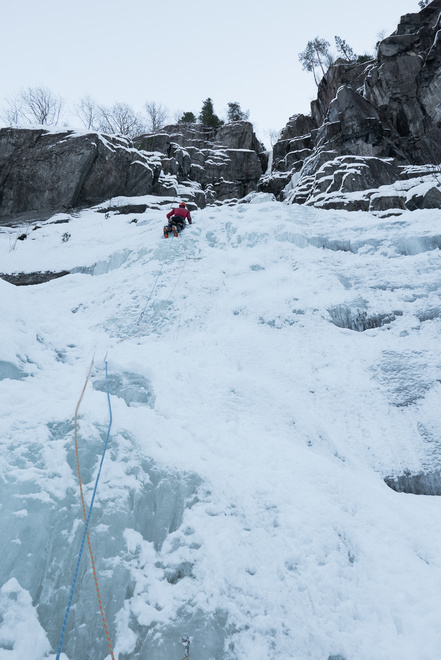 David on the first pitch 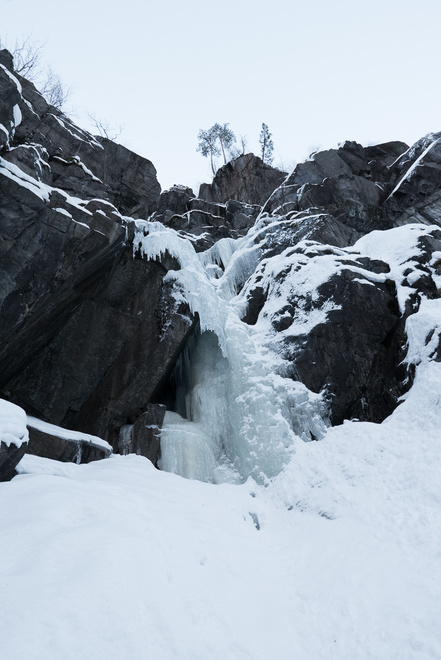 Entry into the chimney 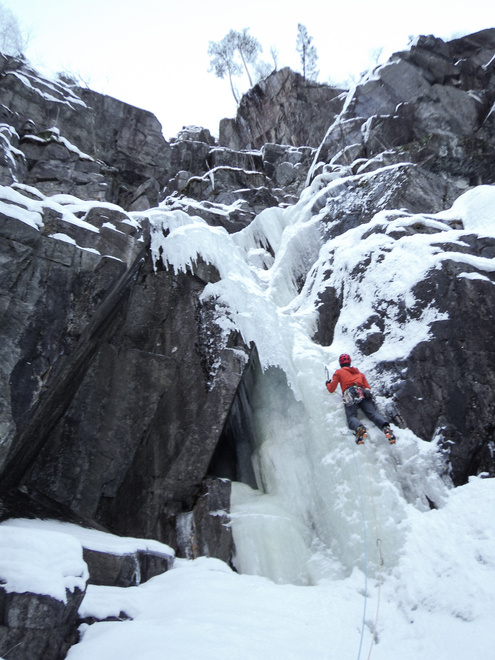 Me climbing up into the chimney 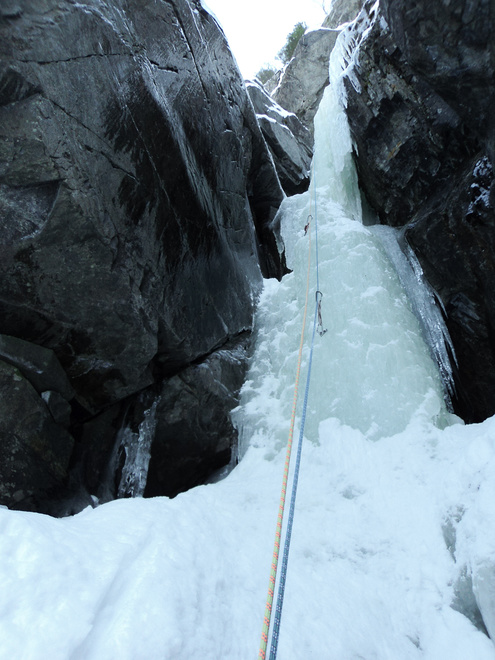 Wonderful ice climbing up the chimney 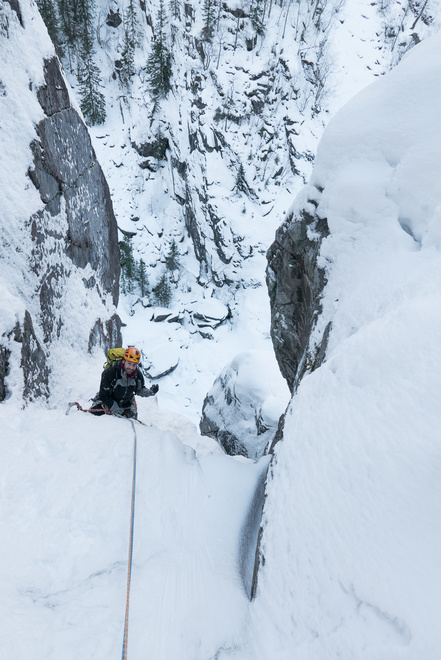 David at the top of P2 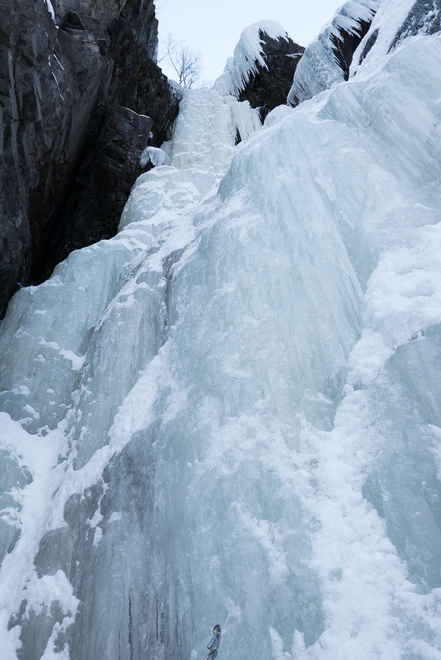 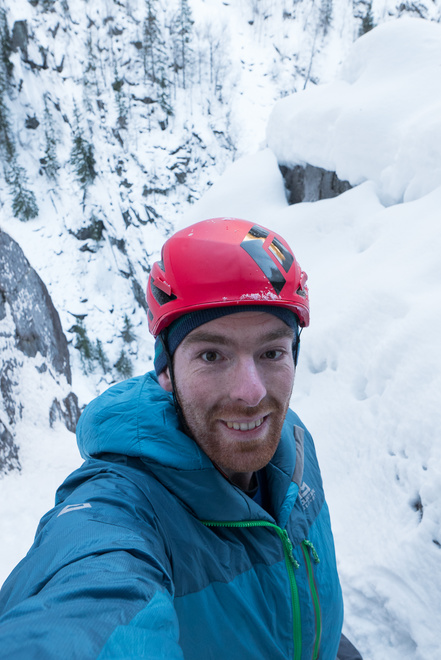 Me on the final belay 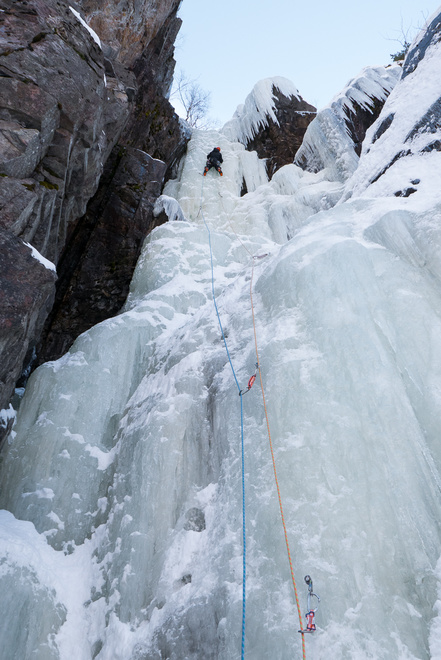 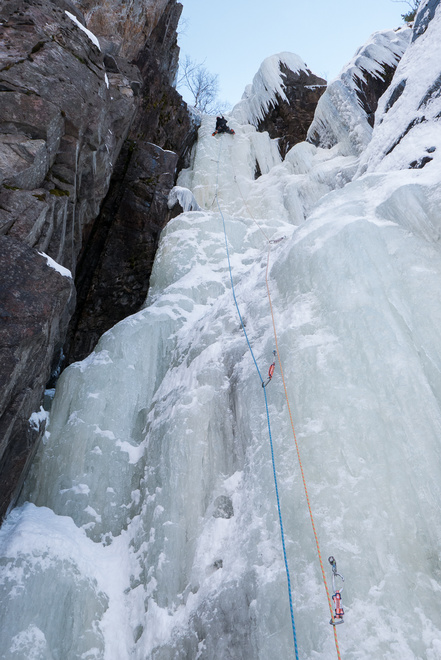 David almost at the top of the final pitch

Me at the top of Sabotørfossen

After we got to the top we just had to navigate around the power plant, which involved a lot of very deep snow so it was a relief to finally get back to the road back down to Vemork Bridge. We headed back down into the gorge to collect our extra sack, have lunch and then went to look at Nye Vemorkfoss. Unfortunately, upon closer inspection it became clear that this area was lacking in ice and while it was certainly climbable the pillar did look pretty tough. We decided to go in closer and have a look and it was at this point we realised just how wet the route was, so decided to retreat back down to the gorge and make alternate plans. 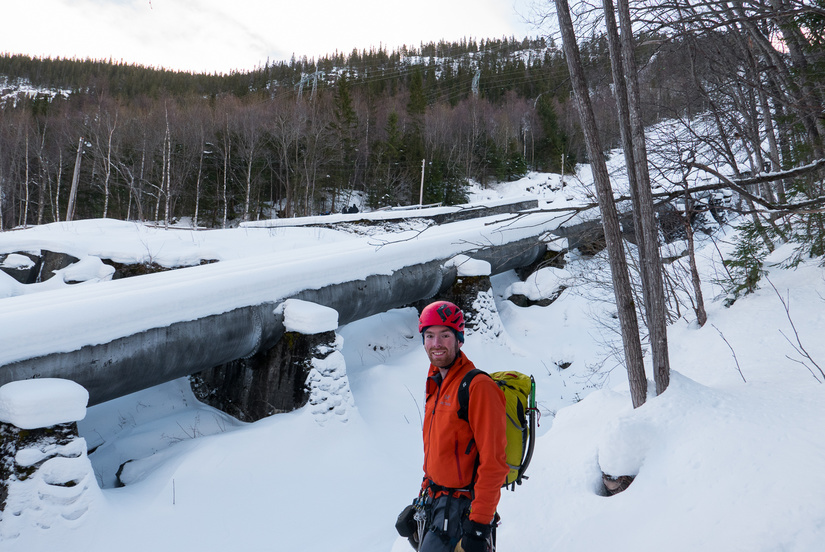 Trying to find our way around the hydro plant 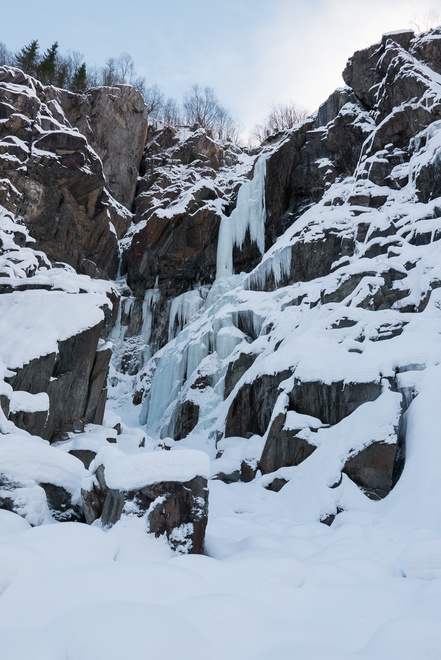 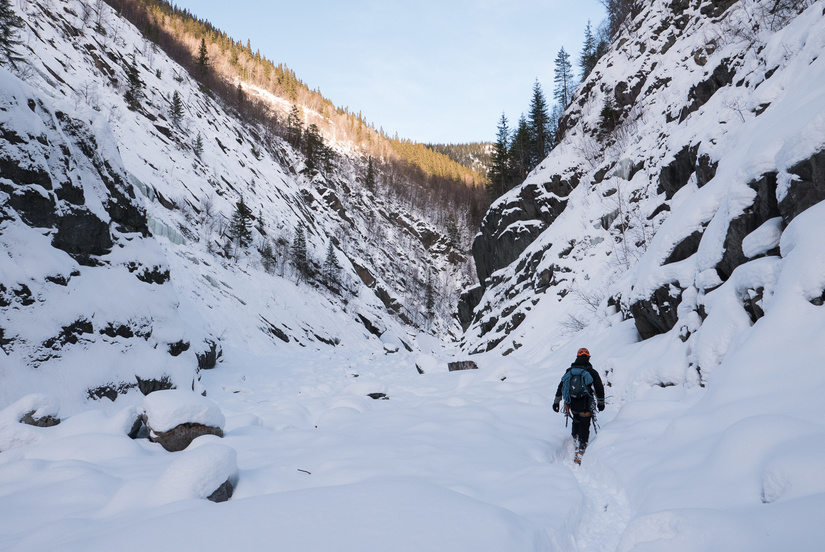 Walking back down Upper Gorge

While walking along the bridge before we decided we were admiring Vemorkbrufoss Vest which looked very steep and intimidating from the bridge. As it looked so great we decided to go and have a look at it, and discovered that from the bottom it looked significantly less steep. Unfortunately the warmer temperatures had begun to take effect and route was a bit damp, but the main line up seemed to avoid most of the water.

After waiting for the party in front we set off up the route which was brilliant, just a shame it was a bit wet with some cruddy ice. I lead the first pitch and really enjoyed it, but it certainly felt harder than it looked from below but am pretty sure it wasn’t WI5 in todays conditions. David decided to make the final pitch more interesting and he headed right from the belay and up a steeper line, which would have been great had the ice not been so cruddy. 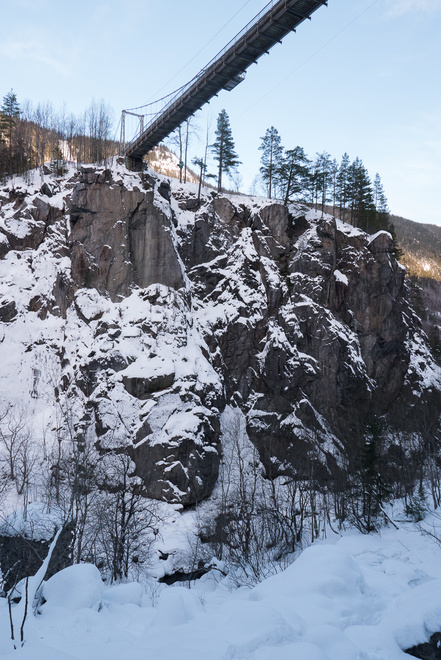 View under the bridge 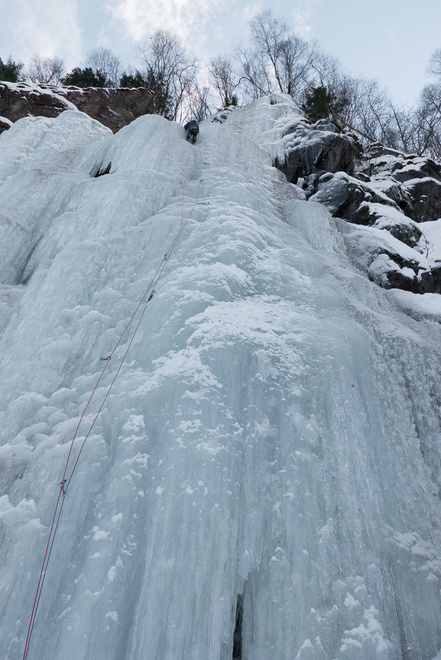 Another team on Vemorkbrufoss Vest 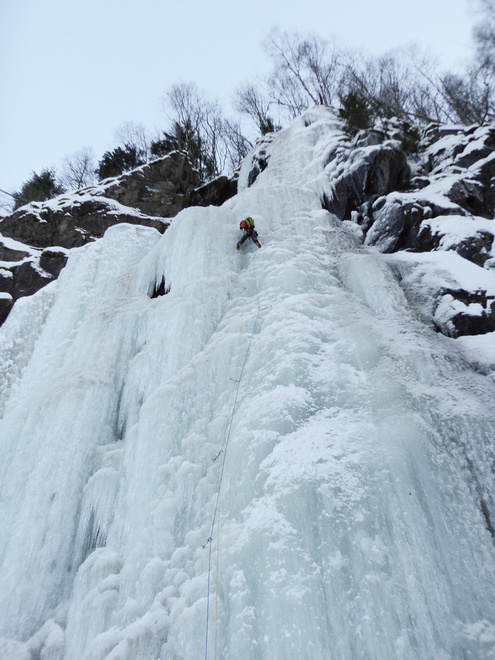 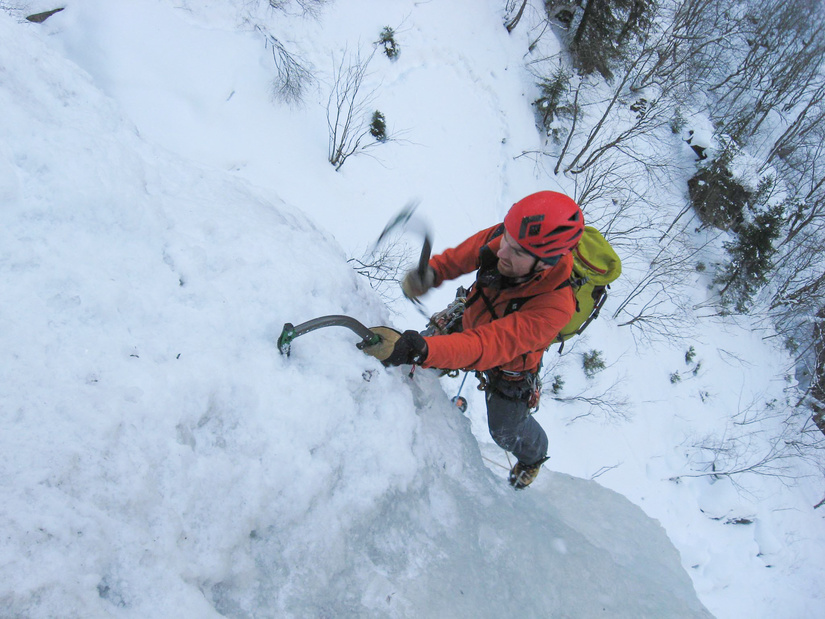 Me finishing the first pitch 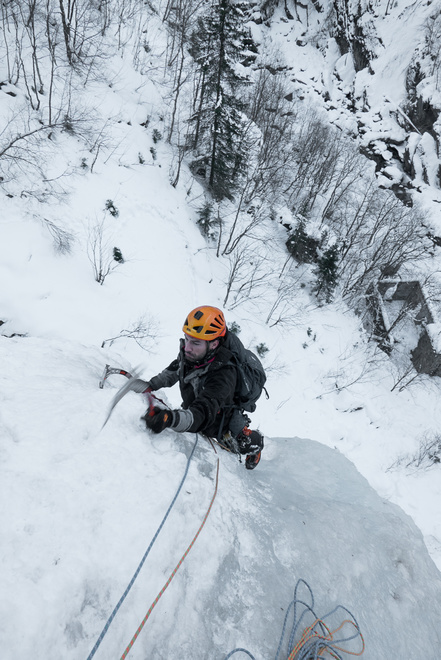 David at the top of P1 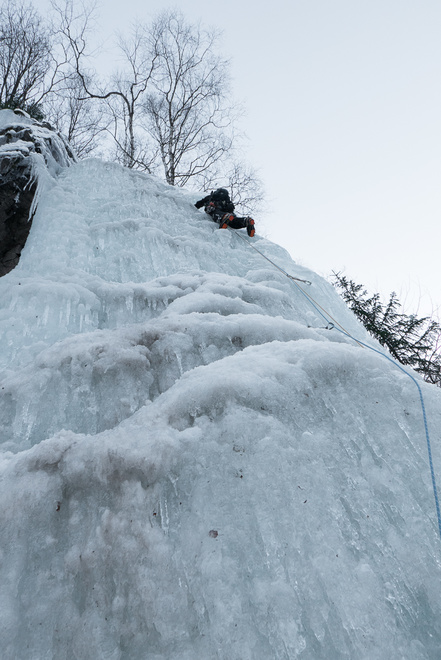 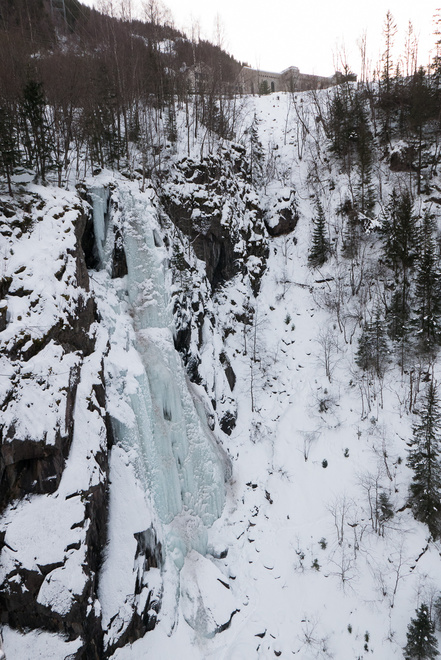 Vemorkbrufoss Vest from the bridge 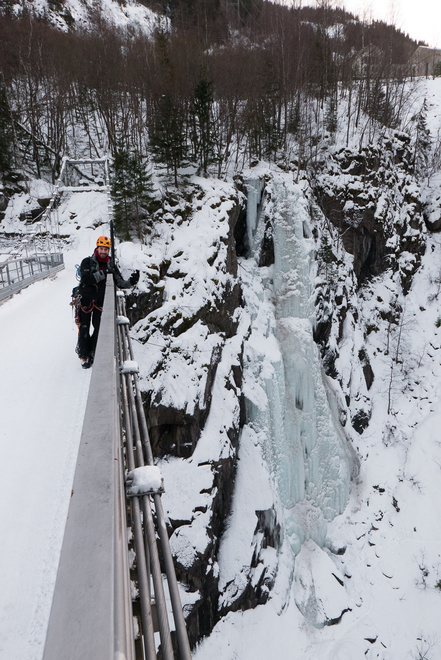 Looking back at the route 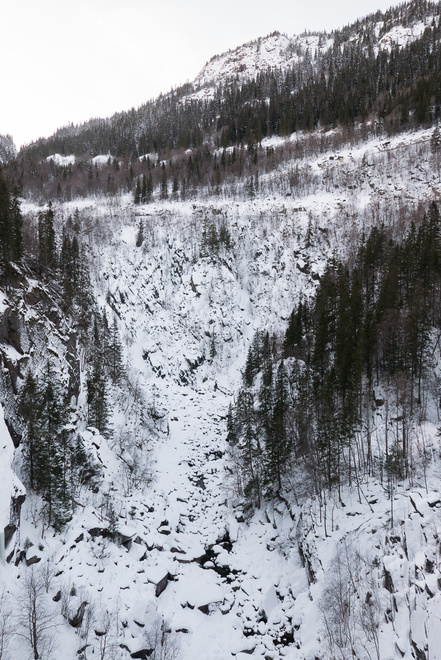 The view up the gorge from the bridge

It was great day as we managed to tick off two classic WI5 multi pitch routes in an iconic part of Rjukan. It was very strange to finish multi-pitch ice climbing and not have a long walk back down to the car, and then a long drive home; instead we had a 10min walk back to our accommodation!

Another good day in the forecast tomorrow, so hopefully getting back into the atmosphere of the Upper Gorge!