Home / Mountaineering / Rock Climbing / Sandbagged by my mother in Cornwall…

Sandbagged by my mother in Cornwall…

I have just returned from the Avon Mountaineering Club’s annual September trip to Cornwall, we were staying in the fantastically located Count House which is located right next to Bosigran. It felt more like mid summer than mid autumn during the trip thanks to warm weather, blue skies and plenty of sun. On the first day I headed down to Bosigran with Rich with the aim of climbing Bow Wall and Suicide Wall. I had been debating Bow Wall all week as it is a super classic E2, however it has a reputation for being hard, speaking to my mum earlier in the week she informed me that “I don’t remember it being too hard, you will be fine”.

From the bottom the line looks pretty intimidating and I jumped on the route as the first route of the day, before I could get cold feet. The start of the first pitch was easy but pretty bold climbing, but thankfully the gear improved as the climbing got harder. I was soon at the first crux, a steep crack up to the base of a large overhang, after arranging gear I was beginning to get pumped so down climbed in the hope I could rest a few moves lower down. Unfortunately this tactic didn’t work as well as I hoped as the rest wasn’t very good, and when I got back to the hard move I had to rest before I could complete it. Once I committed to the sequence I was soon at the base of the overhang, although the jugs I was hoping for didn’t appear but I did manage to get a strenuous no hands rest by using body tension under the overhang. After placing a good cam I committed to the traverse, I gave it a good go on my first attempt but it was just too hard for me. The moves were strenuous undercuts and jams to get to a very high and powerful rockover on small holds to get onto a cramped slab. I can’t really remember the order of events, but the moves took me a good few attempts to work out and resulted in a  few pretty good falls. One of these was fairly unpleasant as I inverted and managed to spin 360 degrees while falling…

Eventually I committed to “the move” expecting to get onto the slab, to a rest and some more gear. Once I got onto the slab I was very disappointed to find that there was no rest, no gear and a difficult & exposed move across the slab to get to the ledge. At this point my gear was a long way to my left and there was the real possibility of slipping off and taking a massive wipper, however thankfully I got to the ledge and some gear. I soon arrived at the belay happy to be able to sit on gear and relax while Rich climbed. The second pitch was much less eventful, although really frustratingly I did slip of the traverse and we were soon at the top. By the time I got to the top I was feeling pretty shattered and was enjoying sitting in the sun and not feeling scared! Bow wall is meant to be E2 5b in the guide book, but in my view it is certainly 5c and top end E2/easy E3.

Following the route I sent a text to my Mum expressing my feelings about the difficulty, and got the helpful reply of “We must have been climbing well when we did it”…. 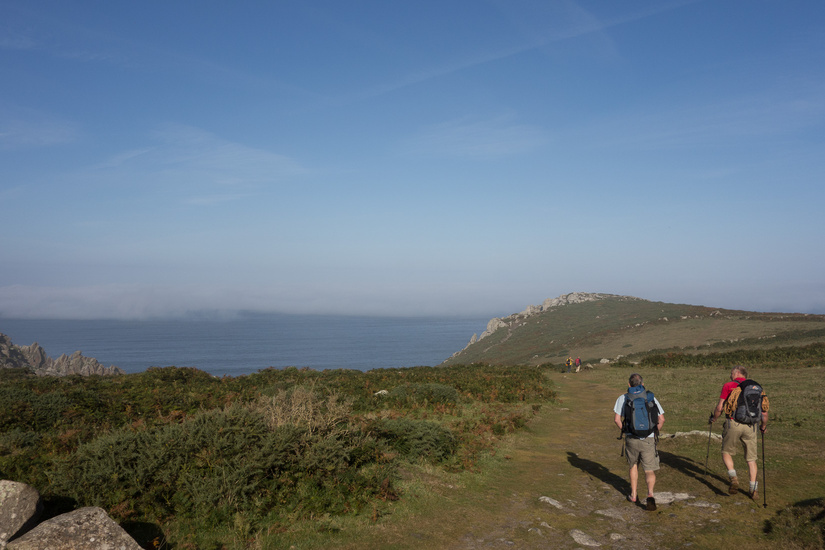 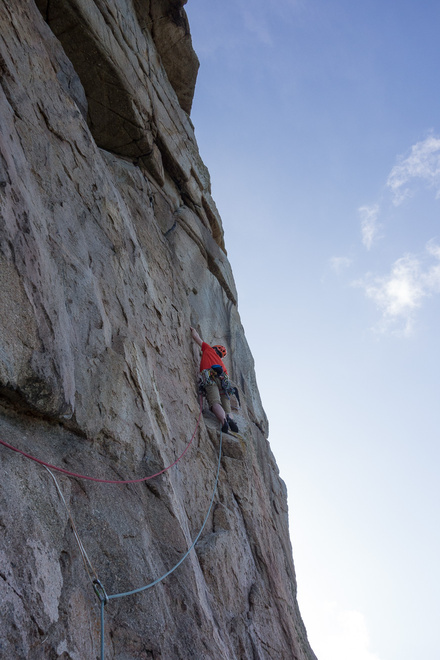 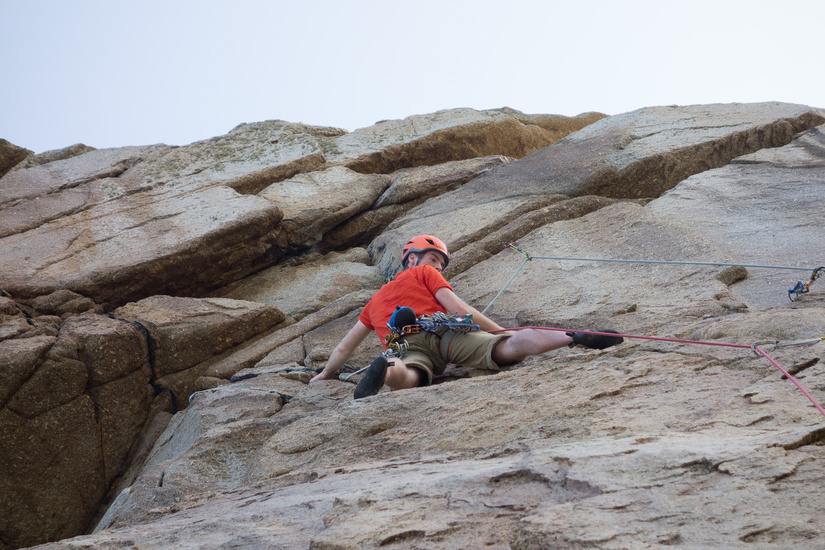 Just before the crux 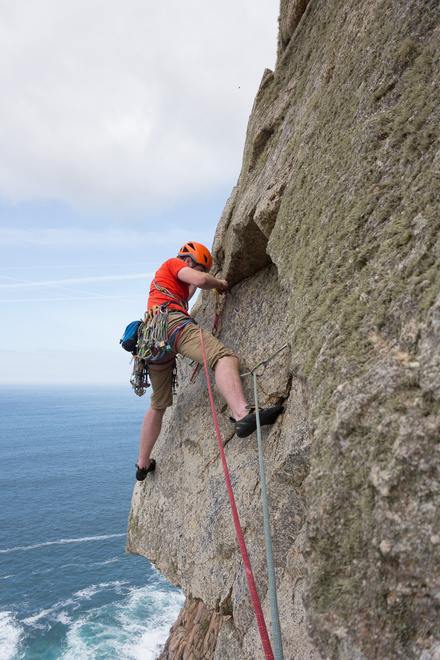 On the exposed traverse on P2 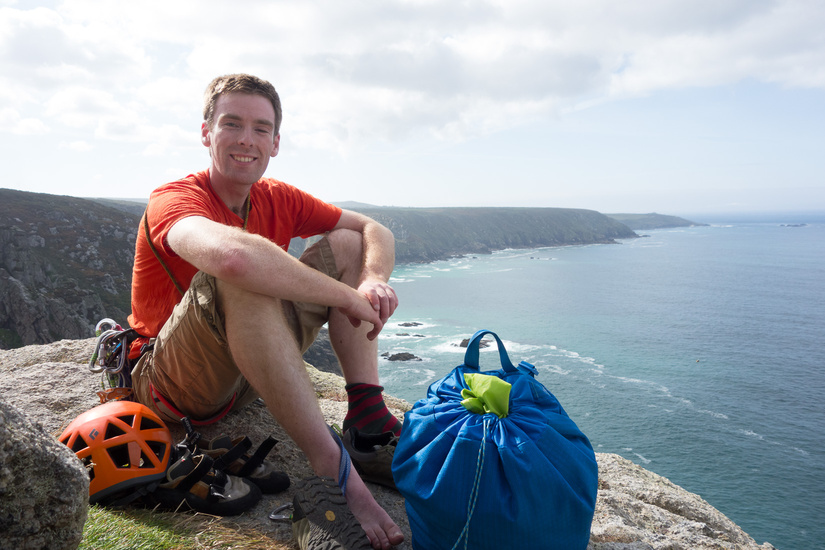 After a very long lunch we set up another classic route, Suicuide Wall. Rich lead up the first few pitches quickly which left me with the 5a traverse pitch and the 5c crux. The traverse was outstanding, with good, exposed but straightforward climbing. I spent ages setting up the belay with lots of crap gear equalised in addition to the two pegs, this was due to the 5c crux being off the belay, which meant that any fall would be a FF2. This certainly added some spice, and thankfully I didn’t end up testing the belay and got up the hard moves without too much difficulty. All that was left was the tough top corner, which Rich managed to get up after a few aborted attempts.

After this we made the short walk back to the Count House feeling very satisfied (knackered) after a brilliant days climbing, we spent the evening refuelling with good food and a plentiful supply of beer. 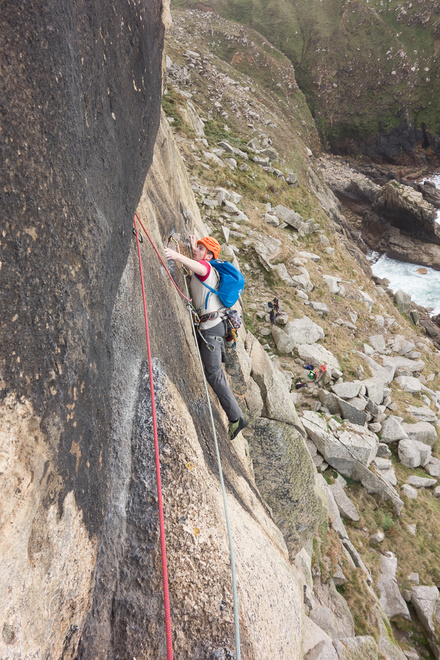 Rich on the traverse on Suicide Wall

I had big plans in Bosigran on the Sunday as well, however when I woke up I was feeling very achey and had a sore shoulder and lower back after my falls. Due to this we changed our plans and headed to Kenidjack. Here I started by climbing the classic E1 called Rock Dancer, I really enjoyed the route and it was nice to be climbing a route which wasn’t too difficult or scary which meant I was actually able to enjoy it at the time! The climbing was pretty sustained all the way to the top, and the gear was very good but spaced all the way to the top. After a quick bite to eat we headed back down so Nick could climb Thane, however when it got to the bold corner he decided against leading it so lowered back to the ground. I lead up to the corner on his gear, re arranged some gear before committing to the corner which ended up being very run out, but I was pleased with my composure while making technical moves a long way above gear. I quickly arrived at good holds and some more gear before carefully making my way up some loose rock to the top. 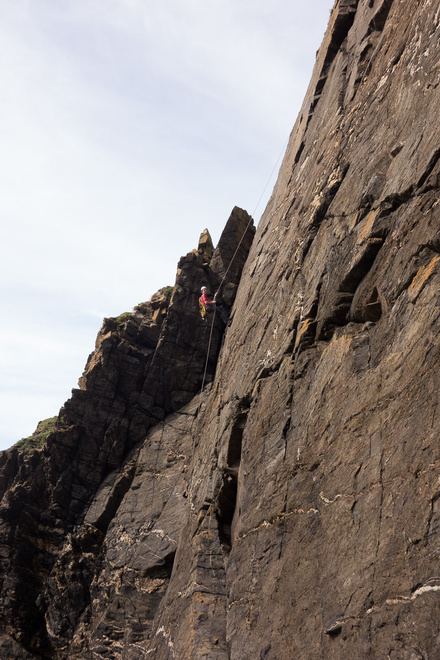 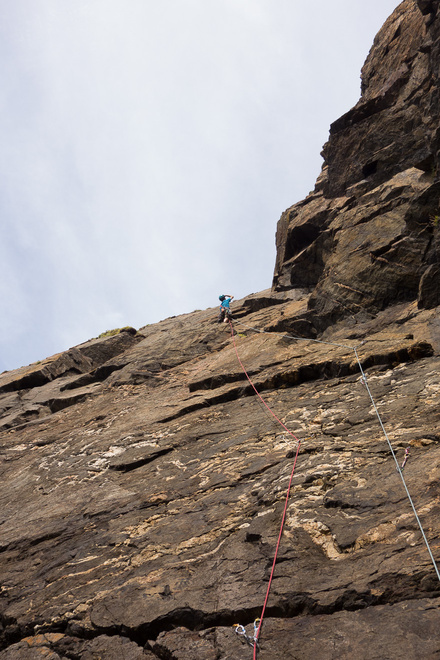 Nick eyeing up the bold corner on Thane 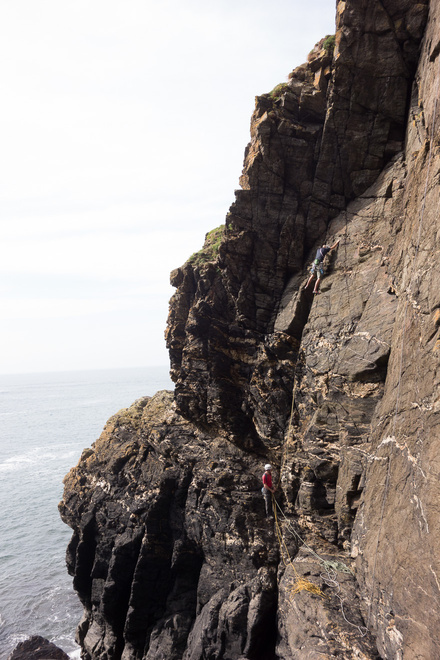 This is my last planned trip away rock climbing this year, which is sad as it has been such a fantastic year, although I do hope to get a few day trips in before my trad fitness fades into winter indoor fitness. I really feel like I have improved this year which is great as last year I felt like I was making no progress. I started this year feeling shaky at E1s, however I soon started to feel more confident at the grade and somehow ended up making the move to E2 in May and since then haven’t stopped attempting E2s, 24 in total! It is now time to start looking towards indoor climbing as the evenings have drawn in and hopefully the next few months will pass quickly and it will be time for some winter climbing.