I have just returned from an absolutely fantastic weekend in North Wales with the Avon Mountaineering Club. I spent the weekend climbing with Andrew, and we made the most of the dry weather by spending two days climbing in the Pass and one day climbing at Tremadog. Having never climbed in the Pass before, I never quite understood the hype about it, however having climbed there it is an utterly inspiring place, with great lines, on good rock, in a fantastic setting, what more could you want! Over the weekend we successfully climbed 6 routes, of which 5 were Rockfax top 50 lines, and I also got spanked by an E2 at Tremadog. The final ticklist for the weekend was:

We woke up on the first morning expecting it to be freezing due to a frost being forecast, however it was surprisingly warm. After a quick breakfast we headed out of the campsite early to ensure we got a parking space at the boulders before all the spaces were pinched by walkers. After a short walk and scramble we were soon at the small ledge at the base of Cenotaph Corner, our home for the day. The evening before I had been looking at Left Wall in the guidebook, but had dismissed the idea of climbing it due to knowing that it was hard for the grade. However, standing at the base of the route the line looked so inspiring and the idea of climbing it started to creep back into my head.

We soon located the start of Cemetery Gates, and after an awkward downclimb we were ready to start the days climbing. I headed up the route and instantly enjoyed the interesting climbing, and I was pleasantly surprised by how good the gear was due to the guidebook suggesting that it is poor. All too soon I was at the end of the pitch and it was time for Andrew to follow me, as usual Andrew made light work of the climbing and after a hasty changeover at the belay he was leading the easy top pitch. The abseil down the wall to the right of Cenotaph Corner was surprisingly enjoyable due to the wall being far steeper than it looked.

After some food Andrew began to psyche himself up for his lead on Cenotaph Corner, a route he has been wanting to climb for many years now. From the base of the route the corner looked pretty intimidating due to the steep walls on either side and the seepage appearing from the back of the corner, however this did not put him off and he was soon leading the pitch. He made short work of the damp lower sections, and enjoyed some good runout sections in the middle but unfortunately had to rest prior to the top section. On his second go he made it to the top, and he sounded very happy to have got there. It was soon my turn to climb, and I was soon at the top wondering what it would have been like on lead.

After another abseil, and with some gentle encouragement from Andrew, and some other climbers, I decided to give Left Wall a go. I wasn’t really expecting to get the top without falling or resting, but I think the pressure of it being an E2 got to me and unfortunately I didn’t commit to a move on the first section which I should have and rested, although this suddenly meant that I was under less pressure for the rest of the route. As I had already blown the onsight I decided to have another rest prior to the crux section, in an attempt to see if I could get it clean. However it was not to be, there was a move on the crux which I just could not fathom, and after a number of shouts to ‘take’ I finally committed to the sequence only to fail and take a decent fall onto solid gear. I was beginning to wonder if I was going to be able to do it, but I gave it one more go and managed to get up the the start of the traverse, while pumped I fiddled in a few small wires before committing to the easy traverse. However this traverse feels much harder when it feels like you can’t hold on! I was very pleased to get to the top, and I don’t mind that I didn’t do it clean, it was my first E2 and it is a good mental breakthrough for my climbing.

After this we headed back down to the car and the campsite, where we enjoyed a very British BBQ in down jackets before retiring to the pub in order to make plans for the next day. 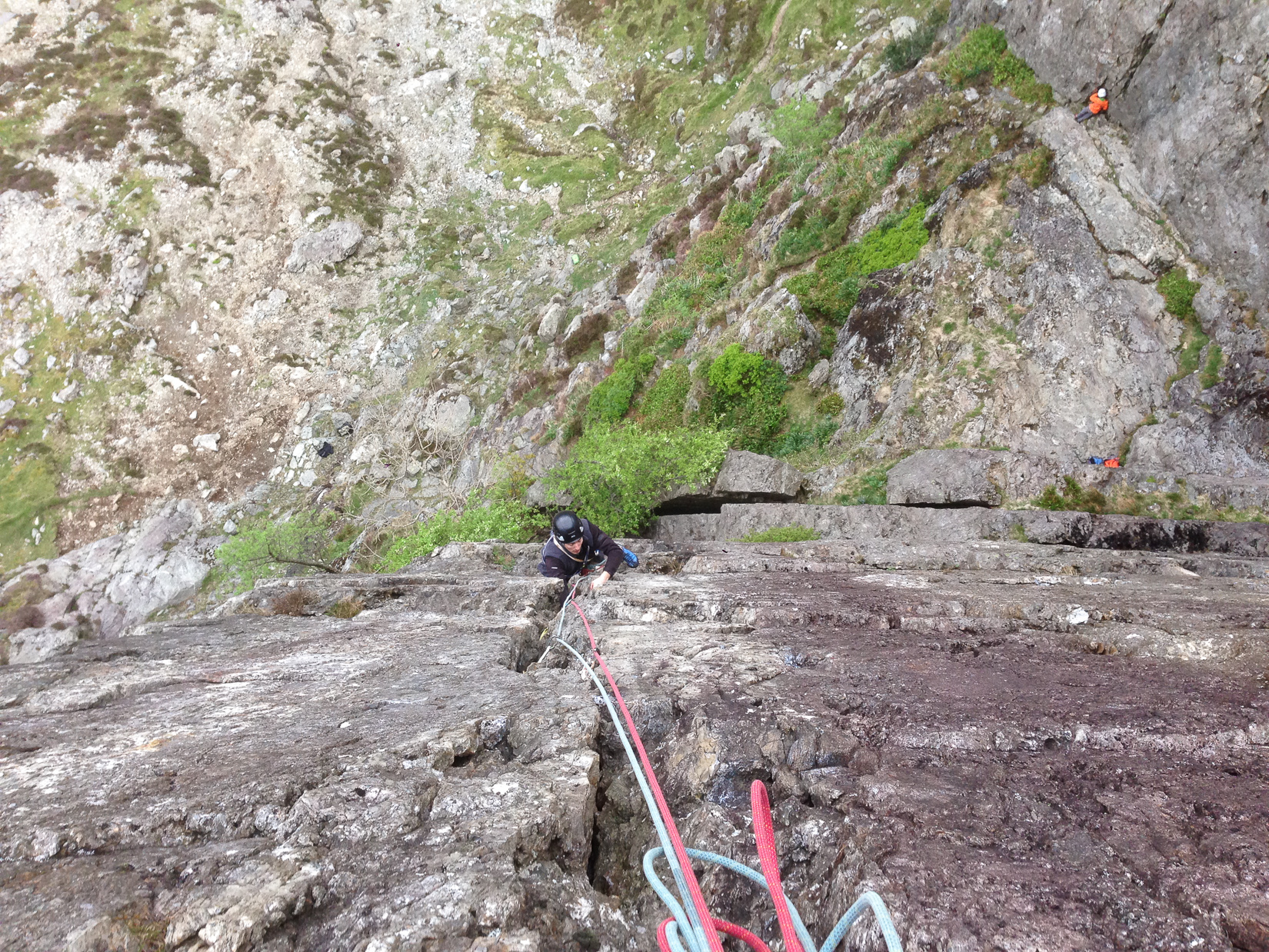 Andrew on the first pitch of Cemetery Gates

We decided to have a lie in and see what the weather looked like when we woke up, if it looked dryish we would head to Tremadog, otherwise we were going to head for the slate. Thankfully, it didn’t rain as much as forecast so we headed to Tremadog. The previous evening I had been eyeing up an E2 called the Weaver, and with some encouragement from Andrew we headed for the route hoping it would be free, as it seemed all of Snowdonia’s climbers had descending on Tremadog. We got there to find the route free and Andrew headed up the first pitch, this pitch looked straightforward from the ground, however once you were on it the climbing was far harder than it looked, the top move felt desperate. Andrew did a good job at leading the pitch and was glad for my micro cams to protect the top section. I soon headed off on the traverse and got to the base of a steep wall, and the guidebook certainly wasn’t kidding when it said it was steep! I arranged a number of OK runners before deciding to commit to the overhang, however once I committed I realised that there wasn’t really anymore gear for a while, after a few more moves I got to some “jugs” and a gear placement which would have been great, had it not been for the rock being hollow. After looking down and seeing how far my gear was below me, I fiddled a wire in and refused to climb above it due to not wanting to fall on it. After a very cautious “take” the gear didn’t rip, after considering my options I decided to bail off the route having been thoroughly spanked. 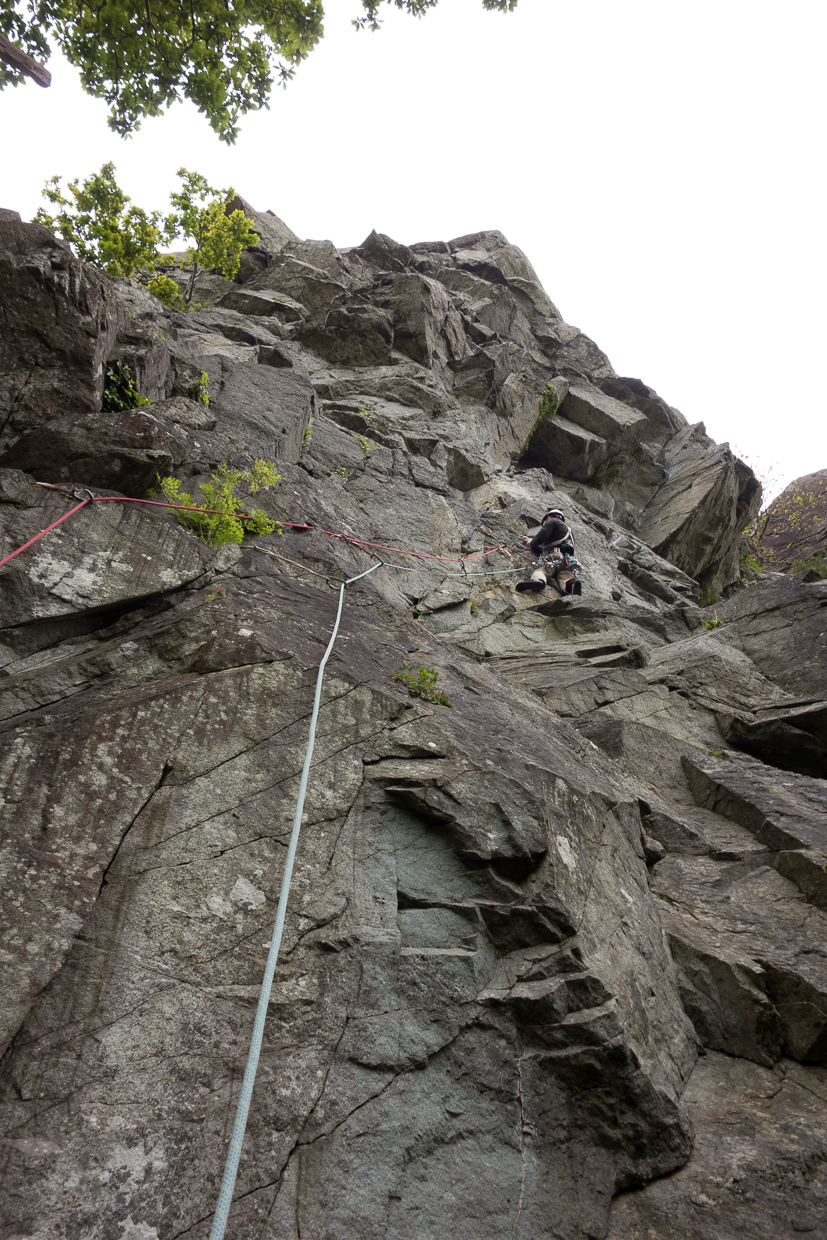 Andrew on the fist pitch of The Weaver 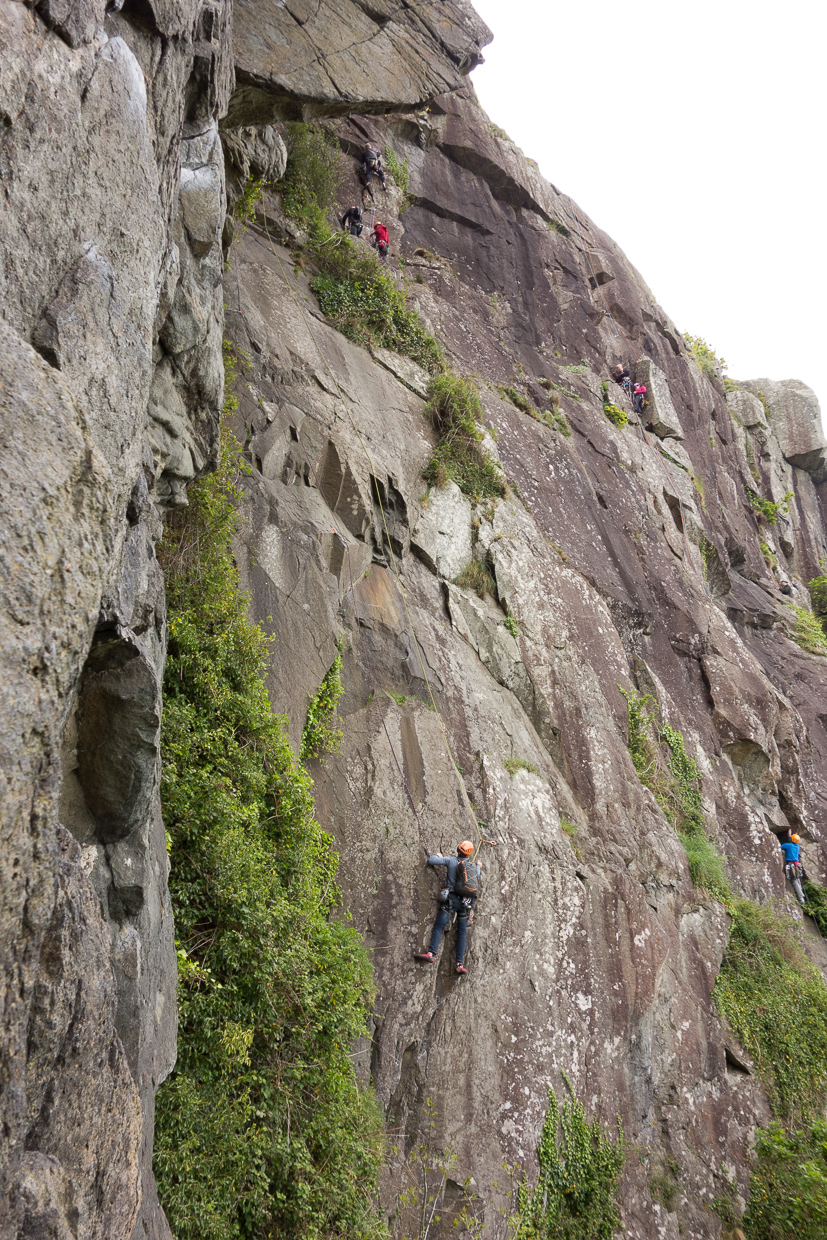 We headed over to the nearest E1, called Grim Wall Direct, which was great as it had two 5b pitches which turned out to be completely contrasting and fantastic. It was Andrew’s lead so he headed up the first pitch, making light work of technical climbing around spaced gear with a good runout in the middle. We were soon at the belay where we were able to chill out waiting for Dave and Emma to finish the second pitch. After an enjoyable break, it was soon time for me to start climbing, after my previous lead attempt it was good to be on a route which wasn’t too difficult, but more importantly was so well protected you were able to chose to climb past bomber placements. 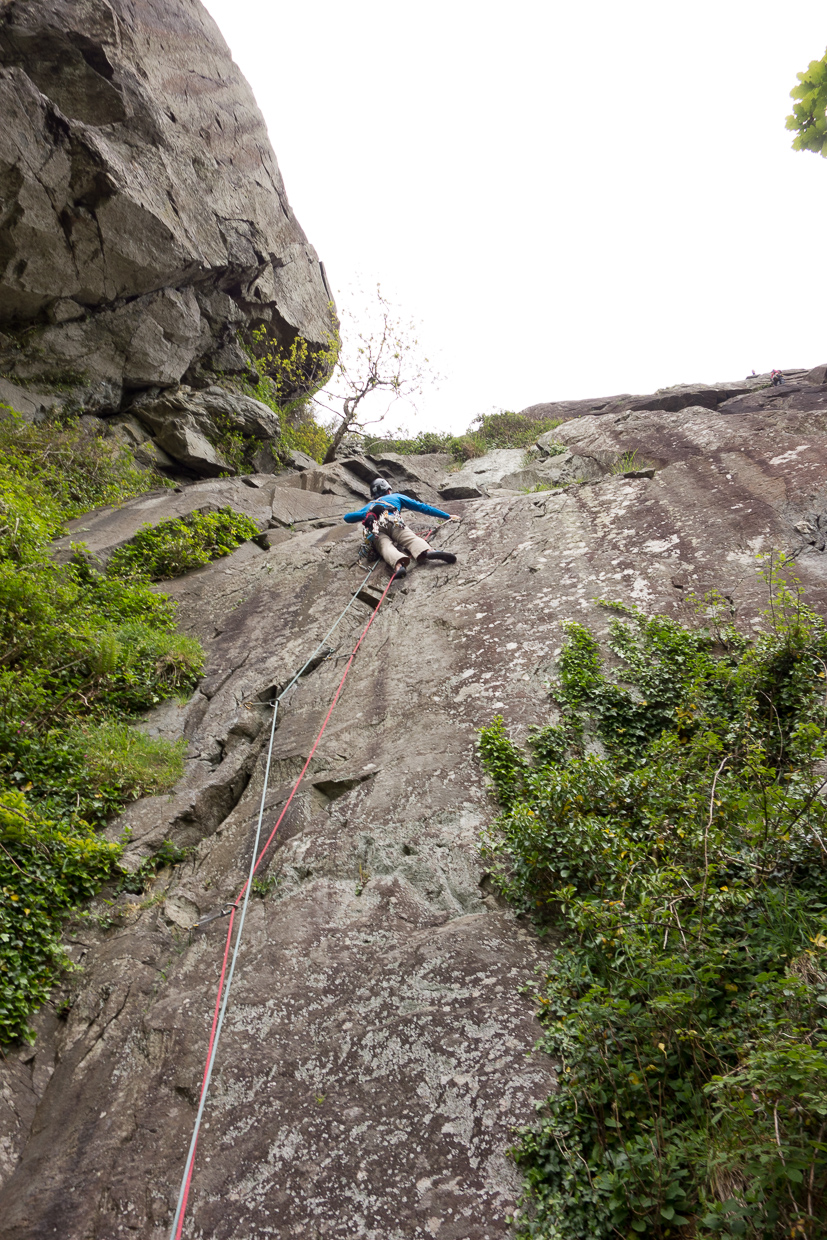 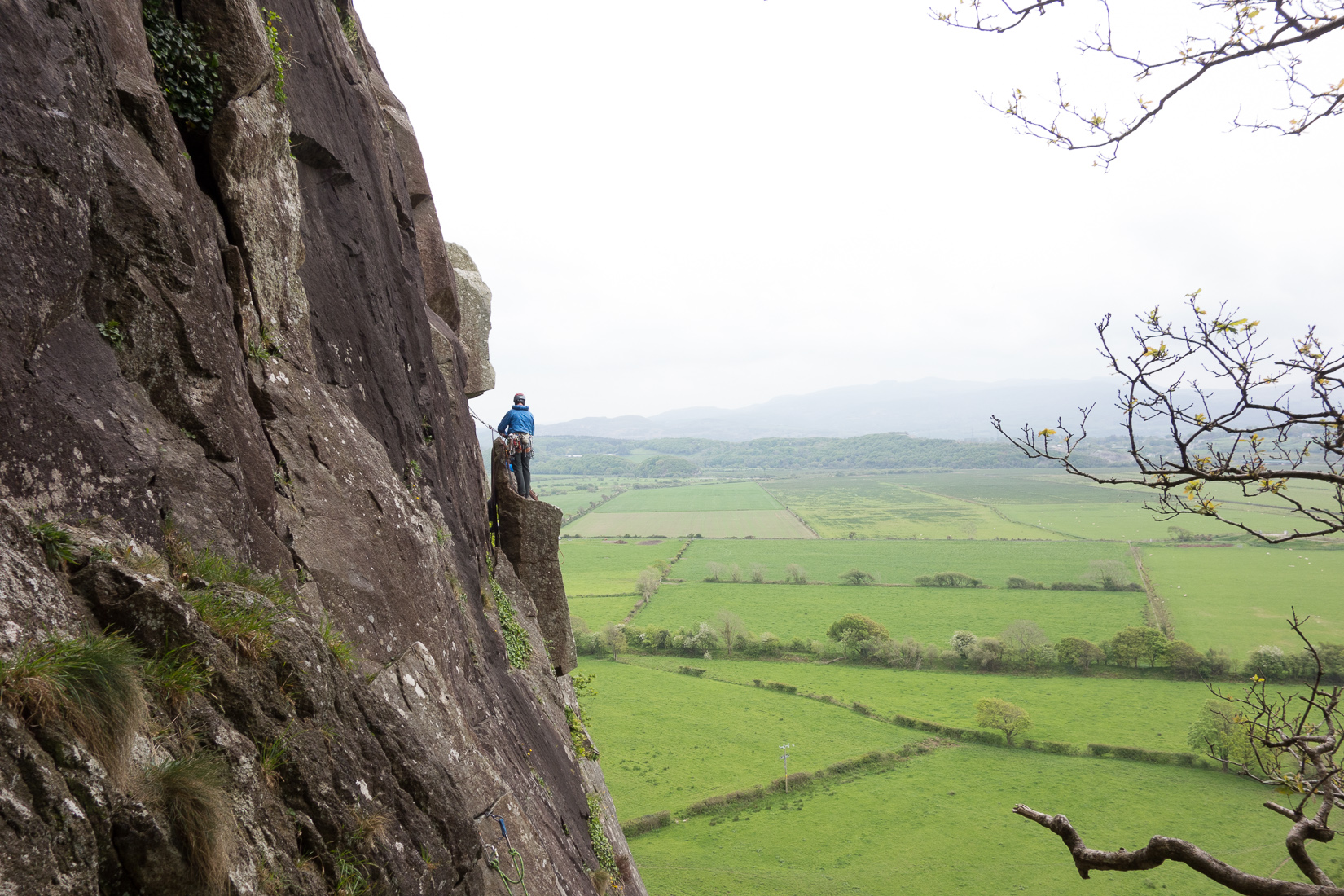 View from the belay 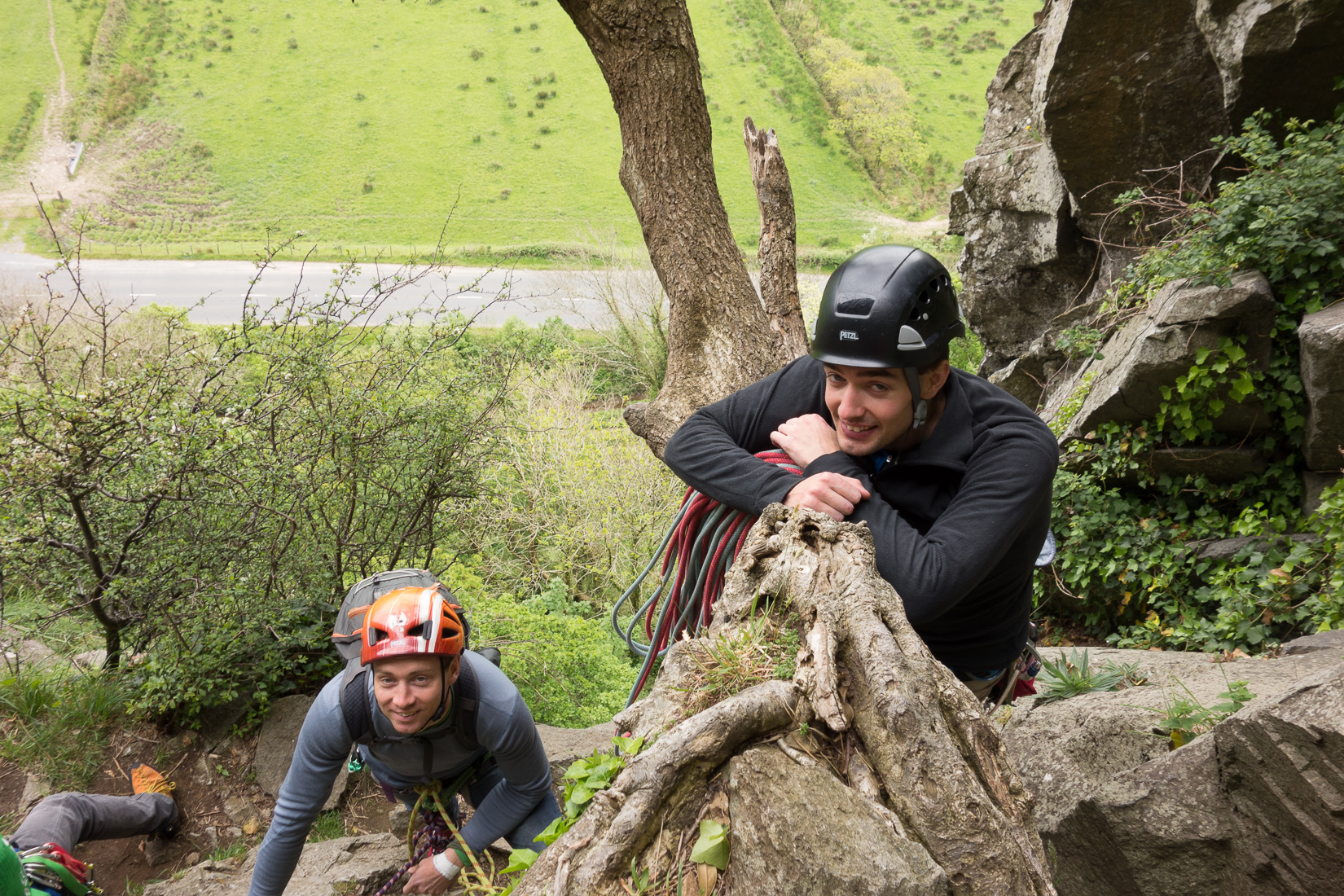 We headed down to the car for a well deserved lunch as it was now the middle of the afternoon, due to the time we didn’t want to commit to another multipitch route which we found hard as we had to be back in Nant Peris for a pub meal. So we headed up a classic VS, One Step in the Clouds, we didn’t know anything about it when we decided to do this, other than it was a multipitch VS which people had been queueing for all day, however we were hoping that it would not have a queue now it was late. Thankfully we were correct, and we were soon climbing the route, it was a fantastic climb with the second pitch being the highlight. It was a great way to end the day as we were able to relax and completely enjoy it, I didn’t even bother with my rock shoes. At the top of the second pitch I met up with a team who had just climbed The Weaver and managed to get my nut and prussik which I had left on the route back which was even better. 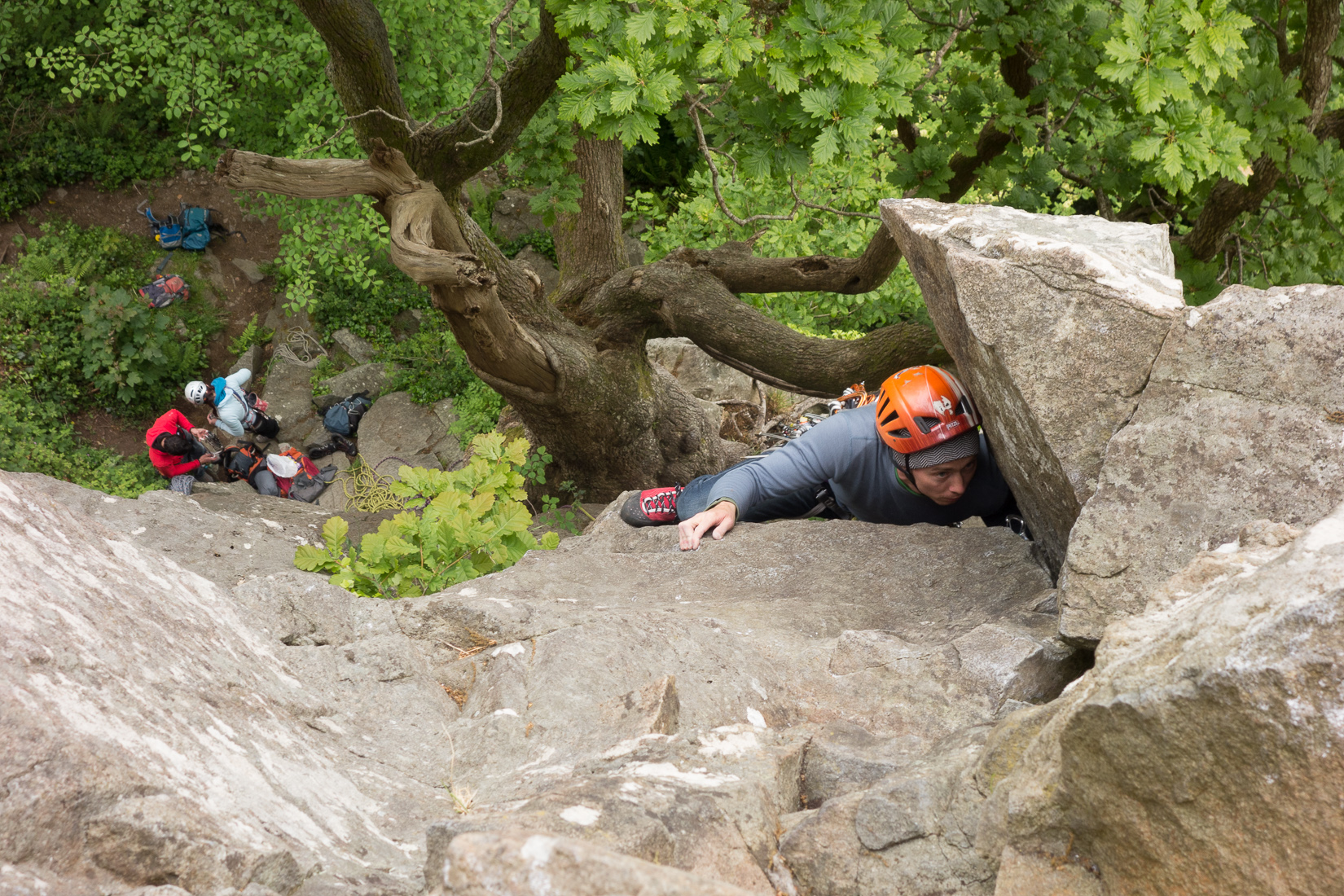 The forecast for Monday suggested that it would be raining by lunchtime, so we got up early and packed the tent up in order to climb the classic E1, Superdirect, on Dinas Mot. I knew it would be exposed to the wind but I wasn’t quite prepared for how cold the wind would be. I lost the coin toss which meant that Andrew got the second pitch, so I headed up the first pitch and was forced to wake up quickly due to a very bold but easy traverse to the first belay. This belay was fully exposed to the wind and was utterly freezing but the view was fantastic, I was very glad of the belay jacket once Andrew got to the belay. Andrew set off up the main pitch and was soon at the start of the crux, a very thin traverse left with only micro wires for protection. Thankfully he quickly committed to the sequence and climbed the entire pitch reasonably quickly which meant that I didn’t need to wait any longer on the belay, I was doing a full on winter belay dance in an attempt to keep warm. 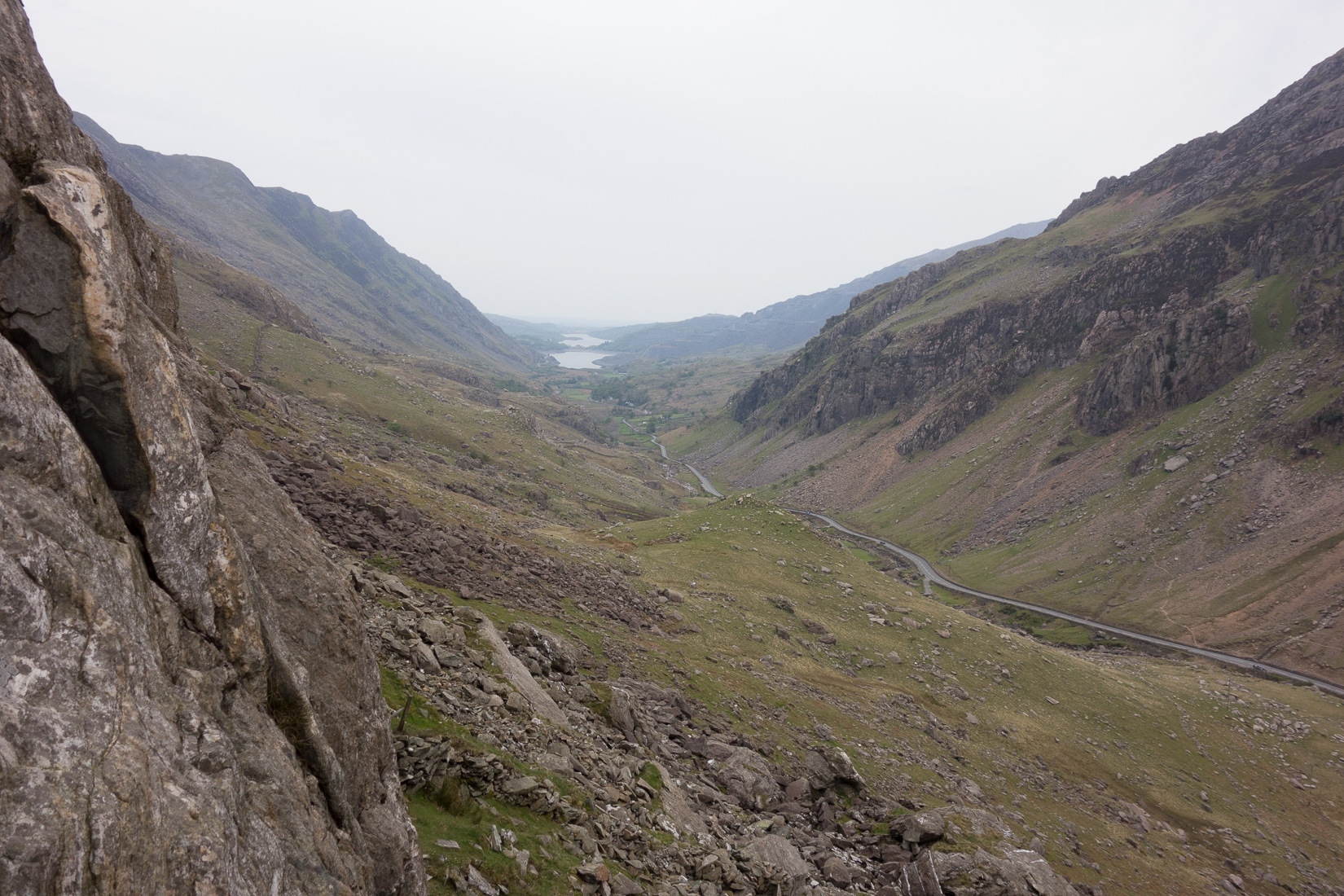 View down the pass from Dinas Mot 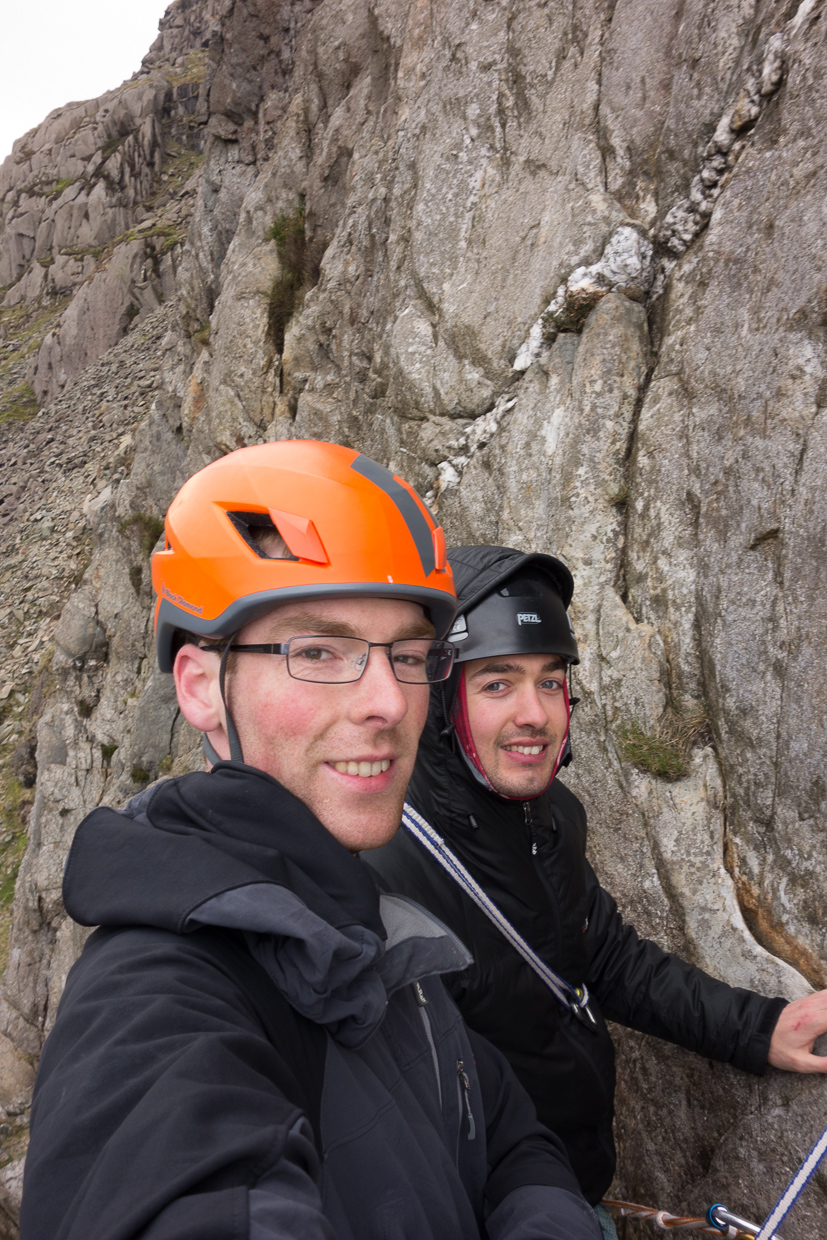 At the first belay on Superdirect 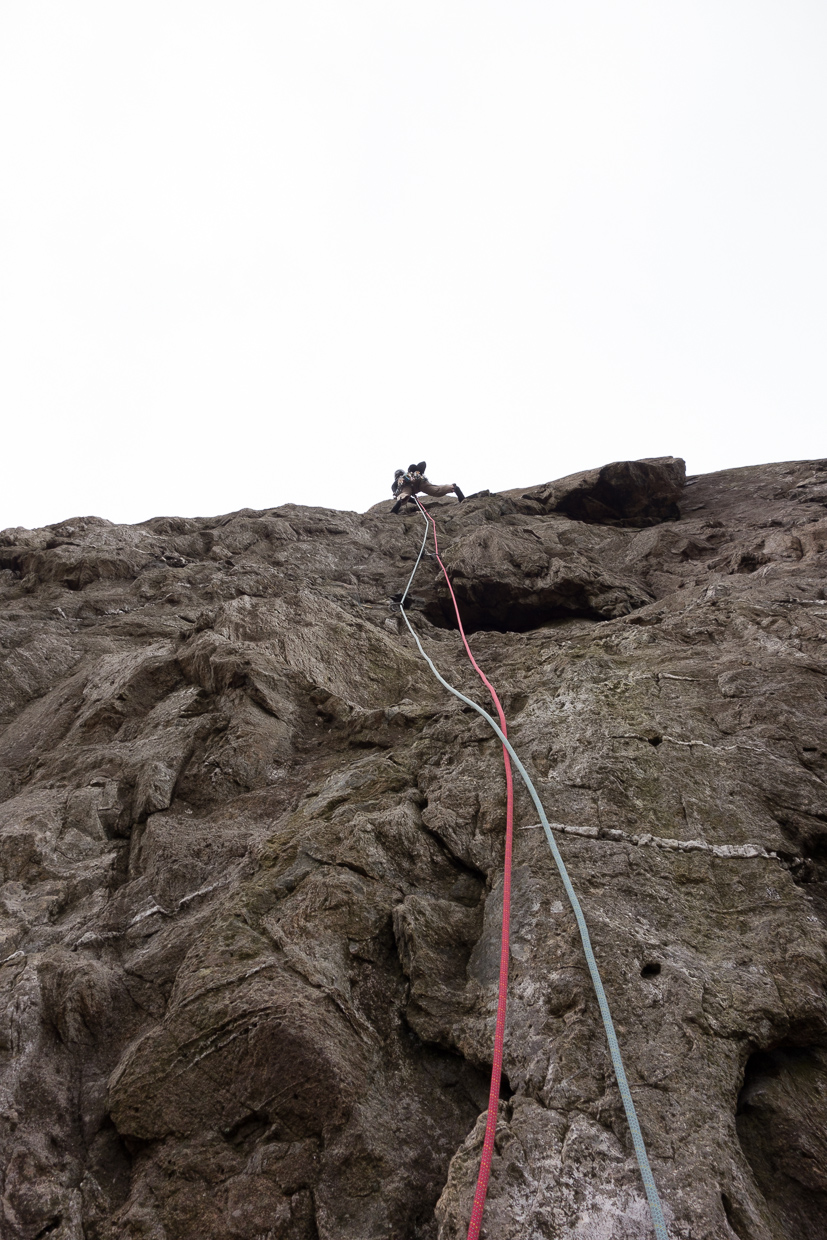 Andrew about to start the crux on Superdirect 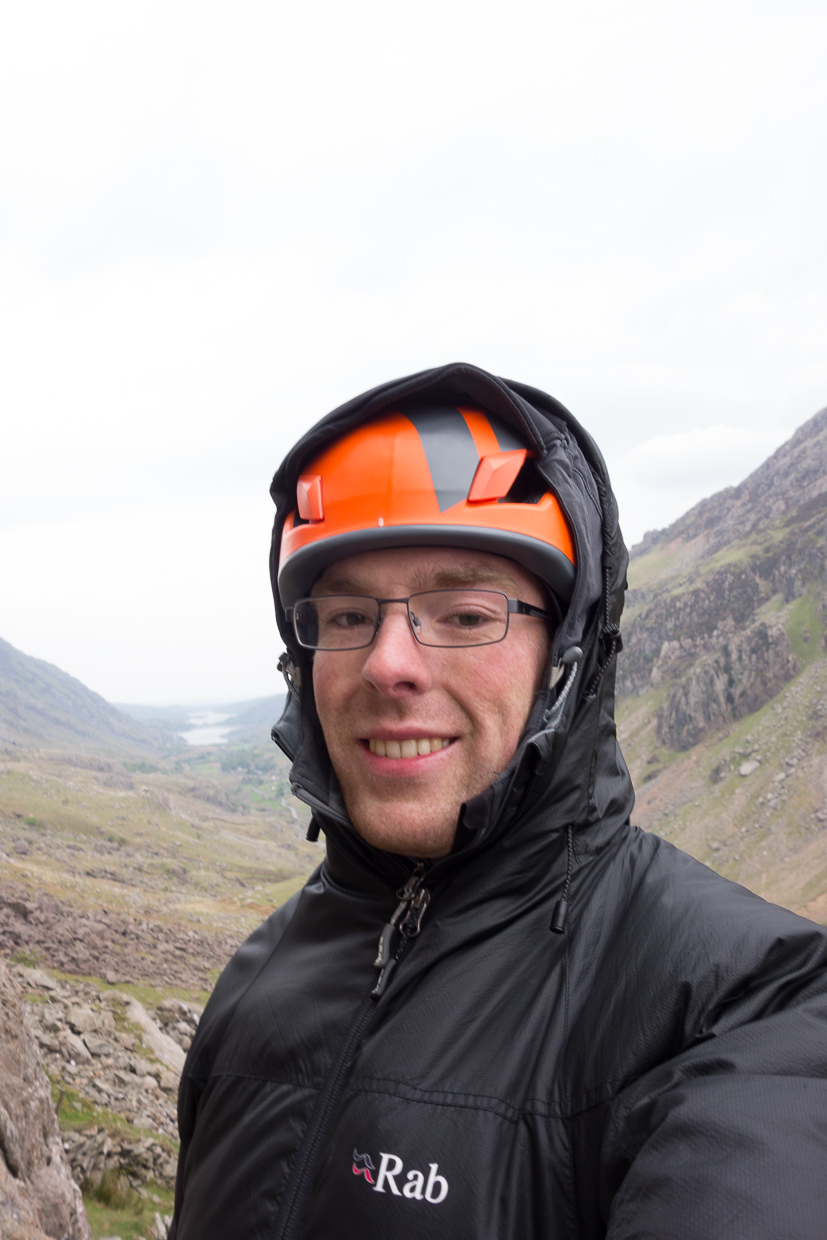 I soon headed up the third pitch, but unfortunately went off route due to aiming for some tat, once I was at the tat I couldn’t climb and further and I couldn’t reverse my climbing so lowered back the ledge and Andrew climbed up so we could discuss what to do. Upon looking at the guidebook it was obvious where I had to go, and I was kicking myself for focussing on the tat and just climbing towards it. I headed back up the pitch and was soon in a good rest below the final corner, from this point I thought I might be able to reach the gear I placed off route to the left, but while reaching around my foot slipped and I fell off. At this point I think a lot of naughty words came out of my mouth as I was very annoyed, as Andrew had agreed to get them while seconding anyway. I got back on the route and quickly committed to the final strenuous corner and was soon at the top of an absolutely fantastic route. I am annoyed that I didn’t get the route clean due to getting lost, but I didn’t fall off or really struggle with any of the climbing on the route which something at least. We quickly abseiled off to get out of the wind and we were happy to be back at the bags out of the wind, and with more layers to put on.

We headed down to Pete’s Eats in Llanberis after the route where we were meeting up with another member of our car, and by this point I was broken having worked a stupidly long week at work before having a very intense weekend of rock climbing, at this point I was very glad I had insured Andrew on my car as he was able to drive back while I dozed in the passenger seat. I am going to struggle to beat the ticklist from this weekend, having climbed so many classics and it is one of the best climbing weekends I have had.