Tour of the Vanoise

Along with a friend I was involved in organising a hut to hut walk somewhere in the Alps this summer for fifteen members of my university expedition society. We decided to head to the Vanoise National Park where there is a dedicated hut to hut walk called the GR55 or the ‘Tour of the Vanoise’. The entire route is a 10-12 day tour but due to only having a weeks holiday we modified the route slightly just to do the eastern loop of the Vanoise over five days. The route was to start and finish at Tignes 1800 where we were staying in a youth hostel and headed up to the Refuge de la Leisse on the first night, before carrying on to the Refuge du Lac Blanc on the second night, Refuge de Vallonbrun on the third night before descending down into Bonneval-sur-Arc before the final days walking up to the Col de l’Iseran and heading down into Val d’Isere.

The first days walking started out in the rain though with the forecast set to improve we were optimistic, though there was an extra 300m of height gain todo as it turned out the hostel was in Tignes 1800 and I thought it was at Lac de Tignes! As we were walking up the grim ski slope the weather started to improve just in time for us to get to the far more beautiful valley as we left civilisation. Though once we got to this valley I was met by a surprise as we hit the snow line with around 300m of ascent still to go, due to the snow not being frozen it was fine to carry on without crampons though the navigation was harder as we had to avoid rivers below the snow as well as following vaguely the correct path in a very wide valley and it meant that combined with the extra ascent the first day was significantly harder than I had anticipated. We arrived slightly late at the Refuge de la Leisse but it was set in the most beautiful location and was so isolated it was fantastic. The food was surprisingly good as I was unsure of what to expect having stayed at many high mountain huts and hardly been able to eat anything before and combined with some friends telling me the food was awful, though the guardian was new and she did a fantastic job!

We woke up the next morning to crystal clear blue skies and a stunning view down the valley with an easy days walking ahead of us, it was lovely being able to relax on the walk and not have to rush, especially after the rushed descent from the col on the previous evening to ensure we made the hut for dinner! We had lunch in a fantastic location about 10mins from the Refuge du Plan du Lac with stunning views down the valley we had just walked from with the Grande Casse in the background. We arrived at the refuge fairly early and the thunderstorms hadn’t arrived yet so we headed down to the lake for a swim, and I was expecting the water to be freezing as it was only the middle of June however it was surprisingly pleasant, though the hut guardians thought we were mad! During a fantastic dinner the thunderstorms arrived which made for some atmospheric photos and made us appreciate being inside a very warm hut with great food rather than outside camping in the rain.

The third day did not go quite to plan, after an atmospheric start to the day as the moisture from the thunderstorm burnt off the weather cleared into another beautiful day, though around half way through the day one of the people on the group badly injured her knee which meant the end of the hut to hut walk for me. We descended down into the valley which was actually a fantastic descent with stunning views. After Joey had been to the hospital we had to get back to Tignes where my car was and the youth hostel and due to a surprising lack of public transport and Joey’s insurance not paying for a taxi we decided to hitch back, though there was a Porsche festival on in this small alpine town so it was a bit surreal hitch hiking while being passed by loads of Porsches and while standing in front of one! We did eventually get back to Tignes after two lifts though it wasn’t without more adventure on the way as on the second lift we were involved in a (thankfully) minor car crash!

The next morning I headed up to Val d’Isere to do a Via Ferrata that I have been wanting to do for 5 years which the most difficult Via Ferrata in France, however for some reason it was shut so I headed up another Via Ferrata, Les Plates de la Daille, graded difficile+ which was great, though on my own it hardly took me any time. After I had completed this I went for a short walk up the Gorges du Malpasset which was a lovely gorge that I walked up five years ago in the dark on the way to an alpine summit, we then drove up to the Col de l’Iseran and down to Bonneval-sur-Arc to meet up with the rest of the group for dinner before heading back to the youth hostel as I had to be up early the next morning as I was doing a solo alpine summit (see next blog).

It was a shame not to be able to complete the full walk with the group but I still had a fantastic week and really enjoyed my alternate walks despite being alone for two of the activities. Due to being able to meet up with the others in Bonneval-sur-Arc I don’t feel like I was away from the group for too much of the week as I only missed 2.5 days of walking and one night with them. 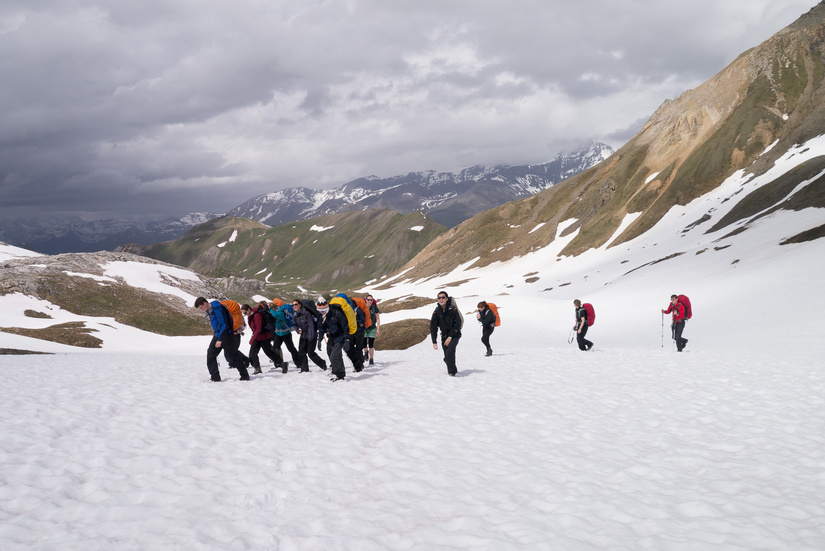 Walking up to the Col de la Liesse in the snow 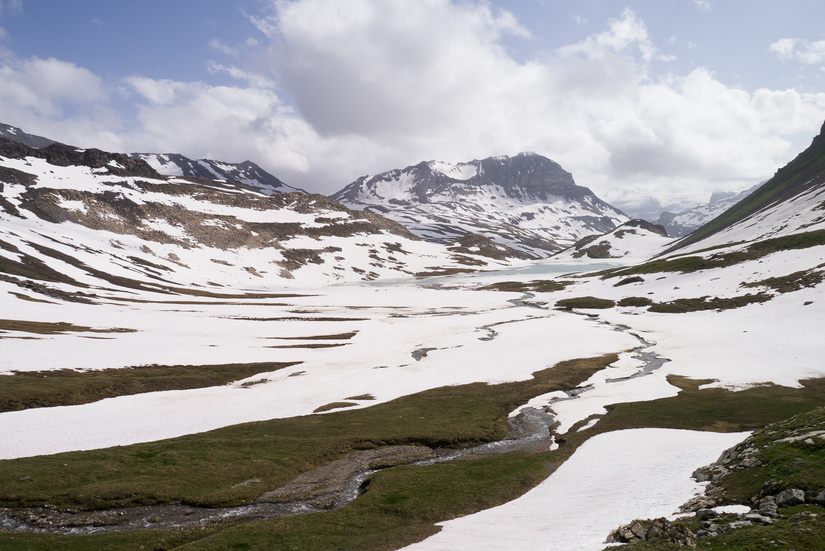 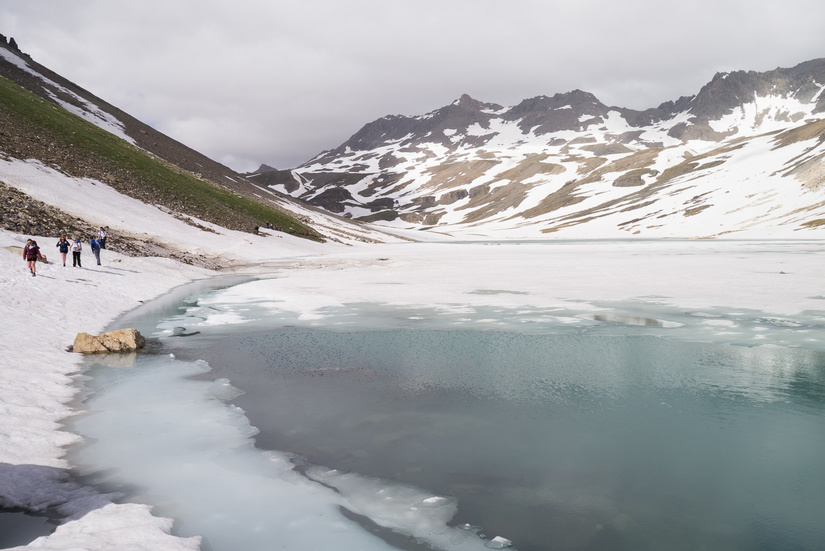 Walking past the frozen lake 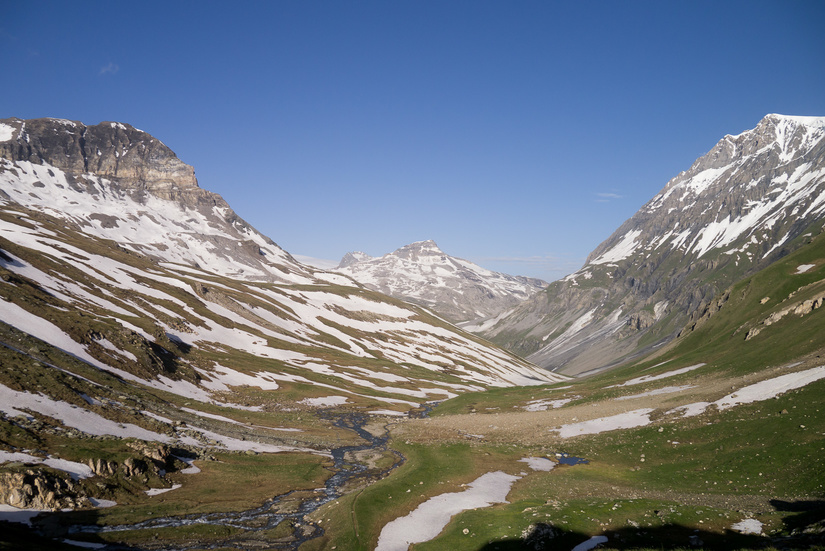 View from the Refuge de la Leisse in the morning 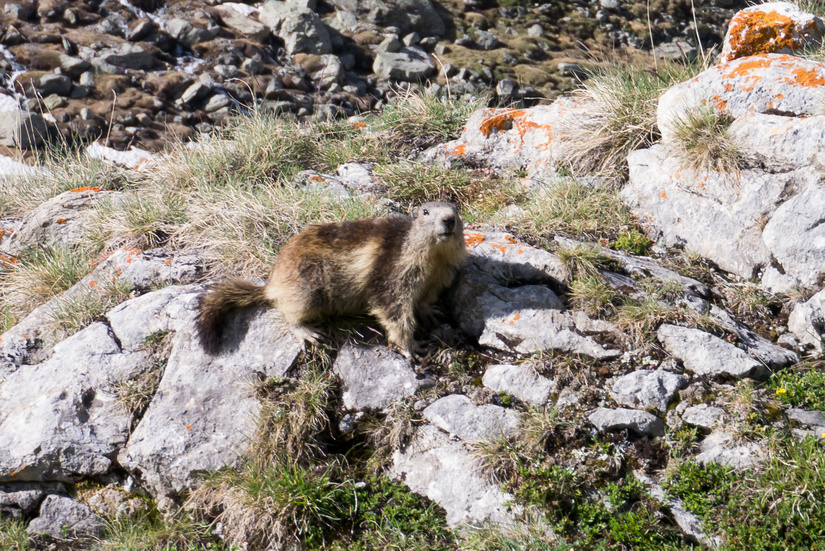 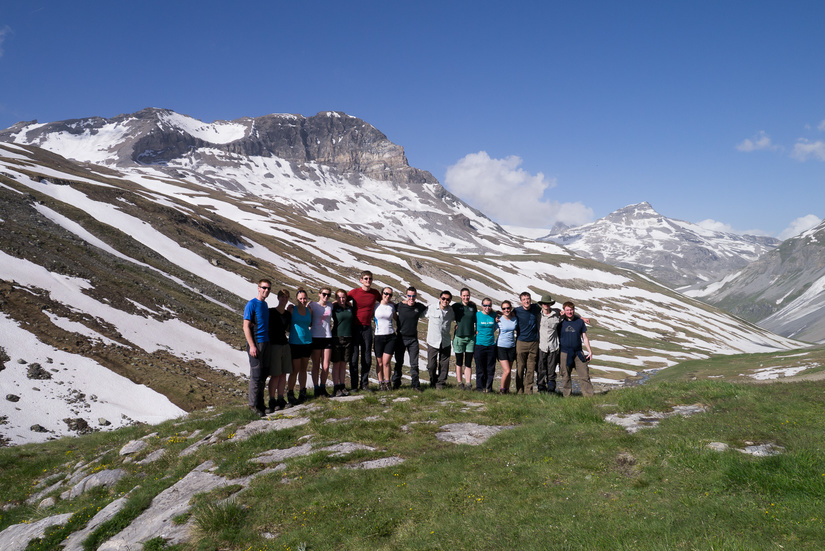 Group photo on the second morning 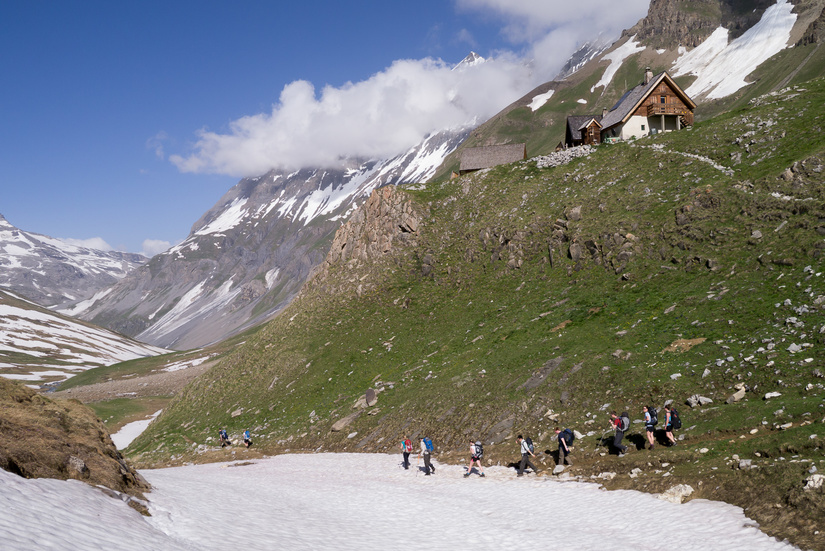 Walking away from the Refuge de la Leisse 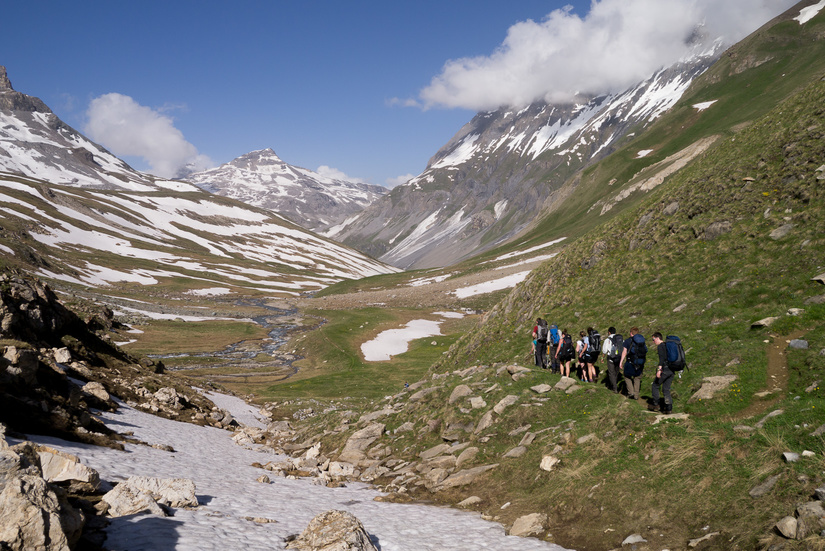 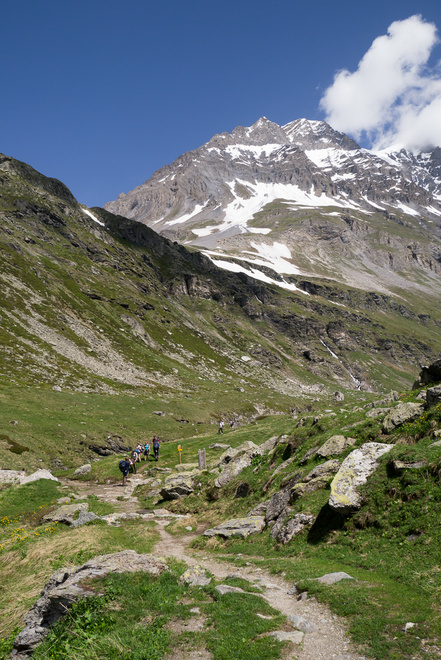 Walking away from the Grande Casse 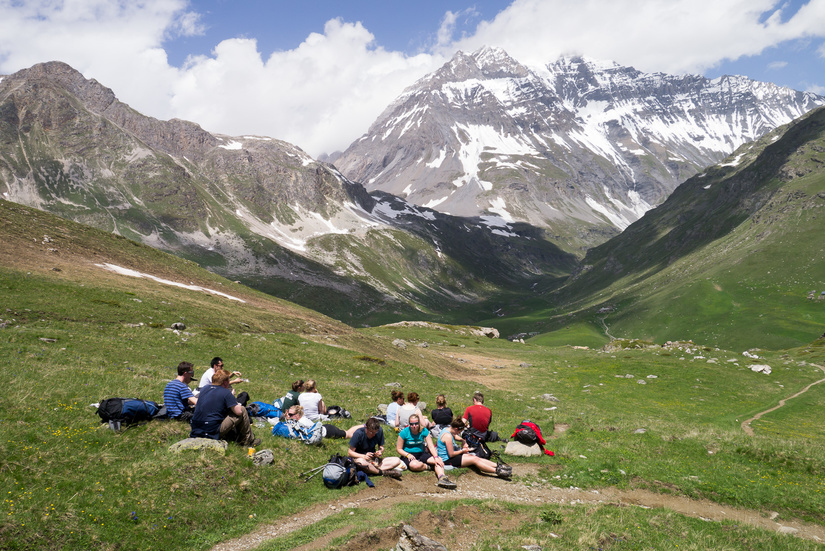 Lunch stop with a stunning view of the Grande Casse 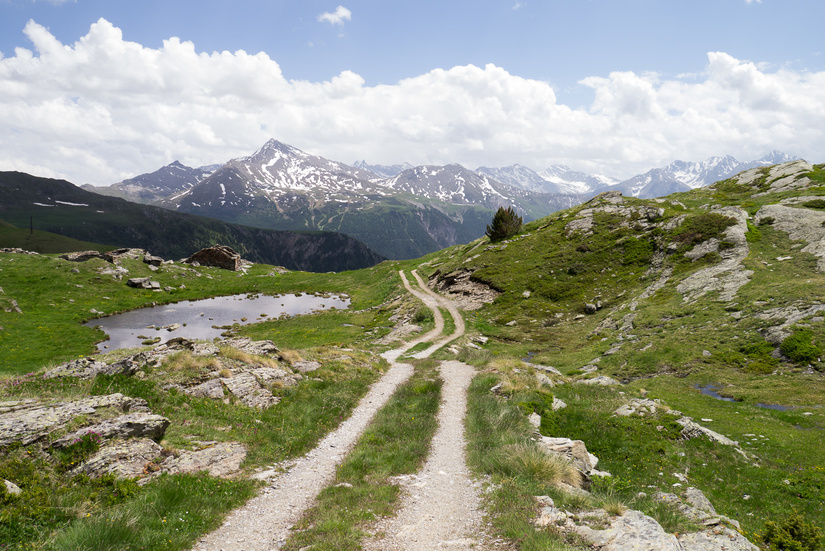 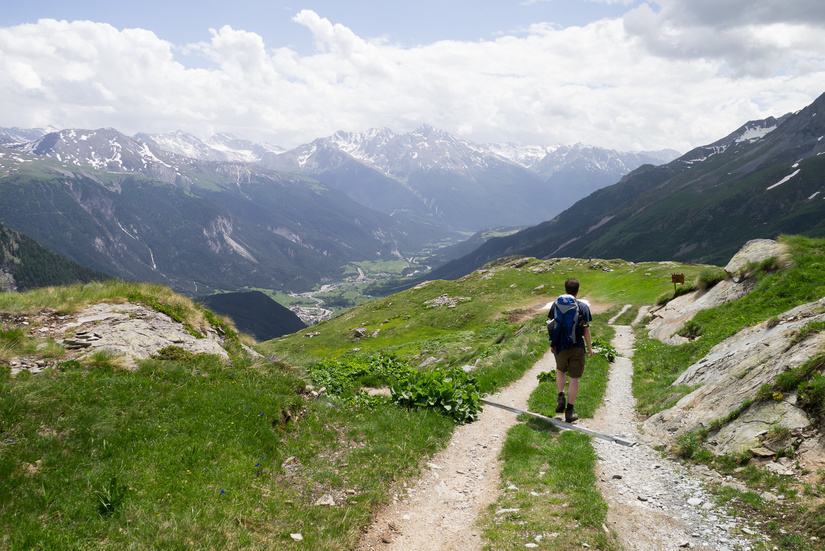 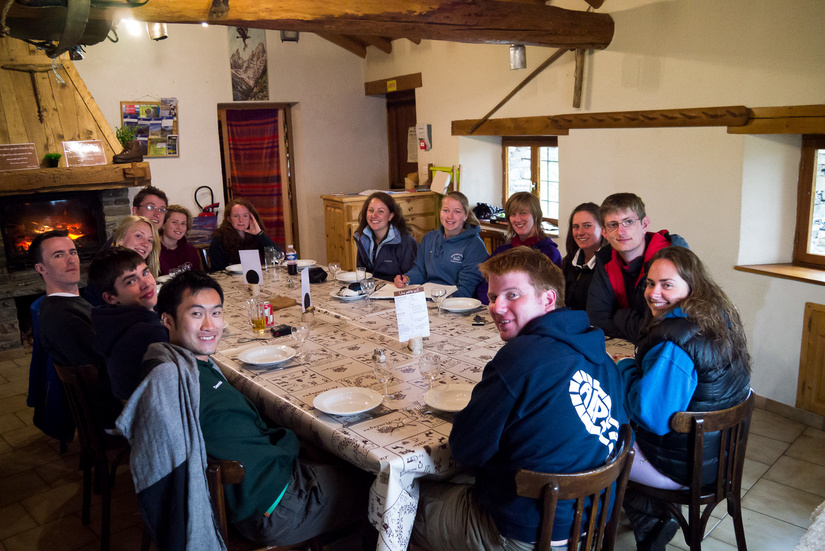 Around the dinner table at the Refuge du Lac Blanc 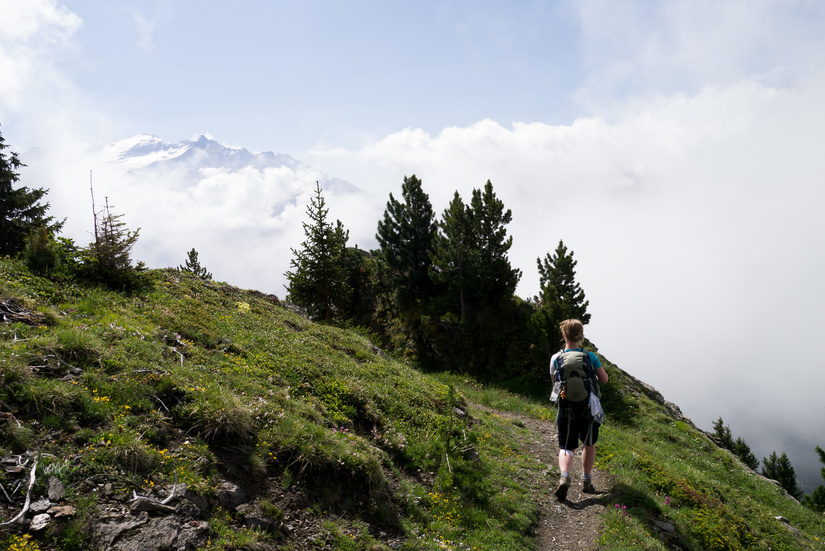 Atmospheric Walking on the third day above Termignon 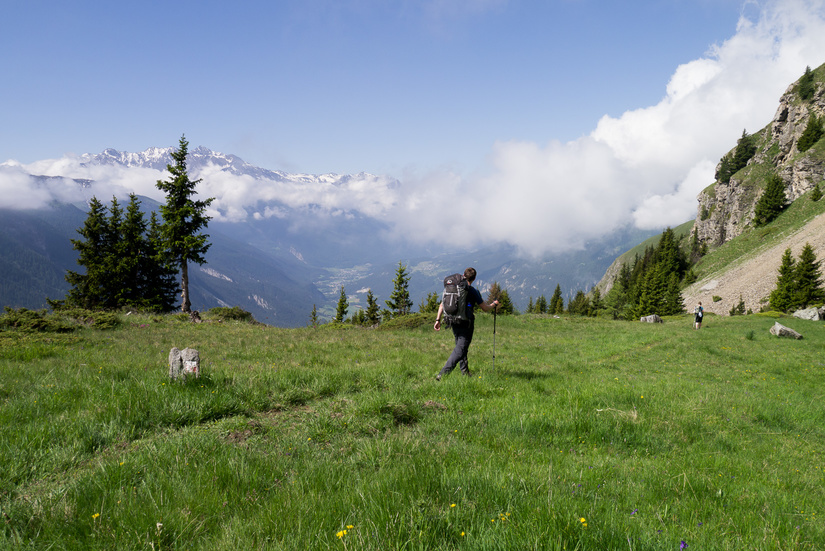 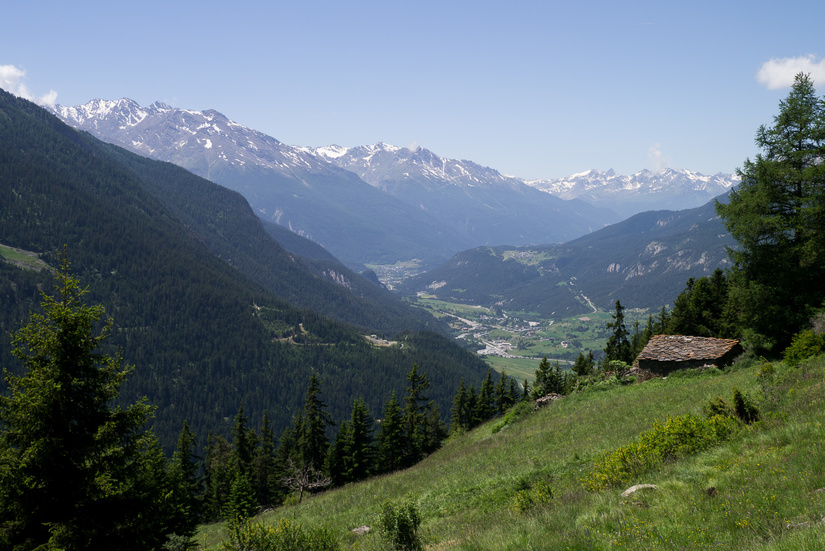 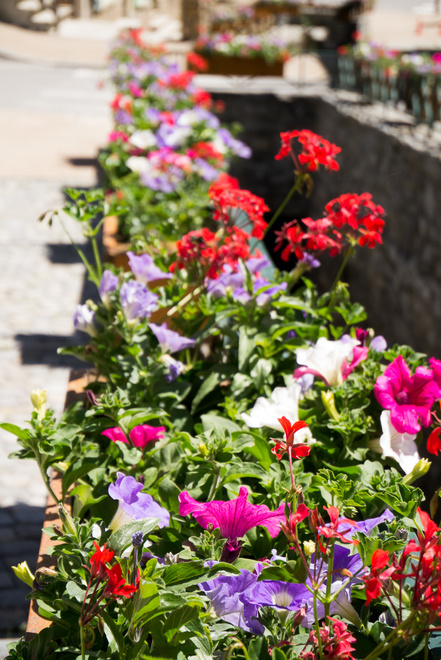 Flowers in the village 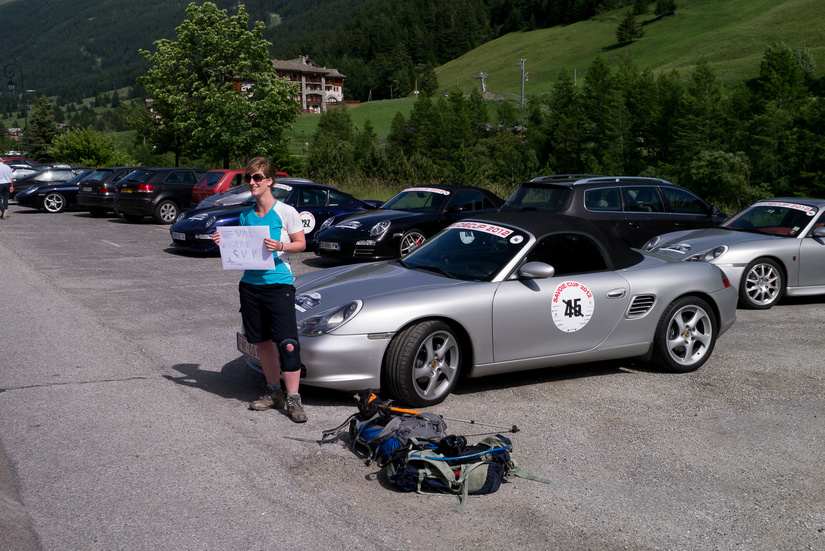 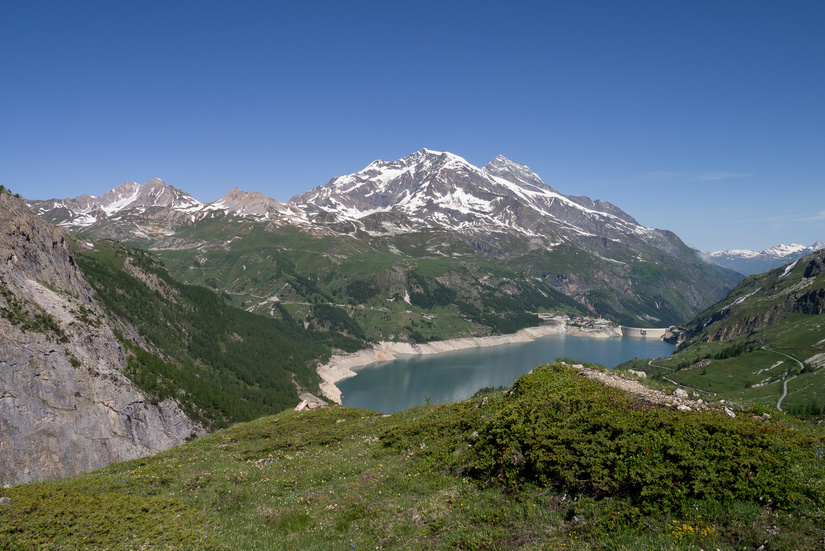 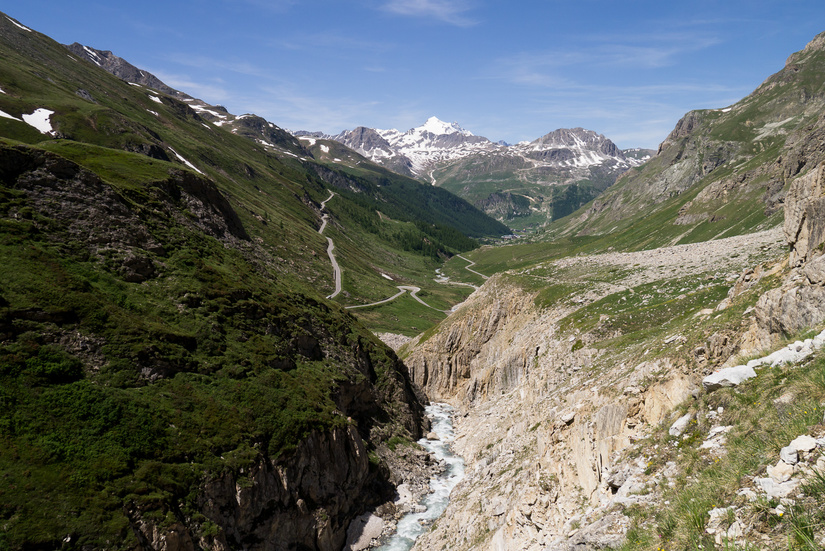 View back towards Val d’Isere from the Gorges du Malpasset Flowers in the Gorges du Malpasset 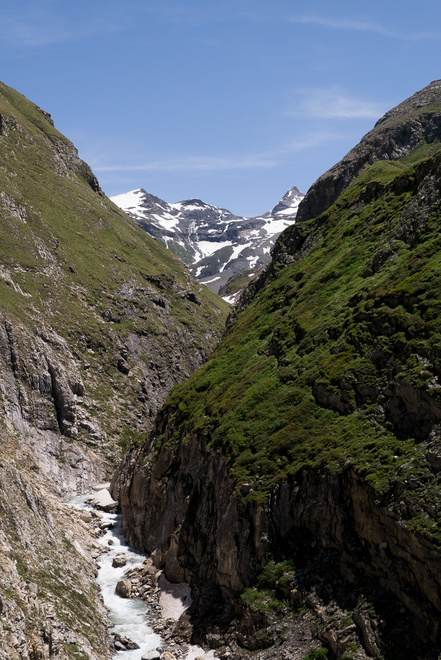 View up the Gorges du Malpasset Panorama while driving up to the Col de l’Iseran View down towards Bonneval-sur-Arc while descending from the col Sunset from the top of the Col de l’Iseran