On our bank holiday weekend in the Lake District we managed to do a surprising amount of climbing considering the amount of rain which was pouring down over the rest of the country. On Sunday when we drove up after the tents were setup we headed to Shepards Crag in Borrowdale where I lead the classic VS which was Adam. I found it fairly high end for VS due to some tricky climbing and also some runout section on easier climbing higher up the route. Having said this the climbing was fantastic, it was my first time on the rock type which is found on Borrowdale which is a kind of volcanic rock and thought it was fantastic. After this Dad lead Aaros which was my first E1, albiet seconding not leading, but was great to get some harder climbing under my belt as a second to improve my own climbing.

After we finished our 6 hour mountain day on Monday and got back to the campsite, instead of relaxing and enjoying the sun we headed out to Quayfoot Buttress to climb Mandrake. Mandrake was a fantastic HVS which had loads of interest, though it was my first multi-pitch climb with three people and I discovered how much of a faff it was to climb with three people on multi pitch routes! I loved the climbing on Mandrake though I did very nearly fall off due to not being able to work out what todo with my feet on the crux, though I was saved by a great little finger jam.

On Tuesday morning we headed out early before the rain and started on Conclusion, another E1 which Dad lead. I was really pleased with my climbing at the bottom but unfortunately lost my balance slightly on the crux and managed to fall off which was a shame. After we had completed this we thought we had time for another route, so we headed up a HVS, Kransic Crack Direct, which was fantastic climbing with some fist jamming to get up to a traverse before some bold moves over the crux lead to protection and easier ground. As I was belaying Mum after after me some spots of rain started to appear so after this we aborted back to the car and headed to Keswick to hide from the rain.

Our last day was Wednesday and we headed out scrambling in the rain in the morning. When we got back we packed the tents up and instead of driving home we headed to Shepards Crag again as it had stopped raining around lunchtime. I attempted to lead a HVS 5a++! route from the selected climbs and after many falls over the sustained crux had to give up due to being so tired I could hardly hold on. This is the first route I have had to back off of, and I hope it doesn’t happen again too soon as it made me feel very defeated. After this I climbed Fishers Folly, a VS next to Kransic Crack Direct. I climbed it with my Mum and we lead through so I lead the first pitch and she lead the second, it was the first time I have done this. The climb was fantastic with a technical first pitch and an airy traverse on the second pitch.

Overall the weekend was fantastic and could only have been improved by a bit less rain. My favourite routes of the weekend were Kransic Crack Direct and Fishers Folly though Mandrake was not far behind at all! 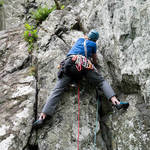 Climbing Adam (VS 5a) 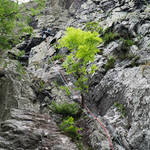 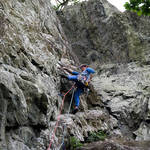 Starting the poorly protected section of Aaros (E1 5b) 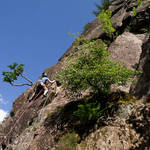 Hand Traverse on Mandrake (HVS 5a) 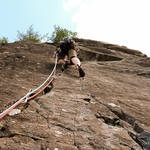 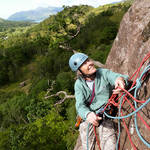 First belay on Mandrake (HVS 5a) 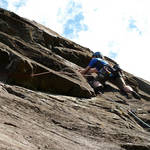 Approaching the overhang of Mandrake (HVS 5a) 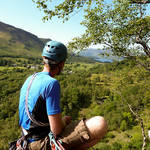 Belaying at the top of Quayfoot Buttress 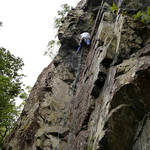 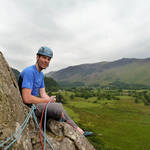 Belaying at the top of P2 of Conclusion 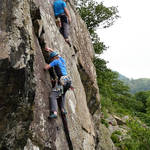 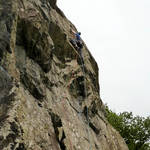 Above the crux of Kransic Crack Direct (HVS 5a) 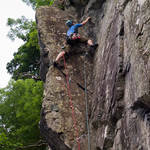 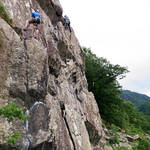 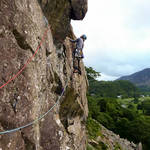 Traverse on P2 of Fishers Folly (VS 4c)