Limestone Climbing in the South West

With the recent sunny weather I have again been spending time out on the rock. I spent a day at Chudleigh Rocks in Devon with my house-mate where we climbed a lovely HVD route called Wogs to warm up before climbing Never On a Sunday (HS 4b) as Steve’s first Hard Severe. Ignoring the first few meters it was a lovely climb with a balancey move around an overhand on the first pitch and an airy traverse on the second pitch. It was also not too polished which was a nice change for Chudleigh which suffers quite badly from polish on some of the easier climbs.

As the weather then went from being ok to being sunny and 25 degrees I headed back to Bristol for a few days to go climbing in the Wye Valley. On the first day I went climbing with Jackson and in the morning we headed to Wyndcliffe and climbed the two classic VS routes of Questor and Cadillac which were fantastic. In the afternoon we then headed to Wintour’s Leap to do some multipitch climbing on the North Wall. Due to a minor route finding issue at the bottom of the crag we accidently climbed Joe’s Route which had some nice climbing on but due to being an abseil route was very dusty, we then managed to find the climb that we intended to do and went up Nibelheim which was a great climb up the north wall in the sun.

The next afternoon I headed to Shorn Cliff with my mum to spend an afternoon climbing at HVS which was fantastic, there we climbed Bitter Battle Tears, The Laughing Cavaliers, Organ Grinder and Tigers Don’t Cry. The first two climbs were fantastic slab routes which I really enjoyed and didn’t find too difficult apart from a few moves. We then headed to Organ Grinder which is a line up a flake and climbing up the flake was fairly tiring, especially when placing gear and definitely got the adrenalin flowing! We finished the day on Tigers Don’t Cry which was a finger crack, it seemed significantly harder than the rest of the climbs and I took my first proper lead fall on it, where I fell around 2m. Though I wasn’t going to give up and persevered until I got to the top without about two extra falls after the first one!

Due to not making any more trips home until July this was probably my last hard climbing session for a while as none of my climbing partners in Exeter can climb at HVS, so it was great to get so many done in an afternoon. 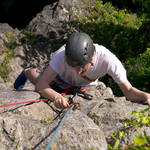 Never On A Sunday 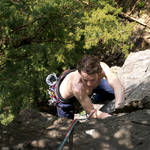 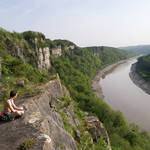 On the great ledge at Wintour’s Leap 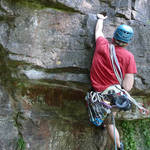 On the bolder problem start of Bitter Battle Tears 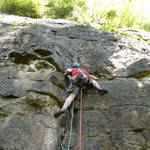 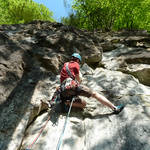