Last week I was up in Scotland for a week, the intention was to go winter climbing but after stunning and really hot weather the two weeks before we headed up there was very little ice left so the prospect of doing any winter climbing was looking very unlikely.

However due to a sudden change of weather over two days, from having a BBQ on the first evening then on Tuesday morning we woke up to several inches of fresh snow and freezing temperatures, this mixed with a northerly wind quickly sent Ben Nevis back to great winter conditions on the easier routes such as Gardyloo Gully. Armed with a positive weather & avalanche report from SAIS stating that on the northern aspects there was a low avalanche risk due to the northerly wind scouring the faces we made the decision to get up early and head up the north face of Ben Nevis. 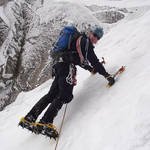 We  headed up to the CIC hut very early leaving the car at 7am and got to the CIC hut less than two hours later where we had to hide from the bitter wind as the weather forecast was not as good as expected, so we layered up and made the climb up Observatory Gully towards Gardyloo Gully (Winter Grade II/III) as the weather improved all the time. It was hard going up Observatory Gully due to all the fresh snow which had accumulated on the flatter slopes, though eventually the gradient steepened as as it did the snow quickly changed into beautiful hard névé. After some steep climbing we arrived at the start of Gardyloo Gully where we roped up and started climbing. The first two pitches were fairly straight forward but seriously lacked any protection. On the first pitch I placed one piece of gear and set up a belay at the second as I was approaching the end of the rope and hadn’t found any protection for ages! Once we got to the third pitch the gradient steepened again though now there was enough gear to protect the climb, there was even some ice towards the top where I was able to place some very sold ice screws.

At the top of the third pitch was the start of the ice cave which was fairly unique, here there was also a fantastic ledge to belay off and once Andrew had climbed the pitch we enjoyed a fantastic lunch on the sheltered ledge with a fantastic view. Once we had finished refuelling I started climbing the ice pitch which was a surreal experience, climbing up into what can only be described as an ice cave which the exit was a short vertical section of grade III,4 ice according to my guide book. After the cave there was the final steep slope up to the summit where I set up an ice axe belay and belayed Andrew up while I was providing much amusement to members of the public that couldn’t believe that I had just climbed up the gully.

Once we got to the top the views were absolutely fantastic and the conditions were amazing, there was almost no wind so we spent two hours at the summit waiting for the others in our group to arrive who climbed up Ben Nevis via the Carn Mor Dearg Arete. Once they arrived we headed down the Pony Path with them as the sky cleared to provide us with a beautiful sunset as we walked down to the Ben Nevis Inn for a well deserved pint after a fantastic day. 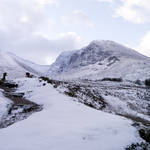 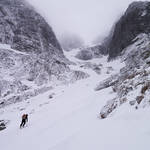 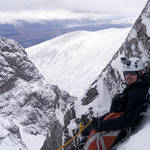 On the second belay 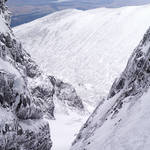 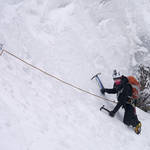 Ice at the top of the third pitch 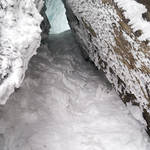 View up the Ice Cave 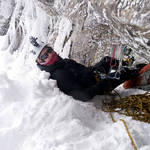 The ledge at the top of the third pitch 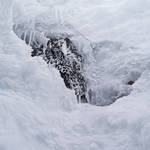 Steep ice pitch at the exit to the ice cave 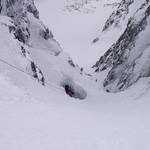 Andrew climbing out of the ice cave 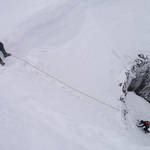 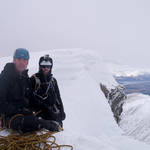 At the top of the climb 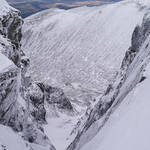 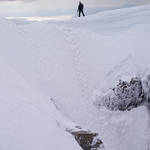 Andrew standing at the top 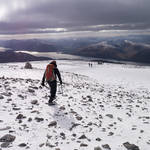 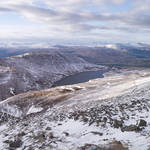 Stunning weather on the descent

One Response to “Gardyloo Gully”