When Scottish Weather Fights Back!

Over the new year I headed up to Fort William in the Scottish Highlands for some winter mountaineering and climbing, the weather however thought otherwise! Over the 9 days we were up there we had to battle with gale force winds most days, rain/snow every day though due to a thaw there was no snow when we got there, but the fresh snow then lead onto having too much snow with a huge avalanche risk! We did however do stuff on all but one day which was the day the whole of the UK was hit with storm force winds! Over the course of the week there wasn’t a time when there was snow and a low avalanche risk so we couldn’t get in any winter climbing, though we did manage two great ridge walks in winter conditions and another aborted walk in winter conditions. On the days that we couldn’t walk due to the weather being too bad we went biking at low level, but on each day we went biking we kept finding closed paths due to storm damage, we ignored these signs on the first day and ended up having to carry our bikes over/through lots of fallen trees!

The first walk we did was up the north east Stob Bàn and down the west ridge, there was a weather window early in the day so we got up before light and walked in the dark for 2 hours in an attempt to get to the first ridge before the cloud arrived, unfortunately the cloud came in earlier than forecast and was there when day broke. The ridges were great and I think would have been stunning if we could actually have seen anything! Though this was the one day of the holiday where the winds were low so being out on the mountain was nice and relaxing without having to worry about standing upright and the wind chill.

For our second walk the weather was supposed to be better to the east so we got up before daybreak again and drove over to the Cairngorms National park, where we climbed Càrn Bàn Mór with the intention to then walk along a ridge and do a horseshoe walk, though when we got to the summit again we were in hill fog, but also winds that you could hardly stand up in and horizontal frozen snow which was incredibly painful if it hit any exposed skin, so after finding the summit with the aid of GPS we aborted off the mountain back down into relative shelter.

After this walk there were a couple of days that we could not go up high due to the amount of snow/wind that was forecast so we went mountain biking again, but we also went to Ice Factor where you can go indoor ice climbing with a top rope. So not only can you practice/learn indoors out of the wind with no spindrift, you can also learn in complete safety and improve your skills before you hit the ice outside. 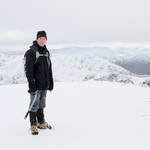 On the final day however the forecast was better, though high winds were still forecast and the met office mountain forecast said that any prolonged exposure to the wind on the hills would lead to hypothermia, this however did not stop us trying to get a good view so set out with a few escape plans in mind for in case it was too cold/windy. We headed up a grade 1 scramble/grade 1 winter route up out of Glen Coe and onto the middle of the three sisters, Geàrr Aonach, and then headed up the North East Ridges of Stob Coire nan Lochan before heading down the north ridge. All day we had fantastic views apart from 30mins or so on the NE ridge when we were in the cloud, but as we hit the summit the cloud rose and left us with fantastic views and a reminder of how beautiful Scotland can be in the right conditions. I even had to get a photo of me, so handed the camera to my dad and went and posed to get a rare shot of me on a mountain in winter gear. The decent down the N/NW ridge was stunning with great views so I placed myself firmly at the back and got my favourite photos of the trip of my parents descending the ridge with the view of Loch Leven and snow capped peaks in the background.

I am heading back up to Scotland, though this time we are heading to the Cairngorms, at the start of April with the Expedition Society of my university and am hoping for some slightly more favourable conditions in that week to enable some winter climbing and some winter walks with great views. 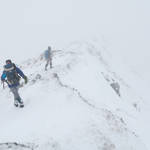 In the cloud on the west ridge of Stob Bàn 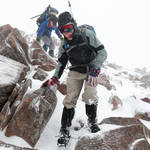 Mixed walking on the west ridge of Stob Bàn 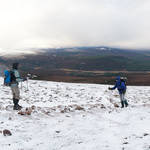 Walking up to Càrn Bàn Mór and the cloud 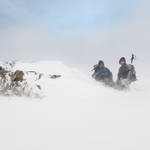 Cloud, snow and gale force winds on the summit of Càrn Bàn Mór 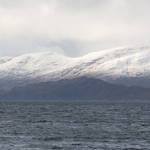 View over Loch Linnie just after a dump of snow 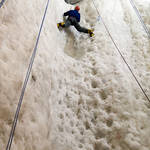 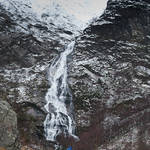 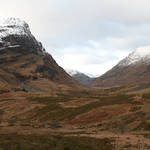 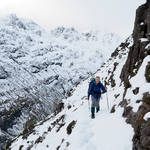 Climbing the ZigZags onto Geàrr Aonach 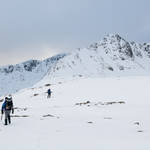 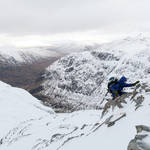 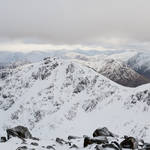 View from the summit of Stob Coire nan Lochan 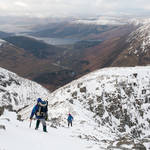 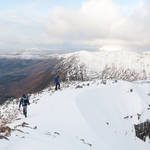 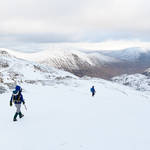 Walking down to the base of Stob Coire nan Lochan