Last week was my last week up in Glasgow before returning to university and I managed to get two days off work where I went to the Selkirk to Moffat pass in the hope that I would get some nice passes.  On the first day I arrived to lots of hill fog and rain, but I braved it and went up anyway and it proved to be a good decision as I had a great pass at the end of the day by a RAF Tornado GR4.  On the second day i went up a different hill and discovered that the weather forecast was wrong, it forecast to be sun all morning but it was overcast and then started raining for over an hour.  Finally it cleared but 2pm came and there had still been no passes and I had frozen due to a strong northerly wind.  But it was worth it thanks to the great pass i had on the first day! 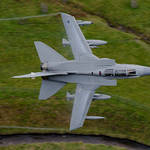