We made the decision to move back to Chamonix from Saas Fee due to a better forecast combined with there being more routes in condition that we wanted to do. The first weather window we had was meant to be an afternoon and a day before a storm came in, during this weather window we decided to head to the Tour Ronde to climb it’s classic north face. We made this decision largely due to there being a strong wind forecast, so we didn’t want to be up on any exposed ridges, and the Tour Ronde was sheltered by some of the larger mountains surrounding it.

During Monday afternoon the weather did not clear as expected, which meant that we were not able to take the gondola to Italy from the Aiguille du Midi. Due to this we decided to spend the night in the Cosmiques refuge and walk across the Vallée Blanche in the morning to climb the Tour Ronde, before walking back to the Aiguille du Midi cable car station (at no point did we think about driving through the tunnel to Italy).

After having to wait for a weather window which allowed the Midi cable car to operate we headed up to a very wet and windy cable-car station. We waited there until it closed in the hope that the weather would improve, however we were out of luck and headed out into the cloud and made the short but wet walk to the Cosmiques refuge. During the evening the weather began to clear, which gave us a very dramatic sunset as the clouds hung on in the valley but began to clear on some of the mountains. 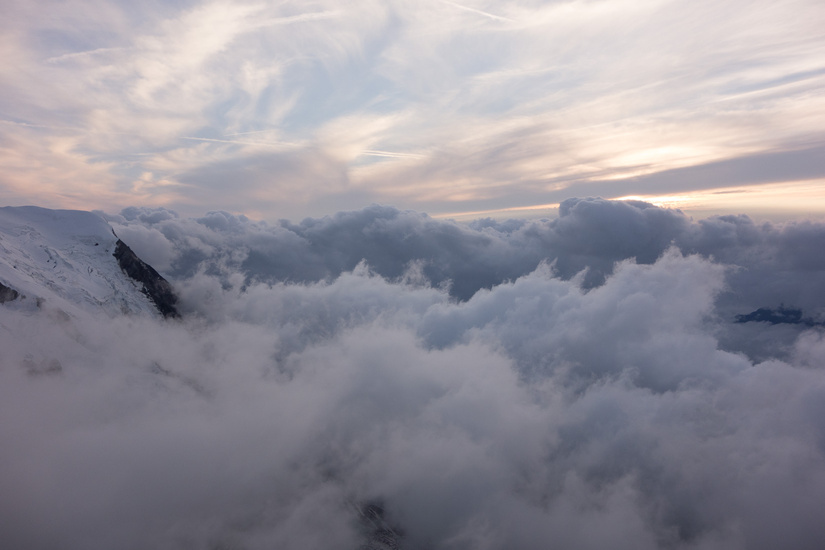 Atmospheric Sunset at the hut

At three in the morning we were the only people having breakfast in the hut which felt very odd, and after a quick breakfast we found ourselves walking down the Vallée Blanche, which feels very isolated when you are the only people there early in the morning. After navigating some interesting crevasses by torch light we arrived at the base of the north face of the Tour Ronde in the dark, this meant that walking up towards the face and beginning the climb was a very intimidating experience, as the cliffs towered above us, barely lit by the dawn light.

The snow up to the bergschrund wasn’t great as it was unfrozen with a horrible crust, however it was improving as we ascended towards the bergschrund. The bergschrund was fairly large, and with some interest we were able to flank it on it’s right hand side with an interesting but short pitch. As we were climbing the bergschrund we saw another party arrive at the base of the face, and begin to climb up after us which made us feel a lot less isolated. 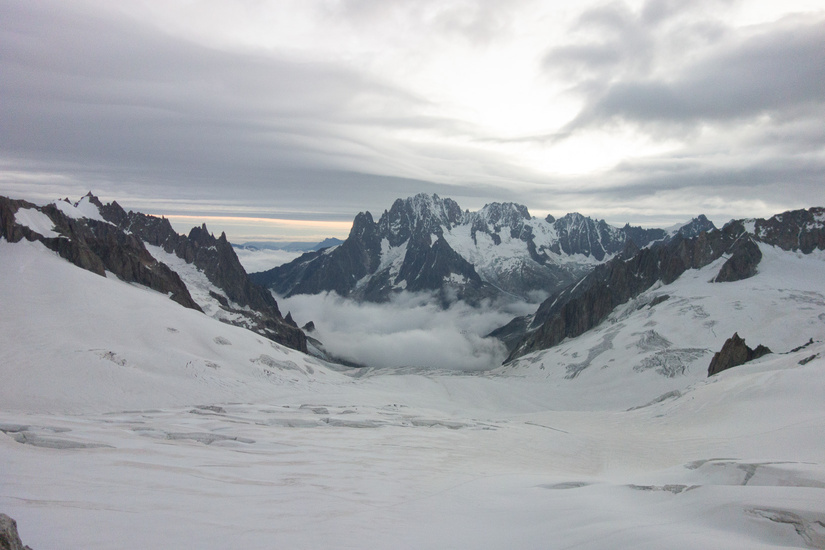 The Verte, Droites and Courtes in the morning

After the bergschrund the quality of the snow increased dramatically and we continued to simul solo up to where the snow turned into ice, from this point we pitched the route until the angle of the ice eased back off above the cruxes. We were initially climbing next to the guide and his trainee, however they were soon slightly ahead of us but it was nice to chat to the very helpful and friendly guide at the belays who was very forthcoming with route recommendations to build up to one of my ambitions.

The ice was absolutely fantastic most of the way, taking first time placements and also good screw placements where you wanted them. The route was steeper than I was expecting, partly due to the lack of snow and increased amount of time we spent on ice due to the lean conditions. It was great to be back on steep ice in the middle of the summer, especially after such a poor winter last year. I have missed the feeling of front pointing up steep ice with the satisfying sound and feel of a good ice axe placement. According to the guide we met, last week the conditions were fantastic and the slopes were entirely neve, however today the conditions were acceptable due to the lack of snow caused by some rain last week. Although I think I enjoyed the route far more due to the increased quantity of ice! 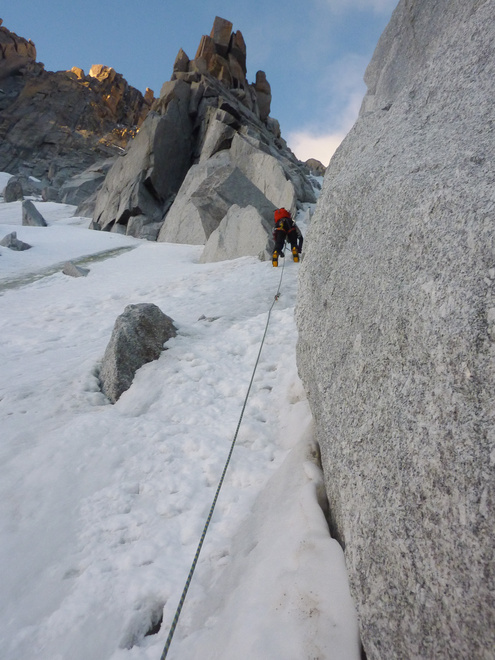 Me heading off on the first steep pitch 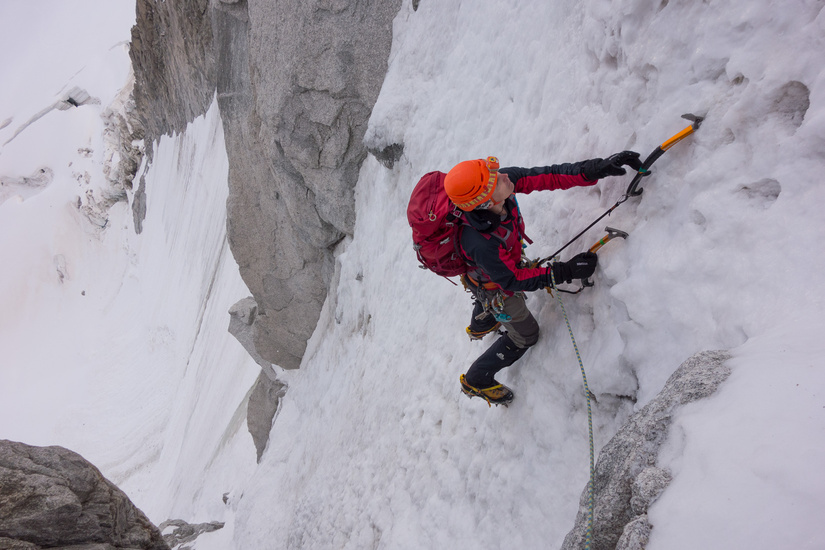 Rich at the top of the first steep pitch 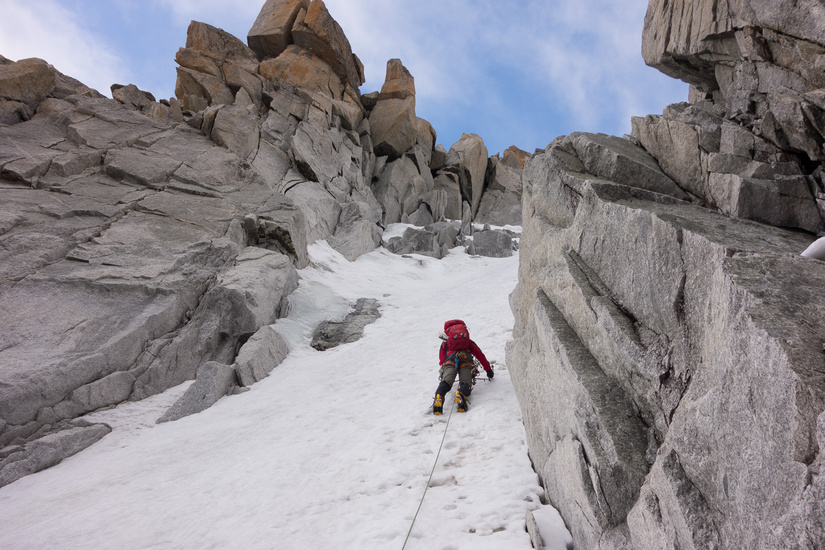 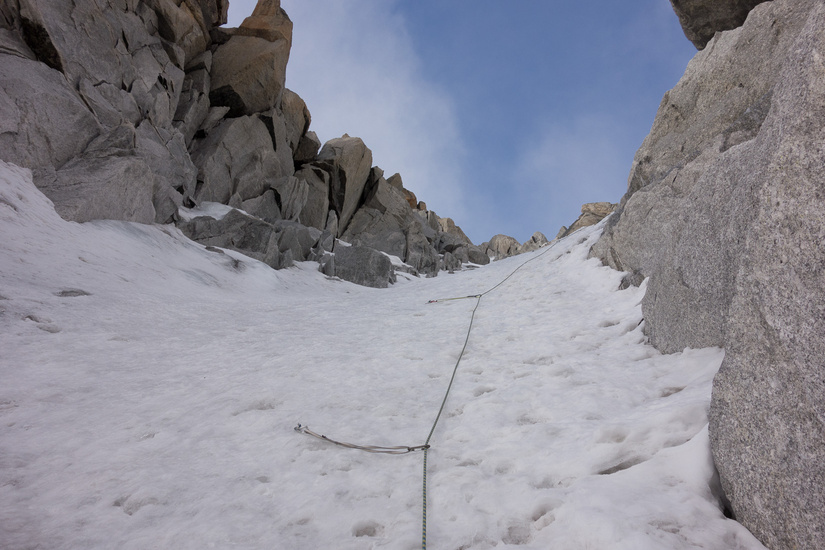 Me in front of the Dent du Géant 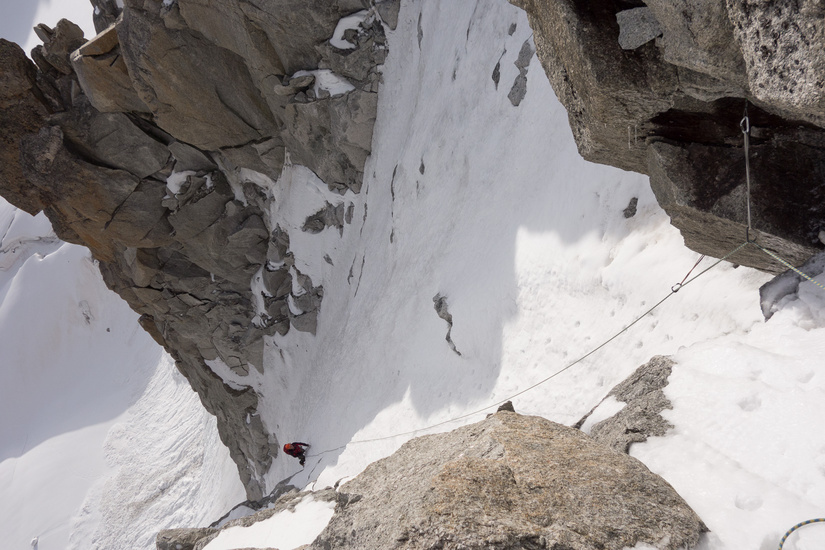 Rich enjoying the exposure on the final pitch

After four pitches of climbing we reached the end of the difficulties as the angle eased back off to around 40 degrees. For this section we simul climbed with 50m of rope between us which meant that we were able to keep some gear between us at all times but climb quickly. The snow on this section was mainly good, although some of the climbing did feel a bit insecure due to hard ice below a thin layer of snow.

Eventually we reached the top of the snow field and were greeted with a very exposed traverse up to the end of the snow section, looking down at this point was fairly exciting as you could see all the way down the the glacier at the base of the face. The guide book said that at this point we should traverse left, however the guide in front of us climbed directly up a good looking pitch of grade IV rock which we decided to follow him up. Rich did a great job at leading this pitch which had an exciting top move, after this I scrambled up to the summit where we met all the parties who were headed up by the regular routes. 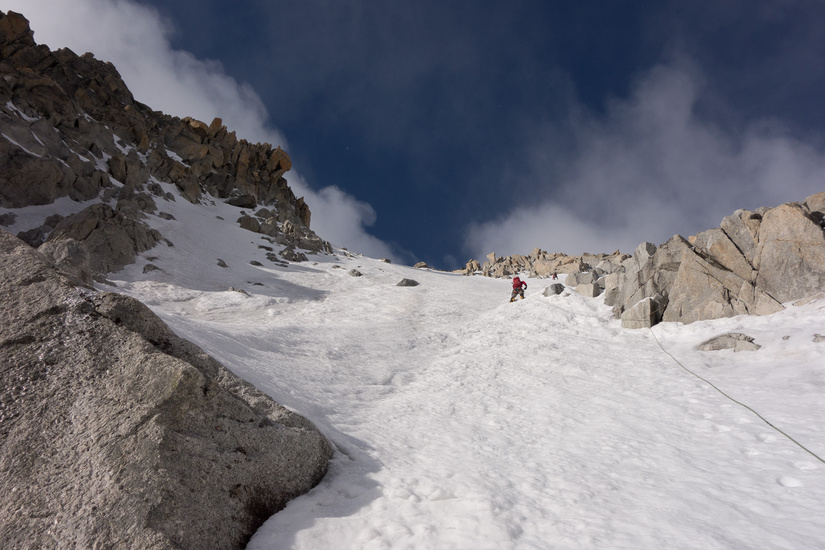 Simul climbing up the easy ground 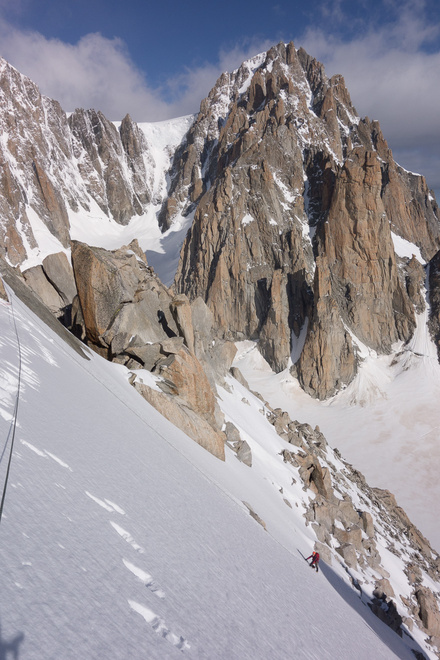 Fantastic position near the top 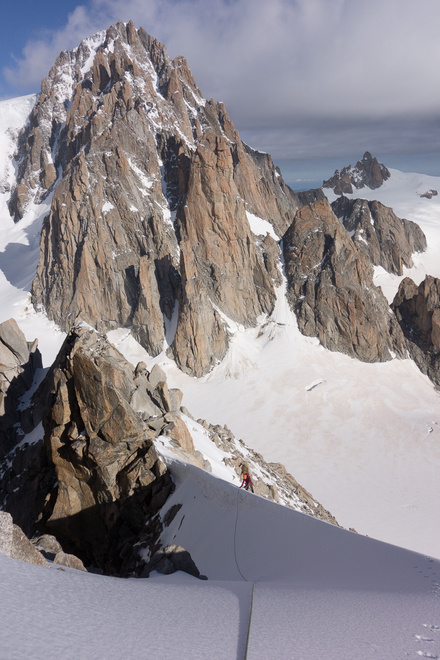 On the final snow crest before the summit 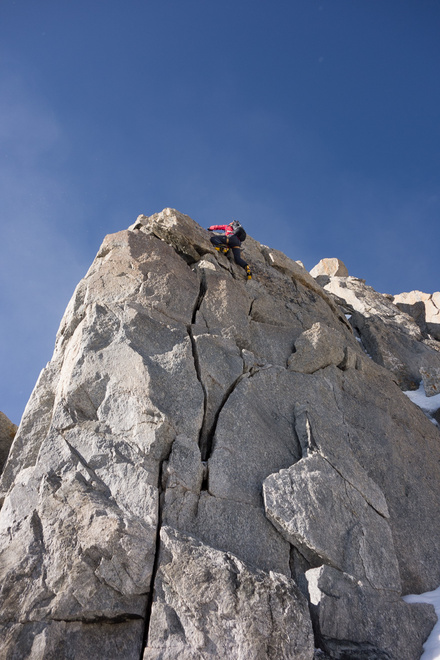 Rich leading the final rock step to the summit 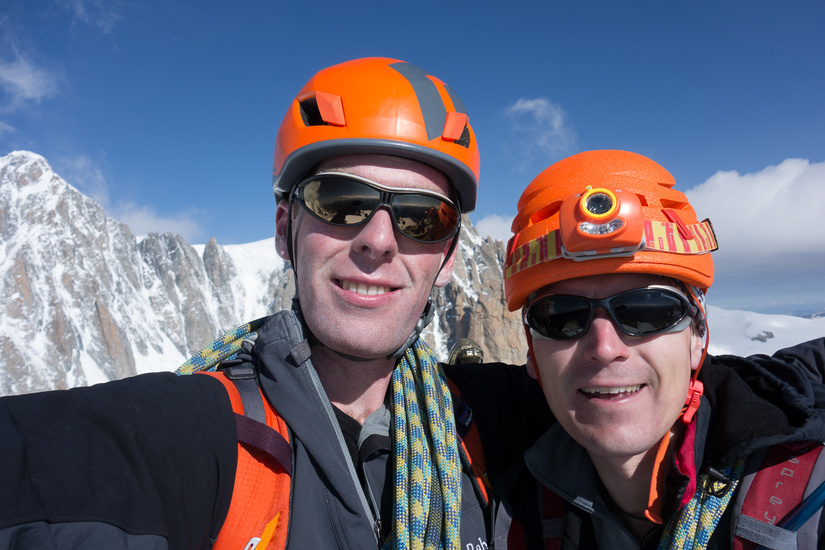 The view from the summit was amazing, although we weren’t able to enjoy it as we had to escape the strong wind which the summit wasn’t sheltered from. We were able to enjoy the view towards Italy as we descended the initial snow arete, unfortunately this enjoyment of the descent did not continue as we moved onto the Normal route, which is considered out of condition for ascent at the moment but OK for descent. It turned out to be fairly harrowing with lots of loose rock around, no protection and guides above knocking lots of loose rock down at us.

After a thankfully short descent we arrived back at the glacier, where we were able to eat and rehydrate for the first time all day (as for some reason we didn’t properly stop at the base of the route and we didn’t want to stop on the summit due to the wind). During this stop we were very disappointed to discover that the gondola from Italy to the Aiguille du Midi had closed, presumably due to wind. This meant that we had to complete the long walk back to the Midi cable car station.

The walk back to the Midi station was horrible as you can see the Aiguille du Midi the entire way back, as you lose lots of height just to have to gain 600m back up to the station. Normally when you are on a glacier, in the midday sun and out of the wind you are descending, and it is still horrible. When you are climbing 600m it is just horrible and was a case of making one step at a time for a number of hours, eventually we arrived back at the lift station totally knackered 10.5 hours after we set off 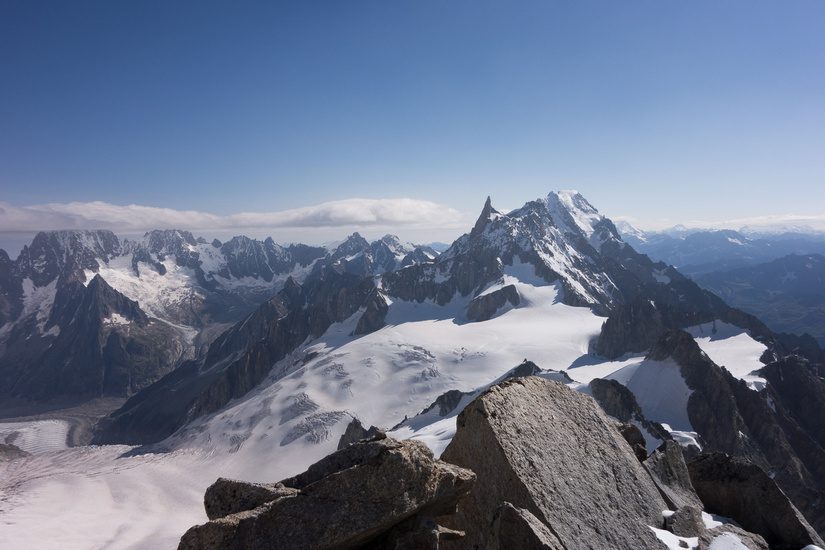 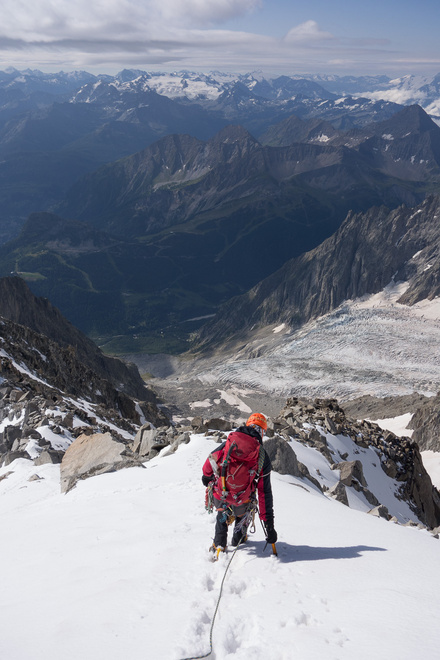 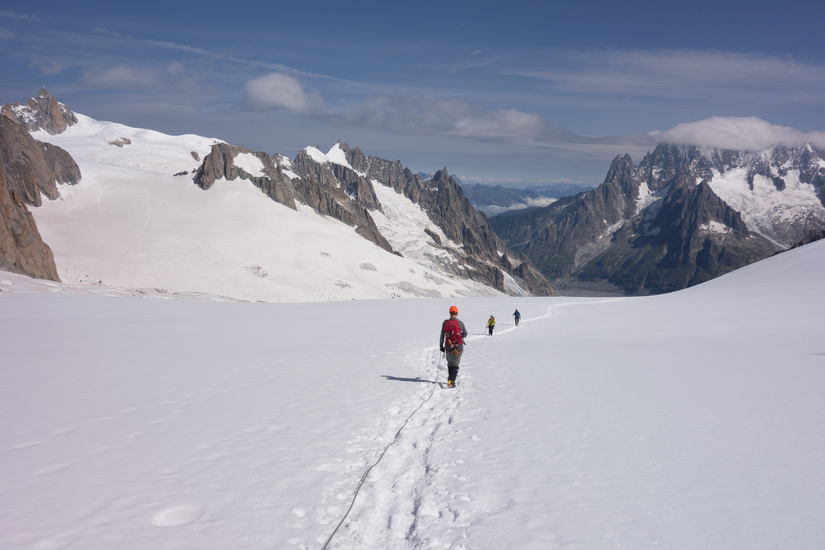 Heading across the Valley Blanche 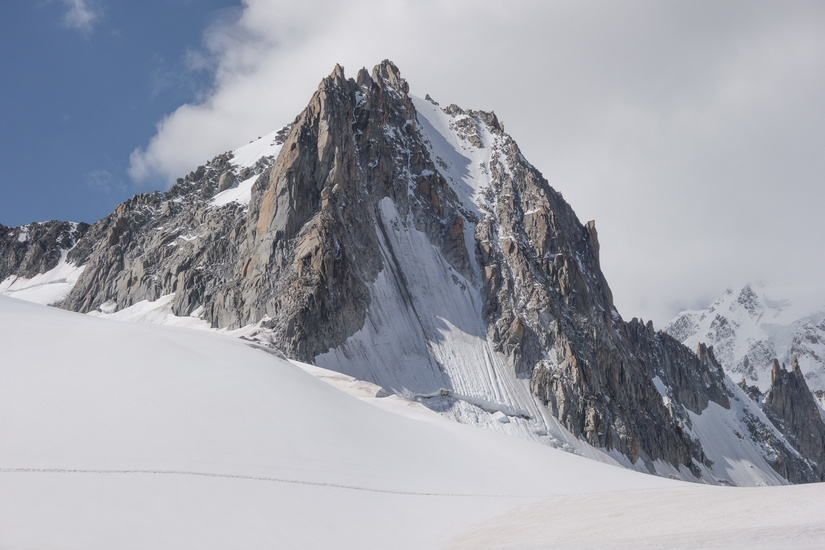