Today was certainly a plan c day, but it turned out to be a great day out. During the week I was trying to find someone to go to Scotland with me for the weekend, however all my regular partners were busy so it didn’t happen. In order to make the most of the good weather I then made plans with Neil to head up to the Peak for the day on Saturday to do some rock climbing. However early on Saturday morning the weather forecast changed to be for rain in the Peak, due to this we had a lie in and went climbing locally instead.

The main slab at Portishead Quarry is a fantastic looking bit of rock, which surprised us both and once we arrived we were very keen to start climbing. Due to the aspect of the rock and surrounding quarry we were in the sun and sheltered from the wind which was fantastic as it meant that we could climb in base layers in January which was fantastic.

We started up Pharos (HS) which was straightforwards but lovely climbing and a good warm up as I have not rock climbed since Lundy in September. 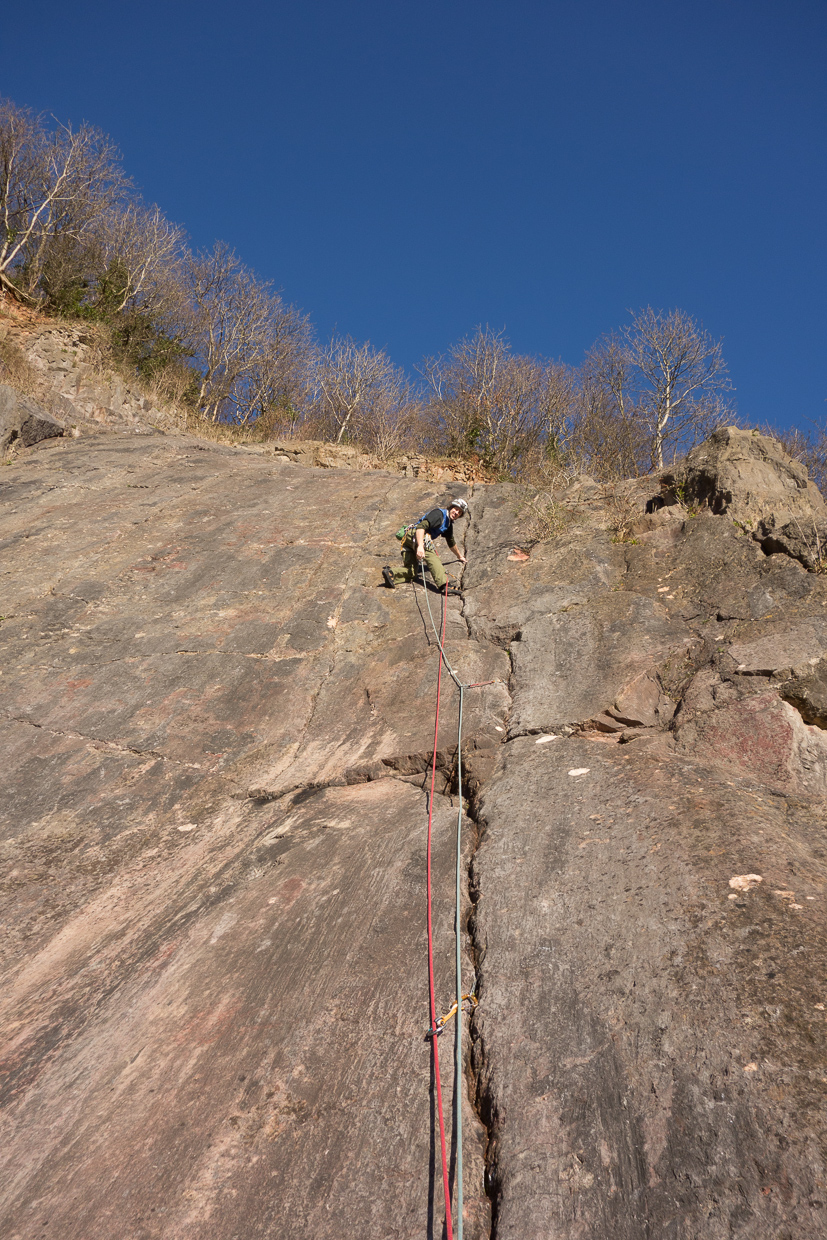 After Pharos it was my lead, and I headed up the Brink of Solarity due to it being a 2 star HVS with a guide book description of good gear. The route didn’t disappoint and was good climbing with enough gear to make the route safe, but not so much you could put gear in wherever you wanted. The climbing was varied and it was a very long pitch at around 40m, the view from the top was fantastic and a great place to belay from. 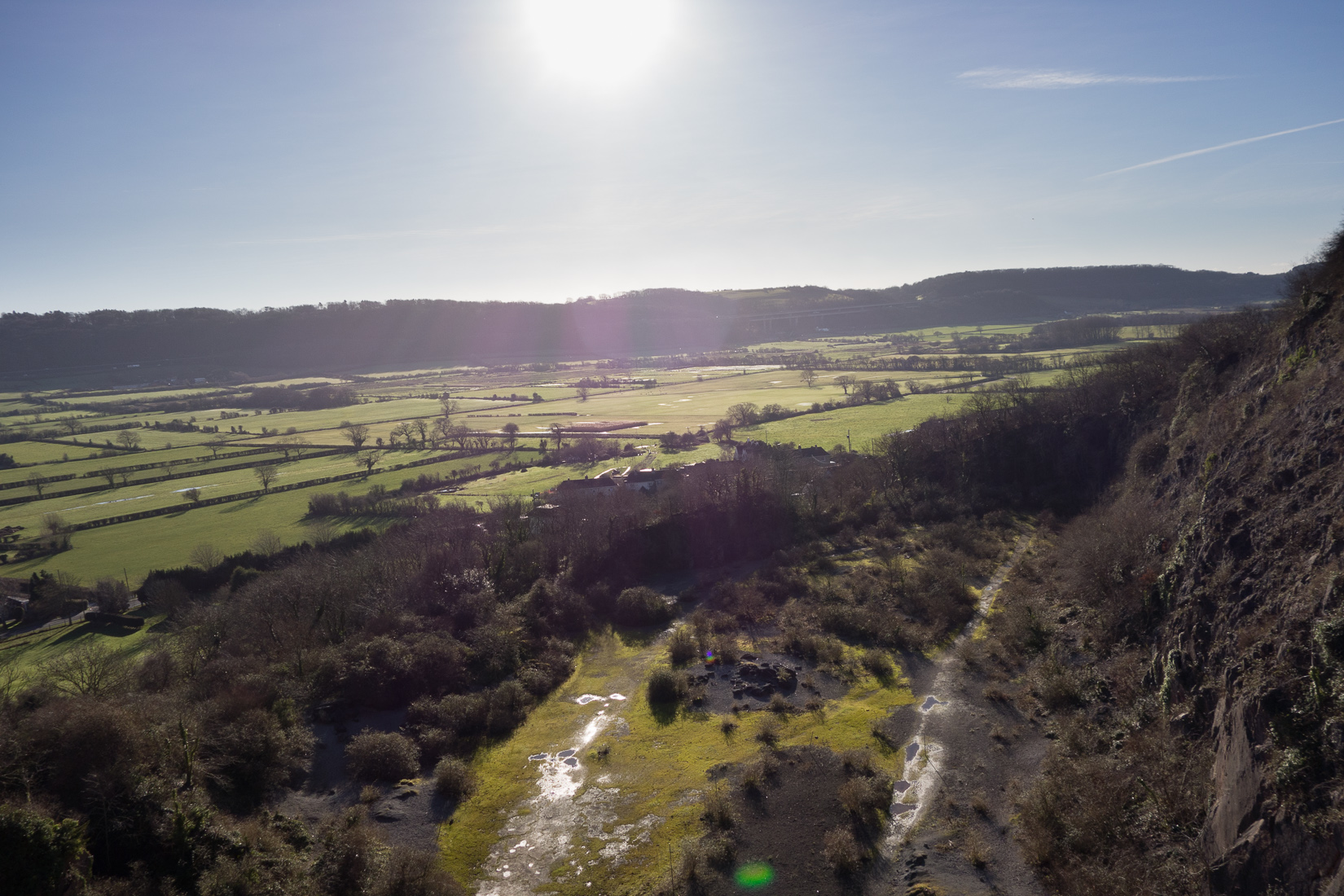 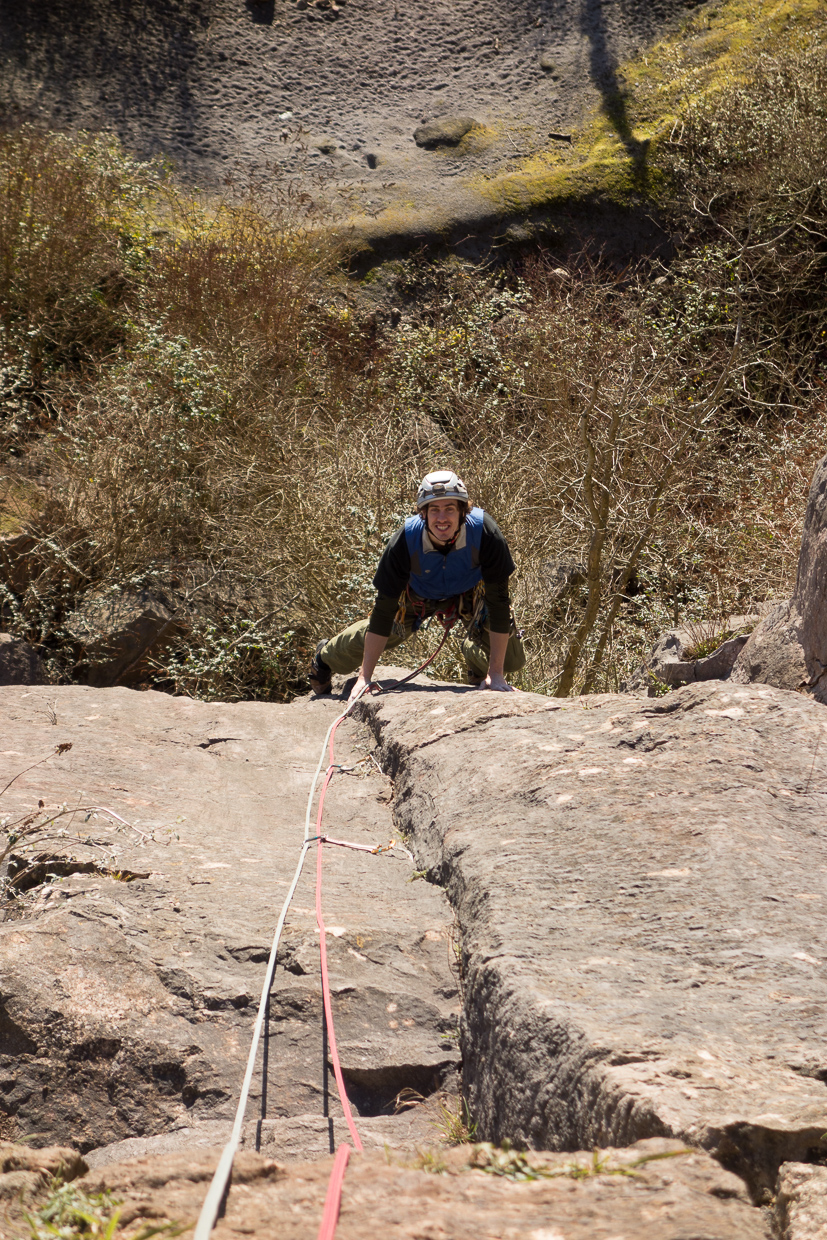 Neil climbing the final section of The Brink of Solarity

After another abseil back down Neil headed up Pickpocket, the other 2 star HVS. I elected not to do this because it was described as being bold at the start, which is something I am very cautious about since my ground fall off Malbogies in the summer. Watching Neil climb I was glad not to have been leading the pitch, however the climb lost its character as a second due to the loss of the headgame. At this point we were joined by another team which was a shame as we were both enjoying having the crag to ourselves! 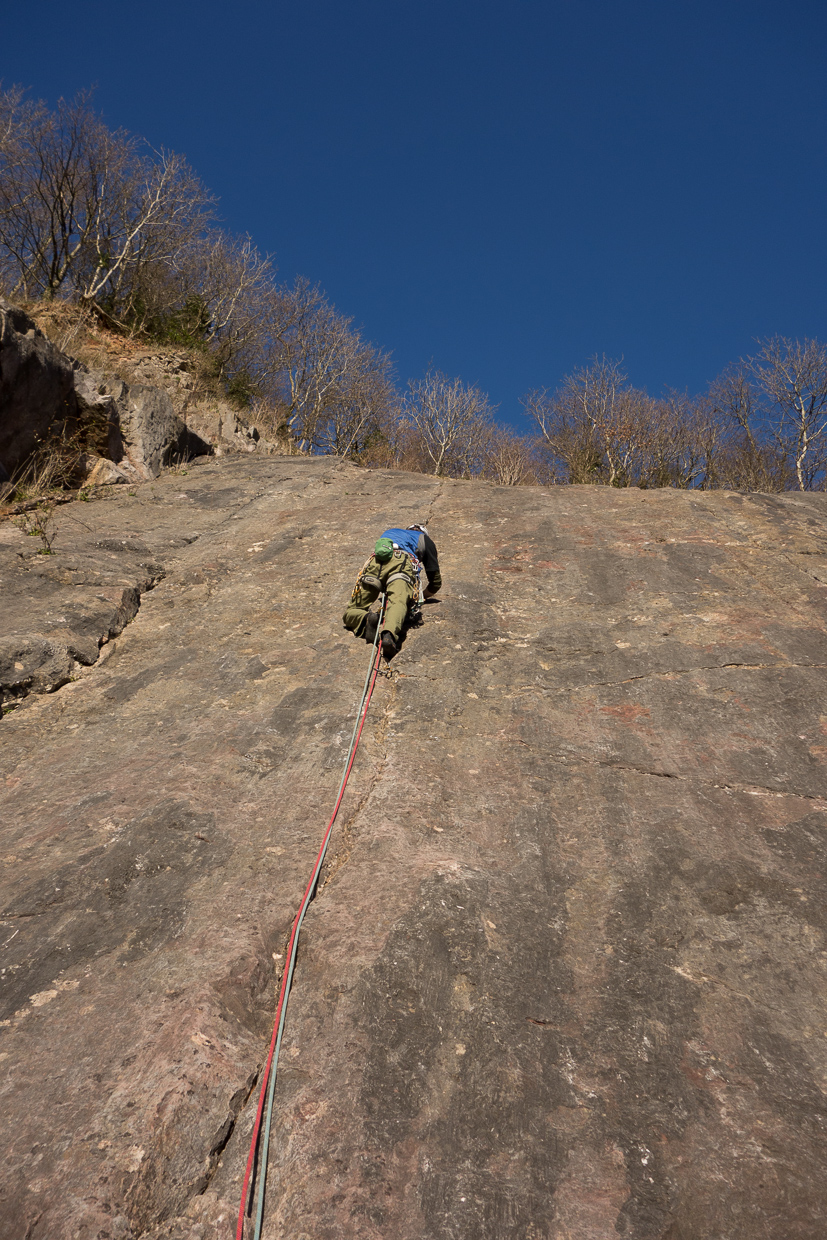 Neil just past the bold start of Pickpocket 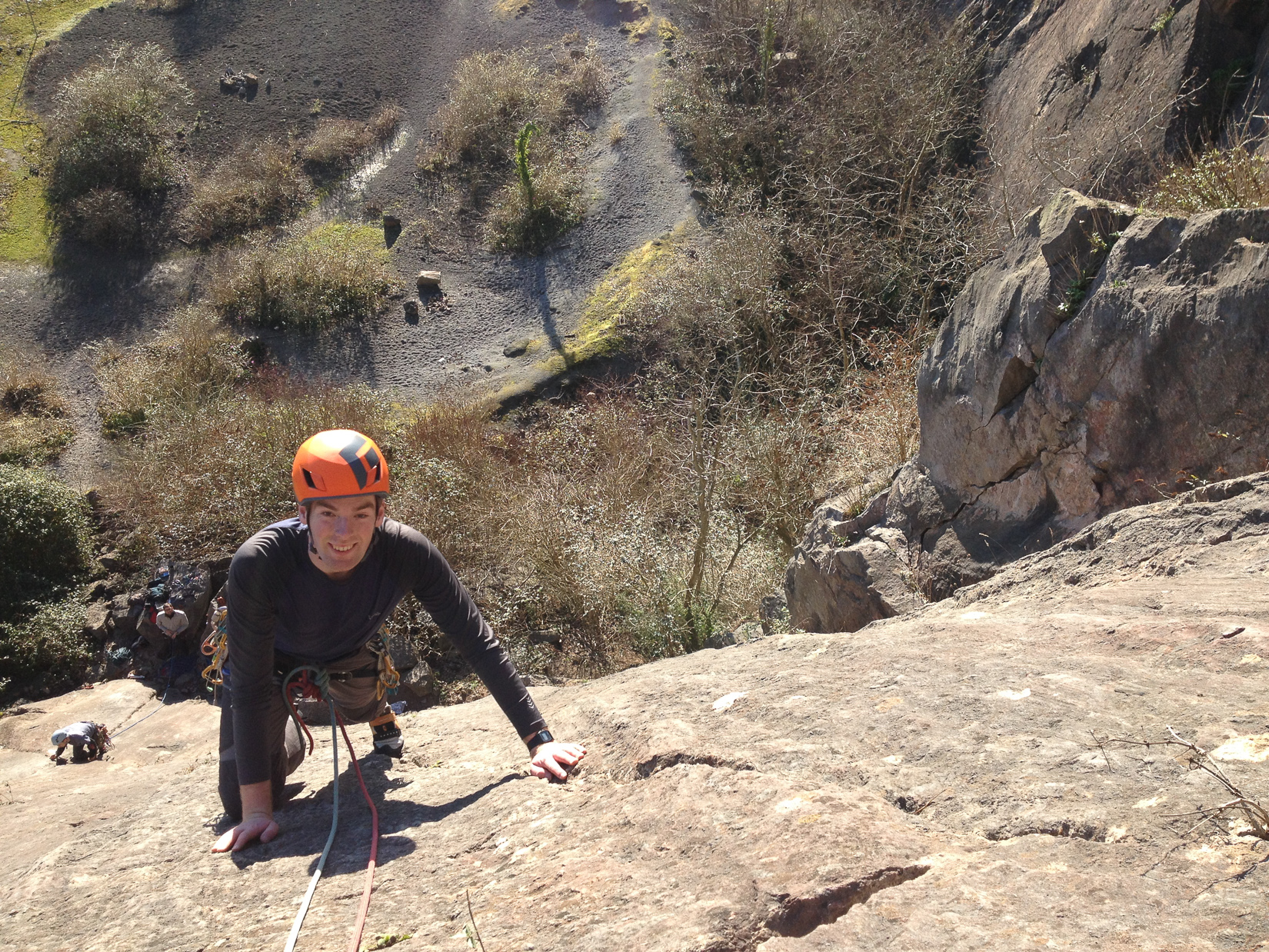 Me at the top of Pickpocket 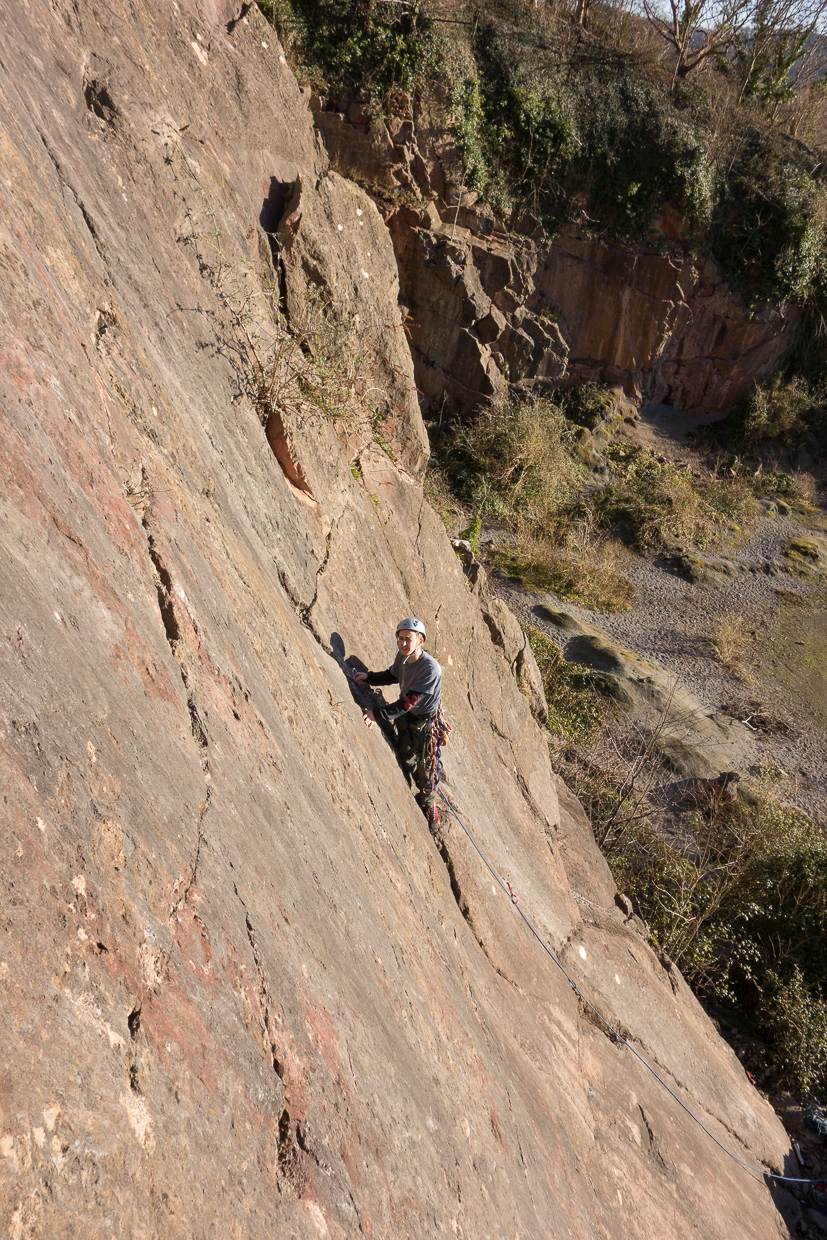 At this point I decided to have an attempt at climbing Approaching Maturity, an E2 5b, however once I got off the ground and made a few thin moves I lost my bottle due there being no gear for a fair few meters and not being able to see the sequence from below. After I had managed to down climb I headed up the final HVS at the crag, The Baldest, which turned out to be very scary. The start of the climb is very bold if you don’t add side runners (I didn’t). In the first third of the climb I placed two pieces of gear, however it was terrible and I am not sure I would have sat on it, let alone fallen on it. Past this piece of gear the next piece was the same height again, and I was very aware that a fall would probably have meant hitting the ground, which certainly focussed the mind! Once I got to 1/3 height there were a few good runners before some steady climbing to the top. The climb certainly felt much harder than the other two HVSs at the crag and was definitely type II fun! 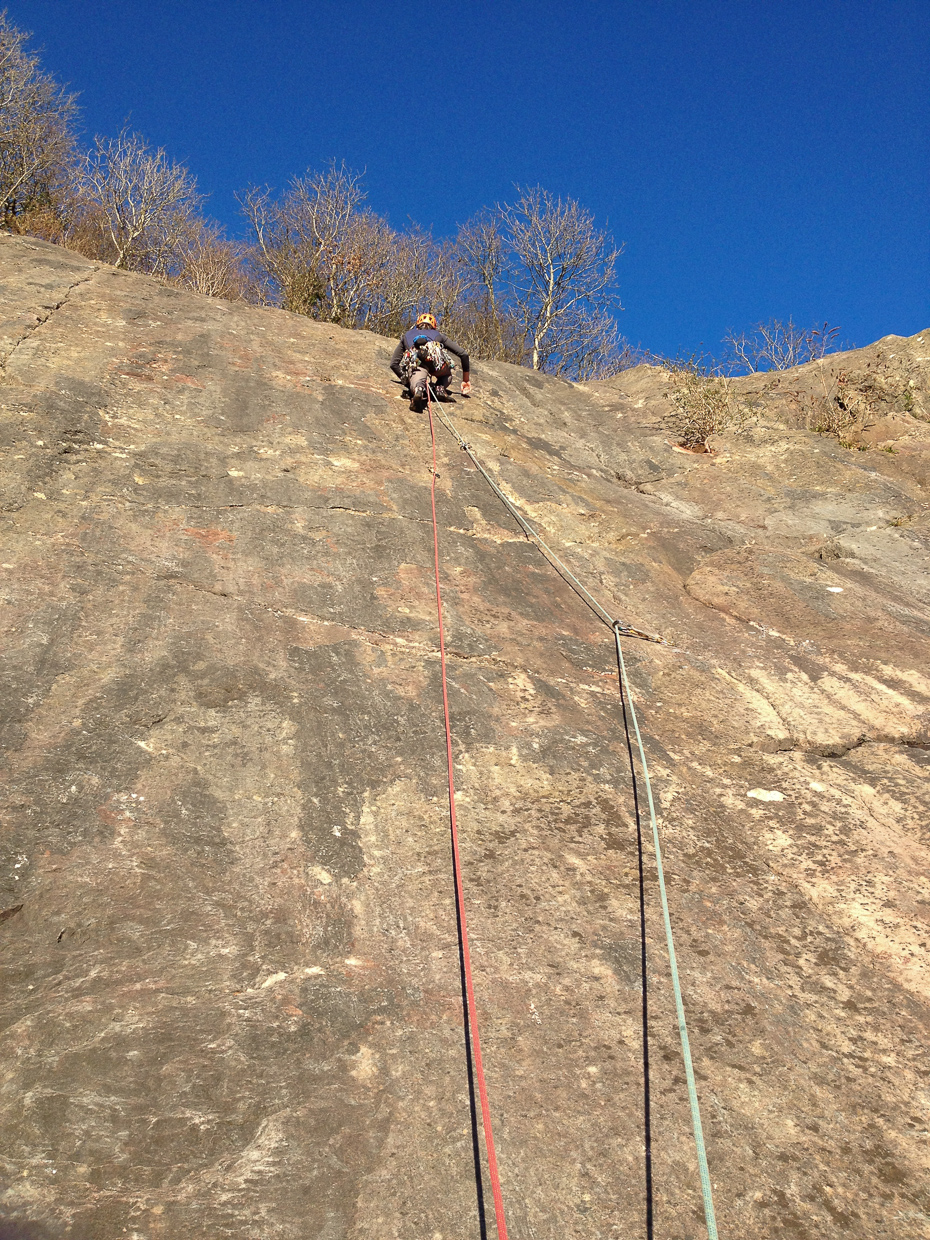 Me climbing The Baldest 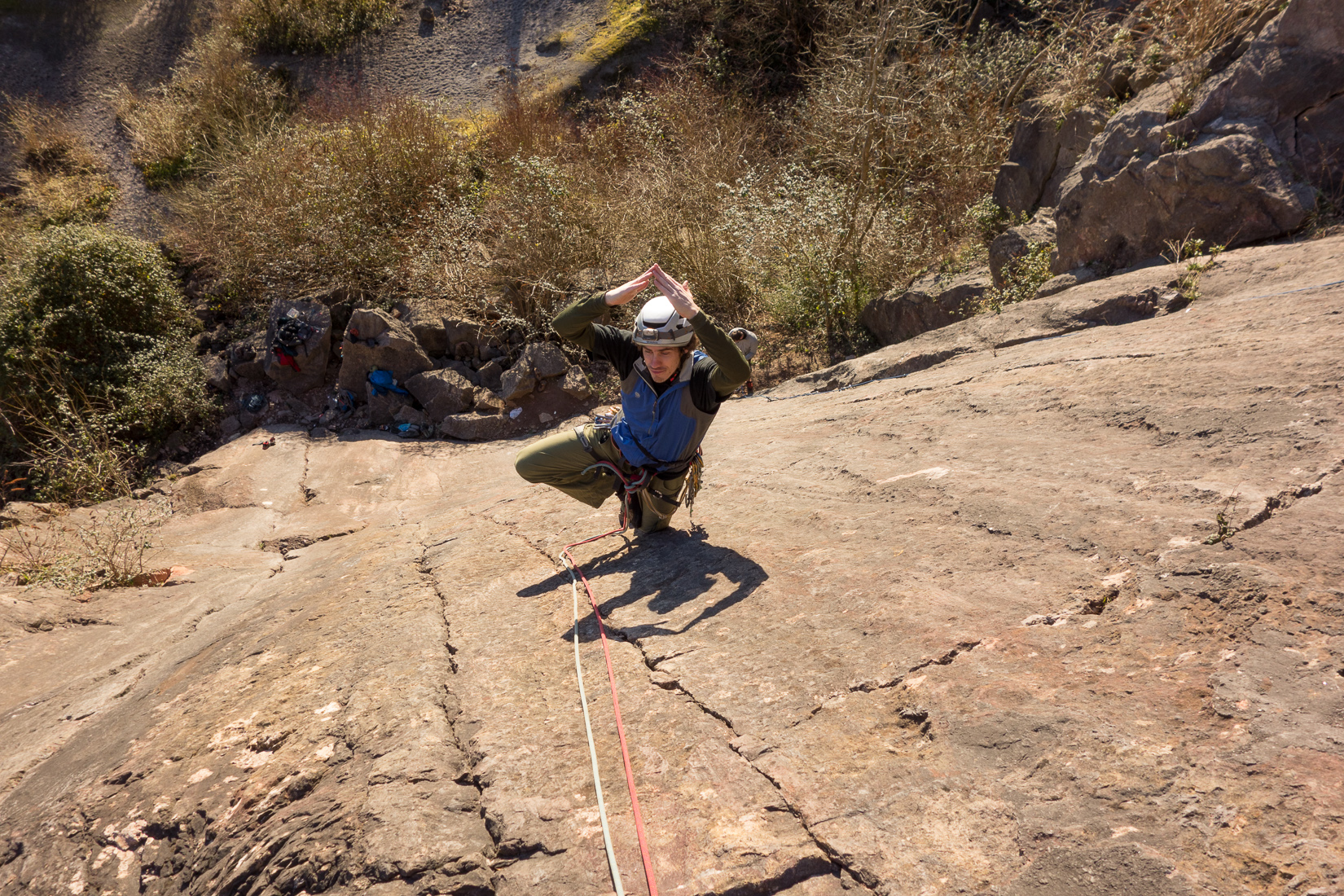 Neil fooling around near the top of the Baldest

After this Neil had a go at the E2 and got slightly further than me, but then decided to back off as well. Due to wanting to do another climb Neil then decided to climb the vegetated corner crack which turned out to be One Rainy Wish. It was an interesting climb with the need to avoid pulling on suspect rock and avoid vegetation, however there was some ok climbing at the top.