First Pembroke Trip of the Year

With a bit of a contrast to last weekend in Skye on the Cuillin Ridge, I spent Saturday rock climbing on Pembroke’s fantastic sea cliffs with Neil. It was a glorious day with a warm sun and a chilly breeze however the crags were mostly sheltered from this.

With less than ideal tides and bird bans we headed to Stennis Head in the morning to do some non tidal and non bird banned routes. I started up Bludgeon which was a lovely HVS 5a corner which was quickly climbed to the top without much difficulty which I was very pleased with as I hadn’t lead a trad route since January and in February I only rock climbed twice. After this we abseiled back down and headed for the ‘Merchant of Stennis’ however in Neil’s haste he ended up leading up the E5 crackline to the left of the route called Fetish. He made swift work up to and past the crux but ran out of energy for the final section. After a few more attempts, including having to repeat the crux he escaped right into the E3 for a few moves before heading to the top. I followed nervously up the line and was pleased to climb the whole route only taking two falls on the tricky crux section. 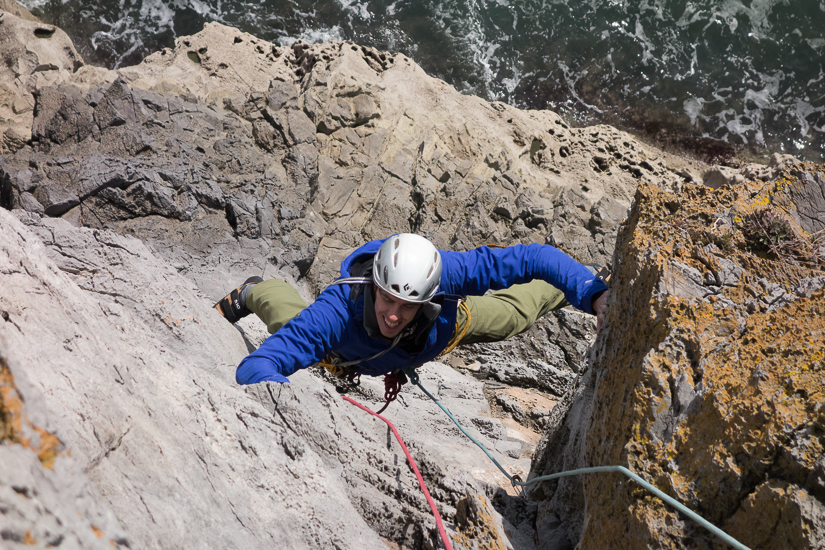 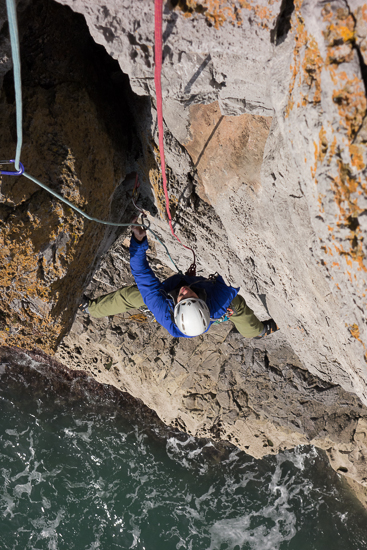 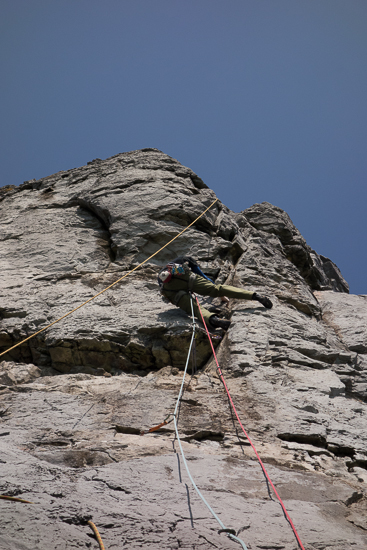 We then headed down onto the main area of Stennis Head and I started climbing ‘Cool for Cats’, at the point where Cool for Cats and Manzoku split I decided to have a bit of a moment and dropped almost two krabs worth of nuts down onto the ground, so lowered off, collected the nuts, pulled the ropes and started again. I found the climbing very sustained but brilliant and felt in control (just) all the way up until the final hard section of climbing where I started to get very pumped. After fiddling in a micro wire and resting as well as I could I committed to the sequence and thought I had made it when I got my hands up onto the final lip, however I ran out of energy before I could get the good hold just above. Thinking the wire below me was as good as a micro wire is ever going to be I shouted “take” and fell off. I was very wrong about the gear being good as it turns out, and the pieces below that, I remember feeling multiple pieces of gear rip while I was falling and having time to think “Oh Shit, I am going to hit the ground”, thankfully I stopped about 5m off the ground with Neil in the air just below me with around three pieces of gear by my belay loop having ripped! As I fell about 5m from the top of a 35m route I fell a good 20m and was very lucky not to hit anything on the way down! After this we pulled the ropes and Neil made quick work of the route leaving me to second it, which as a second I sailed up. Unfortunately I had to leave the nut which caught my fall as it was well and truly jammed in. Neil also found the protection on the upper part of the route not to be great, however after seeing what happened to me put lots of gear in assuming lots of non ideal placements would equal one good one.

We then headed over to Bosherton and climbed the brilliant Keelhaul, an E2 5c which Neil lead fairly quickly but with my fall in mind placed alot of gear when it was available! It was a brilliant lead with some committing climbing following an improbable line up to the overhang. Ignoring my fingers hurting it was a brilliant route and I was very pleased to get to the top without falling off, this made the route my first E2 which I have seconded onsight. 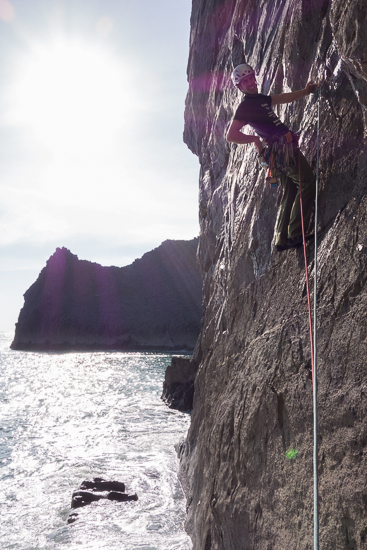 Due to not wanting to end my days leading on that fall we headed back to Stennis Head as the sun was setting and started out on Riders of the Storm, a HVS 5a traverse line. It was a brilliant line but in hindsight a committing traverse line, while really tired was not the best idea as the sun was setting. The first half of the route was really bold and there were places where a fall really was not an option, I soon made it to the point where the guide book says to use an undercut to move left to a large flake. This move looks improbable until you commit, after lacing the route with gear I set off and due to being tired and running out of energy reached for the flake too soon and ended up all twisted up with my hands in the wrong place, which after a fight lead to me barndooring off the route. When you are hanging a few meters above the sea on a traverse line, in free space with the setting sun everything suddenly feels very serious. After prussking back up to the gear, with the thought that if I fell again it would be dark before we finished I set up a belay and Neil then climbed the rest of the route. However, as it was a traverse seconding is still very serious, but all you have to worry about is getting the gear out rather than placing it. By the time I got to the end of the climb I no energy left, my hands were covered in blood and I was very glad to be at the top and heading to the pub.

Today I am feeling very sore having used muscles which haven’t been used recently but I am very much looking forward to my next climbing trip, however I might place a few extra pieces of gear if I am not 100% convinced by a placement next time! 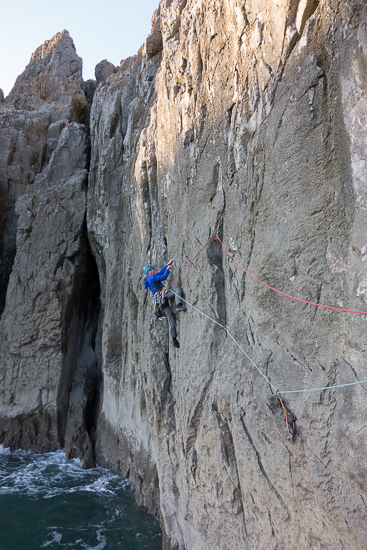 Me on Riders on the Storm 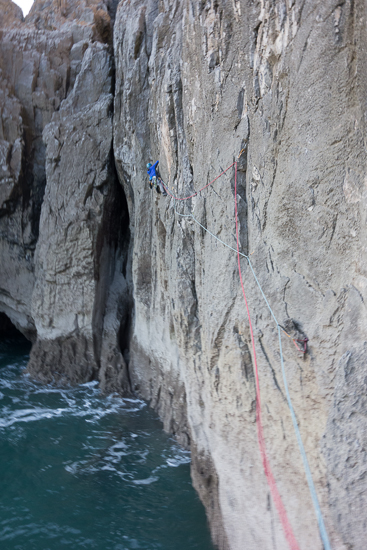 Further along the route 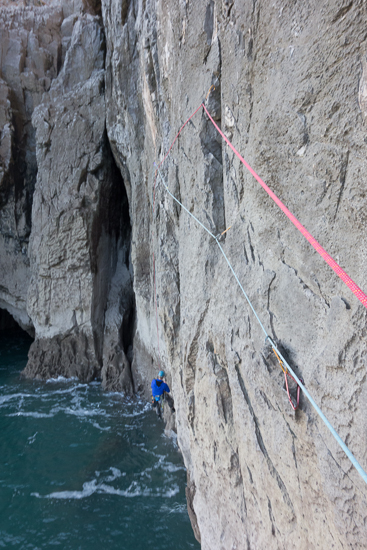